Webflow, a cloud-based no-code website development and hosting platform used by major enterprises such as Allianz, Rakuten, Zendesk, and Dell, has raised $140 million in a series B round of funding co-led by Accel and Silversmith. Alphabet’s CapitalG growth fund also participated in the round as a new investor, with Webflow now valued at $2.1 billion.

For context, Webflow was reportedly valued at no more than $400 million at its $72 million series A round 17 months ago. This highlights a rapid year of growth for the San Francisco-based startup, as it doubled its paying customers to 100,000 and launched a new enterprise product replete with single-sign on support, security audit compliance, AWS-powered advanced DDoS protection, uptime monitoring, and more.

The web has been awash with website-building tools designed for non-coders since its earliest days, and the tools have become increasingly sophisticated, creating a reported $6.5 billion market in the process. The likes of NASDAQ-listed website builder Wix is currently flying high, with its shares doubling over the past year to create a $15 billion company, while well-funded Squarespace is also currently gearing up to go public.

Webflow, though, has set out to separate itself from the pack with a focus on professional websites that can be built entirely from a visual canvas. “We’re in an entirely different professional league,” Webflow cofounder and CEO Vlad Magdalin told VentureBeat. “Webflow doesn’t rely on templates, but rather allows any kind of professional website to be designed from the ground up.”

There is also, of course, the omnipresent WordPress, which is easy enough to carve a half-respectable website from through its array of themes and templates, but any customization will usually require some form of coding, be that in HTML, PHP, CSS, or JavaScript.

Magdalin argues that the company’s closest competitor is, in fact, hand-coding. “Usually, when companies or freelance service professionals switch to Webflow, they are not switching from a product, but rather from having to rely on a developer to manually translate design files to code,” he said.

Founded in 2012, Webflow in its original guise was focused more on prototyping or simpler low-functionality websites, but today it’s used by businesses of all sizes across the spectrum. Dell, for example, uses Webflow for internal websites that host content such as style guides, while Dropbox’s e-signature division HelloSign uses Webflow to designed, develop, and host all their marketing pages. Many others also continue to use Webflow for rapid prototyping or to launch smaller microsites or landing pages. 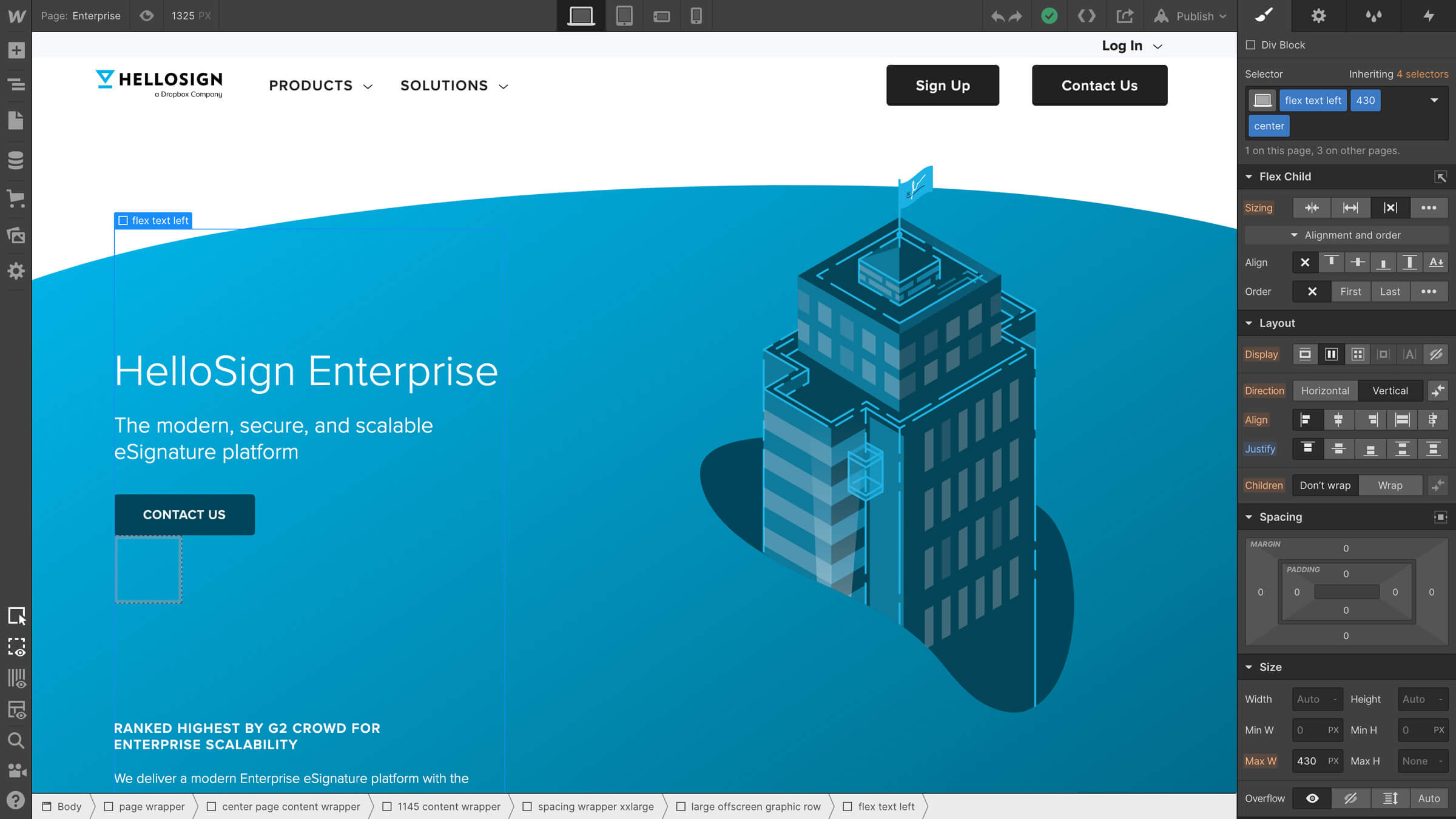 Above: Dropbox-owned HelloSign uses Webflow for its marketing pages

At its core, Webflow is designed to circumvent all the typical time-consuming steps involved in getting a website from design and onto the web. It’s “design” then “publish,” while development teams can use Webflow’s APIs to hook the site up to various external tools that are integral to modern websites, such as Stripe, Airtable, Hubspot, Mailchimp, Zapier, and Segment.

But why would a deep-pocketed enterprise use Webflow versus investing in their own development team? According to Magdalin, the shift mirrors changes made elsewhere across the technology realm over the past decades: it’s ultimately all about efficiency.

“Enterprises used to build data centers for storing data, but you now see most forward-thinking technical teams use cloud infrastructure — not because they can’t build data centers, but because it’s far more efficient to rely on cloud providers,” he said. “We believe a similar path will happen for manual coding in areas where visual tools can do the job just as well. Design and development teams will pick the platform that lets them build the best web experiences in the fastest and most sustainable way – for the same reason that most enterprises now use tools like spreadsheets, which are arguably under the ‘no code” umbrella, for workloads that decades ago were solved with big development teams.”

Prior to now, Webflow had raised nearly $75 million, and with another $140 million in the bank the company is well-financed to double down on its product development and expand deeper into the enterprise realm, positioning it alongside a growing array of tools in this space from the big tech giants. In the last year alone, Amazon’s AWS launched a no-code app development platform called Honeycode, while Google acquired enterprise-focused AppSheet.

This so-called “citizen developer” trend has been unfolding for some time, with Gartner noting in a 2019 report called The Future of Apps Must Include Citizen Development, that by 2023 citizen developers within large enterprises will outnumber professional developers by at least four times.

However, there is no escaping the simple fact that Webflow and its ilk still hold real limitations in terms of building more full-featured web applications without using third-party integrations and / or engineers. This is partly what Webflow will use its funding for, as it looks to move beyond website development and into “more powerful web applications,” as the company puts it.

There is a host of third-party no-code tools that designers can use to extend their Webflow-powered websites’ functionality, such as MemberStack for creating logged-in experiences and enabling payments; Jetboost for enabling real-time search and filtering; and Weglot for making websites multilingual. And this helps to highlight how far Webflow has to go in terms of becoming a truly self-contained entity for web apps.

“Right now, if you want to build truly interactive applications or membership sites with a logged-in experience, you need other tools in addition to Webflow,” Magdalin said. “However, these no-code tools are still in the early innings, and the vast array of products and services we all use today still need engineering teams to implement. There is a good amount of complexity that can be achieved with our integrations, but there’s definitely a long road still to go to solve more complex problems. This funding round will help us invest more into our product development — and our ecosystem — as we look to expand the use cases we can serve.”

Magdalin said that the company’s next focus for creating “more complex applications” will be to enable Webflow users to build a logged-in experience natively, a feature it plans to roll out later this year. This will open the doors to a wider array of website types, spanning paid membership services, subscriptions, and even enterprise intranets.

Additionally, Magdalin said that the company plans to introduce some machine learning smarts to the mix, to help designers build their sites. “Since we now have millions of well-structured sites created on Webflow, it’s possible to create models that aid creators in making design decisions that can lead to higher converting landing pages and things of that nature,” he said.

What’s clear in all of this is that the no-code / low-code development market is gaining steam. A recent market research report suggests that the global low-code development platform market is currently pegged at more than $10 billion, and could rise to $187 billion by 2030. One factor influencing this drive is that every company is now effectively a software company (to varying degrees), while simultaneously there is a software engineering talent shortage — opening up the web development process to less technically skilled people will go some way toward addressing the gap.

“There are so many jobs, and so much opportunity in web-based business,” Magdalin said. “People cannot ‘learn to code’ fast enough, and there’s much more demand for software-enabled solutions than there are new software engineers being trained, which has led to a boom in these no-code development tools.”