You are here:
Home / Neon White – Every Shortcut Location For Mission 7: Reckoning

While Neon White is fond of mixing things up with every new mission, and keeping you on your toes, the seventh mission doesn't really change the type of shortcuts you will be engaging with. Sure, there are a few new enemy types, which the stages are structured around, but the shortcuts themselves will look largely familiar, as you really don't have any new tools to work with.

That being said, a few of them do feel a touch more demanding. It feels like the game is starting to have expectations of your competency at this point. So, expect to make more tough shots, and don't be surprised if you have less time to make them, throughout the course of using these shortcuts. Thankfully, you have been through this gauntlet many a time at this point, so we are confident that you will succeed! 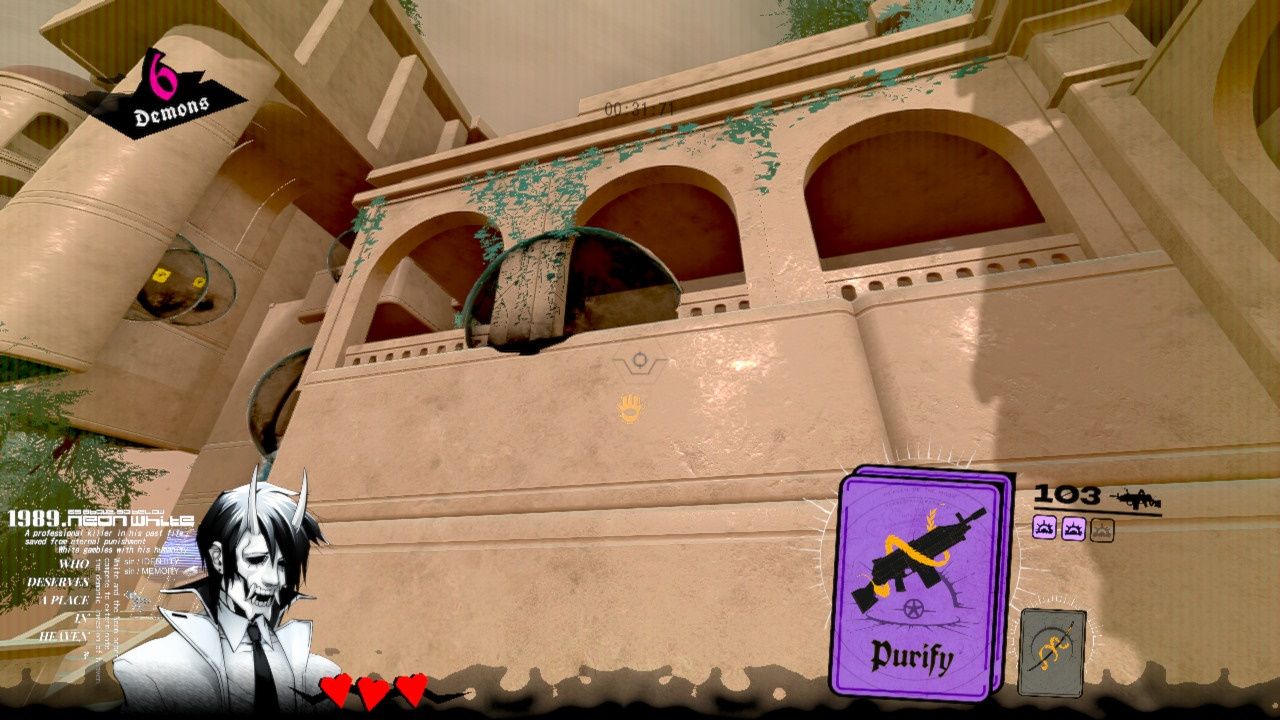 When you get to the section where you encounter two of those ammo replenishing demons in a bubble, use the assault rifle's discard ability to explode both of them while also doing a bomb jump. 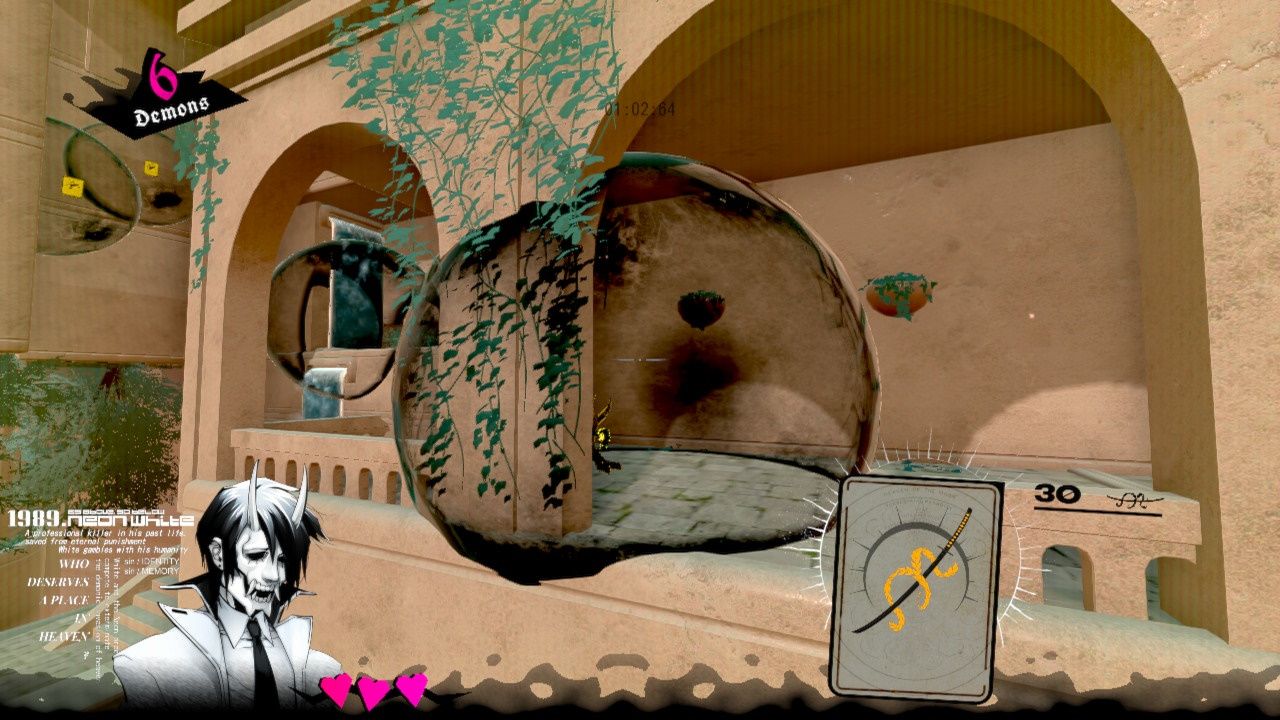 However, don't do the bomb jump to your right (which is where the level is guiding you), do it so that you are propelled directly into the pathway with demons ahead of you. This is a quick little shortcut that rounds the corner and cuts all the fat. 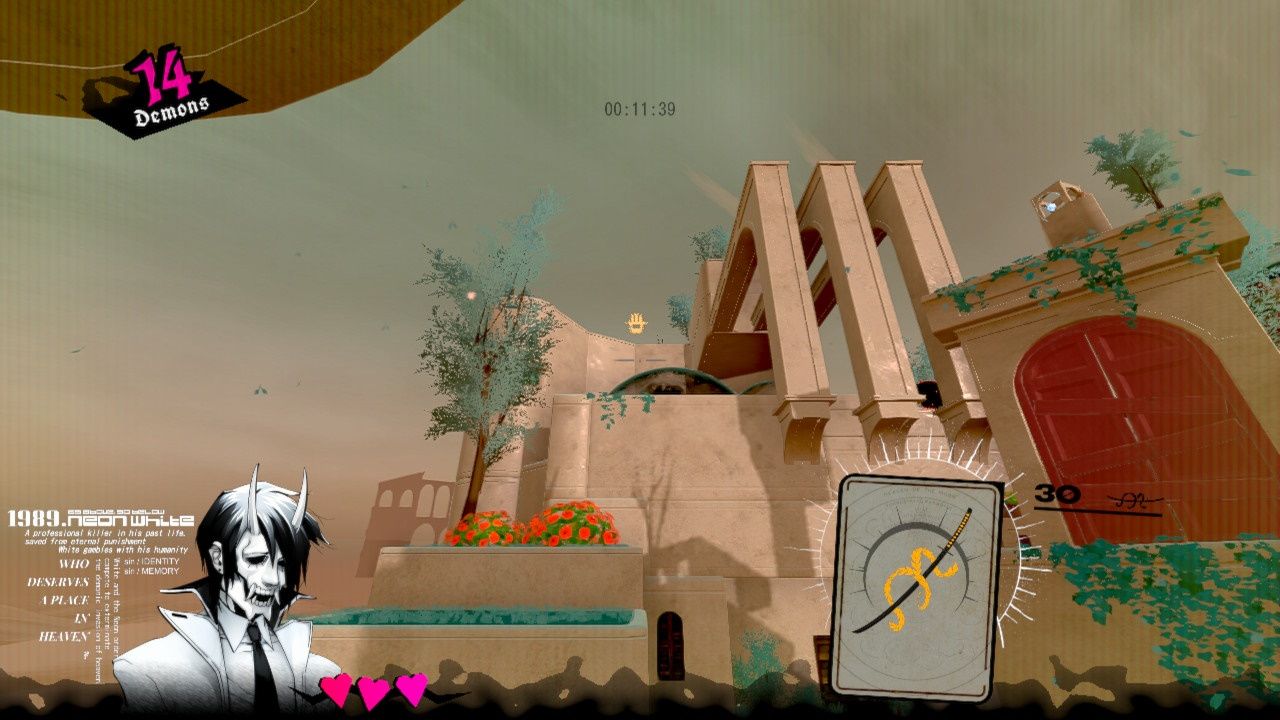 In the section where you get two assault rifles and are surrounded by two groups of demonic heads, use the discard ability to explode the group on your right, but do a bomb jump on the group to your left. This is a tidy time skip that will help you cut off a couple of seconds from your completion time. 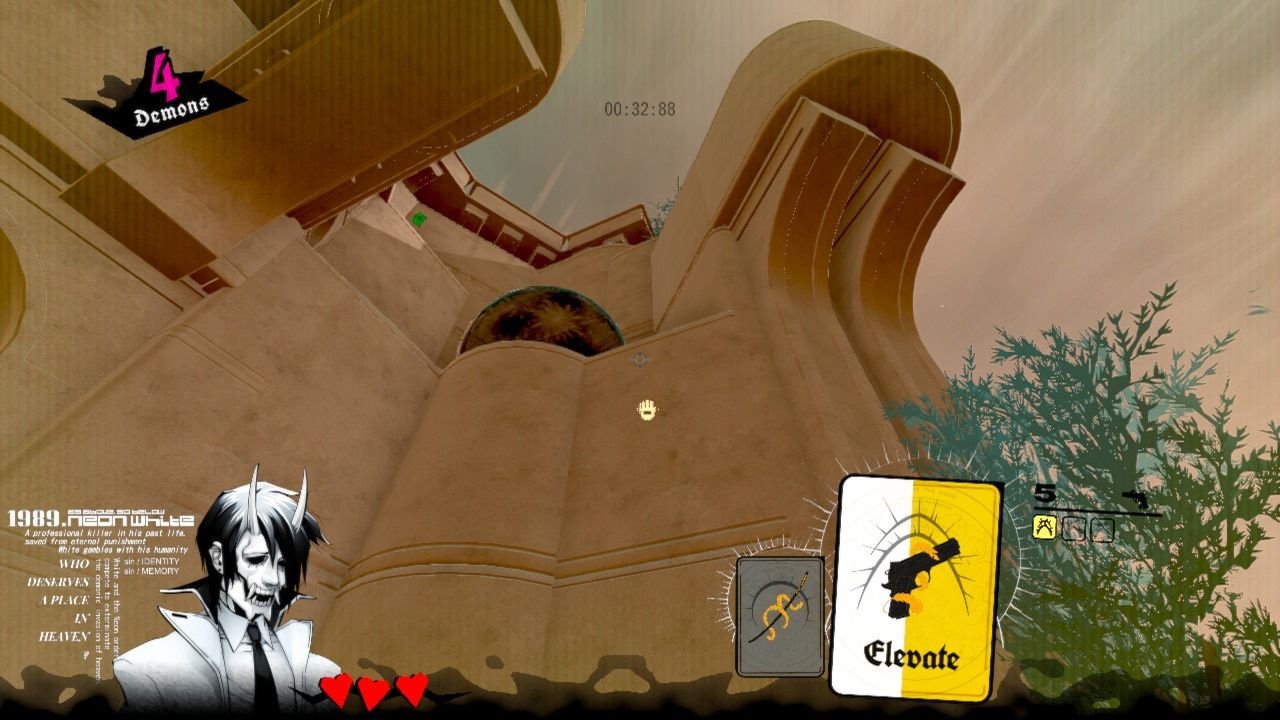 After completing the successive slam sections, you will face a final one that features two sets of tripwire demons taking aim at a single shield. One of the groups of tripwire demons is sitting beside a pair of explosive barrels. Do not shoot the barrels! 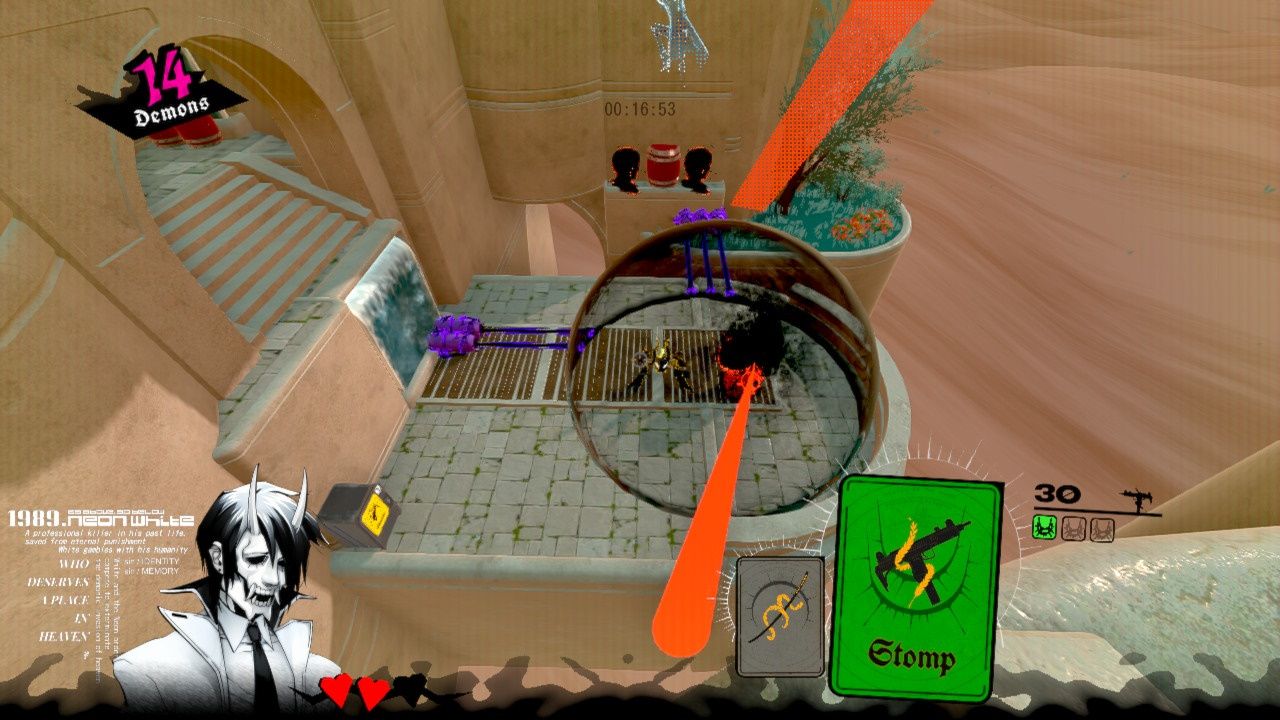 Instead, shoot the tripwire demons to the left, slam down on the force field left of where the other set of tripwire demons are pointed, and then perform a bomb jump by shooting the red barrels up close. This is a huge time saver and will instantly give you an incredibly competitive time. 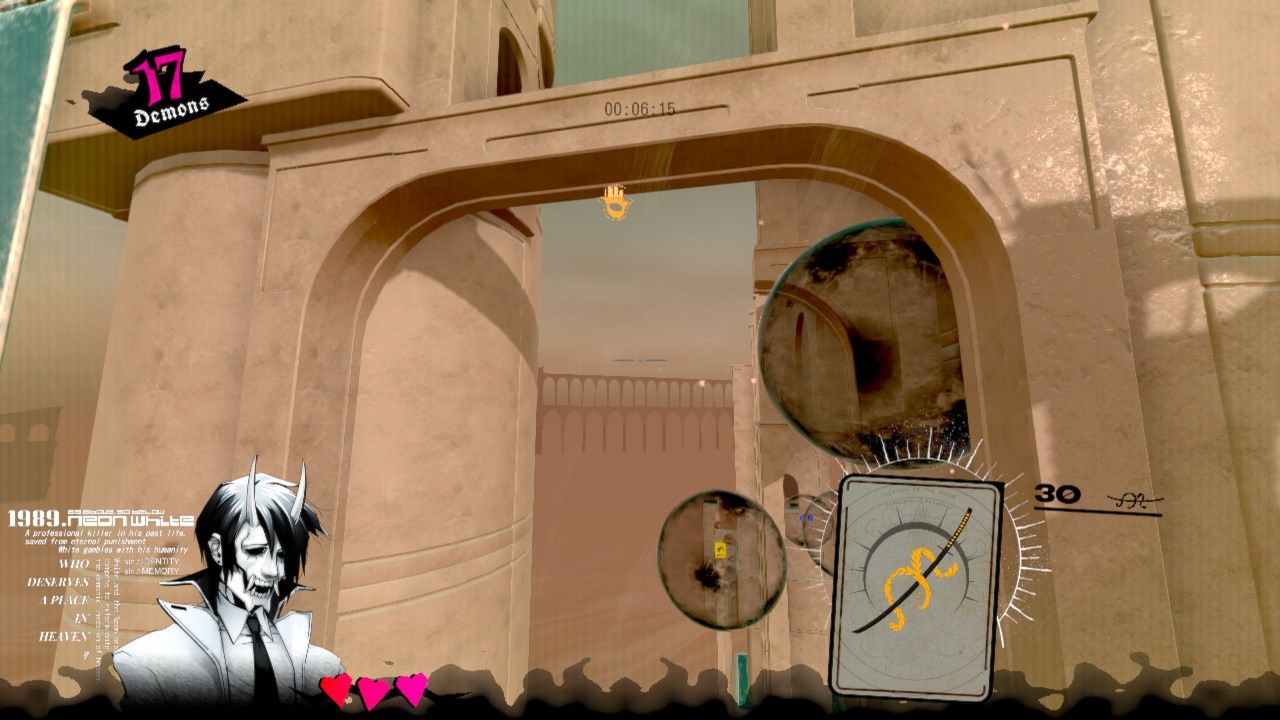 At the very beginning of the stage, as you jump from force field to force field, discarding handguns as you go, you will eventually grab hold of a shotgun. Traditionally, you would use it to boost over to the ballooned demons, but instead, you are going to shoot the balloon demons, turn to your right, and discard the shotgun card to dash under the arch. Just make sure you pass through the force field on your right as you do so.

This is not an easy shortcut to wrangle, it is going to take a little finger dexterity. The secret is to discard every card you get the second you get them to get as much height as possible for when you acquire the shotgun. Also, you should have your crosshairs pointed, more or less, at the balloon demons, as you jump toward that shotgun. With a little practice, you will get it. Thankfully, this section is right at the beginning of the stage, so it is painless to restart if you mess it up. 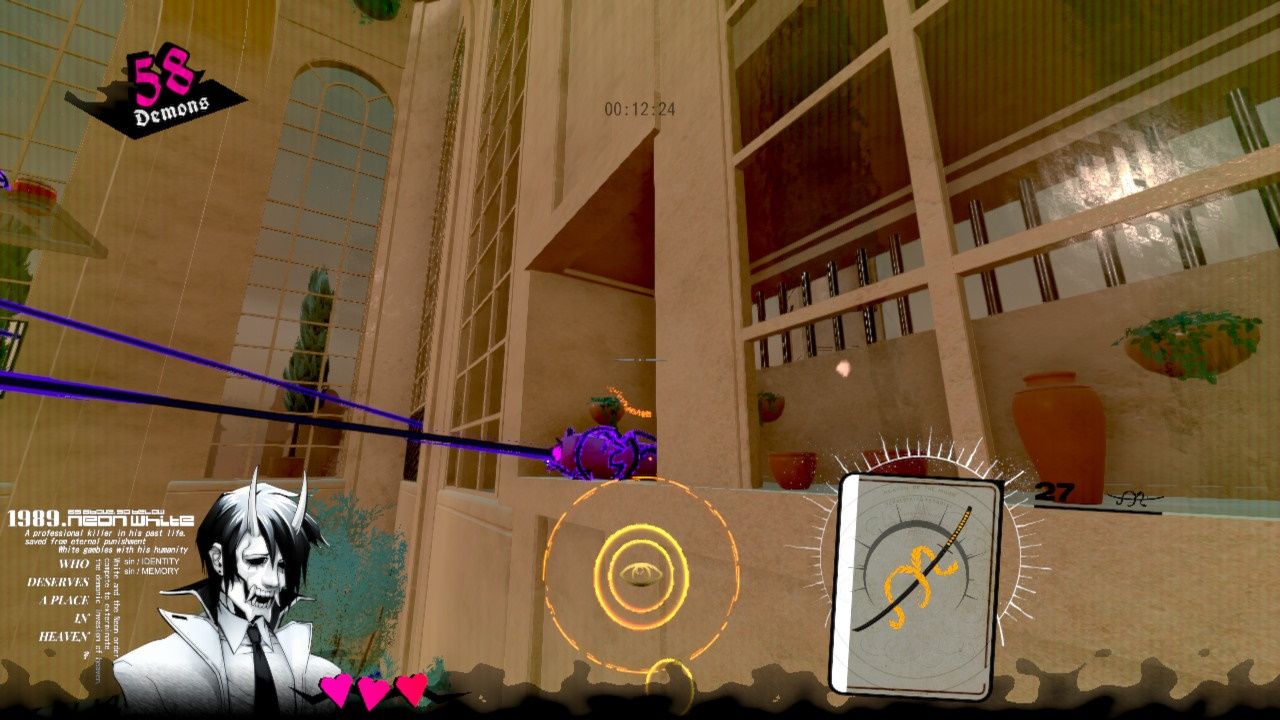 However, for the shortcut you will want to travel through the window to your left that contains the tripwire demon. This is a pretty meager time saver. You are saving around a second. However, in a level as short as this one, that second could very well separate a gold run from a platinum run. Take what you can get. 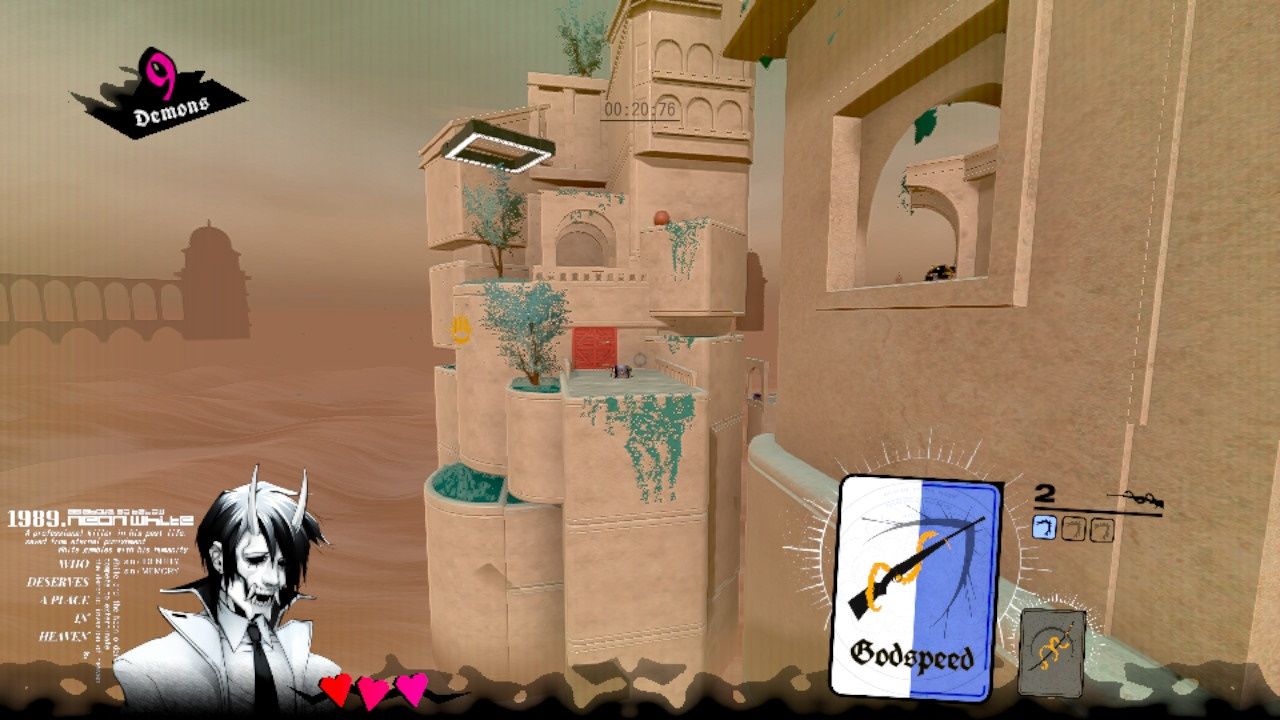 Ah, another demon to deal with. Joy. This shortcut is both simple and super effective. Once you reach the first mimic in the level, just take a left, jump out the window, shoot the mimic to your right, and then use the discard ability to get to the landing across the way. Then, jump toward the mimic chest and swipe at him with your sword from the air. From here on out you can just finish the stage as you normally would, and you will get that platinum with ease. 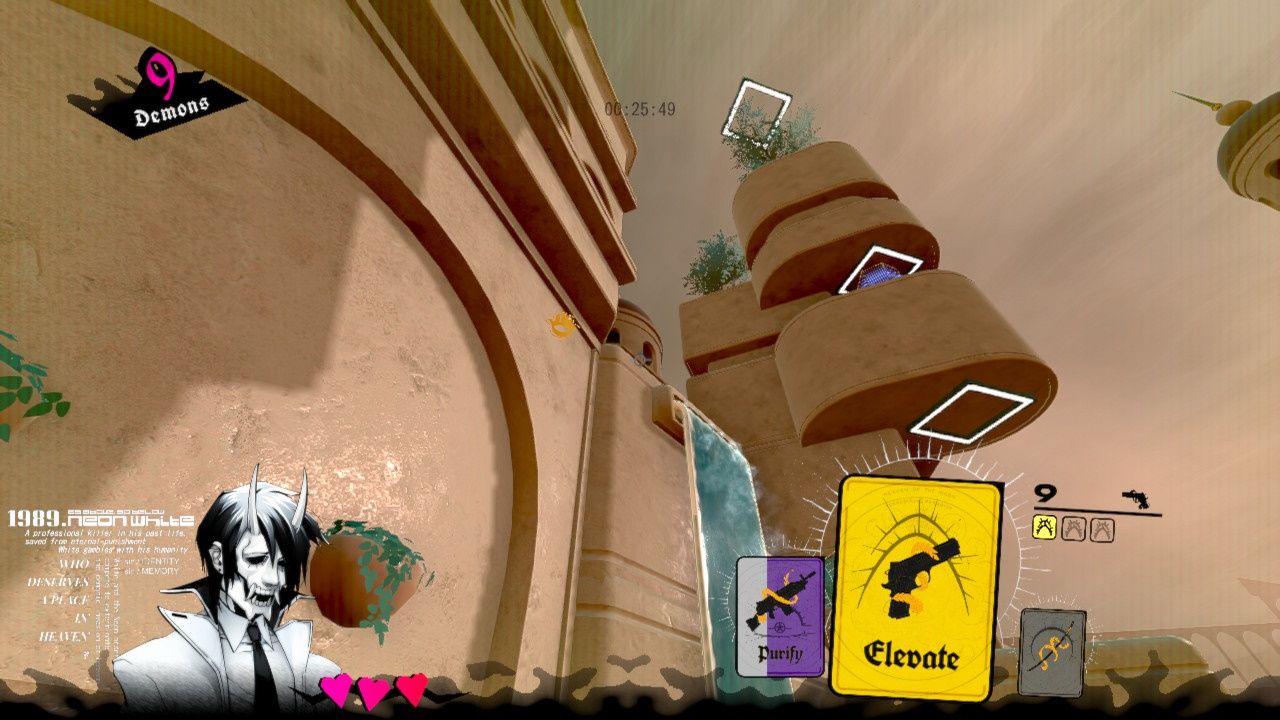 Continue the stage as you normally would. However, once you get ahold of the handgun, instead of platforming around and up to the canal, just use your assault rifle and handgun's discard abilities to double jump and bomb jump your way up to the top of the nearby waterfall. 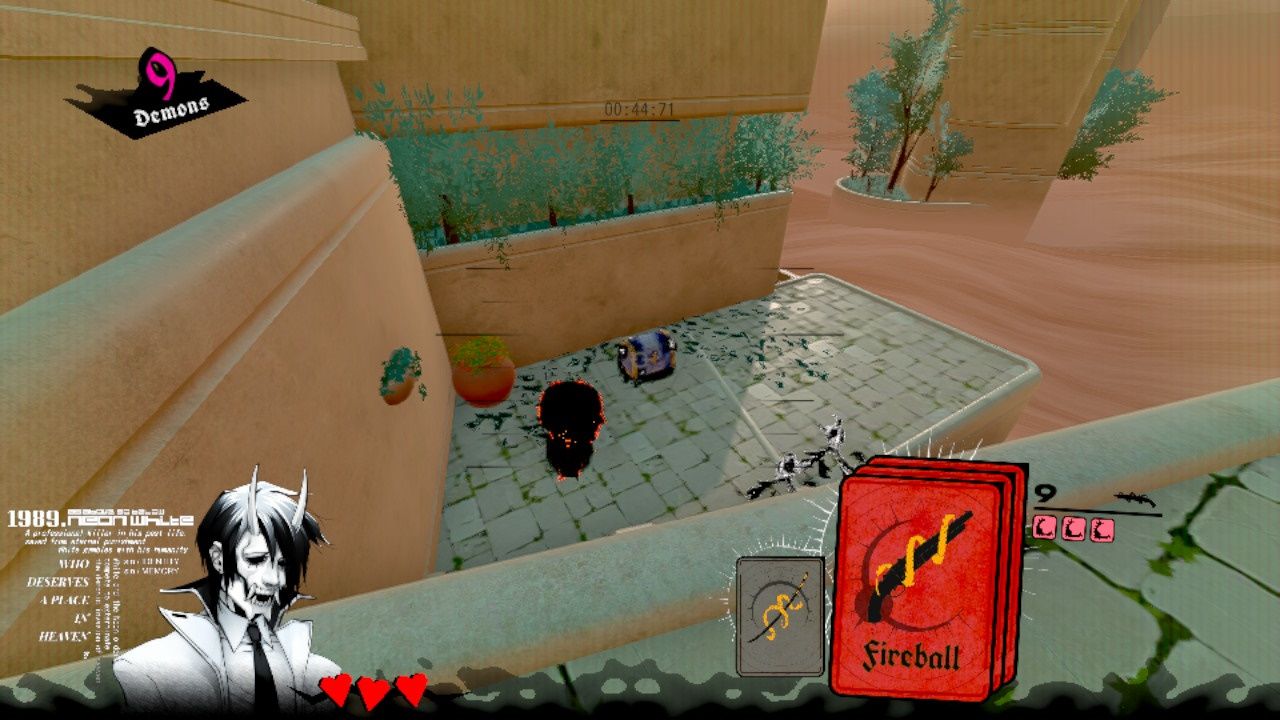 Just make sure you climb the section next to the waterfall and not under it. Also, once you are at the top, peak over the ledge and shoot the mimic. This is a sizable time skip and will almost certainly help you get the platinum medal. 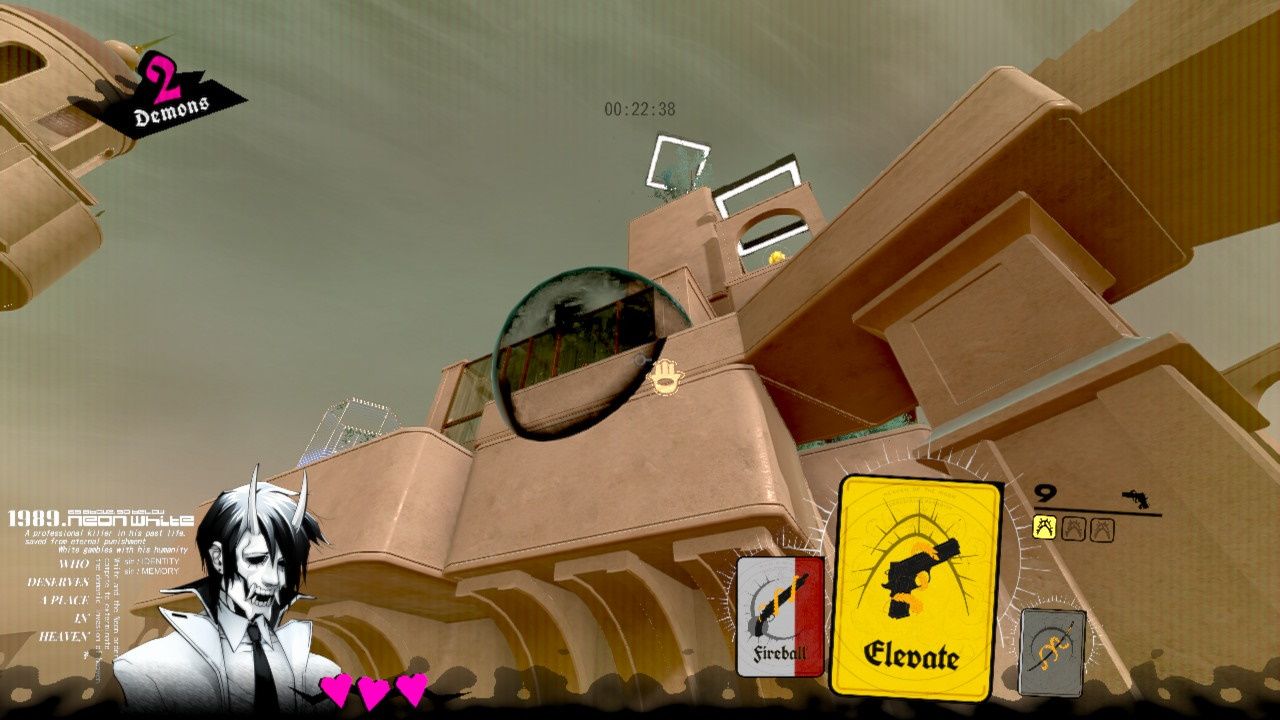 The big shortcut here comes at the very end of the stage. Once you get the shotgun, use it to dash up the side of the wall and take out the demonic head that has been harassing you throughout this stage. You will, of course, have to take all the rest of the enemies out before you do this, but as long as your get the angle right, this is a reasonably sizable skip. 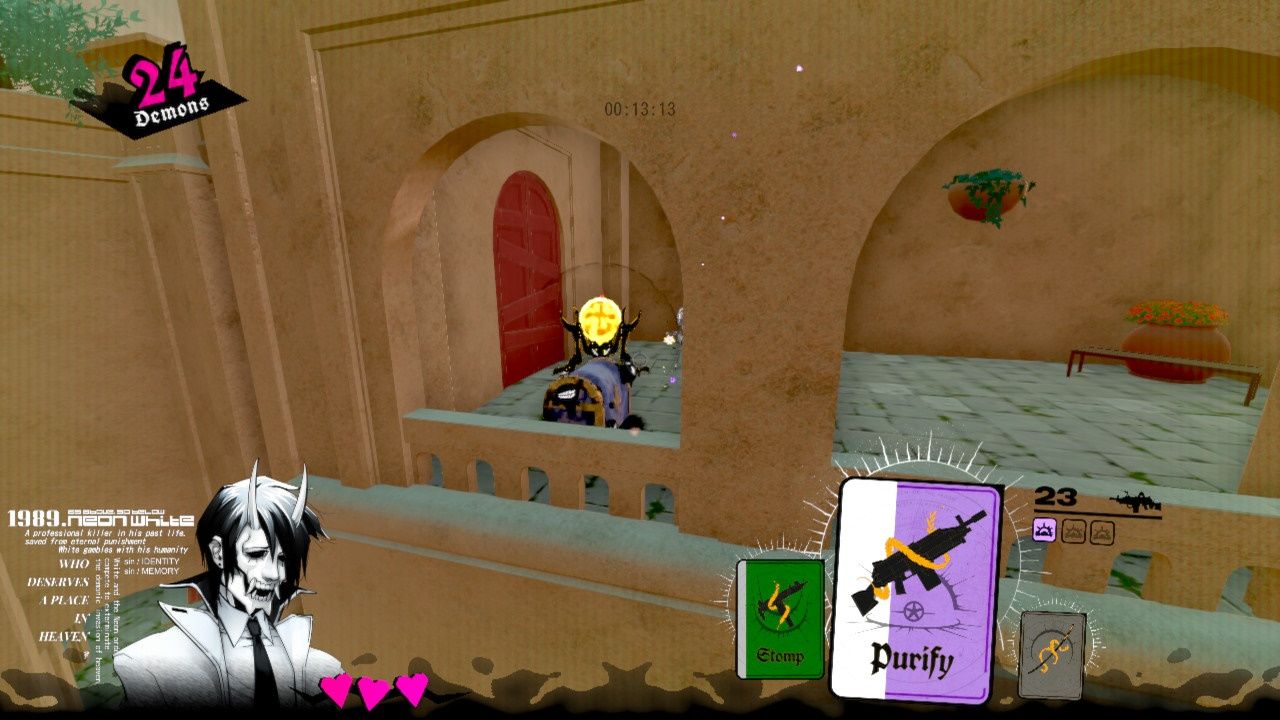 This level's big shortcut requires some pretty tricky shooting. Early in the stage, when you reach the section with the balloon demons, instead of entering the building they lead to, you are going to shoot the mimic to your right and to your left while you are in midair. 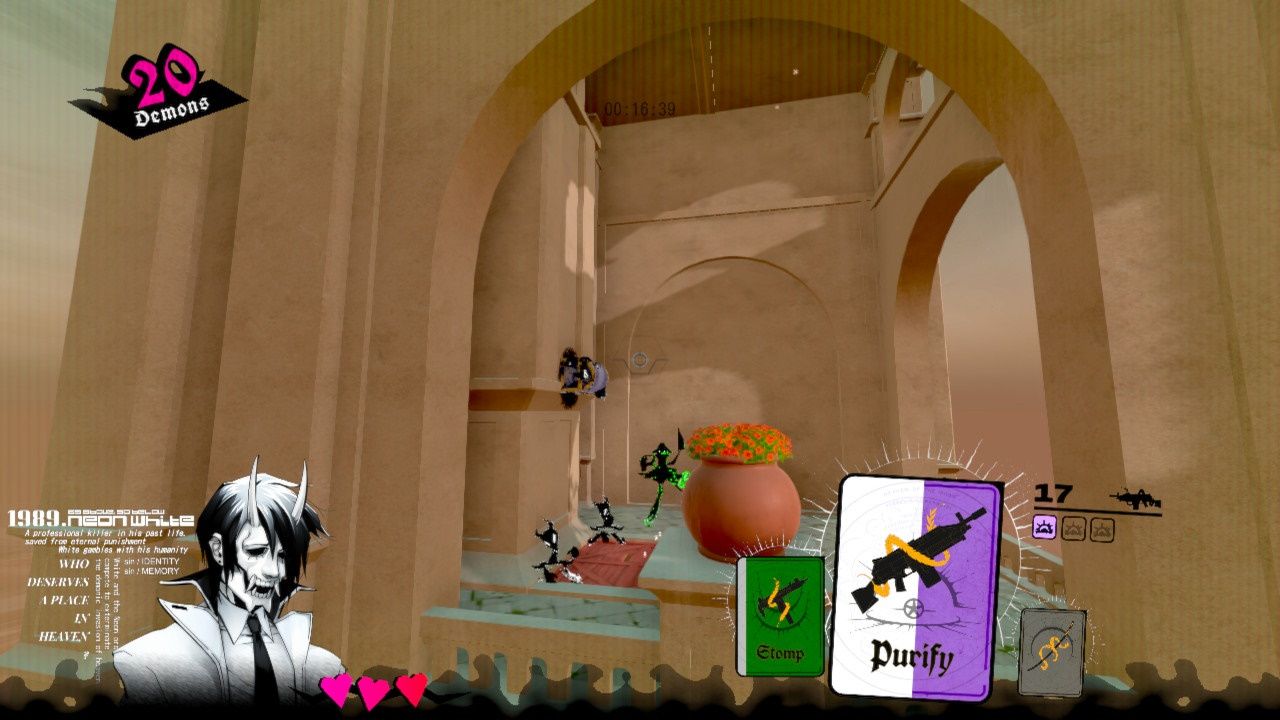 Then, as you start falling, you are going to shoot two more mimics on your way down. Finally, after you have destroyed those four mimics during your fall, slip in through one of the windows of the big building you are falling next to and shoot the mimic on the ground floor before you land. Now continue the stage as you normally would. 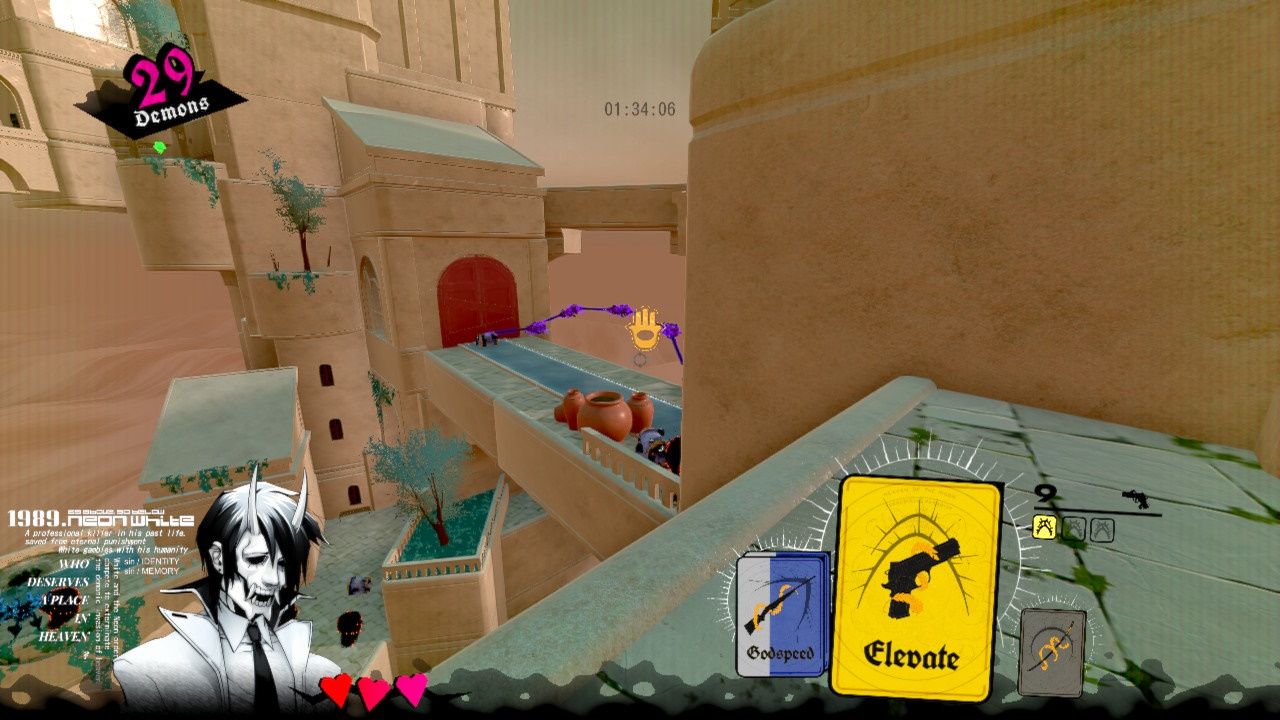 Near the end of the stage, you will encounter a section where you typically land on a landmine demon, are propelled into a canal, take out a yellow demon, and then discard the handgun to double jump up to the next platform, and take out the group of enemies huddling around a mimic demon. For the shortcut, you are going to do things a little differently.

Once you hit the landmine demon, shoot the mimic in midair. Then, take out the yellow demon and just jump across to the canal on your left. Not only does this cut out a second or so, but you get to hold onto your handgun, which will be useful for shooting a mimic a little later on in the stage (where you would normally have to jump and slash them with your sword. It may take an attempt or two to get this shortcut down, as you need to be pretty quick with your shot on the mimic, but once you get it you will be on your way to the platinum.