You are here:
Home / MTG: The 5 Best Black Cards In Commander Legends: Battle For Baldur’s Gate

Magic: The Gathering's most recent crossover with Dungeons & Dragons, Commander Legends: Battle For Baldur's Gate is introducing a wide array of powerful new cards to the game's Commander format. From splashy new spells to include in one's deck, great new Commanders, and even a unique new type of enchantment called a Background, there's a lot to appreciate in Battle For Baldur's Gate.

Battle for Baldur's Gate notably includes a wide range of impressive tools from black decks, from punishing sorceries to high-value creatures and artifacts. But which are the strongest? 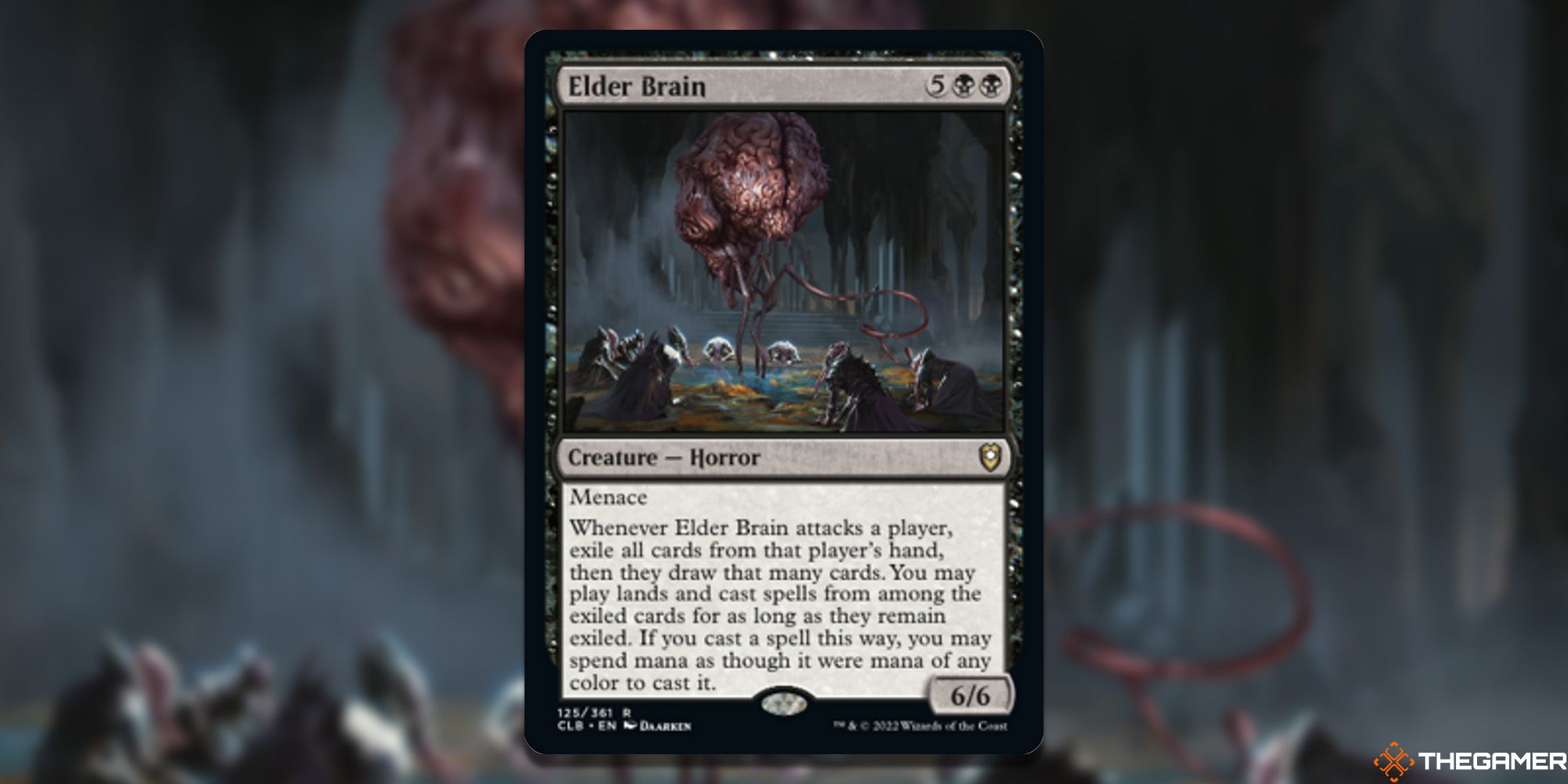 Though Elder Brain may be a steep investment at seven mana, this 6/6 horror with menace is capable of generating incredible card advantage through the use of an opponent's cards. Whenever Elder Brain attacks a player, that player exiles their hand, then draws that many cards. As long as those cards remain exiled, Elder Brain's controller can play lands and cast spells from among them, spending mana as though it were mana of any color.

When attacking a player with a sizable hand, this can provide Elder Brain's controller with the equivalent of an additional hand to play cards from. Additionally, as this creature causes an opponent to draw several cards whenever its ability triggers, it's an excellent addition to decks that aim to force opponents to draw cards and deck them out, such as those helmed by Nekusar, the Mindrazer. 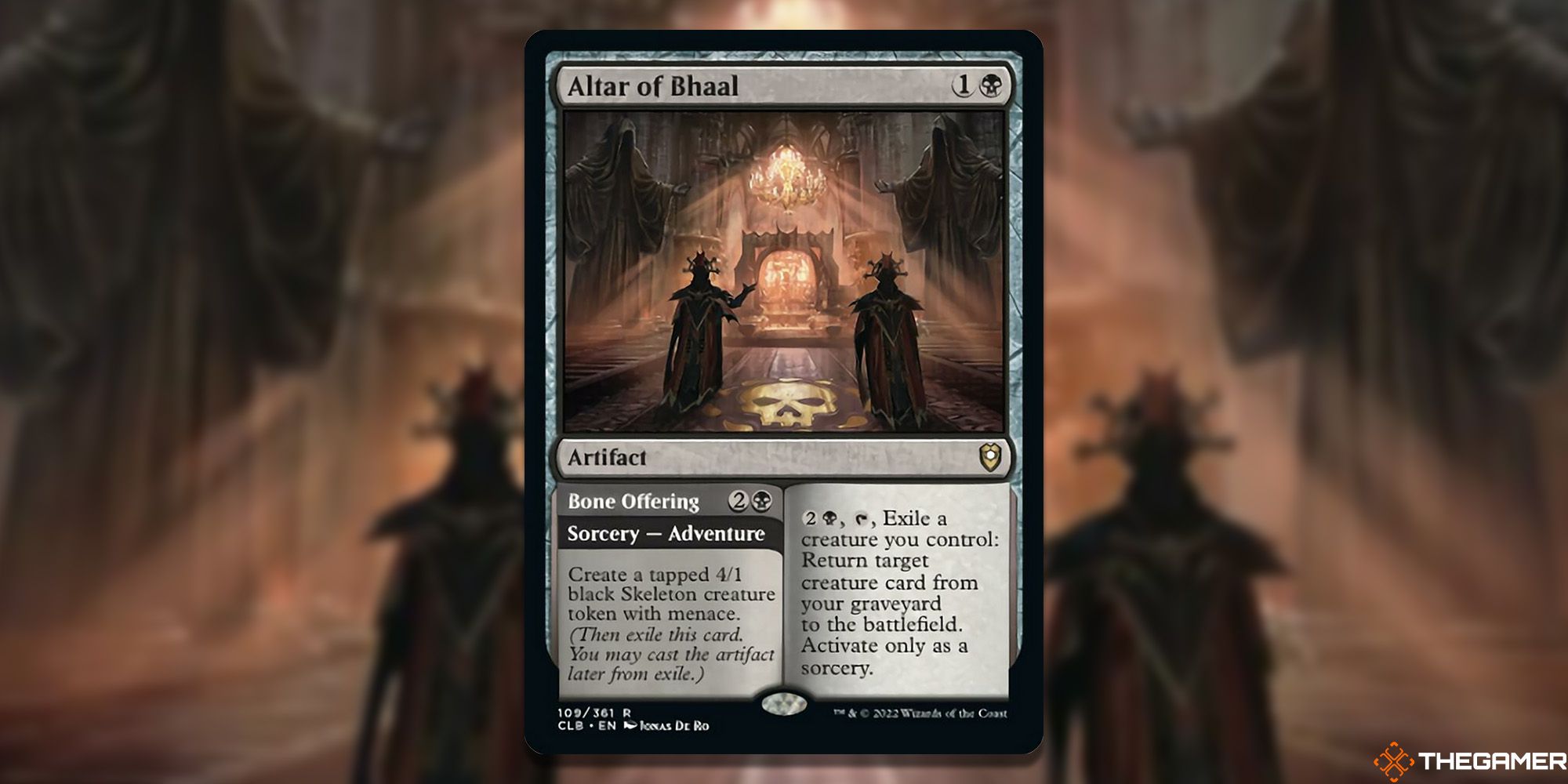 Altar of Bhaal is a great artifact that can be a powerful asset to black graveyard-based decks. Once in play, the Altar may be tapped for three mana and exile a creature its controller controls to then return any creature from their graveyard to the battlefield. If a player is able to fill their graveyard with high-mana creatures, whether it be through discarding or mill, Altar of Bhaal can be used each turn to cheat such creatures into play, subverting their mana costs in the process.

While this would already be a useful effect in its own right, this artifact can set itself up by first being cast as an Adventure. If cast as an Adventure, this three-mana sorcery creates a tapped 4/1 black Skeleton creature token with menace, ensuring the Altar will have access to at least one creature to sacrifice when it enters the battlefield. 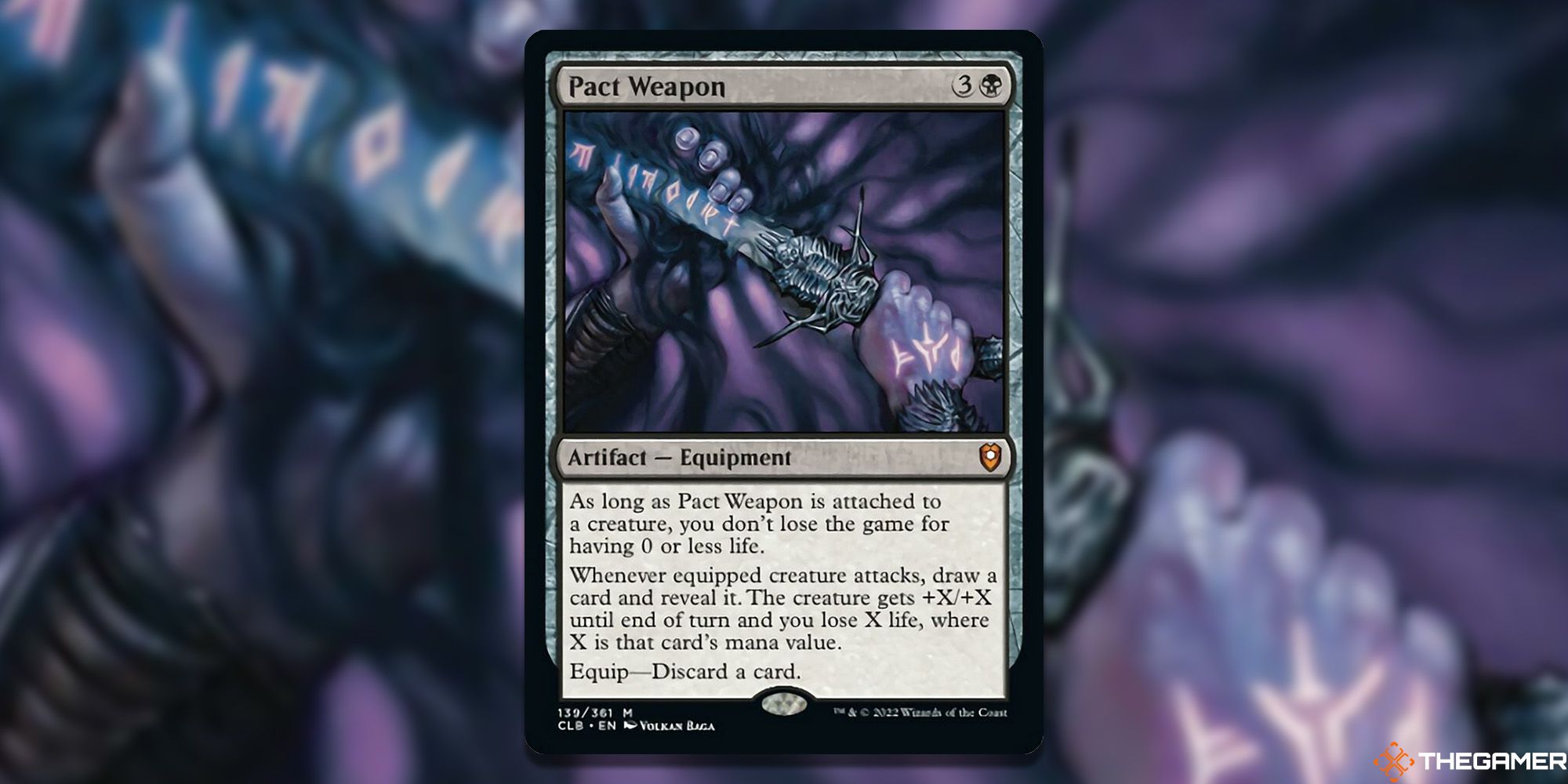 Despite the fact that black is not a color typically associated with strong equipment cards, Pact Weapon is a stellar black equipment that can accumulate significant value for its controller over the course of a game. Though it costs four mana to cast, Pact Weapon's equip cost simply requires that its controller discards a card.

Though the loss of life from Pact Weapon may potentially add up rather quickly, perhaps the most appealing element of the card for some players is that, as long as it is attached to a creature, its controller can't lose the game for having zero or less life. This makes it a great addition to any deck that aims to convert their life total into alternative value, as Pact Weapon can serve as an insurance policy to prevent those strategies backfiring. 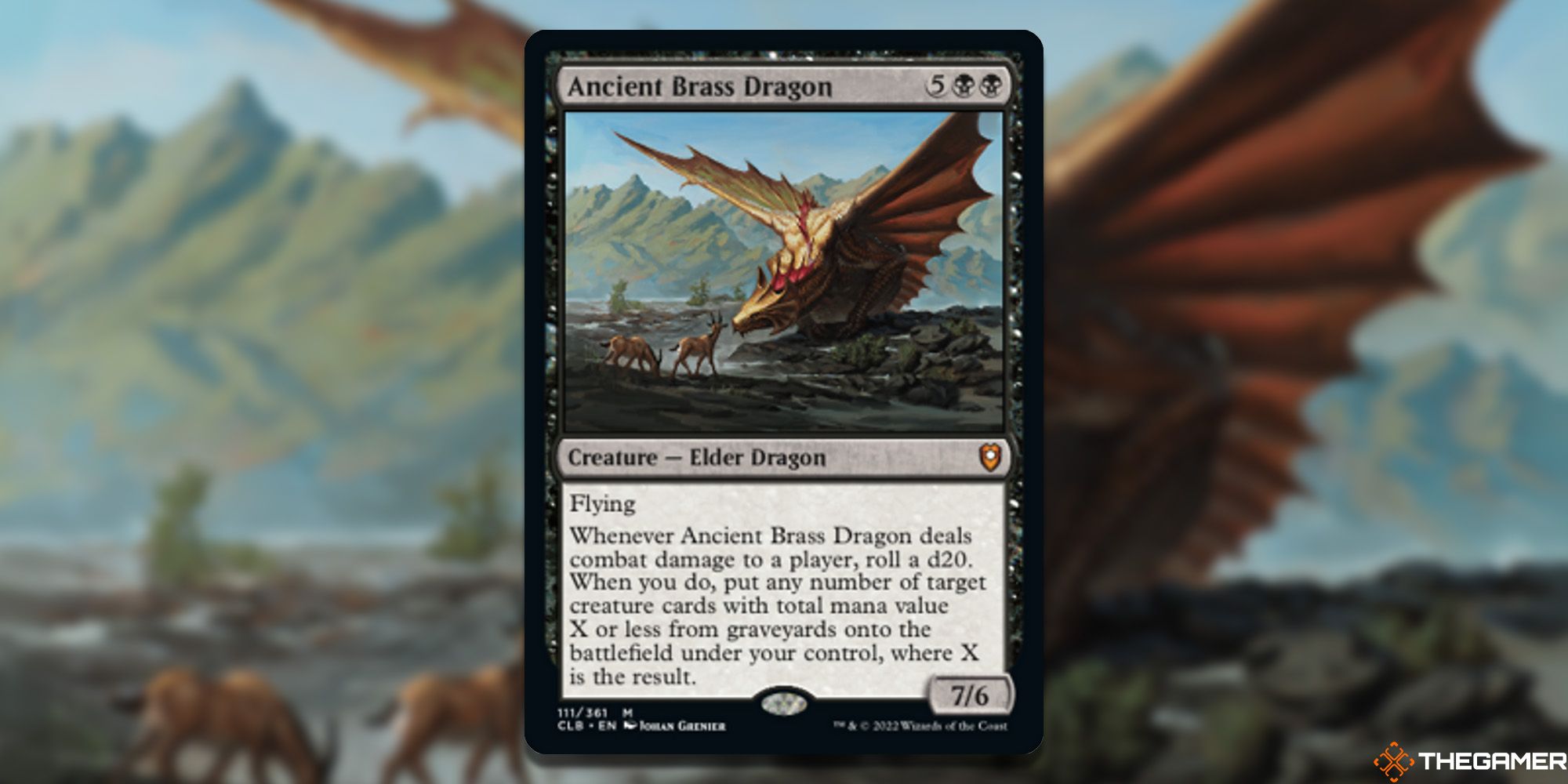 Ancient Brass Dragon is black's representative from Battle For Baldur's Gate's cycle of mythic monocolored metallic dragons. A 7/6 Dragon with flying for a steep seven mana, Ancient Brass Dragon is an excellent asset in any deck that aims to utilize their graveyards, or the graveyards of their opponents. Upon dealing combat damage to a player, this Dragon's controller rolls a d20. They can then return any number of creatures from among any player's graveyards with a combined total mana value no greater than the result of the d20 roll.

If a player is fortunate, Ancient Brass Dragon can potentially provide a player with a devastating board state within a single turn, as long as at least one player has a graveyard full of valuable creatures. Even if a player doesn't roll particularly high, as this ability triggers each time the dragon deals combat damage to a player, they can always try again. 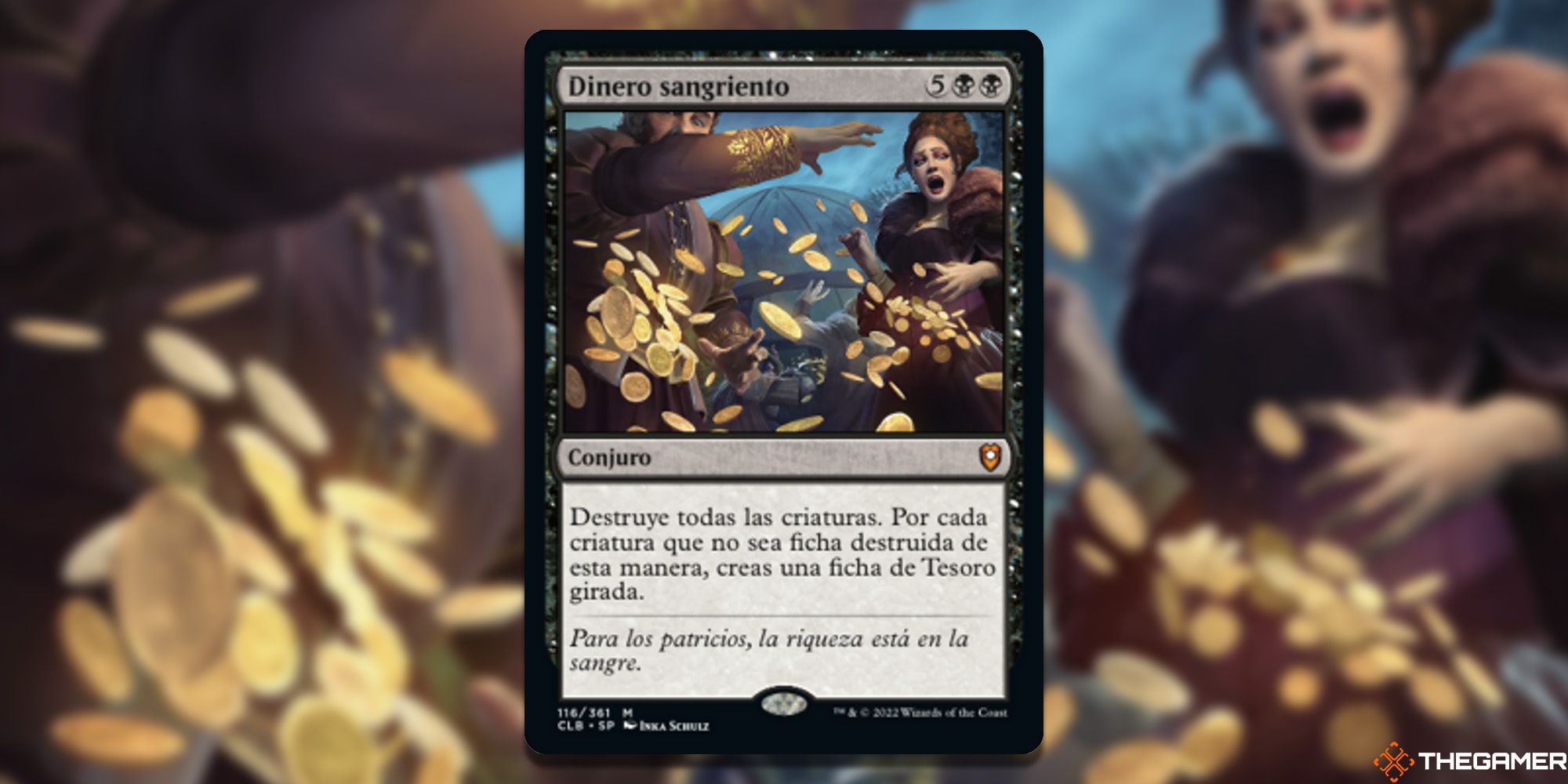 Though it may be costly at seven mana, Blood Money is an incredible new monoblack board wipe that offers a one-sided benefit to its caster. Destroying all creatures, Blood Money's caster then creates a tapped Treasure token for each nontoken creature destroyed this way. If played well into a game of Commander in which one's opponents have committed to their board states, a well-timed cast of Blood Money can not only deprive opponents of their creatures, but set up this spell's caster for highly impactful future turns, thanks to their newly gained mana sources.