You are here:
Home / MTG: The 10 Most Valuable Cards From The Warhammer 40,000 Commander Decks

MTG: The 10 Most Valuable Cards From The Warhammer 40,000 Commander Decks

Magic: The Gathering’s Universes Beyond blends some of the most iconic franchises with Magic’s classic card game, such as its Warhammer 40,000 Commander decks that bring the popular tabletop wargame to Magic for the first time.

The Universes Beyond Warhammer 40,000 comes in two versions: the regular version, and the premium Collector Edition version. The Collector Editions are an all-foil premium edition of the regular editions, with a special foiling process called surge foils. These surge foils top the charts in terms of price, pushing out all other cards in the top ten most valuable.

These prices are determined by the average market price from cards listed on TCGPlayer, and are subject to fluctuations as time passes and the competitive meta evolves. Prices may not be the same as at the time of writing. 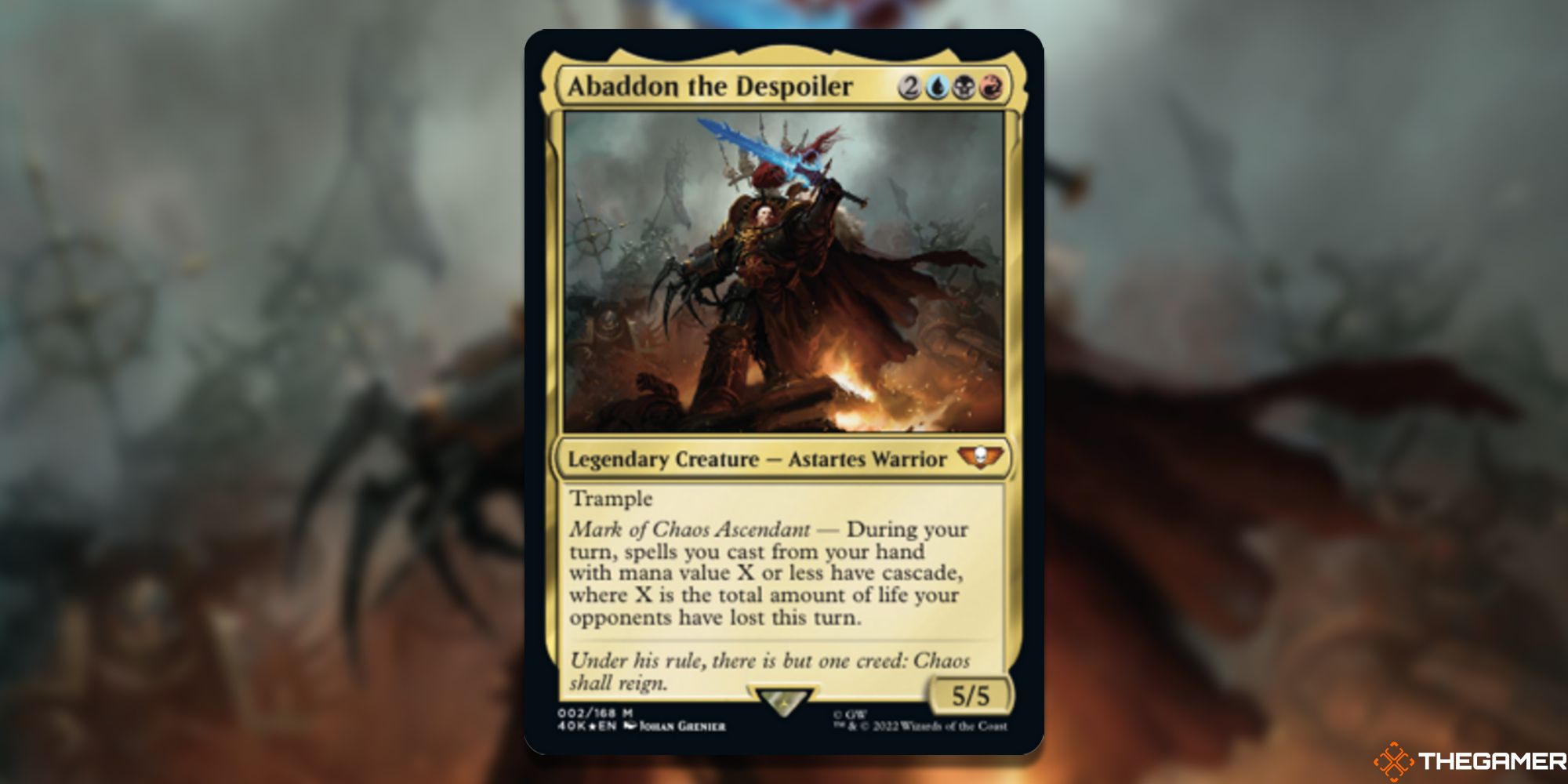 The king of cascade, Abaddon the Despoiler takes the number ten slot for most valuable cards from the Warhammer 40,000 Commander decks. As the Warmaster of Chaos, Abaddon relishes in the randomness of Commander games. Fill your deck with ways to deal damage in a turn and give all the cards in your hand cascade for double the value. 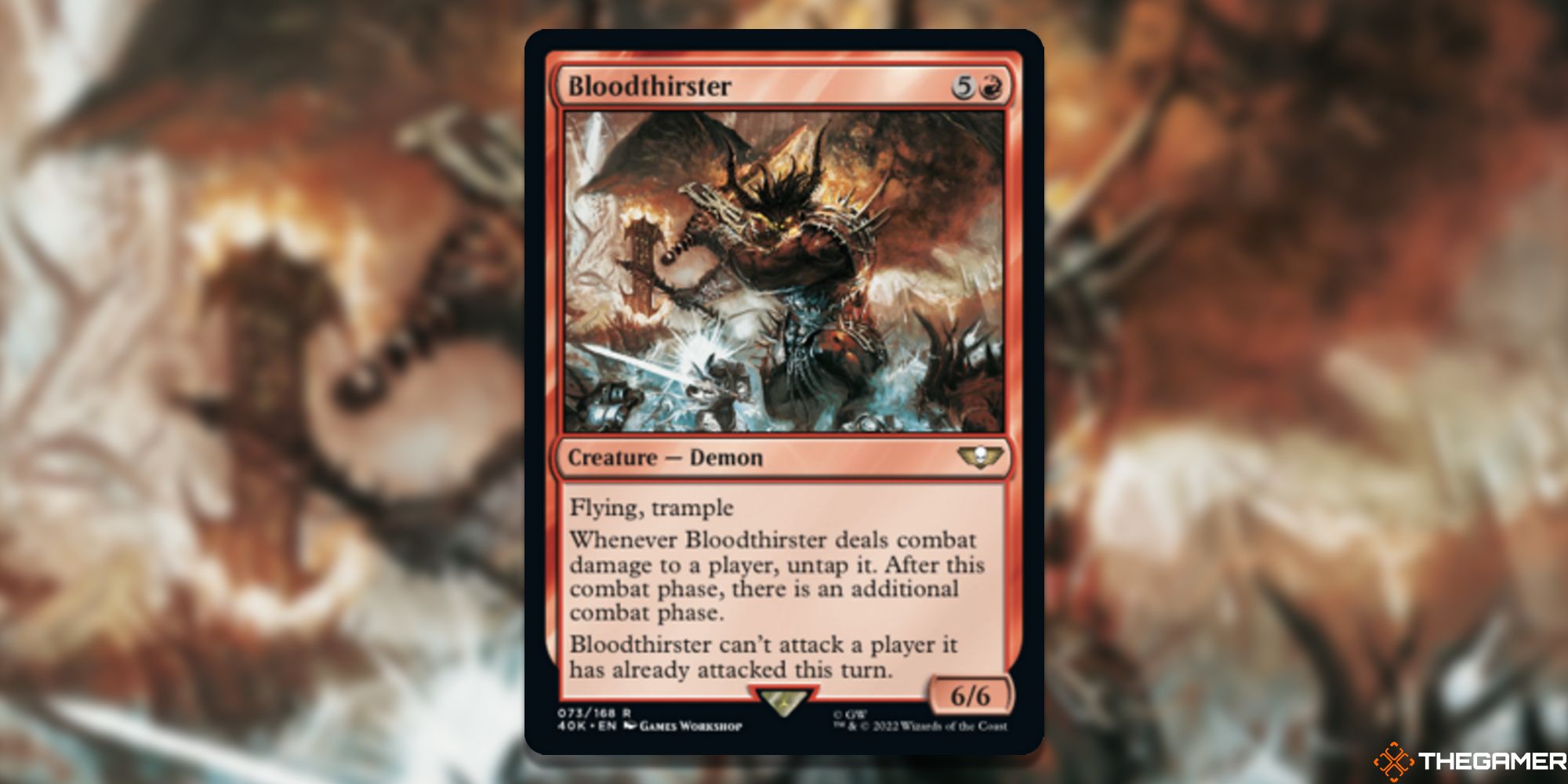 This demon is all about dealing tons of damage by granting you an extra combat step after it attacks. While Bloodthirster can only attack once per turn there are all sorts of combat tricks to keep it attacking. Bloodthirster also has flying and trample, meaning the six power it boasts can only be blocked by other flying creatures and those with reach, and any damage your opponent can’t block goes through. 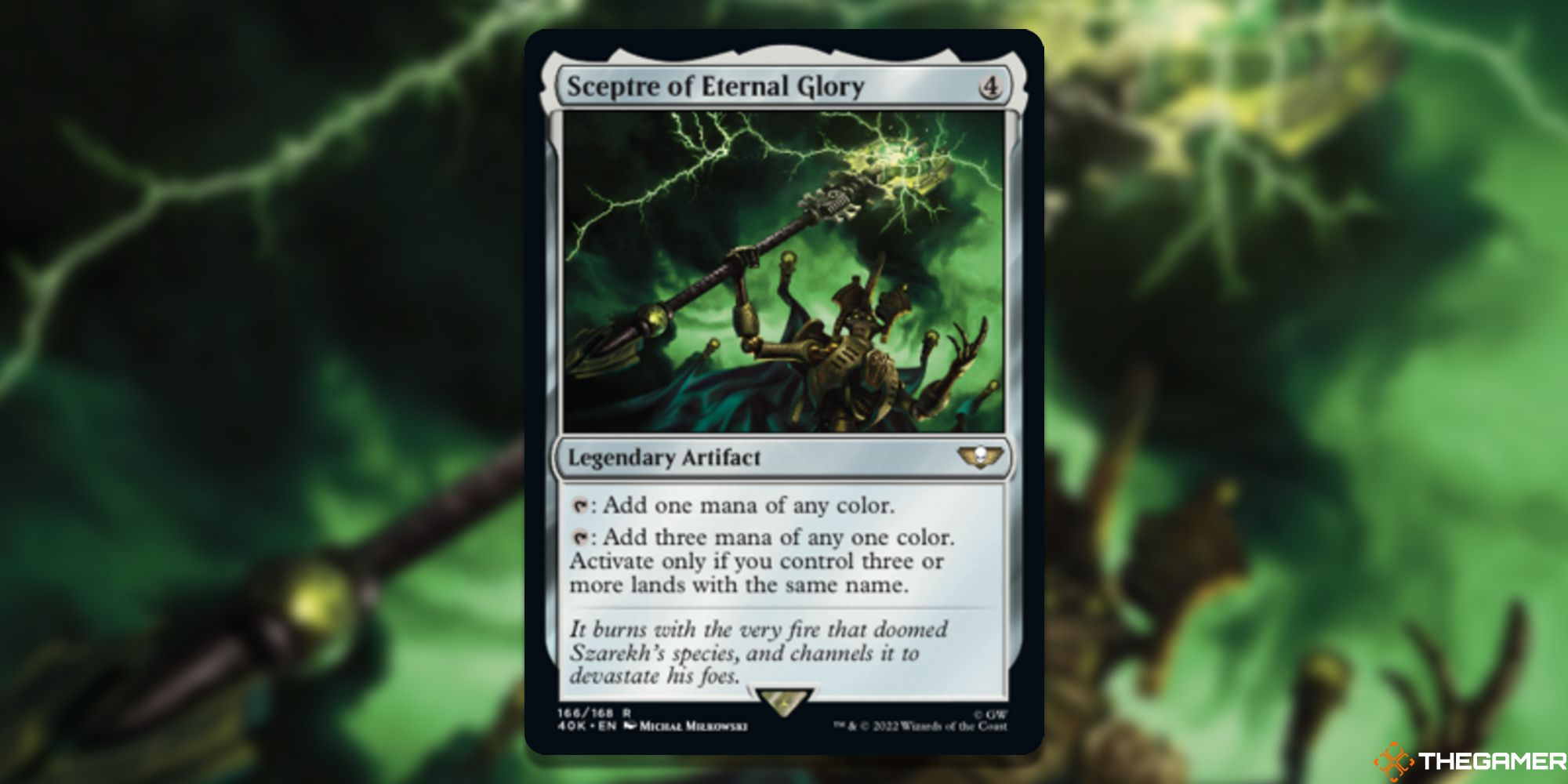 Sceptre of Eternal Glory is the fuel for any number of infinite mana combo pieces. Combine with a Staff of Domination and the Necron legendary creature Trazyn the Infinite for an easy infinite mana, life, and cards.

Sceptre of Eternal Glory is great even without an infinite combo, accelerating out late-game strategies a few turns earlier in mono-colored decks. 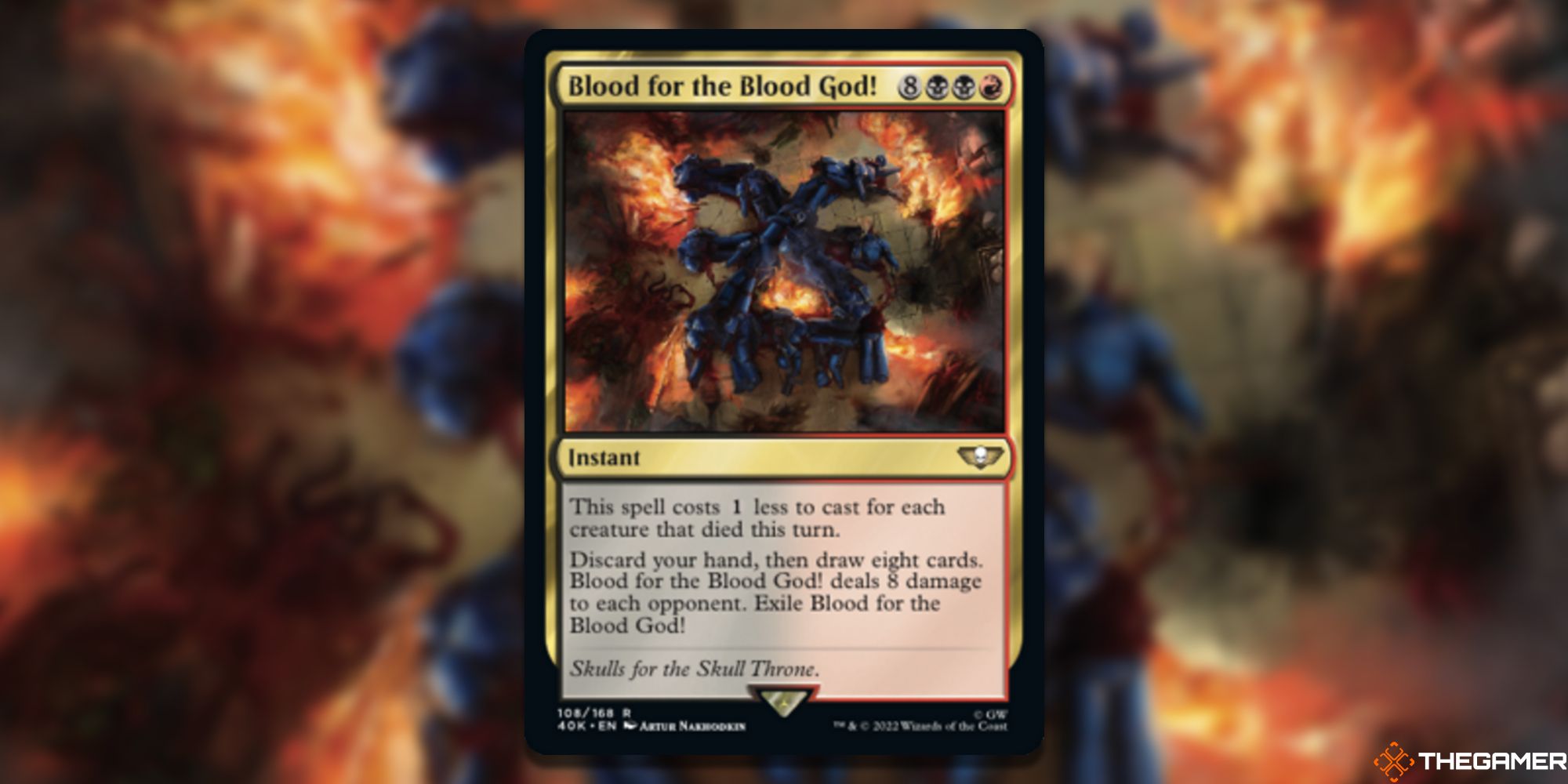 There are few cards that evoke more power than Blood for the Blood God! This eleven-mana instant does a lot of work but getting to that point can be difficult.

You’ll almost never be casting it for the full eleven mana, but don’t be surprised if it costs more than you’d expect.

At best, you can cast this spell after a massive board wipe destroys all creatures in play for a much smaller three mana. More likely, though, Blood for the Blood God will still take up all of your mana to cast. 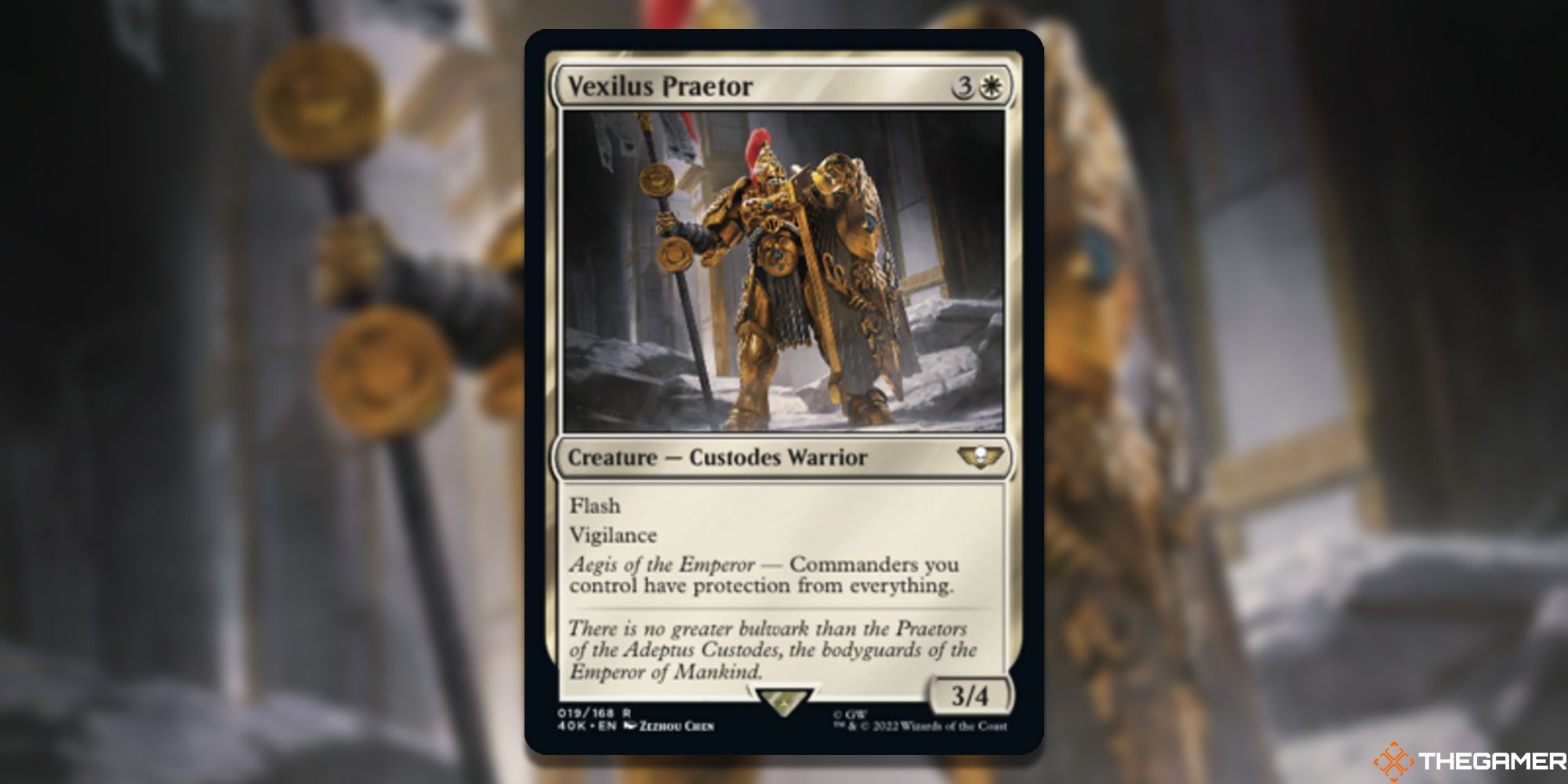 The Custodes are the elite of the elite, the cream of the crop, the premiere warriors of the Imperium of Man. These armored soldiers protect The Golden Throne and the Emperor himself.

Much like their tabletop counterparts, Vexilus Praetor does everything in its power to protect your commander from, well, everything. This can be a double edged-sword since protection from everything means your own spells and abilities can no longer target your Commander as well, but the risk is well worth it to keep your Commander in play. 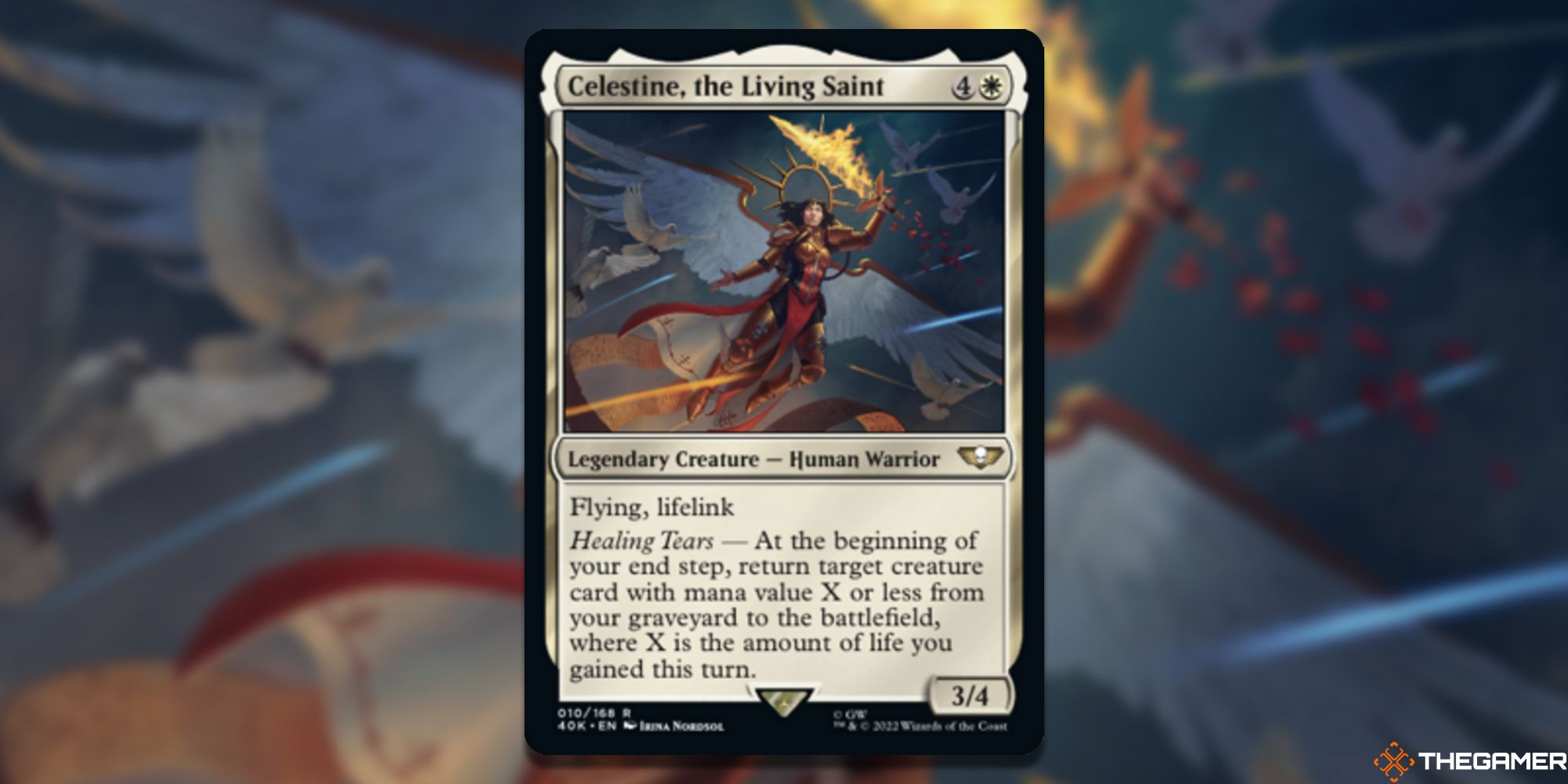 This efficient angel-looking human is an engine for returning creatures from your graveyard back to the battlefield. Celestine does require you to gain life before you can start bringing creatures back, with so many ways to efficiently gain life in Commander this isn’t a problem at all.

Even better, Celestine has lifelink and flying, giving her evasion and the ability to fuel her own ability. 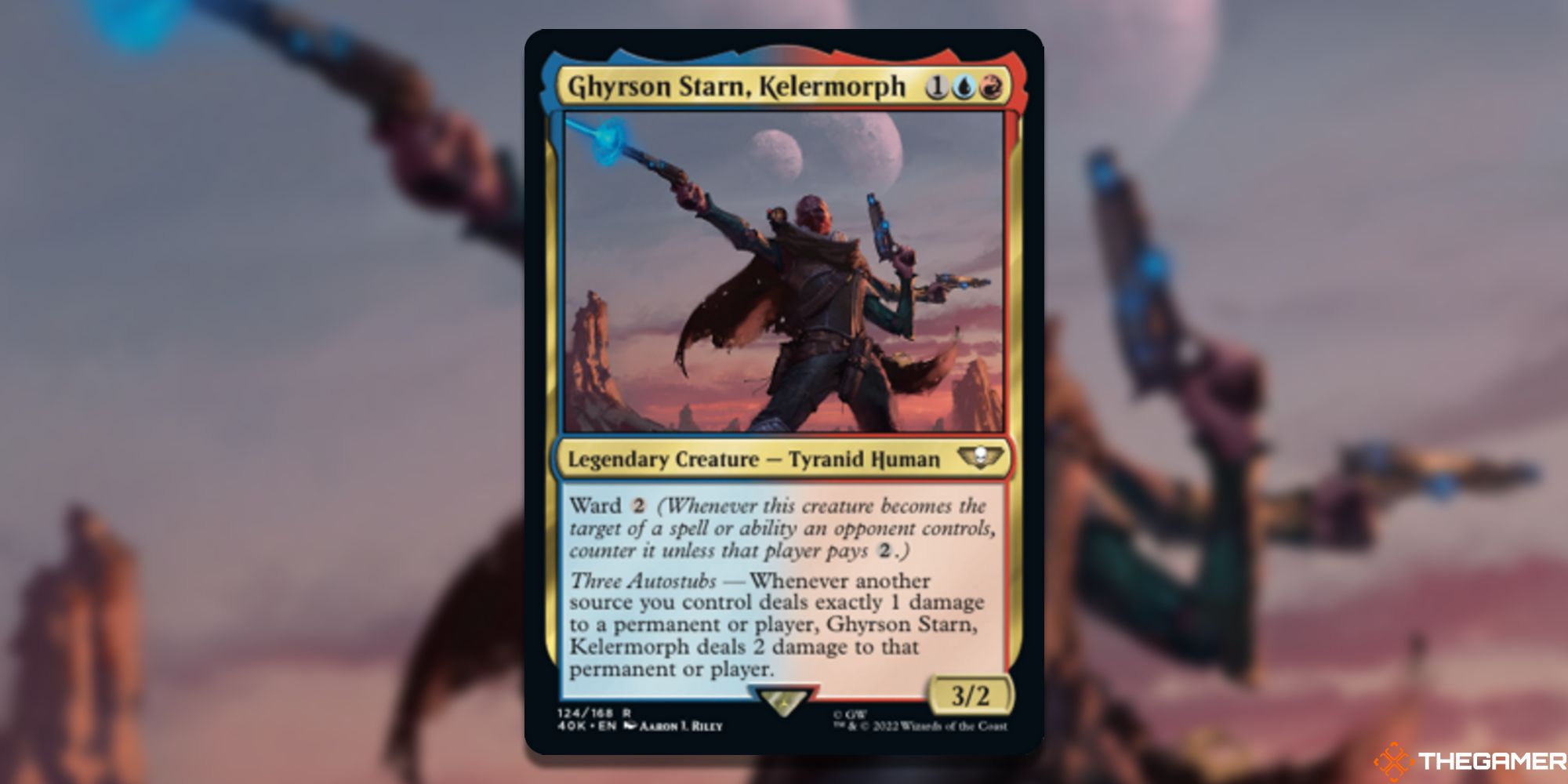 Being a blue and red Commander, there are tons of ways to draw more cards and deal more damage with combos Curiosity and Niv-Mizzet, Parun, which is already a combo in itself, but now it’s faster. 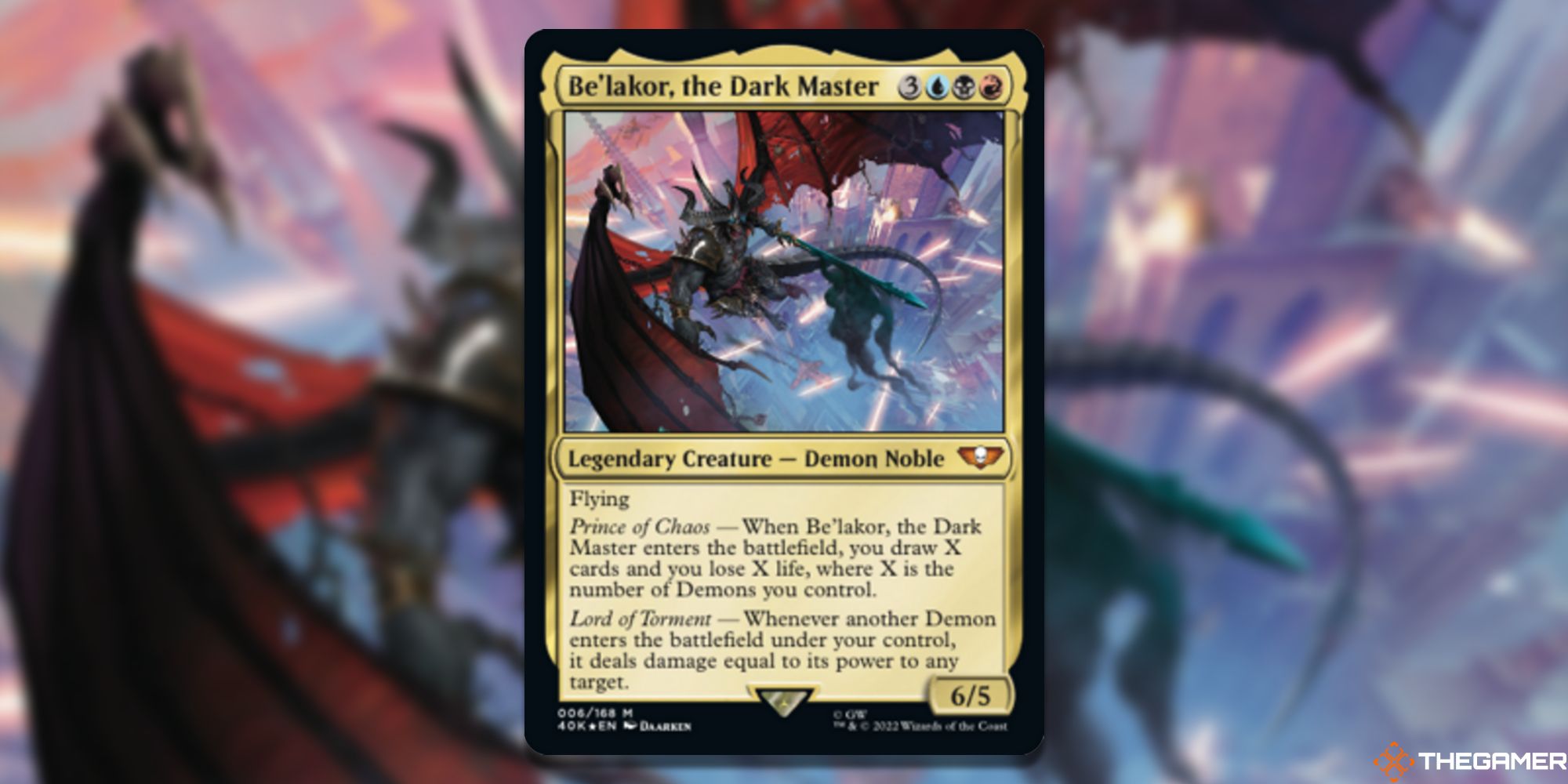 This unique Grixis demon is a great tribal Commander if you’re looking to add some shenanigans to your demon list.

With cards like Rite of Replication, you can create five extra token copies of Be'lakor, triggering all their enter-the-battlefield abilities and dealing upwards of 150 damage spread across any number of targets. And with counterspell backup, you’ll almost always be able to cast it. 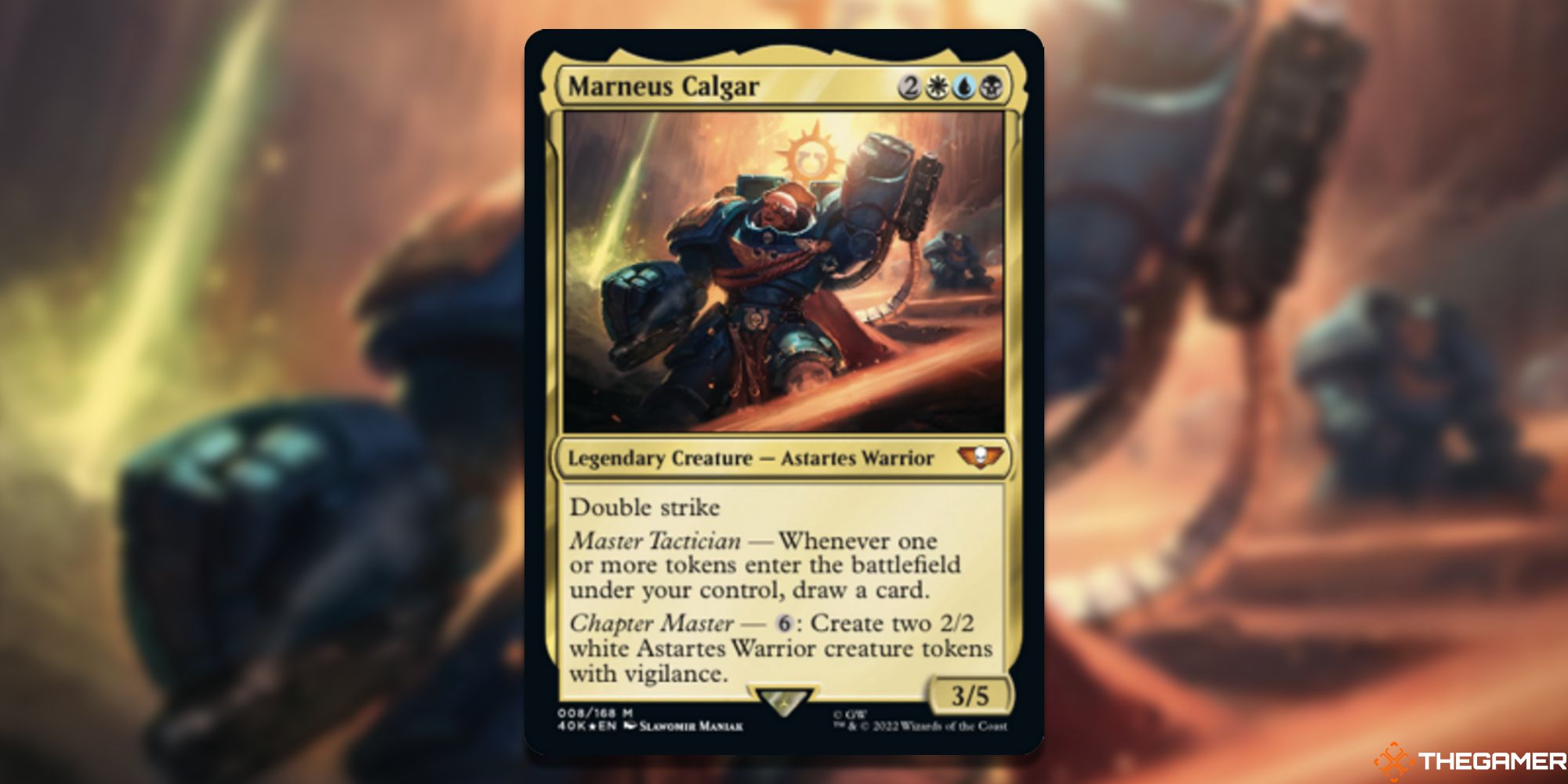 One of the most exciting Commanders from the Warhammer 40,000 Commander decks, Marneus Calgar is a win-condition all on its own. With minimal effort you can create several infinite combos with his token generation ability, drawing tons of cards and quickly amassing an army.

One easy combo includes Ashnod’s Altar and Training Grounds to reduce Marneus Calgar’s ability to four generic mana, making two tokens, drawing a card, and then sacrificing the tokens to Ashnod’s Altar. Repeat to draw your entire library and (probably) win the game. 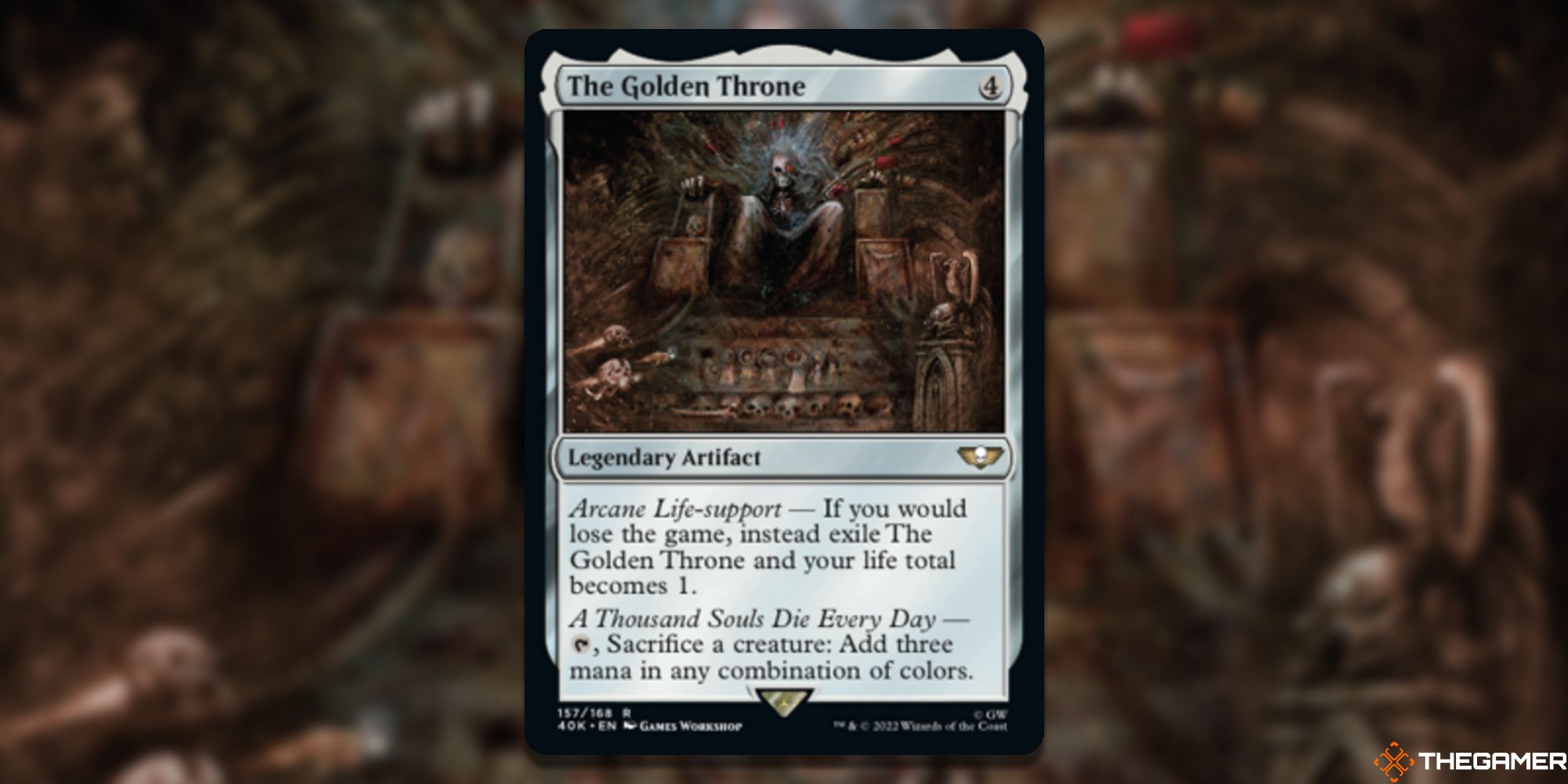 It is fitting that The Golden Throne of the Emperor of Mankind is the most valuable card from the Warhammer 40,000 Commander decks. The Golden Throne’s first ability saves you if you were to lose the game, then exiles itself from the game.