With Streets of New Capenna comes five new Commander decks. Each one is led by a member of one of the five crime families. These decks are Maestros Massacre, Caberetti Cacophony, Bedecked Brokers, Obscura Operation, and Riveteers Rampage. They’re all comprised of three different colors from Magic: The Gathering’s color wheel and boast a specific strategy. Each one of them also tries to showcase the new mechanic all the families bring to the multiverse of Magic.

Some of them succeed more than others, giving a very clear hierarchy amongst the decks. A deck’s ranking can be subjective because, for example, if you prefer to rely on creatures more than spells, then you will favor one deck over another. However, some qualities undeniably make a deck better than others. The quality of the commander is one of the reasons, such as synergy, and several other aspects.

Cabaretti Cacophony is dominated by the Naya colors green, red, and white. Its overall strategy is to go wide with creatures and creature tokens. It comes in last on this ranking for a couple of reasons. The biggest is that it just doesn’t have the mana rocks you want to see in a Commander deck. Sure, it’s an aggressive deck that plays a good amount of mana ramp and small, impactful creatures. However, you’re going to want mana rocks like the Ravnica signets even with an aggressive strategy. After all, the other preconstructed decks from Streets of New Capenna got them.

This deck also finds itself at the bottom of the list because the Commander Kitt Kanto, Mayhem Diva, isn’t that good. Even the alternative commander options in the deck aren’t much better. They either cost too much mana or their abilities are not that impactful. You want your commander to pose a threat and make your opponents fear for their life points. This deck doesn’t do that. 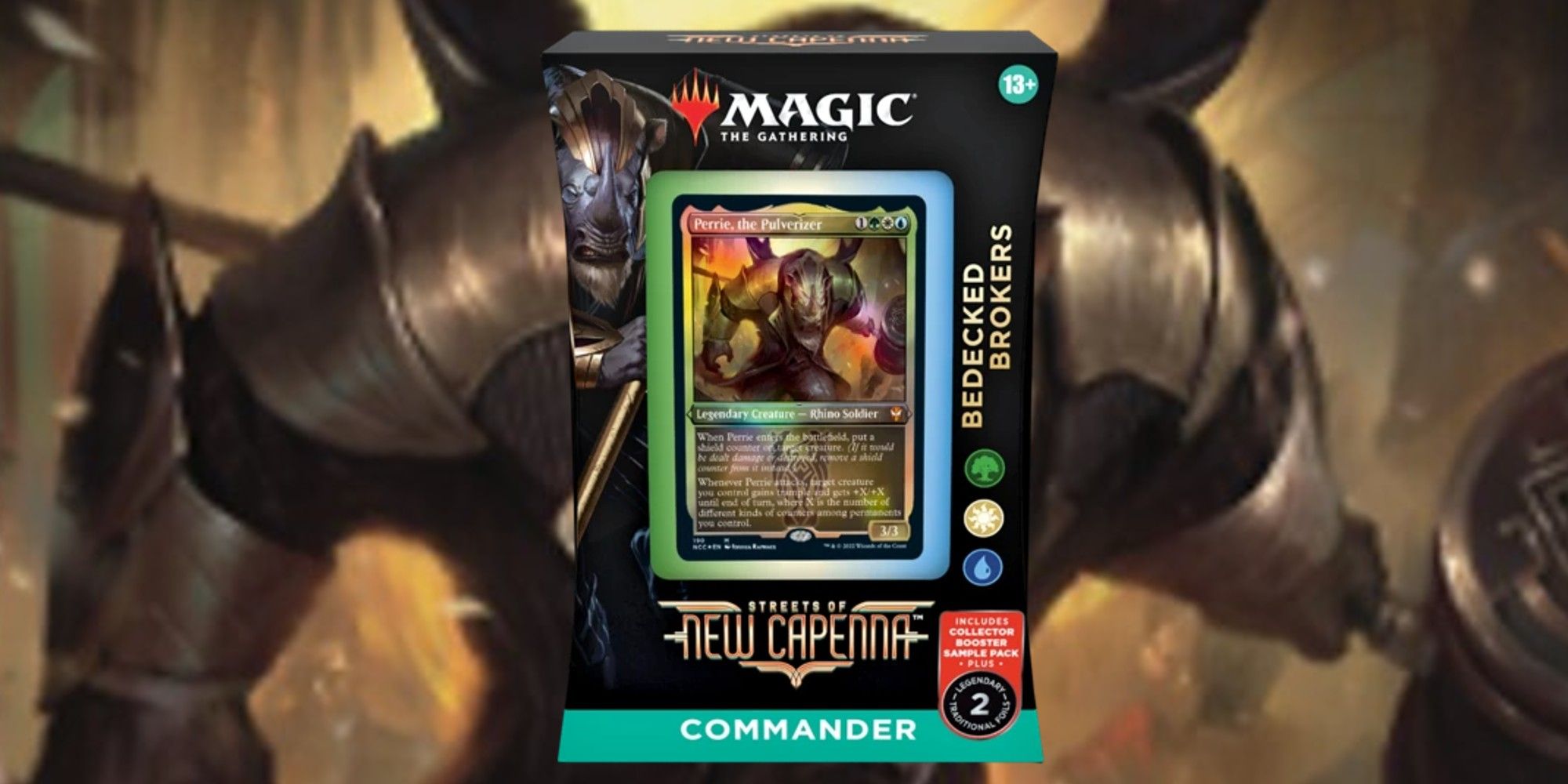 The Brokers are a family of lawyers with the blue, green, and white mana identity commonly referred to as Bant. This is very much a “counters matter” type of deck, meaning that it utilizes a variety of counters on your creatures, from +1/+1 counters to the new Shield counter introduced with Streets of New Capenna. The Shield counter prevents an instance of damage or destruction on a creature. Instead, the counter is removed from the creature. Similar to the Cabaretti Cacophony deck, this deck doesn’t have any of the Ravnica signets to help ramp in the early game.

Yes, it has a few mana dorks to make up for the slack, but it takes one board wipe and you’re suddenly in a deficit of mana. On the other hand, Bedecked Brokers is one of the only decks to have a second charm along with the family charm. It has Bant Charm in its arsenal, which is an excellent tempo spell. That is something really going for this deck, besides really leaning into its “counters matter” strategy: It has a good list of spells to help its creature base get established.

The Maestros are a crime family that occupies the Grixis shard of the color wheel (blue, black, and red), and their Commander deck is a spellslinger deck. This means that it favors spells over creatures. Leading the charge in this deck is Anhelo, the Painter (one of the best cards in Maestros Massacre), a vampire assassin that gives the first instant or sorcery Casualty 2. This means you may sacrifice a creature with power two or greater and copy the spell. This is an excellent deck, but it has some flaws.

While the Maestros Massacre deck wants more spells than creatures, it doesn’t have enough creatures to take advantage of the Casualty mechanic. It’s a bit clunky and requires some upgrades to really make use of the Maestros mechanic. That said, without using Casualty, it’s a solid deck. It has some classic spells from MTG’s history like Preordain and Mystic Confluence, so it works as a great prebuilt control deck.

Off the bat, Henzie “Toolbox” Torre is an amazing commander. He costs three mana, which is a great cost for a commander because you can get him out early and start utilizing his ability from the get-go. His ability gives all of your creatures that cost mana value four or more the featured mechanic from the family: Blitz. Not only that but his secondary ability discounts the Blitz cost of a card for each time he’s been played from the Command Zone. So the high-priced creatures this deck is stacked with aren’t as problematic as some might think at first glance.

This deck has a lot of great value from creatures coming into play and completely disrupting the board state to a balanced number of ramp spells to removal spells. This deck is nearly ready to be played straight out of the box with a few modifications necessary to keep up at your local gaming store. 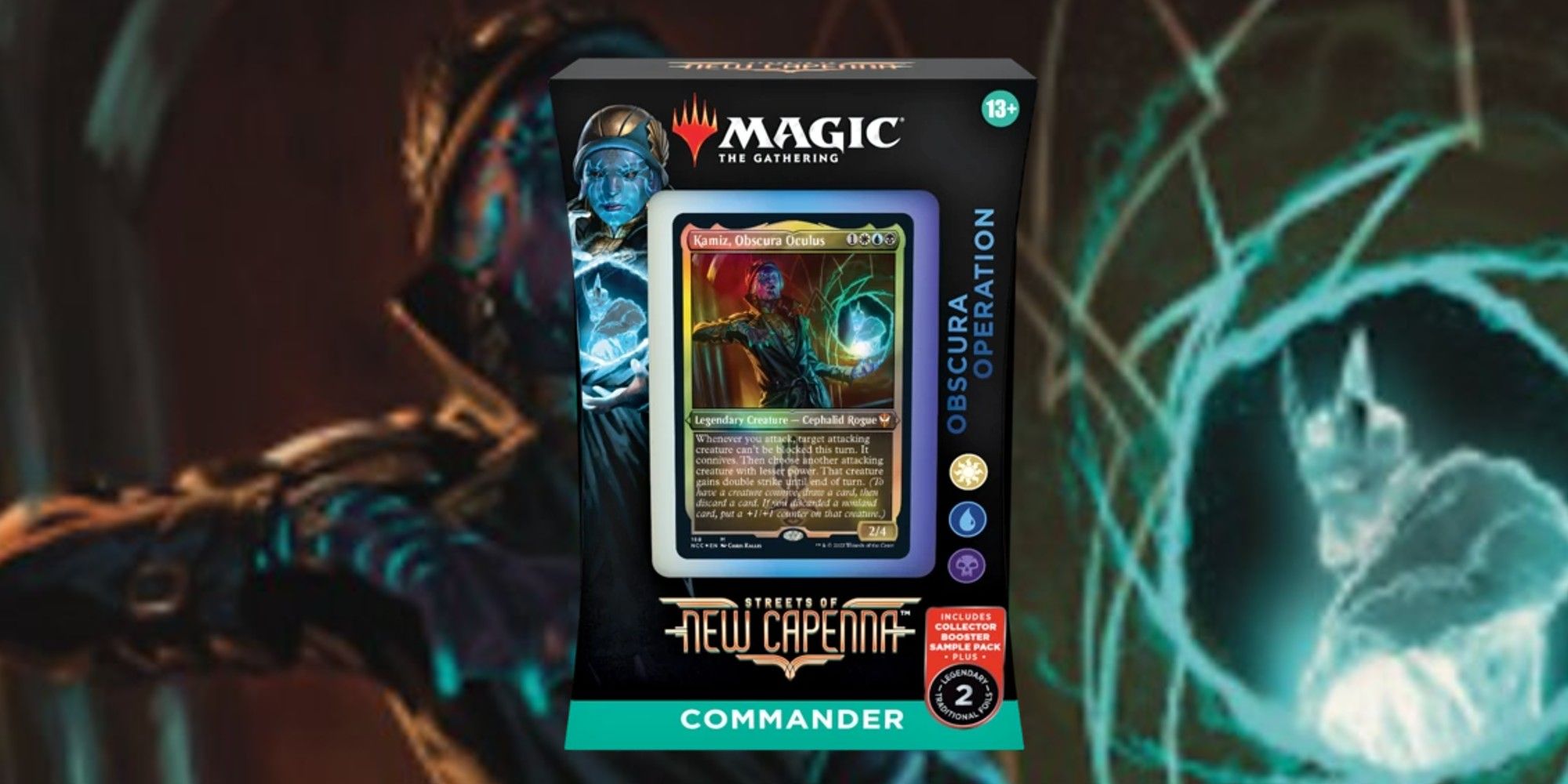 Streets of New Capenna saved its best Connive cards for its top-ranked Commander deck. It was already a pretty good mechanic, but it didn’t get a chance to shine in the main set. Here in Commander, however, it has five of the best Connive cards without focusing too much on this type of card. Obscura Operation has a solid strategy to attack with creatures and deal damage. Connive is there to simply support this strategy. Better yet, so many of its creatures have a combat damage trigger, making its commander, Kamiz, Obscura Oculus, synergistic.

Speaking of, there’s a lot of synergy in this deck with looting, recursion, and combat damage. Looter il-kor, Champion of Wits, and many other cards allow you to put cards into your graveyard while Sun Titan, Profane Command, and Writ of Return let you bring them back. It’s a solid strategy that can hold its own with little to no changes made. Also, if you want to make your value back, this is the deck to get.