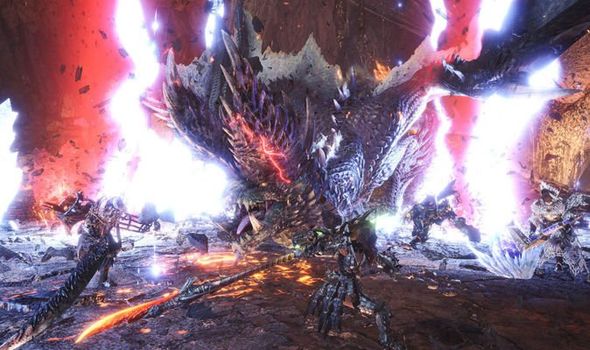 PS4 and Xbox One gamers will soon have access to a brand new Monster Hunter World update that will bring fresh challenges to the game.

July 8 will see the release of the MHW Iceborne Alatreon, among other new content.

However, It should be noted that while this new Monster Hunter World patch includes a number of new things, not everything will be available on launch day.

This means that while the Frostfang Barioth will be added to the game on July 9, it won’t be available to face in the wild until August.

Here’s what we know about the upcoming MHW release, coming July 9 on PS4 and Xbox One.

This release will be limited to PS4 and Xbox One, with a PC launch coming in the future.

The Monster Hunter World update release time has also been announced and will be scheduled for 5:00pm PDT, on July 8.

For gamers in the UK, the MHW patch will arrive a little later on July 9, at around 1:00am BST on all platforms.

Details on the new Monster Hunter World update can be found below, including news on the new encounters coming to the game in the coming weeks:

A Barioth variant capable of spewing a sub-zero breath attack that it uses to slow down prey. Be careful, as this attack can freeze you as well.

Appears in this quest as a tempered monster. Breaking both of its fangs will weaken its frosty breath. If flinched, it may shoot out a breath of ice upon recovering.