Monster Hunter Rise is here, and with a new generation, new monsters, challenges, and adventures await! No matter how big or small the enemy monster is, you will have multiple tools at your disposal to face every foe at the top of your game. This includes a variety of 14 different weapon categories to choose from, according to your playstyle.

From swift aerial attacks to supporting bugs, the Insect Glaive is one of the most unique weapons in this game, fun to play but difficult to master. Let's take a look at this weapon's attacks, Silkbind Abilities, Switch Skills, and more to learn how to master the Insect Glaive. 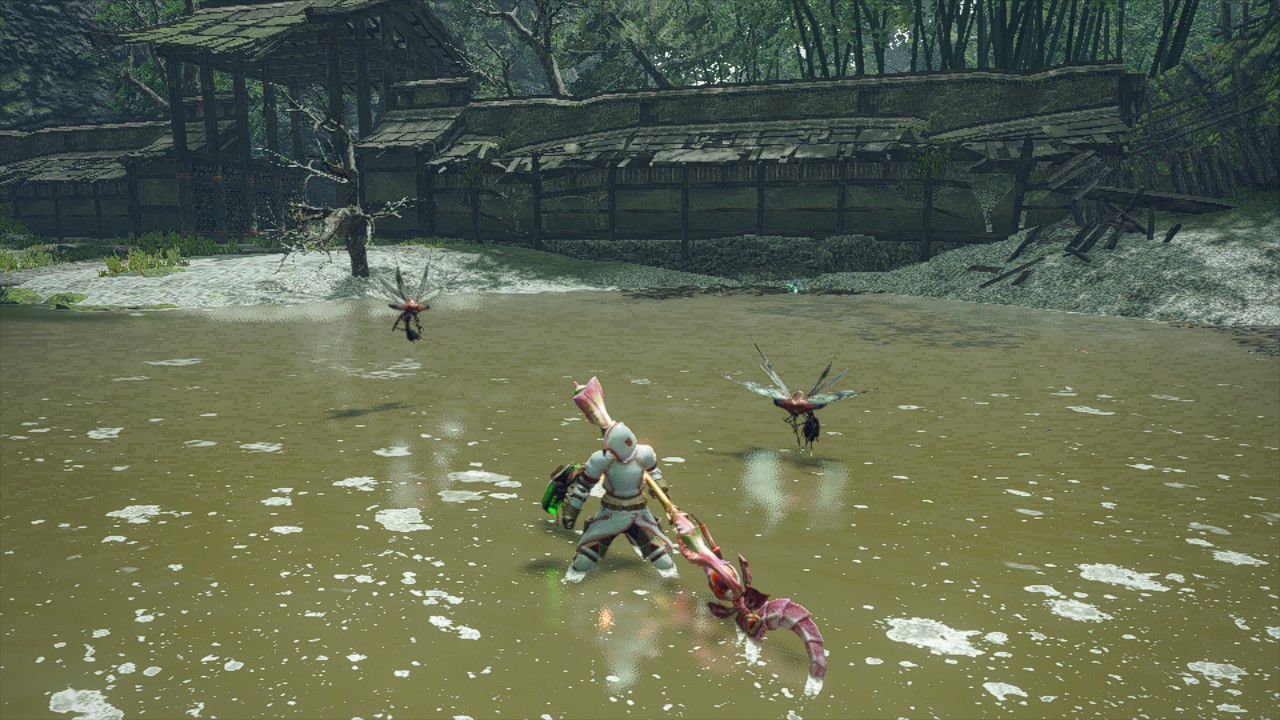 The Insect Glaive is a fast-hitting spear-type weapon that will have you bouncing around the monster and pulling off combos with your Kinsect. Below are the weapon's controls on the ground. Your X and A attacks can combo interchangeably.

The Insect Glaive's key feature is its accompanying Kinsect, an insect that will assist in various attacks and aid the hunter by gathering extracts. The Kinsect has a stamina bar that decreases when it is not mounted on your arm. While sent out, the Kinsect will sit patiently where it is directed but will strike the area once where it lands. Effective use of the Kinsect requires some micromanaging, so let's take a deeper look at it below.

The Kinsect and Extracts 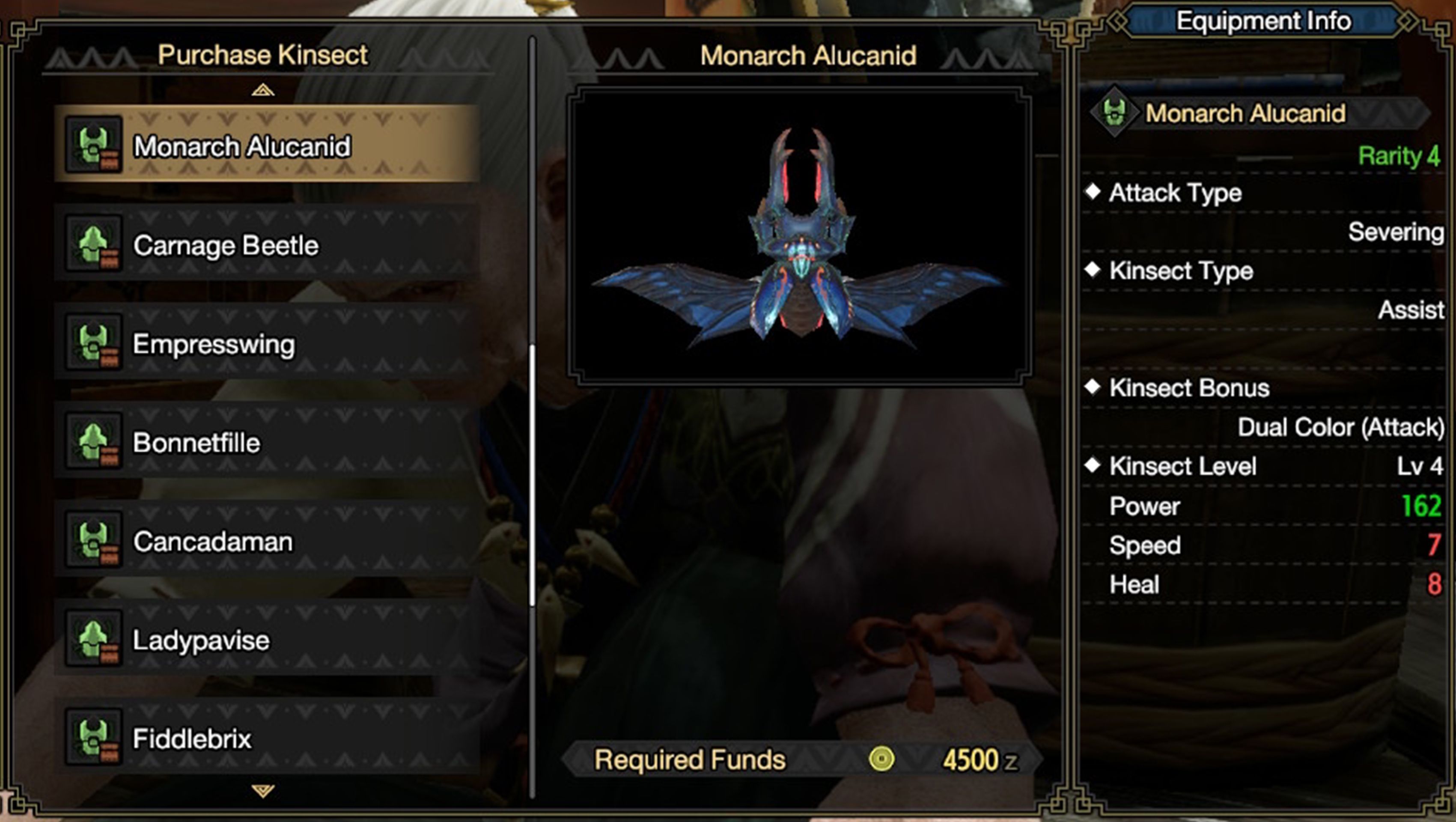 ​​​​​The Kinsect's main use in battle is to gather extracts. There are three types of extracts, listed below.

Gathering all three colors of extracts will additionally grant the effects of Earplugs and Flinch Free, allowing you to negate the stun from a monster's roar, as well as preventing knockbacks and tripping.

In addition to boosting attack, red extract will add more hits to each attack, increasing overall damage and number of strikes. This extract is absolutely essential to playing Insect Glaive, so always make sure to have it.

The Insect Glaive has access to a few different Kinsects that can be equipped to any weapon. This means you can mix and match Insect Glaive and Kinsect. Each Kinsect has a type and a special bonus. 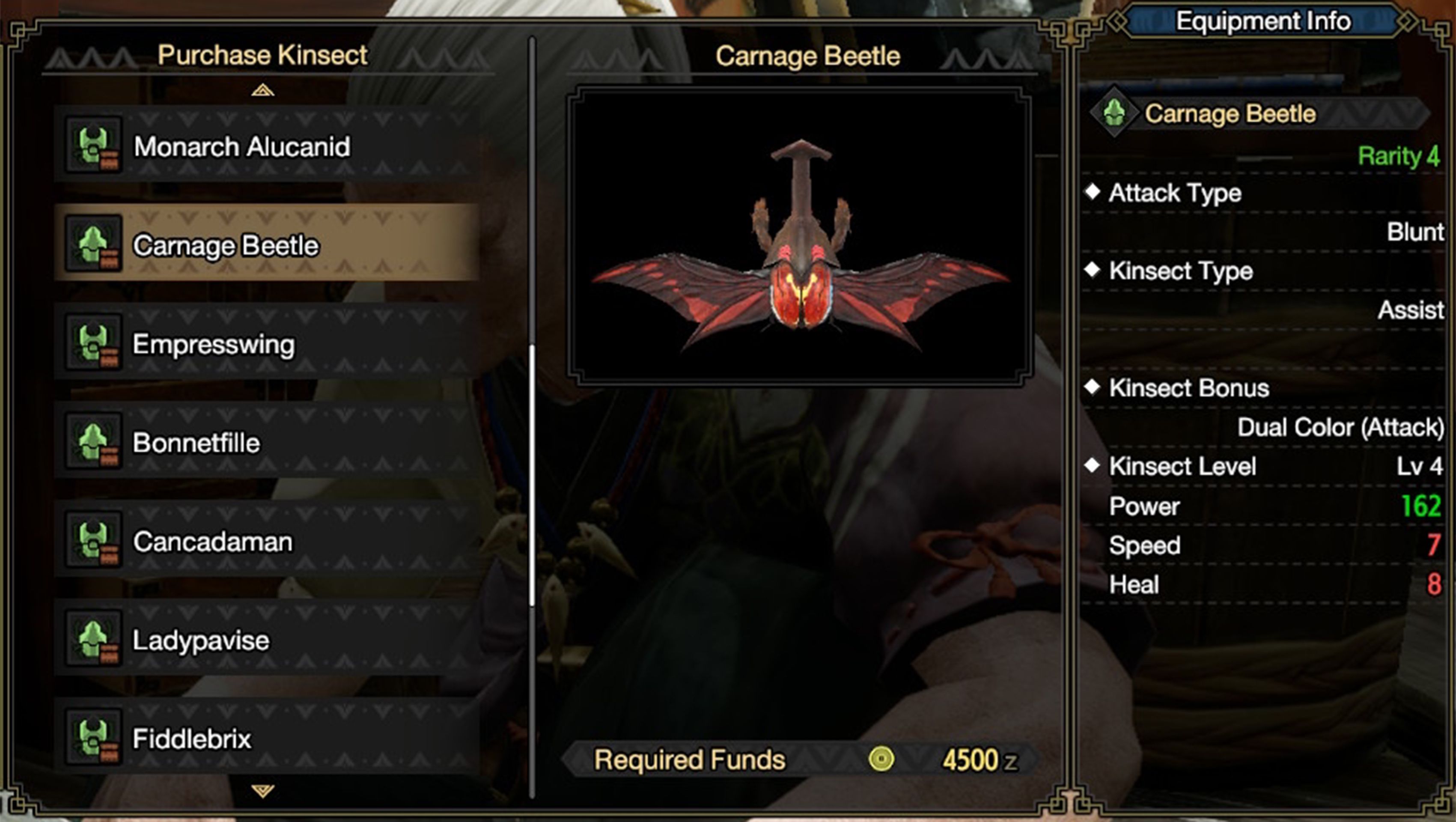 This is a lot of information, and it may be hard to choose which Kinsect to use. If you're struggling to pick one, we recommend the Dual Color (Attack) Assist type Kinsects; Carnage Beetle or Monarch Alucanid. These Kinsects make gathering extracts much easier, which means you can focus on taking down the monster rather than trying to gather its extracts.

Assist Kinsects are strong because they will add additional damage to your strongest attacks, but only when you have all three extracts. The added damage from the Kinsects attacks makes Assist types outshine the other Kinsect types when compared for raw damage output.

This Silkbind Ability is just one of the Insect Glaive's many tools for getting into the air. While it is faster than Vault, it also costs one Wirebug, which could be used for either another Silkbind Ability or a Wirefall Recovery.

Silkbind Vault can be used in the air, while Vault can't. This means you can use this ability to "reset" your aerial actions, letting you gain more air time, dodges, and attacks. Try to use this ability when you're in the air, rather than on the ground, where a regular Vault would be more efficient.

Recall Kinsect (ZL+A/B): An emergency evasion performed with a Wirebug that recalls your Kinsect. Upon activation, it will perform a spinning attack that can gather a healing extract. Once it returns, its stamina will fully recover.

This ability is strong when used correctly, but it is entirely defensive in its application. Especially when considering Recall Kinsect is a Switch Skill, and is competing directly with Diving Wyvern for the spot. However, this ability can still be viable in support-focused Insect Glaive builds for multiplayer.

Diving Wyvern (ZL+A/B): A devastating dive attack that uses a Wirebug to pull you downward with great force. The attack has a small damage radius, but that means the damage is highly focused.

This Ability has very high damage and can be used on the ground and in the air, making it a versatile and fast method of dealing a lot of damage. Try to aim for the monster's head or other weak points for the best results. 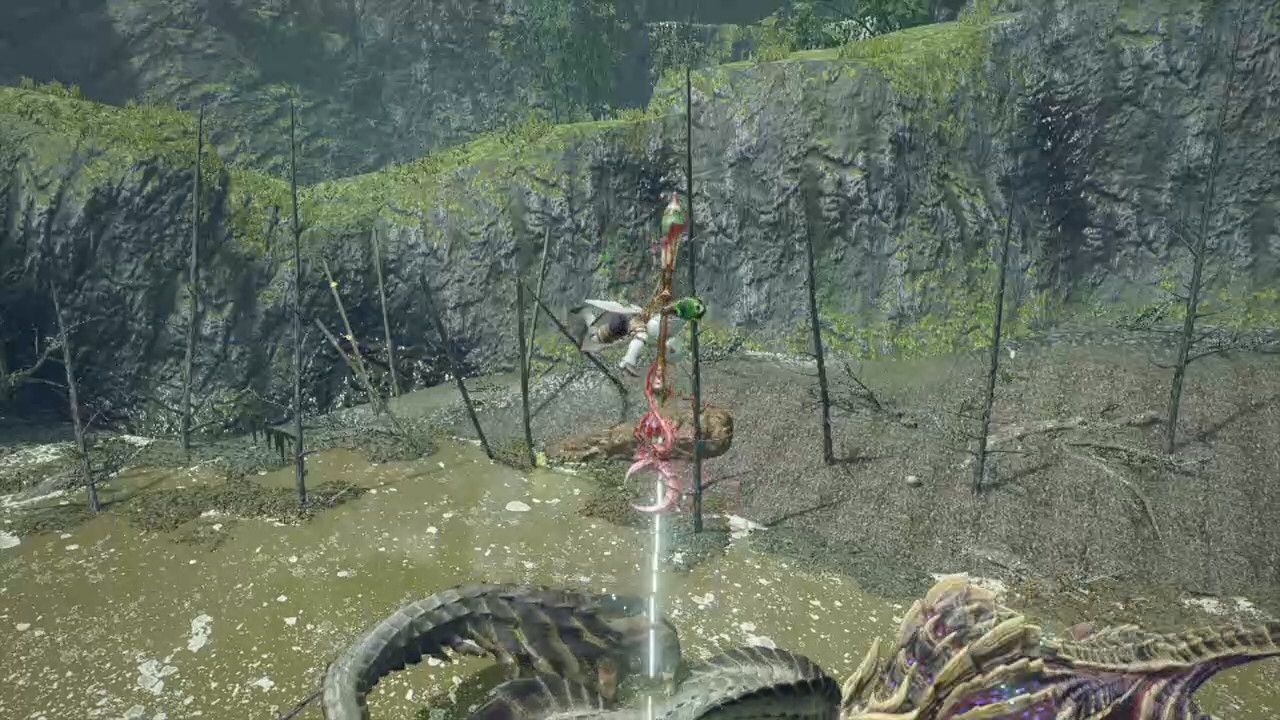 These skills will change your draw and A attacks. Advancing Round Slash does more damage because of its multiple strikes, but has a charge-up time and launches you forward, which can be tricky to use efficiently. Leaping Slash is the better choice because of its ability to close the gap between you and the monster quickly and has a more consistent damage output.

A secondary feature of Advancing Round Slash is that it will launch you into the air if you have momentum on the ground. This effect is tricky to pull off, and given the number of other methods Insect Glaive has of getting into the air, isn't unique enough to warrant picking over Leaping Slash.

These skills are similar in their usage, but their animations make using them feel different. Ultimately, use whichever skill feels better to use, as they function roughly the same, and their damage and applications are also very similar. 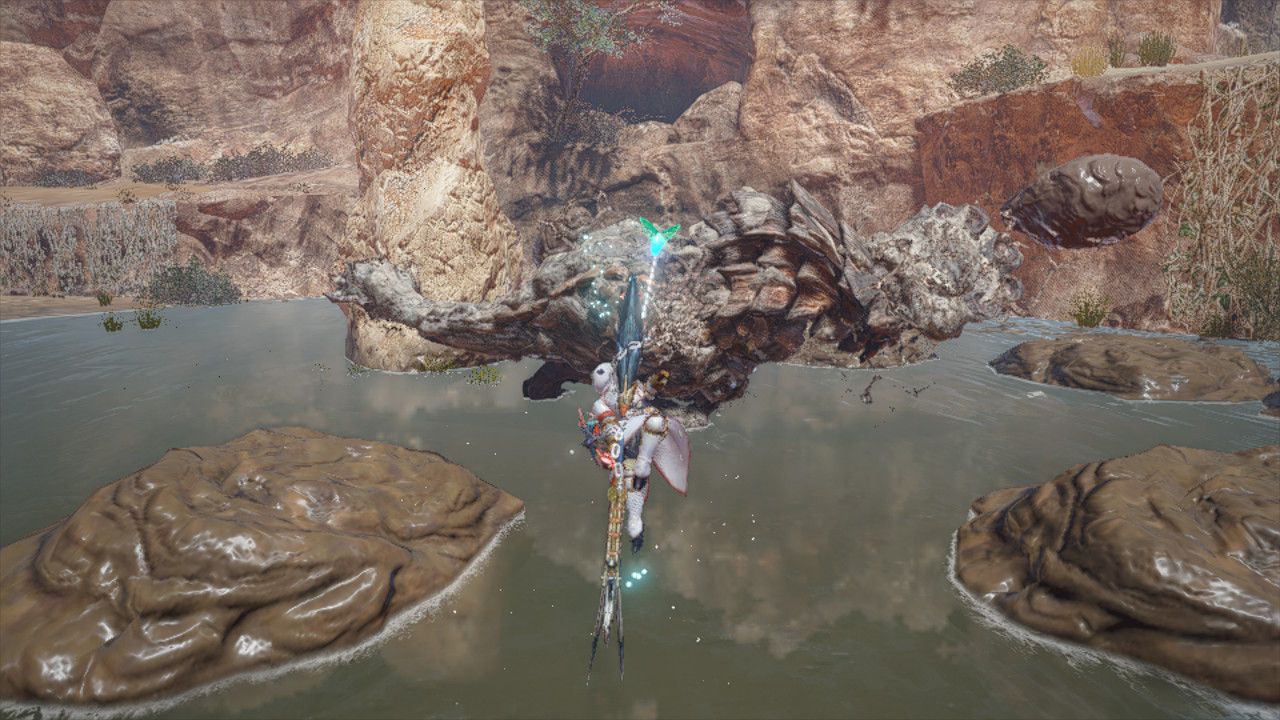 Triple Extract Upkeep: Without its buffs, the Insect Glaive is rather weak. At the very least, the red extract is absolutely necessary for the weapon, and the other extracts will make your hunts go much smoother. Always try to have all three buffs active. If you don't have them active, focus entirely on getting them.

Finding the right spot on the monster to get the extract can be tough, so try using the Dual Color type Kinsects. This bonus will make gathering extracts much easier. This is especially true for Dual Color (Attack), which will ensure you at least always have red extract active.

Maintaining Sharpness: While under the effects of the red extract, the Insect Glaive will hit a few times during each attack, which can lead to a fast loss of the weapon's sharpness. Luckily, the Insect Glaive has an innate 33% chance of not losing sharpness on each attack. Paired with the skill Master's Touch, you can maintain full sharpness for much longer. Paired with a white sharpness weapon like Nargacuga's Evening Calm or Valstrax's Reddnaught Shuma, you'll be able to stay at high damage and sharpness for a majority of the hunt.

Utilizing Your Kinsect: The Kinsect is able to interact with elements of the environment like Flash Flies or Butterflames. Launching your Kinsect at a Flash Fly to flinch the monster when you're out of range to hit it yourself can quickly turn the tide of battle in your favor. Note that these actions are much easier to execute with a speed type Kinsect, but all types are able to interact with endemic life.

Aerial Attacks: The Insect Glaive has unique access to easy aerial attacks, which can make mounting monsters much easier. Pressing A while in the air will have you perform a spinning strike, the last hit of which will bounce you back up into the air, allowing for other aerial maneuvers. Additionally, each time you bounce off the monster, you will gain a 10% damage buff up to two times for a total of 20% increased damage. Diving Wyvern will also receive a damage buff of 20% for the first bounce, 50% for the second bounce, and 100% for the third bounce.

You can time your aerial attacks to make landing the final hit easier. When you're in the air, simply wait until you're closer to the ground before pressing A. Additionally, you can reposition with B to get into a better spot to hit the monster more times.

Aerial attacks can be extremely powerful when used against enemies with large hitboxes like Kushala Daora and Teostra. Stacking up the damage buff from bouncing on top of the monster before finishing with a Diving Wyvern can lead to massive damage. However, keep in mind that this playstyle shouldn't be used exclusively. Insect Glaive's grounded attacks have higher base damage, and are much easier to land, especially against a knocked-down monster.