You are here:
Home / Minecraft: How To Use The Allay To Collect Items

Minecraft: How To Use The Allay To Collect Items

Each year at MineCon Live, Minecraft's developer Mojang holds a vote for players to choose a new mob or biome to add to the game. In 2021, the mob vote saw the Glare, the Allay, and the Copper Golem battle it out to be Minecraft's latest addition.

After an incredibly close final round of voting, the Allay beat out the Copper Golem, and the cute, music-loving creature was added into the game as part of the 1.19 Wild Update. The Allay is more than just adorable, though – it can make itself useful by retrieving items for the player, so if you want a floating blue pet of your own, here's everything you'll need to know.

What Is The Allay? 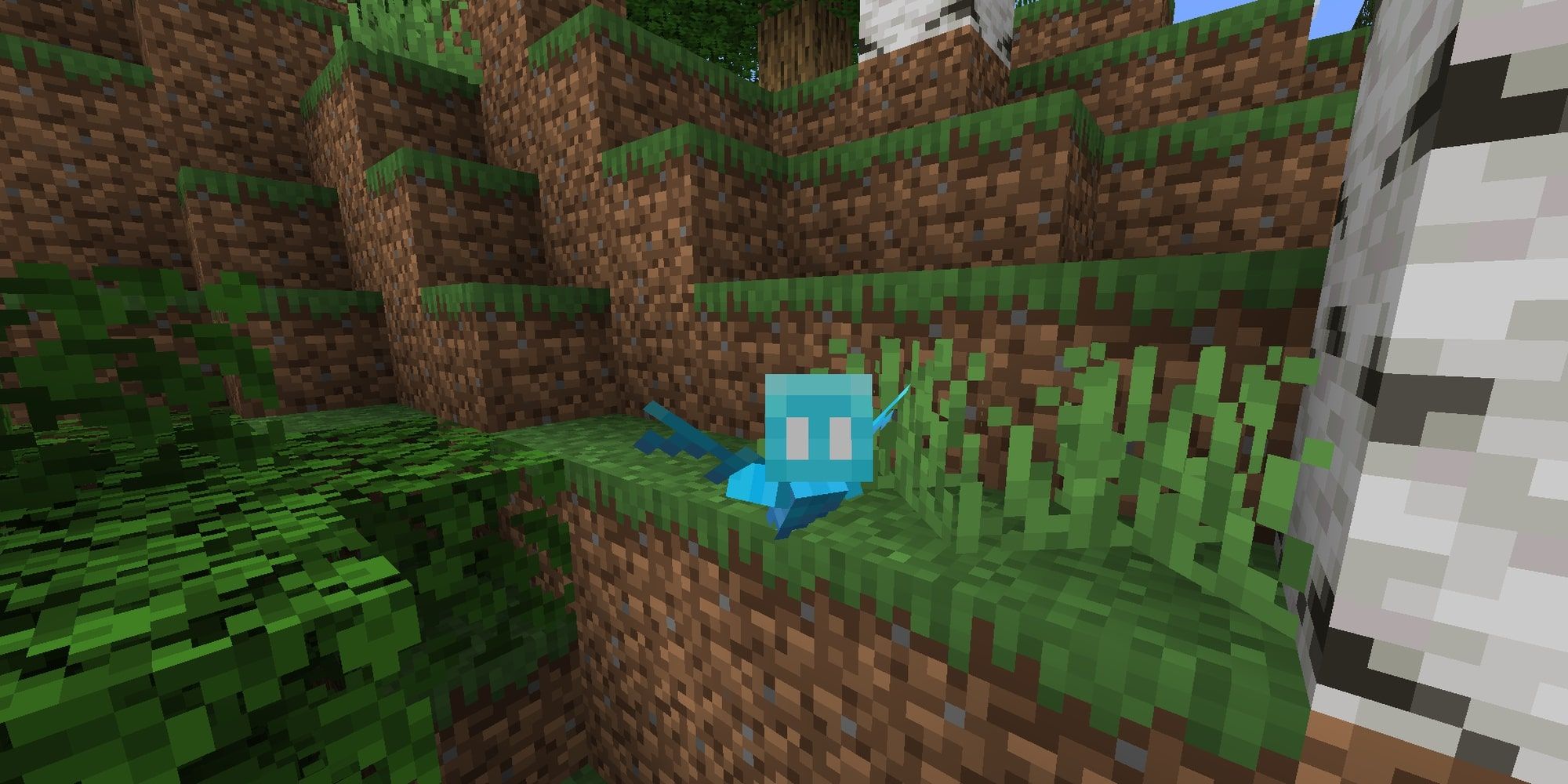 The Allay is a very small light blue mob that floats around, resembling the Evoker's Vexes both in its size and how it moves. The Allay's main purpose is fetching items for the player – once you tell it what to look for, it will go out and grab any matching block or item it sees, and bring it back to you.

Allays have a natural health regeneration of two hearts per second, and cannot be hurt by whoever they're fetching items for, so you shouldn't have to worry too much about any harm coming to your little blue friend. One thing to note is that unlike Vexes, they cannot pass through walls, and they also cannot enter water.

How To Get An Allay 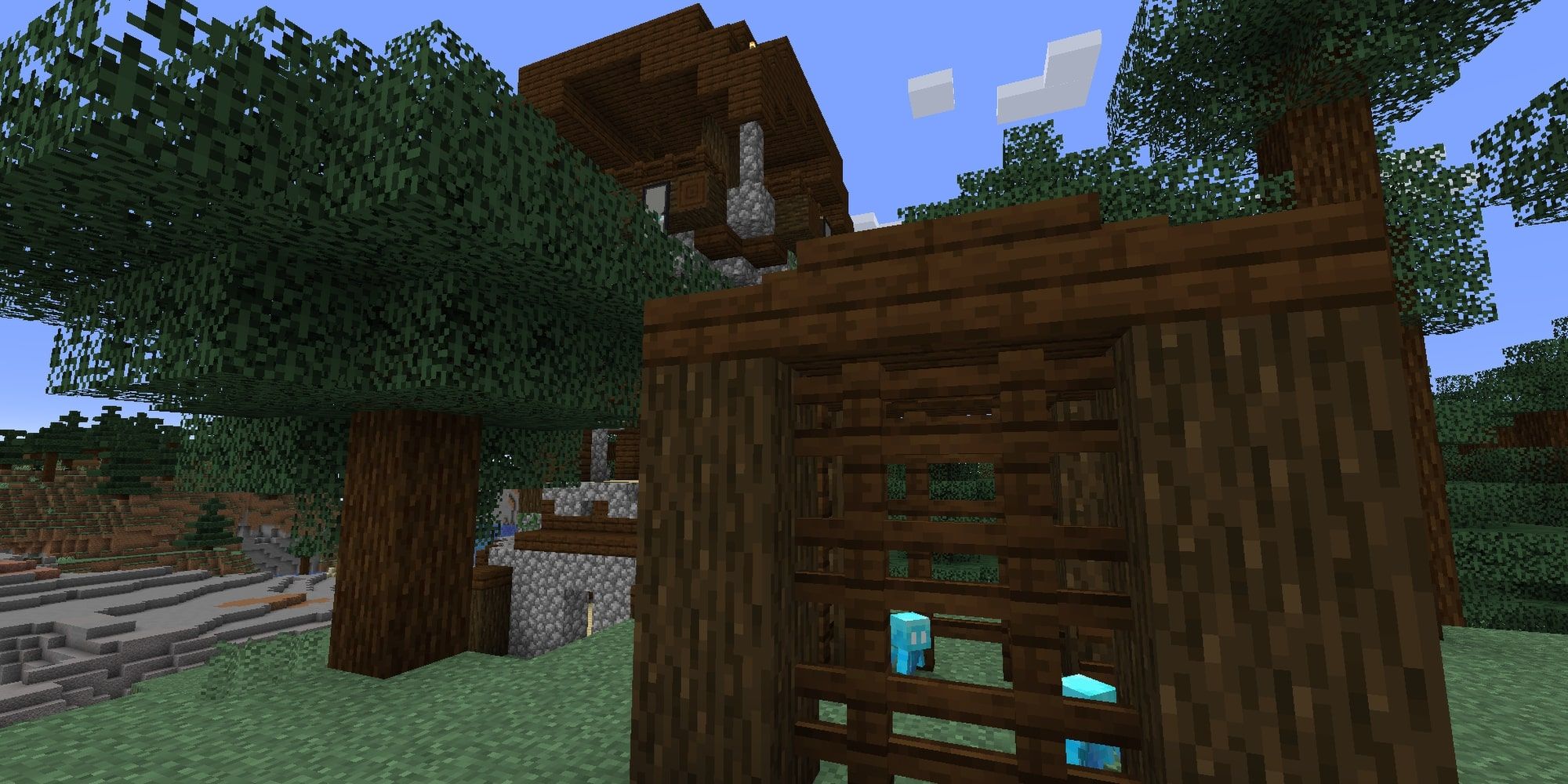 It's important to note that Allays are not guaranteed at these structures. An Outpost may generate without any Allay cages, and similarly, a Mansion may have no jail cell rooms. Be prepared to travel to multiple Illager structures if you get unlucky. It should also be noted that Allays do not spawn renewably. Any Allays within these structures will be spawned upon the structure's generation, and after that, no more can spawn – similar to the Illagers in a Mansion or the Elder Guardians in an Ocean Monument.

How To Breed Allays

At 1.19's launch, those were the only ways to get Allays, but fortunately, they are actually renewable as of 1.19's first patch. If you play music in a jukebox with an Allay nearby, the Allay will start to dance by bobbing its head side-to-side. While it's dancing, you can give it an amethyst shard, which will cause it to emit hearts the way animals do when you feed them to put them into love mode. The Allay will then clone itself, and you now have two Allays.

Both the original Allay and the clone will have a two-and-a-half minute cooldown before they can do more cloning, but this welcome change means you can obtain more Allays without having to trek to one Woodland Mansion after another.

How To Use The Allay To Collect Items 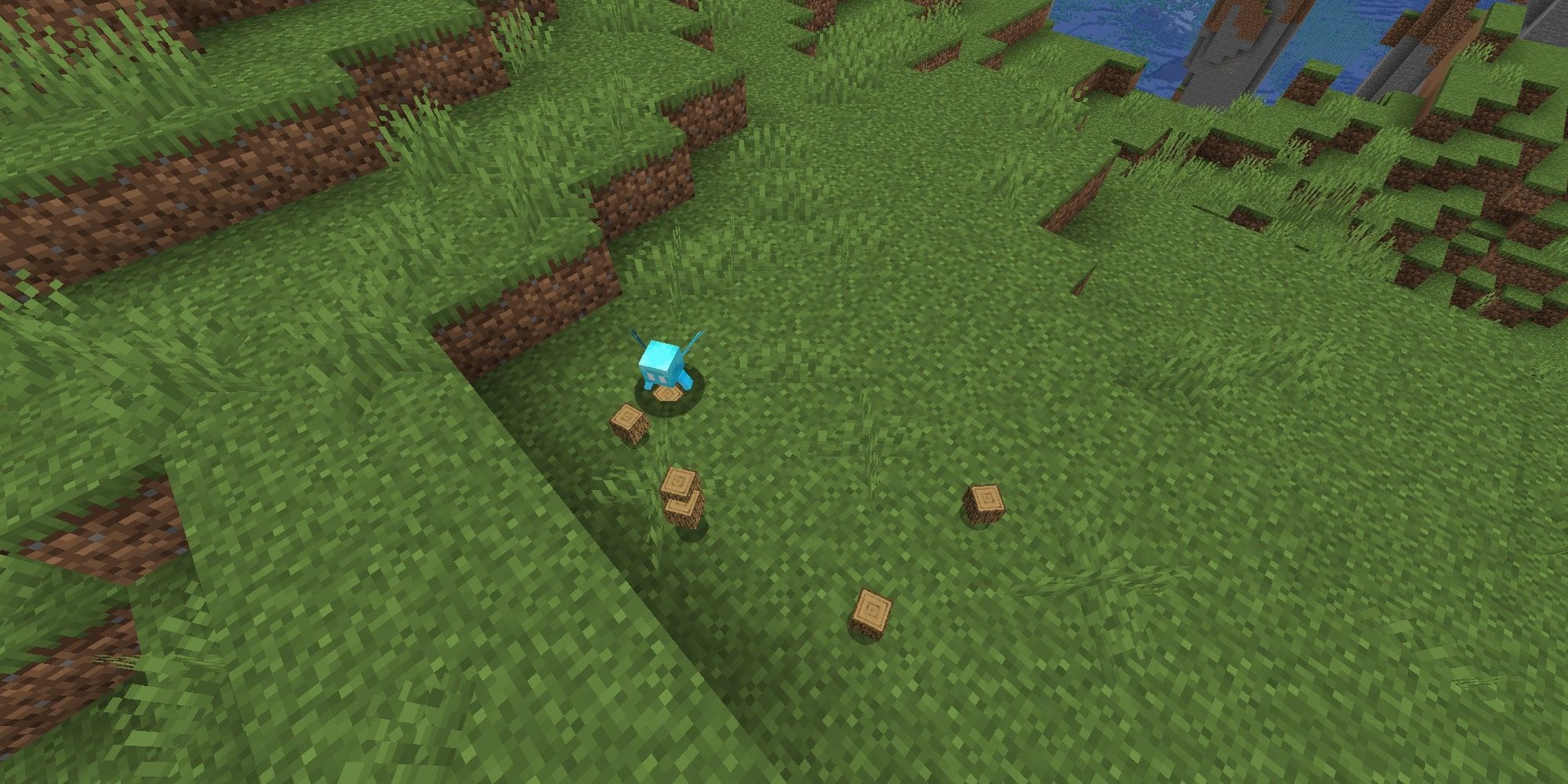 Once you have your Allay (or several Allays), you'll probably want to put it to work. To tell the Allay what you want it to collect, hold the item in your hand and use it on the Allay by right-clicking or pressing your controller's use/place block button. This will give the item to the Allay, at which point that Allay is yours. This means it will follow you around, and you cannot hurt it. The item the Allay is holding and looking for is always visible, as it holds it in its hands.

The only items you can't give an Allay are leads and name tags, as attempting to use this will actually use them, and they'll perform their normal function. You can give an Allay a Totem of Undying, and it will go out looking for more as normal, but if the Allay dies while holding this item, the Totem will activate and be consumed, as the Allay is resurrected to full health.

Once the Allay has its item, while following you it will be on the lookout for more of that item sitting on the ground nearby. If it sees any it will go to them, pick them up, and bring them to you. The Allay can't break blocks – it just looks for items on the ground, the kind you yourself could walk over and pick up.

As the Allay is fetching items, it will periodically return to you and throw you what it's picked up, like a dropper. It will retain the original item you gave it so it still knows what it's looking for. The exact range in which the Allay can detect items is 32 blocks, so it can cover a fairly large area, and in the event you become separated further, the Allay can still pathfind towards you from up to 64 blocks away.

If you want to take back the item you've given the Allay, either to give it something else or just to stop it fetching things, right-click or press your "use" button on the Allay with an empty hand. This will return the item to your inventory, assuming you have space to take it and clear the Allay's slot to take another item to look for.

The fact the Allay can fetch non-stackable items such as weapons and armour is exciting, as it opens up the possibility of non-stackable item sorters – something that wasn't previously possible in Minecraft. If you wanted your storage system to sort different kinds of swords in addition to all the blocks it sorts, you could have an Allay section with six Allays, each holding one type of sword, that would retrieve the corresponding swords as they came through the system.

How To Use Allays With Note Blocks 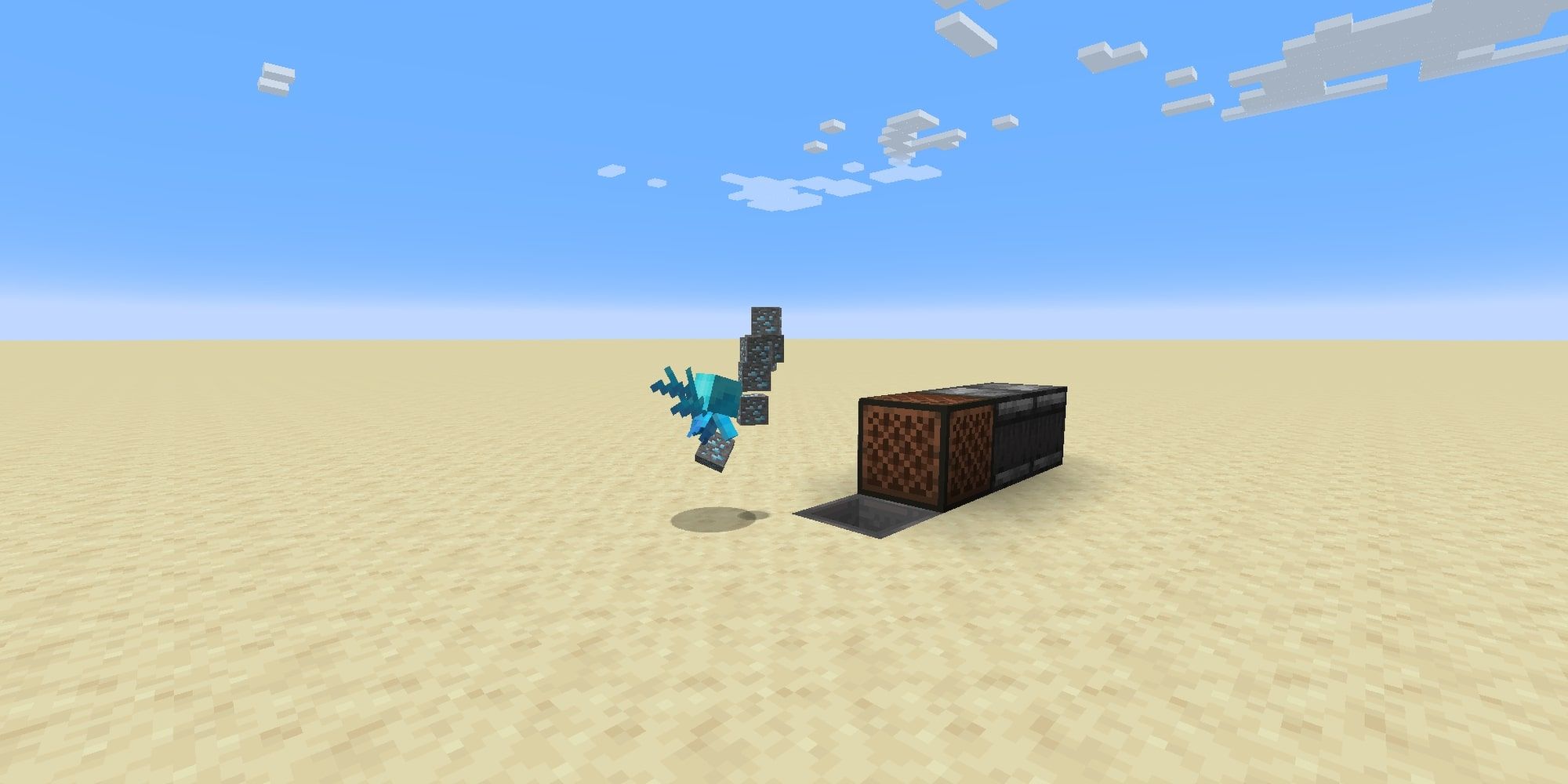 Of course, the problem with that sorting system would be that you'd need to stand there for the Allays to bring the swords to you, and since they're just being thrown into your inventory, they're not really "sorted" at all. This is where note blocks come in, as they're the key to any sort of Allay automation, from simply having the Allay put items into a chest for convenience, to full-on, massive sorting systems.

The Allay's love of music goes beyond its jukebox cloning dance. Whenever an Allay hears any sort of sound played on a note block (the instrument and pitch don't matter), that note block will become the Allay's favourite. For the next 30 seconds, instead of throwing any items it's picked up to you, it'll throw them to the note block instead.

This is incredibly useful, as it allows you to place a hopper next to the note block to automatically pick up what the Allay is throwing. If you want to keep your inventory clear while you're having the Allay pick up sand for you as you quarry it en masse, simply set up a circuit to activate a note block every 30 seconds and have the Allay throw the sand into a hopper below, which can lead into some chests or Shulker boxes for easy collection.

A particle effect will show when an Allay becomes connected to a note block, and when multiple note blocks play, an Allay will always choose the nearest one, meaning you can fit many Allays – each with their own note block and hopper – into a small area for sorting by having each one directly next to a different note block, and sounding the note blocks simultaneously.

The Allay is both a useful helper and an adorable friend, and it offers huge potential for moving and sorting items. It was a worthy winner of the mob vote, and a fantastic addition to the game, so have fun tracking down, cloning, and using Allays in your Minecraft worlds!