You are here:
Home / Minecraft: How To Use Sculk Sensors To Make Wireless Redstone

Minecraft: How To Use Sculk Sensors To Make Wireless Redstone

The Wild Update brought the Deep Dark to Minecraft — a spooky biome lurking deep underground containing the remnants of cities from past civilisations, guarded by a terrifying monster. Lining almost every surface in this unsettling environment is a mysterious substance known as sculk, which interacts with sound in curious ways.

There are numerous blocks and materials within the sculk family — sculk catalysts turn nearby blocks into sculk when mobs are killed in the vicinity, and that sculk contains the XP the dead mobs would have dropped. Sculk shriekers emit a scream when triggered that can summon the Warden, but perhaps the most interesting of all are sculk sensors, which enable redstone to work wirelessly.

What Are Sculk Sensors And Where Can I Find Them? 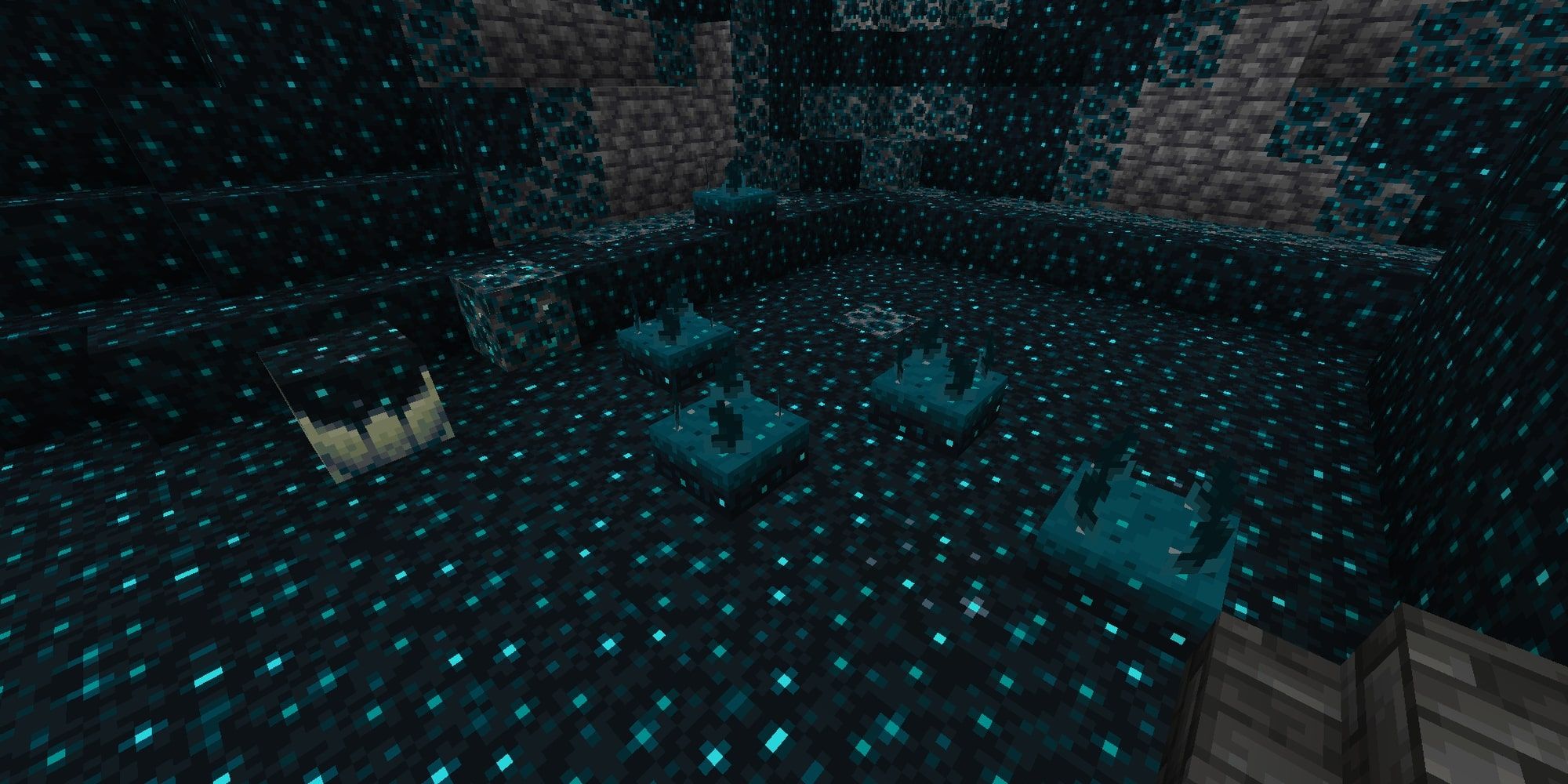 Sculk sensors are special sculk blocks that specialise in detecting and passing on vibrations. The ideas of sound and vibrations are sort of motifs in the Deep Dark, as shriekers are activated by receiving vibrations and sound is the Warden's main way of detecting its prey. What's special about sculk sensors, though, is that not only can they detect nearby vibrations for their activation, but when they do activate, they can interact with redstone.

Sculk sensors generate naturally anywhere in the Deep Dark, both within and outside of Ancient Cities. Any patch of sculk you can see has the chance to generate with sculk sensors on it. Furthermore, if a mob dies in the vicinity of a sculk catalyst, and there are no other sculk sensors nearby, the catalyst has a nine percent chance of producing a sensor as part of the sculk it generates — provided it has enough XP. This works both with catalysts in the Deep Dark, and ones that have been brought elsewhere.

How To Obtain Sculk Sensors 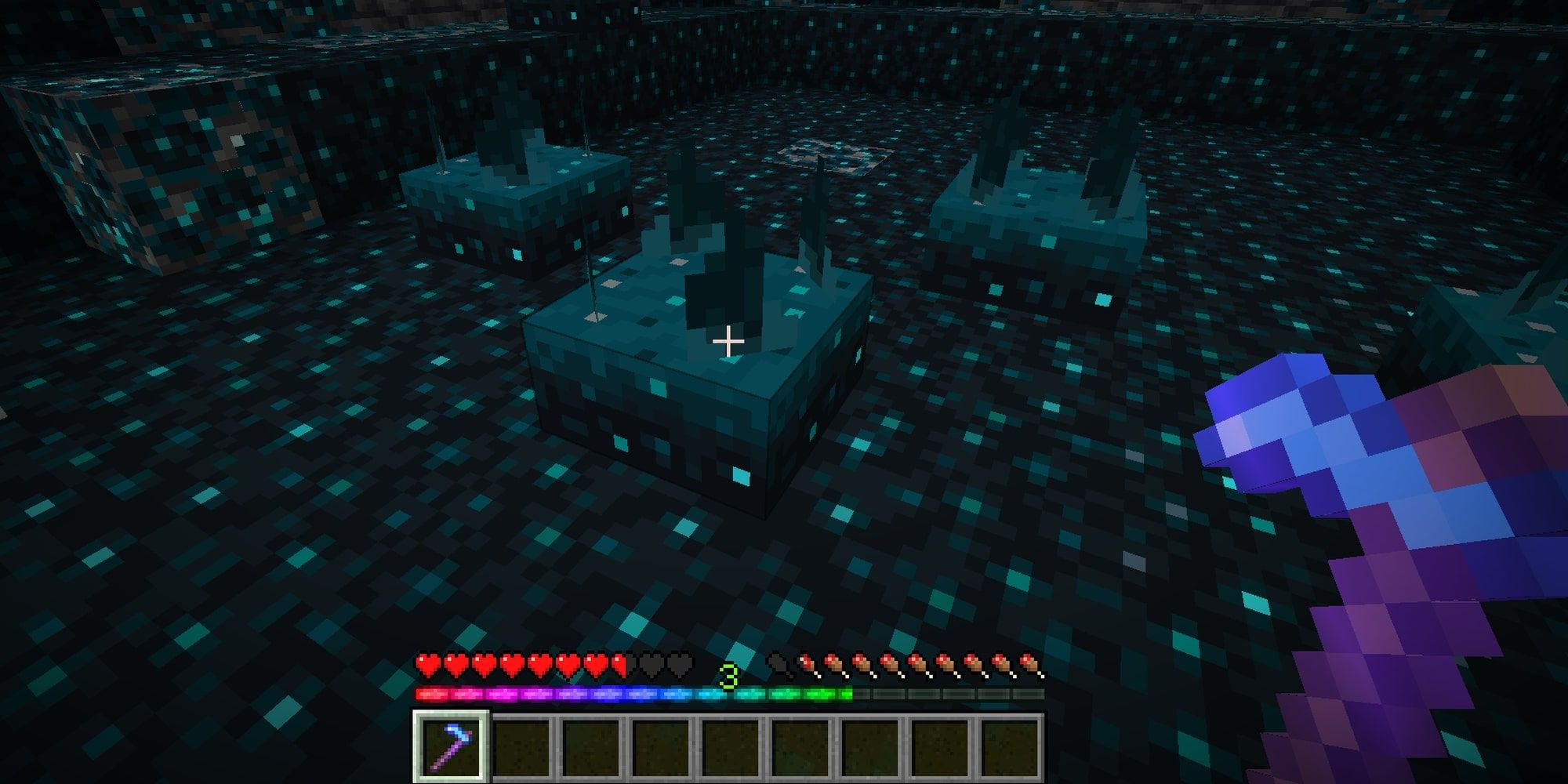 If you want to pick up a sculk sensor you've found to be able to use it for your redstone, you'll need to mine it with a tool enchanted with Silk Touch — hoes are fastest for all sculk-based blocks. However, finding sensors on the ground in the Deep Dark and having catalysts generate them aren't the only ways of getting them.

All chests within Ancient Cities, except for ice box chests, have a 23.2 percent chance of spawning with between one and three sculk catalysts inside. This allows you to get your hands on some without needing Silk Touch.

How To Transmit A Redstone Signal Using Sculk Sensors 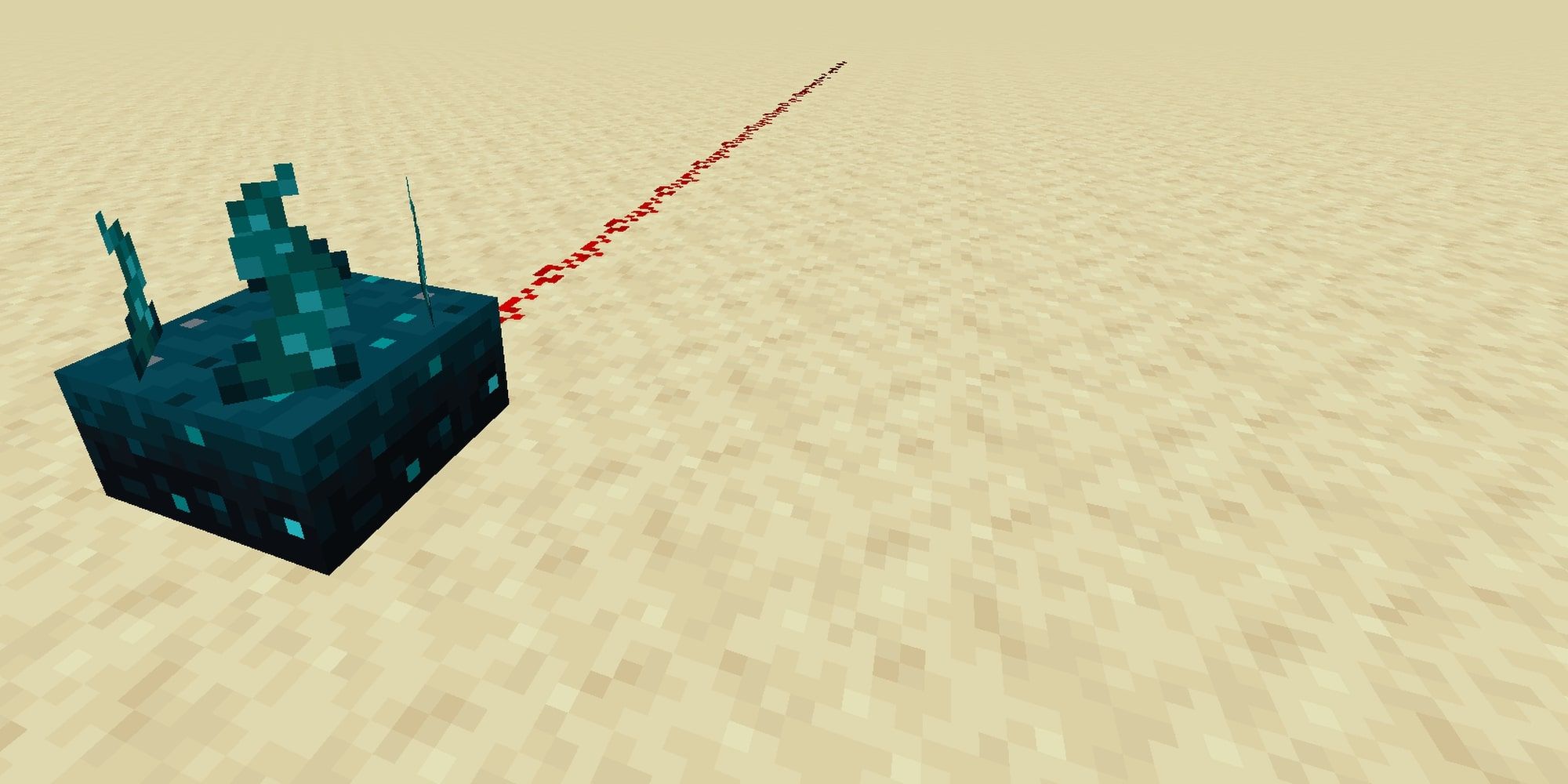 Sculk sensors will detect any vibrations within a nine-block radius around them, and when they do, they'll emit a redstone signal. How far sculk sensors can send a signal is dependent on how close the vibration was to the sensor. A vibration directly on top of the sensor will produce a signal with a strength of 15, while one nine blocks away will yield a signal strength of one.

Vibrations are more or less anything that makes noise — walking, jumping, eating, placing blocks, and so on. Performing any of these activities near a sculk sensor will activate it, and cause it to emit a redstone signal. This makes them great for detecting players or mobs — vibrations travel through walls, so hiding a sculk sensor to detect nearby players and activate a defence mechanism would make an excellent trap. You can even waterlog it, to prevent it making noise and tipping intruders off.

How To Use Wool With Sculk Sensors 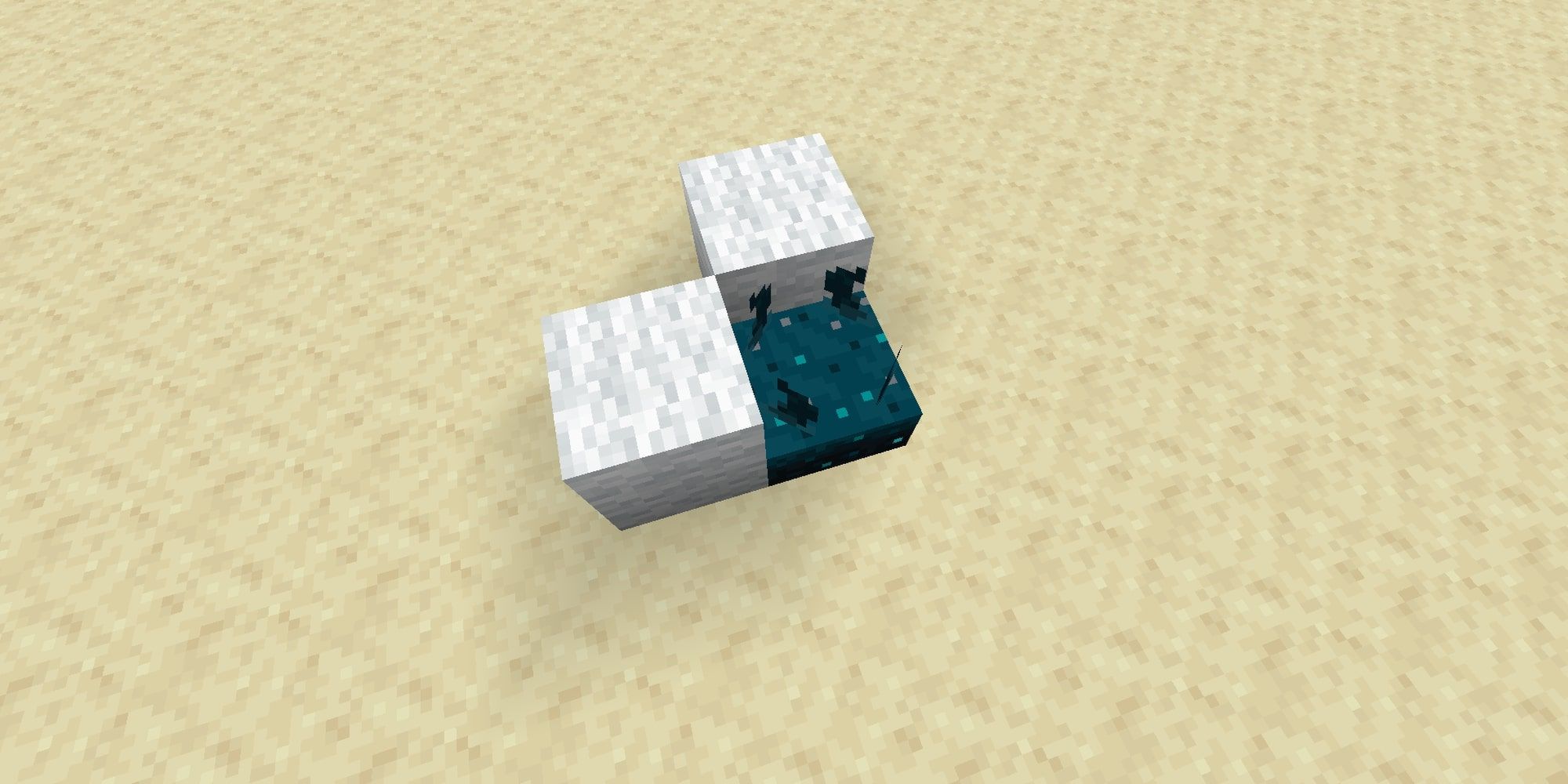 Perhaps you don't always want your sculk sensor to direct vibrations, though — or maybe you only want to detect vibrations from a specific direction. This is where wool occlusion comes in. This fancy term just means using wool to dampen vibrations and prevent a sensor picking them up, as wool is the only block vibrations can't travel through.

Vibrations will always travel towards the sensor as the crow flies, so any vibrations that would have to pass through wool simply won't reach the sensor. In a similar vein, walking on carpet produces no vibrations, and placing or destroying wool doesn't either.

This is useful in many scenarios. For the aforementioned trap, you can occlude all directions aside from the one you're expecting intruders to come from, to avoid setting off your own trap as you move around your base. It's also very handy for larger redstone contraptions with lots of moving parts — you can make it so the sensor is only triggered when you want it to be, as opposed to being set off by random pistons and dispensers. 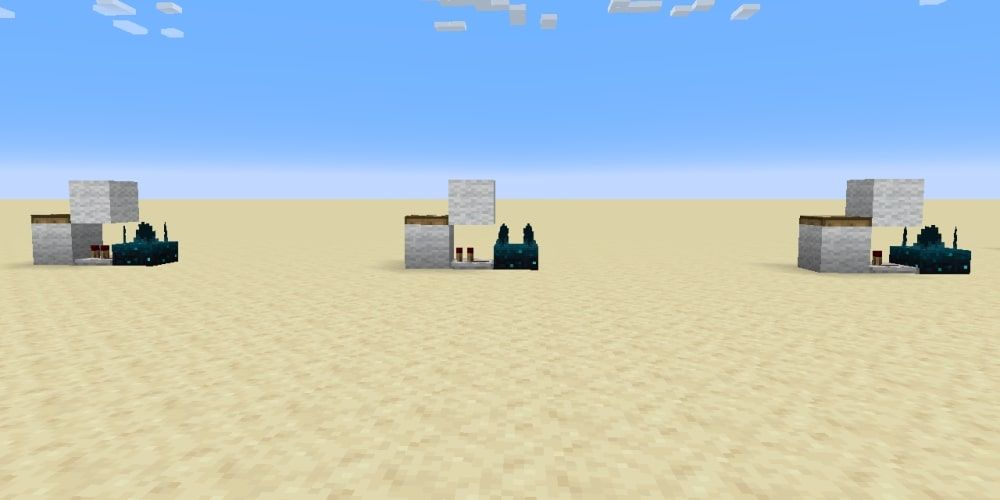 Wool occlusion is part of what gives sculk sensors such excellent potential. Because they emit redstone signals when activated, you can have a sensor activate something that makes noise when it's triggered, like a trapdoor, but occlude the sensor in such a way that the trapdoor won't reactivate it. Instead, the trapdoor triggers another sensor nine blocks away, and this can repeat infinitely. Wireless redstone!

How To Use Comparators With Sculk Sensors 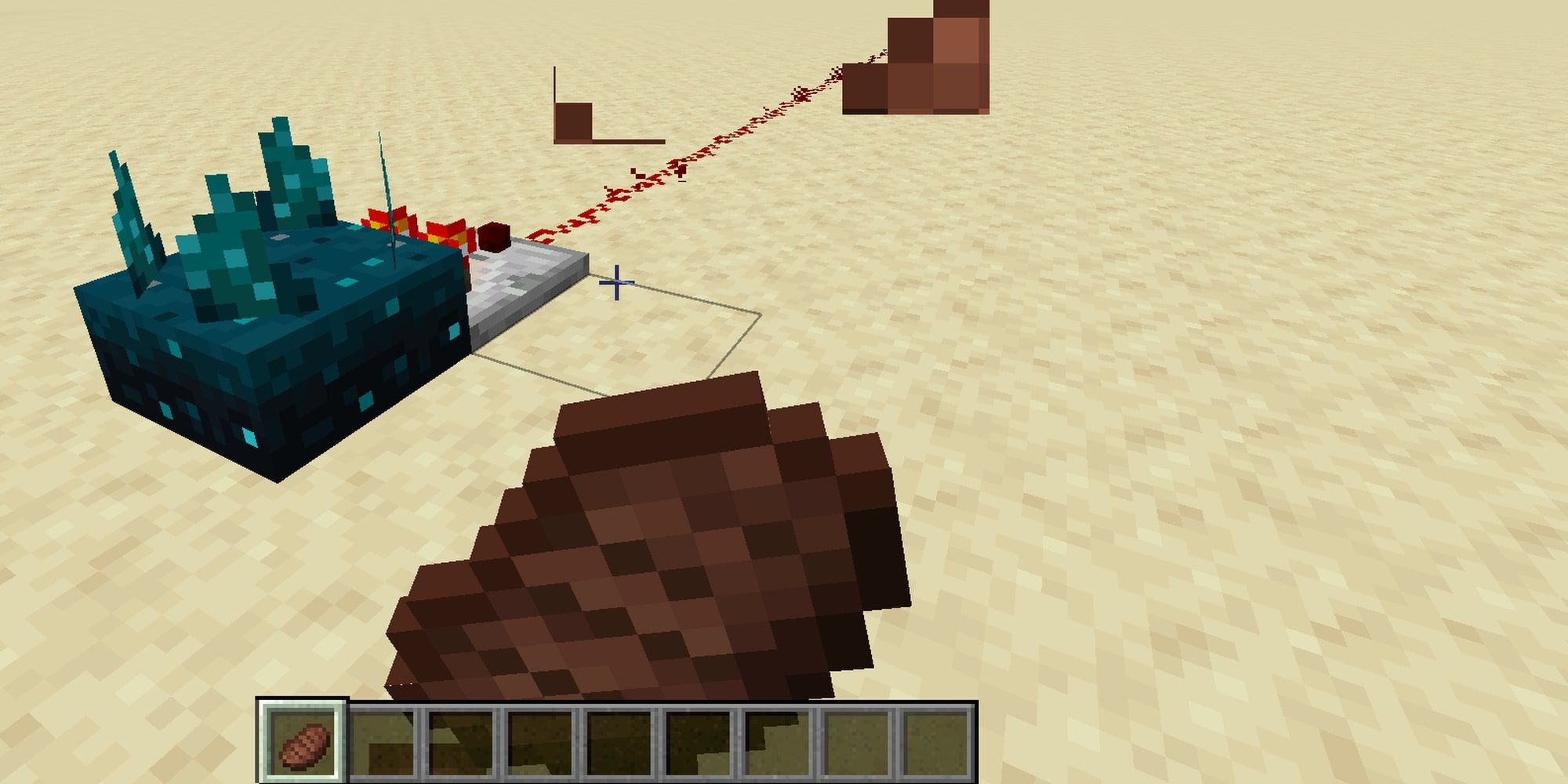 As if redstone going wireless after over a decade in the game wasn't enough, sculk sensors can do even more. Like many blocks, they can be hooked up to a comparator, which produces outputs of various signal strengths depending on what the block in question is doing.

With sculk sensors, the comparator can actually detect what vibration the sculk sensor is picking up. Each type of vibration corresponds to a different strength of output, which opens up almost limitless possibilities for how sculk sensors can be used as detectors. Here's a full lists of the types of vibrations and the signal strengths they correspond to:

With this, along with some clever comparator circuitry, you can detect pretty much anything you want. If you need to detect someone specifically swimming into your base, you can. If space for redstone behind the wall you want to put a button on is tight, you can have a button that isn't actually wired to anything, but still activates a circuit with the sound of it being pressed. How about a circuit that detects when the rain has stopped, using a dog shaking itself dry?

Sculk sensors are a fantastic addition to the pool of redstone components, and their interactions with redstone, wool, and comparators allow for not only wireless redstone, but a level of detection never before seen. They can seem a bit complex at first, but jump in and experiment, and you'll be making all kinds of exciting sculk contraptions in no time!