You are here:
Home / Microsoft Flight Simulator Xbox review – you can see your house from here 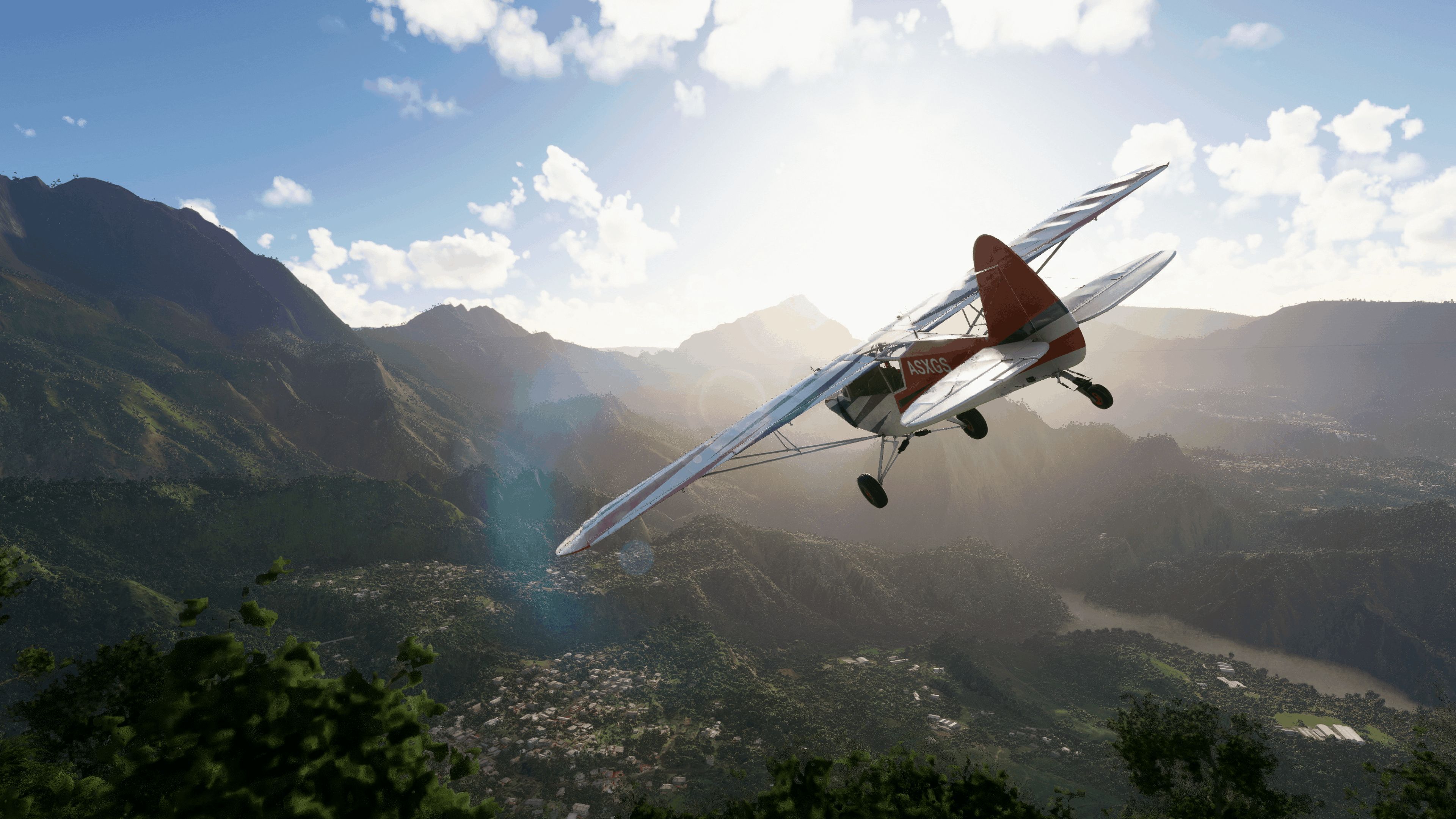 The first true Xbox Series X exclusive shows off the full power of the console in one of the best looking video games ever made.

The phrase non-game is something that arose during the Nintendo DS era and was intended by those that coined it as an entirely derogatory term. Releases like Brain Training and Art Academy clearly weren’t games, and were never portrayed as such, but that doesn’t mean they didn’t achieve the purpose for which they had been created. Microsoft Flight Simulator isn’t really a game either, as while there is intrinsic fun in piloting an aircraft and viewing virtual horizons there’s essentially no gameplay to be found here.

Unlike a car simulator, which at least has the artifice of races and in-game progression, there is no attempt here to add anything that does not involve an exacting simulation of flying a modern aircraft. That doesn’t mean that it isn’t accessible – controlling a plane in flight with all the assists on is extremely easy – or that there aren’t detailed tutorials, but there’s no structure at all and the only challenge is turning off those assists and thereby upping the realism.

Originally released on PC last year, this technically goes against Microsoft’s intention not to release any Xbox Series X/S exclusive games for the first two years of the consoles’ life. Although perhaps they feel the non-game status means they haven’t broken that particular promise. Although the main menu doesn’t make it very obvious what you should do first, if you opt for the Discovery Flights mode you’ll be able to drop yourself into one of several famous worldwide locations mid-flight and immediately get a feel for what the experience is all about.

Flyovers of everywhere from Mount Everest to the pyramids of Giza and skyscrapers of New York City look startlingly realistic, with the freedom to fly anywhere you want without restriction. It’s easy to see why this became so popular last year, when almost nobody was able to fly, and given most people will still be avoiding international travel that extra thrill is still present. Especially as there aren’t many charter flights that try to see if they can fly between the gaps in Tower Bridge.

Once you’ve messed around with the Discovery Flights you’re ready to work through the Flight Training mode – which is very comprehensive but also very compact – and from there to the meat of the experience on the World Map. On Discovery Flights you have no control of where you start, the plane you’re flying, or the time of day or weather, but on the World Map you set up a flight from and to anywhere you like. And while you can tell all this was designed primarily to simulate real flights (you can even choose which parking ramp you start from at an airport) it’s much more fun to pop yourself into the wastes of Antarctica or an aerial safari of Kenya.

And that, in terms of modes, is almost it. There is another section called Activities, that incorporates Discovery Flights and Flight Training but also offers landing challenges and ‘bush trips’, which are long distance tests of your navigation skills in remote locations. It’s not exactly Pilotwings but some of these challenges involve being awarded points, which is the closest anything ever gets to being a traditional video game, but even Brain Training had scores and it used them as a far more essential part of the overall experience.

There are two main ways to enjoy Microsoft Flight Simulator, the first being as a rigid simulation where you try to do everything exactly as a real pilot does, including hours-long international trips in jet airliners. Experienced like this there’s an obvious similarity with Train Simulator and all the other simulations of mundane industrial vehicles that exist, where generally the only people that enjoy them are those that already have an interest in the subject matter.

The other way is using the World Map like Google Maps and just jumping in and either going somewhere you’ve never been or seeing how realistic the recreation is of somewhere you are familiar with. One of our first ports of call was where we work, which is handily very close to a railway line and so relatively easy to locate after a few flyovers. Since it’s not somewhere anyone would recreate by hand, this proves a good way to understand exactly how the astonishing visuals work.

It’s true to say that Microsoft Flight Simulator simulates the entire world, although only famous cities and locations are modelled by the developer, with everything else left up to AI routines to extrapolate from satellite data. This can lead to some very odd-looking buildings and mountains (even the opening flight training area has some very warped-looking textures) but given it’s trying to recreate the whole planet it’s still extremely impressive.

Flying low over an ordinary road you can see the tops of cars, and shadows of trees, flattened onto the satellite images of roads, which isn’t the case somewhere that’s been handcrafted – like San Francisco. The effect is still highly convincing though, especially as there are vehicles driving around on roads and even animals in wilderness areas.

Universal elements like clouds, bodies of water, trees, and weather are just as astonishing for how realistic they look, especially given the impossible scale. There is a price to be paid for this in terms of hard drive space, with a minimum install of 102.14GB and more if you want to add in other hand-crafted cities such as London and Tokyo. The visuals also work best when using the cloud, with clear warnings about what that will do to your data caps should you have them. This also means the simulation occasionally freezes up for a second, while texture and object pop-in is commonplace.

Despite what an incredible feat the visuals are it’s actually fairly easy to poke holes in them, with the frame rate occasionally dropping to 30fps or below when you’re playing around with the exterior camera. The load times are also extremely long, which seems irritating until you realise this is a £60 purchase on a sub-£500 console that recreates, at a surface level at least, the whole of planet Earth.

There were two things we were most interested in seeing, with one being a night landing at Heathrow, which we’ve experienced a number of times in real-life and is always strangely beautiful, with the golden glow of streetlights and buildings giving the impression you’re flying over some magical fantasy land and not the dull mundanity of daylight reality. This is simulated perfectly (and is really hard to land in, if you’re not just there for sightseeing) and almost as mesmerising as the real thing.

The other trip we wanted to simulate was approaching Iceland at sunset, something we’ve done once before for real and was one of the most profoundly beautiful things we’ve ever seen. We almost feel we should be saying that trying to recreate such an experience virtually is a mixture of arrogance and technological perversity but rather than an affront to nature it’s a wonderful celebration of it. We set the time and weather to the right conditions and the view was remarkably similar to real-life, with incredibly realistic lighting through the clouds and across the waves – enough that we actually got a little emotional at seeing it.

Microsoft Flight Simulator is a unique experience, however you use it, but if it was a standard £60 purchase we’d struggle to recommend it to anyone but existing propeller-heads. You can spend a happy weekend of exploration, just as you might spinning the wheel on Google Earth, but after that you’re left with the inescapable realisation that there’s nothing to actually do. You can make your own fun (or your own mods, on PC at least) but our thoughts quickly began to turn to what this technology would be like if it was used in an actual game.

However, that does mean that this is the perfect Game Pass experience. Without Game Pass this would’ve just been a niche release that very few people got to see but as long as you have a Game Pass subscription you can experience it all for yourself – and if you get bored after a few hours that’s absolutely fine. In fact, that’s perfect, because it’s one illustration amongst many of why Game Pass is such a good idea, as it makes it easy to try something you’re not familiar with and you lose nothing if it turns out not to be for you.

The console port is not flawless though, apart from the technical hiccups the interface is an awkward recreation of the PC, where you click the left stick to bring up a cursor you use to select instruments and use the menu. We also wish you could access the World Map while you’re flying, but you’re only given a little 8-bit map – presumably what real pilots have to put up with – and instead you’re encouraged to learn to navigate by using headings, time estimates, and landmarks (there’s a whole section of the training mode dedicated to such things).

Compatibility with flightsticks is also unexpectedly flaky. Thrustmaster sent us a T.Flight Full Kit X (basically a joystick, throttle, and pedals) to try out at the same and while it was detected and acknowledged the implementation, especially in terms of menus, it was so inconsistent we almost gave up. We’ll review the T.Flight separately, as it works great with Star Wars: Squadrons and we wanted to make sure this review used only a standard controller – which is all you really need.

It’s also important to note that you don’t need any prior interest or knowledge of aircraft to enjoy yourself. That enjoyment may only last for a few days, but as new DLC is released this is likely to be something you’ll keep coming back to on Game Pass, if only to show off to other people what the current pinnacle in console graphics looks like.