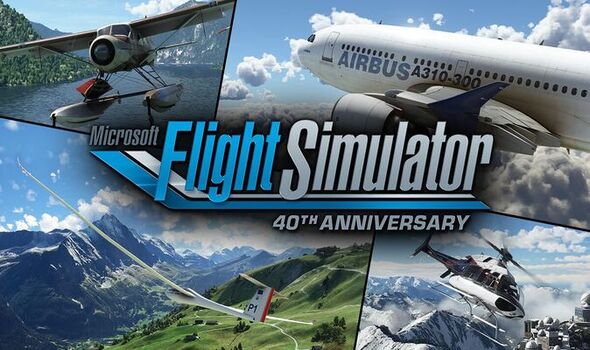 Fans of Microsoft Flight Simulator are counting down to the release of the 40th Anniversary update. MSFS 40th Anniversary Edition has a November 11 release date and a 4pm GMT UK launch time. US players will be able to jump in at 8am PT, while users in Japan will have to wait until 1am JST on November 12. The huge Flight Sim update will be available as a free download for existing players, or as a standalone package for newbies.

Likewise, anybody with an active Game Pass subscription can access the entire package as part of their membership.

Perfect for long-time fans and newcomers alike, the new update brings back fan-favourite lanes from previous games, as well as brand new vehicles.

This includes an authentic recreation of the Airbus A310, as well as helicopters, gliders, and additional airports. You’ll even have a selection of new missions to complete.

Microsoft explains more: “The 40th Anniversary Edition, a completely free offering for those who already own Microsoft Flight Simulator or play it via Xbox Game Pass, is a comprehensive celebration of the franchise with both a tribute to our past as well as an introduction to new and highly anticipated aircraft types.

It’s the final countdown! The launch of the highly-anticipated 40th Anniversary Edition is only one week away, and we couldn’t be more excited. Helicopters, gliders, a new study-level Airbus A310, several fan-favourite planes from previous editions of MSFS, classic airports, missions, and more are all coming as part of this free update on November 11. In conjunction with the 40th Anniversary Edition, we will also be releasing Sim Update 11 at the same time, which includes dozens of bug fixes and other improvements to the base sim.

Needless to say, the MSFS 40th Anniversary Edition launches alongside a new patch, complete with bug fixes and gameplay tweaks.

Express Online will have a full list of Microsoft Flight Simulator patch notes later this week. In the meantime, a selection of new items can be seen below.