The metaverse isn’t turning out to be as successful as some investors might have first thought. A new report says that games built around NFTs, cryptocurrency, and the blockchain are having difficulty retaining players.

The report comes courtesy of Coin Desk (via VGC), which notes several NFT-based games are both losing players and their tokens are losing value. ”Tokens for the three major metaverse protocols, Decentraland's MANA, Axie Infinity's AXS, and The Sandbox's SAND are all down year to date, and significantly underperforming bitcoin,” reads the report.

As you can see from the chart below, Axie Infinity, Decentraland, and The Sandbox’s NFTs have all lost value in 2022 compared to 2021. April has been particularly tough with all three taking nose dives, although in Axie Infinity’s case, that could be due to the recent security breach that saw many of its NFT holders lose significant amounts of cryptocurrency. 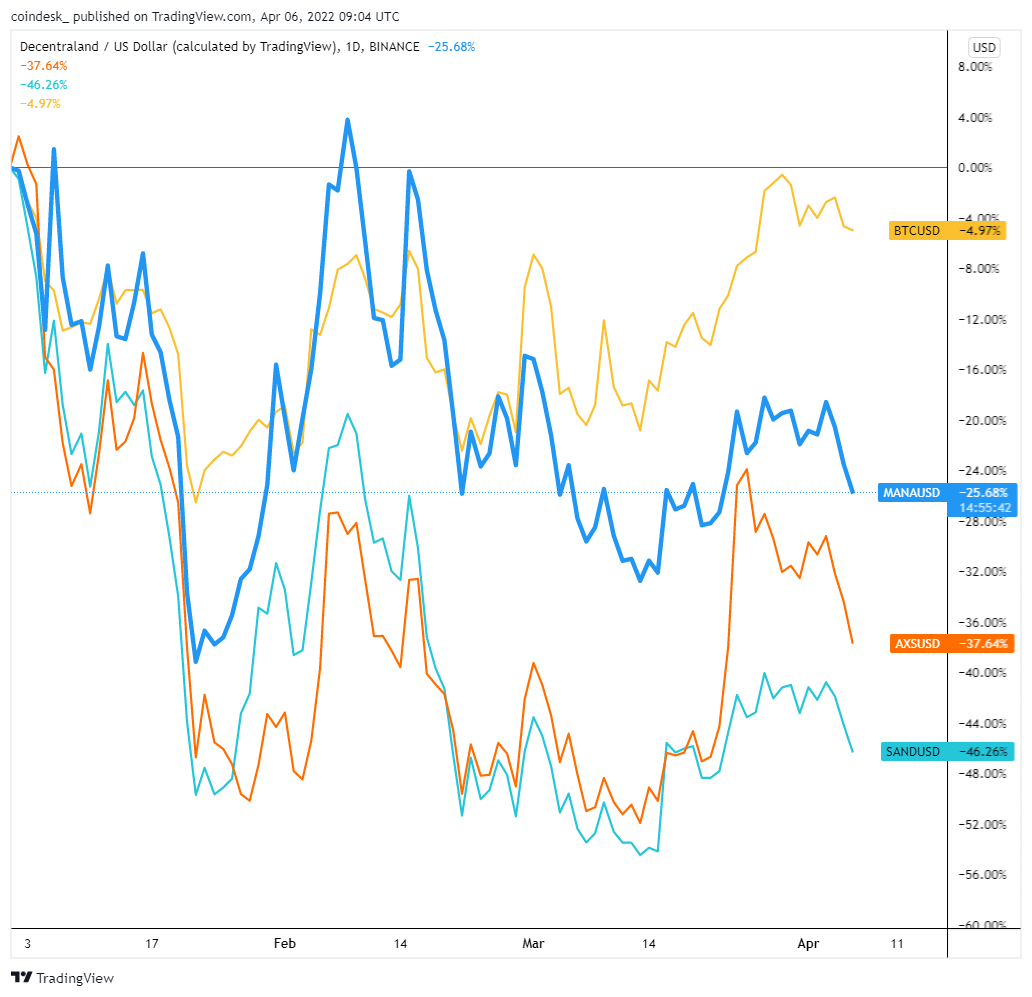 It’s not just NFT value that’s being lost, but players too Daily active user counts have dropped for all three games, with The Sandbox losing 29% of its active users over the past 30 days (down to 1,180 players), and Decentraland losing 15% (down to 978). Axie Infinity remains the most successful of the three with 107,240 concurrent players, but that’s still a 30% drop in the number of people playing at the beginning of March.

Speaking to market observers, Coin Desk postulates that the amount invested in the metaverse by various companies doesn’t seem to be generating value, either in NFTs or in player counts. There could be various reasons for this, but as Web 3 analyst DeFi Vader wrote, chief among them is a lack of “organic engagement that retains players in game.” Another issue is the nature of NFTs often creates a pay-to-win environment, which most major video game publishers try to avoid.

News of a failing metaverse comes not a month after a report that revealed NFT trading volume has dropped 80% since its peak last November, resulting in NFTs losing almost half their value. Public backlash against NFTs is believed to be the cause of crashing NFT sales, but weekly reports of hacks and scams probably aren’t helping either.