You are here:
Home / Metal: Hellsinger – How To Defeat The Red Judge Aspect In Incaustis

Metal: Hellsinger – How To Defeat The Red Judge Aspect In Incaustis

The Red Judge Aspect In Incaustis is the fourth boss you have to defeat in Metal: Hellsinger. This enemy won’t be alone as it will fight you using a small tower — apart from the usual regular enemies spawning, of course. Keeping an eye on this structure will be key to your success.

To fight this aspect, you’ll have to go through Incaustis, the hell that comes after Yhelm. Here you’ll meet new types of enemies, and also a fantastic weapon that is one of the best in the game. Let’s check all of this in detail below. 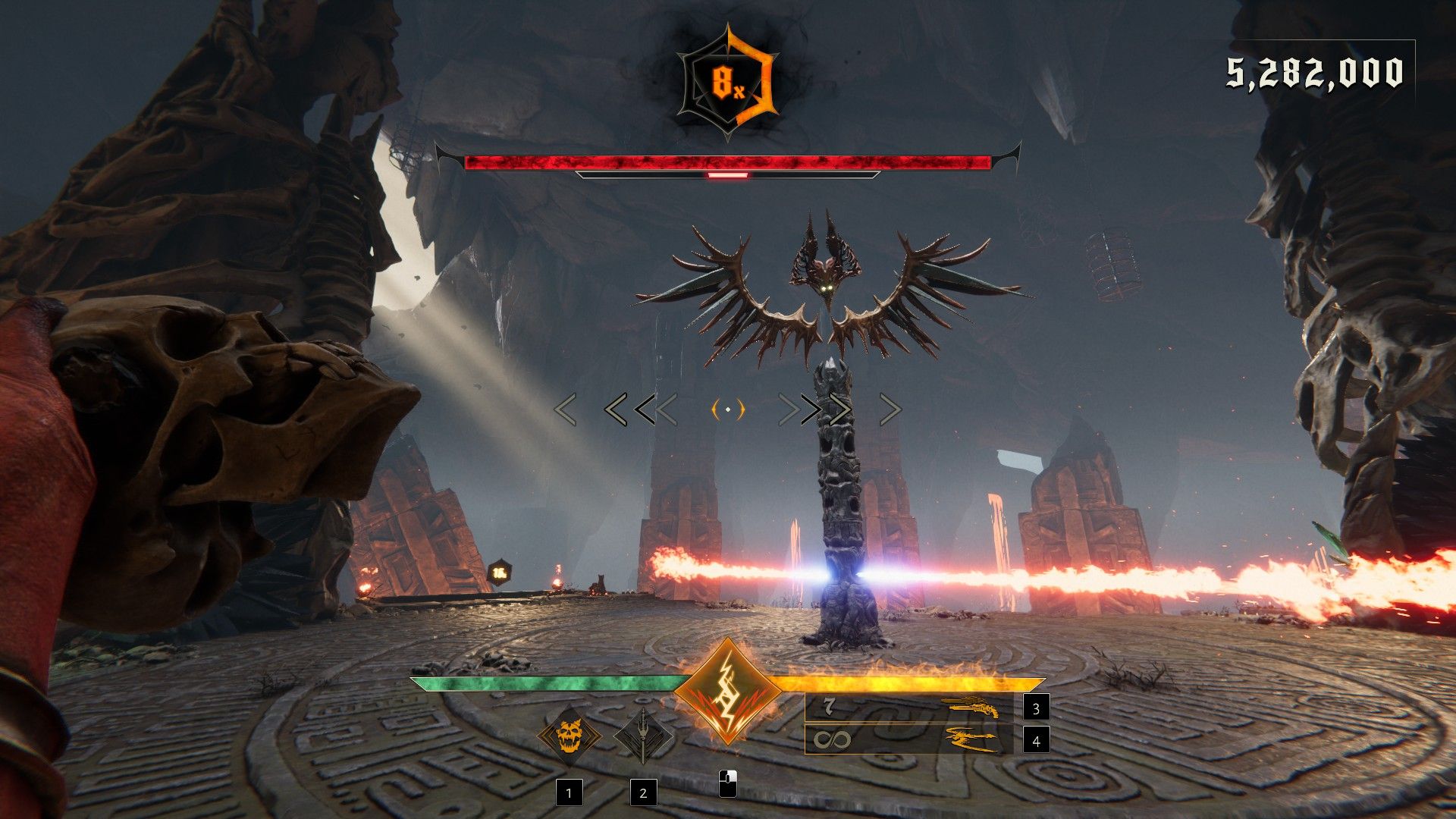 The arena in which you face this Red Judge Aspect is a big circle with some towers made of bones on the corners, and also small rectangular platforms on some sides. On one of these platforms will be a 16x Fury boost, which will help you when aren’t feeling the music too much. Also, the aforementioned towers have green crystals for your health.

There’ll be a stone tower in the center of the stage, and you won’t be able to damage it. This will be a changing threat because it will throw large lines of fire at different moments. At first, it’ll be only two, but the tower will produce an extra one each time the boss recovers from a stun, with a maximum of four fire lines at the same time. 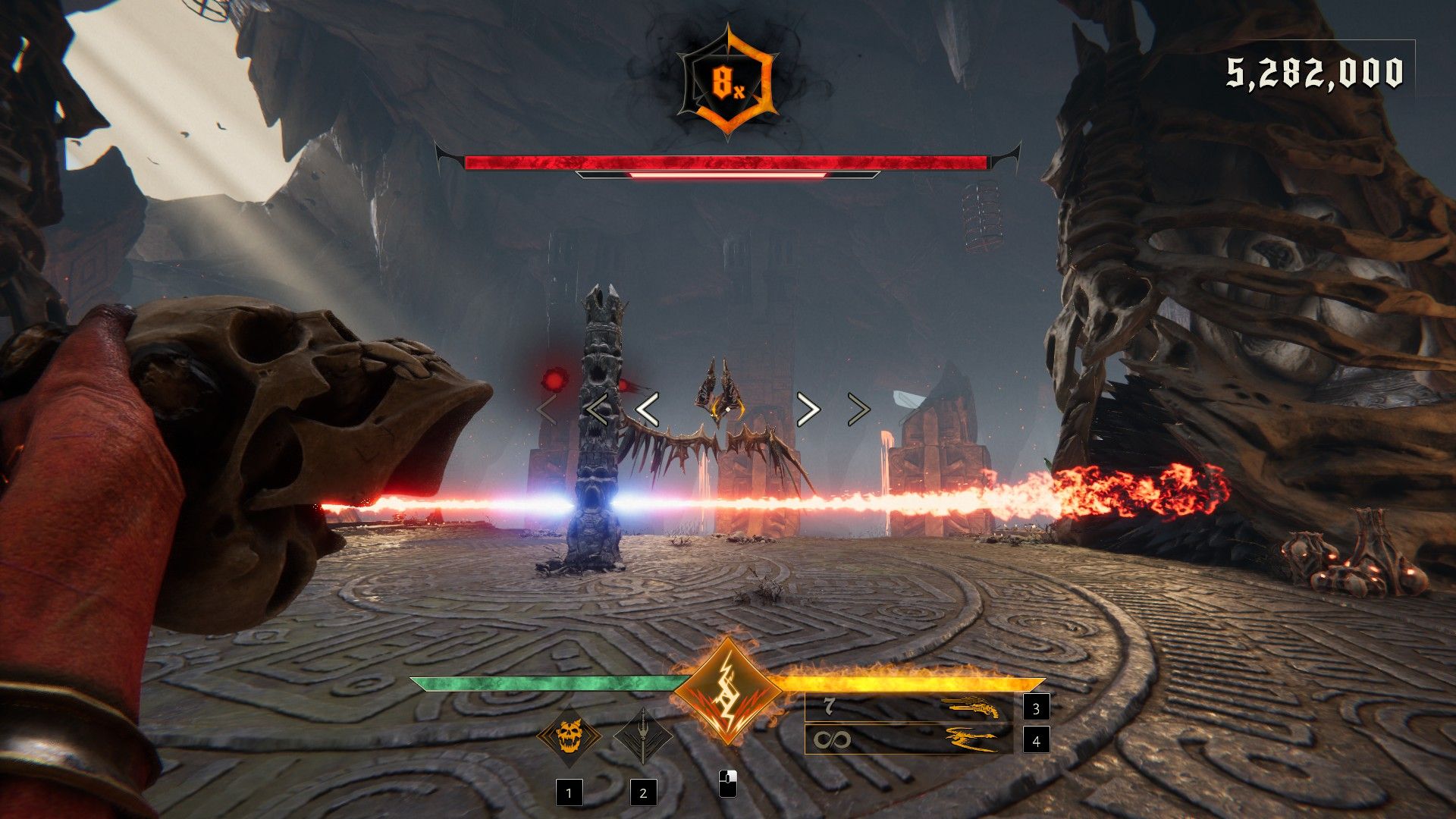 Fortunately, these lines will be stationary or move pretty slowly, so you won’t need to move around all the time just for them. On the other hand, the boss will throw you the usual red projectiles, and it will spawn enemies like Marionnets, Behemoths, and more.

The one creature that you should pay attention to is the one that you met for the first time in this hell, the Hierophant. This is the only type of enemy that can summon other creatures similar to themselves, and also a black figure that will move on the ground.

How To Defeat The Boss In Incaustis 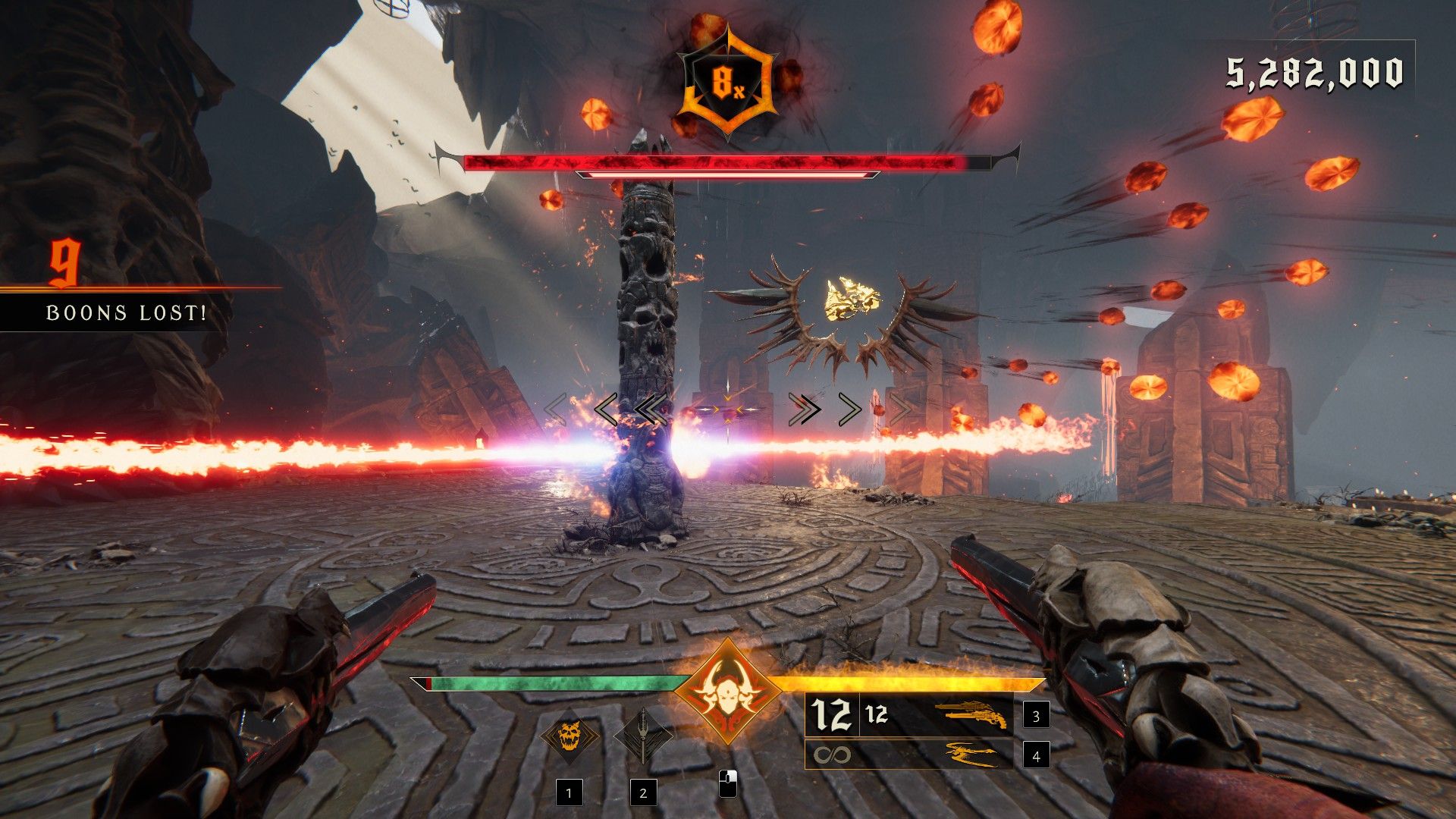 As the boss will be constantly flying and moving away from you, the best weapon for this battle is The Hounds. Its range and number of bullets will give you an advantage when compared to other weapons, even if the damage isn’t the highest.

The idea of this fight is, shockingly, to shoot the boss while keeping an eye on the tower next to you. The good news is that the tower is more cool looking than anything — due to the fire moving very slowly, you’ll be fine by just looking at it one time, checking where the fire is coming from, and just using the rest of the space to move freely and attack the aspect.

This will get more complex as you progress through the fight, because three or four lines will restrict your movement a bit more, but it won’t be the fearsome challenge it could have been. Just keep in mind that one or two lines can be at different heights, preventing you from jumping in that direction. 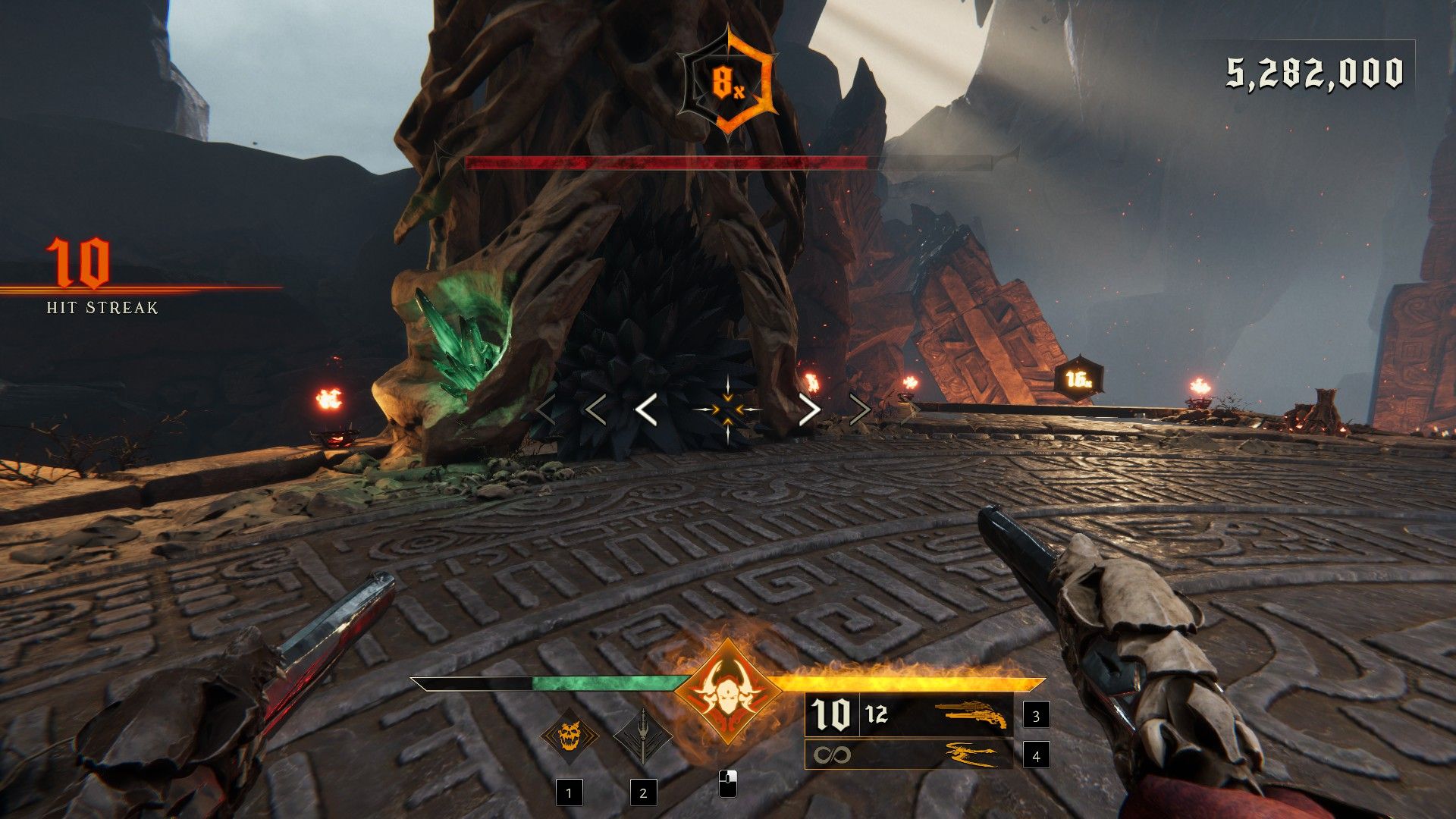 If you get too damaged, try to resist until being at the lowest health possible and then break a green crystal around. It will refill all your bar at once. Performing a Slaughter on a simple Marionette is another possibility, although it can be more complicated with all the stuff on screen.

Another thing that might disturb your gentle headbanging is the Hierophant that will spawn eventually. When that happens, you should forget the boss, the rest of the enemies, and even the tower of fire. Destroy the Hierophant as soon as possible because it will start filling the screen with extra annoying monsters that you don’t need. 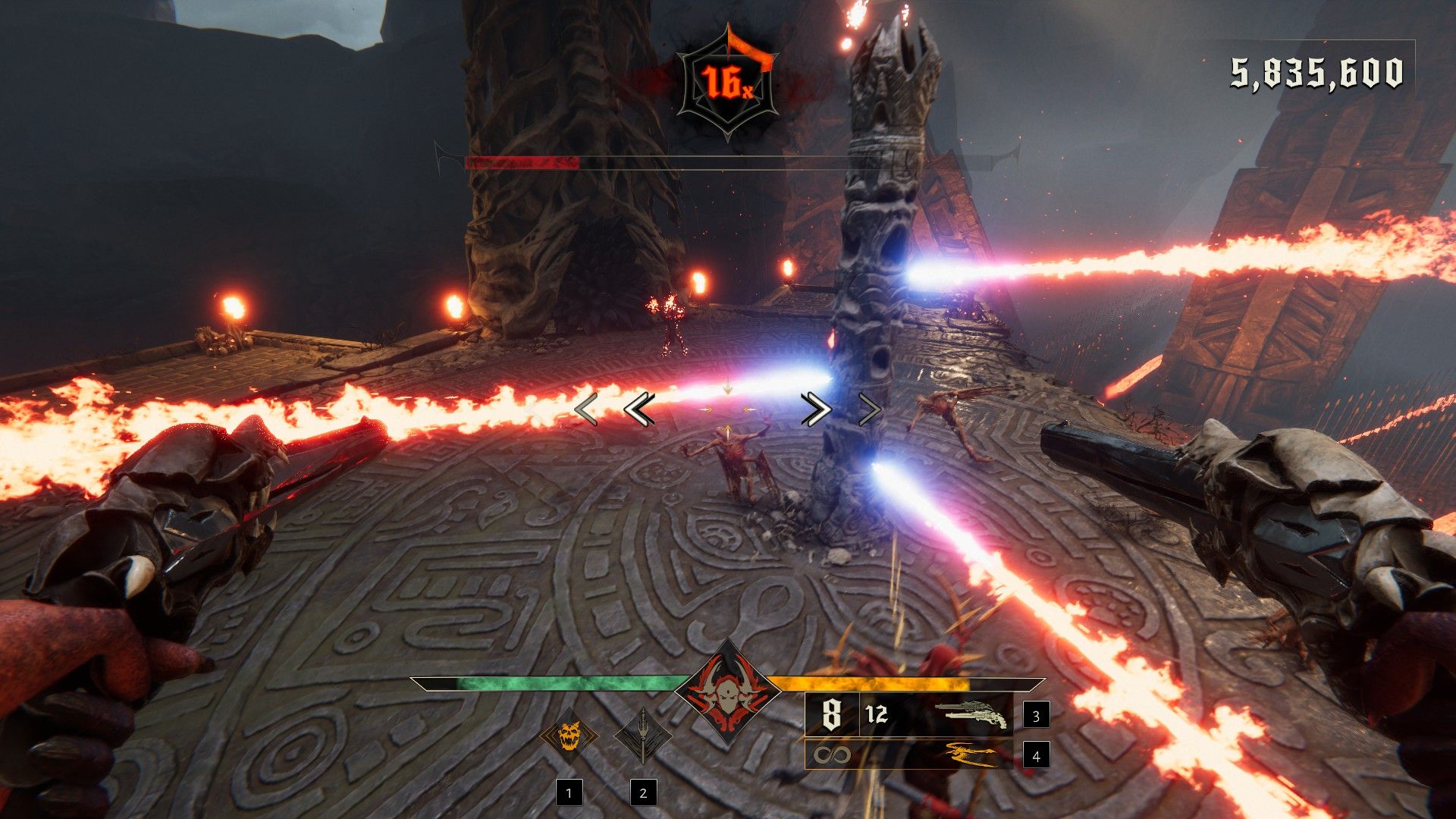 A good option against this enemy (and the rest of the creatures) is to have your Hellcrow’s Ultimate charged. This is one of the most overpowered Ultimates in the game because it creates a barrier around you while also dealing high damage to everything it touches.

Once that’s done, just keep hitting the main boss, using your double jumps and dashes to avoid the lines of fire and you should be fine. This aspect isn’t as aggressive as the others, letting you focus on the other dangers. 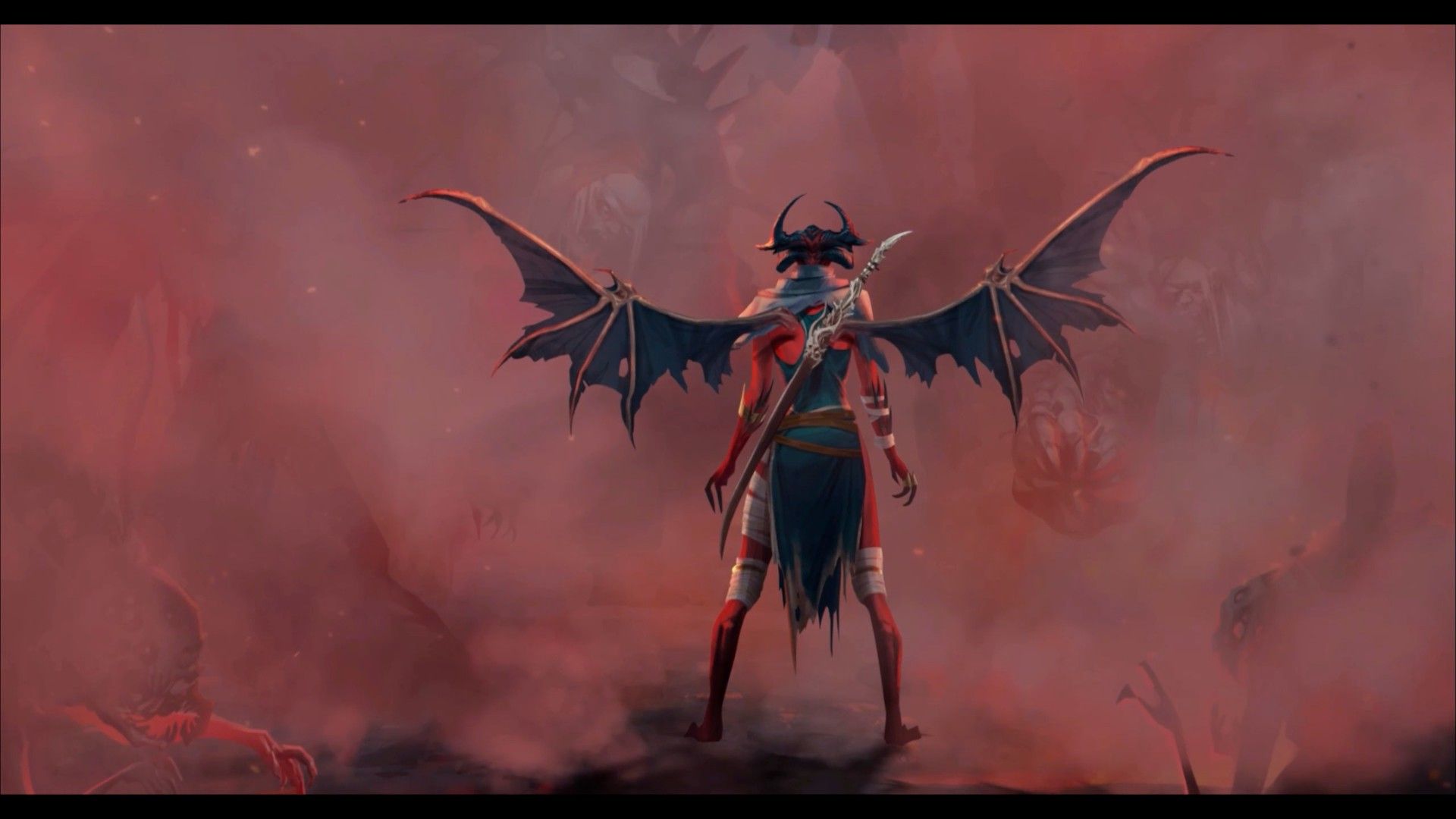 When you defeat this boss, you’ll be rewarded a new Hit Streak Boon, the Deadlier Dash Boon. This one increases the damage of the dash you can do, but only when you’re in Hit Streak 22 (or above).

Also, a new selection of Torments will be available: Slaughter Mastery: I, Giantslayer: II, and Relic Thief: III.

The last of these Torments will upgrade a Sigil to its ultimate level (level three) — if you complete it successfully, of course.