When players think of Mass Effect combat, their first thought will usually be of enemies being thrown around with glowing blue powers. Mass Effect’s Biotic abilities are a feature that makes the series’ gameplay stand apart, adding uniqueness and variety to what could have been a generic cover shooter.

With Mass Effect: Legendary Edition’s inclusion of all the DLC content, all the added Biotic powers that this content introduced can now be used by all players. However, while some of the fancy DLC biotic powers may be exciting and fresh, sometimes the classic powers are the ones that are the better choice to invest in. 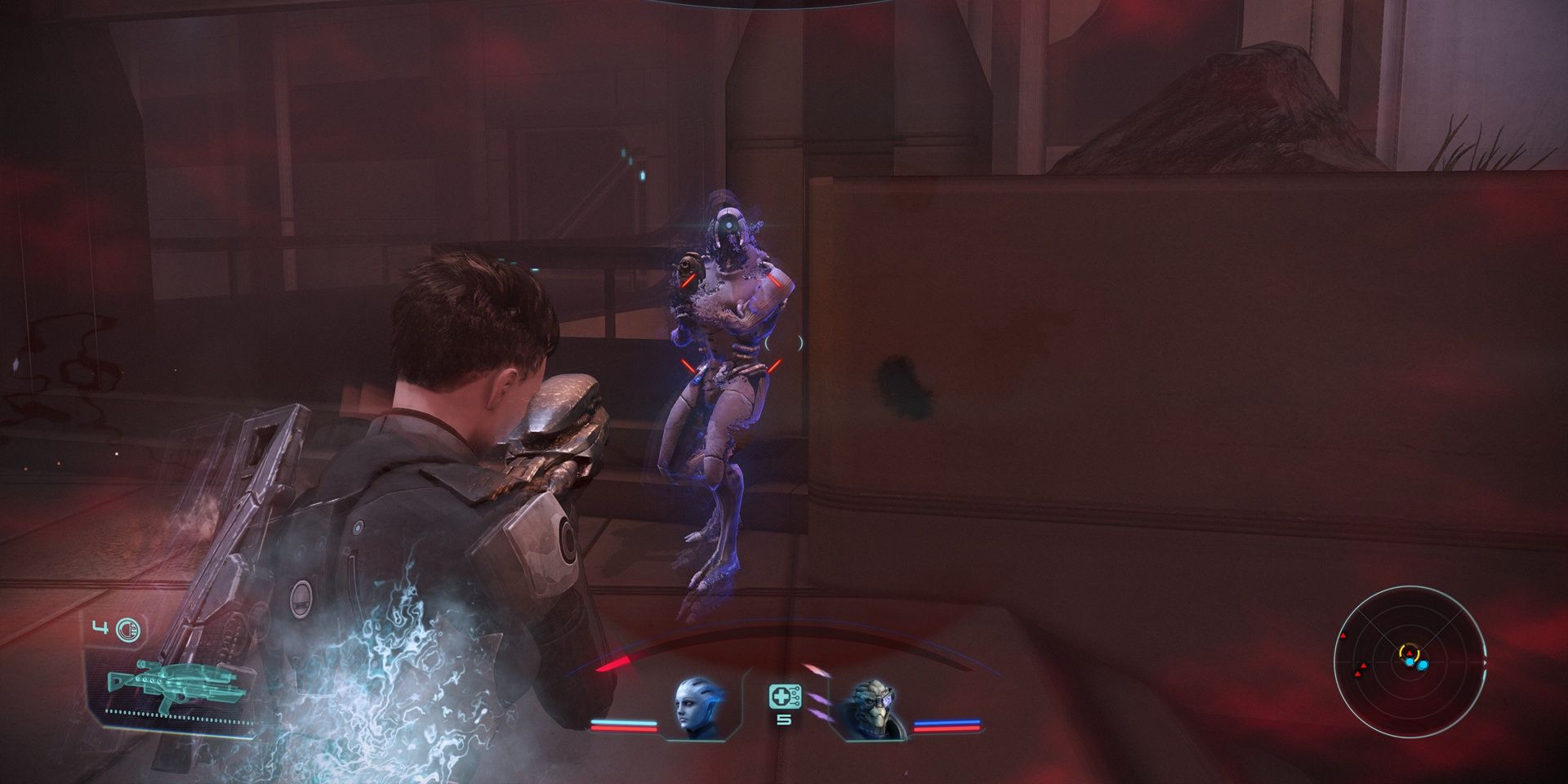 Stasis is one of the most unique Biotic powers seen throughout the trilogy. When used, it essentially freezes the target in a mass effect field, leaving them stuck for a short amount of time.

While on paper this power may sound like a clear winner, one major shortcoming sees it bumped down in terms of its effectiveness. That downfall is that when the enemies are stuck in the field they also become impervious to damage. So, while they may not be able to attack you, you are also unable to deal damage to them.

Mass Effect does provide a way to allow Stasis to be used and then deal damage to the target but to do so you must process the Bastion specialization class and have Stasis Specialization unlocked. However, the effort to do all this isn’t worth it given the extensive range of other Biotic abilities on offer. 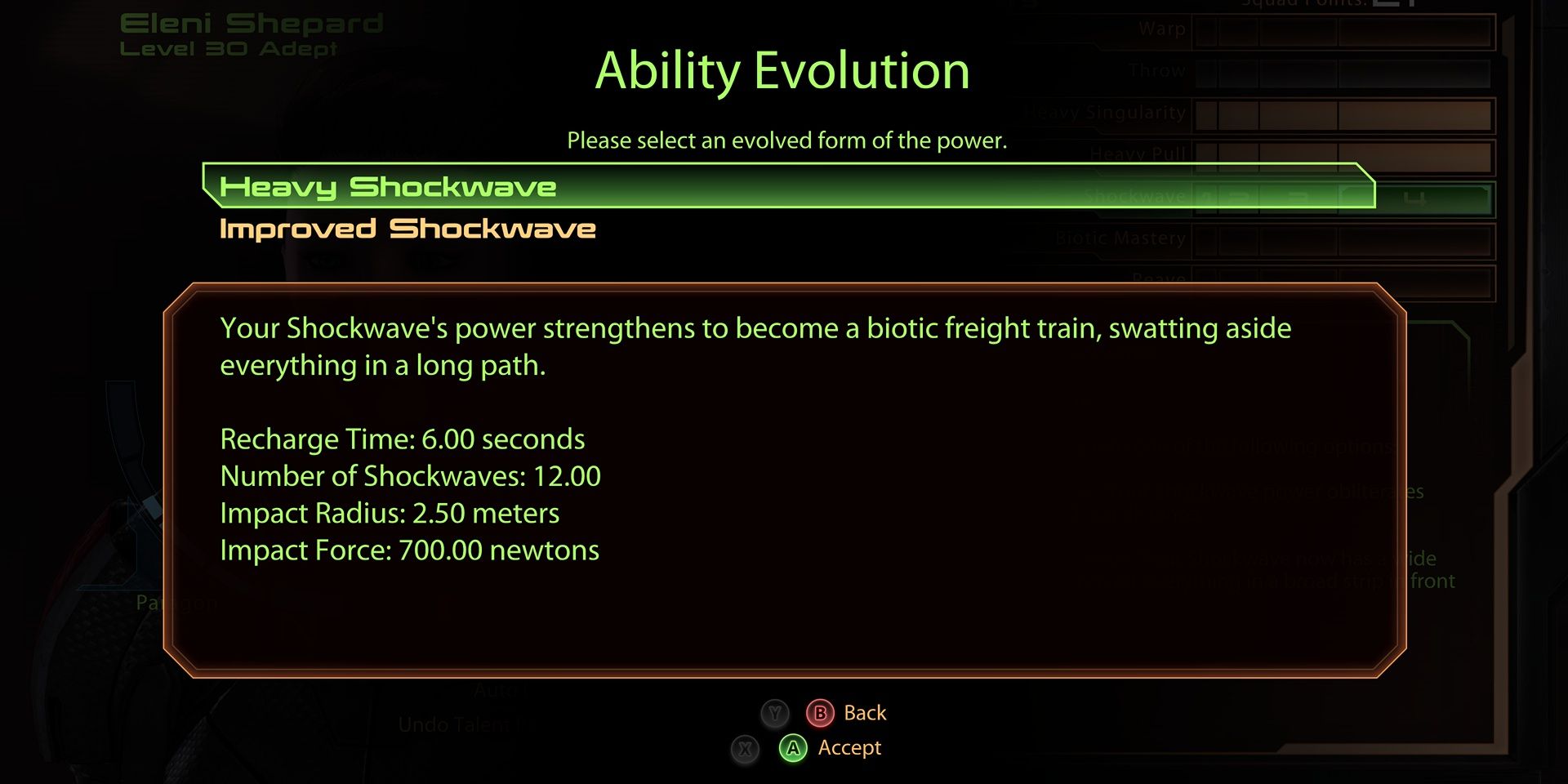 Shockwave is another unique Biotic power that can very effective when used in the right situations. It emits a row of Biotic forces that knock over and disrupt any targets in the way. First introduced in the second game and then kept for the third title, Shockwave can be used by Squadmate Jack or is alternatively an ability for the Adept and Vanguard classes.

While it lacks power in its early ranks, investing the talent points in Shockwave can transform this power into a bit of a beast. In Mass Effect 3, upgrading Shockwave to the sixth and final rank and choosing the lifting shockwave option means any enemies hit will be suspended in the air. This can be an effective way to pick off targets and force them out of cover. 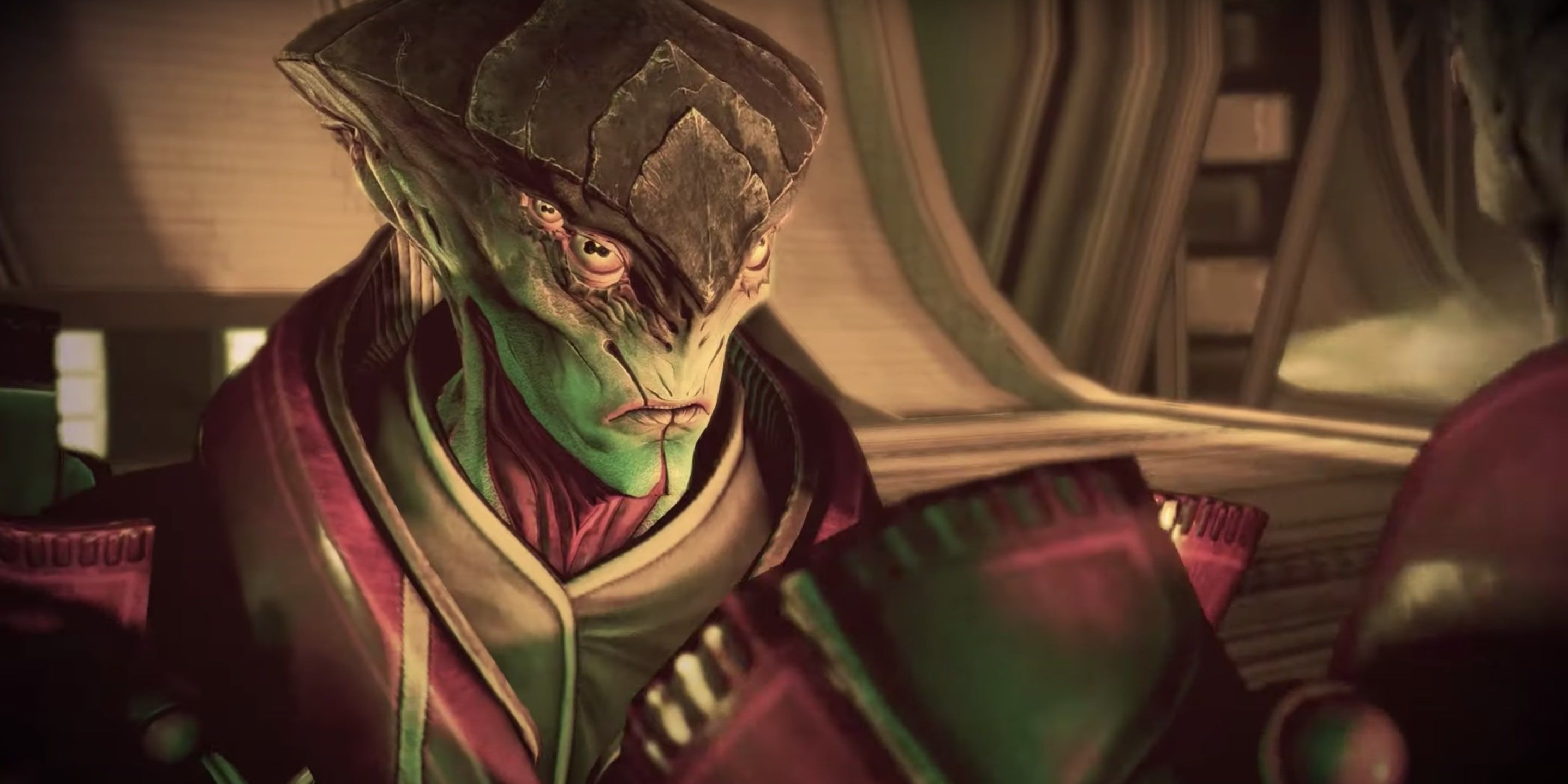 When Mass Effect 3 gave players the chance to uncover an actual living Prothean, the hope was that with this inclusion would come some brand-new abilities. Dark Channel is a Biotic power only available to use by Javik that can later be used as a bonus power by Commander Shepard. 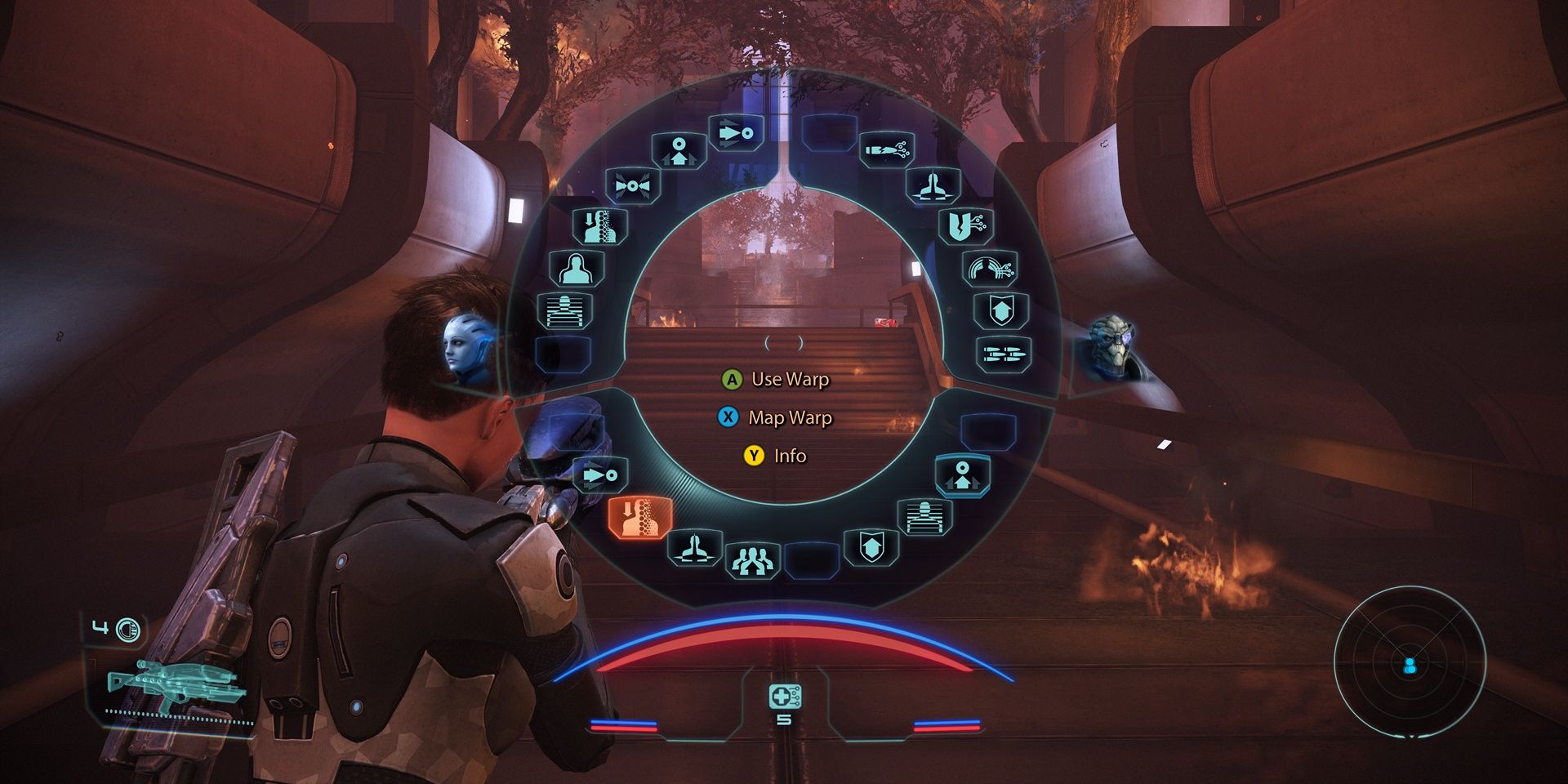 Warp is a Biotic ability that proves that sometimes simple is more effective. It also happens to be one of the most readily available Biotic powers across the Trilogy, with most Biotic Squadmates having access to use the power across all three games.

Simply put, Warp is a power that tears enemies apart. It can destroy an enemy’s barrier and armor in one go and will even prevent any healing or regeneration of organic targets. On higher difficulties when ammo is so valuable, Warp is one of the best ways to destroy the outer health of a target before then using weapons to finish them off. In Mass Effect 3, Warp is also one of the best powers to use for power combos and can be combined with Biotic, tech, and combat powers to deal devastating damage. 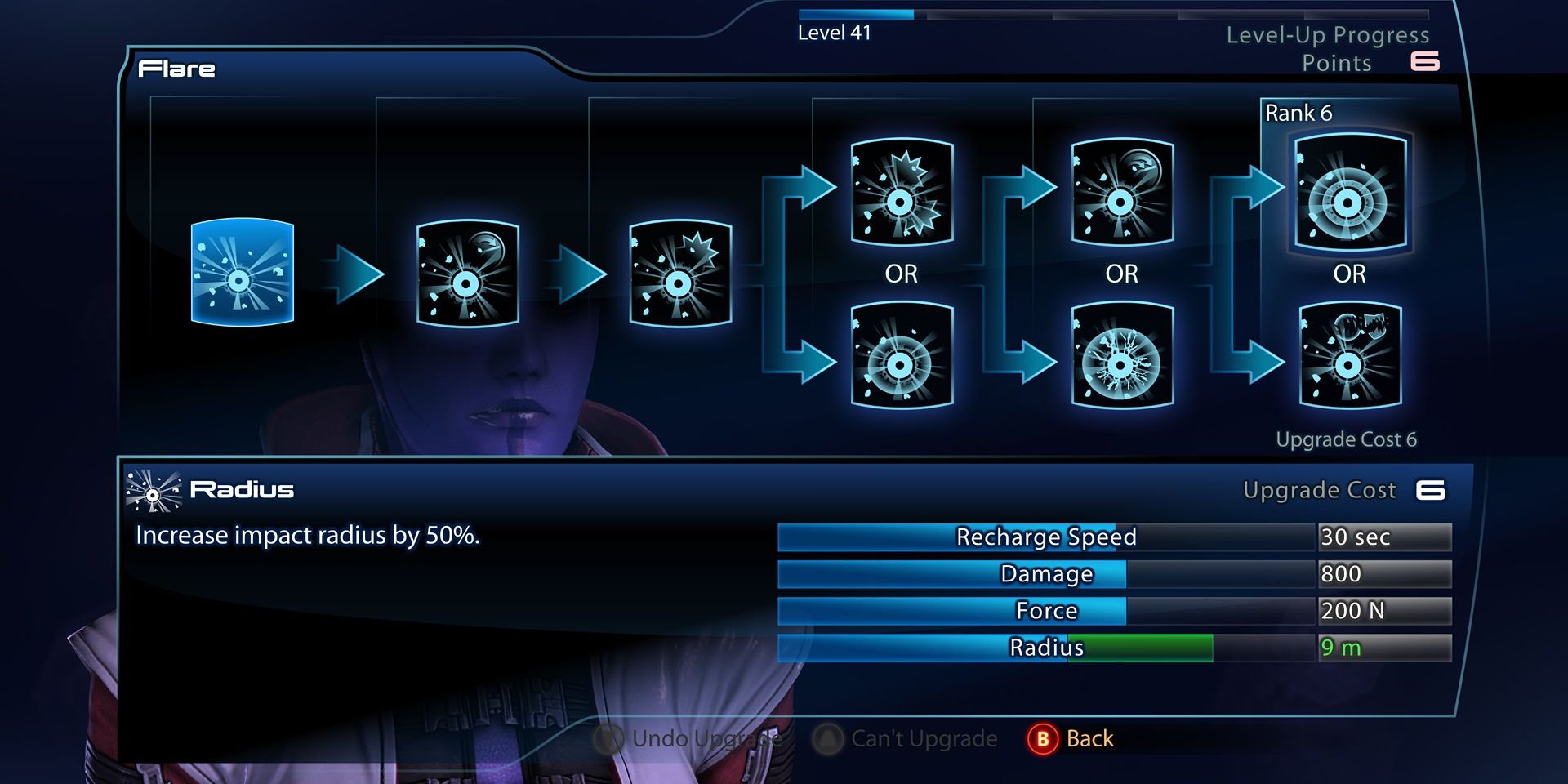 One of the biggest and most dramatic Biotic abilities, Flare unleashes a giant shot of Biotic energy at enemies that can cause massive damage if it lands. Originally only available via paid DLC, Mass Effect: Legendary Edition makes this content available for all players. One must simply help Aria T’Loak take back Omega in Mass Effect 3 and then the ability will be available to Commander Shepard.

Fully upgraded, Flare is the most powerful Biotic ability throughout the Trilogy. While the only real way to use it is via unlocking it as a bonus power in the third game, having it in your arsenal can get you out of many a sticky situation. 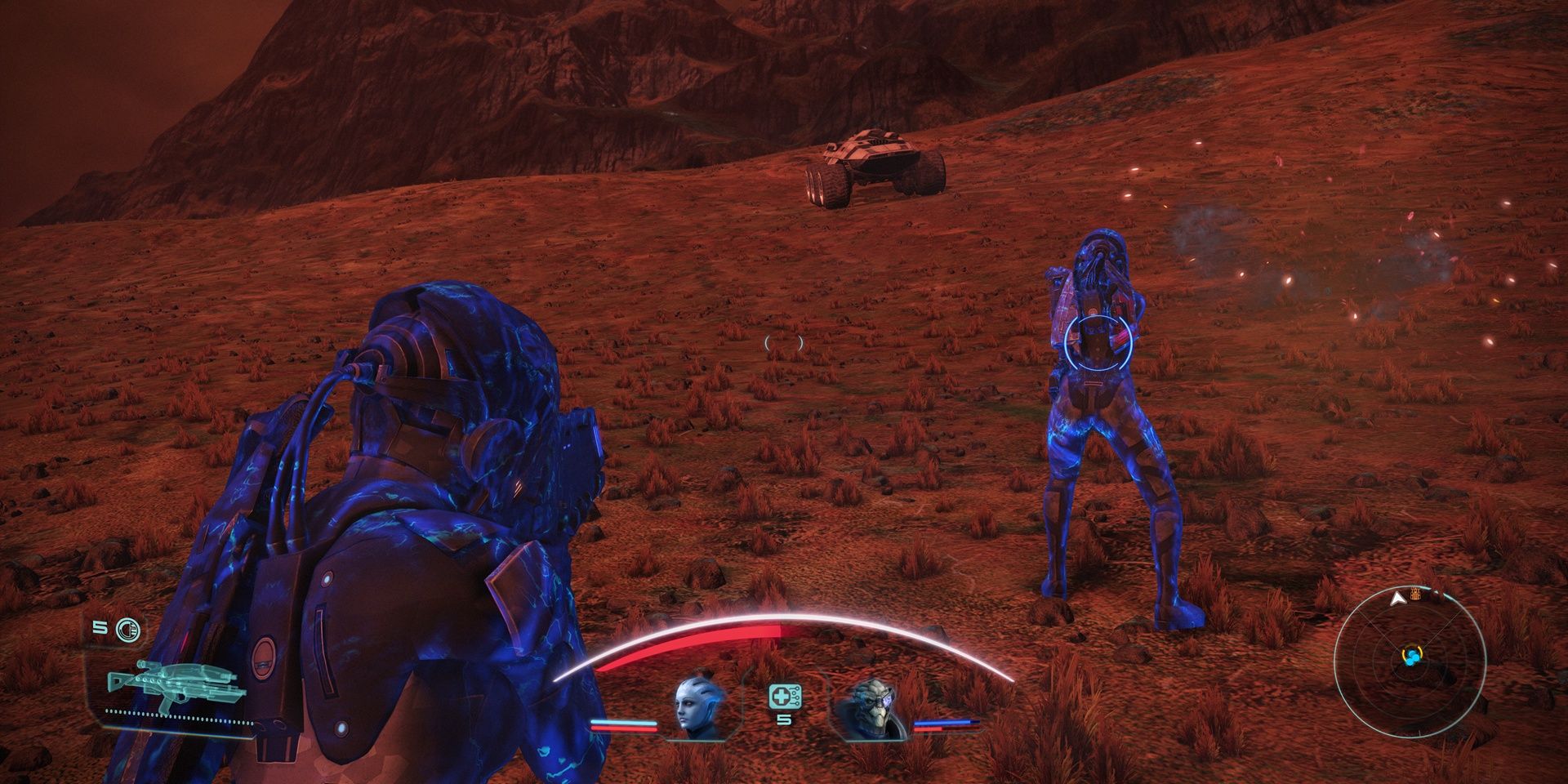 A classic Mass Effect Biotic power, Barrier is a power that uses mass effect fields to provide the character with added shield boost and protection. It is a power mostly seen in Mass Effect 1 and 3 however it can be used and unlocked in Mass Effect 2 after completing Jacob Taylors’ Loyalty Mission.

In particular, Mass Effect highlights the importance of added shield strength, especially for Squadmates. With the likes of Kaidan Alenko, Urdnot, Wrex, and Laira T’Soni all having Barrier at their disposal, upgrading this power can turn them into bullet absorbing machines. However, Barrier is also a handy ability to have at your disposal and can offer added protection when coming up against some of the hardest combat encounters. 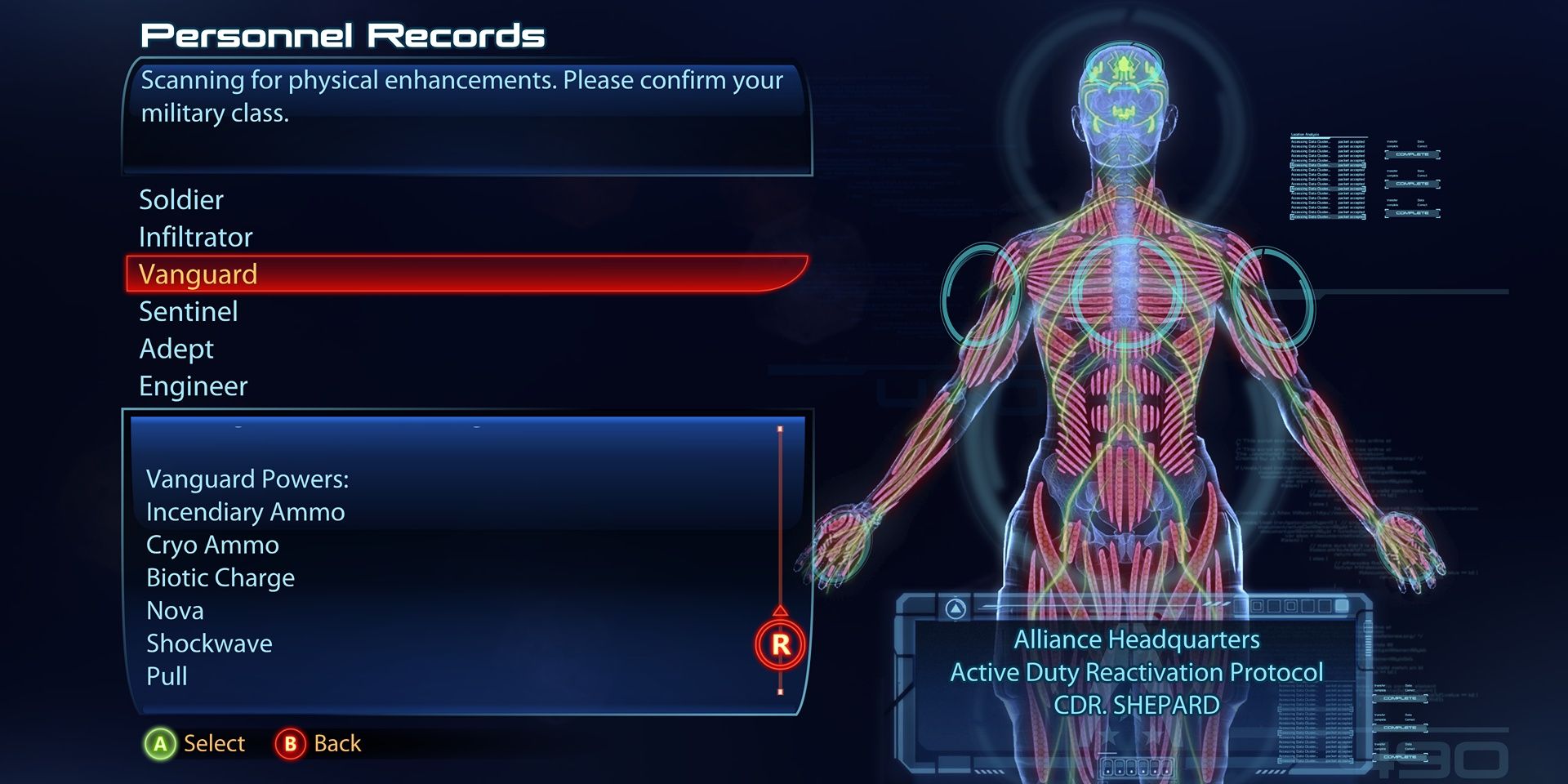 Introduced in Mass Effect 2, Charge is an aggressive power that essentially uses Biotics to transport the character across the map and collide straight into the intended target. For unshielded enemies, this attack will send them flying backward but for the bigger enemies, it can be a great way to do some damage before finishing them off with a shotgun.

The only way to access this power is to choose to play as the Vanguard Class in Mass Effect 2 and 3. However, given that many argue Vanguard is the best class in the Legendary Edition, Charge is a great power to pour talent points into when using this class. Above all though, Charge changes up the cover shooter dynamics of the game and can create a really fun and faced paced combat dynamic that isn’t usually seen in a Mass Effect game. 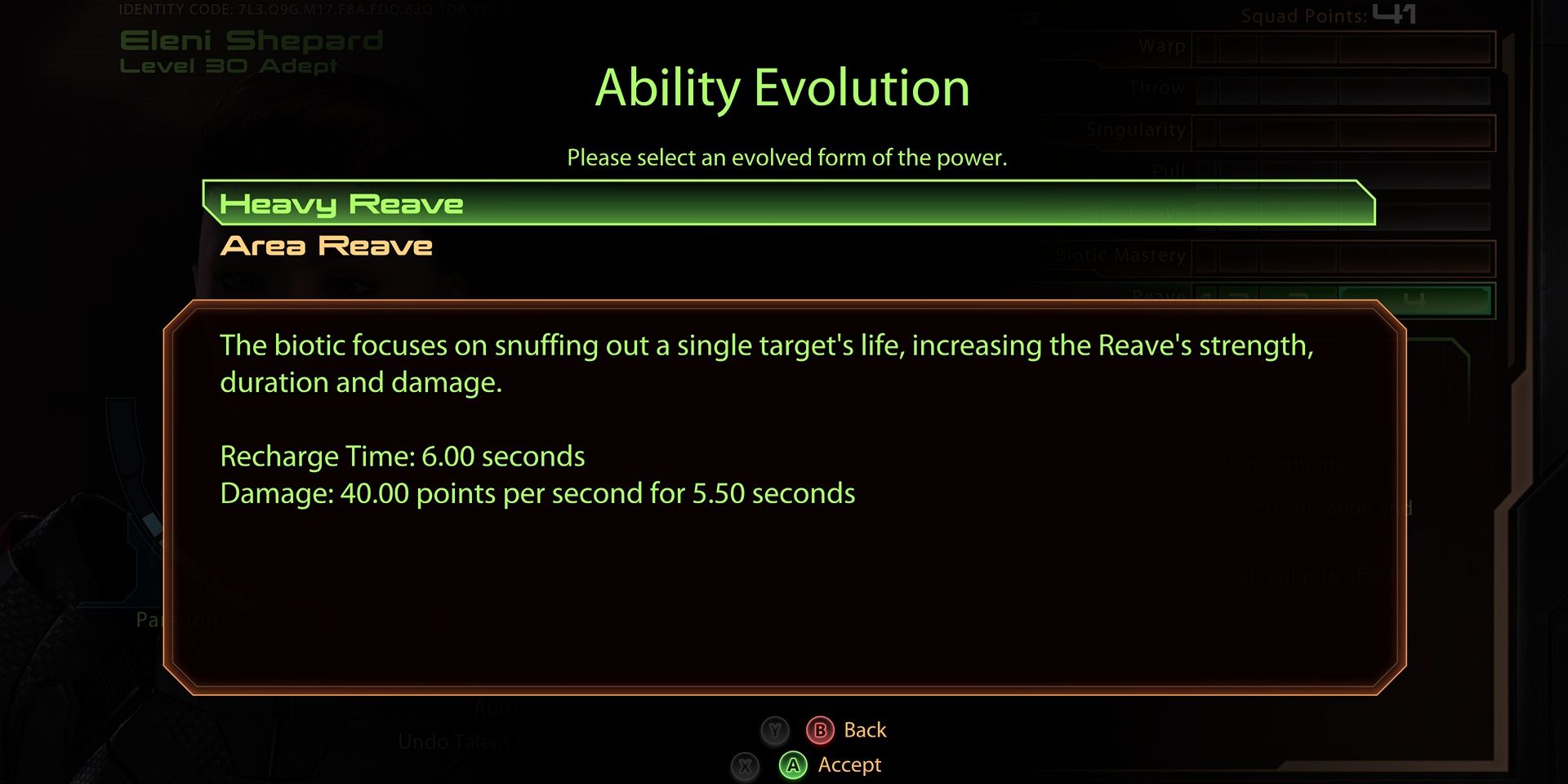 Reave is a biotic power in Mass Effect 2 and 3 and one of the most underrated Biotic powers in the Legendary Edition. When used, Reave fires a mass effect field that targets an enemy's nervous or synthetic system. This power then drains their health and prevents them from healing but also can re-heal Shepard when you use the power yourself. As well as this it also can be used as a powerful detonator in the third game for power combos.

This power can be accessed in Mass Effect 2 through advanced training after completing Samara’s Loyalty Mission. Similarly, in Mass Effect 3, it can be accessible for Shepard as a Bonus power, however, Kaidan Alenko, Aria T’Loak, and Miranda Lawson can all use this power throughout the game. 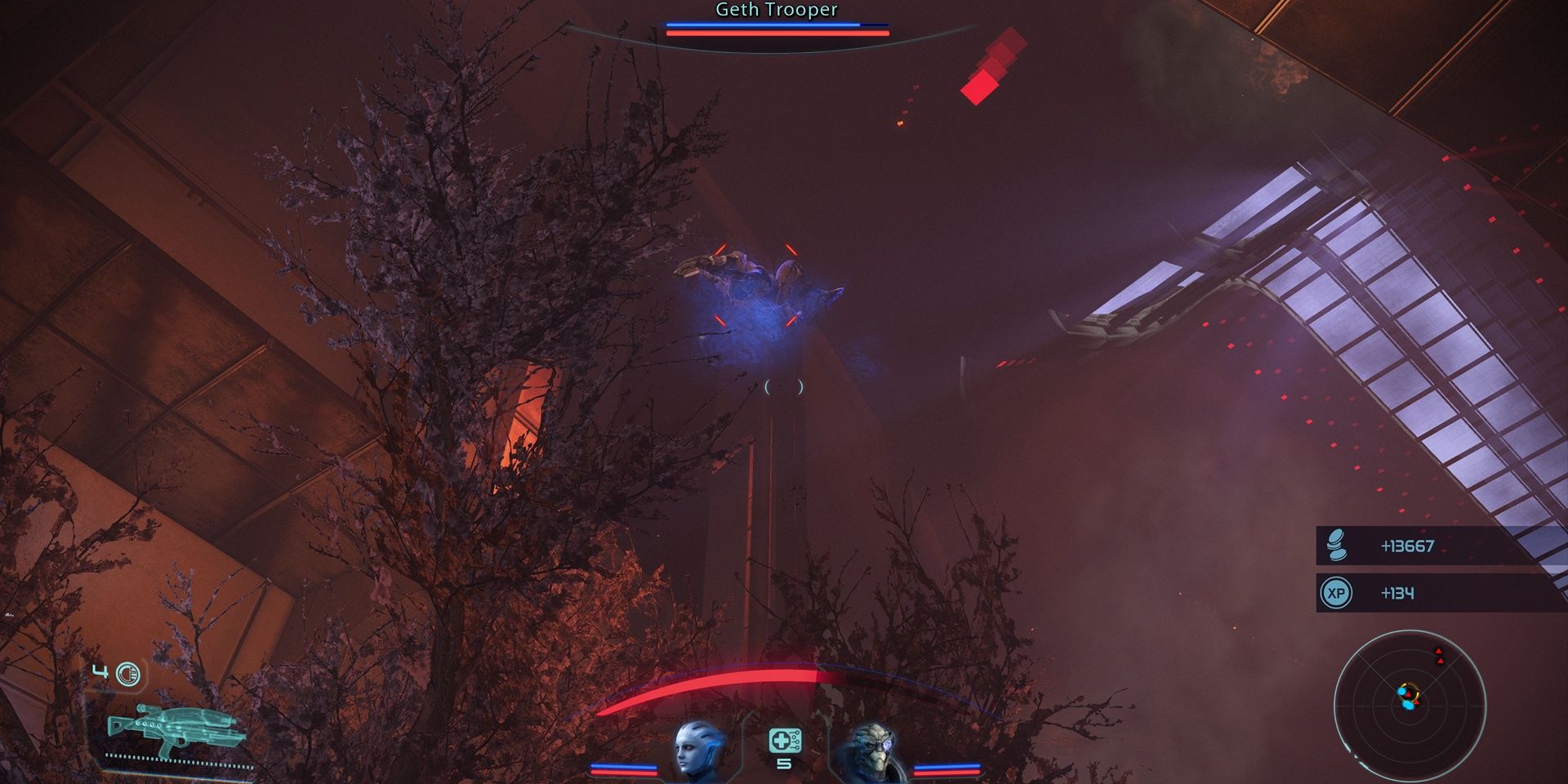 Only appearing in the first Mass Effect, the biotic power Lift leaves one giant impression. As the name alludes to, activating Lift shoots enemies into the air with a Biotic current, leaving them vulnerable to be attacked. Lift can be used by all Squadmates with biotic capabilities in the first game.

When upgraded, Lift becomes easily the most overpowered ability in the whole first game. It can fly enemies so far up in the air they will disappear and die. And for charging enemies like the Korgan or a Geth Destroyer, using Lift will see them go flying right above your head and into the abyss. It can even lift obstacles and cover off the ground, exposing enemies who may have been concealed otherwise. It’s a shame it was never featured in the final two games but in Mass Effect, it serves as a powerhouse ability. Additionally, Lift can be a great source of amusement due to the chaotic nature of the power and can create some very funny moments. 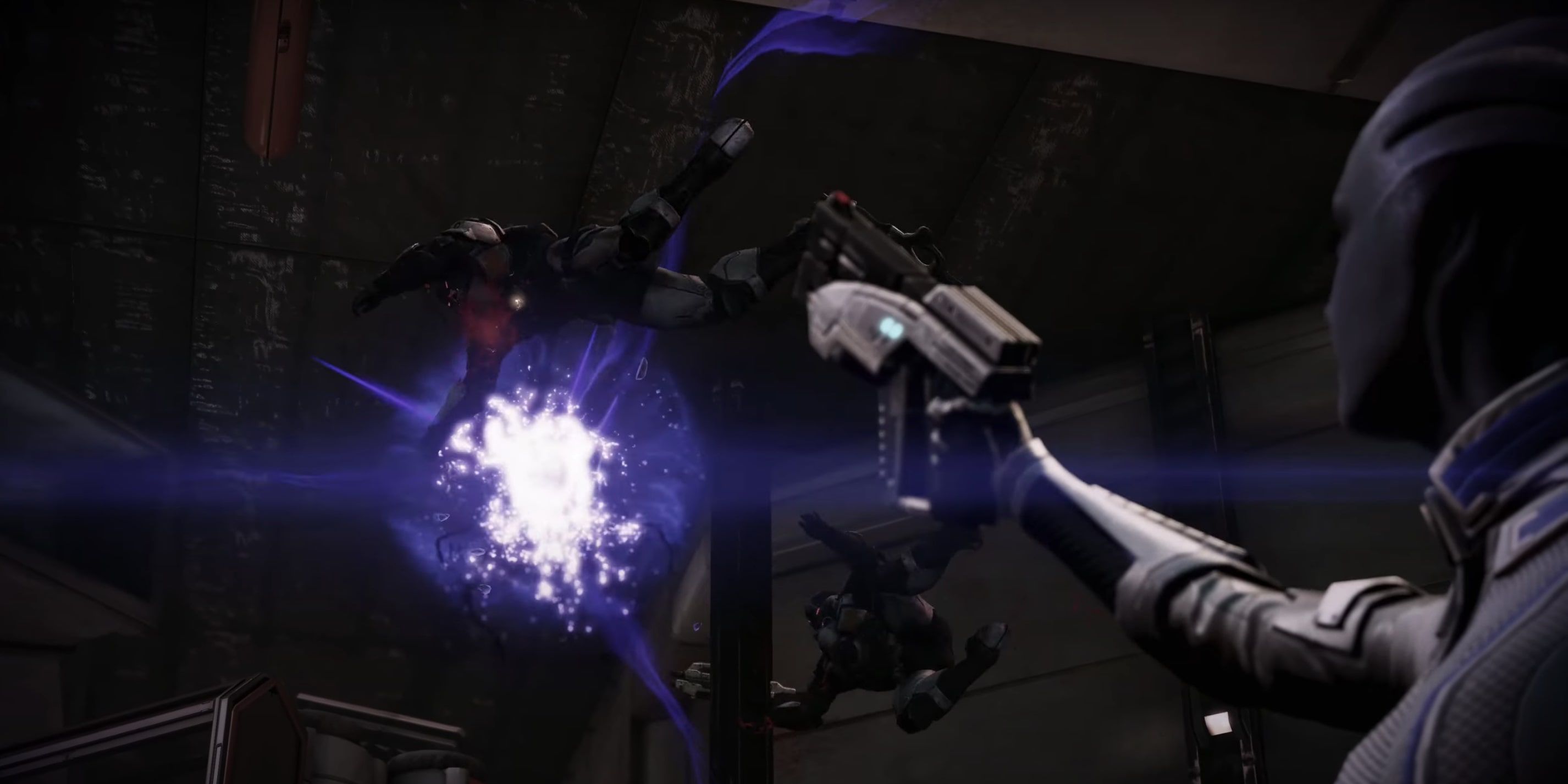 No matter what combat situation or mission you face, having Singularity at your disposal is a must. When used, Singularity fires a ball of Biotic power that serves as a gravitational pull against enemies. When fully upgraded it can launch multiple foes in the air at a time, rendering them helpless against bullets and power combos.

This power is available to either an Adept class Commander Shepard or is an ability that Squadmate Liara T’Soni possesses across all three games. For those wanting to complete the Legendary Edition on a harder difficulty or without having to rely on bullets to get you through, Singularity is a power to invest in. It is the most useful Biotic power there is and one of the best powers throughout all three games.