Mass Effect is a large franchise, consisting of four games, lots of DLC, several novels and comics, and more. As a result, there’s plenty of material to poke fun at or discover plot holes in. No corner of the canon – or even fanon – is safe from prying eyes. Not even the Illusive Man, with all his resources.

The Illusive Man is the leader of a human-first (xenophobic against aliens) organization called Cerberus. In the first Mass Effect the player encountered Cerberus operatives and their disastrous experiments, but don’t meet the boss behind it all until Mass Effect 2. These are some of the best memes about him available online.

10 A Total Waste Of Time 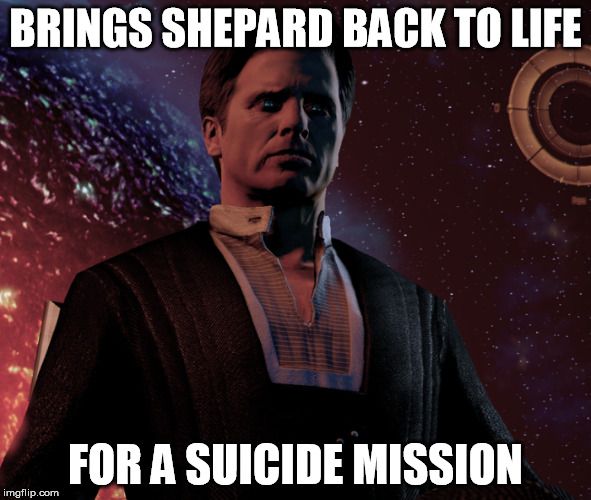 Mass Effect 2 begins with the Illusive Man investing an enormous amount of time and resources into reviving Shepard after they died in an encounter with Collectors. It ends with the notorious “Suicide Mission,” in which a huge number of Shepard’s companions could die if they aren’t prepared enough for it.

It’s definitely a strange choice to bring a person back to life only to throw them back into danger. Perhaps the Illusive Man was just so egotistical that he believed Shepard couldn’t fail so badly if they had Cerberus resources. 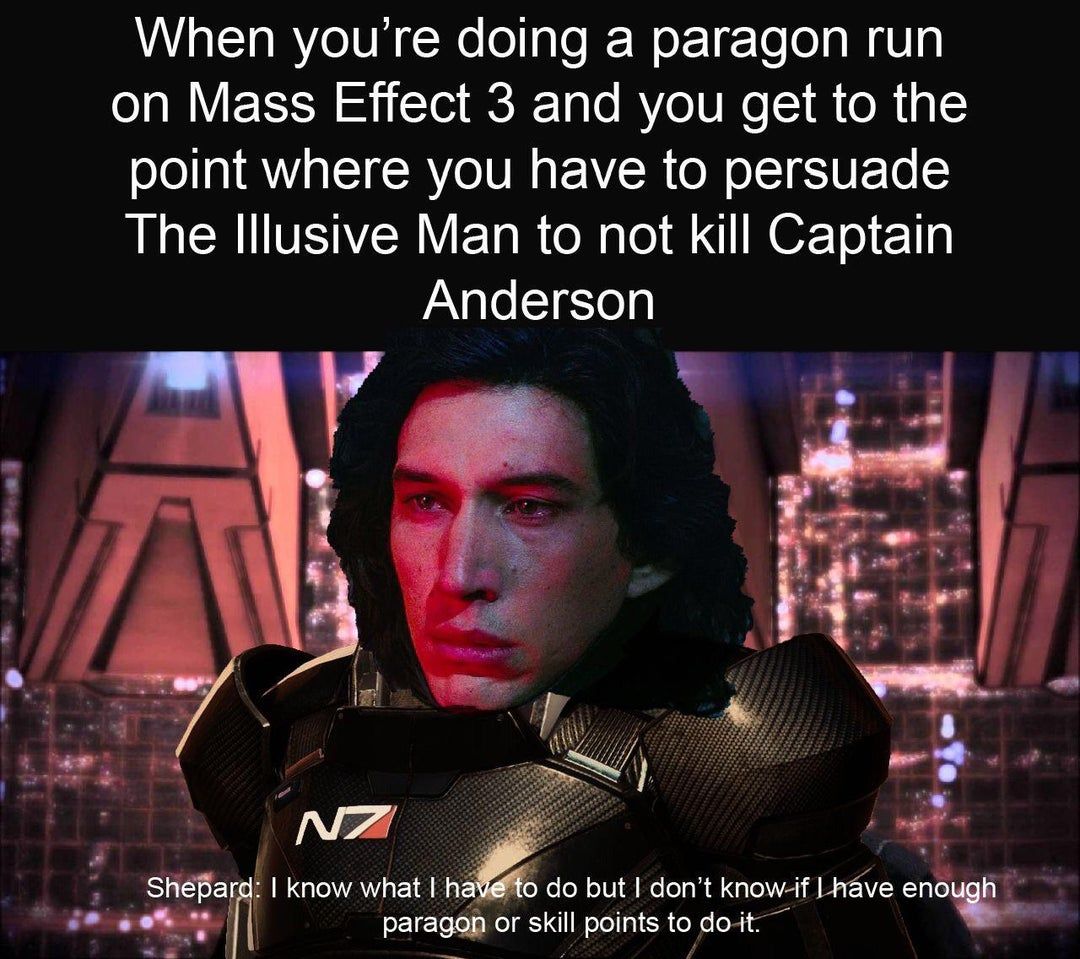 At the end of Mass Effect 3, the life of Captain Anderson – a character beloved by fans since the very first game – is put into the hand of the Illusive Man. You’ll need a high enough paragon rank to convince the Illusive Man to spare him.

This highlights a massive problem that players had with the Mass Effect trilogy – story moments and persuasion/intimidation checks were often set up on the back of your Paragon or Renegade score – so if you didn’t make sure all your decisions match up with your alignment, you’d be at a huge disadvantage. 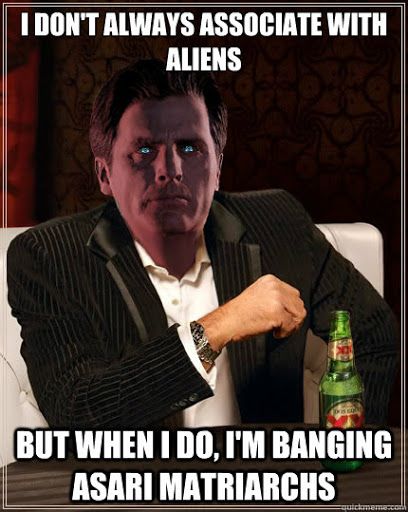 You’d have to be a pretty hardcore Mass Effect fan to catch this detail. Despite his xenophobia and hatred of alien races, he doesn’t seem to be immune to an Asari’s charms.

A “Profile” on the Illusive Man is included in one of the Shadow Broker’s Dossiers which includes a list of the Illusive Man’s “sexual liaisons” in the past week. It’s detailed that he met with Asari Matriarch Trellani twice. All the others on the list could be humans – but the role of “Matriarch” is unique to Asari culture.

7 Which Logical Fallacy Is This? 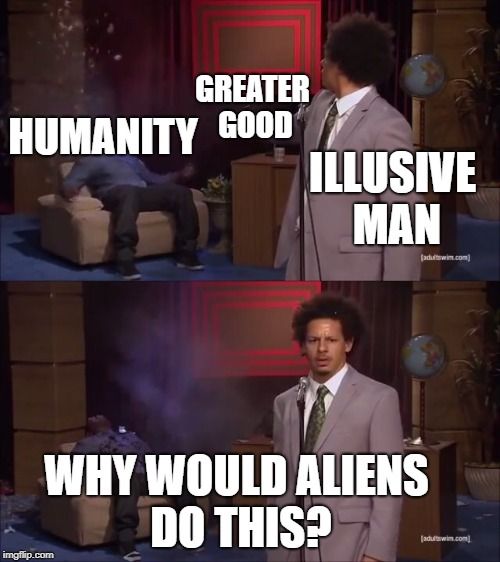 The Illusive Man is a chillingly xenophobic character in the trilogy. At the time, the franchise couldn’t seem to decide if they wanted to depict Cerberus as a Star Wars-esque revolutionary group or a horrifying terrorist organization. In hindsight, the fandom has definitely settled on the latter.

Just as with so many narcissists, the Illusive Man uses twisted logic to justify how the Big Bad Aliens are responsible for humanity’s suffering and not his own disruptive actions against human leadership.

6 Tim Is Just As Bad

One thing you may not know about the Illusive Man is his real name: Jack Harper. That’s just as boring as if it were “Tim.” It does undercut his character a little to discover that the big, bad Illusive Man was just an unhappy Alliance officer named Jack, once upon a time.

The game may depict him as a crazy genius but we wouldn’t be surprised to learn that Tim from Monty Python is just an old, raving Illusive Man. He certainly gets close to old, raving wizard levels of insanity by the time of Mass Effect 3. 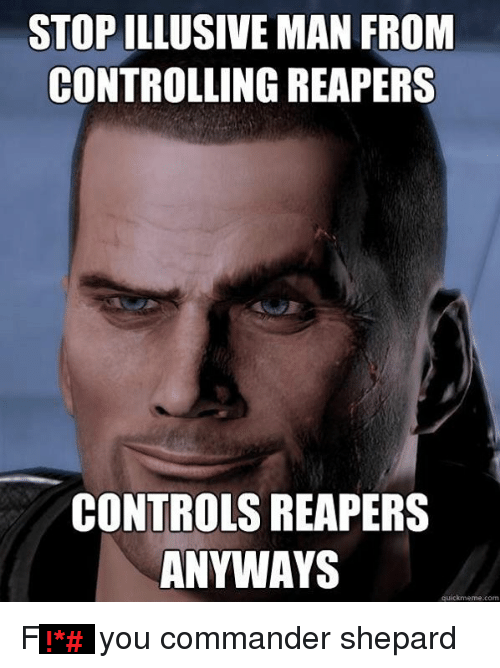 The endings you could see during the finale of Mass Effect 3 were controversial, to say the least. Players felt they were full of plot holes, were too clearly coded as “good” and “bad,” and didn’t allow for a lot of freedom for Shepard to make a nuanced decision.

It’s not helped by the fact that one of the choices Shepard can make, to take control of the Reapers, is exactly the same as one of the primary antagonists of the final game. The Illusive Man has been indoctrinated, sure, but Shepard’s sure been in contact with a lot of Reaper tech too. 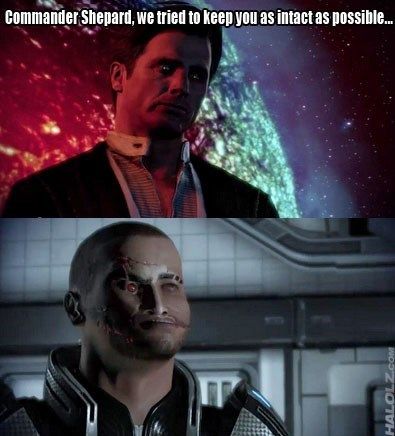 Among the Illusive Man’s most amusing and incredulous lines are the ones in which he tries to justify the Lazarus project. The Lazarus project was the endeavour, run by Miranda Lawson, to revive Shepard.

The Illusive Man says that they completely reconstructed Shepard’s face, which justifies why the player is able to make a Shepard that looks nothing like their original ME1 character. He claims that he didn’t put a mind control chip in Shepard out of fear of losing whatever made Shepard special, even though it’s totally within his character to mind-control special people, so the writers didn’t have to worry about a brainwashed Shepard for ME3.

3 Lung Cancer Ain’t Nothing In The Future 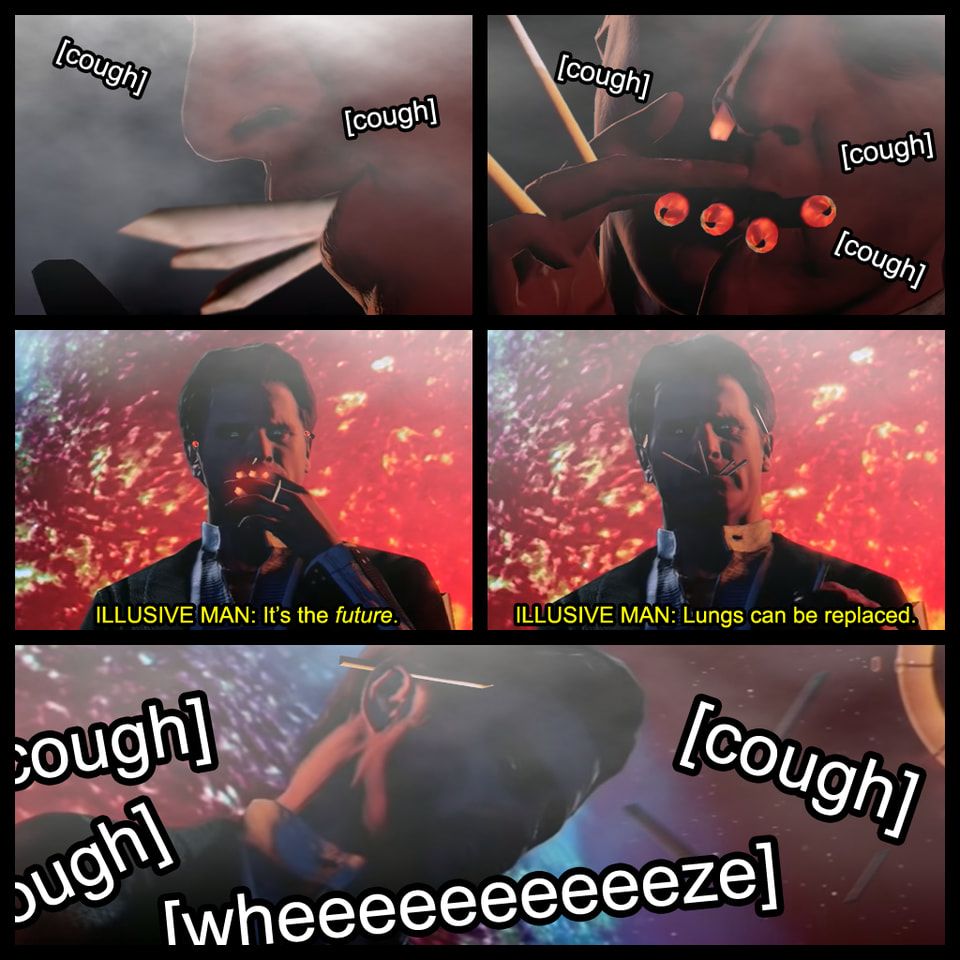 After years of human knowledge acknowledging the terrible health effects and addictive nature of cigarettes, you’d expect that people would have entirely given up on these cancer sticks. We suppose that when you can bring a dead person back to life, the worries of the ordinary world kinda… fade away. Maybe the Illusive Man thinks he’s being retro.

Fun fact: Michael Sheen, the voice of the Illusive Man, doesn’t smoke. So, during the scenes where the Illusive man has a cigarette in his mouth, he would use the butt of a pen and put it in and take it out of his mouth. 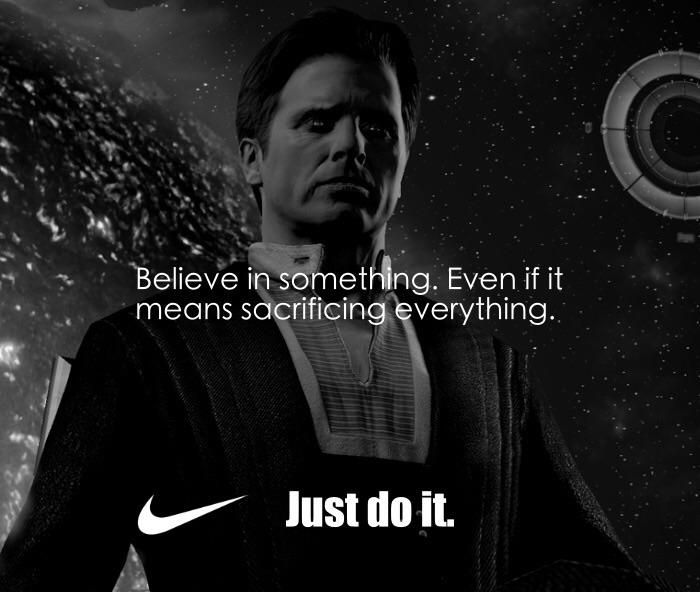 Nike is known for its ads with simple messages and its iconic “swoosh” symbol. Are the words in this meme pulled from an Illusive Man quote or from a Nike ad? At the end of the day, if you can’t tell the difference, does it really matter?

Mass Effect players are all too familiar with the Illusive Man’s monologues which supposedly justify his actions. He uses big words and big ideas but doesn’t seem to ever be on the ground, observing the effect those big ideas are having on the galaxy. 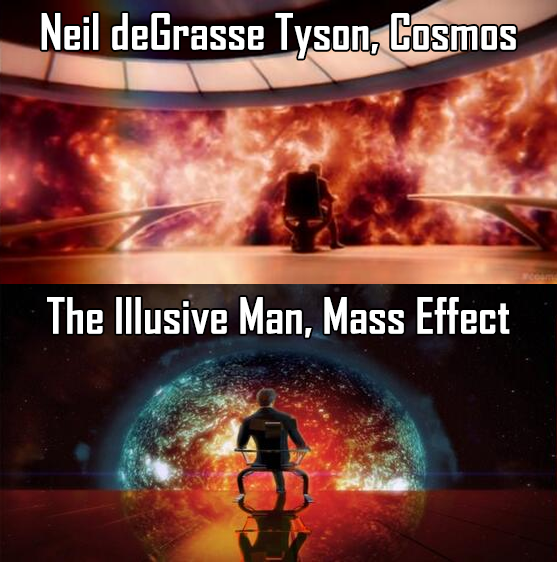 Neil deGrasse Tyson is an American astrophysicist who, unlike most other scientists, is well known in the West for his charisma, humour, and patient willingness to speak with people who are not specialists about his work.