Wizards of the Coast has revealed the full October 2022 Secret Lair Superdrop for Magic: The Gathering, giving us way more big names than the already-announced Post Malone crossovers.

Secret Lair is Magic’s limited print run storefront, where ‘drops’ with exclusive new art (and sometimes entirely original cards) are made available for only a few weeks. Joining Postie and the three Warhammer drops in October’s bumper crop are, among other things, horror manga legend Junji Ito and Metal Gear artist Yoji Shinkawa.

Announced on the WeeklyMTG stream, each of these drops will be available only through the official Secret Lair site starting October 17. As with most Secret Lairs, they will only be available for approximately one month before they are removed from sale. 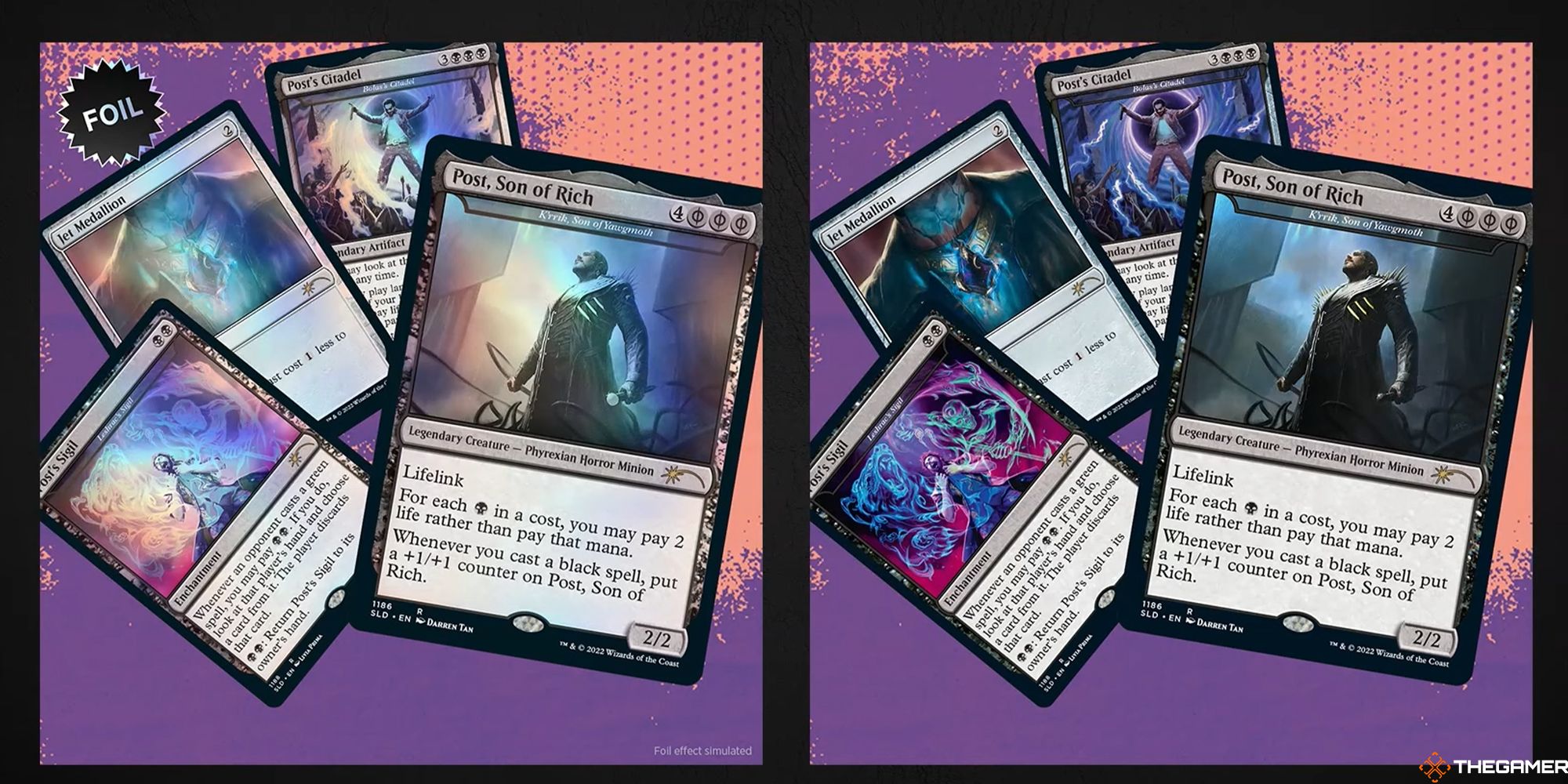 Some people may find it weird that musician Post Malone would have anything to do with Magic, but he’s actually a big fan of the game and over the last year has become an active part of its community. He’s appeared on multiple Commander-focused YouTube channels, most notably Game Knights, and even ran an event challenging someone to beat him for $100,000.

These are some spicy cards – particularly Bolas’s Citadel, which is a popular combo piece and easy game-ender with its ability to play cards and pay life instead of mana.

Notably, these are not considered part of Magic’s wider crossover brand, Universes Beyond and don’t have the usual triangle foil stamp found at the bottom of them. They instead fall more into the same territory as last year’s Innistrad: Crimson Vow Dracula cards, or the year before’s Ikoria: Lair of Behemoths Godzilla ones. 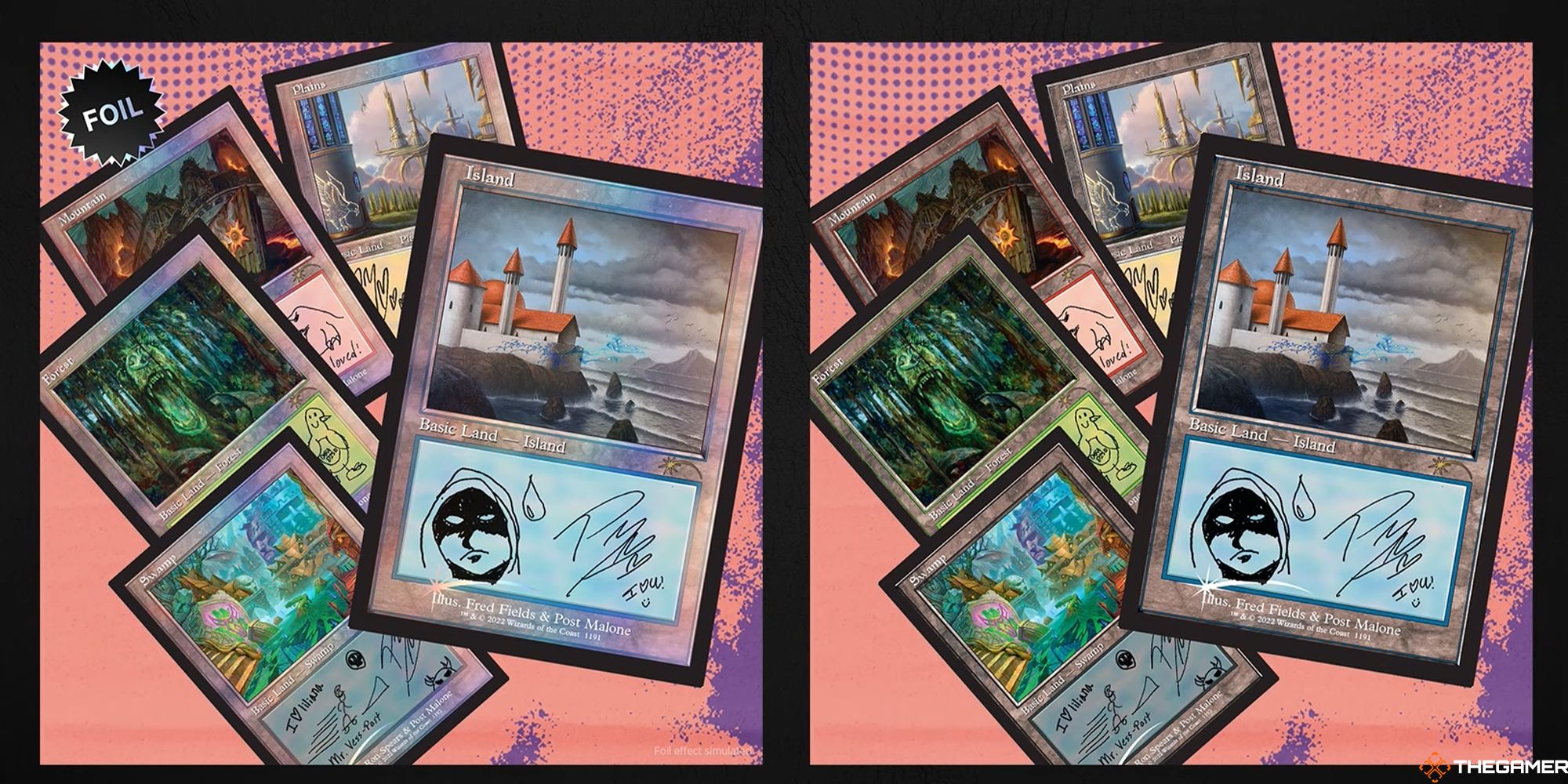 It wouldn’t be a crossover Secret Lair without a lands tie-in. While these five-card drops are sometimes controversial for not providing enough to kit out an entire deck, they’re also some of the Secret Lair cards most likely to pop up in MTG Arena, where you can use an unlimited amount of them.

With art by classic MTG artists in a retro frame, Post Malone has contributed to these by signing and putting doodles in the text box area. For instance, the Island has a little picture of Jace Beleren drawn by Postie, while the Swamp features a note saying he loves Lilliana Vess. 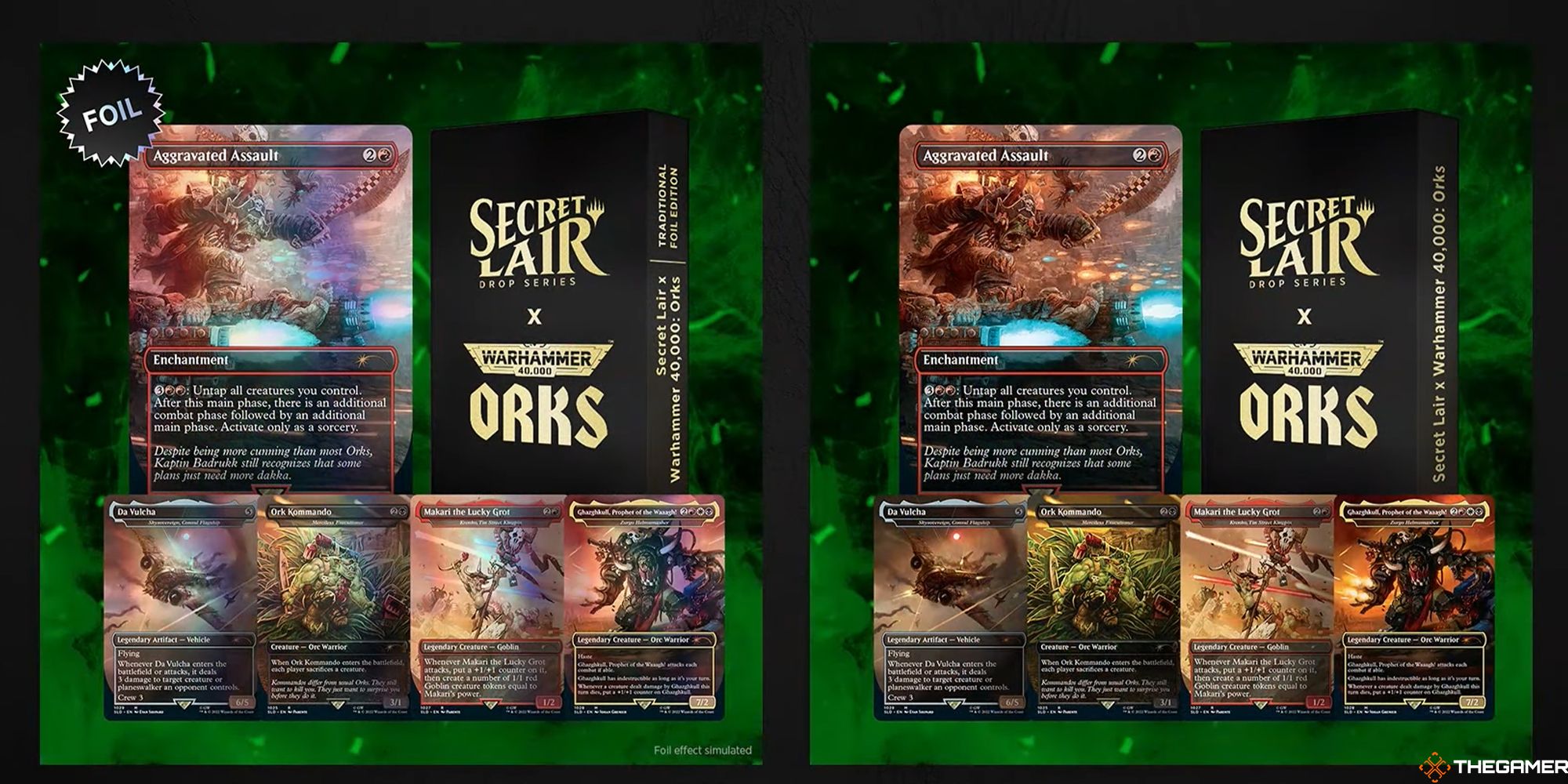 To tie in with the recent Warhammer 40,000 Commander decks, three Warhammer-flavoured Universes Beyond Secret Lairs are included in this month’s superdrop. While they don’t all look at the grim darkness of Warhammer 40,000, the first of the three visits one of its most popular factions that weirdly didn’t get its own deck: da Orkz.

In the drop are five reprints of white, black, or red cards that have been given a little bit more dakka-dakka with Ork-themed art:

Aggravated Assault is easily the most exciting reprint here for Magic fans, as buying it as a single can often cost more than this entire drop. Da Vulcha is also a popular part of the Pioneer format at the moment, serving as a backup strategy in Greasefang decks when Parhellion II gets taken out of play. This is probably a bigger win for Warhammer fans, though, as the Orks were noticeably absent from the 40K Commander decks, despite being such a huge part of the tabletop game and the overall feel of the setting. 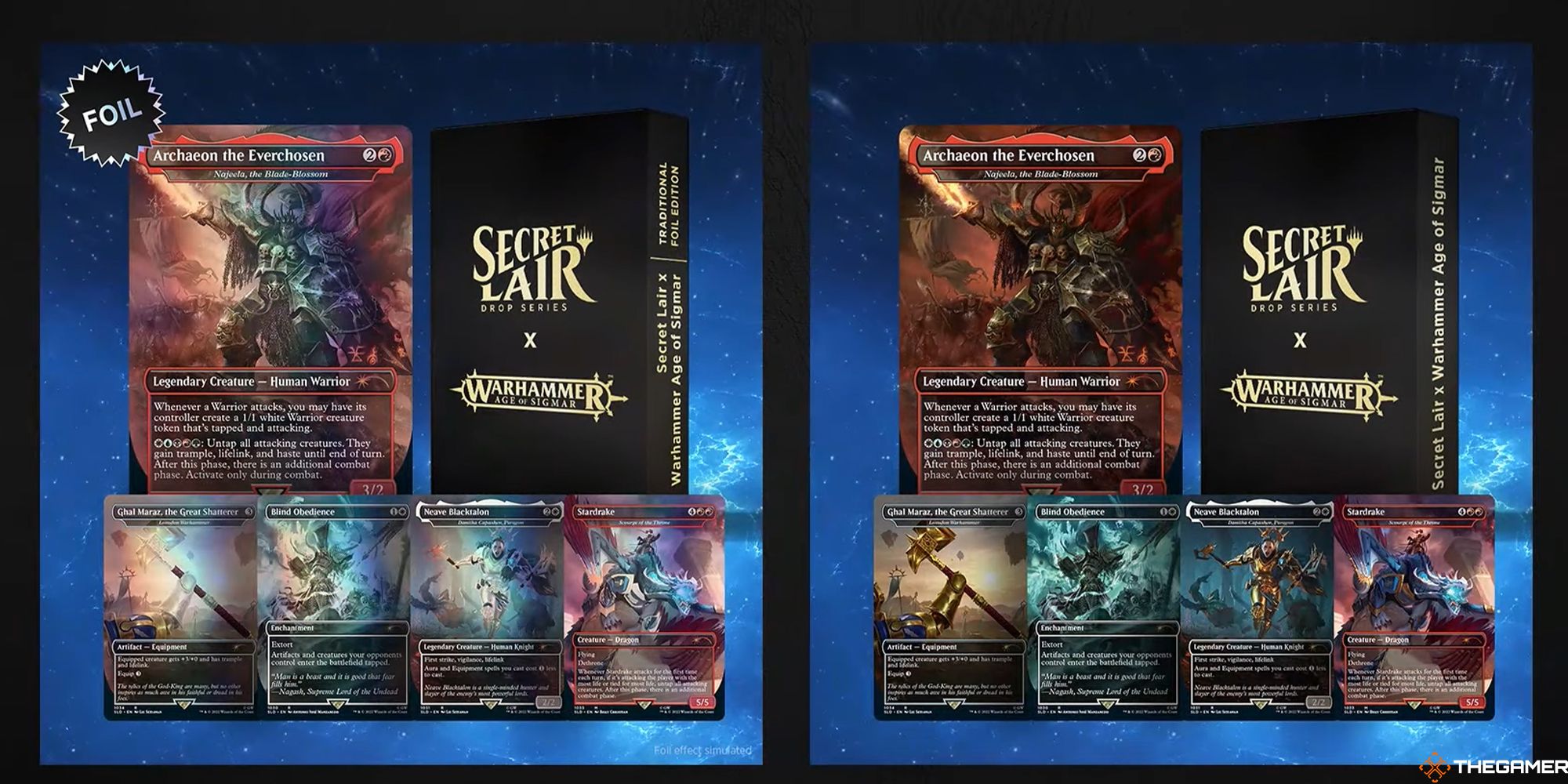 The second of the three Warhammer Secret Lairs takes us away from the 40K setting and instead to Age of Sigmar, its newer, fantasy-flavoured setting that replaced the original Warhammer in 2015. These cards look a lot more ‘traditionally Magic’ than the 40,000 ones, and even include an actual Warhammer to play with.

The cards here are less exciting than the Ork drop’s Aggravated Assault, but Najeela, The Blade-Blossom is still a popular five-colour commander, and Blind Obedience pops up in a lot of different formats as a light stax piece. 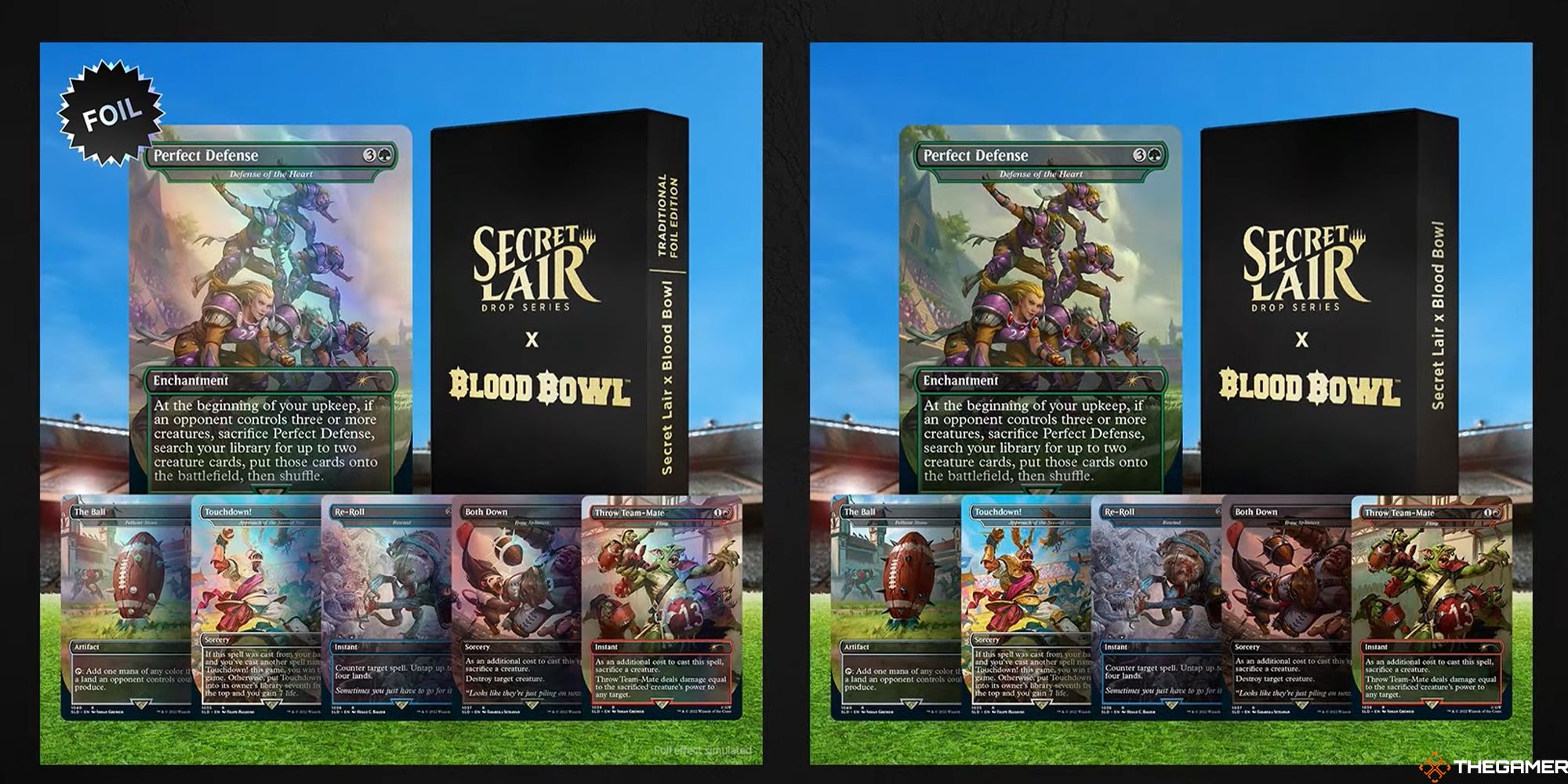 Just like Orks and Age of Sigmar, Blood Bowl’s drop are five reprints:

For Magic players, this is easily the least appealing of the three Warhammer drops. It’s not that the cards aren’t good – Bone Splinters is a popular removal spell, Defense of the Heart is great, and Fellwar Stone is a Commander staple. But many of these are also incredibly common cards, which means you’re buying this more for the art than anything else. 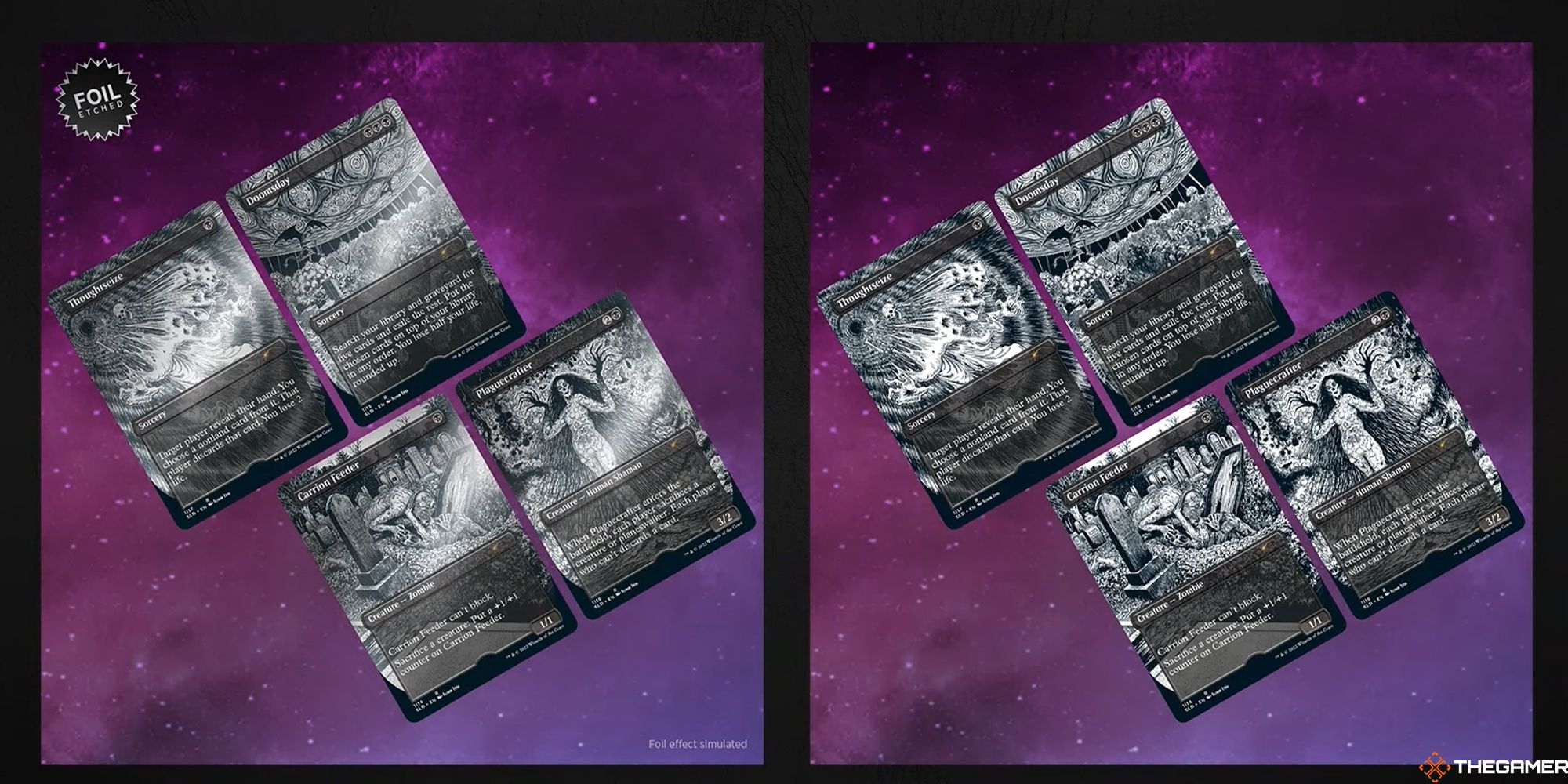 All four see regular play in a number of formats, but for Magic players it’s going to be that Thoughtseize that is the most appealing as it’s one of the most-played cards in the game, particularly in formats like Modern and Pioneer. Plaguecrafter is a great card too in Commander, which can get each opponent to sacrifice one of their own creatures (and give you lots of death triggers at the same time). 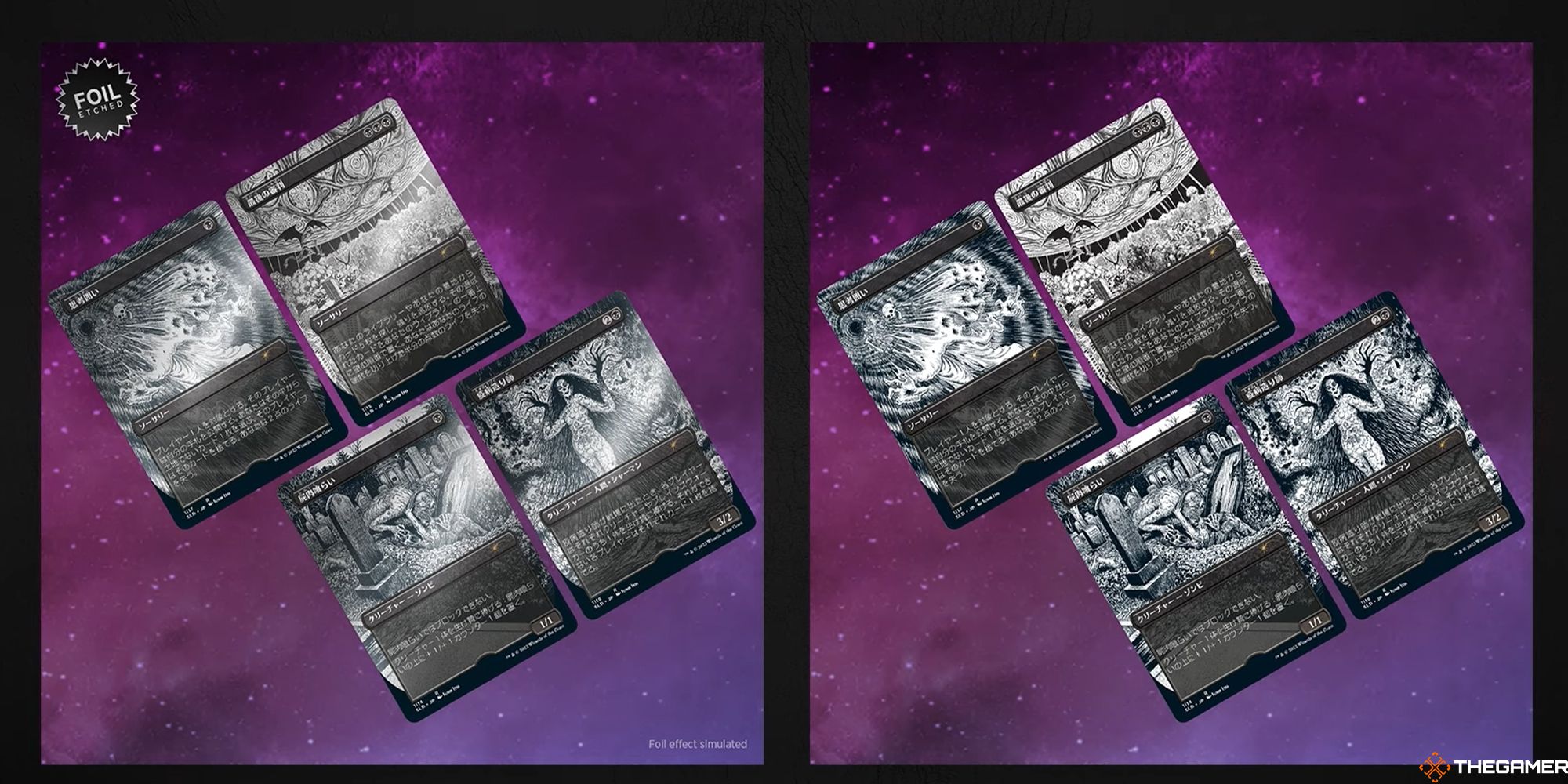 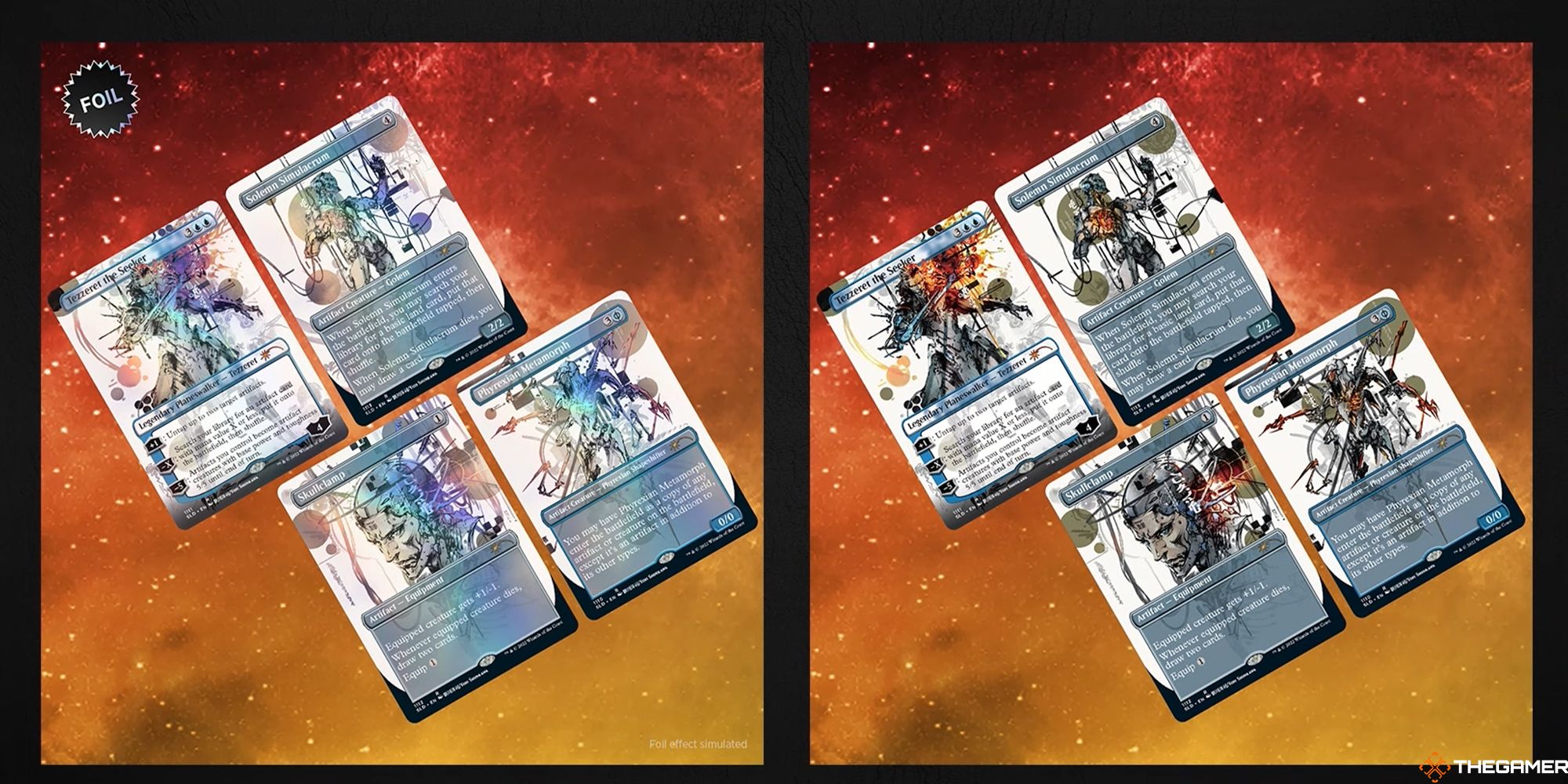 Oddly, Junji Ito isn’t the only Hideo Kojima collaborator to get a drop, as Yoji Shinkawa – the artist behind Metal Gear’s iconic box and character art – is bringing four more cards in his style.

This isn’t the first time Shinkawa has contributed to Magic before, though. He produced the buy-a-box promo card for Kamigawa: Neon Dynasty, giving Satoru Umezawa a very Metal Gear Rising cyber-ninja look.

The four cards have a heavy artifact theme:

All four of these have playability in a number of formats, with Solemn Simulacrum and Skullclamp in particular being big parts of the Commander format. Skullclamp is notorious for its combo potential, letting you generate huge card advantage and wracking up the death triggers if you have enough small creatures to equip it to.

If Looks Could Kill 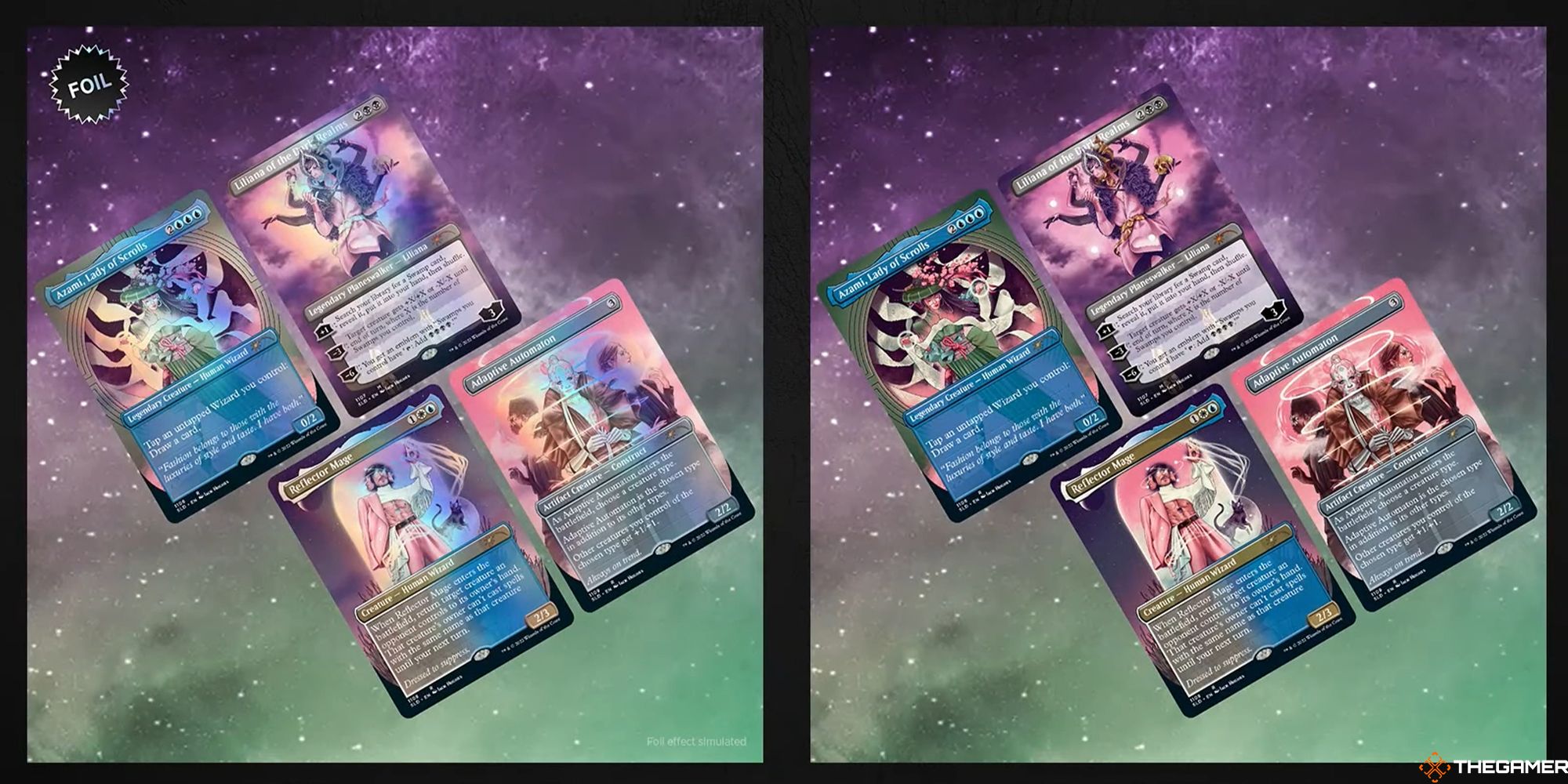 Jack Hughes is an artist known for his emphasis on fashion, and last contributed to Magic with the highly stylish showcase cards found in Streets of New Capenna. He’s back for his own drop which, while not officially part of the Artists Series we’ve seen for others like Nils Hamm, does feel incredibly similar.

Each of the four cards has been chosen and redesigned by Hughes, giving them a more modern, stylish flair. According to Hughes, each of the styles was inspired by the likes of Alexander McQueen, Gucci, and Acne Studios.

While the image released by Wizards shows Reflector Mage as having the more ornate legendary frame, and Lilliana lacking it completely, Hughes has confirmed on Twitter that this is a mistake that will be fixed in time for the cards to be shipped out.

The cards themselves are interesting, if not the most show-stealing ones out there. Lilliana is the most noteworthy card of the bunch, giving you access to lots of mana if you control enough Swamps. Reflector Mage is also a useful control piece, bumping creatures back to your opponent’s hand and stopping them from coming back out.

Regardless of their playability, these are incredibly stylish. If Looks Could Kill will cost $29.99.

The Weirdest Pets In The Multiverse 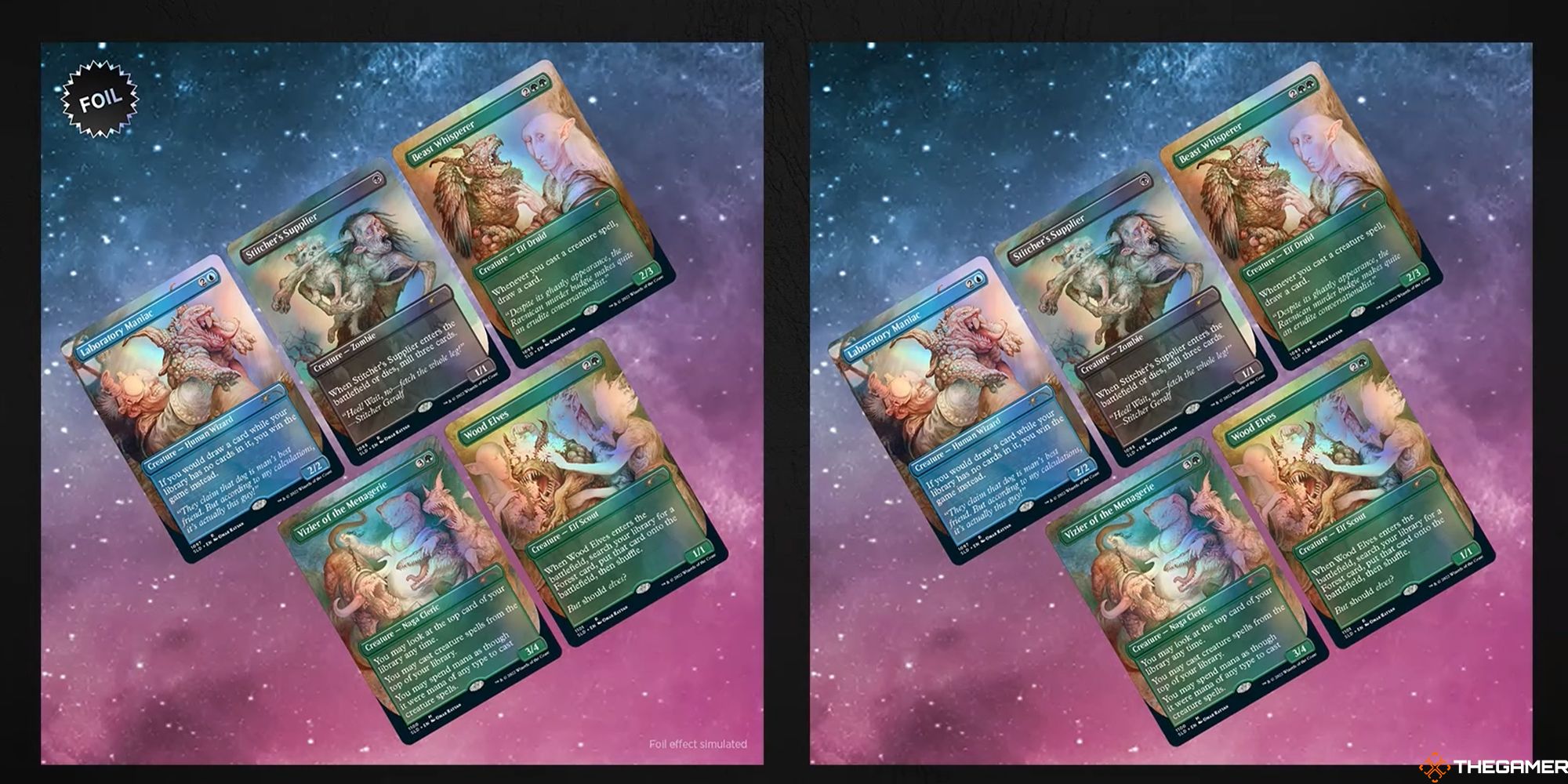 The final three are more traditional Secret Lair fair, with thematic art treatments rather than promotional crossovers or Special Guests taking the focus. The first of these is The Weirdest Pets In The Multiverse, which showcases five of Magic’s most-played creatures and their loyal companions with art by Omar Rayyan.

As far as cards go, these aren’t the biggest or splashiest, but they do see a lot of play. Laboratory Maniac is one of the game’s most famous alternate win condition, Beast Whisperer is a card drawing powerhouse in Commander, and Stitcher’s Supplier helps fuel many self-mill and graveyard decks.

It’s also worth pointing out this drop introduces a new contender for the funniest flavour text in the game, with Wood Elves’ “But should elves?”.

The Space Beyond The Stars 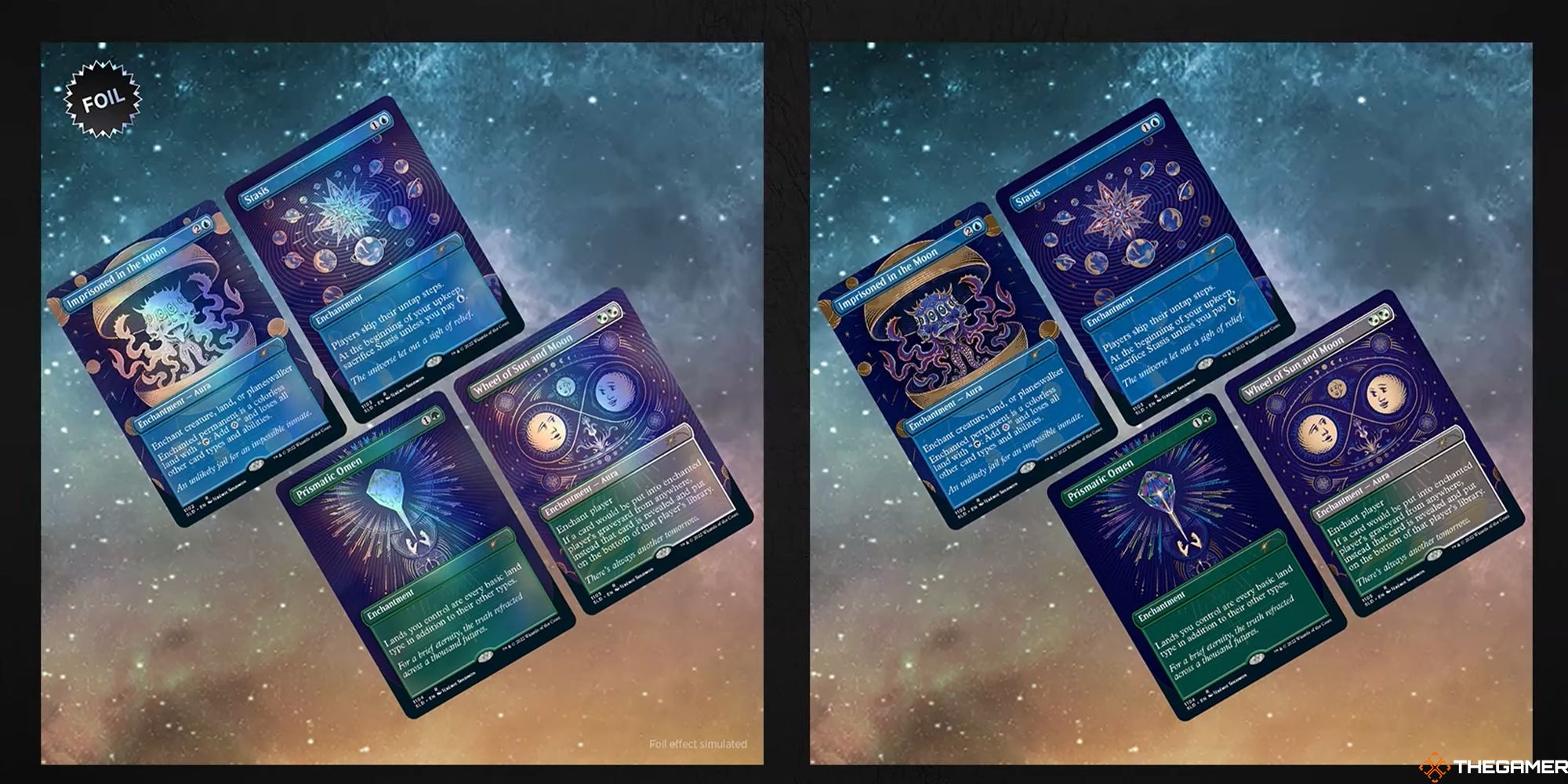 The Space Beyond The Stars is inspired by old astronomical diagrams, giving them all an old, mystical feel. Hidden behind that quaint art style, though, are some utterly terrifying cards that make this probably one of the most powerful drops in the whole collection:

Imprison in the Moon is an incredibly flexible way to get rid of a wide variety of permanents, including the usually difficult-to-remove lands. Prismatic Omen is one of the best mana-smoothing enchantments out there, letting all your lands tap for any colour, while Wheel of Sun and Moon is great for either completely shitting down graveyard decks or protecting yourself from mill.

But the real terror of this drop is Stasis. Debuting in the first ever set, Stasis is infamous for being one of the game’s best stax pieces, preventing anyone but you from untapping their lands and potentially bringing the game to a halt. This is only the second time Stasis has had new art in its 30-year history, which easily makes The Space Beyond The Stars one of the hidden winners of the October Superdrop. 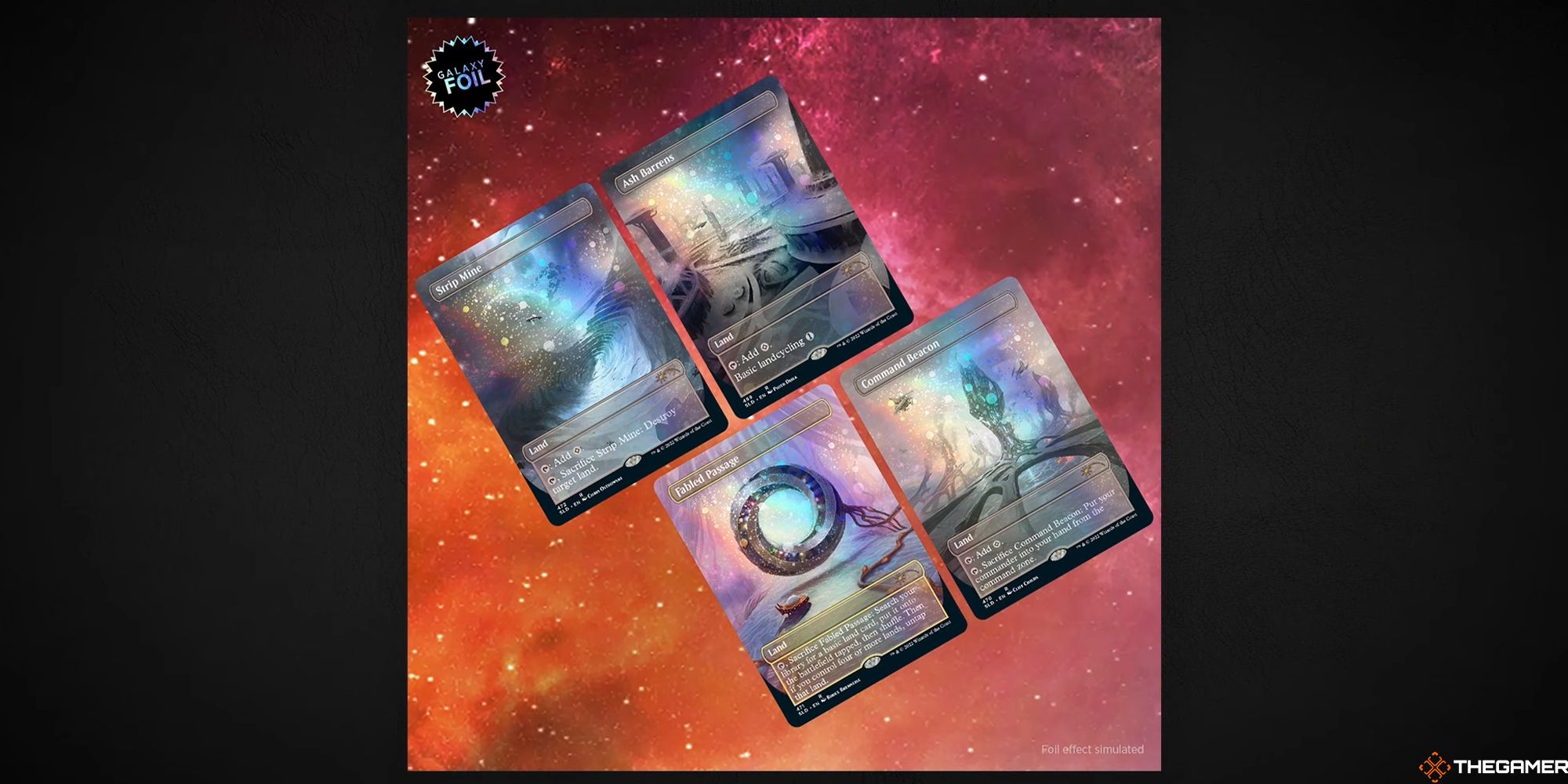 Finally, there’s Totally Spaced Out, a collection of four lands that use the new galaxy foiling method introduced in Unfinity. It’s a method that has been used in the Pokemon TCG for years, with the foil having various planet-like blobs and blotches to give it a more astral theme.

Now that Magic has finally pushed into galaxy foiling as well, this drop includes four land cards with new, highly alien art with the treatment:

While these aren’t exactly fetch or shock lands, they’re firmly in that second tier of lands that see play. Fabled Passage is the best of the generic fetches (like Evolving Wilds and Terramorphic Expanse), while Strip Mine is useful for clearing your opponent’s powerful lands out of the way. 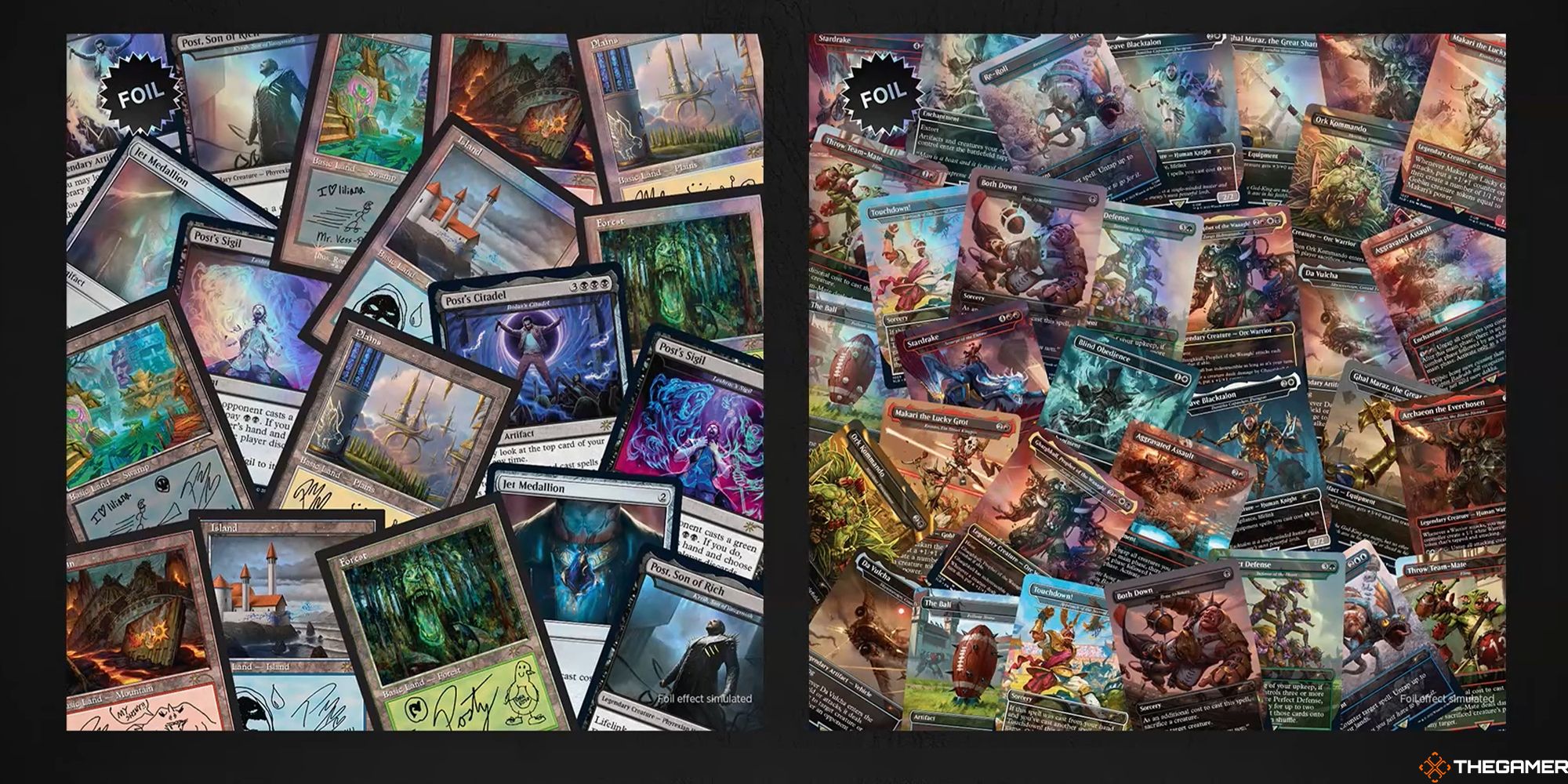 As with all Secret Lair superdrops, there are a series of bundles available that collect multiple of the drops together in a slightly reduced price. 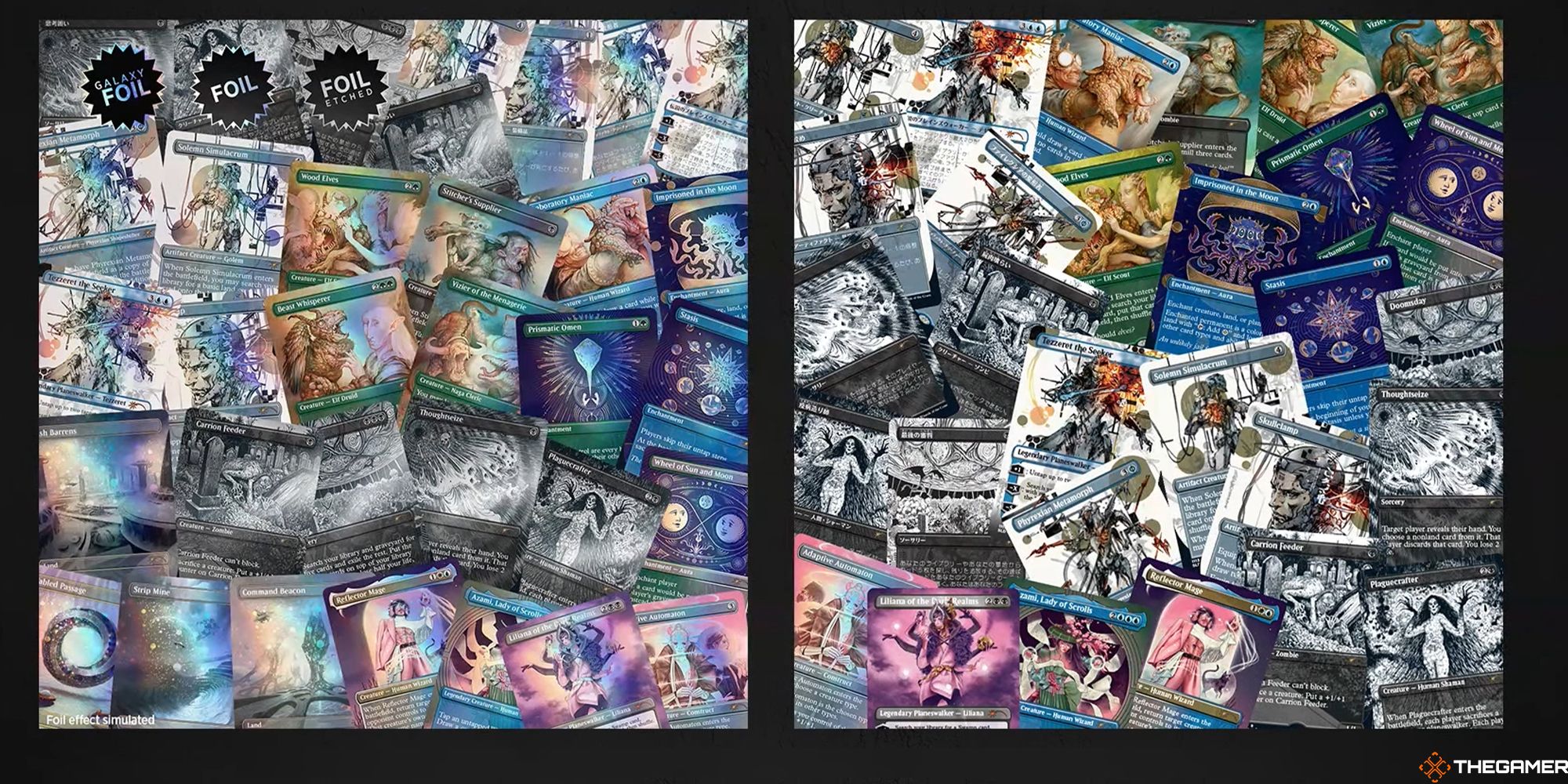 The following bundles don’t include anything from the Post Malone or Warhammer crossovers: