A new week for Magic: The Gathering’s Dominaria United previews means we pick up the pace as the hits begin to flood in. There were so many cards today, and a lot of them appear to be potential sleeper hits in a number of formats.

Whether it’s a compleated legend of Magic, a new Agent of Treachery for Merfolk, or the Treasure hate the game has so desperately needed that takes your fancy, day five of Dominaria United’s spoiler season has something you’ll enjoy. 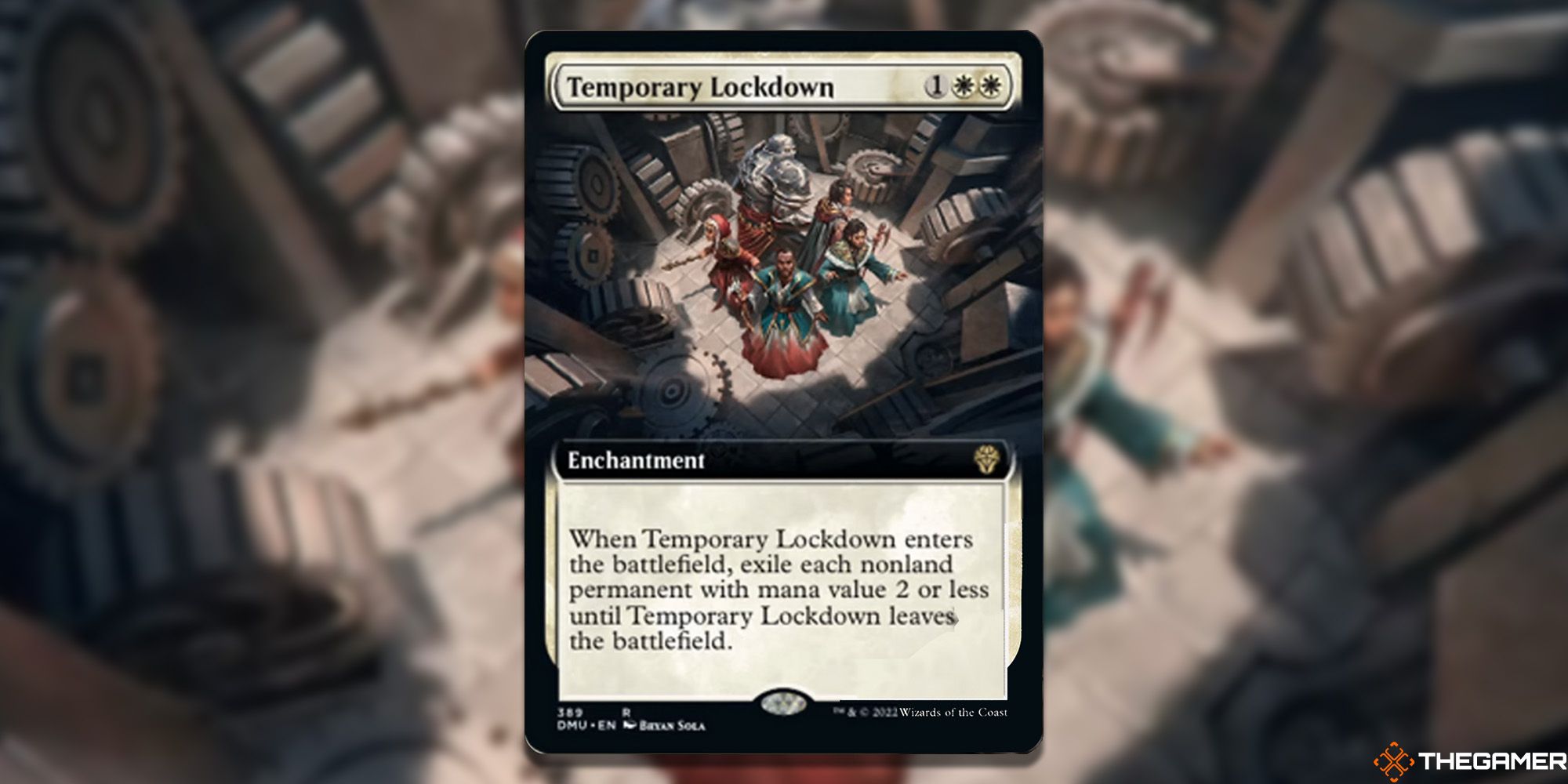 Adventures In The Forgotten Realms’ Portable Hole has been a huge part of Standard, and it rotating out will leave a big gap in the metagame. Fortunately, Temporary Lockdown is here not just to keep our premiere temporary removal needs in check, but also gives us something the game has been needing for so long: Treasure hate.

For just three mana you can completely wipe the board of all tokens, which have a mana value of zero. All those Treasures people were able to produce from Streets of New Capenna? Gone. All those decayed Zombie tokens? Goodbye. And, of course, these tokens wouldn’t come back when Temporary Lockdown leaves the battlefield like a normal permanent. 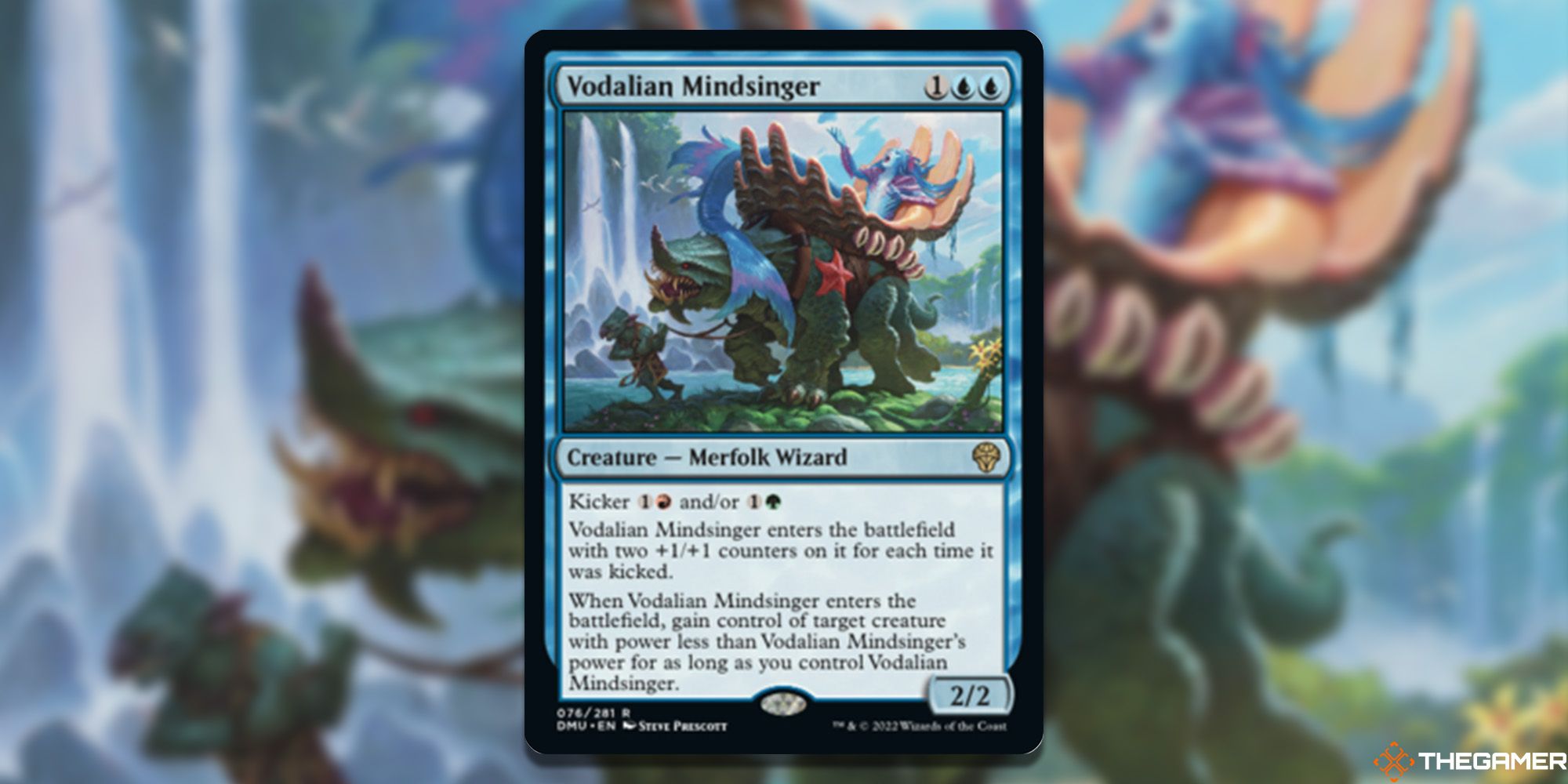 Vodalian Mindsinger enters the battlefield with two +1/+1 counters on it for each time it was kicked.

In Standard, this is decent. If you fully kick it, you’ll be able to steal anything with five power, which includes some of the format’s biggest problems, like Brutal Cathar. But the real power for Vodalian Mindsinger is going to be in formats like Pioneer and even Modern, which have a lot more support for Merfolk as a creature type.

On its own, the Mindsinger couldn’t grab much of anything – not even the current bane of Modern, Ragavan. But with creatures like Merfolk Mistbinder, Lord of Atlantis, and Master of the Pearl Trident – all of which can come into play long before the Mindsinger does – you’ll be able to grab much larger creatures without needing to ever even kick it. They’re all even grabbable through a Collected Company. It’s not quite an Agent of Treachery and only really comes together in Merfolk decks, but Modern’s generally lower mana curve means this could be a surprise hit. 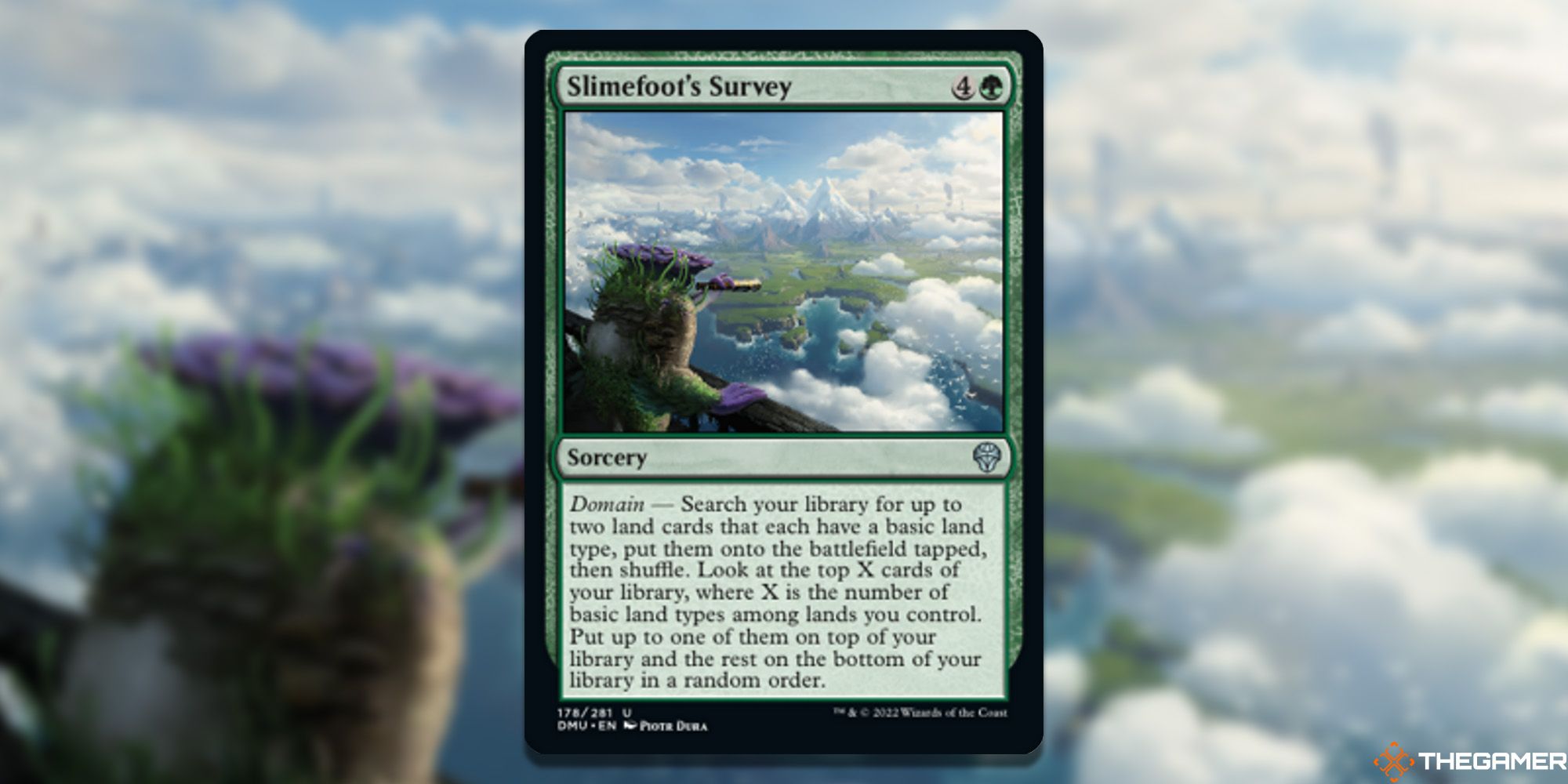 In most cases, getting two lands for five mana would be an awful deal. Migration Path also gets two and only costs four mana, after all. However, Slimefoot’s Survey is elevated from bad ramp to a potential winner of the set thanks to the fact it can get even non-basic lands if they have the basic land types on them.

Critically for Standard, this lets you pull two of New Capenna’s Triomes and put them right into play, which in turn gives you the full count of basic land types for domain. For just five mana you’ll be able to get one of the set’s most fiddly mechanics online, which is well worth it. 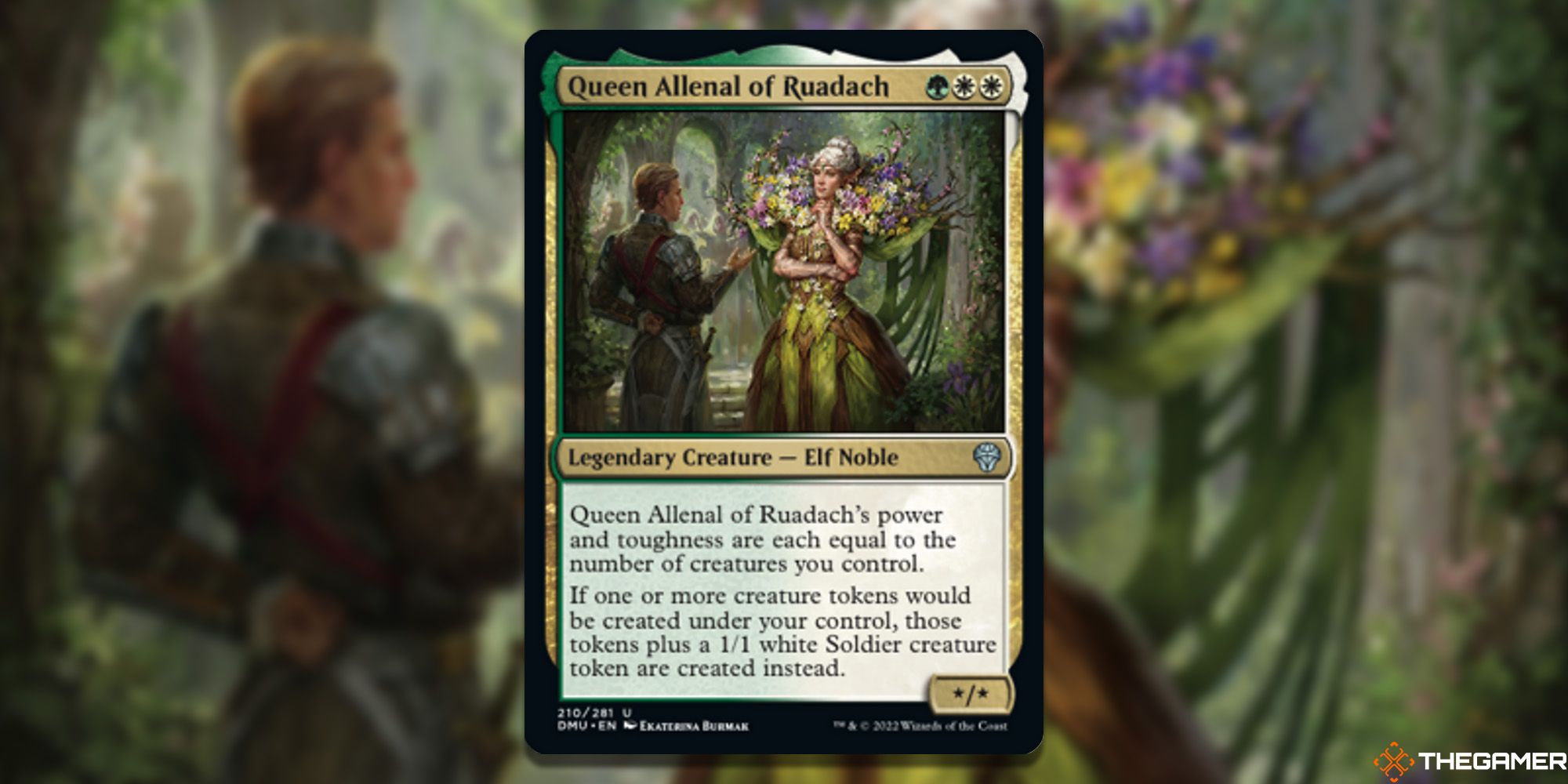 Queen Allenal of Ruadach’s power and toughness are each equal to the number of creatures you control.

Uncommon legendary creatures tend to serve as the set’s draft signposts, typifying that colour pair’s main strategy when playing in limited formats. While we haven’t seen too much of a unified Selesnya (white/green) archetype yet, Queen Allenal seems to suggest it’ll be a go-wide token creature theme by augmenting your token production with Soldiers.

It’s also worth remembering that this set uses enlist, making Queen Allenal an ideal an ideal way to buff up your attacking enlister by a huge amount. Make enough tokens, swing in with something evasive with enlist like Coalition Skyknight, add on Allenal’s power, and you’ve got a potential win right there. 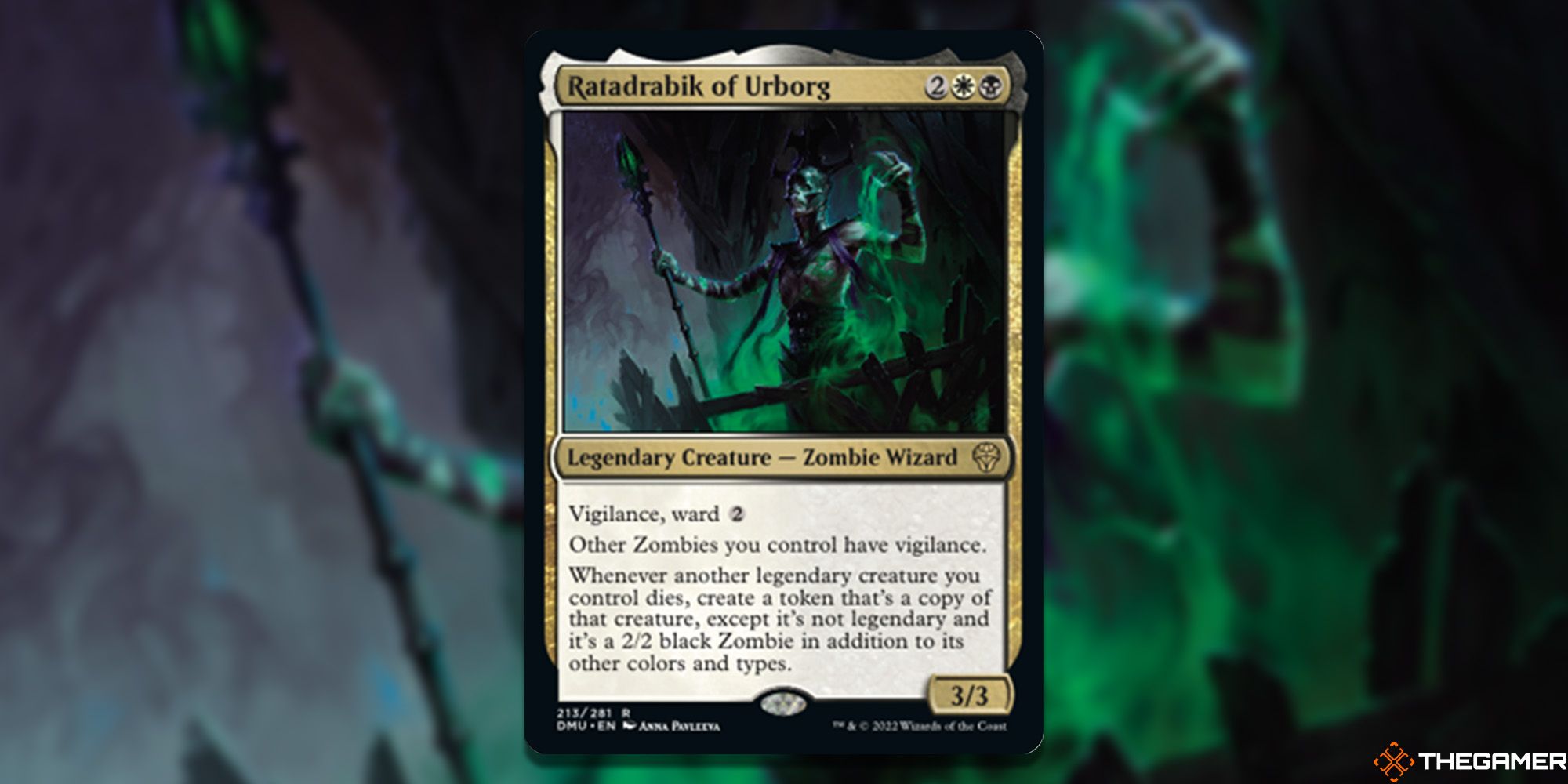 Other Zombies you control have vigilance.

Whenever another legendary creature you control dies, create a token that’s a copy of that creature, except it’s not legendary and it’s a 2/2 black Zombie in addition to its other colours and types.

A legendary-focused take on Theros: Beyond Death’s Nightmare Shepherd in Orzhov (black/white) colours might sound more limited at first, but the fact it can take your legendary creatures and rinse the legendary off them is important.

The tokens can be copied as much as you like, with no risk of the legend rule kicking in and forcing you to get rid of all but one. They’re also Zombies, which have a lot of support in Standard thanks to our two recent trips to Innistrad. 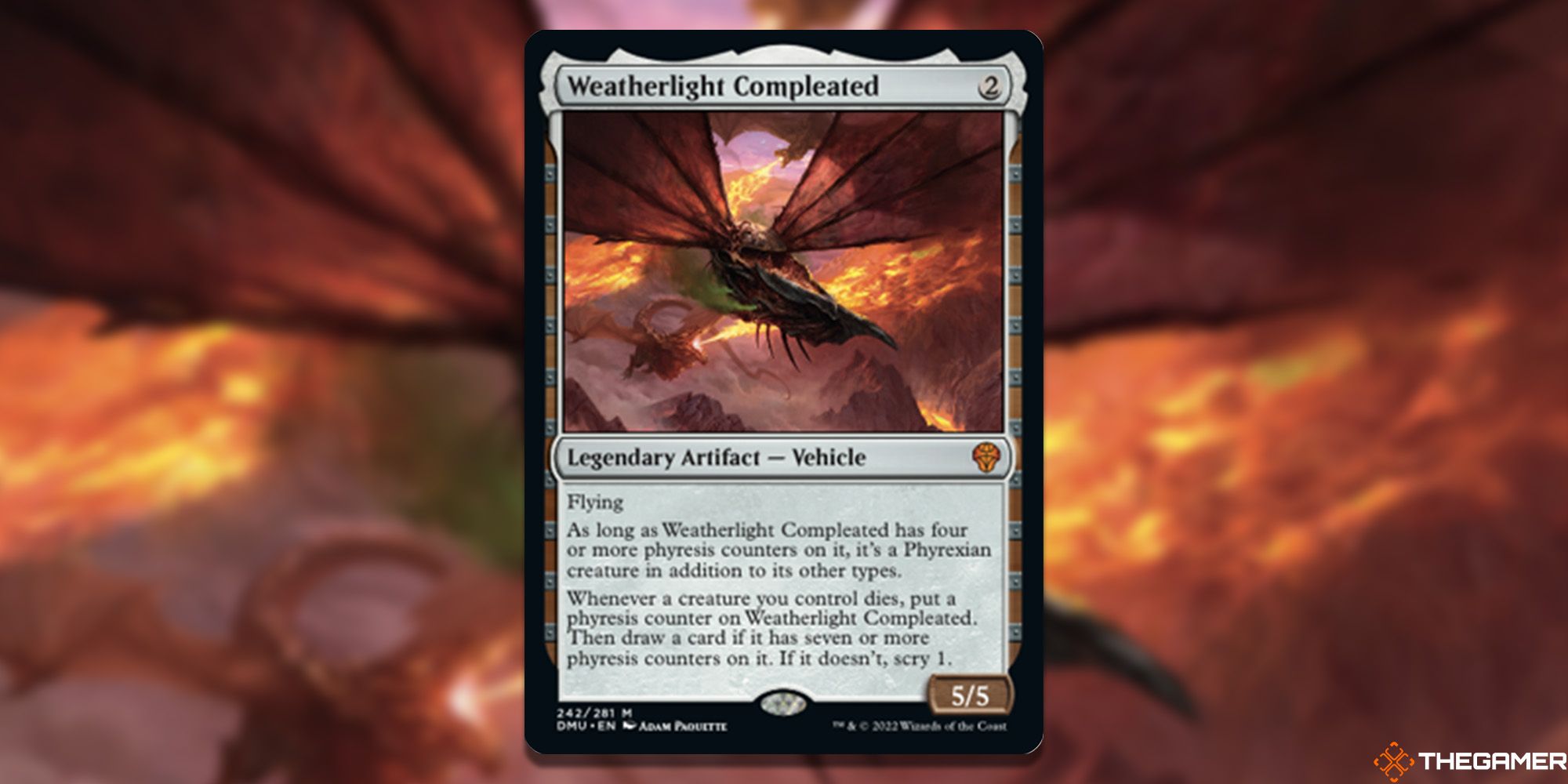 As long as Weatherlight Compleated has four or more phyresis counters on it, it’s a Phyrexian creature in addition to its other types.

Whenever a creature you control dies, put a phyresis counter on Weatherlight Compleated. Then draw a card if it has seven or more phyresis counters on it. If it doesn’t, scry one.

In a move that hurts almost as much as Jaya, Ajani, and Tamiyo’s fates, the Weatherlight – an iconic ship almost as old as Magic itself – has finally fallen to the Phyrexians. The result is Weatherlight Compleated, an uncrewable Vehicle.

What’s interesting about Weatherlight Compleated is that it almost works better as just an artifact instead of as a Vehicle you actually attack with. Once it’s gained enough phyresis counters, you’ll be drawing cards off of every creature you control’s death, which is ripe for abuse in the right deck. This ability is so good and so potentially game-winning that you’ll likely not want to swing in with an otherwise bland 5/5 flier, just to keep it in play for as long as possible.