You are here:
Home / Magic: The Gathering – The 11 Best Instants And Sorceries In Dominaria Remastered

Magic: The Gathering – The 11 Best Instants And Sorceries In Dominaria Remastered

Magic: The Gathering’s Dominaria Remastered set features game-changing spells to cast right from the heart of the game’s history. Most significantly, this reprinted collection delivers every classic one-mana tutor instant, fit for each color’s principal strength. From counterspells to mass destruction, Dominaria Remastered cooks up something good for every kind of planeswalker.

Unlike permanent casts, instants and sorceries only have one moment to make their presence known. End your opponents’ creatures, or empower your own. Sometimes they provide crucial card advantage for future plays. Other times, they gift your board state the exact effect it needs to pull off a narrow victory. Find out which instants and sorceries tickle your fancy within Dominaria Remastered. 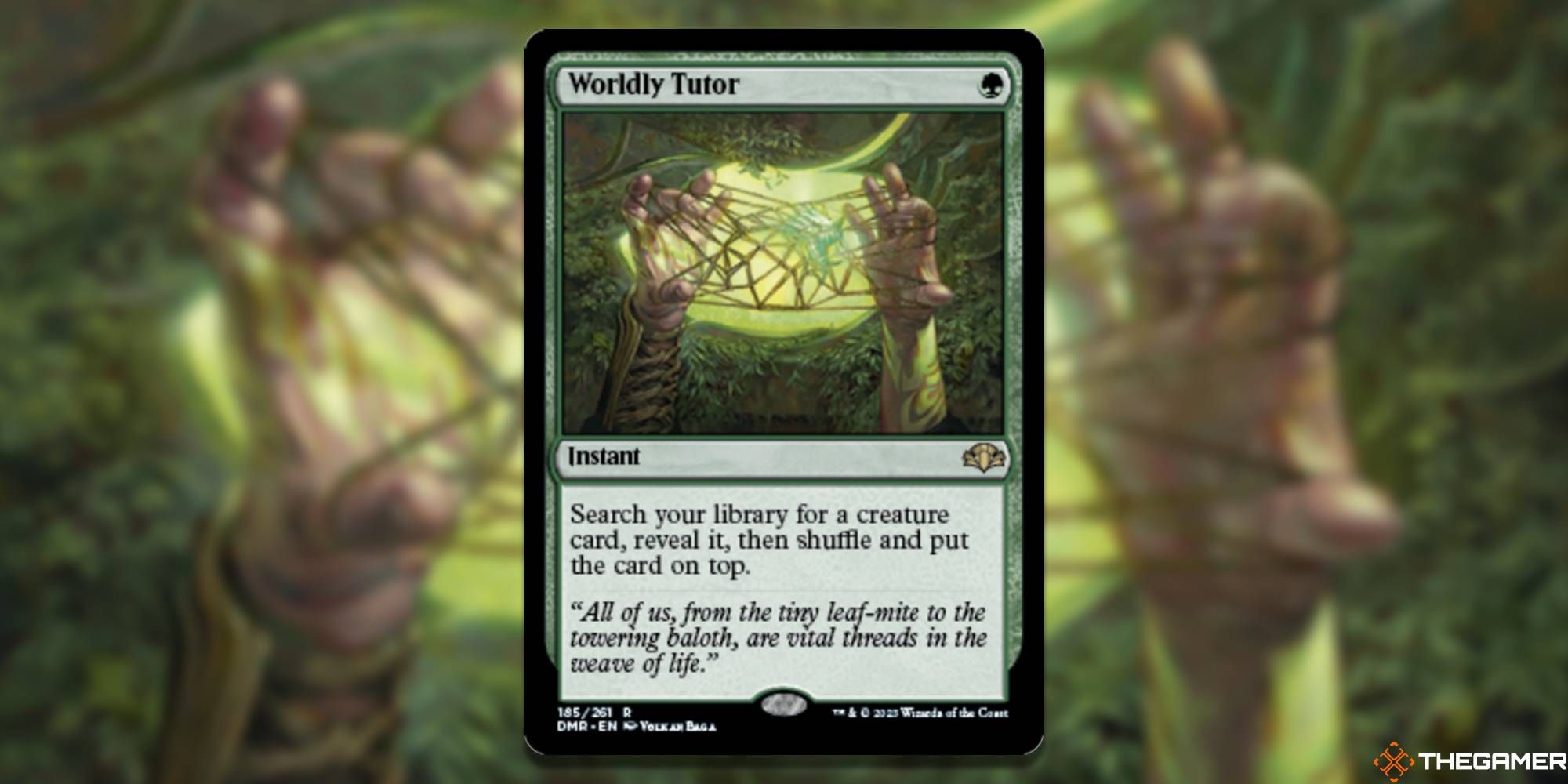 Worldy Tutor gives green their favorite beast right from the deck. At instant for one, tutors don’t get much better than this. Use in Commander decks to pick a partner in battle, or in more competitive formats to snatch the combo piece you need right when you need it.

Green mana values the interdependence of life. Though it’s the most creature-oriented color on MTG’s wheel, green also gains life, draws card, and controls enchantments. Certainly some of the largest creatures come out of green, so you can tutor a titan or the key Elf in your tribal army. Worldly Tutor lets you travel the world to find the creature you need. 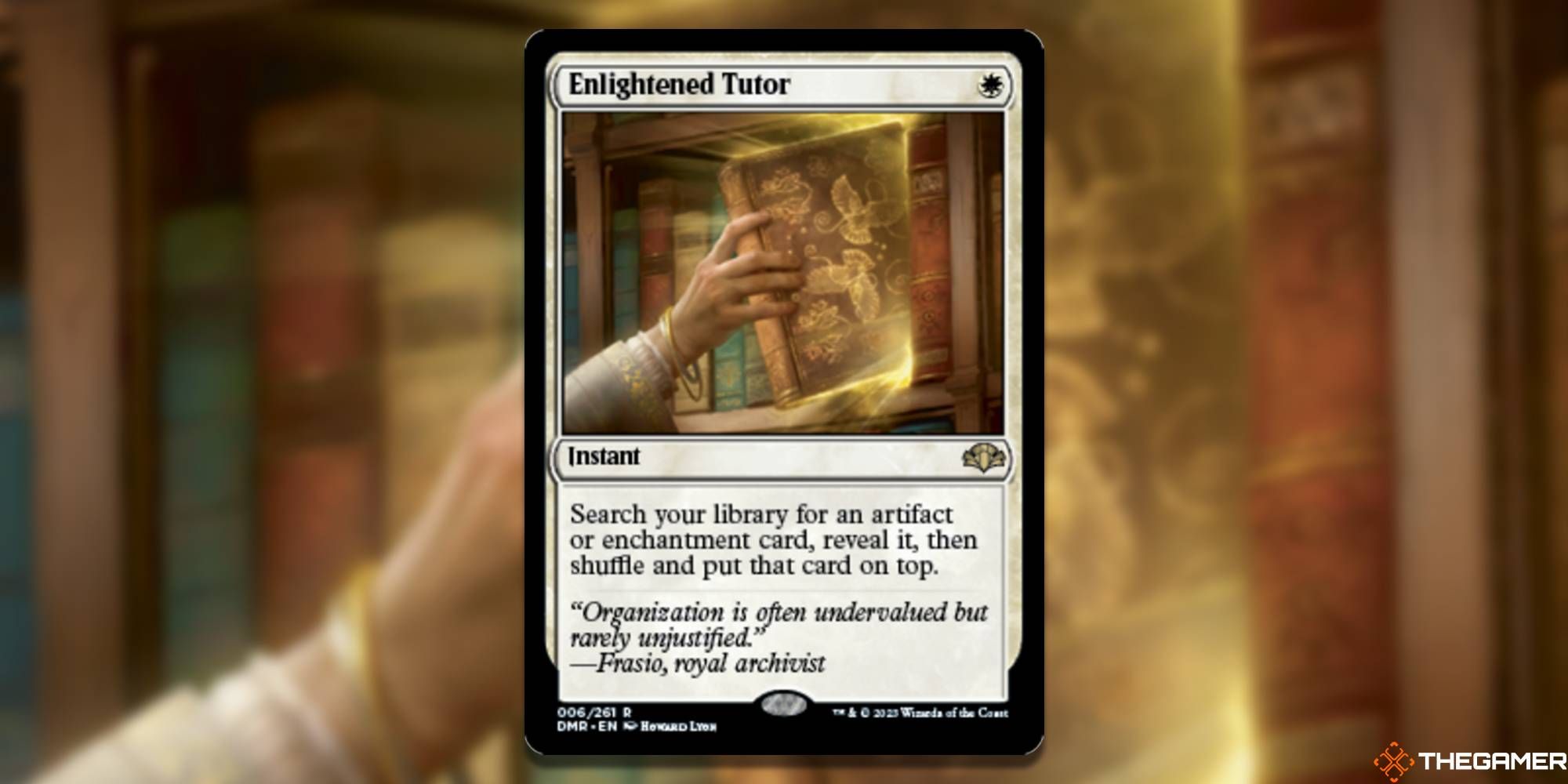 White mana values order, laws, and preventing damage as much as dealing it. Most artifacts and enchantments are best at enabling the rest of your spells and permanents to land better, providing synergies across the board state. Enlightened Tutor gives a planeswalker a way to plan attack and defense. 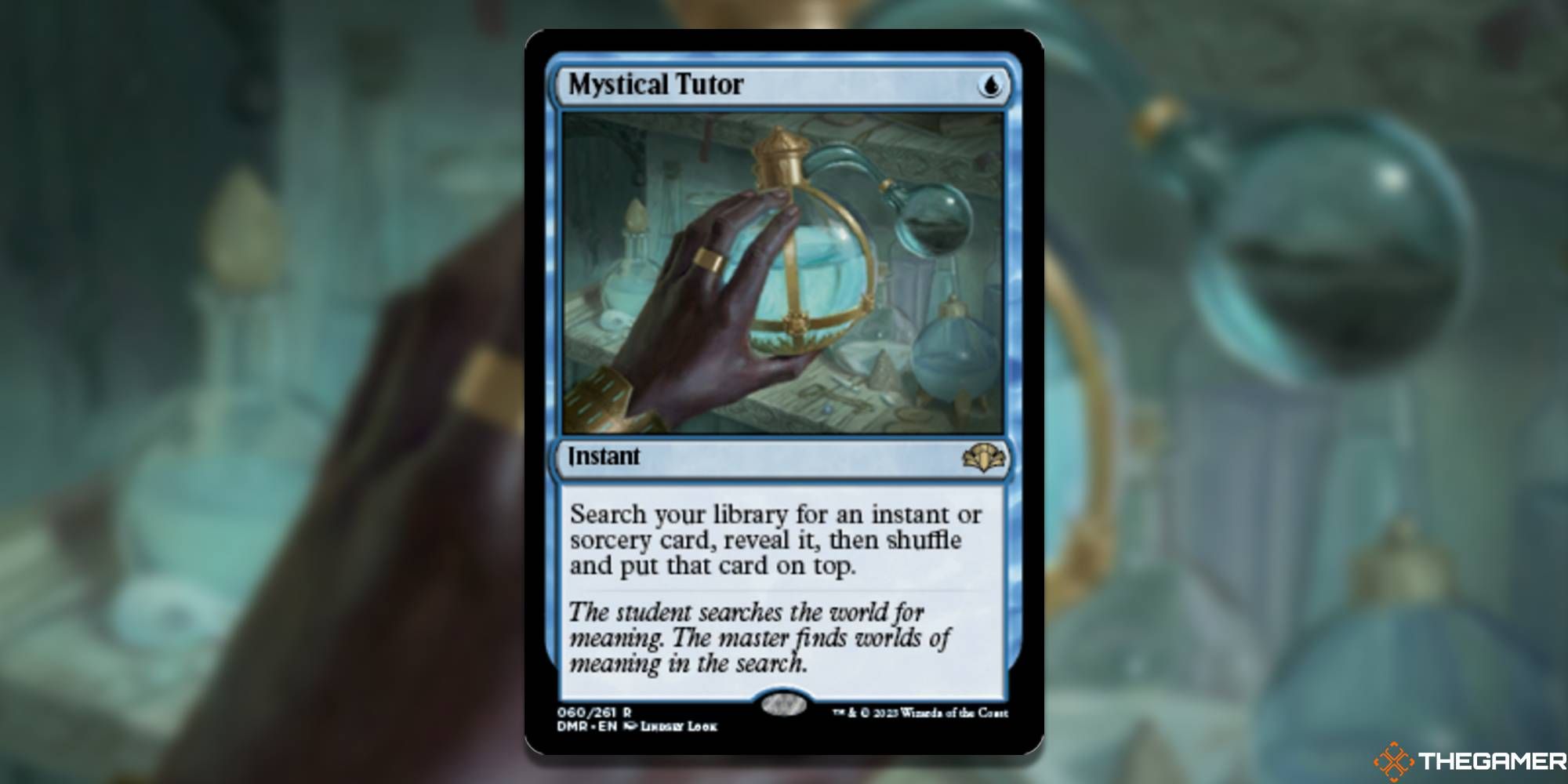 Mystical Tutor instantly finds other instants and sorceries. Thankfully for blue, with many draw triggers, it’s not hard to flip your chosen mark off the top of your library too. A true blue mage wielding Mystical Tutor in hand is suddenly holding any instant in their deck.

Blue mana values logic and technology the most. Blue mages, such as Urza and Jace, are often considered the faces of the game of Magic. Blue is at the center of every storyline because their Wizards are always changing the world (or traveling through all of time and space!) Mystical Tutor can cook up counters, or Cyclonic Rift, or whatever other instant or sorcery your opponents least want to see. 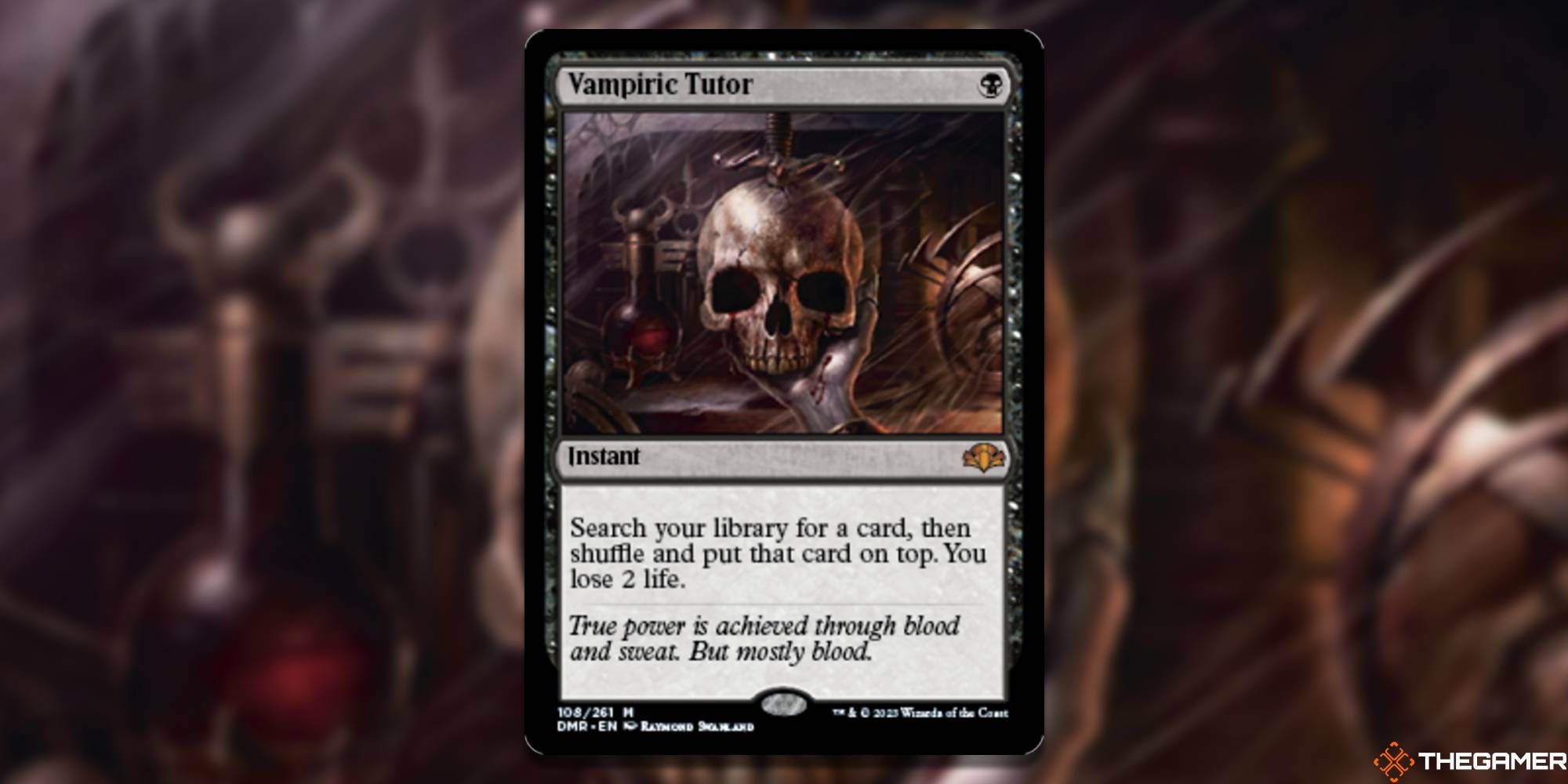 Vampiric Tutor is the ultimate in tutoring. Who knew Vampires would make for good teachers? As long as you gift Dracula two drops of blood, any card in your entire deck can suddenly appear atop it. Black’s master tutor spell lives up to its billing because it’s in the color most ready to do anything to win.

Black mana values power above all. Demons, Vampires, and Zombies do not care about your codes or morals, they want to feast. Black carries the capacity to do everything you want, but always for a price. Paying with life and creature sacrifice makes it the most versatile color. Vampiric Tutor gives every MTG player a singular moment of zen: choose whatever you desire. 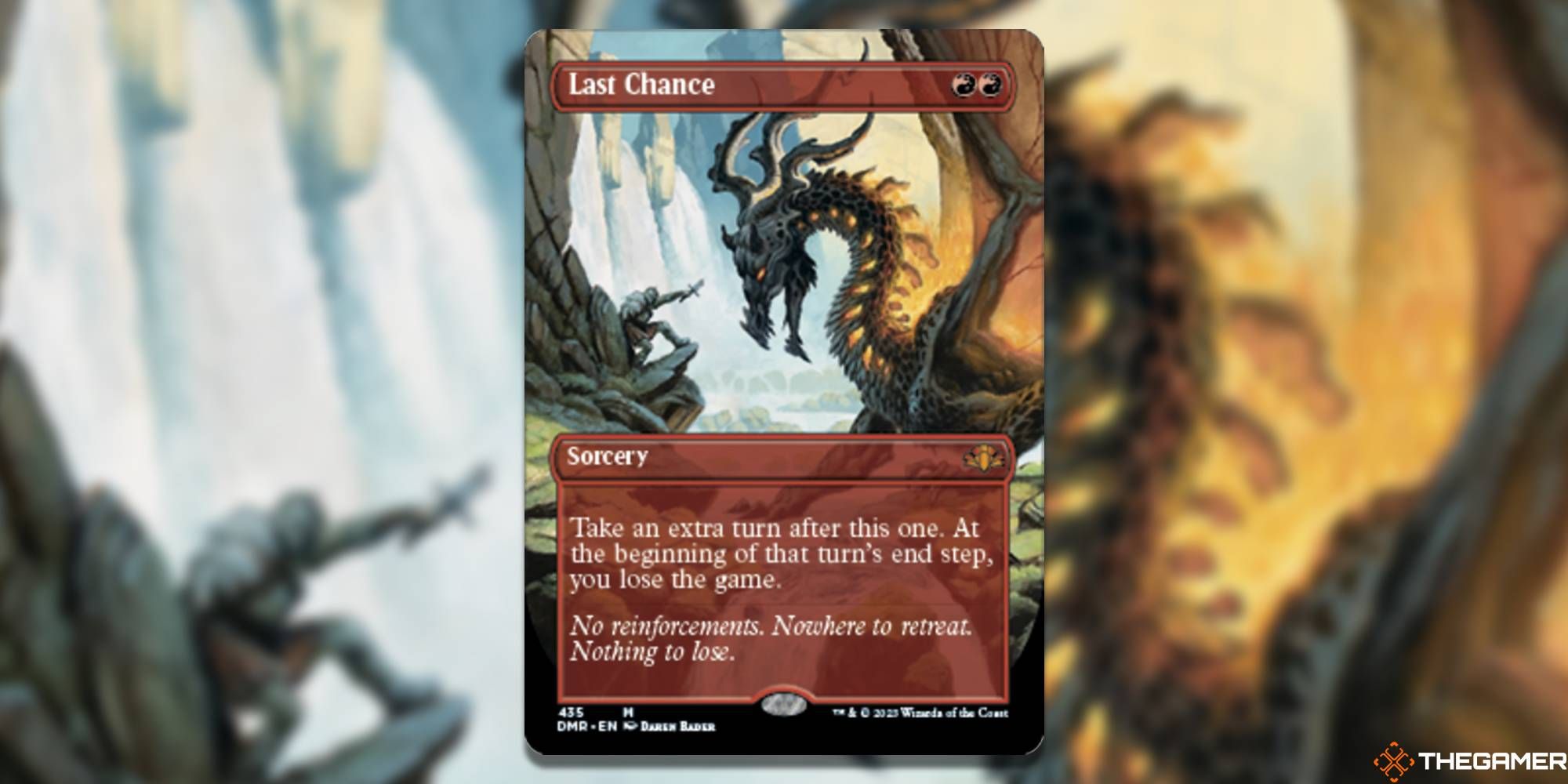 Last Chance is one of red’s more powerful game-warping sorceries. As a bizarro twin of blue’s Time Walk (the forever-banned but still GOAT sorcery?), this red spell gifts you with an extra turn for only two red. The catch makes it considerably less broken however: you will lose the game at the end of that extra turn.

Casting Last Chance starts a clock and a red player has their work cut out. In the hands of a smart player with a full grip of burn spells, victory is likely to arrive. The sheer cheapness of this spell makes it mythic, as you can use most of that initial non-extra turn to dish out damage in preparation for your Last Chance. 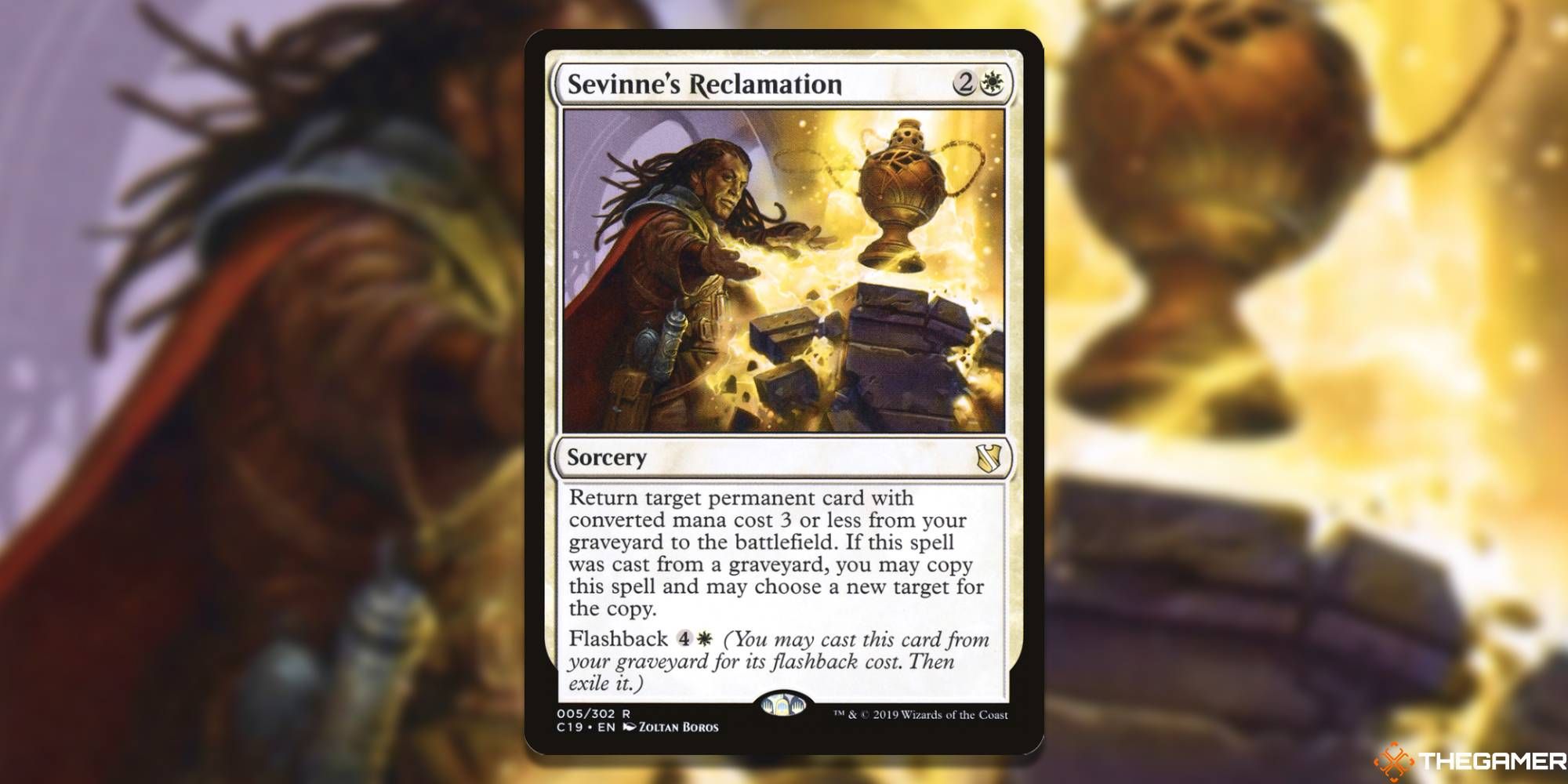 Sevinne’s Reclamation features a rare character, an adventurous “Chronarch” — or Time Mage — from Dominaria. The deliciously-titled planeswalker card Sevinne, the Chronoclasm gives Jeskai (blue/red/white) a copy for every flashback and graveyard-returning instant or sorcery.

​​​​Sevinne’s Reclamation lives up to his lore. This white sorcery for three gives players an efficient way to return any small permanent from the graveyard. Flashback for only five and you can do it again, now twice! Incredible value for a card that is both inexpensive and explosive when played in the right deck. 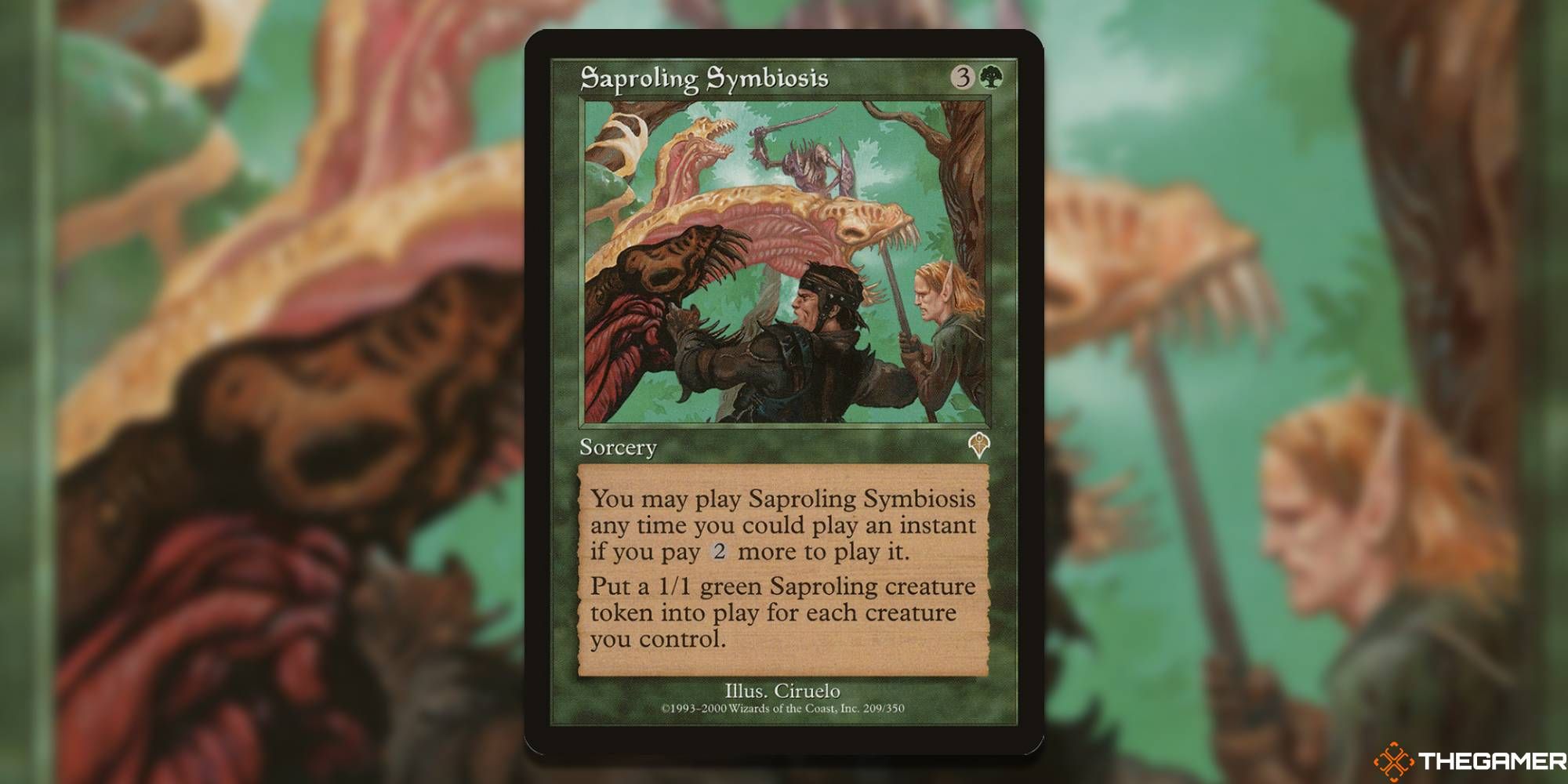 The alliteratively-named Saproling Symbiosis rolls off the tongue, and it will instantly double your army in green. Mass token decks favor this card, or mass “enter the battlefield” triggers for creatures, or mass sacrifice plays.

Saproling Symbiosis’ casting flexibility is rather rare: a hybrid sorcery and instant, if you are willing to pay two extra. At a total of six mana, an instantaneous doubling of your creature count — at the perfectly strategic moment — can easily win your game when combat next arrives. Also, note the strange majesty of the Invasion-era Saproling. Closer to something Phyrexian than just a 1/1 Forest Critter. Yikes. 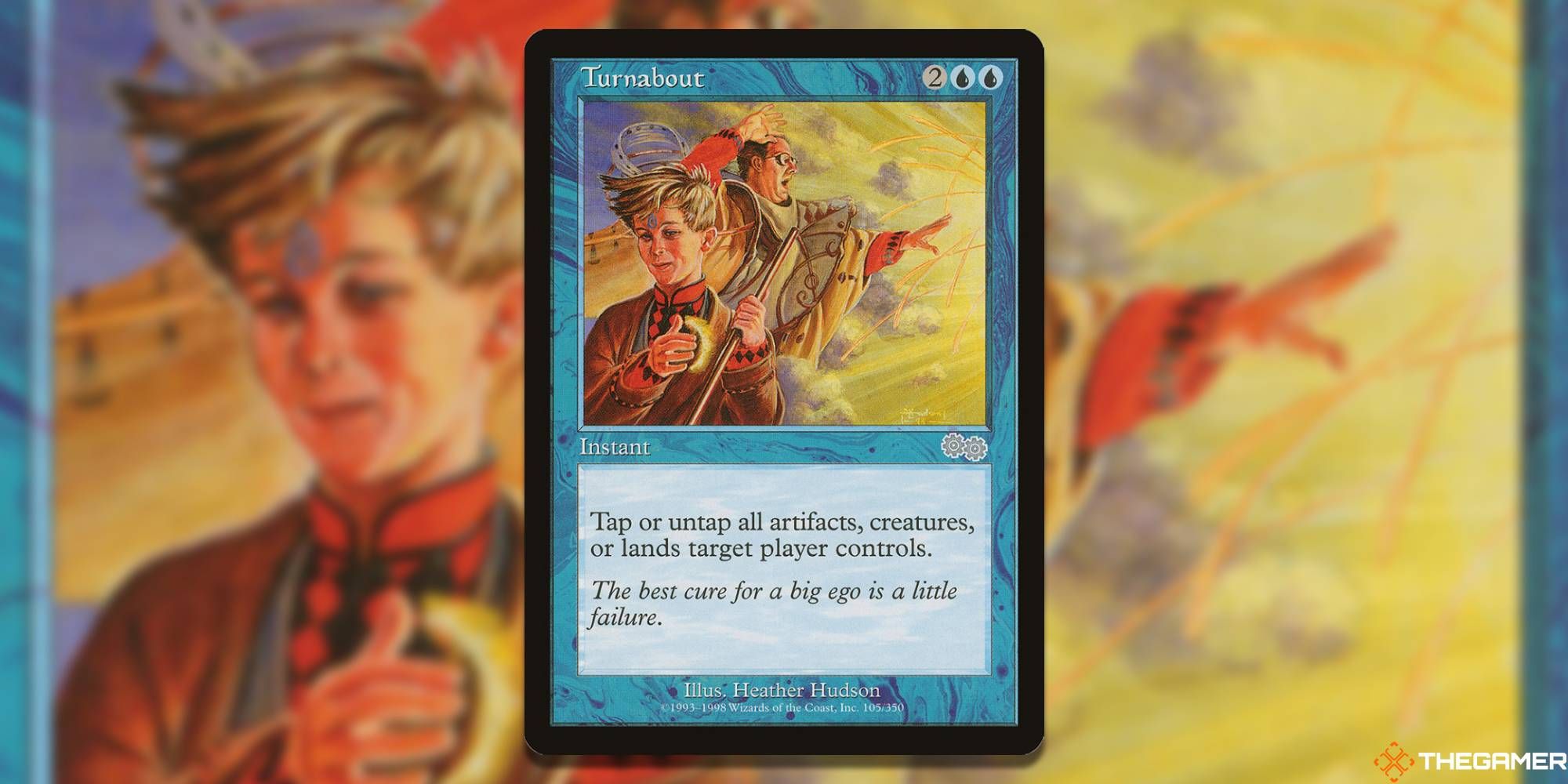 Turnabout is the reason why your opposing blue player can’t keep their poker face. It’s a full reversal instant with a mightily versatile effect, for any “target player.” Reset your own mana for a bevy of fresh spells, or shut down your opponent’s blockers for a finishing alpha strike (all-out attack). Turnabout upends the entire game in a flash.

Enlightening flavor text marks this card as a certified classic in blue. Fit for practically any deck, you can turn the battlefield upside down at four mana. Heather Hudson’s bright, story-rich art depicts a gratifying reaction meme for the two players on opposite sides of the big turn. 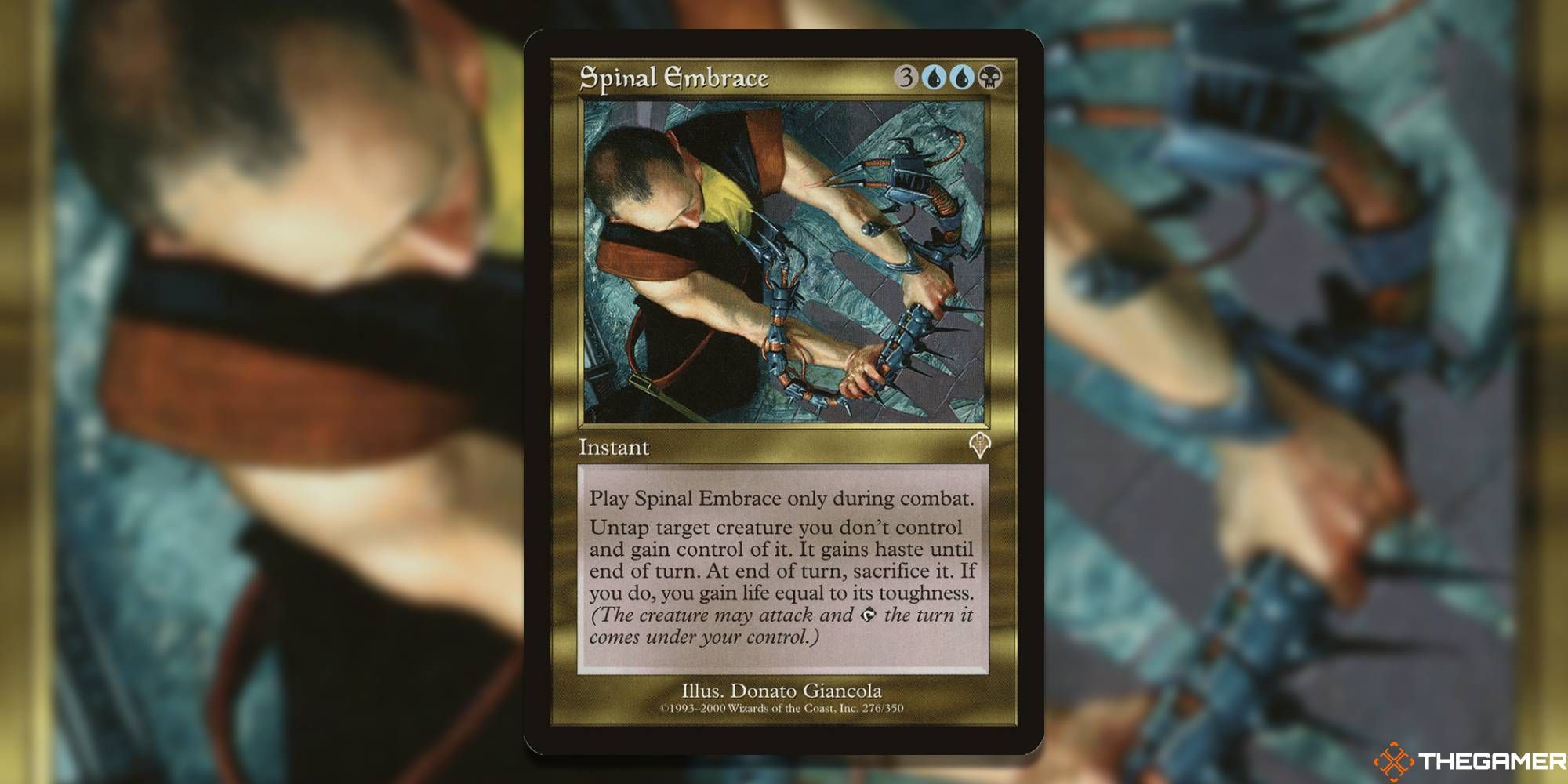 When blue and black combine (Dimir), truly nasty effects are in store for your opposition. The devilish Spinal Embrace steals a creature in the midst of combat, on offense or defense, and then drains their spinal fluid at end of turn. The bigger the creature, the more damage you can deal on its last attack, and the more life you gain when you absorb its nutrients upon sacrifice.

Spinal Embrace is a game-winner against decks that send behemoths your way. It’s part of a canon of Dimir spells that steal permanents and search opposing libraries for cards to exile, even enabling them to cast for your own designs! Dimir players rejoice in devouring their opponent’s best cards. 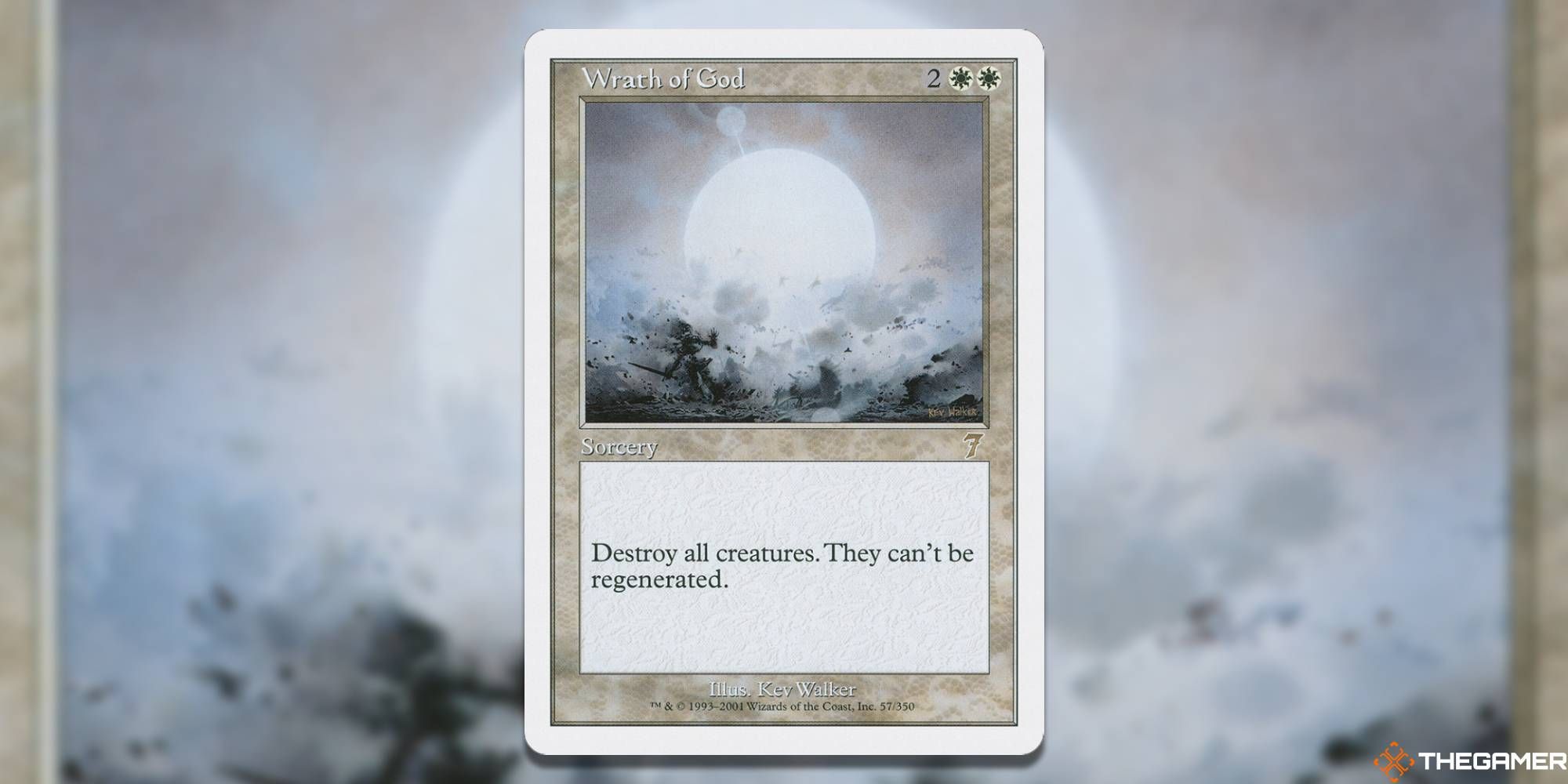 What a sight! Kev Walker’s art for MTG’s thermonuclear detonation is transcendent. Wrath of God is one the game’s original board clears, or “destroy all” effects.

This white sorcery for four is perfect for the control player that needs to eliminate threats as efficiently as possible. Magic’s card complexity invites many strategies that use creatures sparingly or not at all. Thus, Wrath of God becomes a key way to defeat the decks that do. Simple, beautiful, devastating. Needless to say, no one ever wants to invoke the wrath of God. 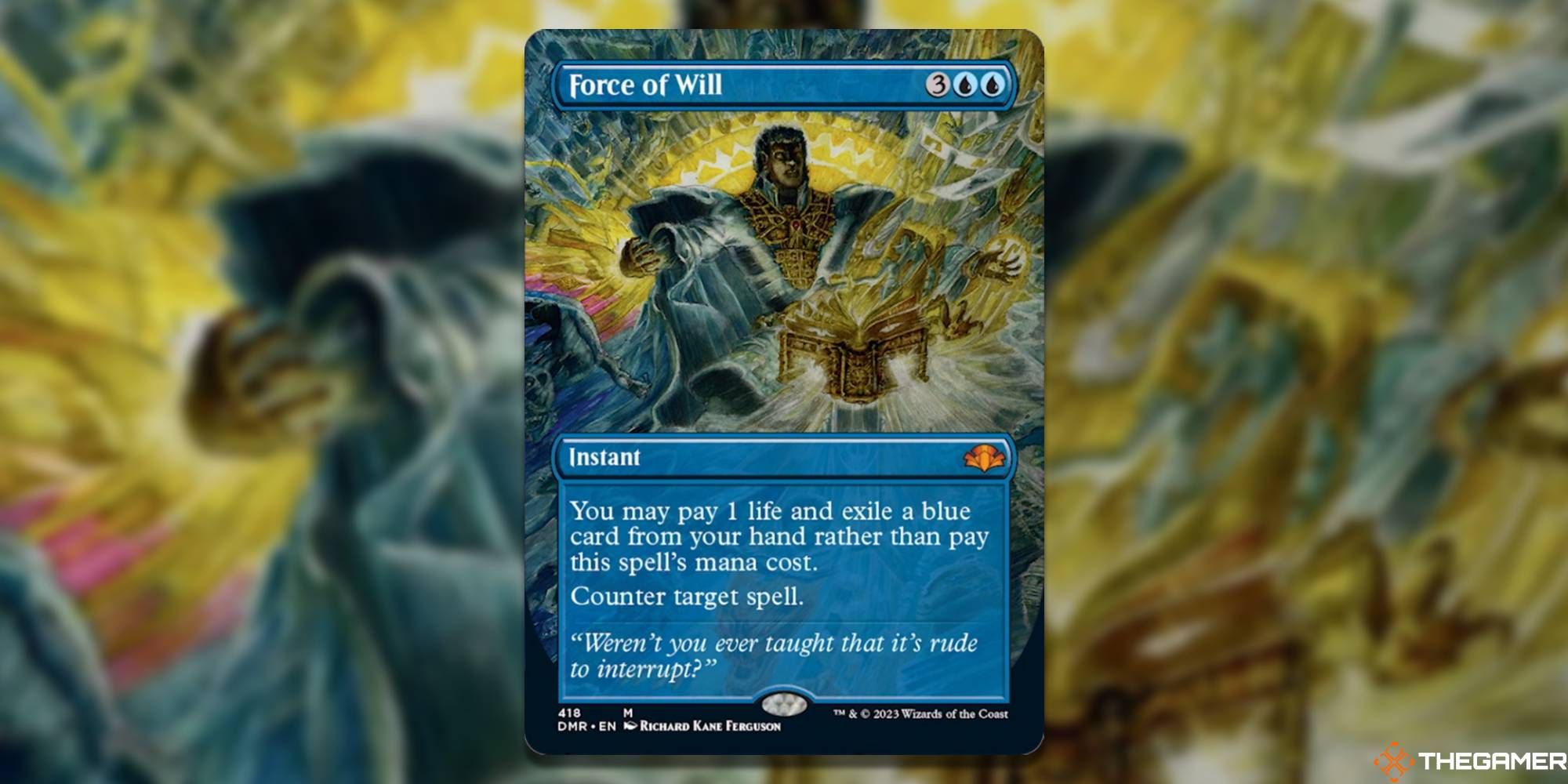 Force of Will is one of blue’s strongest weapons. Instants are the chosen weaponry for the sea and sky and this is best in class for one simple reason: alternative casting cost.

Force of Will lets a blue player completely tap out and yet still have a counterspell ready for the cost of just one life and one card. The legendary instant’s standard mana cost should practically never be used, and there are many cheaper hard counters (such as the original Counterspell, which is also in this set). But Force of Will is better than most, if not all, for its zero mana playability. It’s the card for showcasing how blue is always ready for anything.