You are here:
Home / Magic The Gathering Commander Deck Brew: Put The Table To Sleep With Timin, Youthful Geist And Rhoda, Geist Avenger

On Magic the Gathering's plane of Innistrad, a quiet death is all anyone can hope for. The Blessed Sleep is a key part of the humans' belief: the hope that, when you die, you're not brought back a zombie, stitched into a Skaab, or become one of the many spirits haunting the plane.

Of course, very few on Innistrad are that lucky. But one spirit did find life after their death more appealing, as they managed to form a friendly relationship with the still-very-much-alive Cathar, Rhoda. Now, Timin and Rhoda patrol Innistrad, helping both the living and the dead where they can, and pursue Timin's killer.

This week, we're going to give our opponents the Blessed Sleep they so deserve with Rhoda, Geist Avenger and Timin, Youthful Geist. 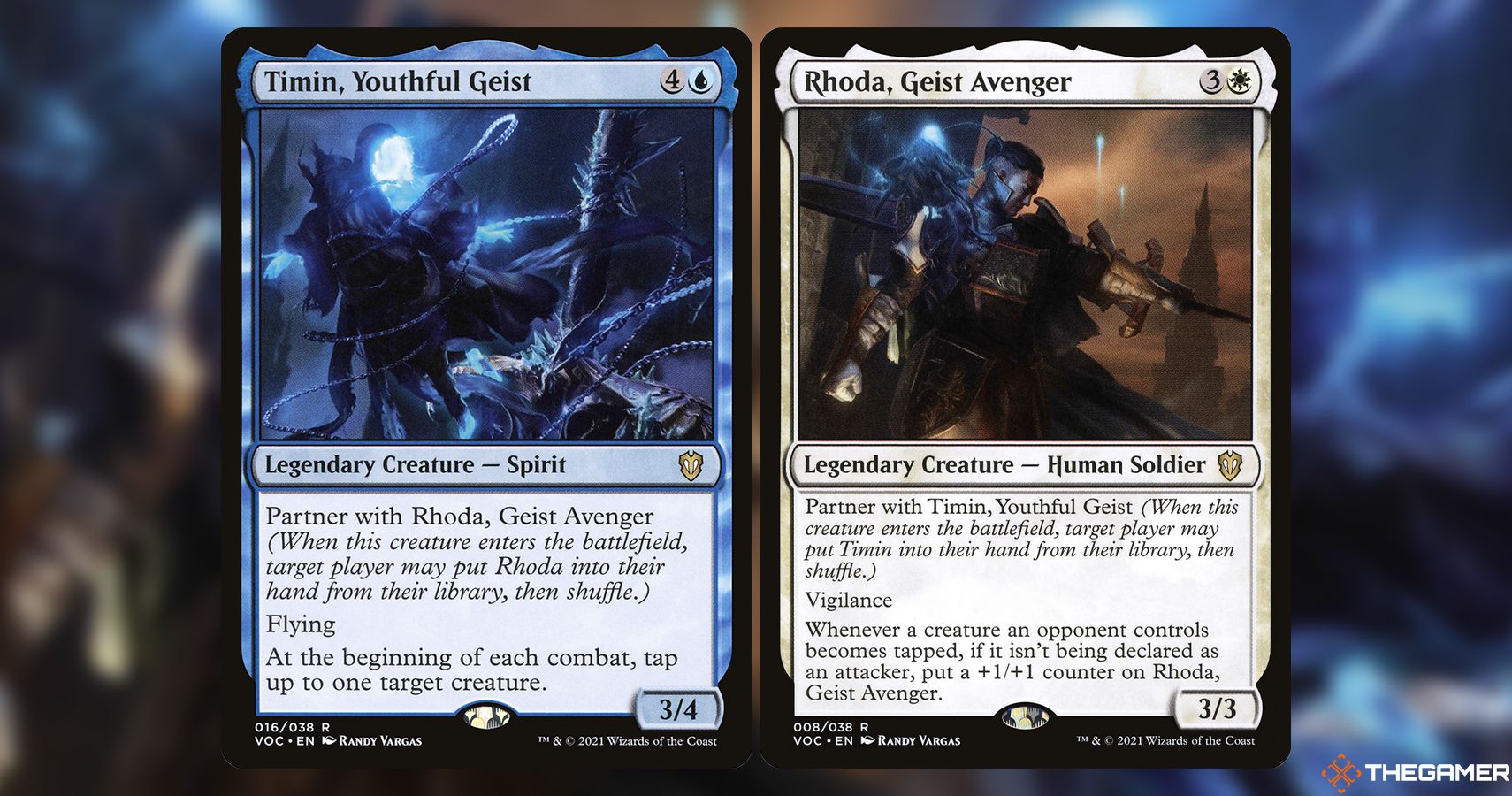 Out first Commander is Timin, Youthful Geist. A 3/4 Spirit with flying that costs four generic and one blue, Timin taps down one target creature at the beginning of each combat. He also has Partner With, a mechanic which allows him to be one of two Commanders alongside Rhoda, Geist Avenger.

Rhoda, Geist Avenger is a 3/3 Human Soldier with Vigilance that costs three generic and one blue. Rhoda's ability fits nicely with Timin's as whenever an opponent's creature is tapped for any reason otherthan attacking, you put a +1/+1 counter on Rhoda.

The plan here is to repeatedly tap our opponent's creatures, build Rhoda up nice and big, and then smash them all in the face with a gigantic Cathar. Timin's here too, of course, to give us the blue of this deck's Azorius colour identity. 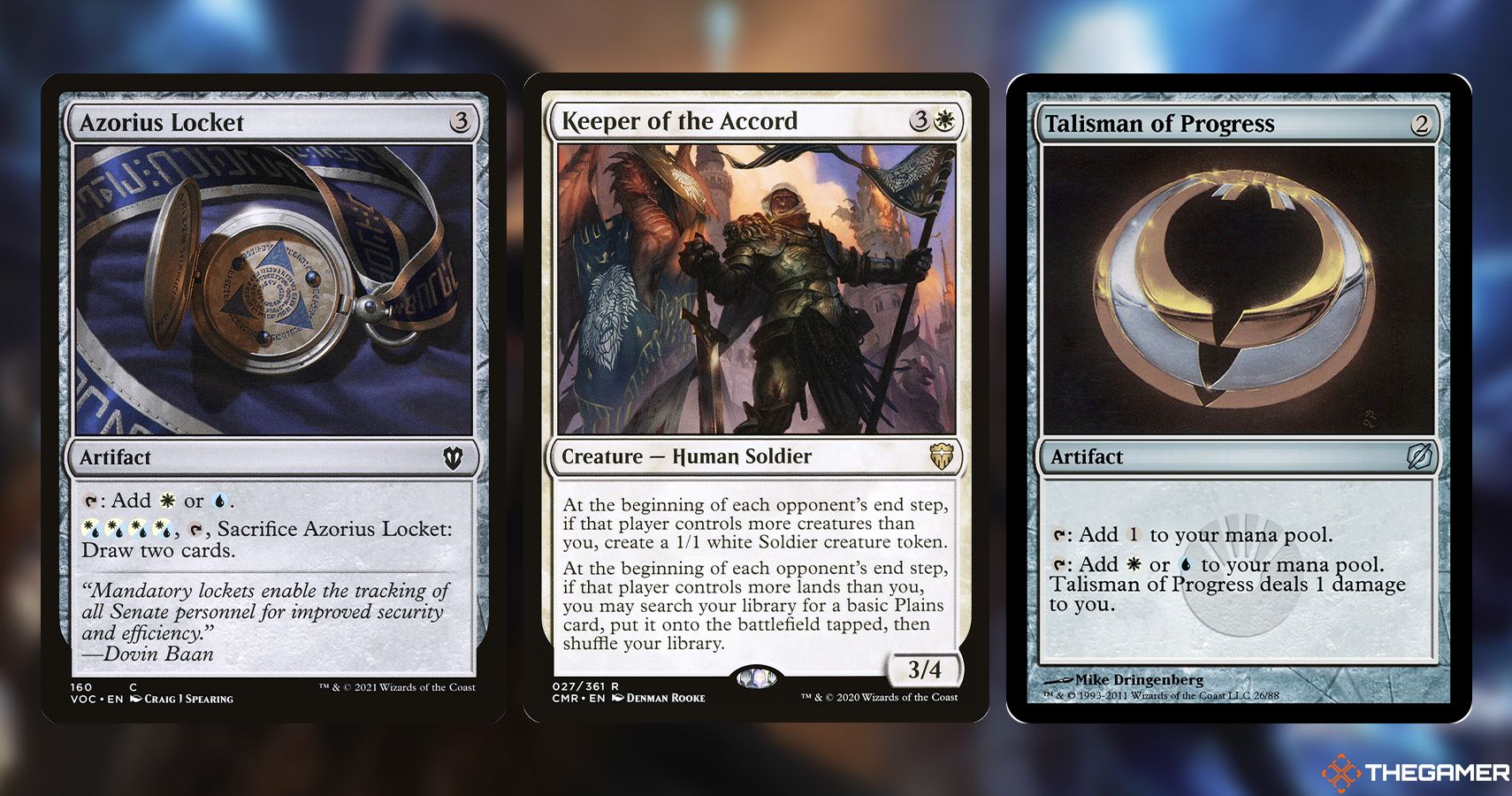 Ramping in Azorius can be tricky because blue doesn't have any meaningful ramp of its own, and white is only just starting to get tools to do it. But there are ways.

First, for mana rocks, we're going with Azorius Locket, Azorius Signet, and Talisman of Progress. All three of them can produce white or blue mana, and putting all three in feels like a nice change from the usual Sol Ring and Arcane Signet we rush to put into these decks. We've also got Thought Vessel in here, but that's more for the massive amounts of card draw we're hoping to do than for its mana-producing capabilities.

We're also using some white ramp staples, like Archaeomancer's Map and Keeper of the Accord. The latter lets us put a land from our hand onto the battlefield whenever someone players more land than us, and the latter lets us search our library for a Plains if another player controls more lands than us at the end of their turn. Keeper of the Accord also gives us a lot of chump blockers if someone else controls more creatures, which will be handy here. 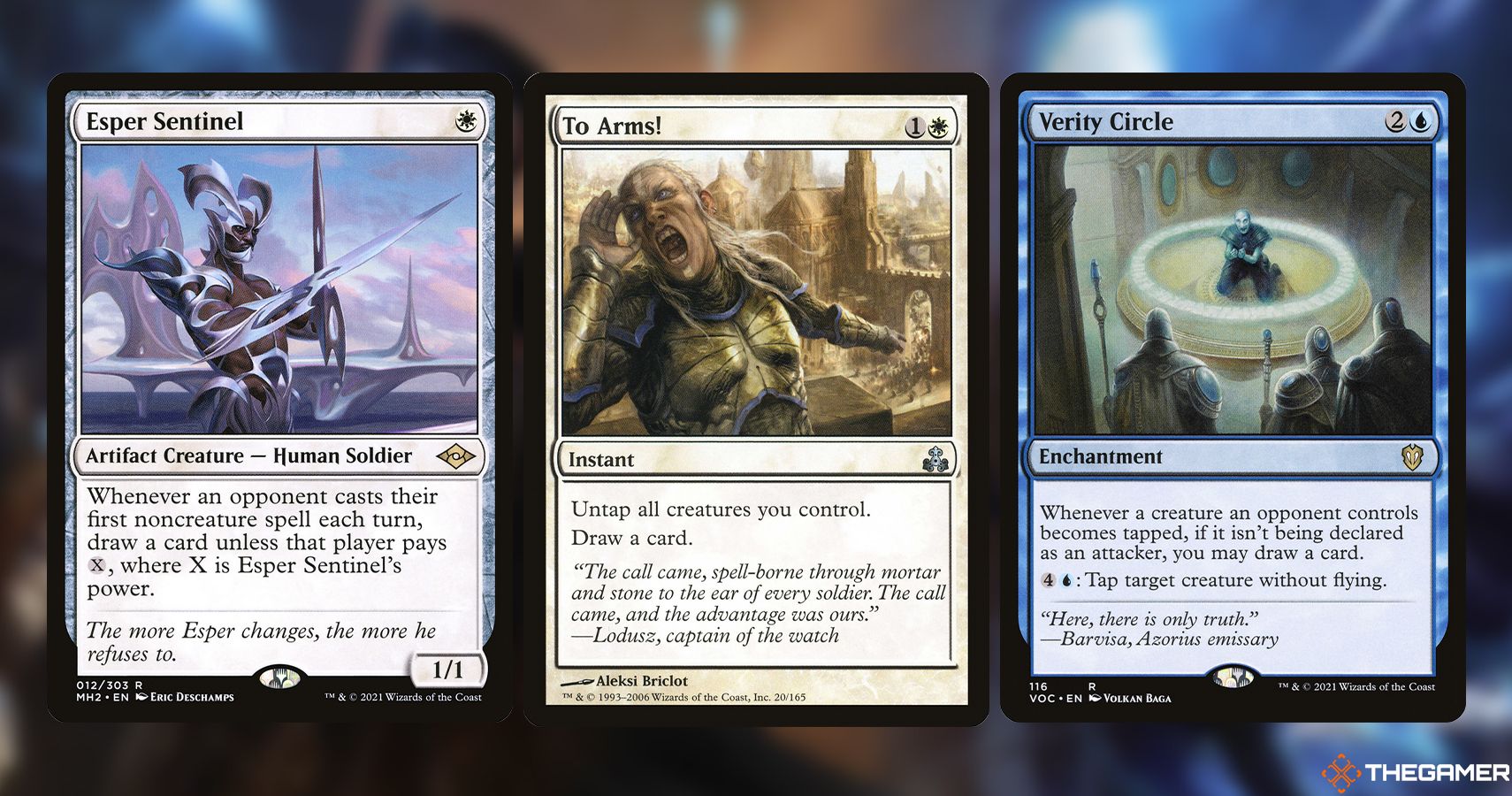 Esper Sentinel works in any white deck, and with the ability to bump it up through The Ozolith and some Rhoda trickery, it could become a big enough problem that your opponents never pay for it.

The most significant draw outlet in this deck, though, is Verity Circle. An enchantment that costs two generic and a blue, Verity Circle lets you draw a card whenever a creature an opponent controls becomes tapped for any reason other than attacking – the same trigger as Rhoda. Considering we're going to be tapping down entire tables of creatures sometimes, that could result in a ridiculous amount of card draw (which is why we're running Reliquary Tower and Thought Vessel).

We have some smaller draw cards as well. To Arms! lets you untap all of your creatures and draw a card, which as an instant that only costs one generic and one white mana is very nice. Azorius Locket can be sacrificed to draw two cards, and Cryptic Command can draw a card – although that's probably the worst option on the card.

Give Your Opponents Creatures 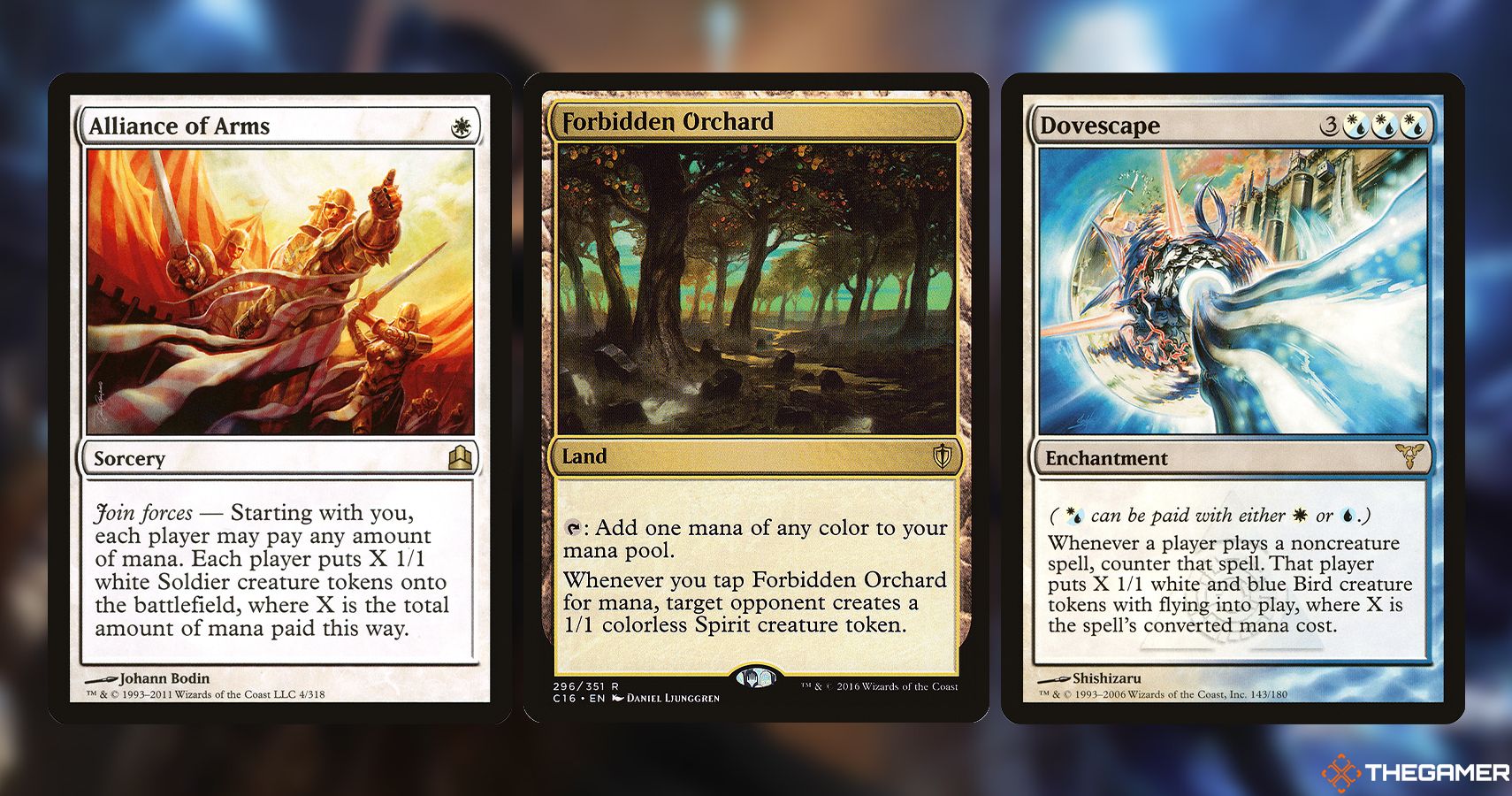 Wait, what? Why are we giving our opponents creatures to attack us with? Simple: the more creatures they control, the more we can tap down, and the bigger Rhoda gets. If you've got a table full of players playing low-creature-count decks Rhoda is really going to struggle, so giving your opponents something to tap can speed things up.

Akroan Horse can give you and two other opponents a horse creature token at the beginning of the third opponent's upkeep, which is cool. There's also Alliance of Arms, which lets the table pay as much mana as they want into the spell for everyone to make the total amount of 1/1 Soldier sreature tokens. So if the table collectively pays 50 mana, everybody makes 50 soldiers.

Probably the nastiest and most volatile card in this deck is Dovescape. It could easily backfire, but you could make it work for you with some careful counterspell use. Dovescape automatically counters any player's noncreature spells and gives them the spell's mana value in white and blue Bird creature tokens.

This effectively locks up the game if nobody has a way to counter a triggered ability, but it also produces a massive amount of bird tokens ready for you to tap. To get around it, we have got both Disallow and Tale's End to counter Dovescape's triggered ability should you need to continue with your game plan.

Giving your opponents things to hit with you with is a risky move, so make sure you've got a Propaganda, Ghostly Prison, Norn's Annex, Mirrormade, and Archon of Absolution ready to prevent your opponents from attacking you. Meanwhile, Palliation Accord gives you counters whenever an opponent's creature is tapped, and they can be sacrificed to prevent one damage each. It's an Azorius deck, of course we're pillowforting! 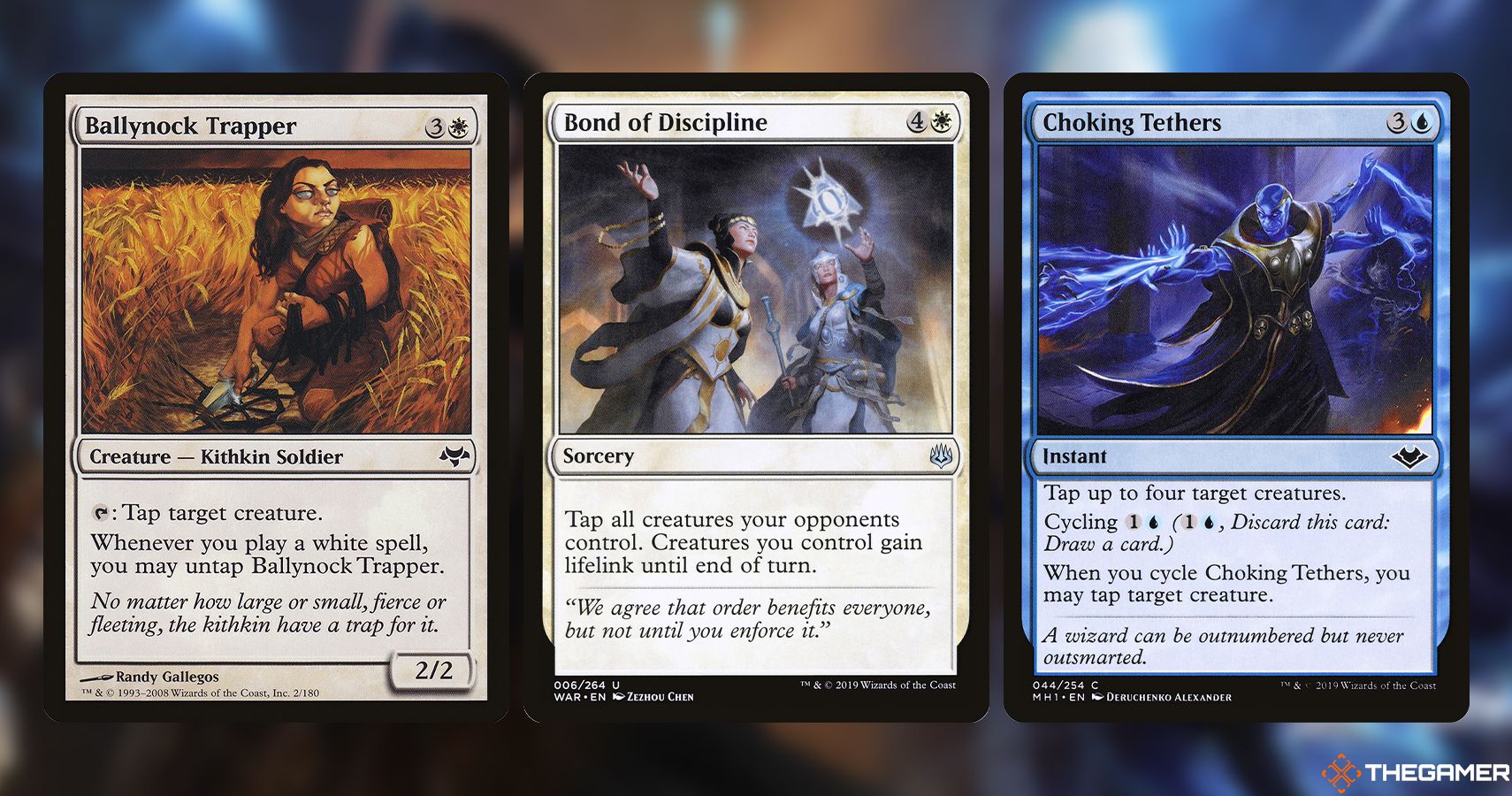 We've given the table a load of creatures, but now it's time to get to the hard work of tapping them and making Rhoda a big, beefy soldier.

First, the smaller tap methods. Ballynock Trapper can tap itself to tap another creature, but it also untaps whenever you play a white spell toa llow you to take out at least a few a turn. Court Street Denizen is also good, as it taps a creature whenever a white creature enters under your control (combine this with Dovescape and it could be locking down the entire board. Ojutai Exemplars does something similar, tapping a creature whenever you play a noncreature spell.

Choking Tethers, Downpour, Citadel Siege and Dreamshackle Geist all also give us the ability to tap a few creatures at once. Though these are considered the "small" cards, don't sleep on them. For instance, Choking Tethers taps four creatures, putting four +1/+1 counters on Rhoda and letting Verity Circle draw you four cards.

But why only tap a few when you could tap all of them at once? This are our win conditions, and all they need is a big enough board state with lots of creatures.

Cryptic Command, an overloaded Blustersquall, Aether Shockwave, Deluge, Ensnare, Gridlock, Icy Blast, Thoughtweft Gambit, Blinding Light, Sleep, and Bond of Discipline can all tap either one or all of your opponents' creatures in one fell swoop. Keep in mind that, unlike a lot of cards from Crimson Vow, Rhoda doesn't say the ability triggers once per turn, meaning every single creature that gets tapped down with one of these is a +1/+1 counter.

That is a lot of cards that can be win conditions in their own regard, but to really ensure we're taking players out with Rhoda, we want to also untap their creatures… just do re-tap them immediately. For that, we've got Intruder Alarm, which prevents creatures from untapping in their controller's untap step, but does untap every creature enters the battlefield under anybody's control.

Tap down the table with a Blinding Light, then Forbidden Orchard to give someone a spirit, which then untaps all the creatures, and then tap them a Sleep again. It's evil and is a great way of building up Rhoda incredibly quickly. 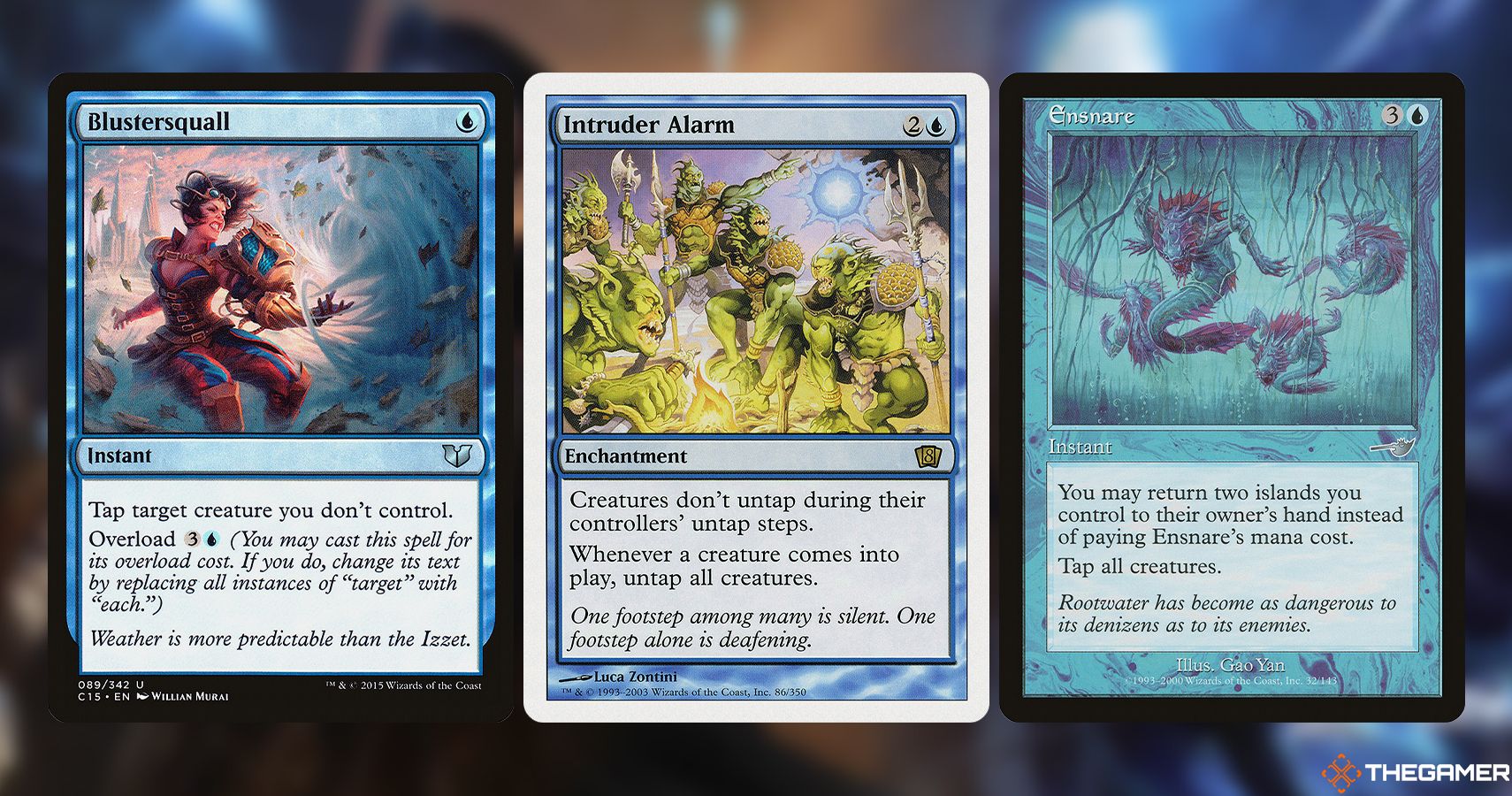 The beauty of this deck is that the win condition isn't a single card we're digging for to win, it's an inherent part of the deck. Rhoda can knock someone out with Commander damage as long as you can tap enough creatures down. Keeping yourself protected by keeping opponents' creatures tapped and using the pillowfort pieces like Ghostly Prison and Propaganda also gives you time to work your way around the table unhindered.

As long as you have one of the "tap all creatures" cards, like Bond of Discipline or Blustersquall, you can get the win in a fairly straightforward fashion. However, it isn't the only way of winning.

We're getting a lot of creatures through things like Akroan Horse and Dovescape, so build up your board state with tokens before dropping a simple Akroma's Will, and you've got an army that can wipe out the entire game in one attack.

Powering The Deck Down 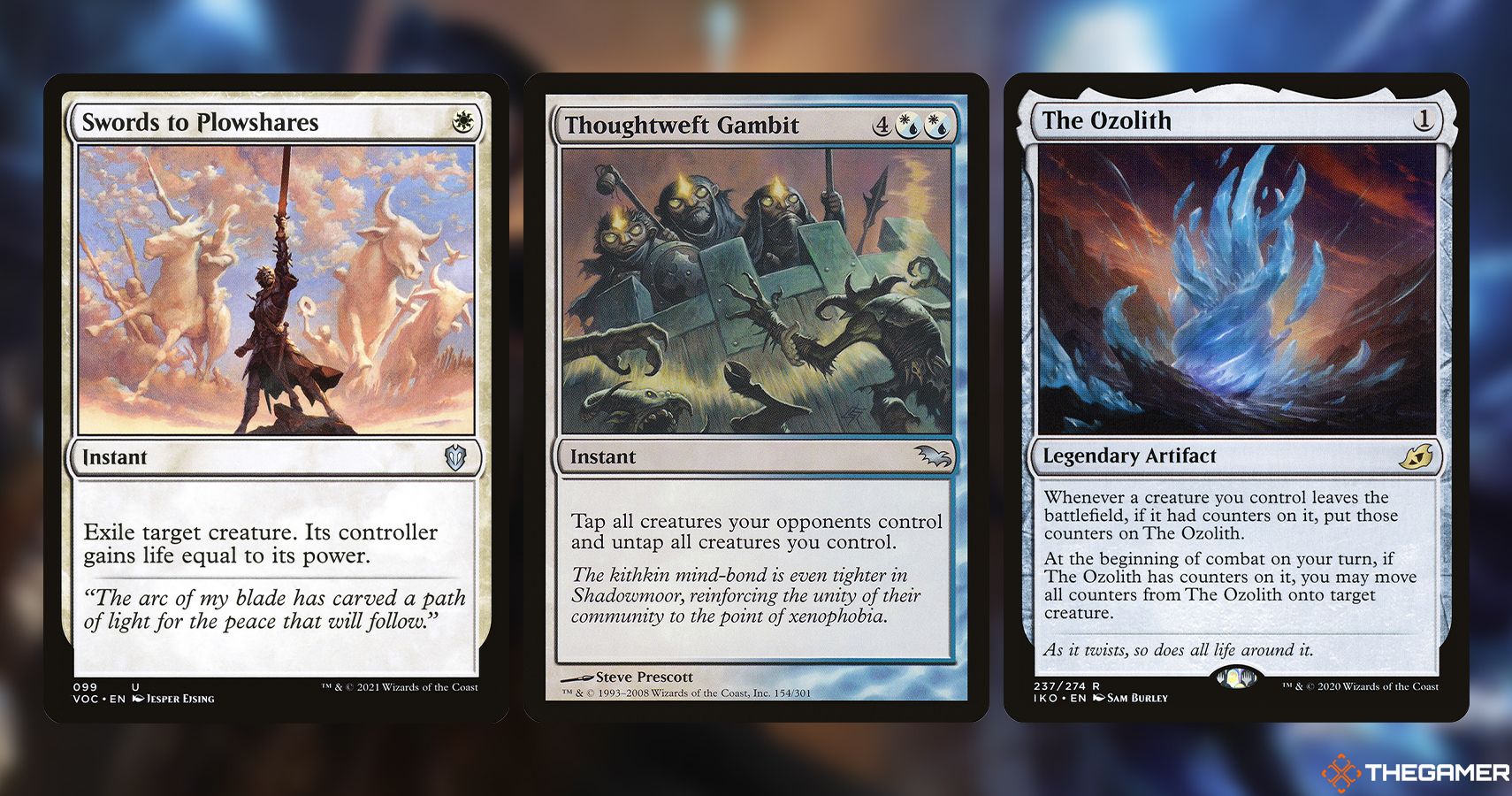 If you want to lower the power of this deck for your playgroup, there are a number of ways to go about it.

We have got a fair few best-in-slot cards you could replace, like Swords to Plowshares, Mana Drain, and Pact of Negation. Swapping them out with less powerful alternatives (like Angelic Ascension, Muddle the Mixture, and Forceful Denial) can go a long way to reducing how interactive and controlling your strategy can be.

You may also want to reduce some of the redundancy in the win conditions. We have a lot of cards that tap every creature, and any one of them can lead to a win. Bringing that right down to just two or three, and swapping the rest with things that only tap a handful of creatures, means you'll have to work more for your win and give your opponents the chance to stop you.

As always with any deck that uses +1/+1 counters, The Ozolith is another key card to take out. Artifact removal is less common at slower tables, and removing it makes removing Rhoda a feasible way of stopping you from smashing the game too soon.

For more information this deck, remember to check its Moxfield page.