Alchemy has just received its first banned card. Rather than alter the text on Grinning Ignus, Wizards of the Coast decided that the best solution was to simply get rid of the offending elemental from Alchemy altogether.

"One of Alchemy's guiding lights is to keep the format fast, fun, and dynamic," wrote senior designer Donald Smith in the ban announcement. "While combo decks can be a fun and healthy part of metagames, this deck fell outside these format goals. We discussed rebalancing (and may do so at a future date), but each change we've considered so far would effectively eliminate this combo, so we've decided to ban the card instead."

Grinning Ignus combos with quite a few cards, but in the current Standard environment it’s most often paired with Racketeer Boss. This covers the cost of Grinning Ignus’ activation and enables the player to recast Grinning Ignus as often as they’d like. Add in Prosperous Innkeeper for infinite life, and then throw in either Voice of the Blessed or Trelasarra for an infinitely powerful creature. Add in Birgi, God of Storytelling, and you’ve got infinite mana, too. 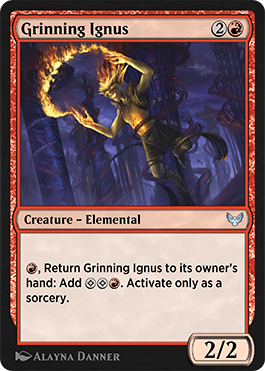 Being Magic Arena’s digital format, normally Wizards would simply adjust Grinning Ignus in some way rather than ban it, but it seems that Wizard’s internal playtesting revealed all changes just kill the card and the deck it enables, so the simplest solution for now is to just ban Grinning Ignus.

The ban goes into effect July 7, alongside several card adjustments. Cauldron Familiar will lose the ability to block, Dragon's Rage Channeler loses its toughness bump, and Winota, Joiner of Forces gets unbanned in Historic after a slight tweak to the card text. You can read all about it in today’s Alchemy rebalancing on the official Magic: The Gathering website.

If you're a control player and you're looking for a great time waster, Counterspell Guesser is the game for you. It tasks you with matching the art to the hundreds of different counterspells in Magic: The Gathering, and believe it or not, they're not all blue.