You are here:
Home / Magic: The Gathering – 10 Best Cards With Surveil

Traditionally found on blue and black cards, surveil is a powerful keyword ability in Magic: the Gathering. You can smooth your draws out by looking at the next card of your library, pitching it to your graveyard if you don’t like it, or keeping it on top for your next draw step. You can also fuel your graveyard strategies by loading up your graveyard with all sorts of spicy reanimation targets, or for your other deck synergies.

When a card lets you surveil, there will be a number following the keyword that references the number of cards you can look at with your surveil ability, kind of like scrying. Some surveil cards are better than others, though, and these are some of the best Magic has to offer. 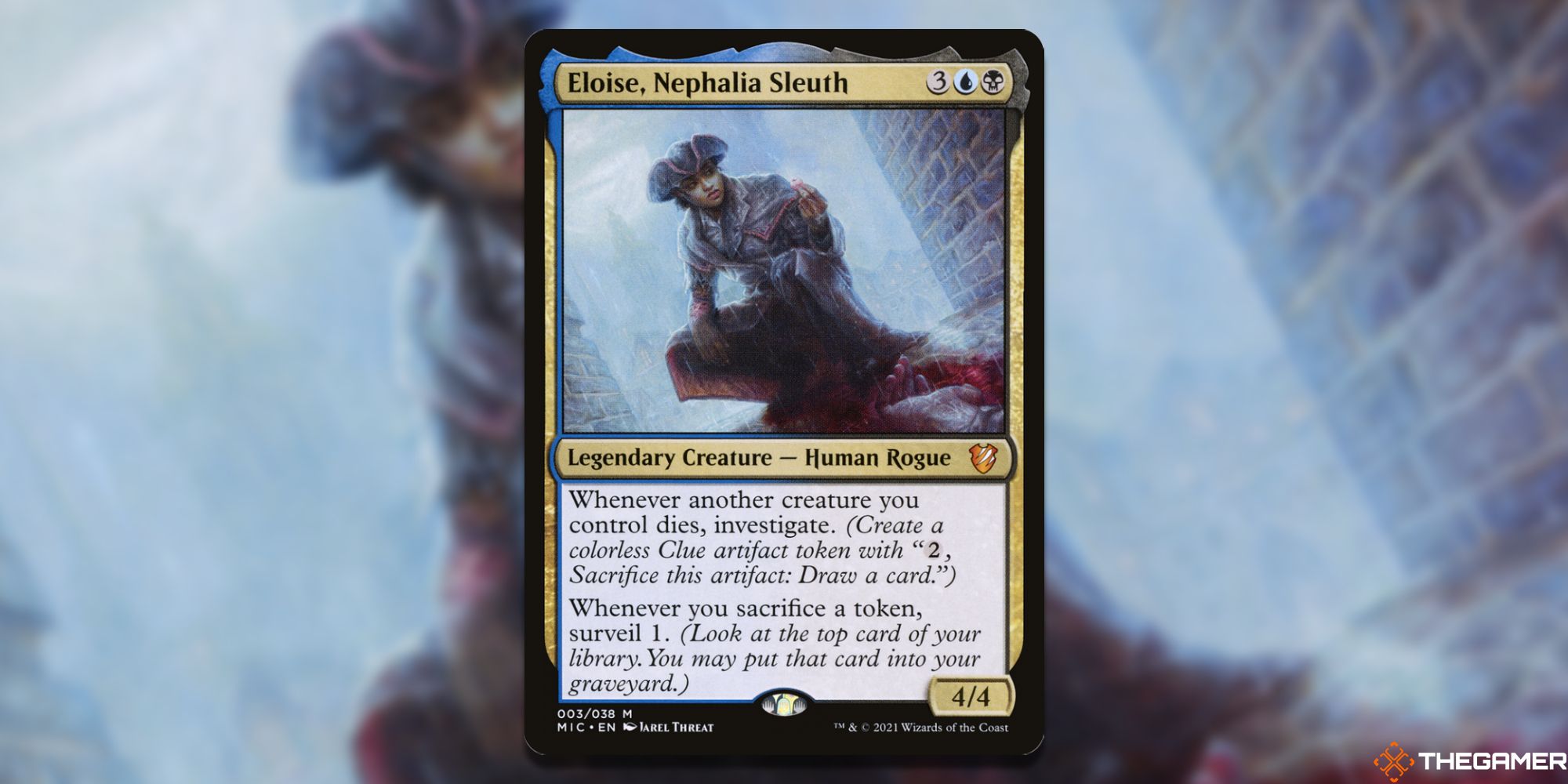 This spicy commander lets you chain sacrifice triggers to investigate and surveil to your heart’s content. With enough creatures, and perhaps a sacrifice outlet like Ashnod’s Altar, you’ll have all sorts of tokens entering and leaving the battlefield.

Toss in a card with an effect that triggers when a creature dies, like Blood Artist, and you’ll be drawing cards, dealing damage, and surveilling all for maximum value. 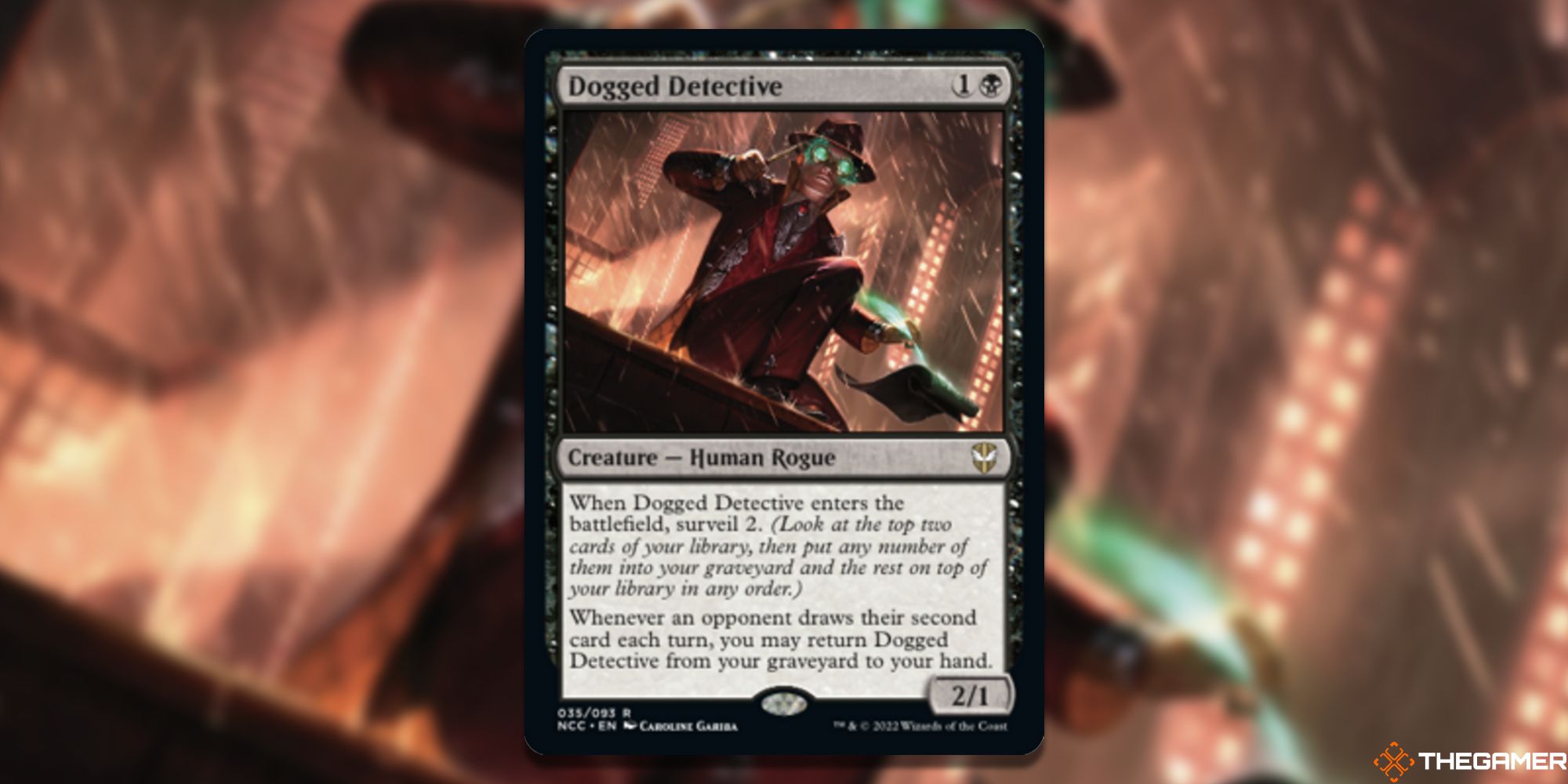 Dogged Detective is a hard-boiled creature and an extremely efficient card. For just two mana you get to surveil 2 when it enters the battlefield, and you also have a 2/1 creature to smack your opponent around with. Once Dogged Detective is in your graveyard, you can return it to your hand when an opponent draws their second card each turn.

Being able to reliably return Dogged Detective back to your hand is great, especially in the Commander format where you generally have three opponents, giving you three turns to see if you can return it back to your hand. 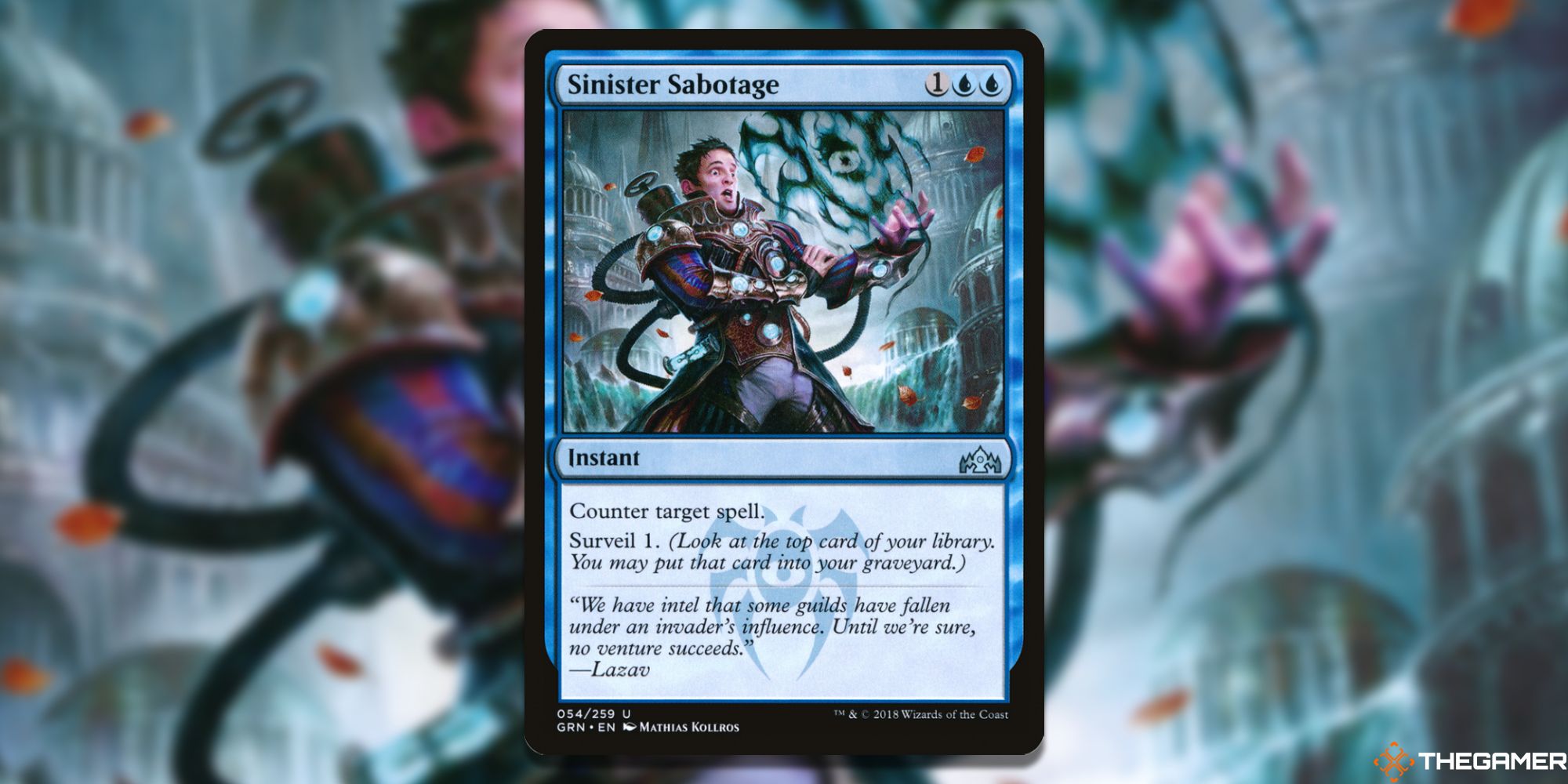 Three mana for a counterspell is pretty standard in Magic. Tacking on a keyword typically makes it pretty good, and surveil is no exception.

For control style decks, you get to disrupt whatever plans your opponent was depending on and as a bonus, you can make sure your next draw can also ruin their next play. While not the best counterspell, Sinister Sabotage is strictly better than others. 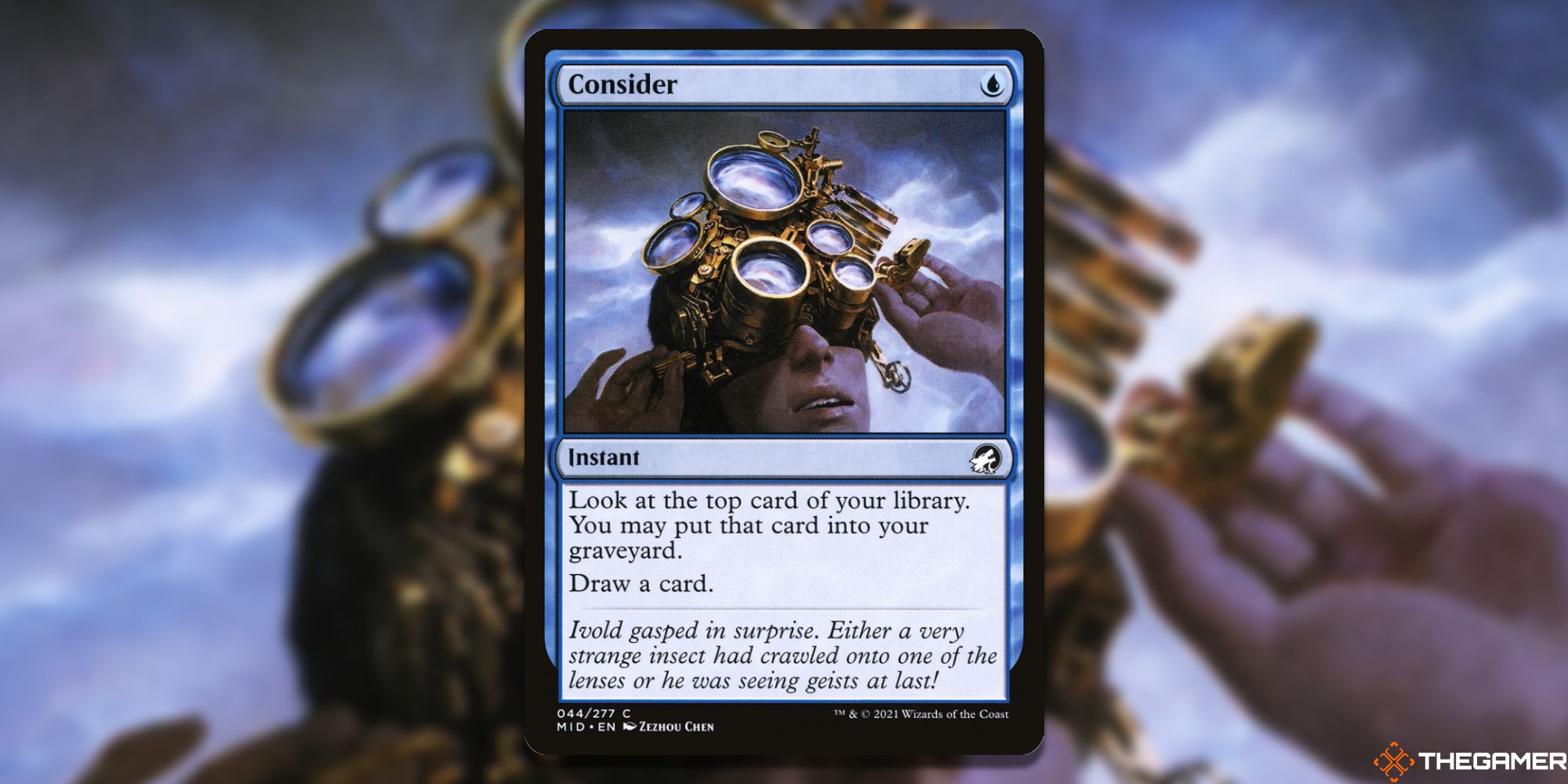 Drawing a card for one mana is pretty good, and being able to control what that draw is to a certain amount is great. Being able to do it at instant speed is even better, as you'll be able to keep mana open for either a counterspell or Consider to draw a card right before your next turn.

Consider shines in combo and control decks, particularly in Legacy where it stands alongside other draw spells like Preordain and Ponder. 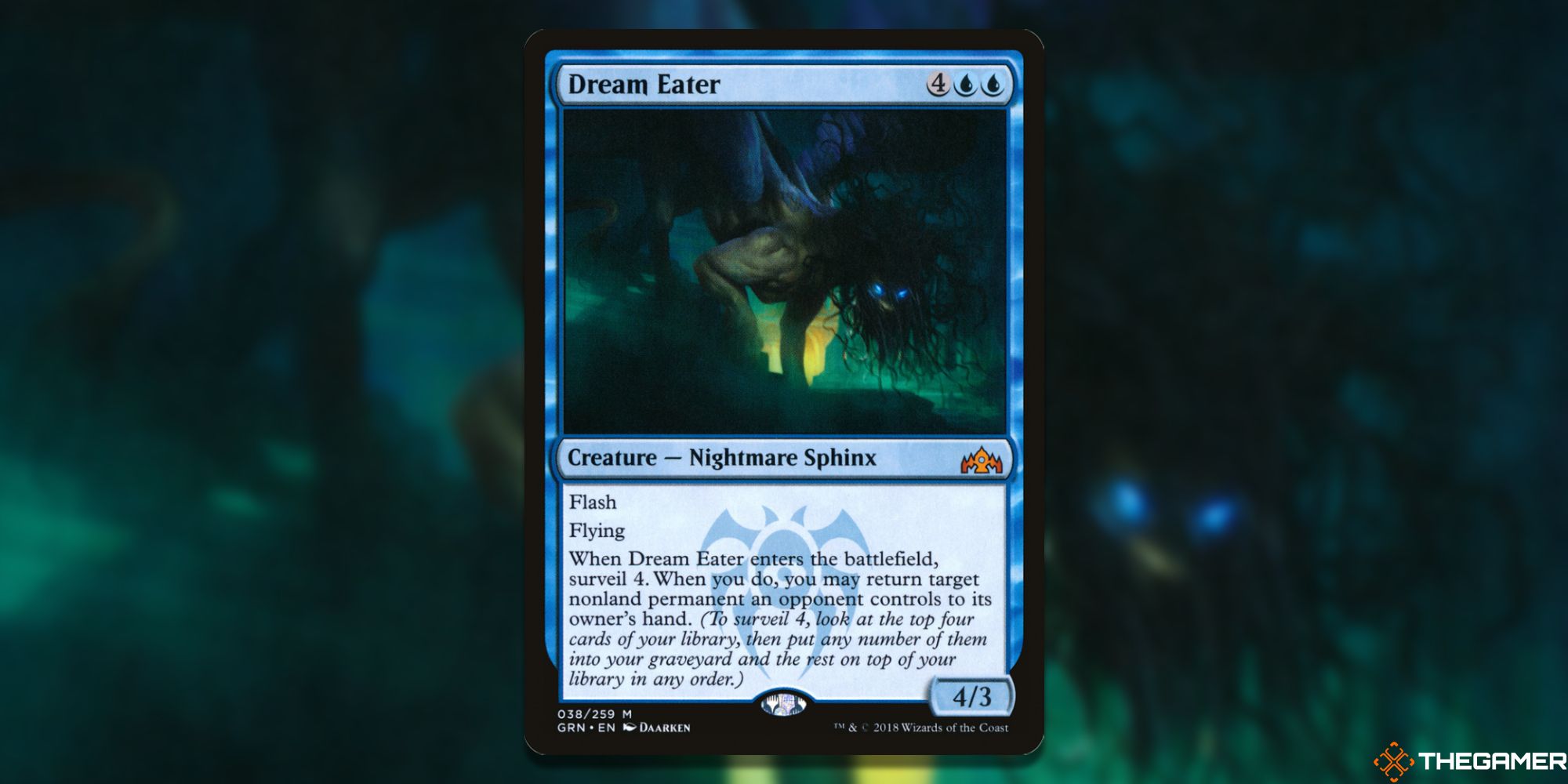 This mythic Nightmare Sphinx isn’t the biggest blue top-end creature to grace blue control decks, but it stands out for other reasons. With surveil 4, it has one of the highest surveil counts in the game. Along with surveil 4, Dream Eater has flash and flying, allowing you to cast it at instant speed and giving it some evasion so it can attack freely.

Digging four cards deep into your deck gives you the potential to go through five cards to find an answer by the time your next draw step comes around. When you do surveil with Dream Eater you can bounce a nonland card back to an opponent's hand, getting rid of any pesky permanents they might have in play. 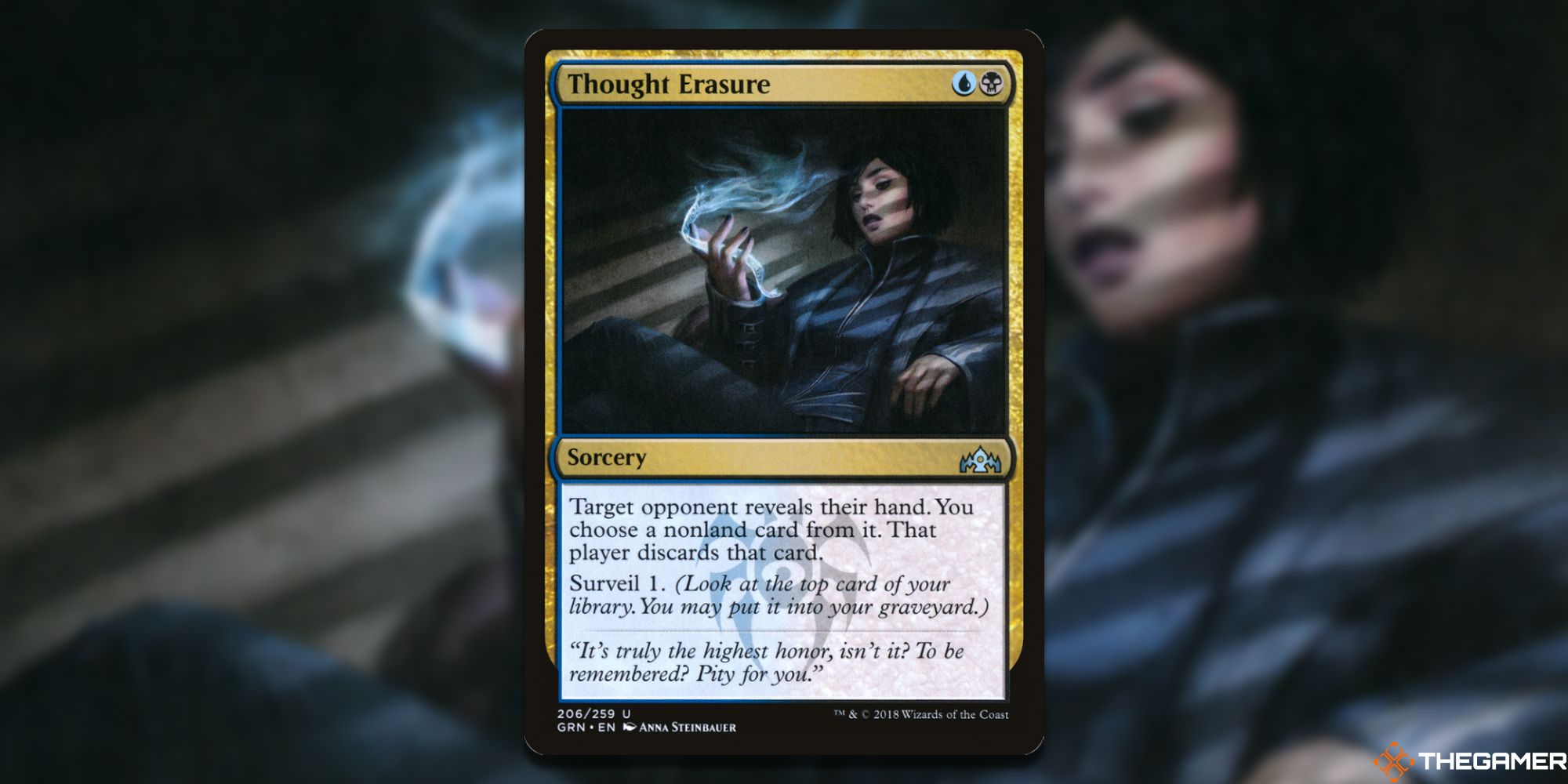 Thought Erasure is a solid hand disruption card on its own. For just one blue and one black mana, you can look at your opponent’s hand and force them to discard any nonland card from it.

While slightly more difficult to cast early on than other discard cards because of its two colors of mana, Thought Erasure can pull anything from your opponent’s hand, which is helpful against just about every deck. 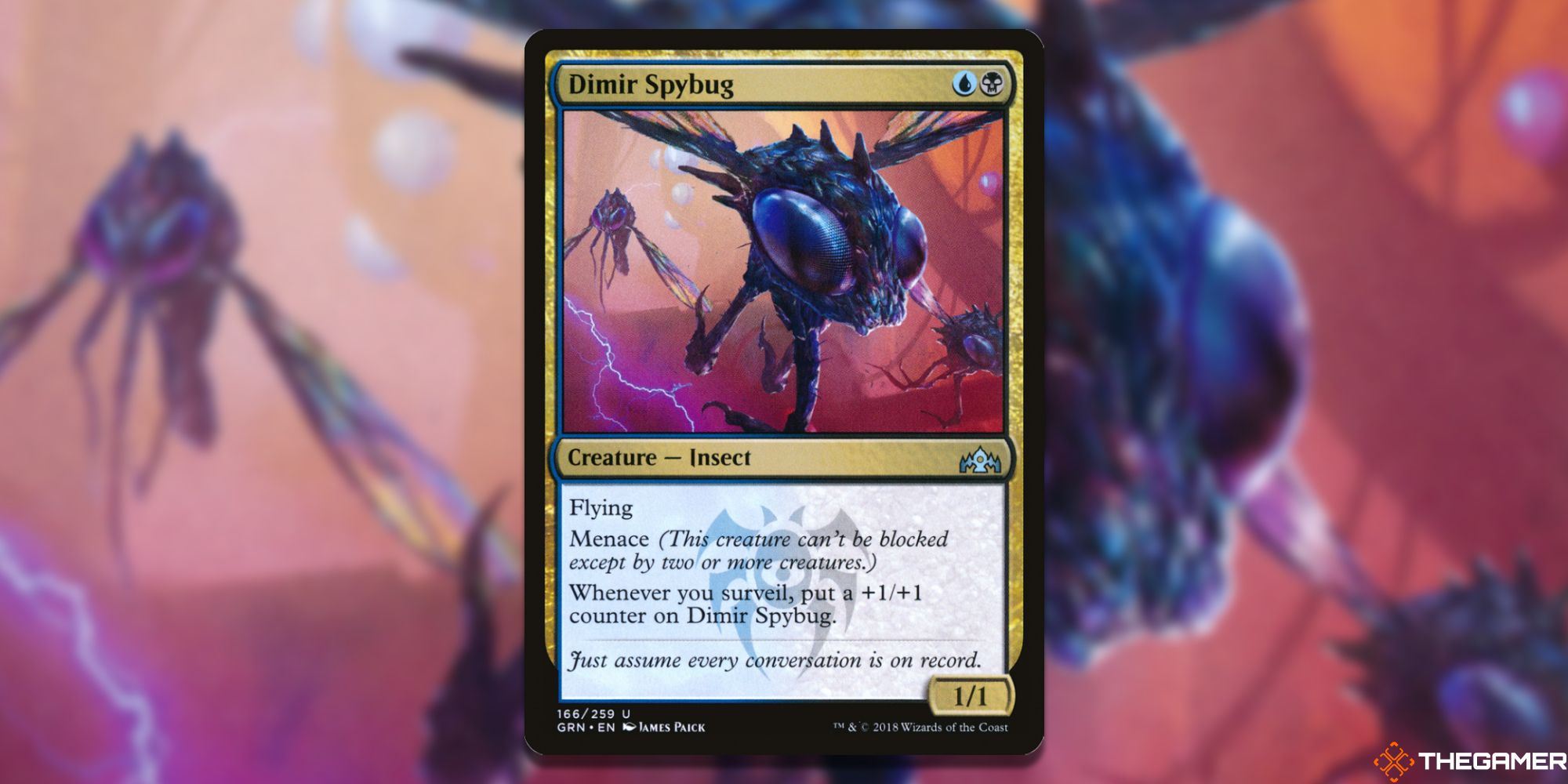 Every so often Magic: The Gathering cards are packed with keywords to make them more appealing to players and help push deck building and specific strategies that might not be worth playing otherwise. Dimir Spybug is one of those cards.

With two types of evasion on it, both flying and menace, Dimir Spybug is hard to block for just about any deck. On top of that, the little Spybug gets +1/+1 every time you surveil, steadily growing over the course of a game and dealing more and more damage as you cast spells. 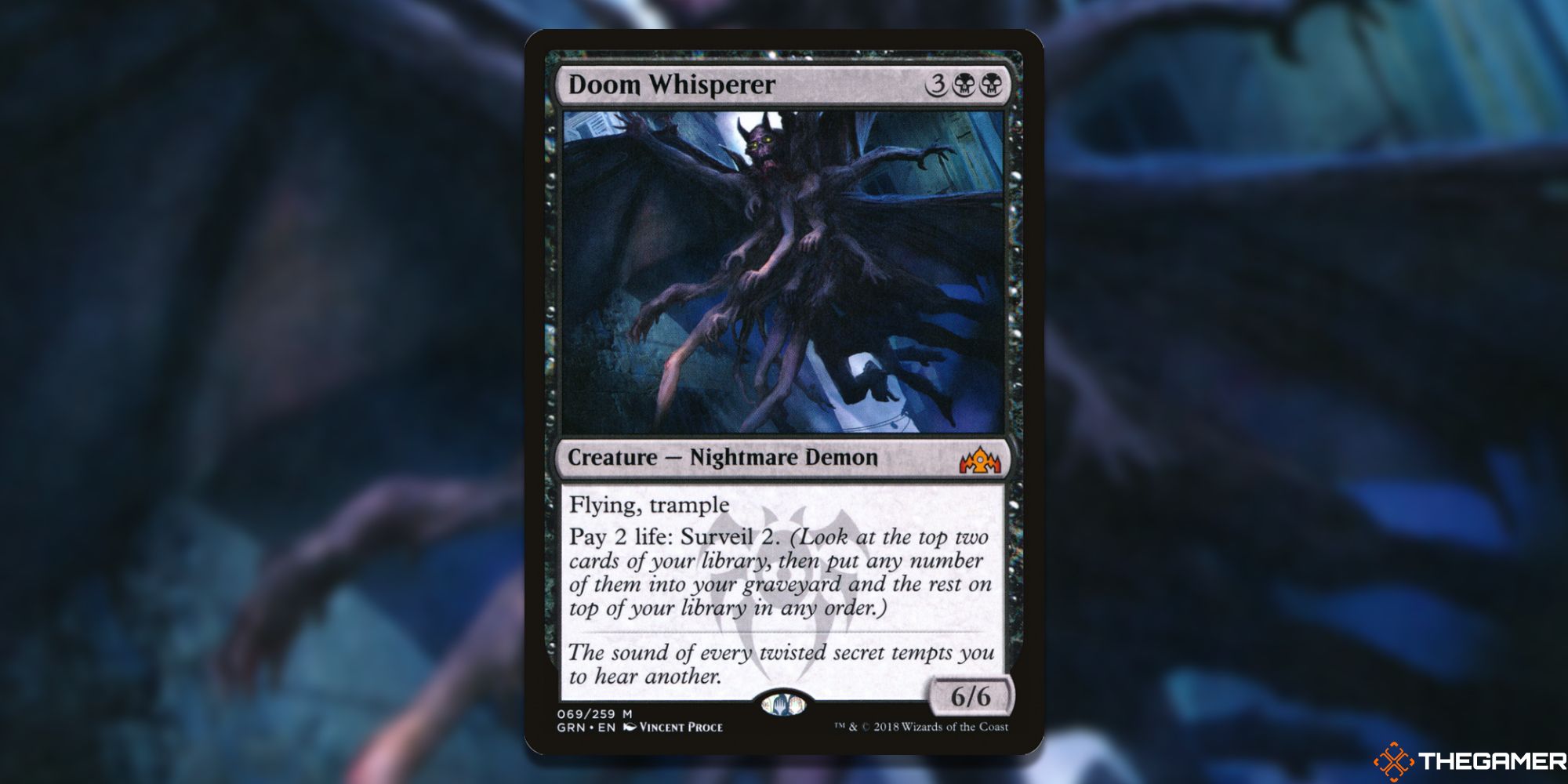 A real top-end creature for control decks, Doom Whisperer has continued to be played in the Commander format because of its powerful abilities.

This 6/6 flying creature with trample can bulldoze over many flying creatures, and at five mana it comes down very early in a game. The best aspect of Doom Whisperer is that you can pay two life to surveil for two. With no mana commitment or other qualifying ability, Doom Whisperer gives you plenty of opportunities to quickly dig through your deck. 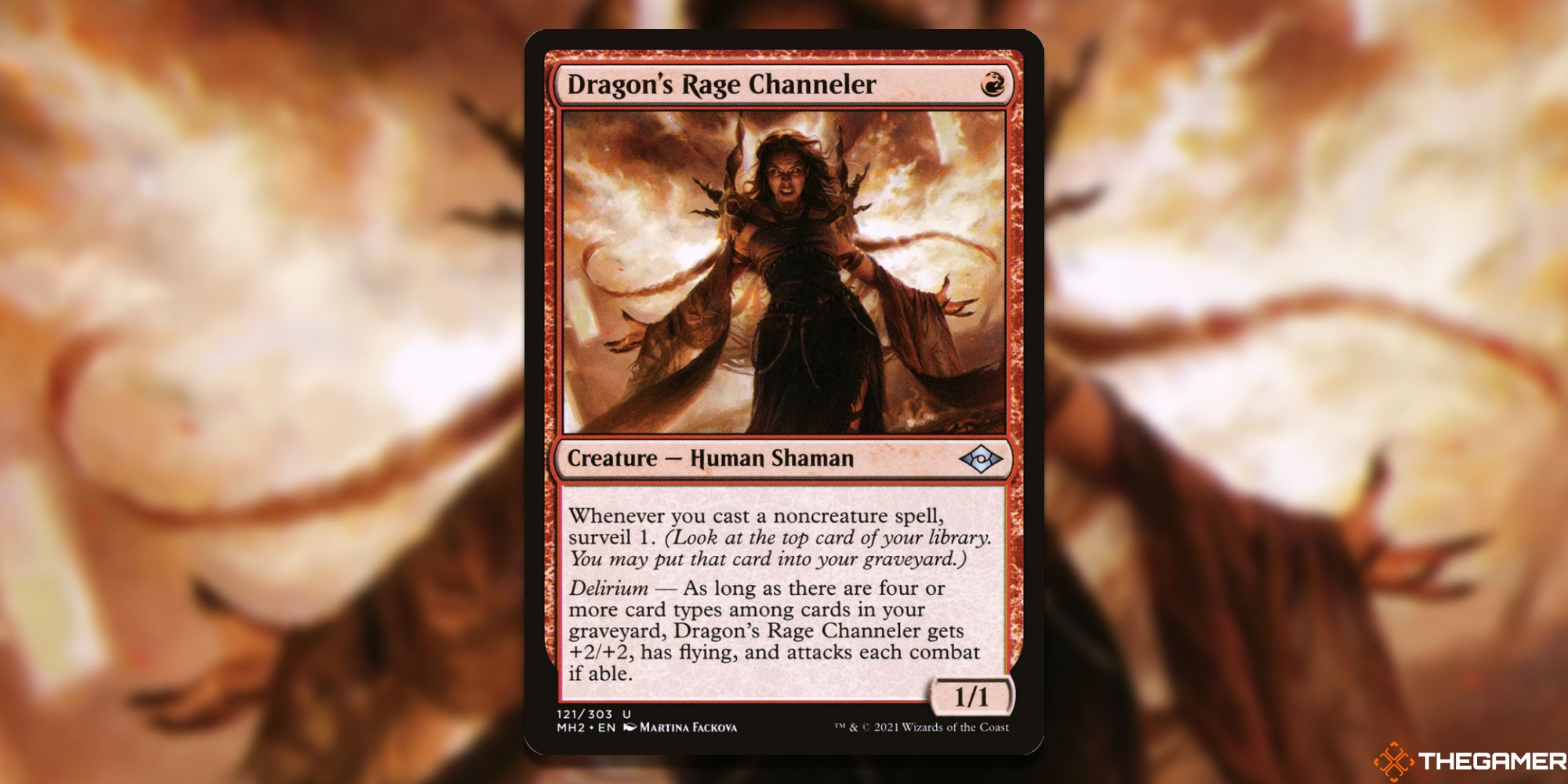 Easily one of the best creatures with surveil, Dragon's Rage Channeler lets you surveil one every time you cast a noncreature spell.

Origingally printed in Modern Horizon 2, this creature quickly found a home in burn decks as well as blue/red combo decks. Once you have four different card types in your graveyard, Dragon's Rage Channeler gains +2/+2, flying, and has to attack each turn if able. While it starts small, it can still be a pretty powerful mid to late-game beater with enough cards in the graveyard. 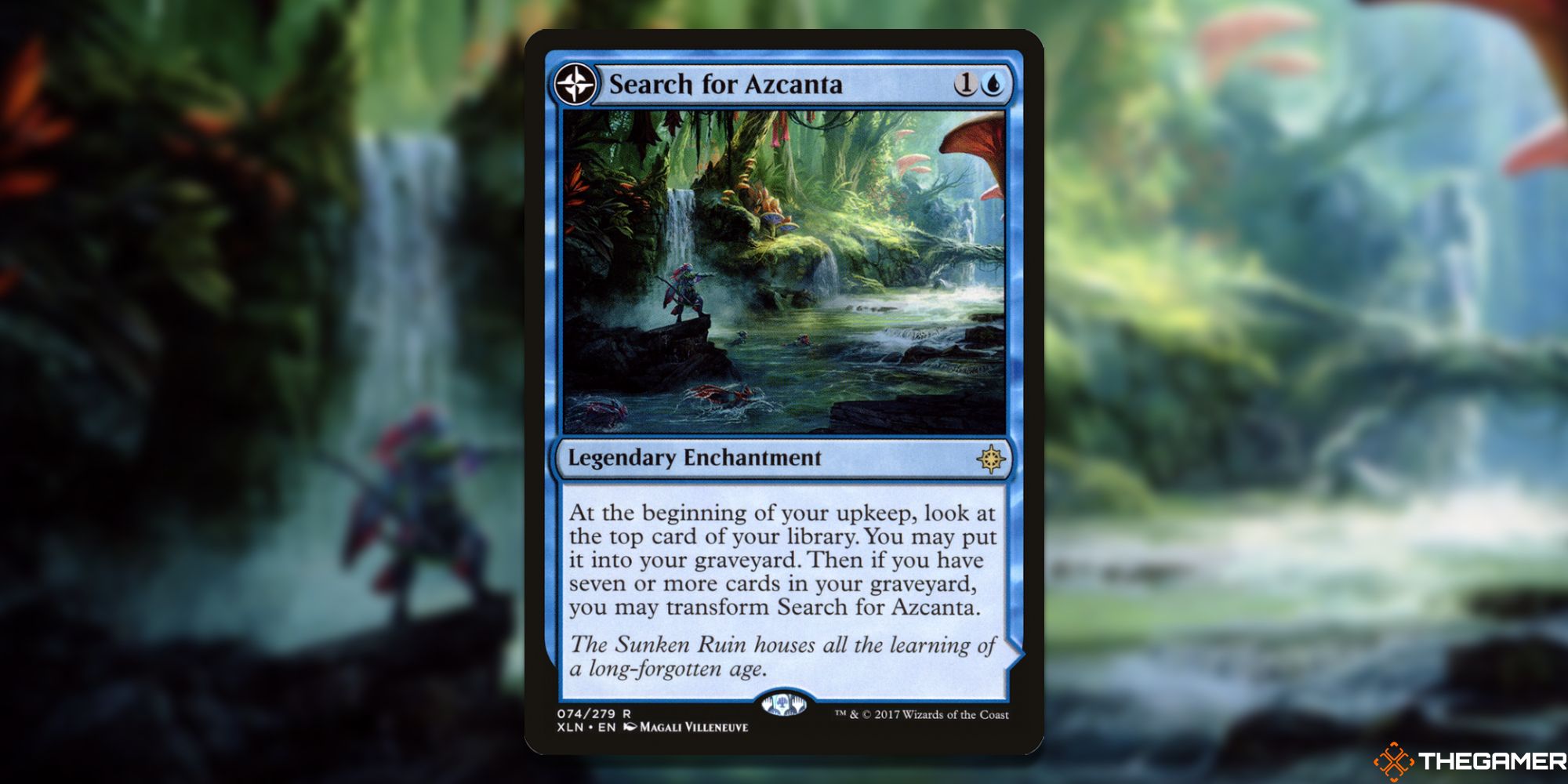 A repeated surveil effect that comes down as early as turn two is pretty fantastic but Search for Azcanta isn’t quite done yet. If you have seven or more cards in your deck this enchantment transforms into a land.

Sure, you can tap it for one blue mana if you need it but once flipped, Azcanta, the Sunken Ruin can dig through the top four cards of your library, adding a noncreature card to your hand and helping you win the game.