Join gaming leaders, alongside GamesBeat and Facebook Gaming, for their 2nd Annual GamesBeat & Facebook Gaming Summit | GamesBeat: Into the Metaverse 2 this upcoming January 25-27, 2022. Learn more about the event.

As companies expanded their tech investments during the pandemic, developers became saddled with larger workloads. Fifty-five percent of people in IT services say that the amount of work they’re expected to perform increased in 2021, according to a Statista survey. Developers, among other employees who transitioned to remote work as a result of the pandemic, claim they work more hours during the week than they did before — which is perhaps why 83% say they’re suffering from burnout.

Low-code development tools have been heralded as a potential solution, particularly as the worldwide shortage of developers continues to grow. Low-code tools enable non-developers from different business units like HR, finance, and procurement to build custom apps without having to write code, leveraging visual drag-and-drop interfaces and preconfigured templates. According to one source, low-code tools have the potential to reduce the development time by 90%. And using a low-code platform can save enterprises on average $1.7 million annually in operational costs, The New Stack found.

One of the vendors benefiting from the low-code development boom is Crowdbotics, which today announced that it raised $22 million in funding (a combination of seed and series A) from Victor Echevarria at Jackson Square Ventures with participation from Homebrew, Bee Partners, UC Berkeley’s House Fund, Harrison Metal, and PacWest. Based in Berkeley, California, Crowdbotics’ platform is designed to help customers to create low-code apps even in highly regulated environments like health care, finance, education, and defense.

Crowdbotics was founded in 2016 by Anand Kulkarni, who previously started LeadGenius, a platform that crawls the web for sales lead opportunities. He got the idea for Crowdbotics after graduating from UC Berkeley with a Ph.D. in machine learning and operations research, as well as funding from the U.S. National Science Foundation.

Crowdbotics allows over 1,400 customers to launch React Native and Django apps without having to learn programming languages. React Native is a JavaScript library used to develop apps for iOS and Android, while Django is a popular framework primarily for web app development. With Crowdbotics, users can iterate app screens and data models with a visual editor and deploy to hosting platforms like Heroku. Under the hood, the platform produces real code synced to a GitHub repository, allowing developers to audit and customize after the fact.

“Product teams spend most of their time bogged down in the routine parts of software creation, not the interesting stuff. But the usual solution, low-code tools, aren’t extensible or developer-friendly enough to support serious businesses — they’re black boxes that are never as good as real code,” Kulkarni told VentureBeat via email. “The team started Crowdbotics to let domain experts from outside tech turn ideas into code. The company’s product … lets creators, innovators, and product teams build full-code applications using reusable building blocks and on-demand engineering pulled from all over the web.”

As of May 2021, Crowdbotics claims that over 20,000 apps have launched on its platform, including “mission-critical” health care apps, venture-backed software products earning millions in revenue, financial trading engines, learning management platforms, and government tools.

“The Crowdbotics platform is at its core enablement of ideas to code at much cheaper price point,” Kulkarni continued. “Crowdbotics plays nice with IT by pairing the simplicity of low-code tooling with the transparency and customization of real, open source code. Executives can still enable their non-technical employees to build with low-code features like … storyboard tools, functional feature modules, and visual data mapping. However, developers will also find robust support for their existing workflows, including the ability to edit the project’s code directly, configure microservices, and sync changes to a linked GitHub repo. If they want to accelerate development, organizations can complement their internal team’s output via our platform’s integrated hiring cloud.”

Formstack found in a recent study that 20% of workers have adopted no-code tools — 66% within the past year and 41% in the past six months. Gartner forecasts that low- and no-code app platforms will account for 65% of all app development by 2024. Meanwhile, Forrester expects the market for low-code development platforms will increase to $21.2 billion by 2022, up from $3.8 billion in 2017.

But low-code tools aren’t perfect. Organizations say that a lack of experience with low-code platforms remains one of the biggest hurdles to adoption. A study by OutSystems, meanwhile, found that 37% of organizations are concerned about “lock-in” with a low-code vendor and that 32% don’t believe they could build the types of app they need with low-code tools.

Crowdbotics — whose subscribers include teams at Uber, McKinsey, Meta (formerly Facebook), and the U.S. Air Force — claims its platform solves the lock-in problem by allowing companies to access their app’s source code, which they can repurpose as they wish. “You can export your code, host it on your own, and develop on your own. This is easy to do with Crowdbotics,” the company writes on its website. 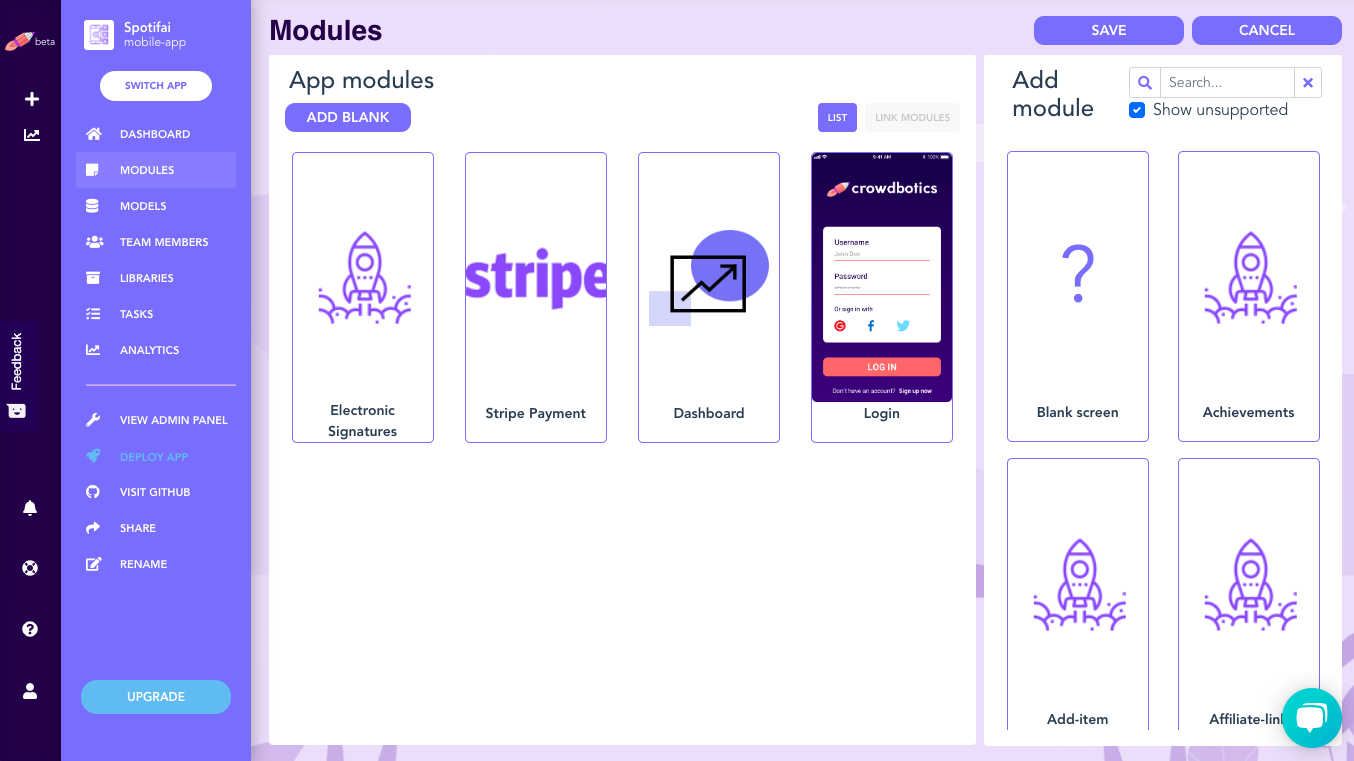 Crowdbotics competes with companies including Webflow, which recently raised $140 million for its set of web app development tools and services. In March, no-code development startup Airtable raised $270 million at a $5.77 billion valuation post-money. Unqork, another startup creating a no-code enterprise app development suite, last year secured $207 million in a funding round that catapulted the company’s valuation to more than $2 billion.

According to SpreadsheetWeb, low- and no-code vendors raised $2.3 billion during the first three quarters of 2021, more than doubling the total investments they received in 2020. Fifty-employee Crowdbotics’ total capital raised stands at $28 million.

“We ended 2021 comfortably north of a $10 million run rate, which is 300% growth from a year ago. In 2022 we’ll triple revenues again,” Kulkarni added. “Crowdbotics raised the [latest capital] to extend its core … product, which will add more prefab features and architectures, improved design tooling … and a more powerful product management-as-a-service suite. We also intend to introduce niche feature sets for target industries, including health care, finance, education, tech, media, and Web 3.0.”