Whispering Islet is the home of the Lazenith and Sidereal, Nineveh. The overarching narrative of Lost Ark revolves closely around her, as she seems to find herself at the center of many important events in the story. That said, Whispering Islet is where you first meet Nineveh, who is stuck in a deep sleep that you must release her from (yes, there is a reference to Sleeping Beauty here).

There’s a fair number of things to do on Whispering Islet, as aside from the main questline that sees you waking up Nineveh and helping her out, there is an Island Soul to acquire, a Rapport NPC to gain the trust of, an Una’s Task to keep you coming back, and a whopping seven Mokoko Seeds to collect.

Where Is Whispering Islet? 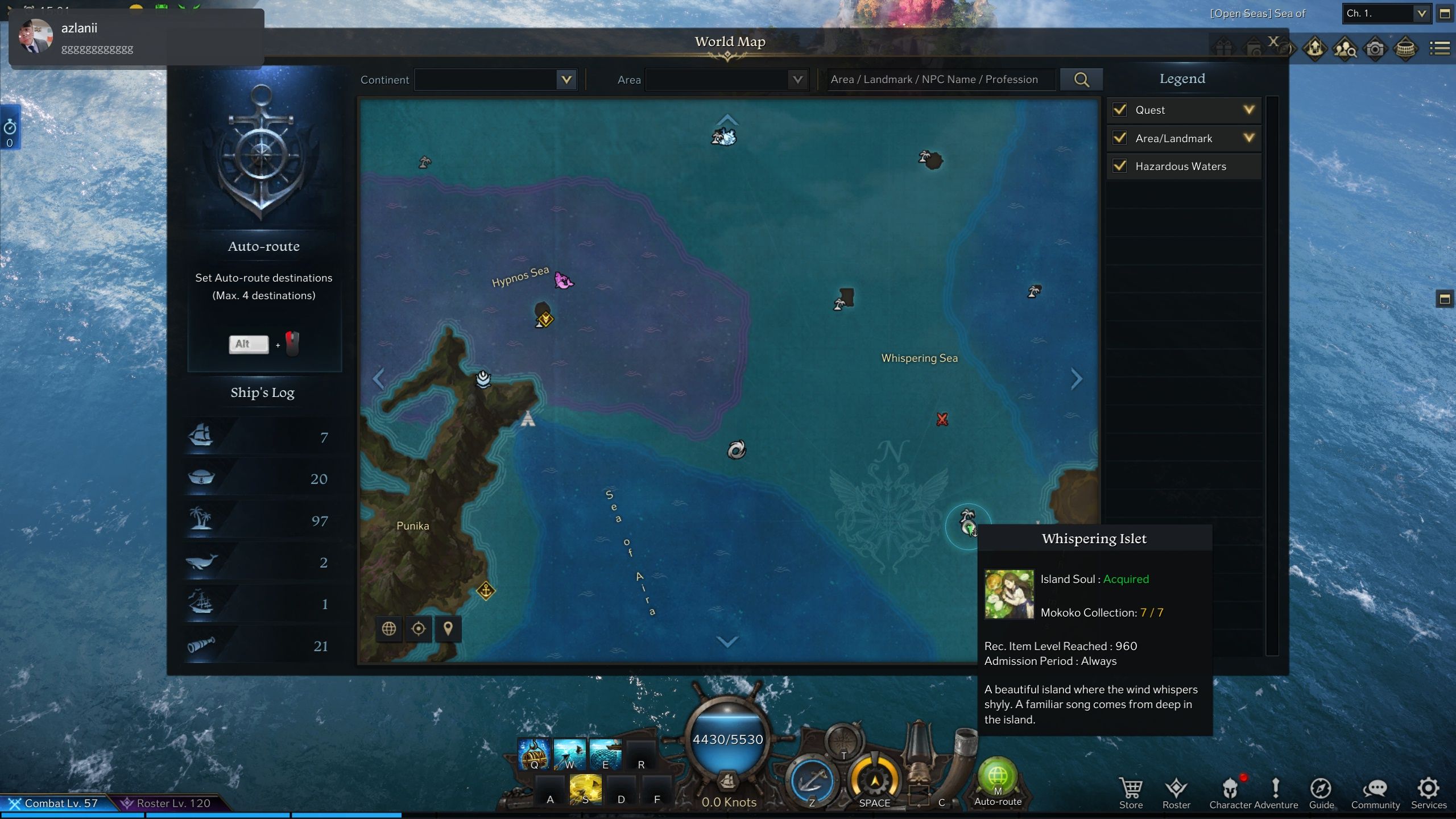 Whispering Islet is located in the Sea of Procyon, right next to the Crescent Moon Marina, which is on the western coast of Rethramis. However, considering the fact that Rethramis doesn’t have a port, the quickest way to get to Whispering Islet without a Bifrost key is from Punika’s port (Tideshelf Path), though South Vern’s port (Bellion Ruins) is only slightly further away. 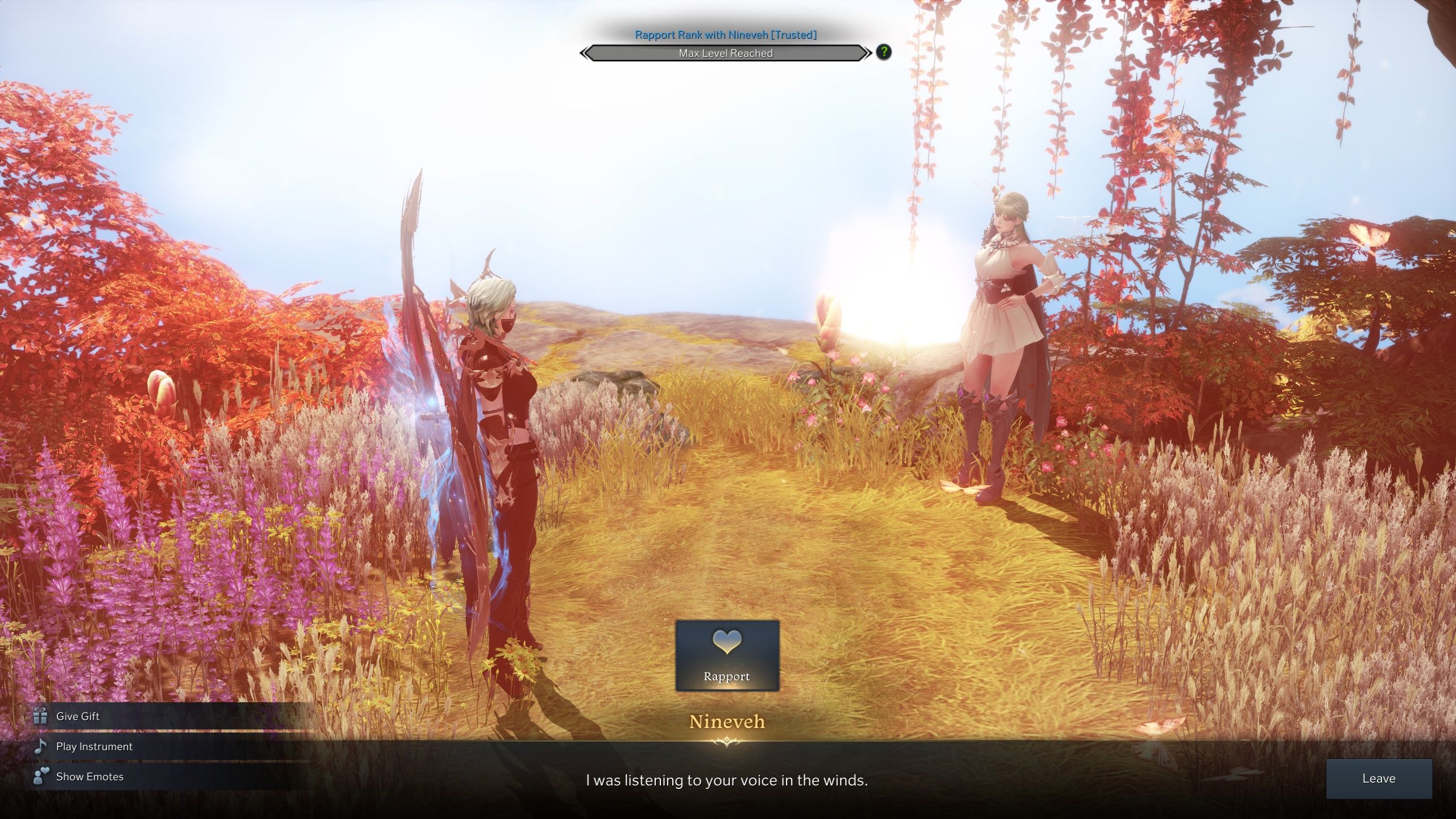 In order to progress Nineveh’s Rapport, you need 180 virtue points in each category (Wisdom, Courage, Charisma, and Kindness). You must also complete the quest “Start of Our Story.” Let’s take a gander at the points required for each of her rapport ranks and what she rewards at each milestone:

The total number of rapport points required to max out Nineveh at trusted totals at a hefty 102,200. Yes, that is a lot, but between the Island Soul, Giant’s Heart, legendary card, and a decent sum of gold, it is somewhat reasonable.

If you don’t drop any rapport gifts into her, be prepared for an extremely long grind, as between the two songs (Heart’s Melody and Song of Temptation) and two emotes (Cute and Affection) you can perform for her, you can only put 1,175 rapport points into her per day (that is not counting the rapport points you get from completing her rapport quests, though).

If you have a character that makes use of the Nineveh card in their card set, dropping loads of rapport gifts into Nineveh is certainly recommended, so you can get it upgraded as soon as possible. 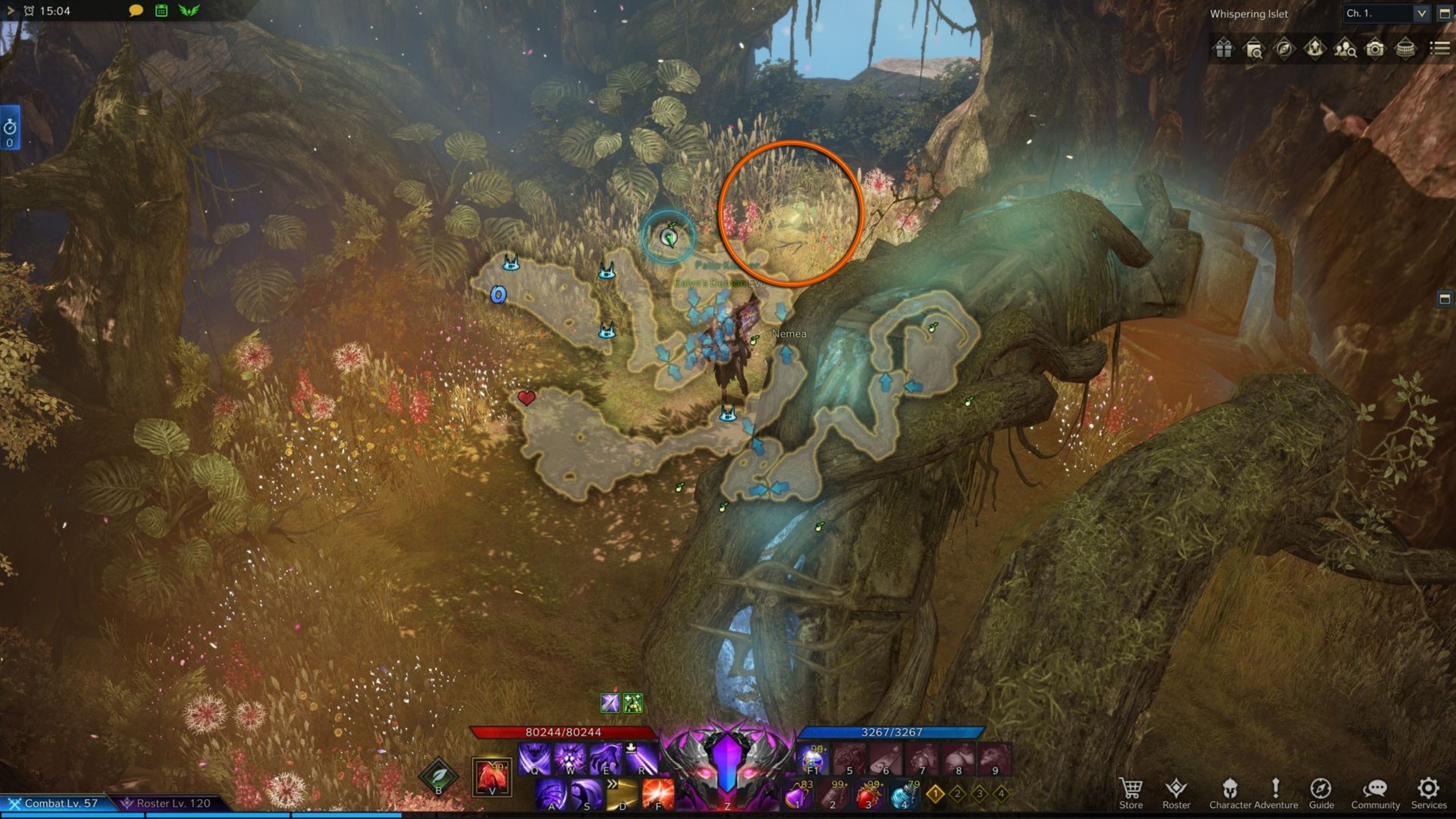 The first Mokoko Seed is in the northern region of the island and requires Forest’s Minuet to access, as the seed is gated behind one of those vine-gated archways. Play the song near said archway to access the first seed. 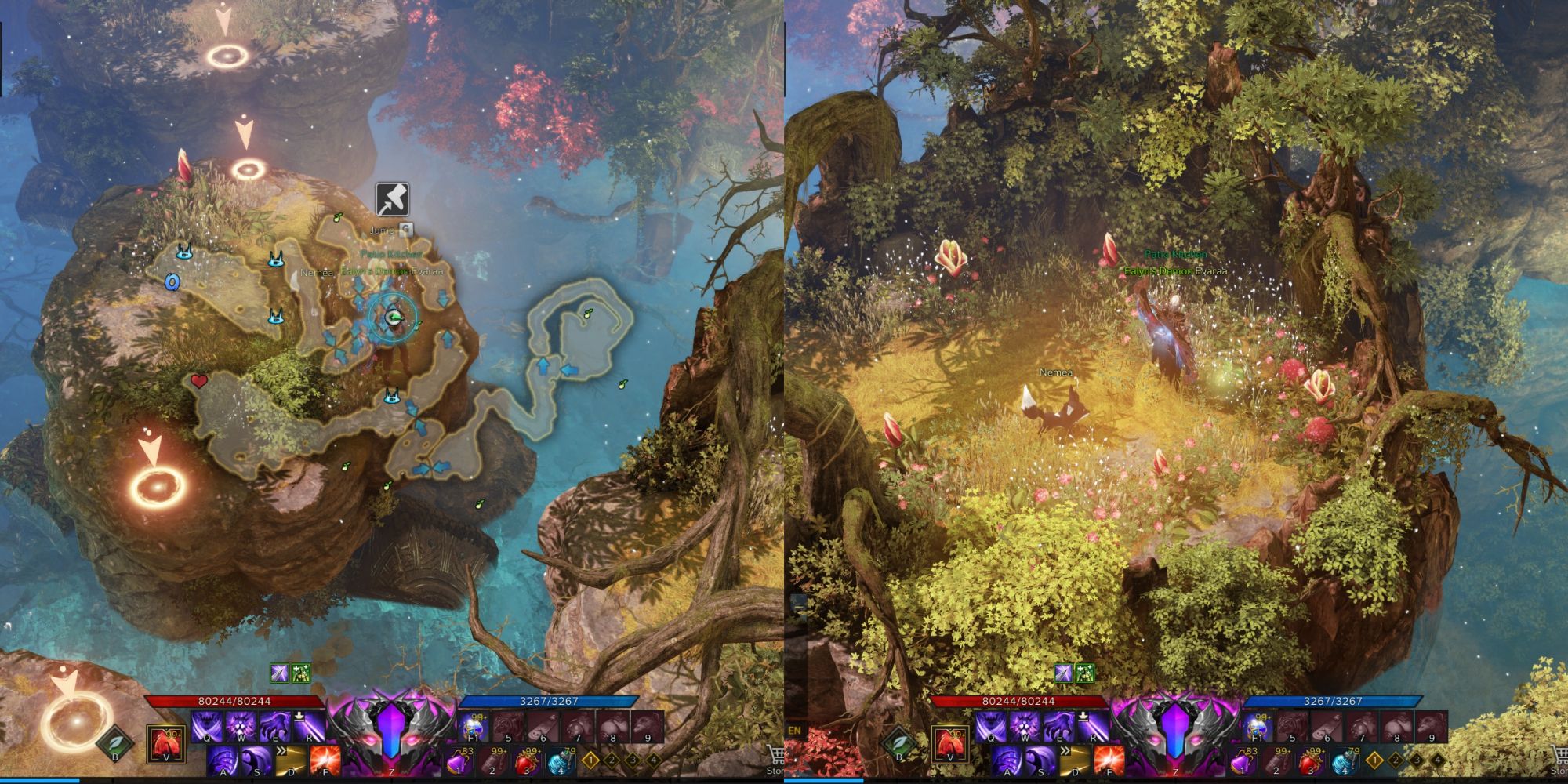 The second Mokoko Seed is off-map and requires that you have completed the initial questline of the island in order to access it. Once this is done, a jumping point will become available (not indicated with a bouncing yellowish-gold arrow) on one of the small rock platforms in the northern area of the island (left image). Jump across for your second Mokoko Seed, which blends in really well with the flora and light (right image). 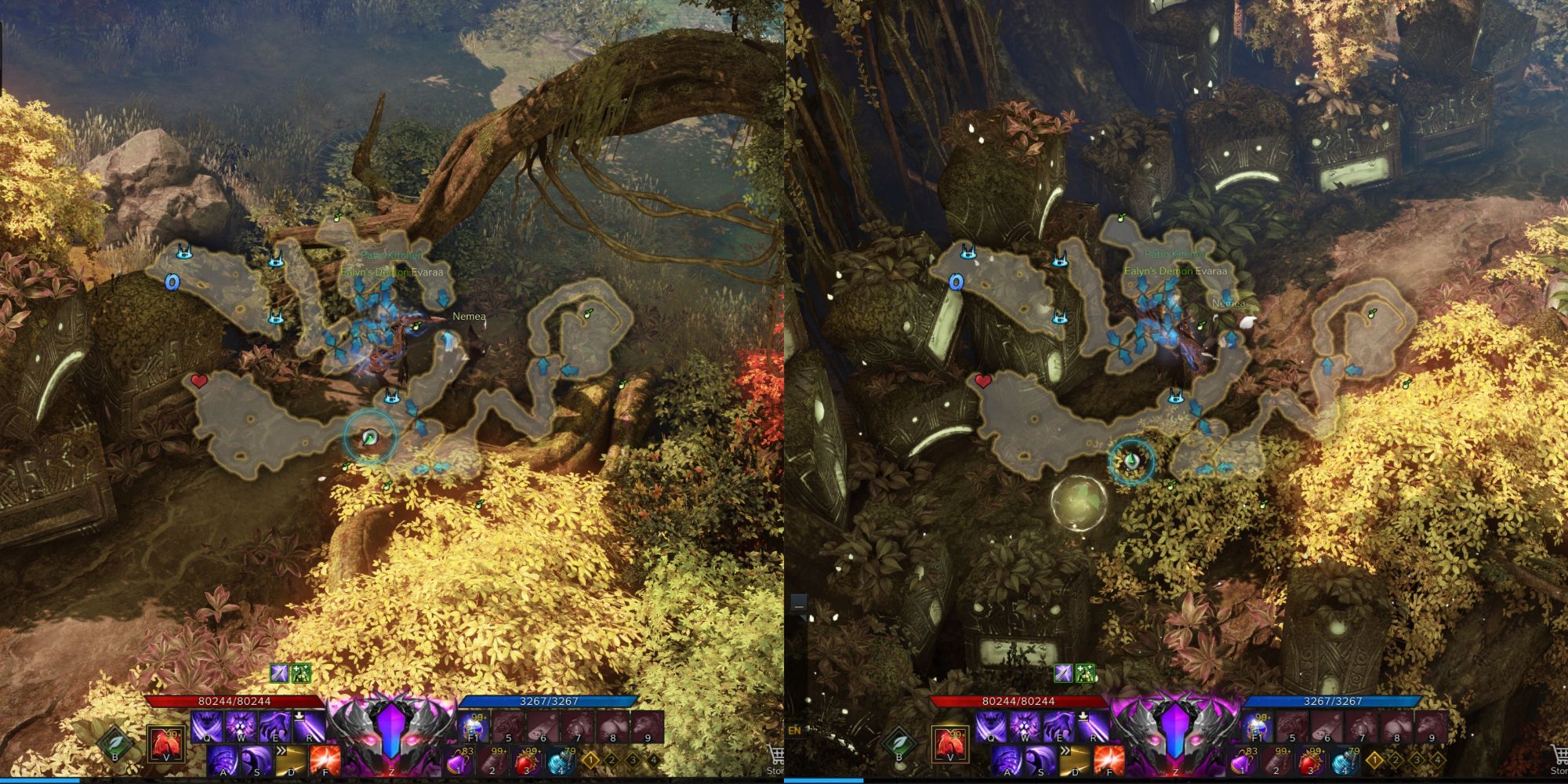 The third Mokoko Seed is also off-map, and its hidden entrance – a naturally formed tree archway – is on the central strip of the island (left image). Follow the path all the way down until you reach the end, and the third Mokoko Seed lies in wait for you there (right image). 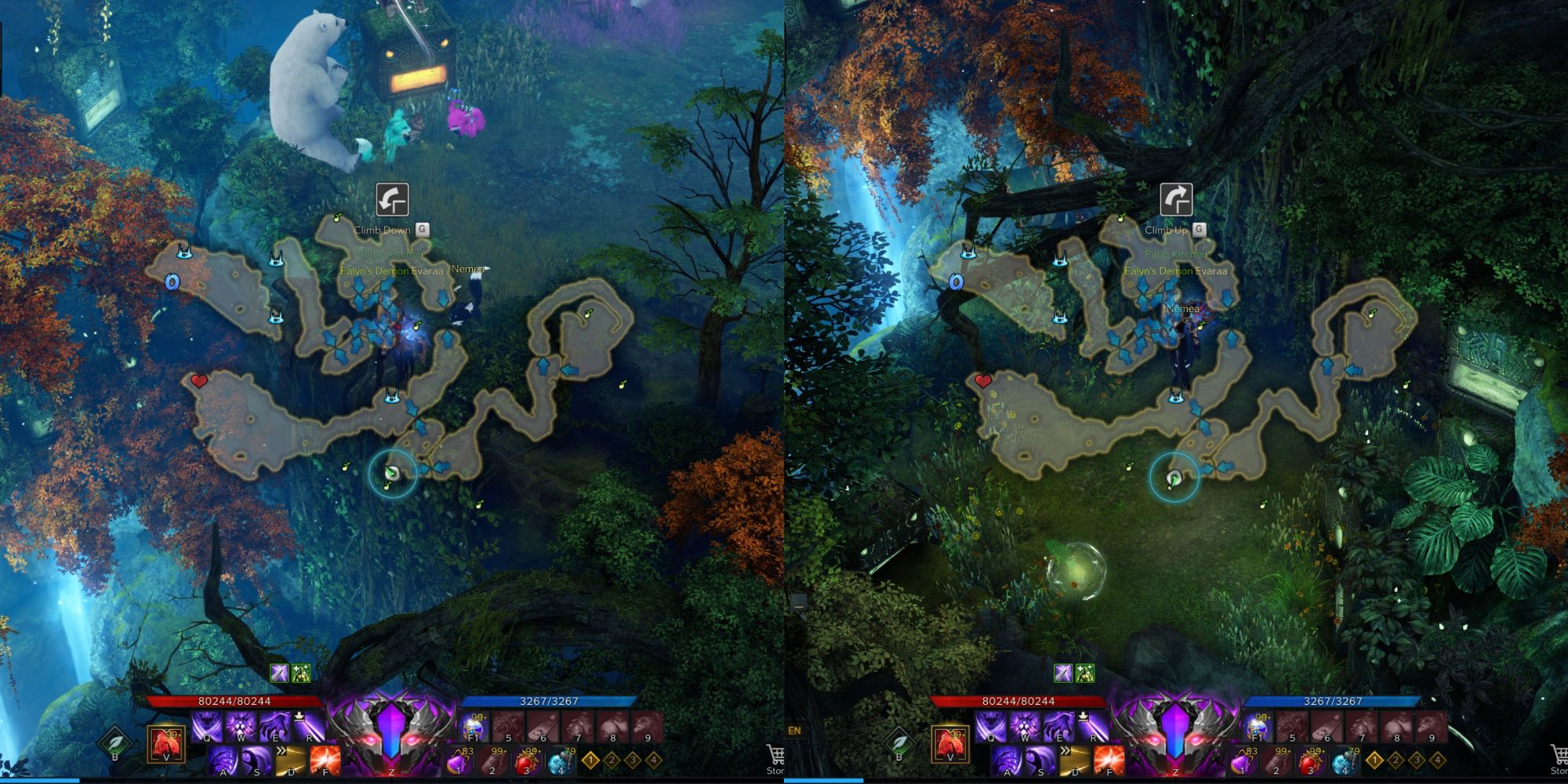 The fourth Mokoko Seed is, again, off-map. Its hidden entrance – a cliff side covered in vines that you can climb down if you stand close enough to it – is on the western edge of the southern portion of the map (left image). Make your way down it to get to a small grassy area with all the totoikis, and your fourth Mokoko Seed is there (right image). 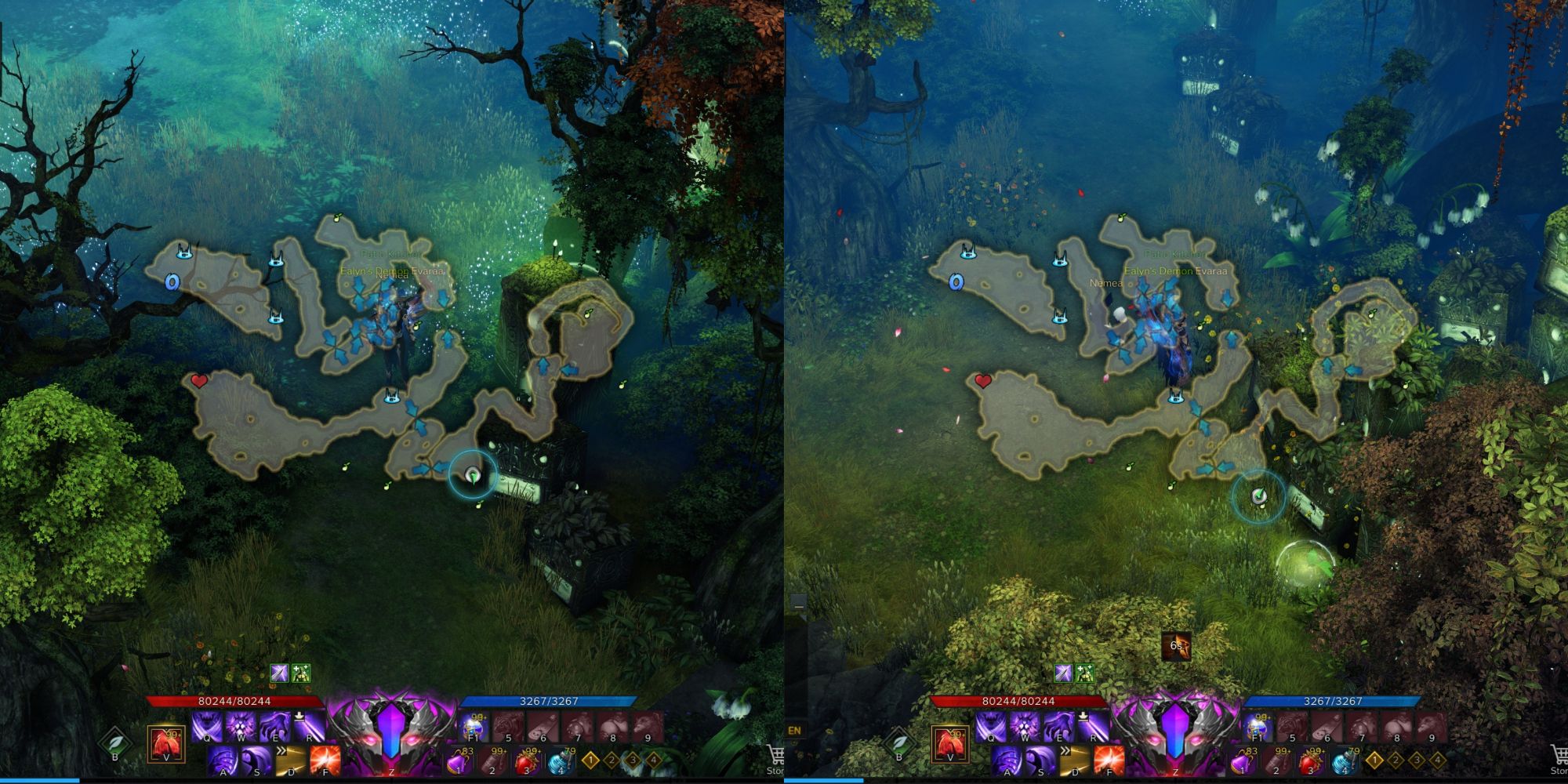 The fifth Mokoko Seed is, yet again, off-map. Its hidden entrance is just an ordinary, obscured pathway, and is also in the southern portion of the island (left image). Follow it down until you reach the end and the fifth Mokoko Seed is sitting right next to a rectangle-mouthed totoiki (right image). 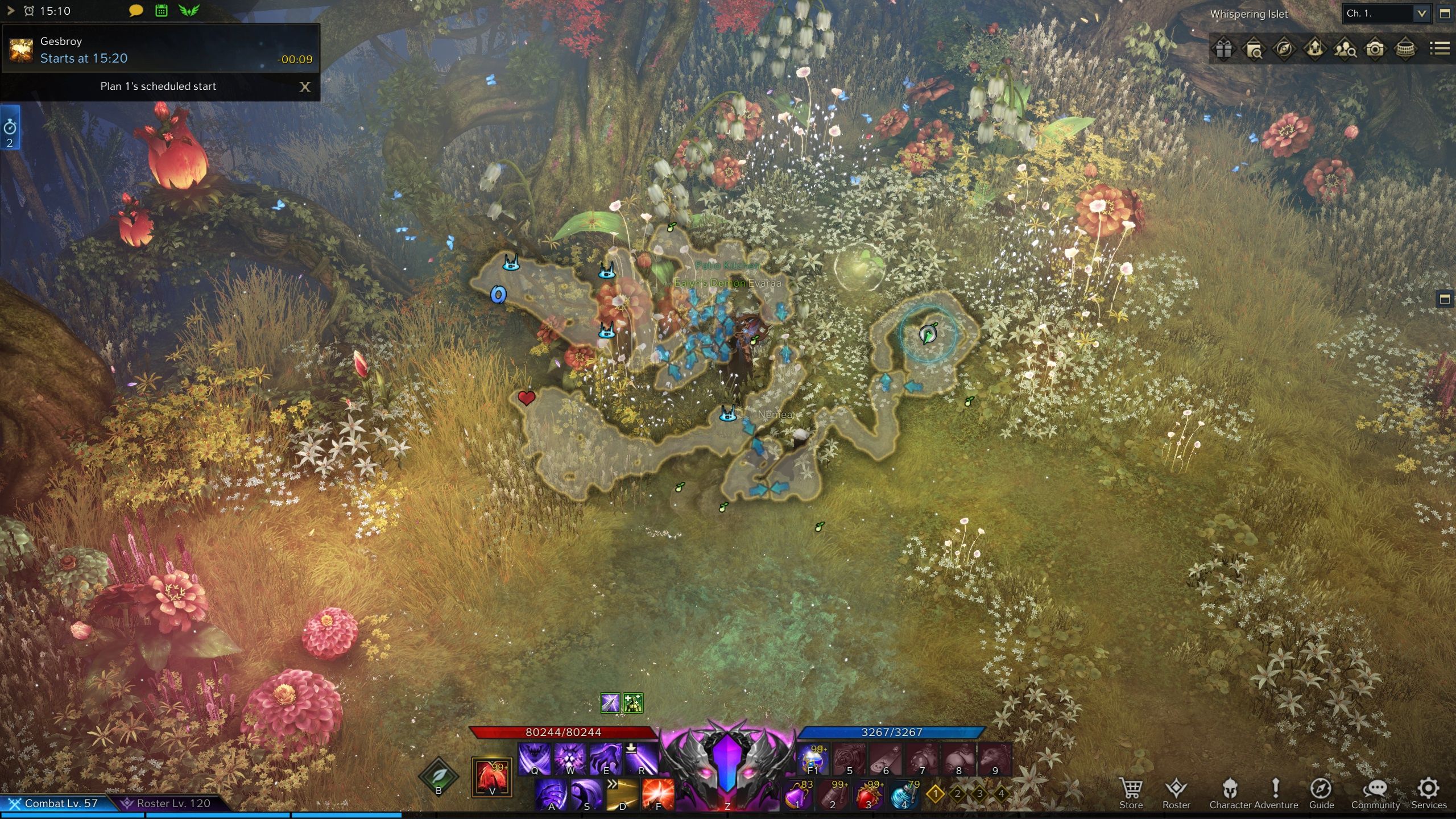 The sixth Mokoko Seed is refreshingly on the actual map, in the easternmost section of the island. It’s sitting out in the open, but it blends in pretty well with the grass and flowers, so keep your eyes peeled. 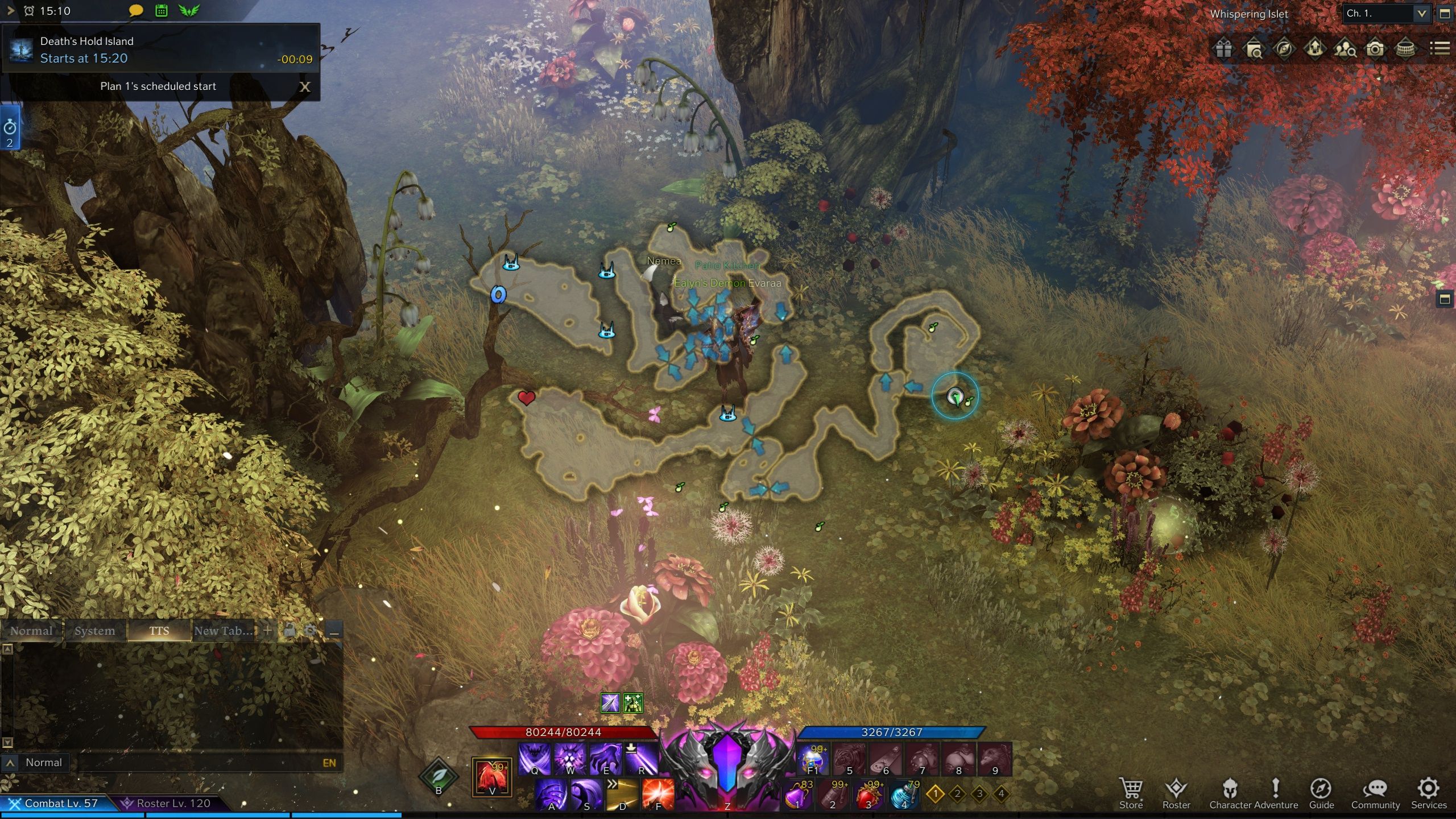 The seventh Mokoko Seed is off-map (shocker). The hidden entrance is a pathway through some large trees in the easternmost section of the island. Walk on through it, and you’ll find the seventh and final Mokoko Seed hiding amongst a small cluster of bushes and flowers. 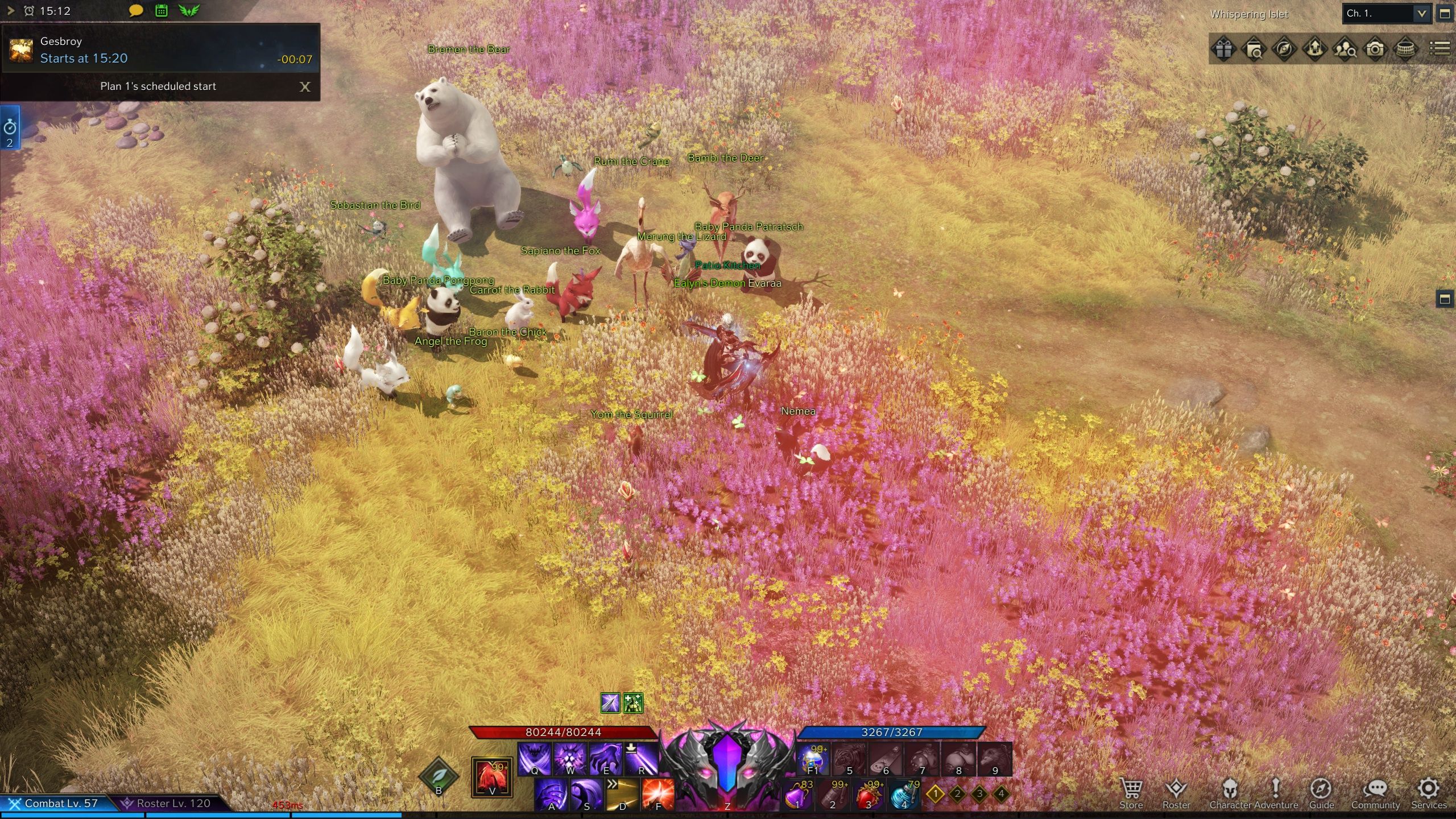 The Una’s Task here (titled “Choir Teacher”) is remarkably easy and takes virtually no time to complete (especially if you have a Bifrost point set to Whispering Islet). In order to gain access to it, however, you’ve got to do a couple of quests (that net you some silver and Life Shards for tier two honing), starting with “Whispering Voice,” acquired from Allegro, and ending with “The New Us,” acquired from Yom the Squirrel (yes, that’s the same squirrel you meet in Punika).

Each tier requires a different song to be played for the choir of talking animals. Tier one requires Forest’s Minuet, tier two requires Song of Resonance, and tier three requires Heavenly Harmony, the latter of which is the most difficult to get (it’s an RNG drop from Harmony Island, one of the Adventure Islands tied to Procyon’s Compass).

While, on face value, the rewards may not seem that worth it, the real reason to max out this Una’s Task reputation is for the skill point potion rewarded to you in tier three, as those potions are one of the most valuable things you can acquire in the game.