You are here:
Home / Lost Ark Vs. New World: Which Game Is Better?

Lost Ark Vs. New World: Which Game Is Better?

New World and Lost Ark are some of the newer MMORPGs to come out in the past few years. MMORPGs are a large and loving genre that has had many nostalgic classics people still continue to play today. No matter what genre of game is your favorite, you'll always be looking for the next best thing. Especially when you've been playing one of the older titles for some time now. The question is which of these titles is best to dive into first?

These two titles are also the first-ever Amazon Games titles to be released, leaving a lot to be expected and unexpected. Lost Ark maintains an original MMORPG feel and New World offers a fresh perspective on the genre. Each game has its pros and cons to weigh. 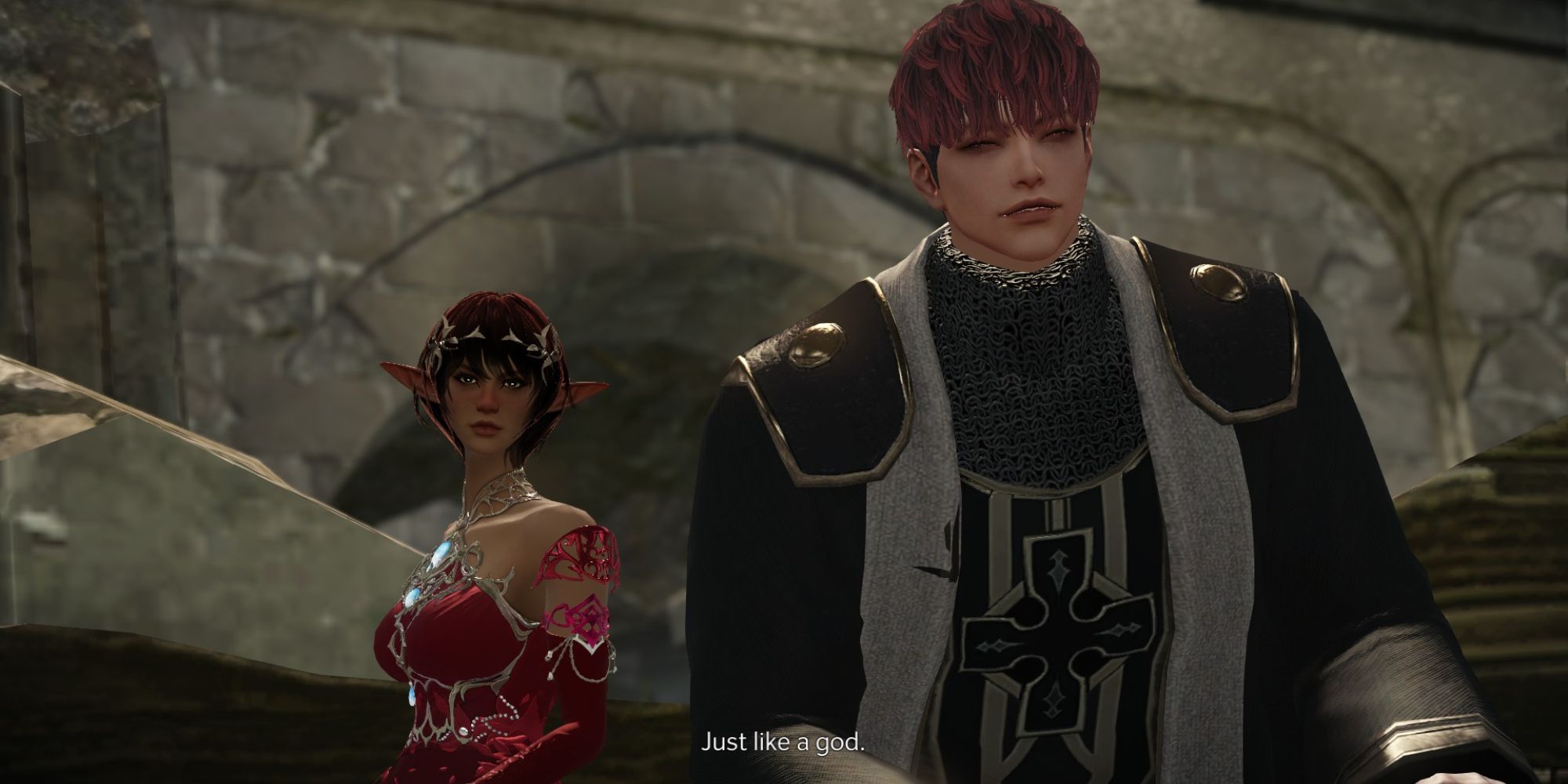 If you're wondering which game is worth trying out over the other, Lost Ark is free, whereas New World does come with a hefty price, like most new games that come out. Some fun free games are hard to come by. Most MMORPGs are free, and Lost Ark continues the trend.

Whether you end up liking the game or not, you have nothing to lose by downloading a copy and trying it out yourself. 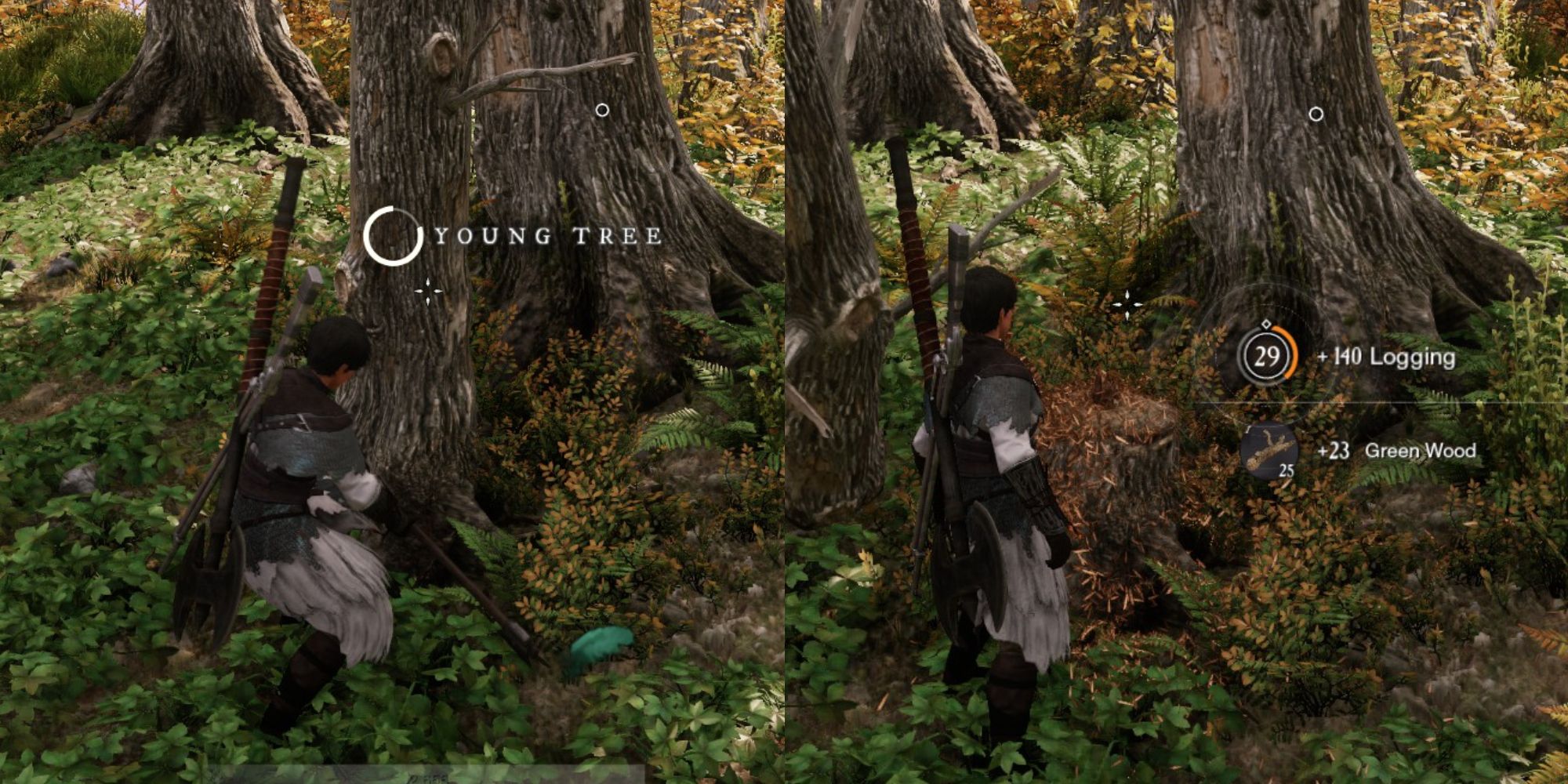 New World is an excellent game if you like seeing numbers go up. You can grind and level up your many different skills at a satisfying pace and get lost in the sauce. Games like these are often played to get lost in, spending hundreds of hours doing repetitive tasks.

Repetition, numbers flying, and a big community are what makes MMORPGs hard to put down. 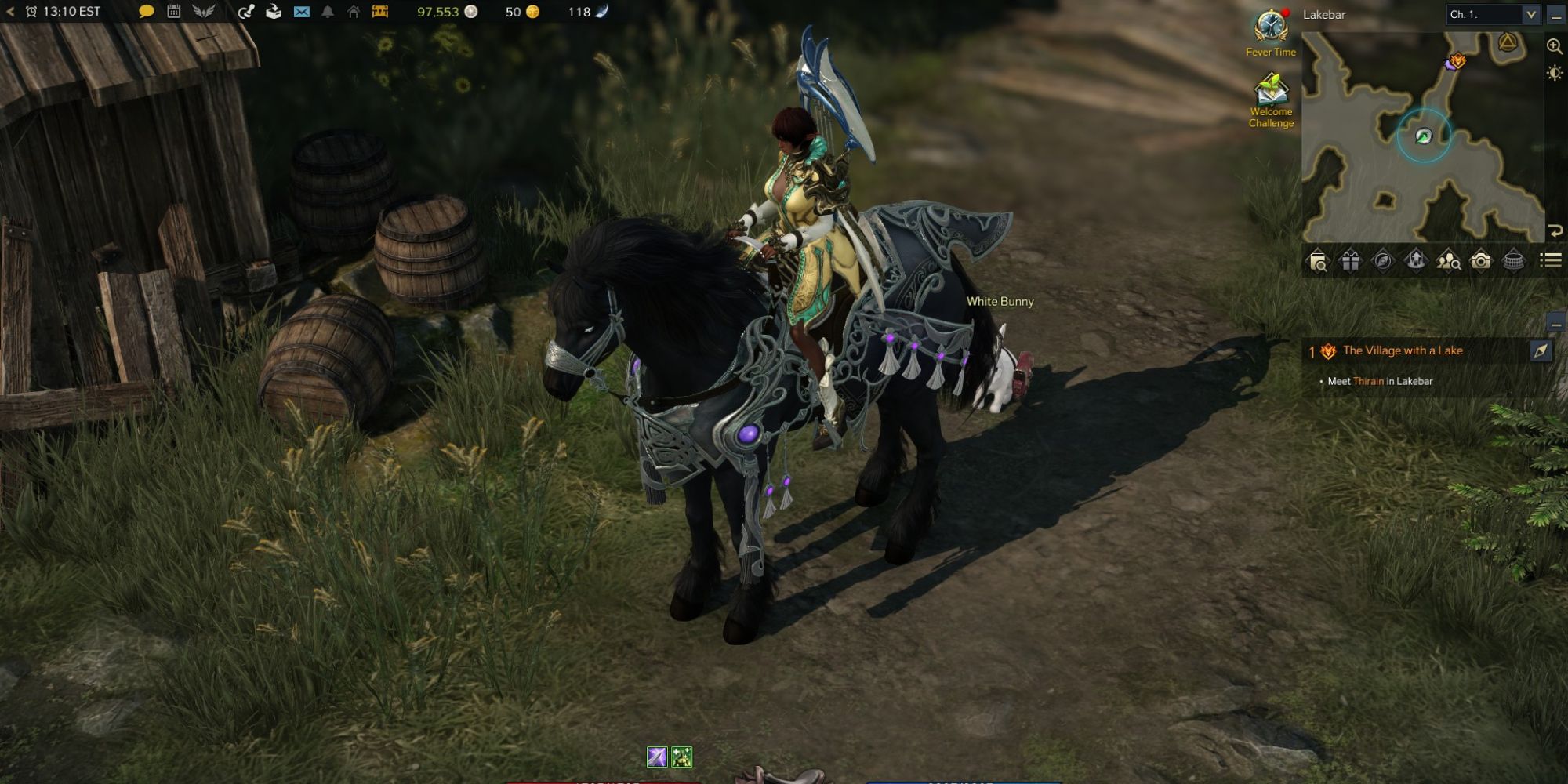 A woe of New World is that there are no mounts in the game. Fast traveling is made difficult. You have to pay a hefty price to fast travel and must walk on foot to most locations. Lost Ark, on the other hand, makes it a breeze like most other games. You are given a mount as soon as you step foot into the first village and the first quest. In fact, you'll even get given free mounts for certain events. 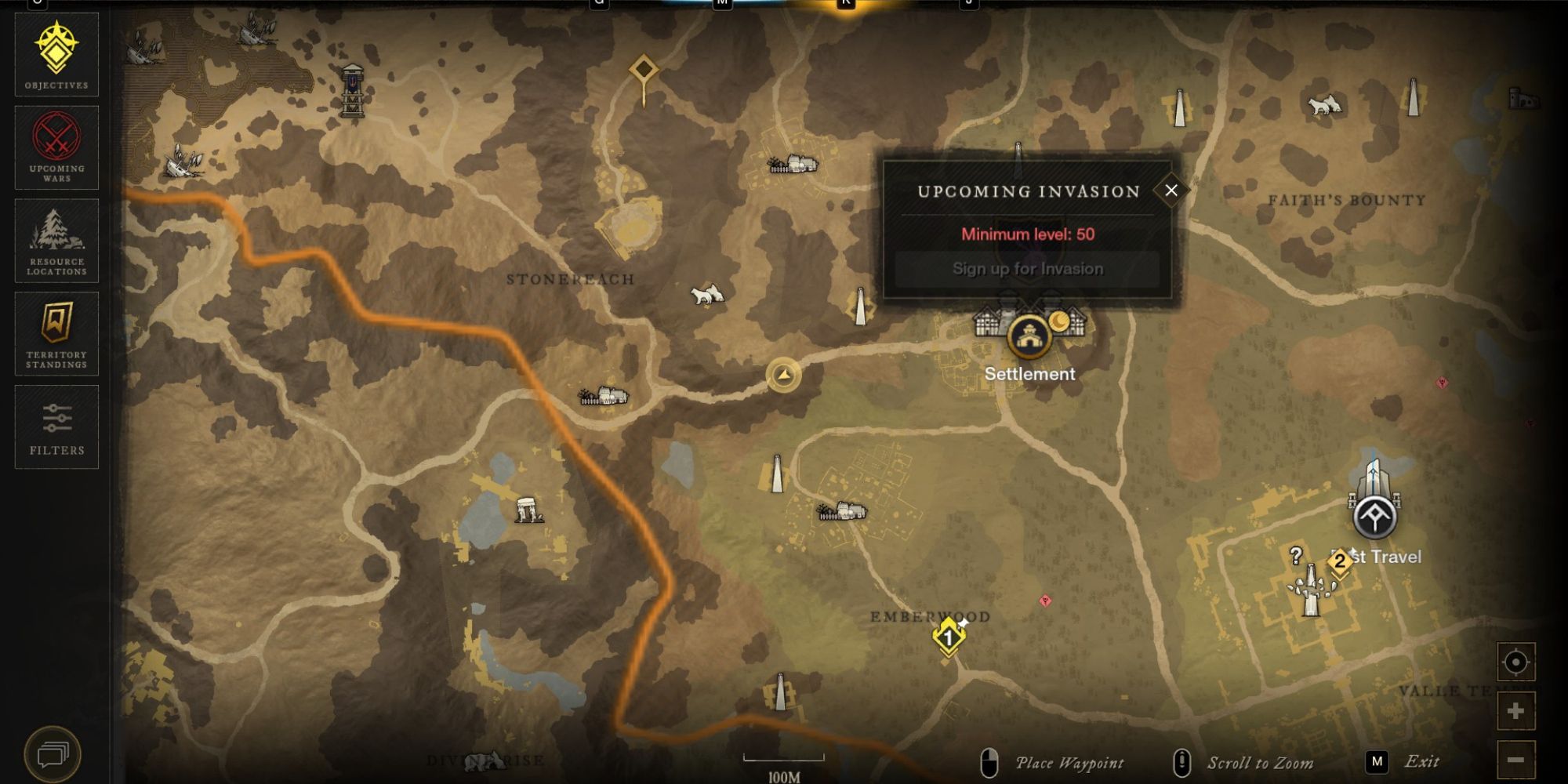 Lost Ark has PvP, but in a controlled setting. You have to go to the PvP arena and go through agreed-upon matches against players. In New World, if you activate PvP on your character, you can get attacked at any moment. This can be a high stake that keeps you on your feet and brings more excitement to the game if that's your cup of tea.

The PvP in New World is open-world. Groups of factions exist within each server. You must join one regardless of if you choose to go PvP or not. These factions can take over servers by laying out wars against settlements and other factions. This means you and your army can start a war with a whole other army of real players. With PvP on, traversing through the world feels more dangerous and exciting. 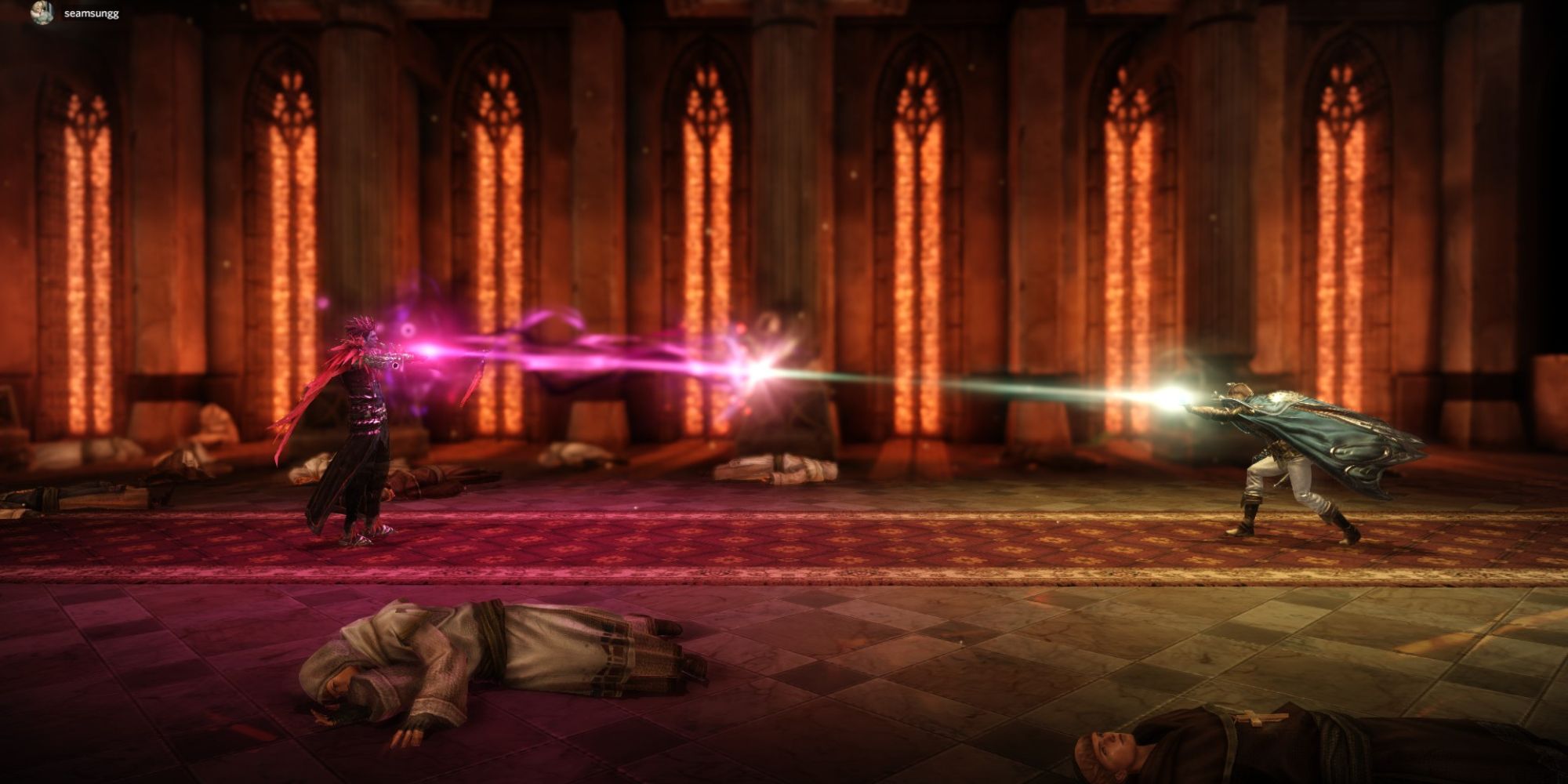 Lost Ark has that Japanese flair. Character models are similar to that of anime and the cutscenes are even more so. Cutscenes show off dramatic displays of Godlike powers, distress, and good versus evil. Anime is known for its excessive fights between the bad guy and the good guy, trying to amp up how powerful the other is with every magical blast.

If you prefer the anime aesthetic and design when it comes to entertainment and video games, you may prefer Lost Ark. 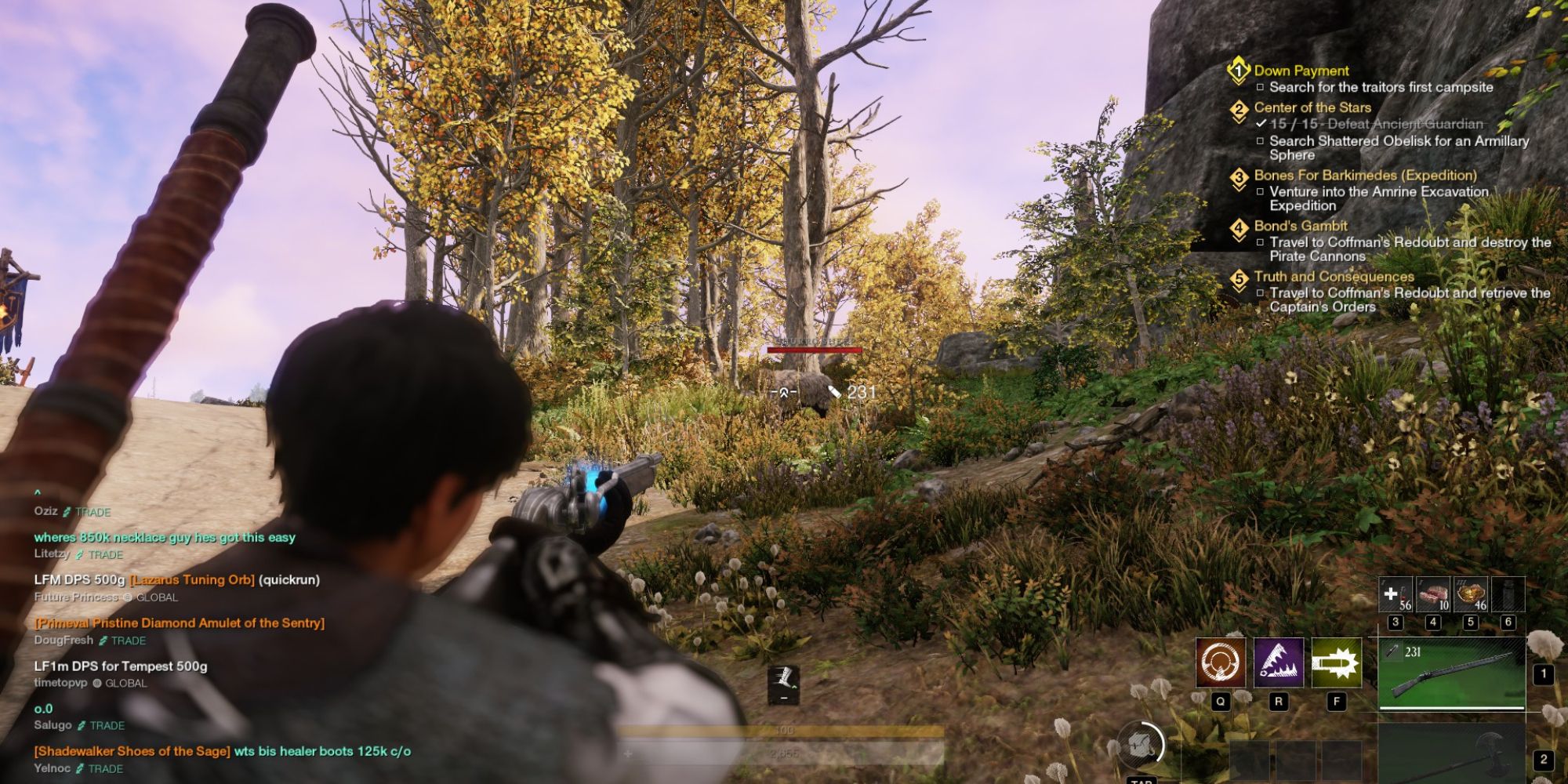 Very few MMORPGs have guns. Gamers love shooting guns, no matter the genre. This is a plus for New World, as you can obtain muskets in the game and go buck wild.

The sound design and feel of gunplay in New World are rewarding and enjoyable, so this adds a lot to the overall gameplay when comparing the two titles. 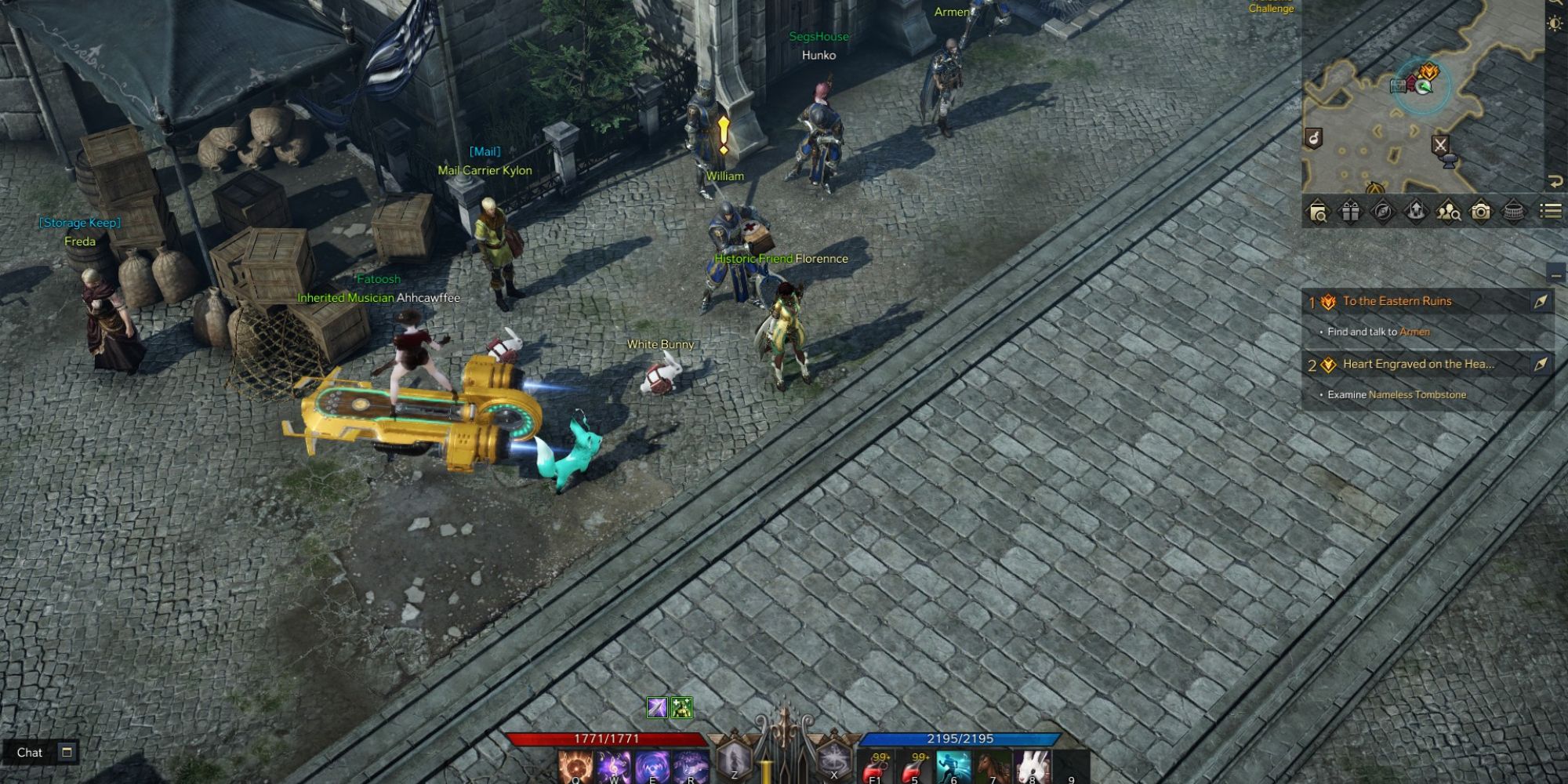 Lost Ark's user interface and general experience are more true to that of the MMORPG genre and other similar titles. The map, quests, and your class abilities are all designed in MMORPG fashion on your screen. You may be looking for something new, but it doesn't have to be so new that the general feel of the genre is gone.

Hundreds of players can be seen around you, and your various spells or powers are at your fingertips. You have to use the mouse to move your character, while all keyboard buttons either make you attack or act as shortcuts for other menus. In New World, you move around freely with WASD, whereas in Lost Ark, the WASD keys will have you killing enemies. 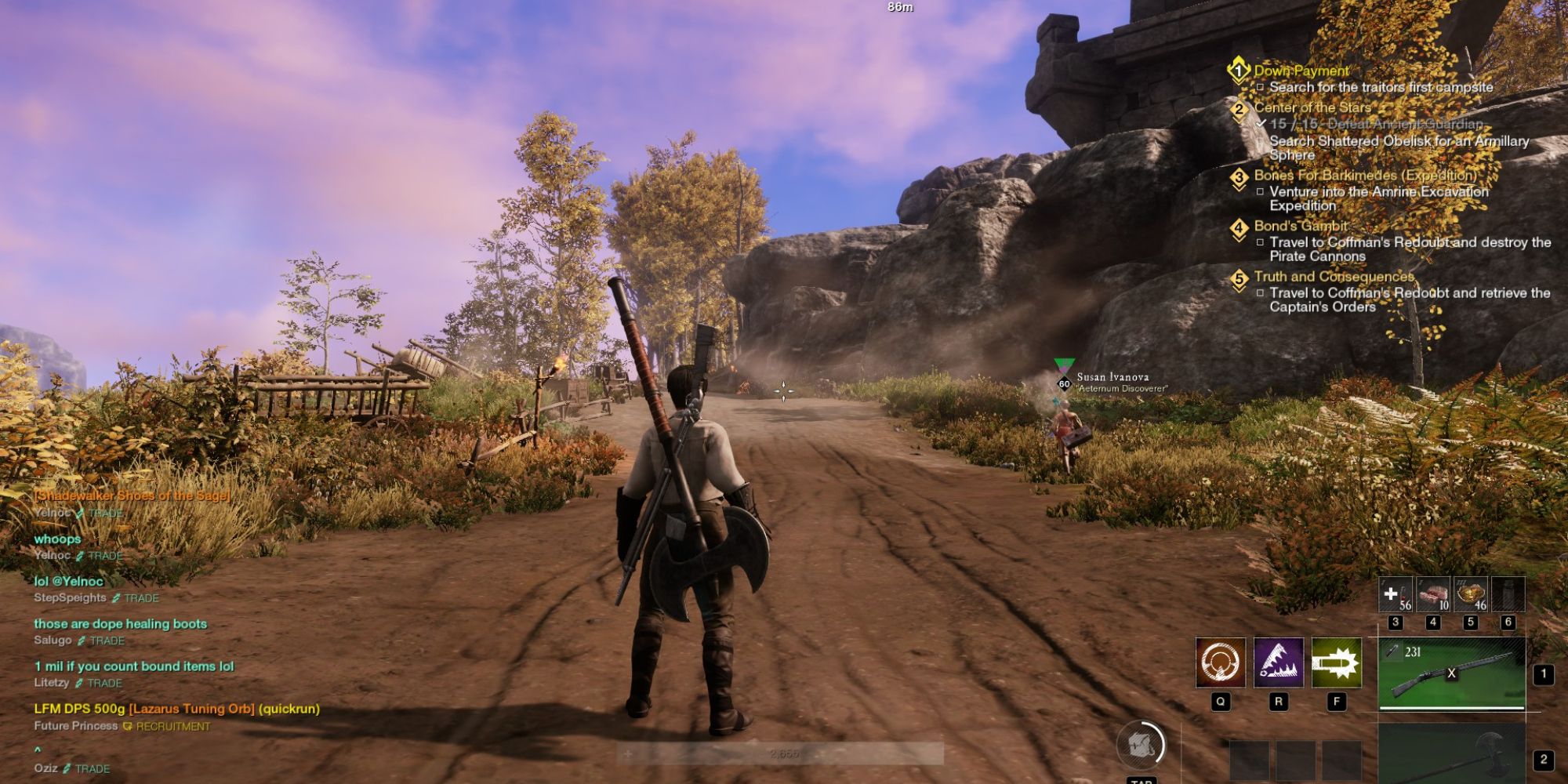 New World offers a completely different MMORPG experience than Lost Ark, that much is obvious. It starts with the fact that the game is in third person. You aren't viewing things from a birds-eye-view, where all other players can be seen running around you. Your abilities aren't even on the lower center of your screen.

The camera setup is more cinematic, making the game feel more like a single-player adventure game. That may entice you or dissuade you from trying out the game, depending on what you like. 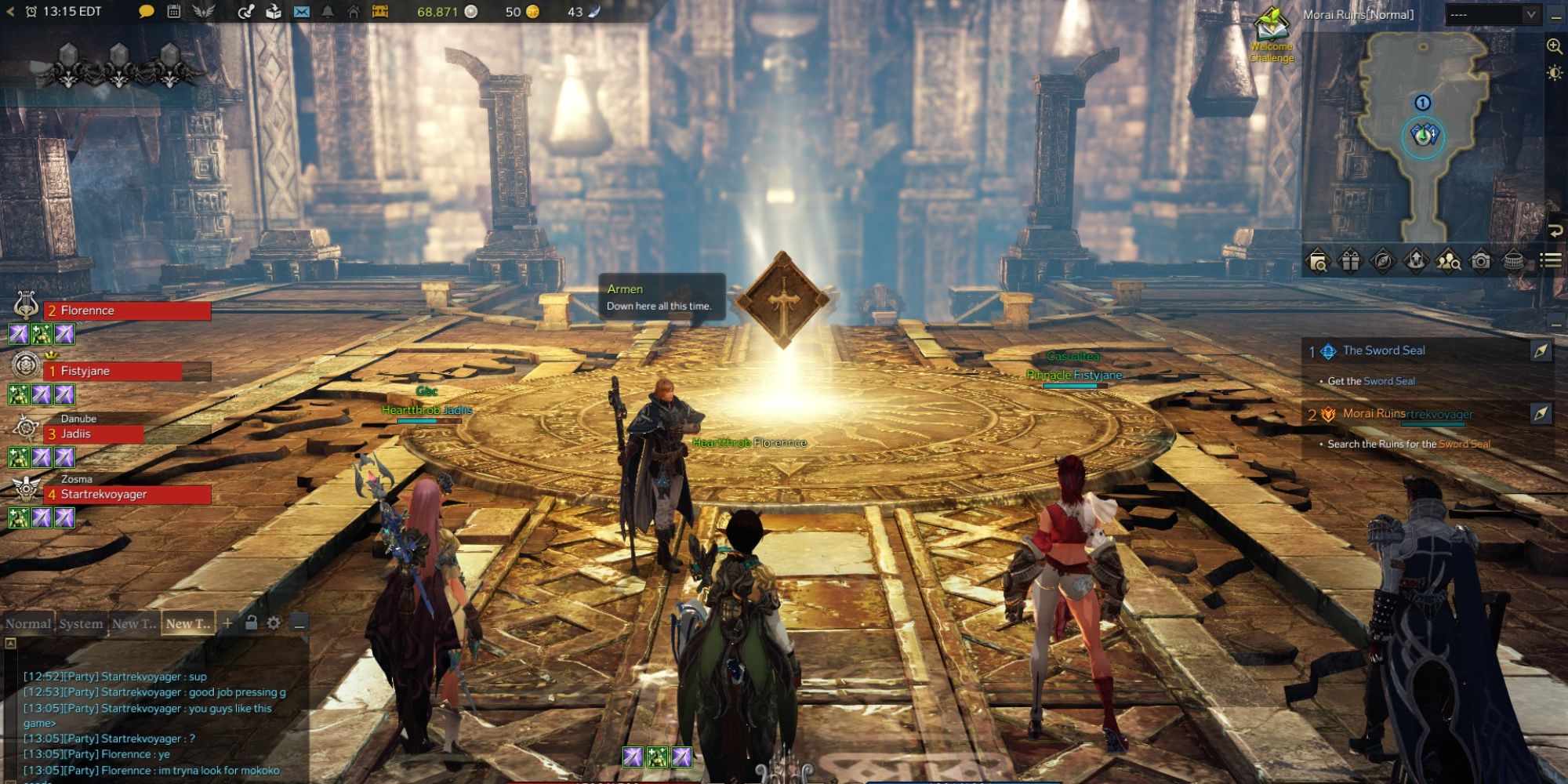 As soon as New World launched, there were many issues players faced. One of the major and still prevalent ones is the complex way to co-op the game with a friend. In New World, if you didn't start your character on the same server as your friend, you couldn't play with them. Not only that, but once you and your friend load into the game, you'll be spawned in opposite locations on the map.

With no mounts available in the game, you're left with walking barefoot across the country just to start co-oping. In Lost Ark, all you have to do is join the same server, switch channel instances, and party up. Grouping up in Lost Ark is classic and easy. 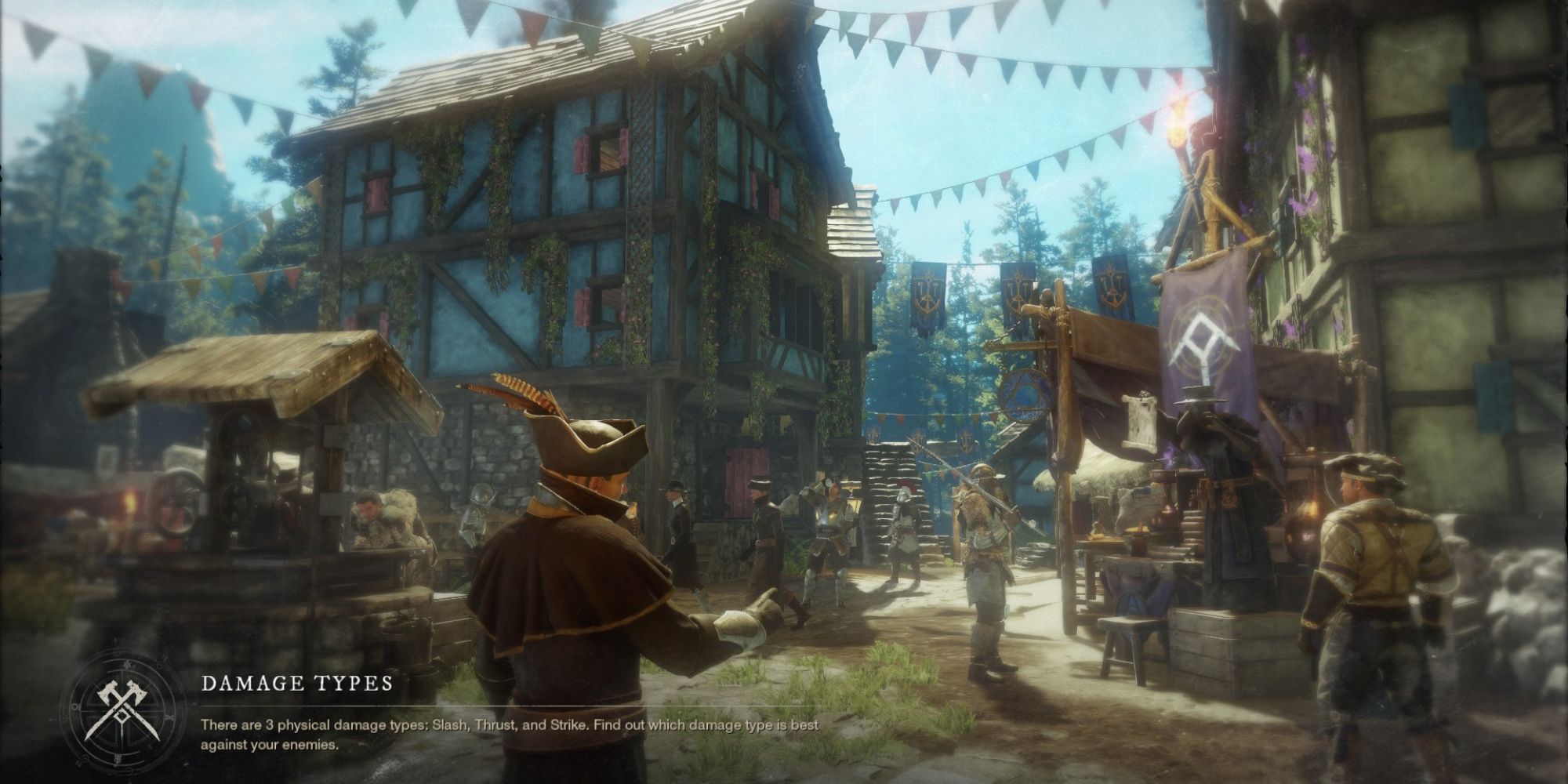 Another unusual sighting for an MMORPG is that New World is medieval-themed. Most games of the genre end up being fantasy games with elves and different races to choose from. In New World, everyone is a human trying to find their place in the world. While more laid back than an action-orientated and fantastical world, it all depends on which theme reels you in more.

Both games have great potential, but Lost Ark is your safest bet. Lost Ark stays true to the MMORPG genre in terms of UI, gameplay, and ease of access. It's also free. With New World, you're taking a risk on if something new is worthwhile. The game offers a different take on what we're used to, but for a price. It's largely run by Amazon themselves, meanwhile Lost Ark is only published by Amazon Games, not developed by them.

New World is currently struggling to stand on its two feet, with fewer active players each day, difficult access in terms of purchasing the game, and traveling in-game, as well as bugs. Lost Ark is able to keep the classic feel with a mix of styles, and fans are pretty happy with what has been created here.