Lost Ark’s Forge of Fallen Pride is the climactic Abyssal Dungeon of the main Yorn storyline, and is one of a few dungeons that is unlocked as tier two content. It's the second of two Abyssal Dungeons under the greater Ark of Arrogance dungeon (Road of Lament is the first one), the base level of which you run through as part of the main story quest line of Yorn.

Forge of Fallen Pride doesn’t have any adds of consequence to worry about (as is the case with most Abyssal Dungeons), but it has two bosses, both of whom have important mechanics to be aware of.

While their notable mechanics will be covered, their basic-attack patterns will not be due to their extremely low levels of impact in the fights.

How To Unlock Forge Of Fallen Pride 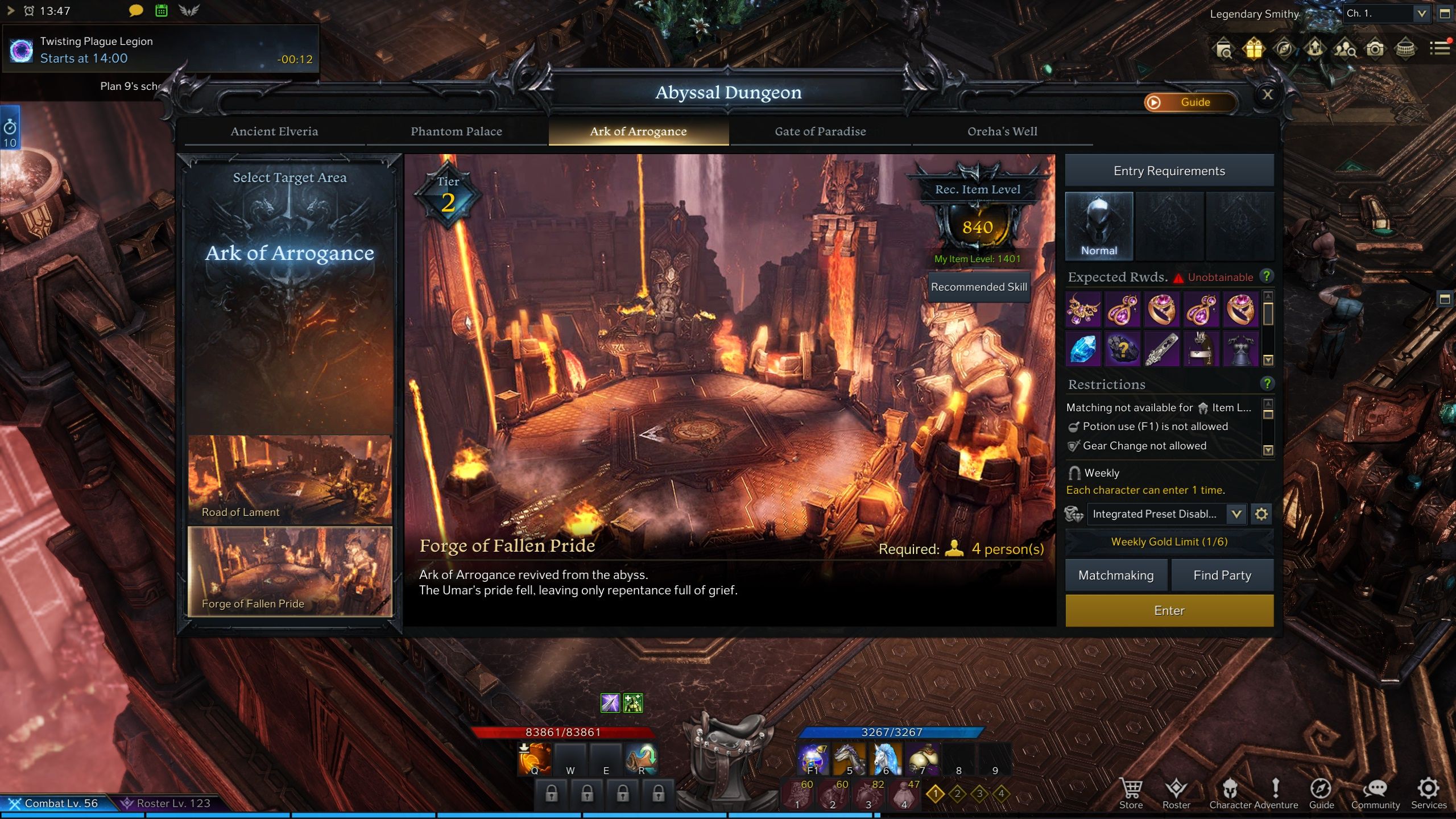 Similar to Road of Lament, there are three simple requirements (with one extra one) you need to meet in order to have access to the Forge of Fallen Pride Abyssal Dungeon:

Forge of Fallen Pride can reward tier two accessories, gear, ability stones, engravings, tier two tailoring and metallurgy books (for increased honing success rate), and card packs, but if your item level is 1,325 or higher, you will receive diminishing rewards.

You will not be able to gain metallurgy and tailoring books, gold, or engravings. And, while you’ll still get the tier two materials, they won’t be very useful on your tier three character, so the only reason you’re really running this dungeon at this point is for the card packs (or to carry a friend).

The Challenge Mode for Forge of Fallen Pride is on a rotation with the rest of the Abyssal Dungeons and will reward you with fitting loot for your tier level. All you need to be is level 50 and item level 960 to enter, and don’t think you can stomp through it at an absurdly high item level: the Scale of Harmony adjusts your item level to avoid such situations. 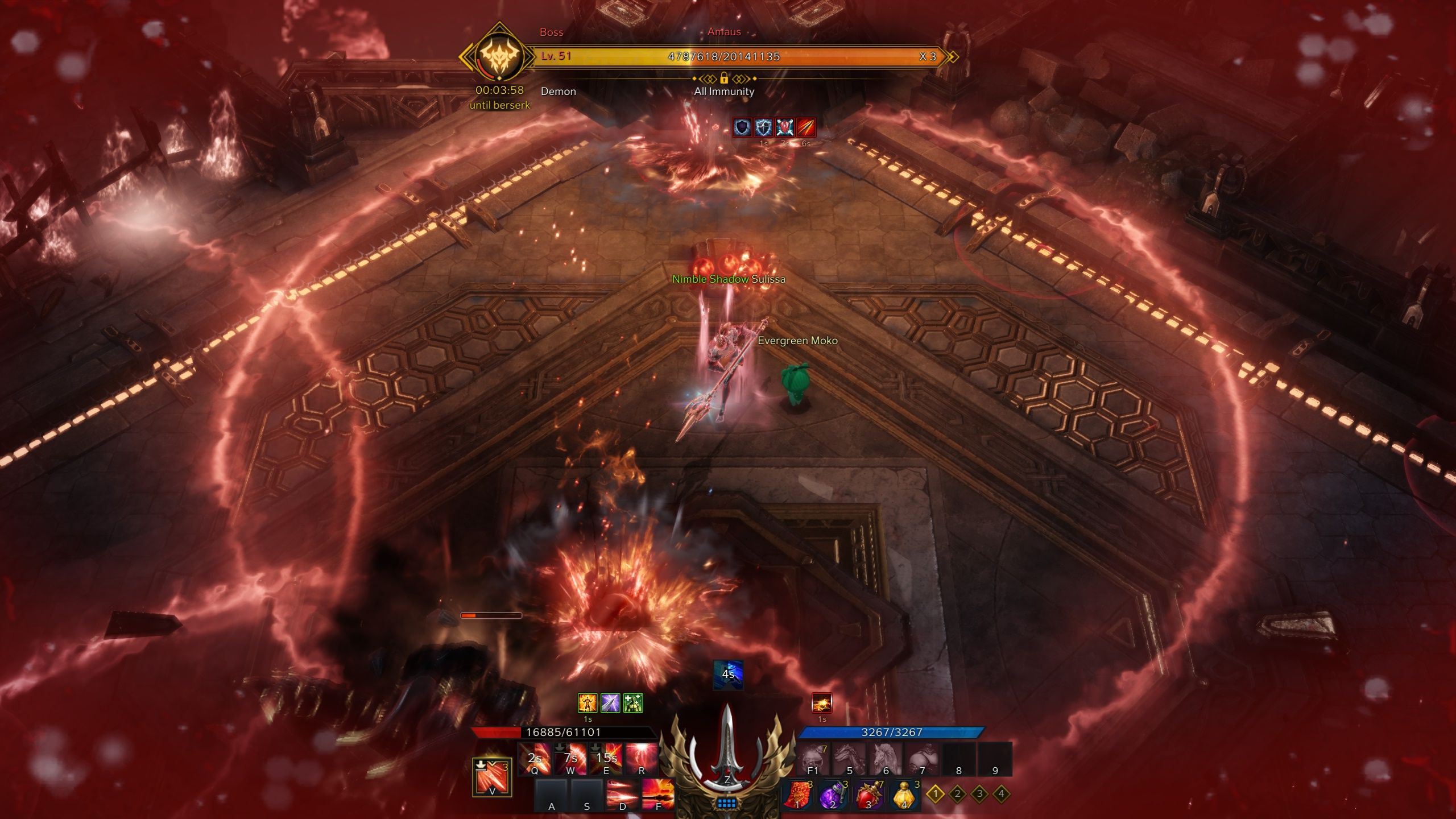 Amaus is the first boss of the Forge of Fallen Pride dungeon, and he is a refreshingly simple encounter with minimal things to do aside from dodging and killing.

While he has two important mechanics to go over, neither of them are one-shot mechanics, so take that sigh of relief.

It’s not the end of the world if he gets this buff, as even with the extra time it takes to get rid of this buff, you should still be able to kill him before he goes Berserk. 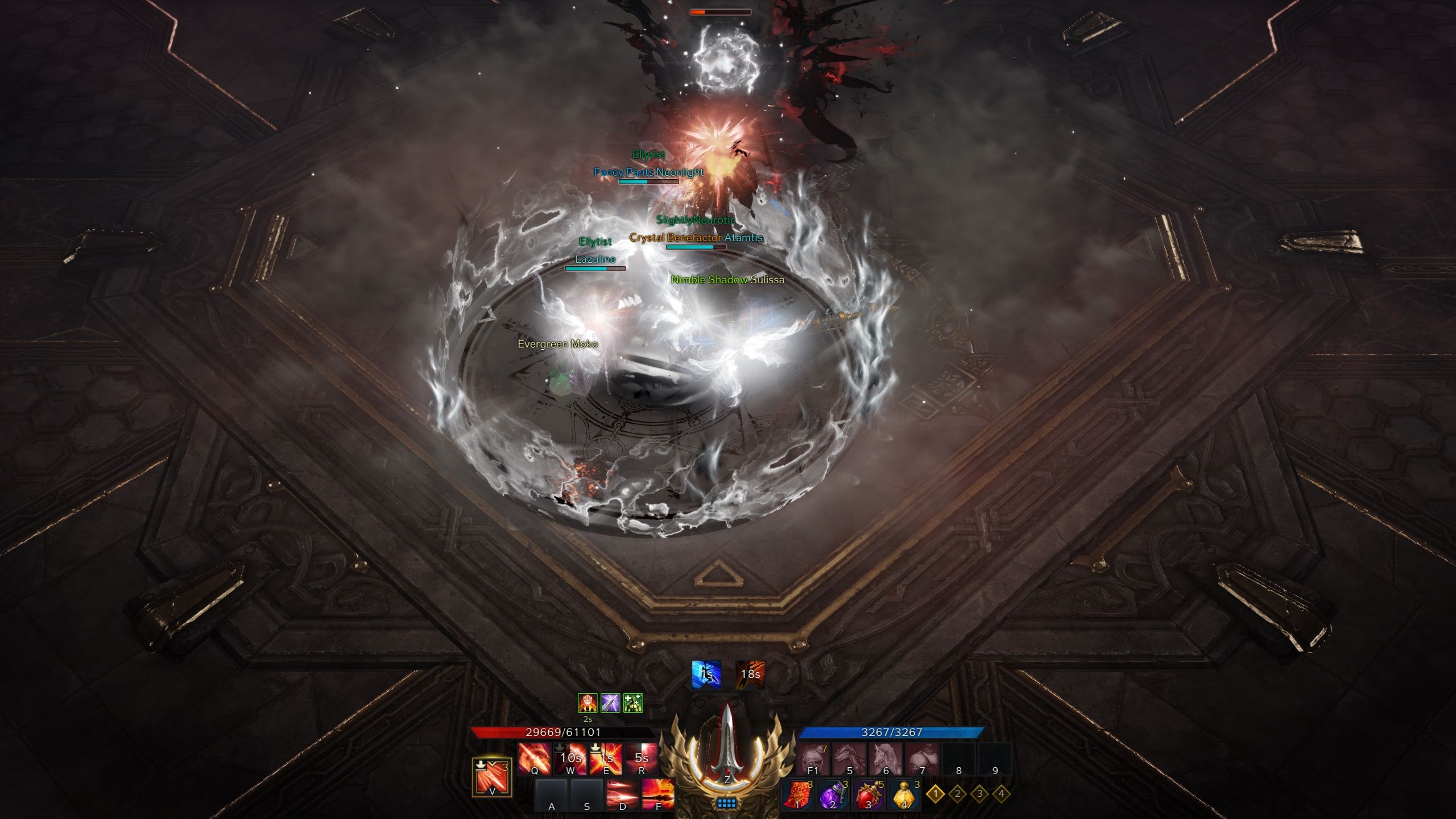 Kaishur is the second and final boss of the Forge of Fallen Pride dungeon. Like Amaus, Kaishur has two main mechanics to worry about, except one of his is, indeed, a dreaded one-shot mechanic that will wipe your entire group. 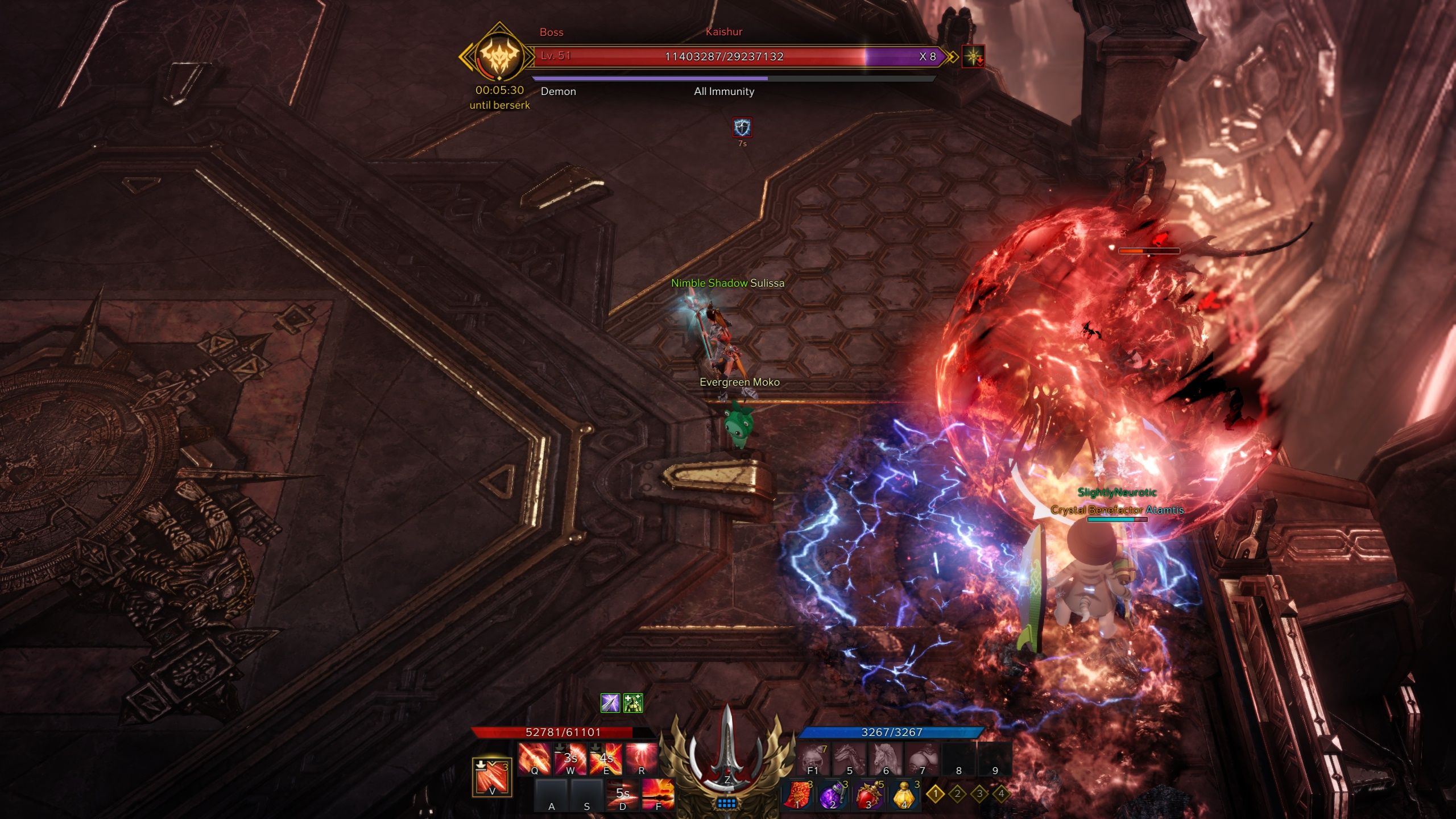 Let’s start with the mechanic that doesn’t wipe your party if failed.

Periodically, Kaishur will raise a defensive red shield around him. At this point, you and all your party members should stop attacking him until the shield goes away.

If he takes sufficient damage from your party while counterattacking, he will slap your whole group back with a very heavy-hitting strike. It won’t necessarily one-shot you guys, but it can certainly kill you if you’re not at full health. 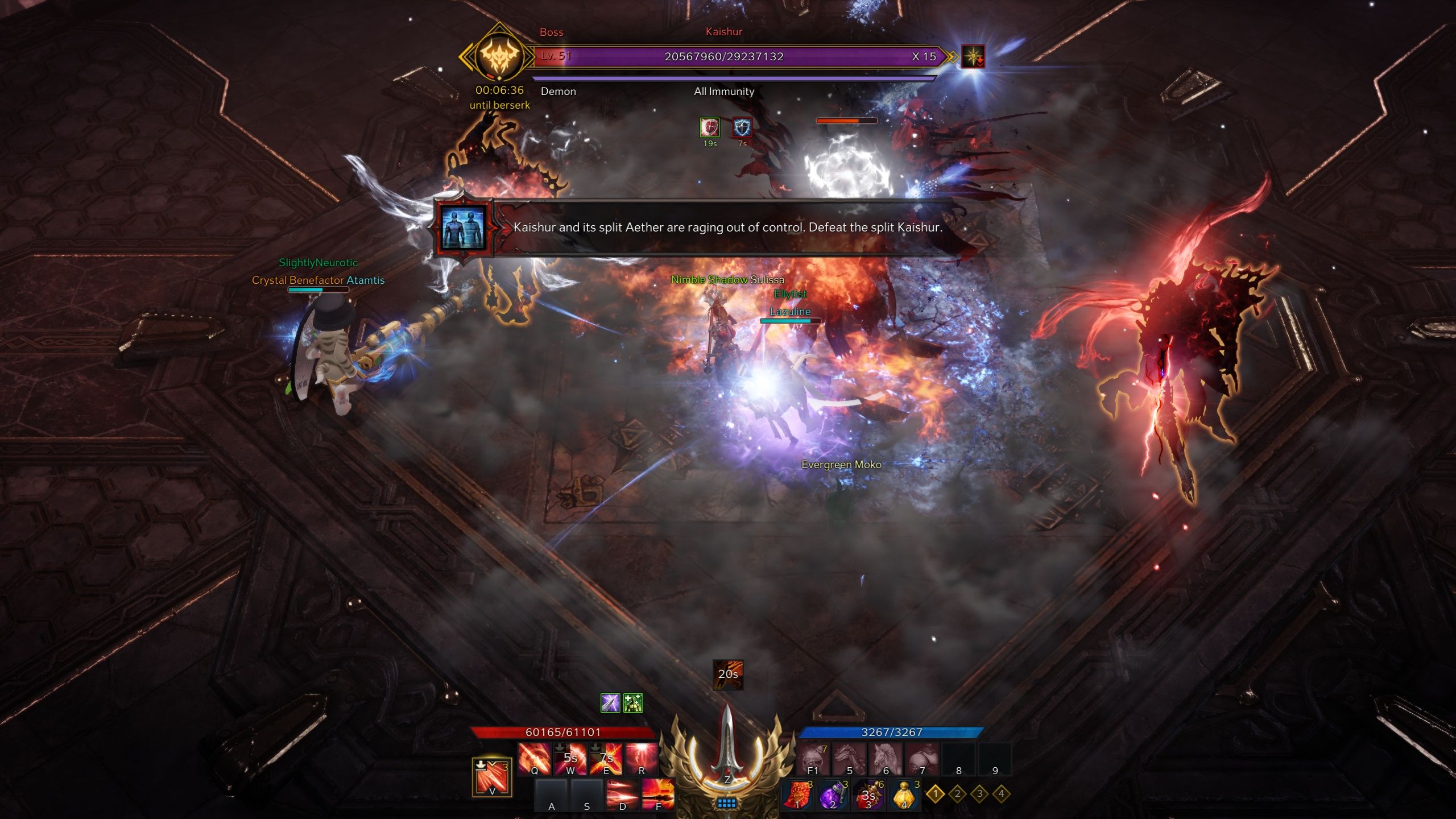 Let’s move on to his one-shot mechanic. Twice during the fight, once at his sixteenth health bar and once at his eighth health bar, Kaishur will move to the center of the map and start channeling his massive attack. When doing so, pay attention to the color of the orb he is holding up; it will either be red or white. At the same time, he will also summon two phantoms; one red and one white.

You must kill the phantom that corresponds to the color of the orb the central Kaishur is holding up, and you should do so fast. Once you kill the correct phantom, a circular safe zone will spawn on its corpse that all of you should stand in to prevent getting wiped.

Don’t worry about accidentally killing the phantom of the incorrect color. It doesn’t matter if it dies, so long as the correct one also does in time for Kaishur’s one-shotting shockwave. 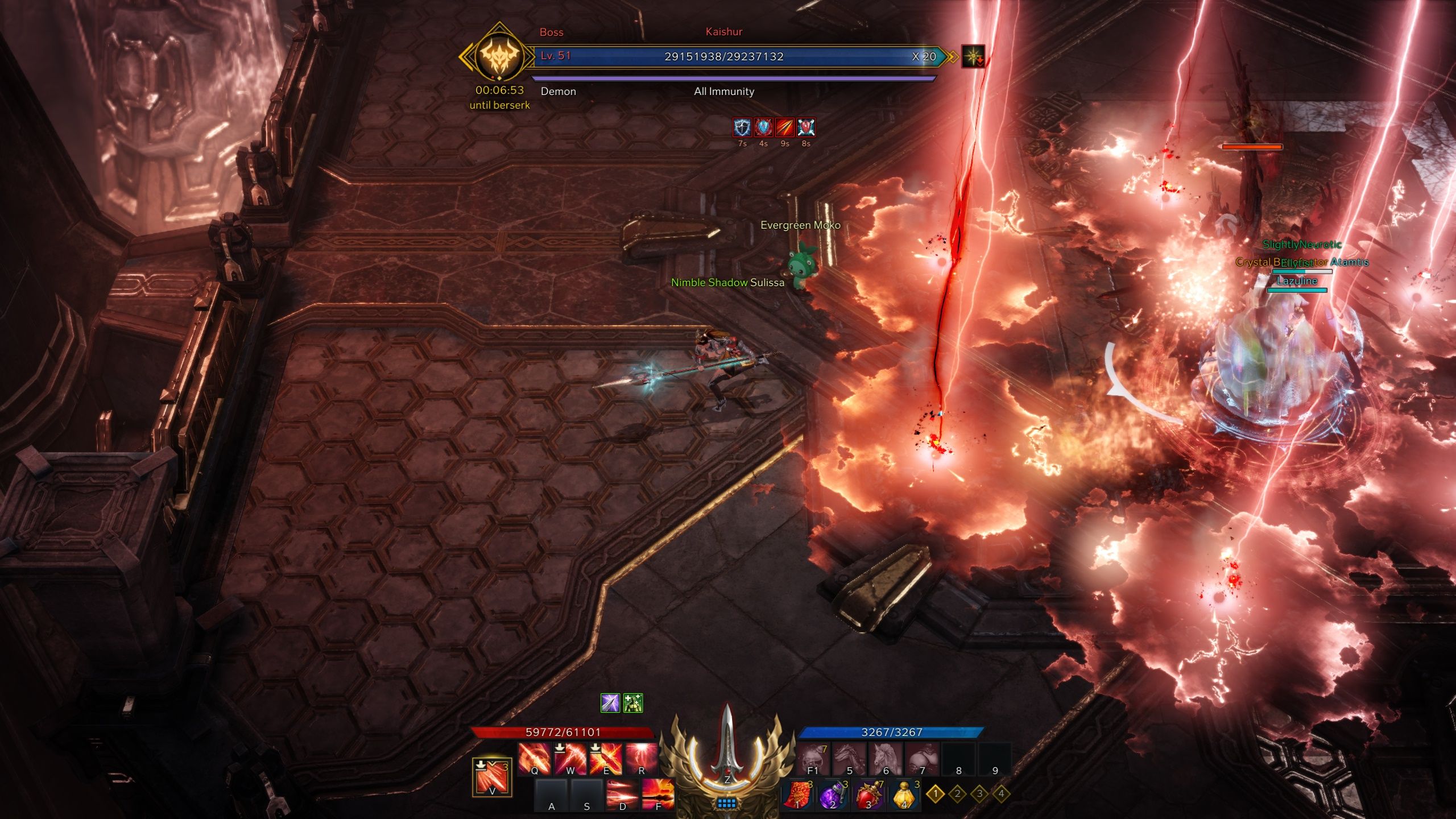 Outside these two mechanics, Kaishur is a pretty simple fight. His basic attack patterns don’t hurt too much, but he’s got a couple that can cause you some problems. Furthermore, most of them are enhanced if he’s low on health, so let’s pick out some of them.

While his basic attack patterns won’t one-shot you, it’s worth prioritizing dodging them over damaging the boss, since his counterattack and stagger check can both kill you if your health bar isn’t full.