You are here:
Home / Legends Of Runeterra: The 10 Best Targon Cards In World Ender

Legends Of Runeterra: The 10 Best Targon Cards In World Ender

Legends of Runeterra’s latest expansion, The Darkin Saga: World Ender—named for the World Ender himself, Aatrox—has brought the Darkin Saga to its conclusion. But while Aatrox is a Runeterran Champion, Targon was actually the region that got the most cards, most of which are centered around the new Empowered keyword, including their own Champion, Kayle.

However, getting more cards doesn’t necessarily mean those cards will be impactful. As a result, you might wonder how powerful Targon’s new cards actually are. Well, this list is here to help. Here are all ten cards Targon received in World Ender, ranked by which are most worth including in your next deck. 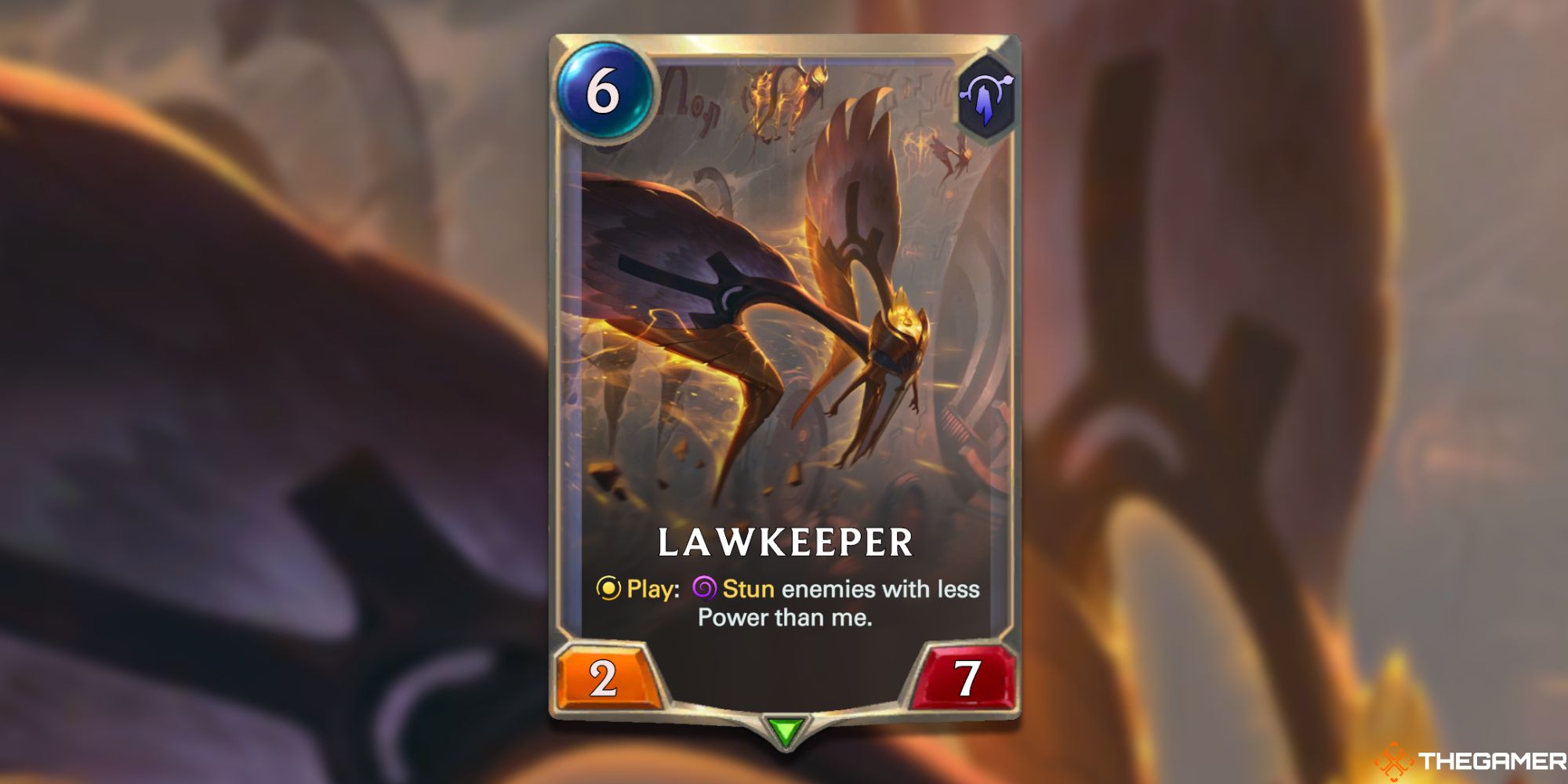 If you can boost Lawkeeper’s power enough to Stun your opponent’s entire board, it can have a powerful (and frustrating) effect on the game. However, in its base form, the Lawkeeper's low power means you probably aren’t going to get much use out of it.

And six mana is a high price for an effect that you need to invest other cards and buffs into making work. Most decks will have better, less complicated ways to deal with opposing boards that they can turn to instead. 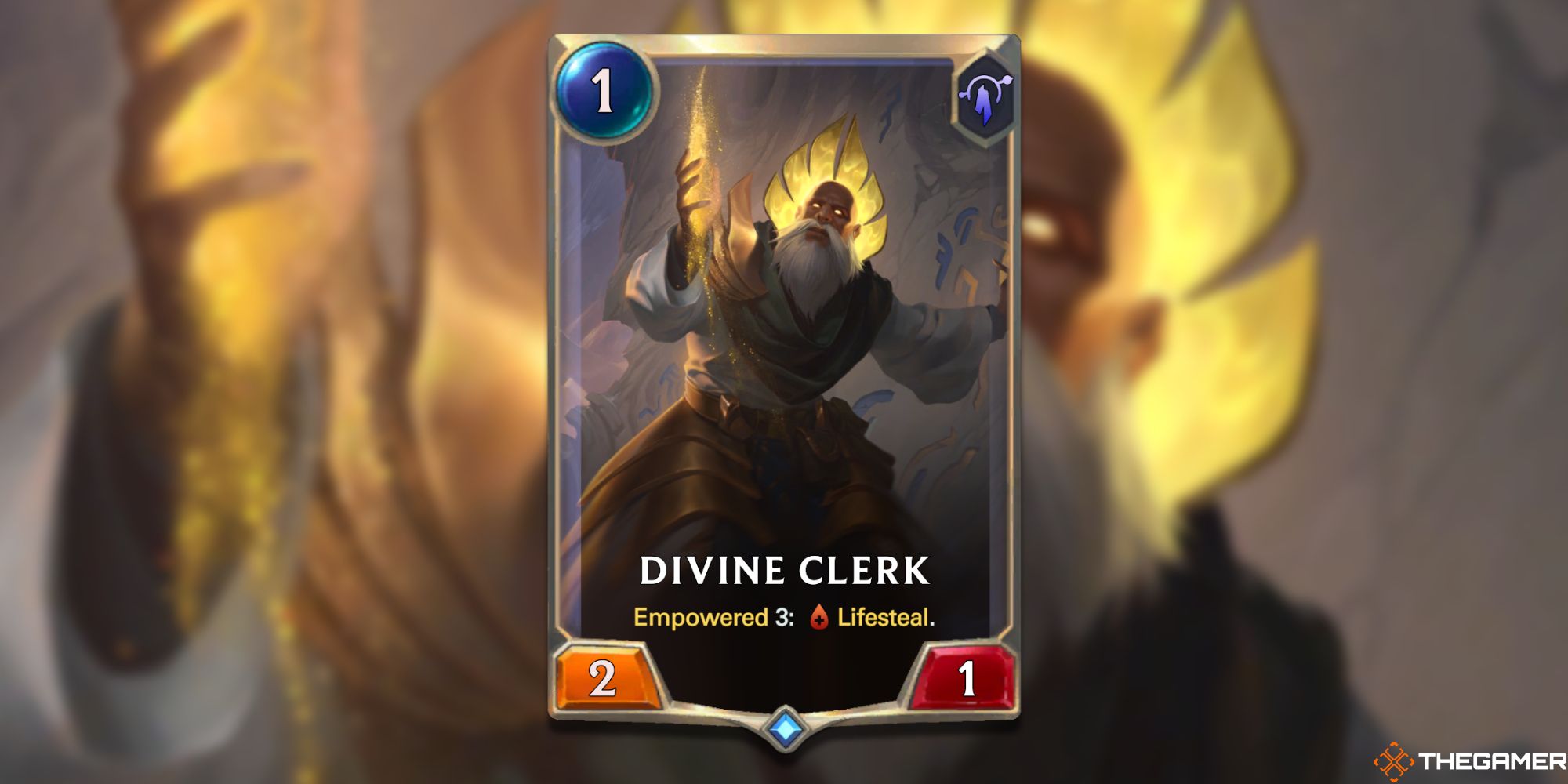 Divine Clerk is a card that can best be described as “uninspiring.” A 2/1 for one mana is not the sort of card you would include in your deck by itself. The Clerk does have the new keyword introduced this expansion, Empowered, which triggers when an ally reaches a certain amount of power. For the Clerk, its Empowered keyword triggers once it has three power, a relatively simple condition to meet.

And in this case, you get a fairly simple reward: Lifesteal. That isn’t a bad keyword to get, but it’s probably not going to win you any games when attached to a three-power follower. Still, the Divine Clerk can be a decent early play that can be a real nuisance against aggressive strategies. 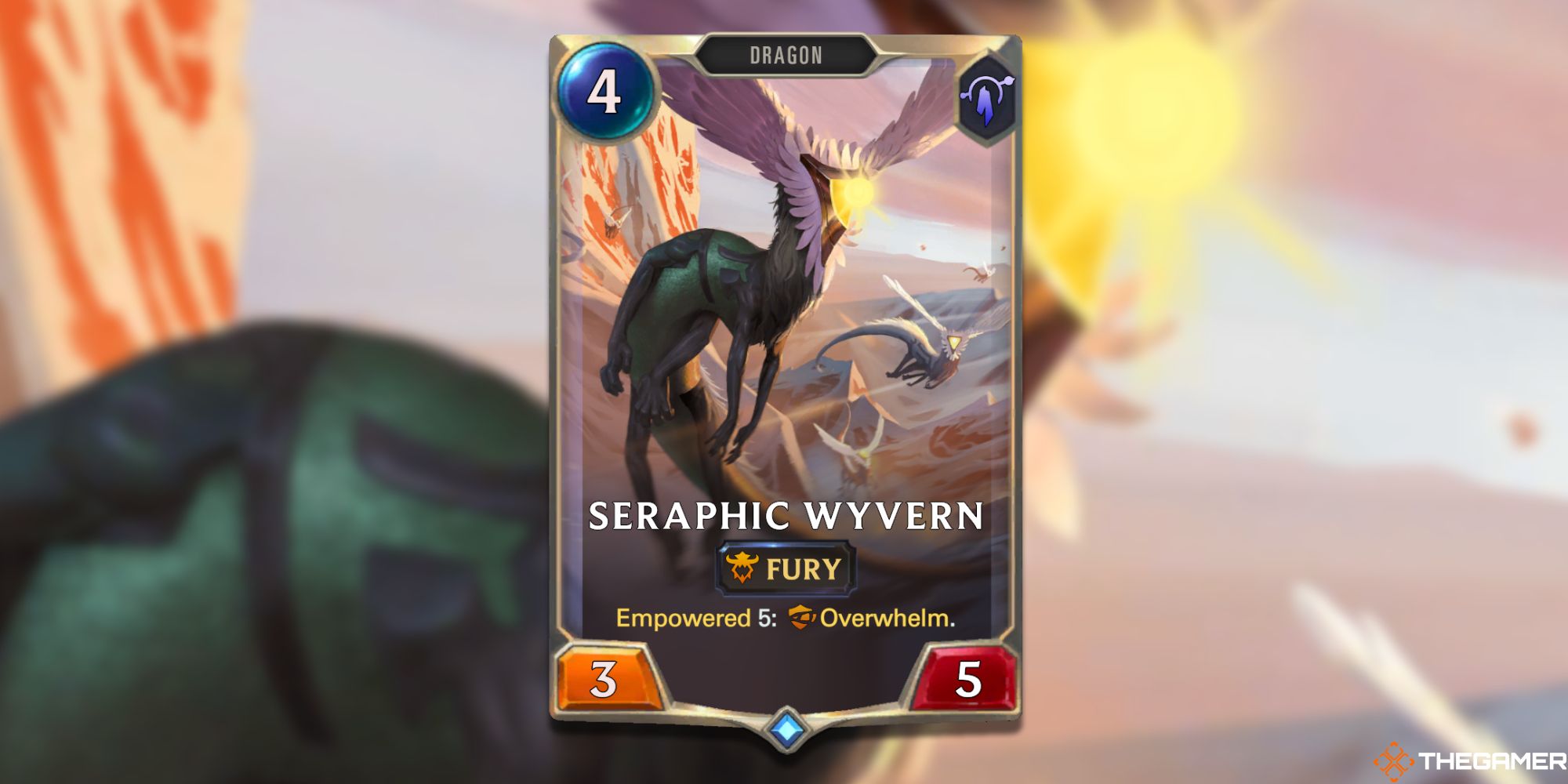 Seraphic Wyvern is a Dragon, giving it some potential synergy with cards like Shyvana, but it’s also a solid card in its own right. Like many Dragons, the Seraphic Wyvern has the Fury keyword, which allows it to gain 1/1 in stats each time it kills an enemy.

Thanks to that ability (unlike many Empower cards) the Seraphic Wyvern can actually trigger the keyword’s effect all on its own. And once it does, it gets Overwhelm, allowing those extra stats become even more effective. If this card isn’t answered, it can sometimes end games by itself. As a result, it can slot into any midrange Targon deck looking for a follower to play on four mana. 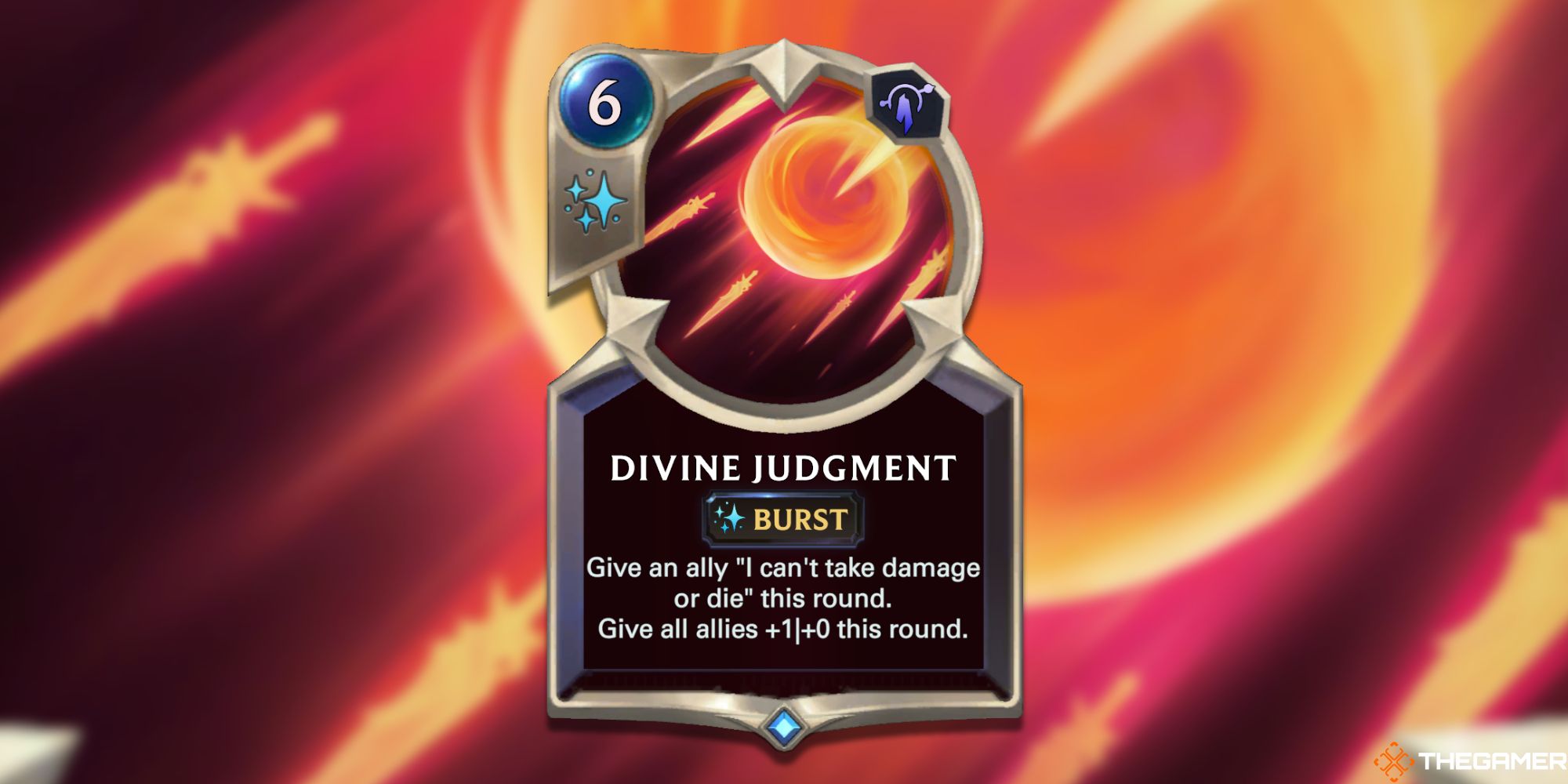 Divine Judge essentially gives one unit a version of Barrier that lasts for an entire turn, instead of blocking a single instance of damage. You could also compare it to Spellshield, although this effect is worse against effects that neutralize your allies without damaging them, like Freezes or Stuns. And as a bonus, Divine Judgement also gives your other allies a slight boost in power.

The card is quite expensive though, and it might not make the cut when cheaper options exist that grant you a similar—if slightly weaker—effect, at a much lower cost. 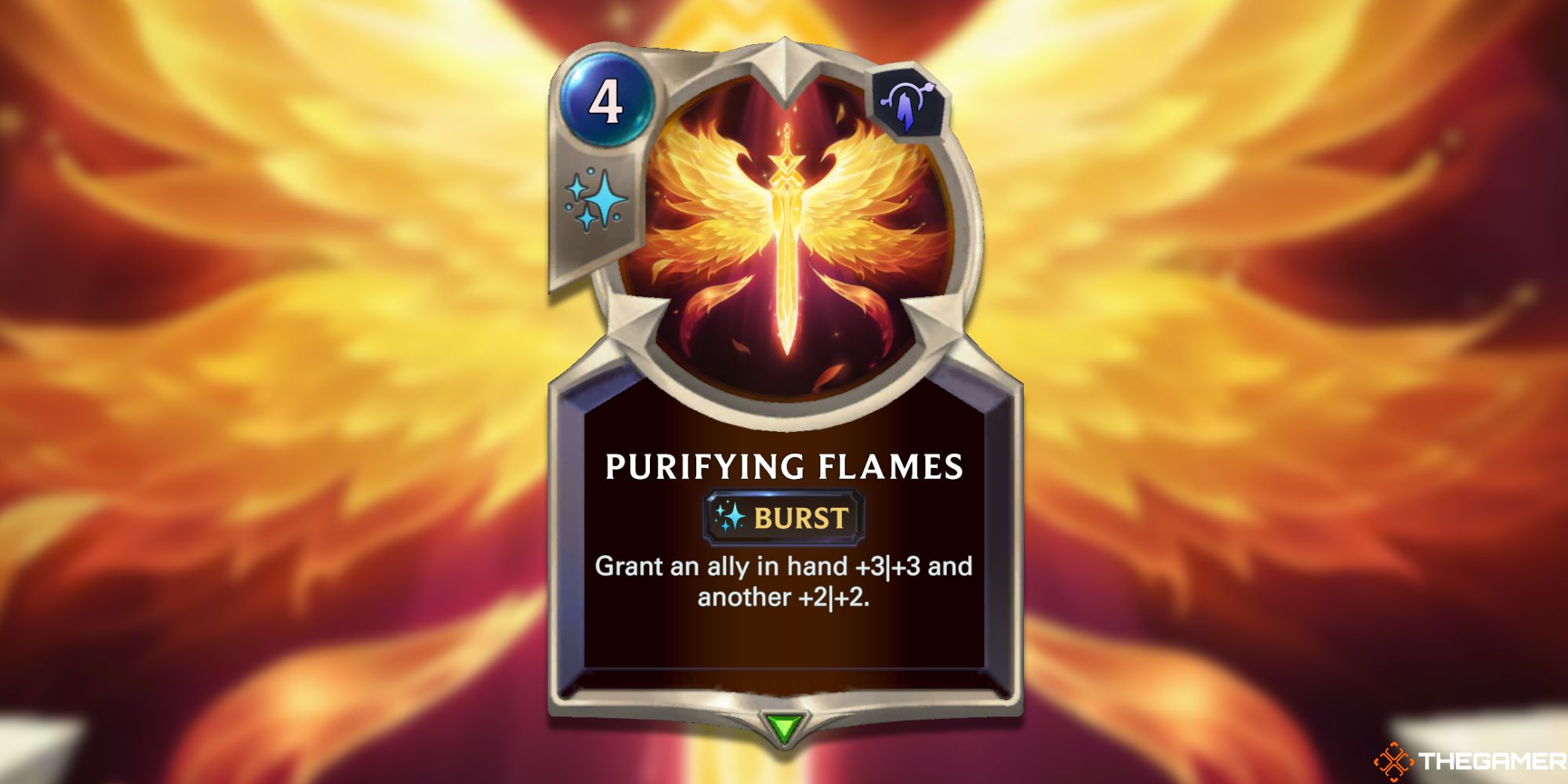 Purifying Flames gains you 5/5 in stats, but some of them are delayed. Being able to cast it at Burst speed, though, means it can be used as a combat trick while simultaneously increasing the strength of your future plays.

And while getting stats is almost always good, the delay in getting some of them is a real downside. However, the new Empower keyword means buffs like Purifying Flames will trigger powerful bonuses for your allies, whether you’ve played them already or if they’re still in your hand. 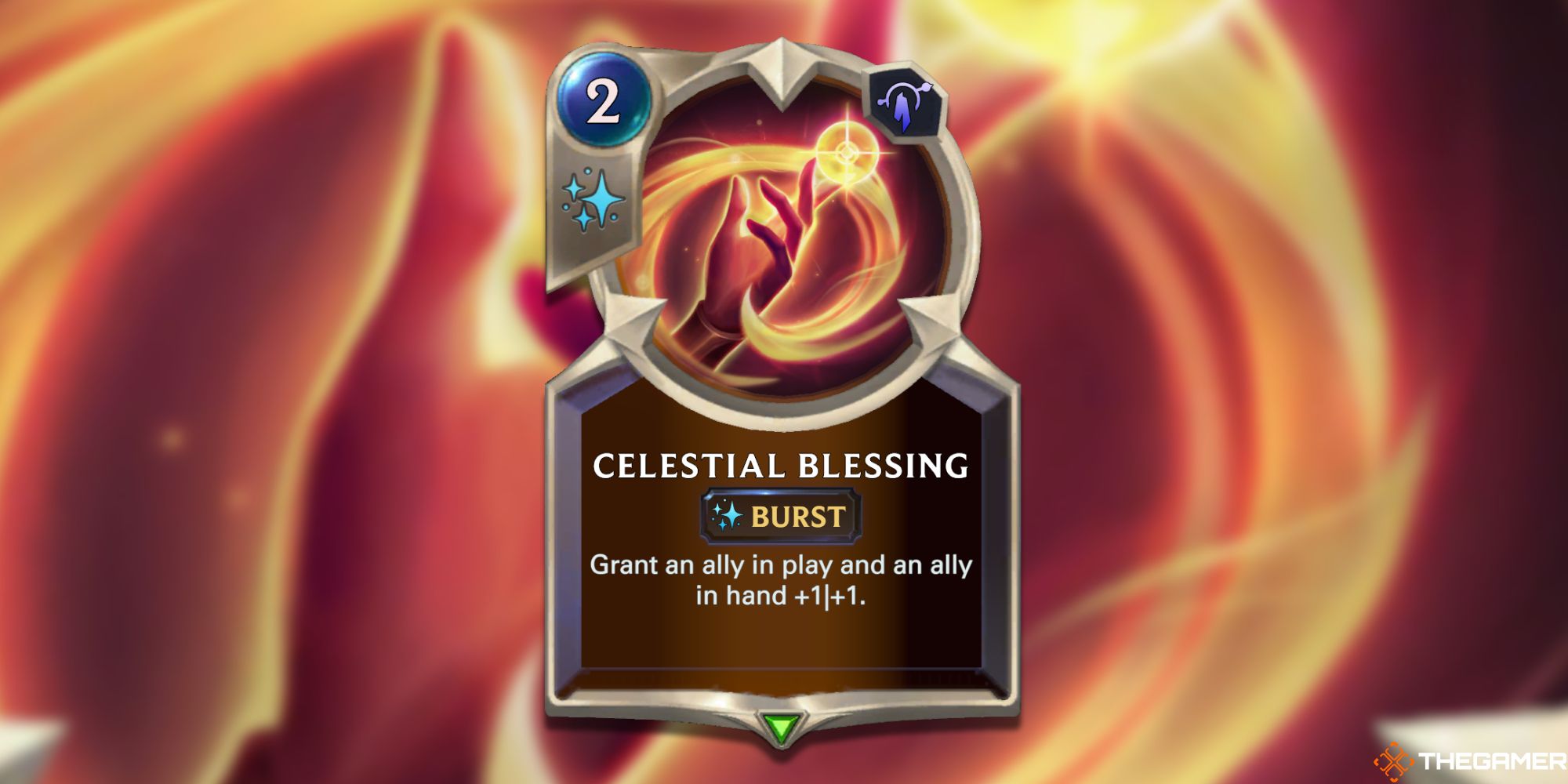 Celestial Blessing is a cheaper, but less powerful, version of Divine Judgement. It has all the same benefits and downsides of its more expensive sibling: it allows you to buff your allies on the board in combat or to save them from damage, and to boost units in hand preemptively.

However, the cheaper price tag is a real advantage. Some decks will run both cards, but if your deck only has room for one, you’re probably better off going with Celestial Blessing, as it is the more versatile option. 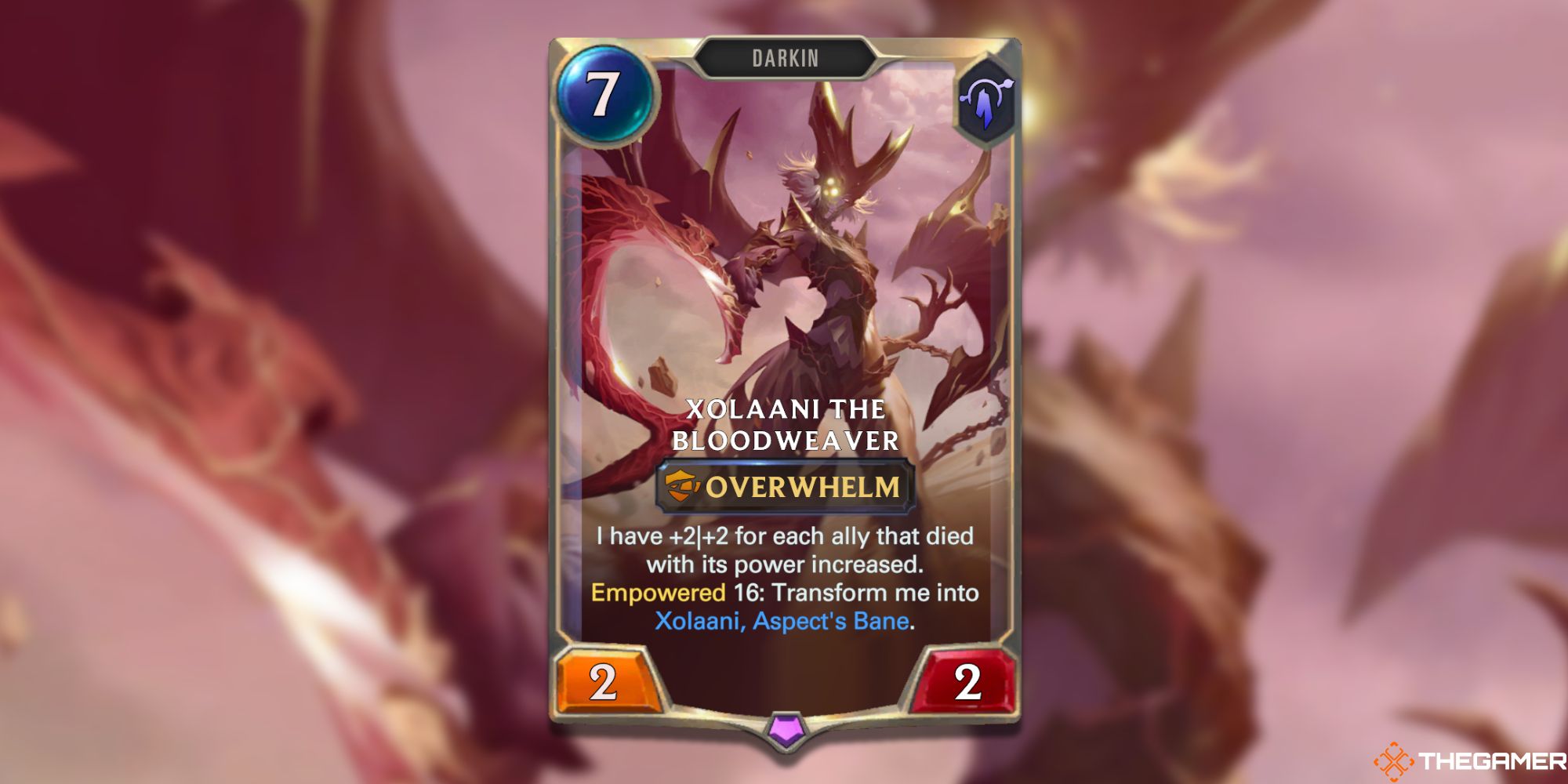 Xolaani the Bloodweaver is a finisher. She's going to be played in decks that frequently buff the power of their allies, and it doesn’t take many activations for Xolaani to become a real problem for your opponents. If you’ve had three such allies die, she becomes an 8/8 with Overwhelm, which can end games if your opponent is already under pressure from your other buffed allies.

And once you trigger Xolaani’s Empowered effect, and transform her into Xolaani, Aspect’s Bane, she will turn your other allies into giant monsters that also have Overwhelm. That might be difficult to do in many cases, but if it happens, the game will end shortly afterwards. 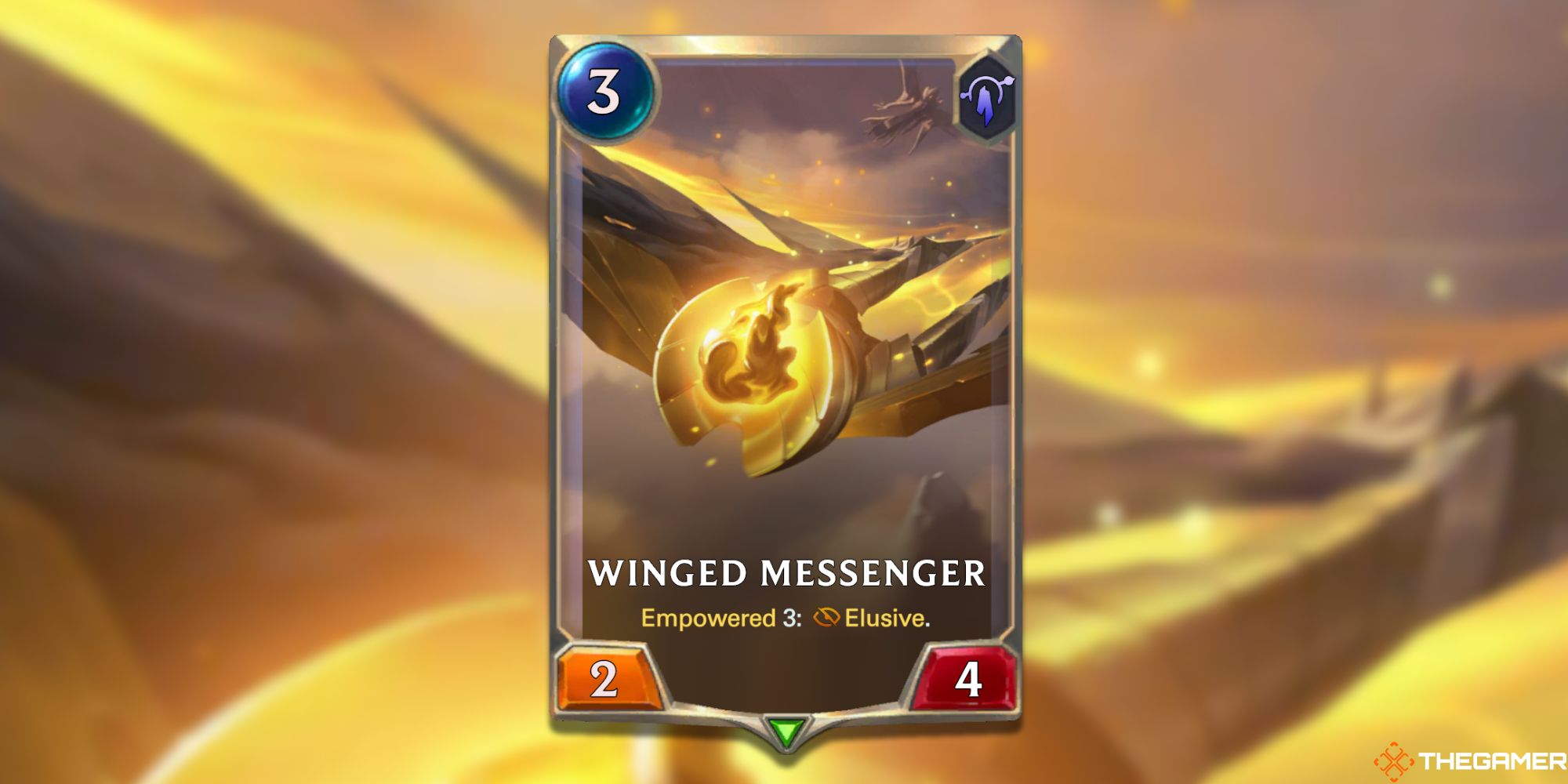 All you need to do to trigger the Winged Messenger’s Empower effect is to grant it one power. Doing so isn’t all that difficult in Targon, and, unlike the Divine Clerk, the reward is exceptional: once it hits three power, the Winged Messenger gets Elusive, arguably the most dangerous Keyword in Legends of Runeterra.

It’s not the most exciting card, but any card that has Elusive is a potential threat, especially one that has a high enough Health total that your opponent can’t easily remove it with a cheap Spell. 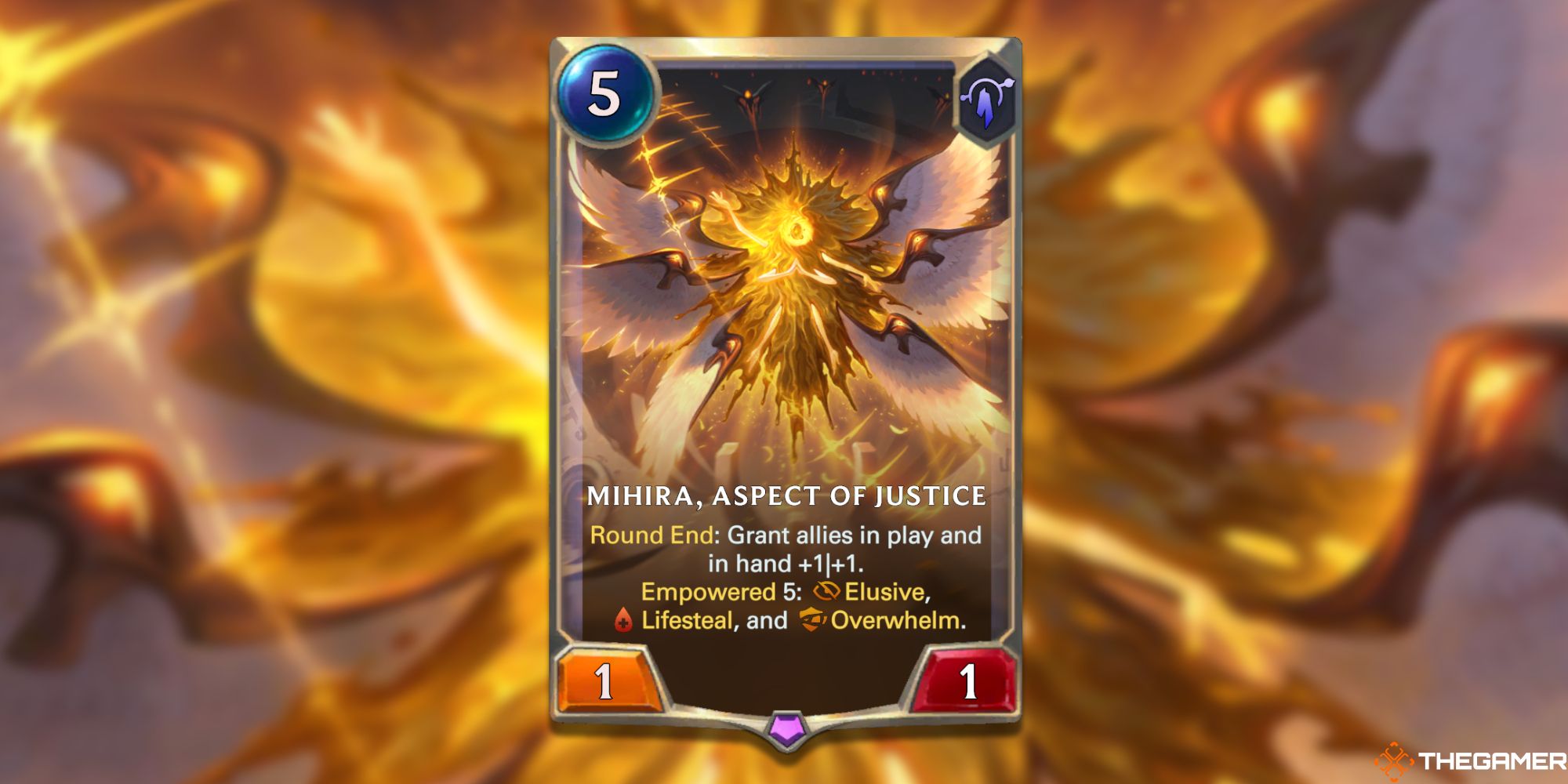 A 1/1 for five mana sounds like a terrible deal, no matter how strong its effect might be. And it is true that Mihira, Aspect of Justice can be killed fairly easily if your opponent has any sort of removal. But if they don’t, they are going to be in serious trouble very quickly as you slam down buffed allies until they are overwhelmed.

And once you’ve buffed Mihira enough, it will itself be a threat. Elusive will usually make Overwhelm redundant (although the combo can be useful in specific circumstances), but combining it with Lifesteal can help you come back against aggressive decks that have been wailing on you while you were waiting for its stats to increase. 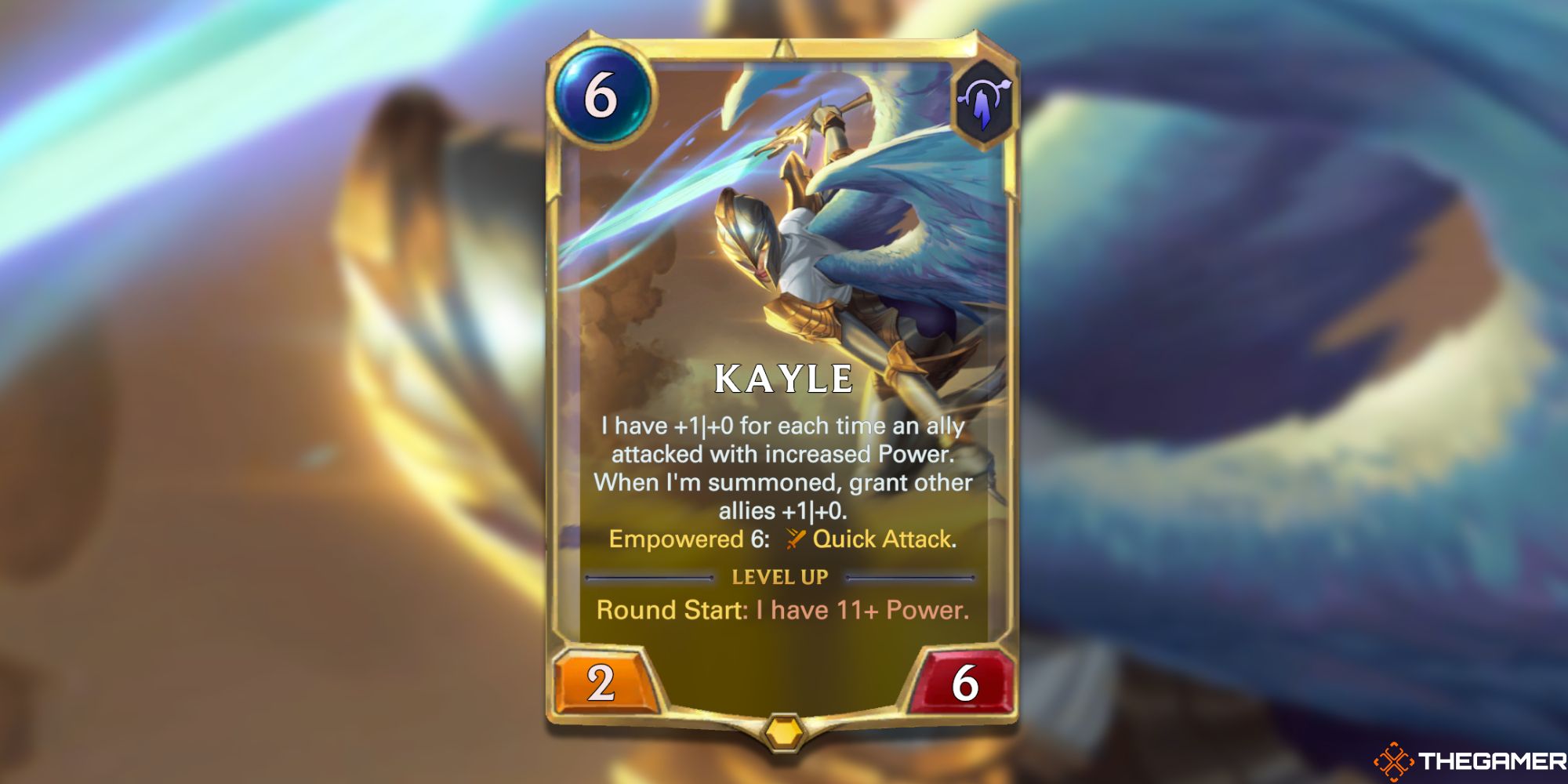 Kayle’s ability is versatile enough to be run in many different decks. Targon has a lot of ways to increase the power of its cards, but so do other regions like Demacia or Shadow Isles. And as you buff your other cards (something you wanted to do anyway) Kayle grows in strength, triggering her Empower keywords and leveling up.

In her final form, the combination of Overwhelm and Double Attack will end the game instantly if she’s allowed to attack unhindered. If the deck you are playing is running a significant number of buffs, Kayle becomes an appealing inclusion.