You are here:
Home / League of Legends: Rell Vs. Leona – Who Is The Better Support?

League of Legends: Rell Vs. Leona – Who Is The Better Support?

In League of Legends, tank supports are the bassline of any solid team composition. While other roles can fulfill the job of tanking, supports tend to be able to truly succeed at it without sacrificing potential damage. After all, a damage-dealing support won’t be able to put out the kind of DPS necessary to carry. The most iconic support players in competitive play are known for their prowess on tank support champions.

The role has many options. One of the most prevalent is one of their newest champions: Rell. Rell contains a ton of options as a pick and offers skill expression to competent support players. However, there’s something to be said about her reliability. One champ she was compared to on release was Leona, a staple tank support who tends to be more popular in solo queue. Both champs provide different strengths and weaknesses, but which one is better?

10 Rell Is Better: Engages From Many Angles 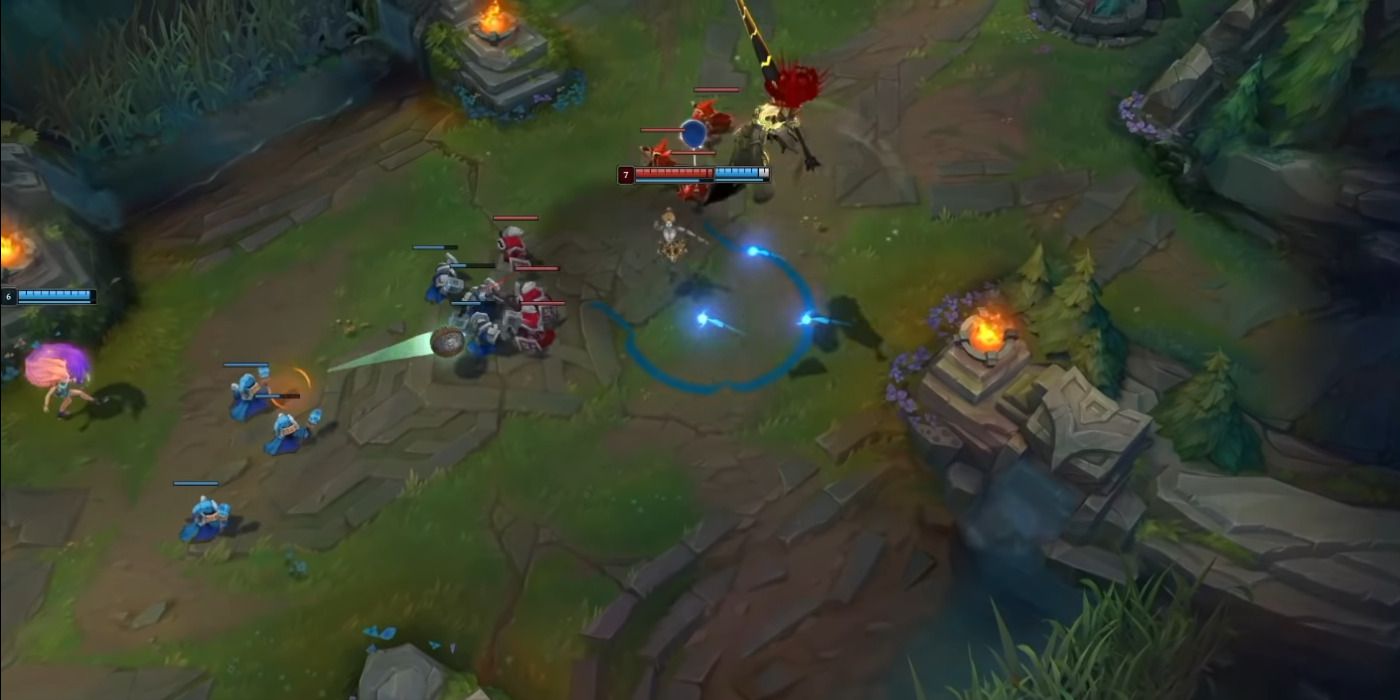 Rell, like other tank supports, has much of her power budget loaded into her engage power. However, when compared to Leona, Rell has a lot of variety in how she can initiate fights. With her two different forms, she is given two different methods of taking an engage opportunity.

Her most obvious method of engage comes in the form of Ferromancy: Crash Down. She leaps to a target location, knocking up enemies that are caught in the attack. This can be then comboed into a couple of different abilities. However, with Mount Up, she also is able to surprise enemies with a fast, single-target engage tool that flips a target backward. Either way, she can take many more angles into a fight than Leona is able to. 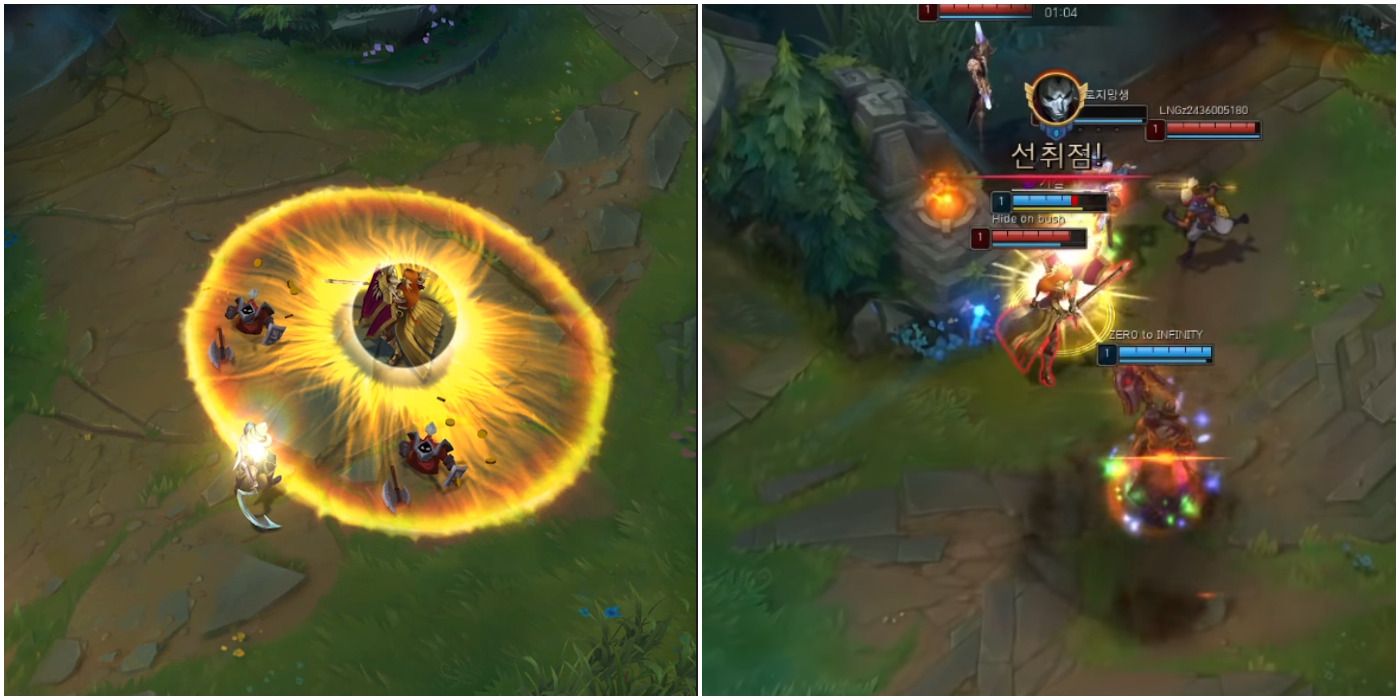 While Rell may have a lot of variety in taking fights, she’s very much reliant on her lane partner to get anything done. Her damage is far from impressive, and even with Ignite, she’s unable to secure kills in laning without help. This is what’s expected of a tank support in most cases. After all, it would be absurd to get run down by a support at level 3, right?

Leona, on the other hand, has a ton of surprising burst loaded into her kit. The base damages on her basic abilities is nothing to disrespect, and as long as her lane partner participates for just a moment, the Sunlight passive procs start to add up. With Ignite, it’s very easy for Leona to send an enemy ADC back to the fountain. 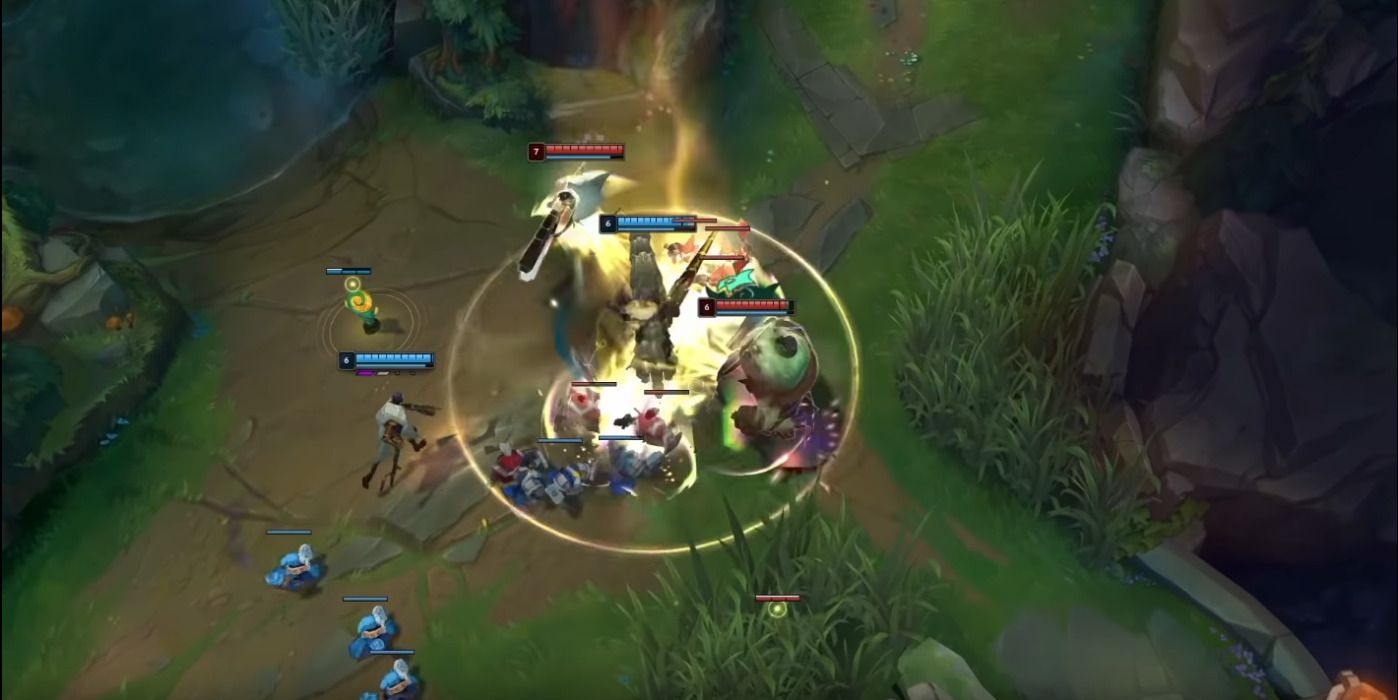 Rell’s bread-and-butter is disrupting team fights right from the start. Her primary CC tools, aside from Mount Up’s flip, are all AoE. Crash Down can hit an entire team in a choke point, catching them off-guard. This can be followed up by both her stun, Attract and Repel, and her ultimate, Magnet Storm.

Attract and Repel stuns targets around both Rell and her tethered partner, along with anyone caught in the line between them. Magnet Storm, while initially underwhelming, can ruin an entire team fight with ease. It drags enemies towards her, keeping certain prime targets out of the fight. She’s a breaker of any well-laid plans. 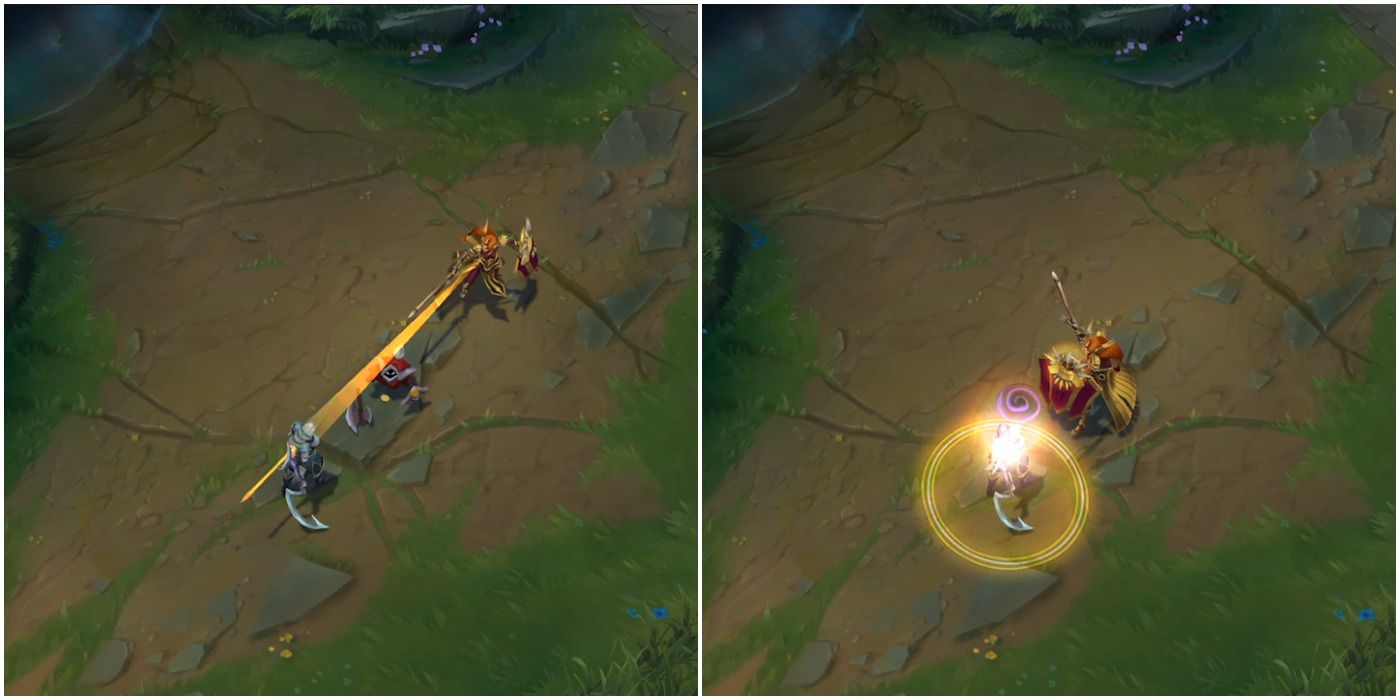 Leona’s ultimate, Solar Flare, is also capable of hitting an entire team. However, the hitbox for the ability makes landing that stun unreliable on large groups. Fortunately, it can be brought into the mix of Leona’s regular combo and help aid her biggest strength: single-target lockdown.

Leona’s base kit is loaded with CC abilities. Her Zenith Blade roots for a short period of time, locking a target in place as she dashes to them. This leads into a Shield of Daybreak stun, adding another second of CC. Finally, she unleashes Solar Flare, stunning her target for another 1.5 seconds. At max, Leona can lock a target down for 3 whole seconds, more than long enough to remove them from a skirmish.

Leona’s item builds are pretty standard as far as tank supports go. She takes a Relic Shield item, then builds in Locket of the Iron Solari. With support gold incomes, she’s limited in which items she can select, but the variety offered doesn’t differ from other tank supports.

Rell, on the other hand, is given the ability to consider other options. While she can effectively use the same pool of items as Leona, her best builds make use of her boosted speed while mounted. Most specifically, Rell’s tend to gravitate towards Dead Man’s Plate as their first item rather than a Mythic. Some Rell’s will also opt into building Turbo Chemtank to get a wildly fast engage. 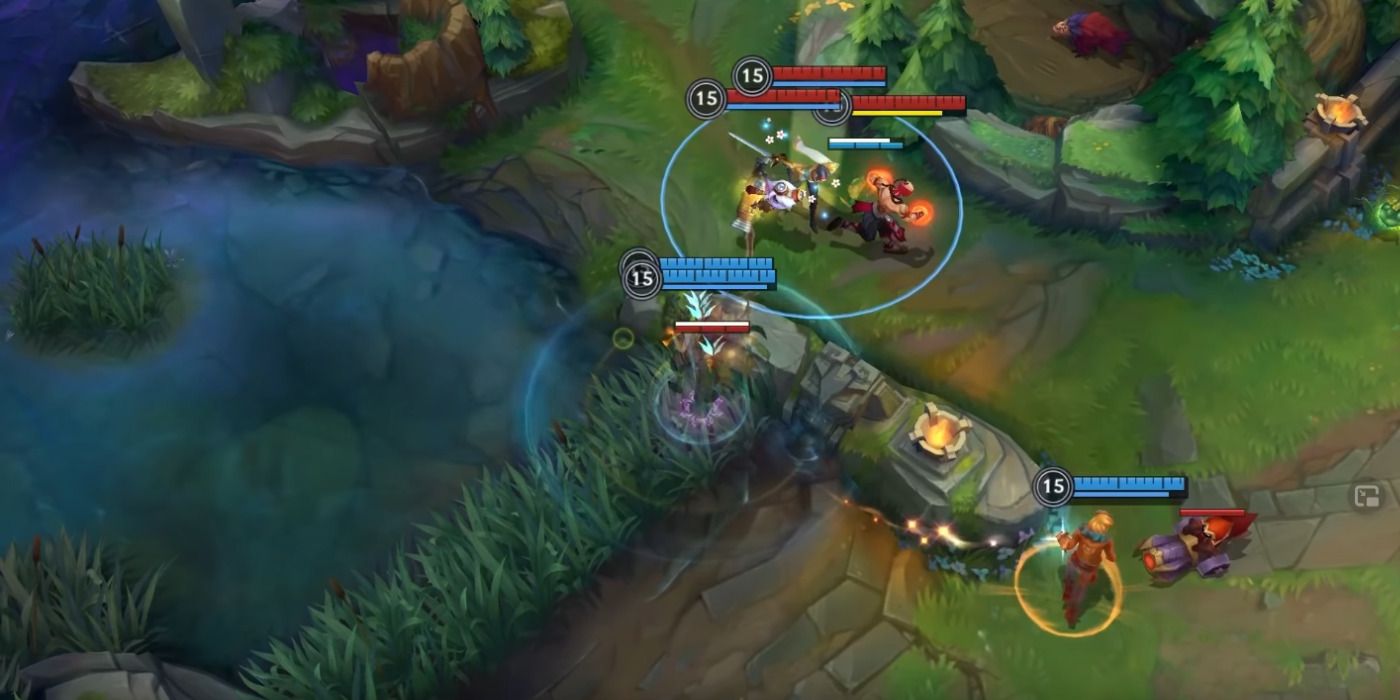 A good tank support has to be tanky without requiring expensive tank items. If they can operate on a support item and a Mythic, that’s the best one can hope to use. So, while Rell has interesting build options, those options require quite a bit of investment. Even with her shield following Crash Down, Rell is lacking in innate tankiness.

Leona packs tools that allow her to become deceptively tanky with no items necessary. Aftershock in combination with Eclipse can make her base armor and magic resistance skyrocket, although it is for a brief window of time. This means that most trades in the game, Leona will win out in the end.

4 Rell Is Better: Debuffs and Shield-Breaks 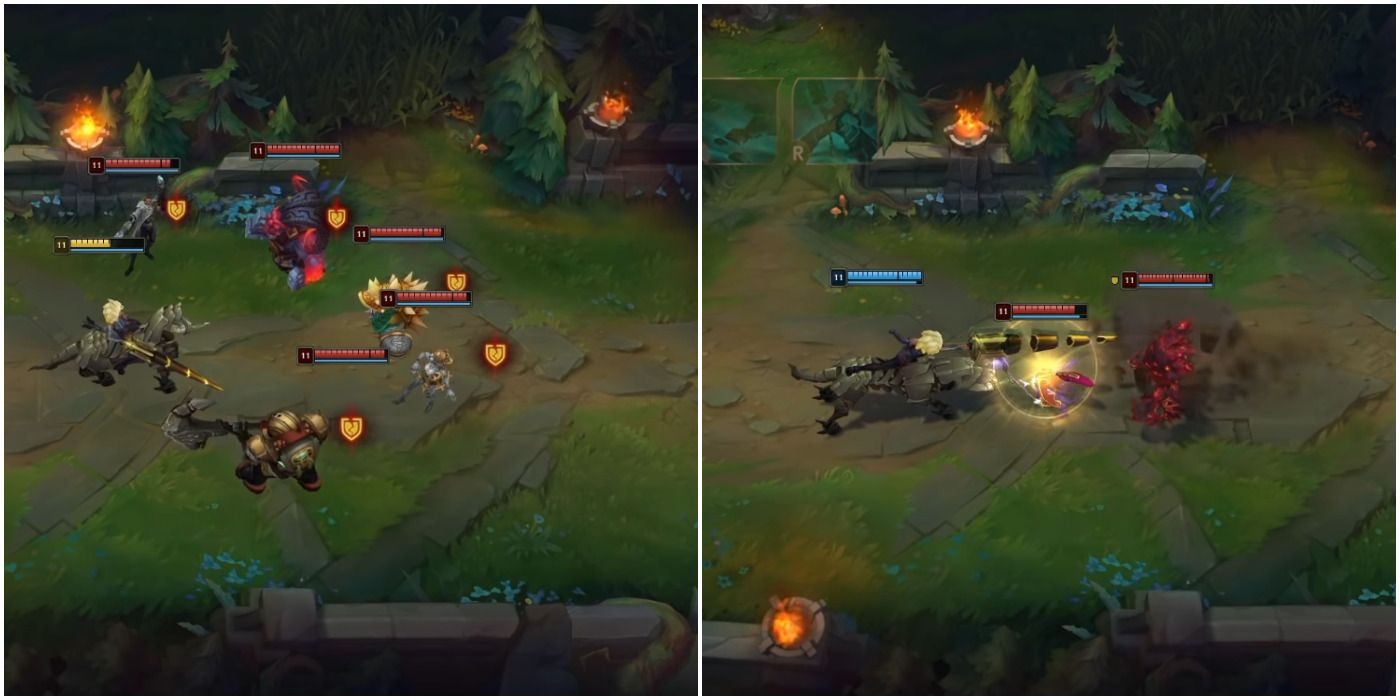 Rell has a lot of tools loaded into her kit. Many of these functions will likely get cut out as she gets nerfed due to her presence in pro play. For now, though, she still has many of the same tools as she had on launch. Of all of her abilities, the one that has the most hidden power is her Shattering Strike and her passive, Break the Mold.

Break the Mold is one of the few true debuffs on a champion’s kit. After striking a target, Rell will steal a portion of the Armor and MR. This is valuable for softening targets to make them easier marks for allies to take down. Her auto-attacks are slow, but Shattering Strike can apply those marks as well. On top of that, Shattering Strike also busts down shields, ruining the days of any well-meaning enchanter.

In terms of hidden power, Leona is rather face-up. The most hidden power she has is loaded into her Sunlight procs, but those are still pretty obvious to players. However, one tool that helps separate her from other supports, especially Rell, is her ability to quickly clear enemy wards as they are placed on the map.

Vision denial is an important job that supports have, but each ward is an investment of time. Sight Wards take three hits to kill, and Vision Wards take four. Rell, with her reduced attack speed, struggles to clear wards without help. Leona, on the other hand, can use the animation cancel on her Q to instantly clear a sight ward the moment it appears. It takes a bit of practice to time, but any decent Leona can keep the map dark for opponents.

Rell is rather weak at low levels and without items. She still has some innate tankiness, but her kit tends to get her caught out if she isn’t careful. She doesn’t have the ability to exit a fight after she goes in, and this is further exacerbated by her unmounted form slowing her down.

However, with some levels in her abilities and a couple of tank items, Rell’s power really shines. She scales very effectively into the later stages of the game, and reduced cooldowns on her abilities are a godsend during fights. She’s able to do more of what she does best. She still can’t escape a fight once she goes in, but if all goes well, she shouldn’t need to. 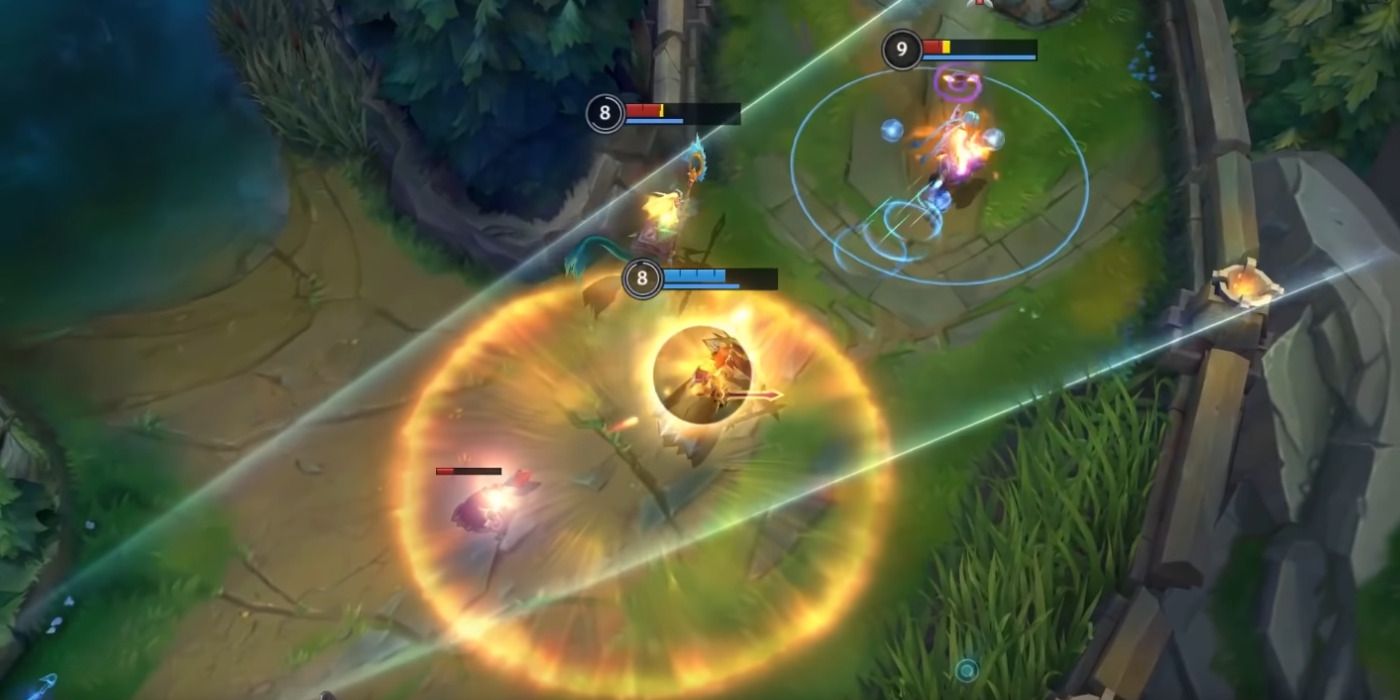 Bot lane players live in fear of laning against a good Leona. The champion, with the power she has, is a menace to fight at every single level. At level 1, her Shield of Daybreak is enough to help her win a good trade. At level 3, her engage is hard to beat, and she can typically land a kill. At level 6, it’s time to start praying for divine intervention.

Leona’s pressure as the game goes on reduces, which is nice. Despite that, her early game presence and power are what lead some ADC players to outright ban her. She isn’t the strongest overall, but that early game is truly nightmarish to compete against.

Next: 10 League Of Legends Pros Who Already Retired 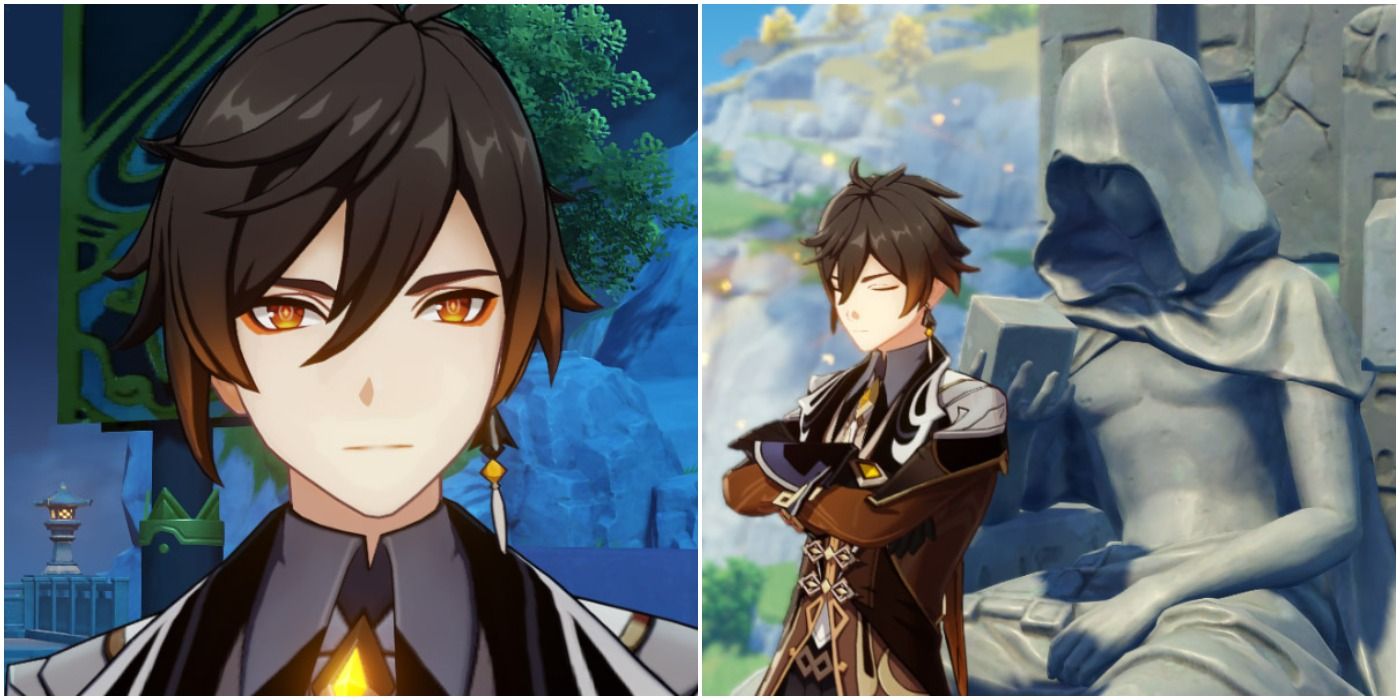 Tanner Kinney is a writer, podcaster, radio show host, and game-player based in Indiana. He has previously written for and helped lead a student publication about entertainment in college before writing for TheGamer. A student in the Telecommunications program at Ball State University, Tanner uses his skills in media analysis to find the right way to pick apart any topic at hand. He’s a Japanese role-playing game fanatic and Chikorita enthusiast, owning maybe one too many Pokemon plushes.