You are here:
Home / Krampus in Warzone: Krampus is killing Call of Duty Caldera games 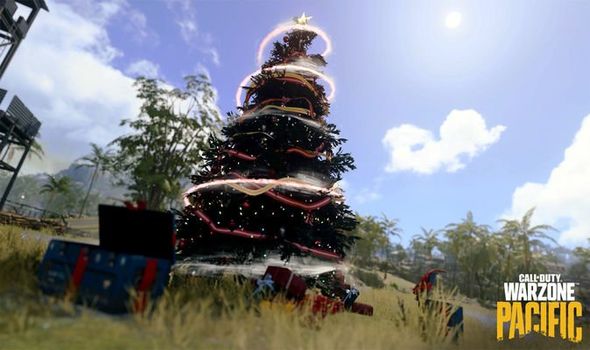 Krampus, the horned and mystical legend that hunts down naughty children can currently be found roaming around Caldera in Call of Duty.

You know he’s keeping an eye on things as a message at the start of each map confirms that Krampus is on the hunt.

And while it’s not guaranteed that you’ll be selected for his attention, it appears collecting coal from holiday boxes can help boost your chances.

This is how Activision describes how the new feature works on Caldera: “Beyond being a sign to do some good this holiday season, the coal found in those Holiday Crates does attract a certain folklore creature.

“Krampus tends to spend his holidays on Caldera and Rebirth Island, where within minutes of a match starting, he goes on the hunt for sport. While his choice of target is more random here than in Vanguard, he does tend to hunt down those who received coal from the Holiday Crates.

“This mythical creature will take three minutes to complete his hunt before he disappears for his next target, or he’ll be killed and give out a special permanent reward for the squad that faces his wrath.

“Because these islands are his usual stomping grounds, Krampus has some other surprises in store throughout Festive Fervor. Fortunately, all of these are relatively nice — expect modifiers like increased chances of Legendary Supply Boxes or half-off Buybacks on each day of this holiday event.”

Killing Krampus is pretty simple stuff; if you’re selected to be targeted by the creature, you will get a warning message on the screen.

He will then appear near you and you will need to fire a lot of bullets into him before you win.

Krampus will disappear and reappear during your encounter, teleporting at certain intervals, usually behind you.

When you do finally slay the beast, you will receive a bunch of money and some useful items, such as a Precision Airstrike.

The problem is, Krampus can be a real drag if you’re enjoying your game of Call of Duty Warzone.

Imagine being in the middle of an exciting encounter with another team, or closely hunting someone to take them down, only to be warned that Krampus and his claws are on the way.

Some players have enjoyed the features and it should be noted that Krampus will only be around until early January.

But some gamers are having less fun with the hairy gentleman caller, with one COD fan pointing out on Reddit:

“I mean in the right places it’s funny. Sometimes he just turns invisible and blocks doorways, which happened to me last night. He’s also been spawning in the late game apparently.”

“It’s fun until a random mechanic like this ducks you over while fighting another squad or trying to enter the last circle. It’s just one more random element that is completely out of your control that does not belong in a competitive game.”

“The Trees and elves are definitely fun since you can choose to interact with them or not. But Krampus is not fun anymore after the first few matches.”