Kingdom Come: Deliverance's side quest In God’s Hands lets you explore the aftermath of the Skalitz raid, find out more about who Johanka is, and get some useful rewards in the process. There are a few different ways to complete the quest, so we’ll cover the options here and give you some tips to help you along the way.

Before you start, we recommend completing the ‘A Man of the Cloth’ side quest first to find Father Simon, as he’ll be important later. Secondly, having at least ten bandages, a Lullaby, and an Artemisia potion or the ingredients to make them will mean less running between traders. You may want to take a bow and arrows for hunting, plus a Bard potion if you’re charisma-focused, otherwise, bring plenty of Groschen to buy meat and bribes. Lastly, if you’ve got the perks First Aid II or III, they’ll be very useful here. 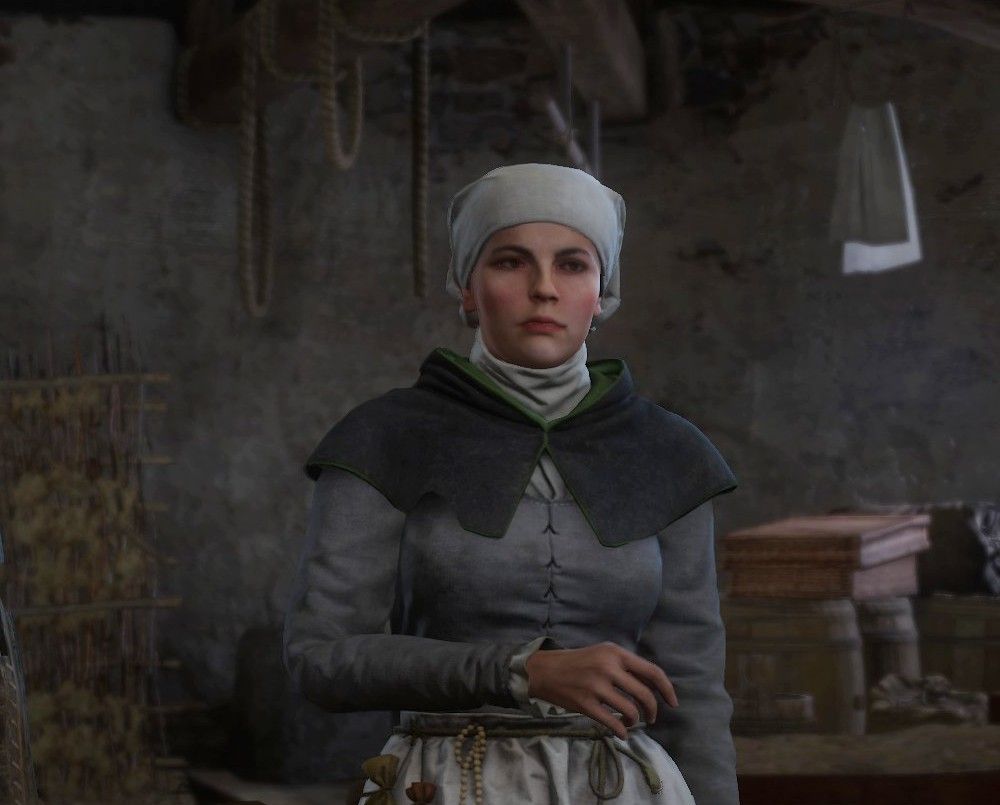 Johanka can be found in and around the Sasau Monastery Infirmary across from the Monastery itself. When asking if she needs help, you can offer your services straight away if you have the First Aid II perk or you can talk to Brother Nicodemus to get started instead.

Talking to her puts into words just how sorry the situation is, she mentions the lack of food and the deplorable conditions for those recovering, both problems can be solved as optional objectives. She also mentions that — outside of Brother Nicodemus — the monks are no help whatsoever, and the Custodian is strutting around like a pigeon outside a bakery, occasionally leering inside and with more food than they need.

Once you’ve finished your conversation, you need to go around the infirmary and interact with the sick to find out who needs help. There are five patients you can personally assist with. Starting from the left and going clockwise…

Talk to the insomniac lying on the straw bed. He complains of his leg pain and the racket from other patients makes it so he can’t sleep.

Now talk to Brother Nicodemus. He sheds more light on why the situation here is so bad but importantly, he teaches you how to make a Lullaby potion. 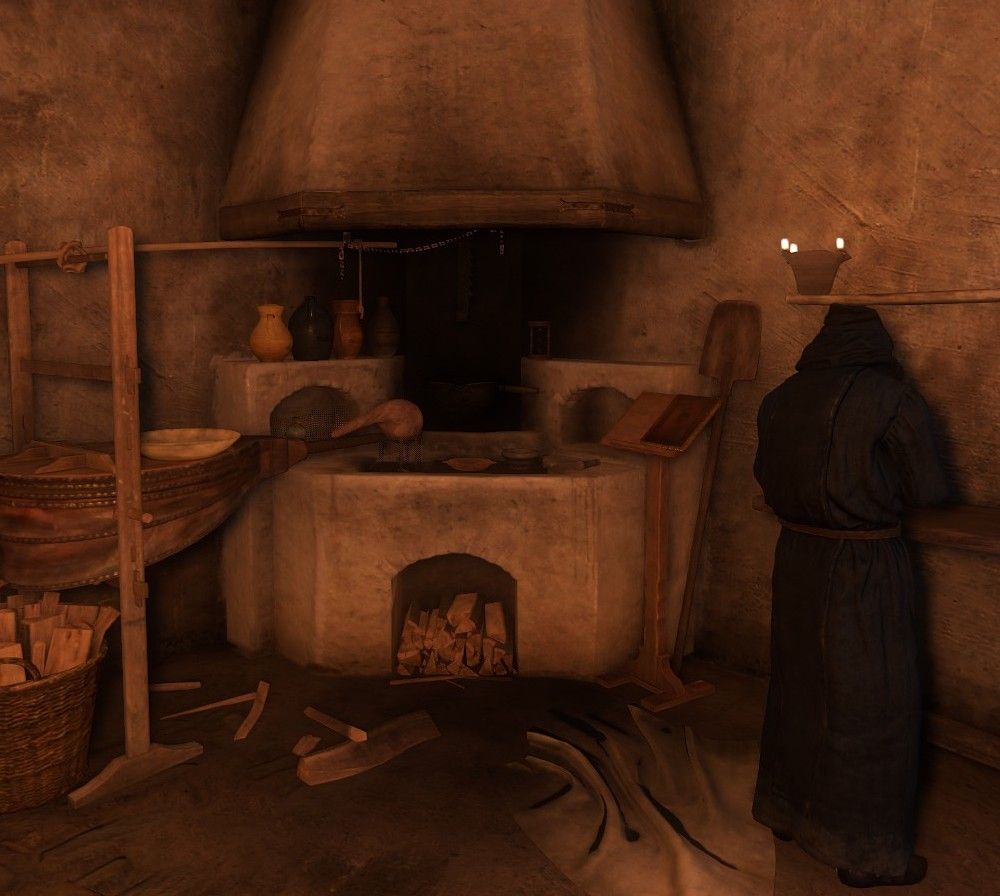 Use one Poppy, one Herb Paris, and one Thistle then follow the instructions to make it at the Alchemy Bench next to Nicodemus' Workbench. If you haven’t got the herbs and don’t consider yourself a botanist, you can buy the ingredients from Brother Nicodemus instead, or buy the potion from the Rattay Apothecary. Once you’ve made the potion, give it to the insomniac to complete the task.

Henry recognises Semek isn’t from Skalitz. The quarryman is here because whilst constructing the Monastery, the scaffolding collapsed beneath him. The wounds have already been taken care of, instead, he requests some purple herbs but doesn’t remember what they were. If you ask Brother Nicodemus about the plant, he points you to the herbarium to figure it out for yourself. 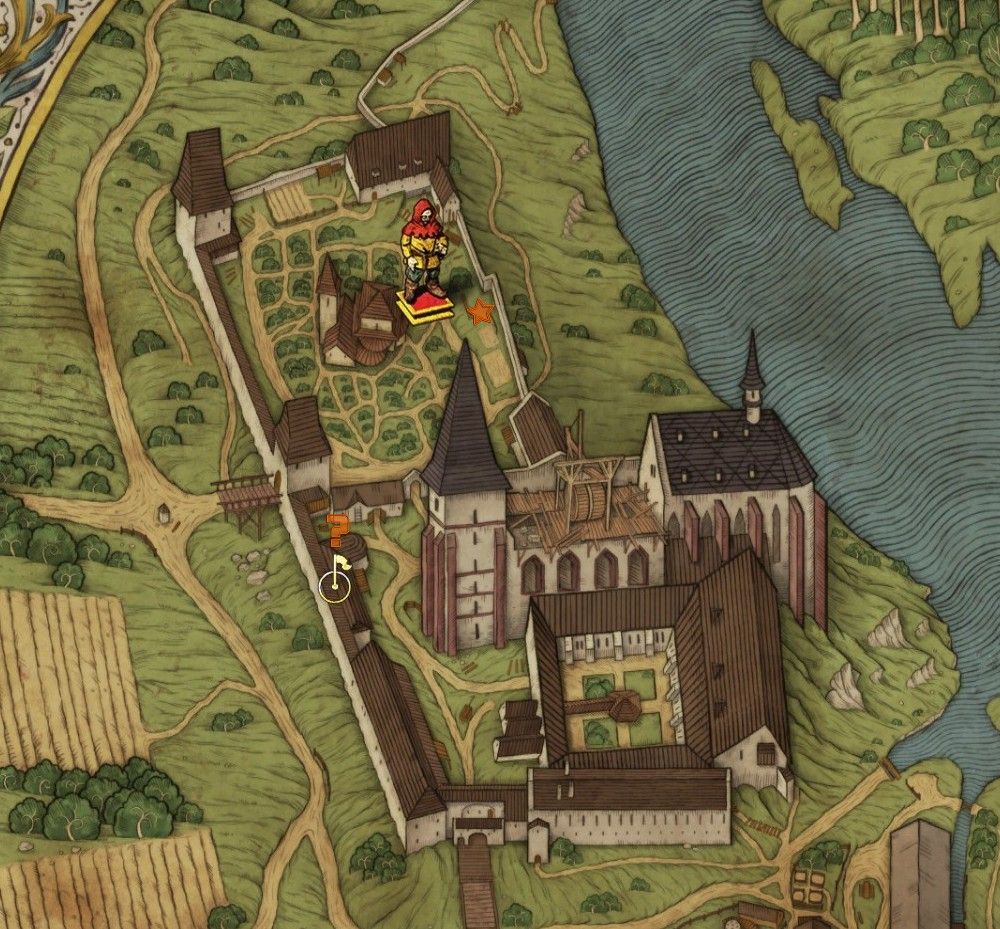 The correct herb is Comfrey, you can either buy one from Brother Nicodemus or find some in the Monastery gardens below the Custodian’s house. Go back to Semek and give him the herb. Make sure to speak to him in a few days, as he gives you a secret which improves your Vitality. 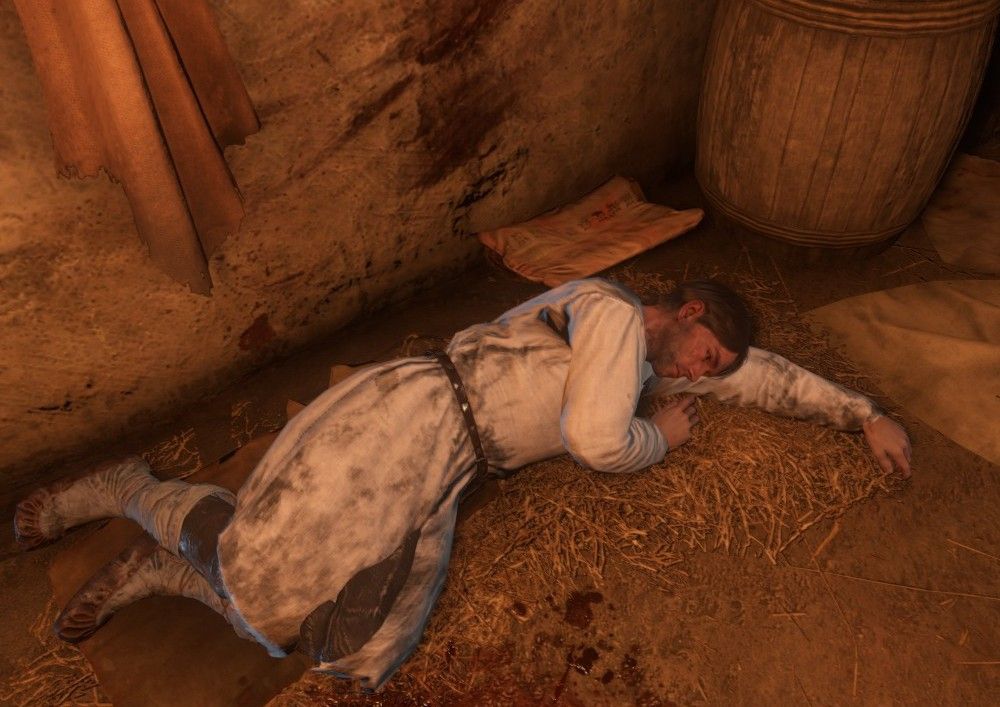 You might remember Hannes from the beginning of the game as Deutsch’s son. He's the person who owned the house you did (or didn’t) throw poop at. Great start. Unfortunately for Hannes, he “did a mischief” while running away, wounding his leg and now there aren’t enough bandages to regularly change the dressing.

To help, Get 10 bandages. You can buy them from Brother Nicodemus, Bathhouses, or find them on NPCs and the world in general.

Bring the bandages back to Hannes, if you have the perk First Aid II you can dress the wound yourself, if not, ask Brother Nicodemus to do it for you.

Deal With The Custodian 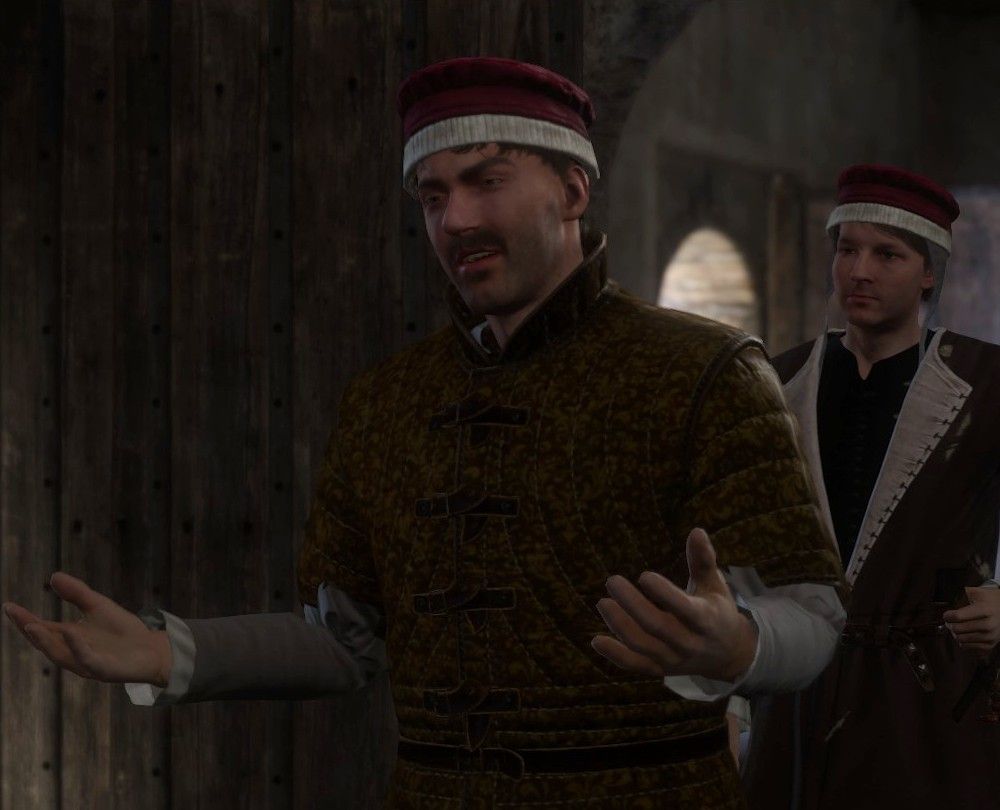 After helping any three patients, the Custodian will strut in and invite Johanka for a banquet at his house. Sadly, you’re not invited, and he’s not happy you’re here at all.

Do not say “Johanka doesn’t need anything from you”. You’ll get one chance to back out but tell him “I talk to everyone the way they deserve” and he’ll throw you in jail until the next morning.

Drink the Bard potion before you remedy the third patient. And remember, speech is influenced by the reputation you have with the person you’re talking to, so stay on the Custodian’s good side to improve your odds.

As much as it pains us, selecting “I won’t intrude” won’t affect the quest and Johanka will just be absent for a day. At a private banquet. With him.

Help The Villager With The Broken Leg

Thomas is the man next to the altar, who isn’t reacting and seems to have a problem with his leg.

Talk to Johanka. She says he had a badly broken leg and that they tried to straighten it but aren’t confident it worked.

If you have the First Aid III perk, you can fix his leg and complete this objective now. If not, you’ll need to talk to the Rattay executioner – Hermann. You can find him West of Rattay, beyond the forest. Look on the world map for a picture of some gallows, the house just above is his. 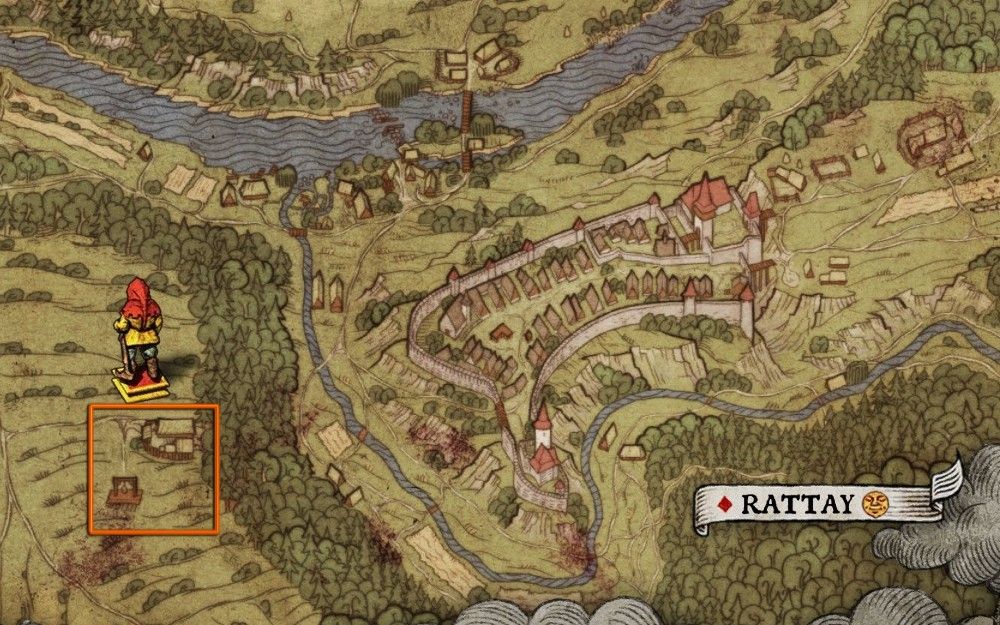 Hermann has a very low Speech skill and so is very easy to convince to help you. If not, bribe him with 70 Groschen to find out what you need to know. Go back to the infirmary and interact with Thomas to fix the bone.

On a side note, Thomas can also help you in the main story quest If You Can’t Beat ‘em. Where he advises you on how to meet the crimps.

Phillip is on the bed next to Thomas. He’s also from Skalitz but instead of running from the attack, he hid amongst the dead for days and seems to be dying from exposure to the corpses.

Complete the side quest A Man of the Cloth before starting In God’s hands, so you can avoid wasting precious time finding Father Simon.

Talk to Johanka again, she suggests Father Simon is his only hope. Now talk to Father Simon in Rovna. He explains Phillip’s best hope is to have his intestines purged, then shows you how to make an Artemisia potion to do it.

Use two Wormwood and one Sage and follow the instructions at the Alchemy Bench to make it. You can buy the ingredients from Brother Nicodemus again if you don’t have them or buy the potion from the Rattay Apothecary. Now give Phillip the potion and come back in 24 hours to see if it worked.

Bring Meat To The Infirmary

Simple enough, Give 100 game meat to Johanka. You can either pay for it — but you might need to visit a few traders — or get it yourself.

The woods North of the Monastery and the marsh just over the river both have deer hunting spots. Bring a bow and arrow and you should get enough meat from one or two deer alone.

Get Better Conditions For The Sick

After talking with Brother Nicodemus, the only way to get supplies for the sick is to go cap in hand to the Custodian.

Talk to the Custodian and ask about supplies. It doesn’t matter whether you discuss Johanka or not but afterward you’ll have two choices: persuade him or bribe him.

Again, his Speech skill is very high so talk to him with a high Speech skill yourself and ideally, soon after quaffing a Bard potion.

If this isn’t an option, you’ll need to pay him 150 Groschen, still not enough to cover his pride, but enough to pay him for the supplies at least.

Once all goals have been finished, go back to Johanka and tell her “There’s nothing more I can do” to complete the quest.