If you want to understand JoJo’s Bizarre Adventure as it is now, then you need to know Stardust Crusaders. This arc of the long-running manga introduced critical new characters and concepts, like Jotaro Kujo and Stands. Furthermore, this arc wraps up many loose ends regarding the Joestar/DIO feud.

Unfortunately, if you want to unlock the Stardust Crusaders JoJo Glossary in All-Star Battle R, you must win three boss battles in ASB Mode. And the most brutal battle is a five-star difficulty bout between Noriaki Kakyoin and DIO. Thankfully, we fought those battles and gathered the glossary contents for you!

We alphabetically organized this guide into four sections. You can jump through these sections via the Table of Contents. 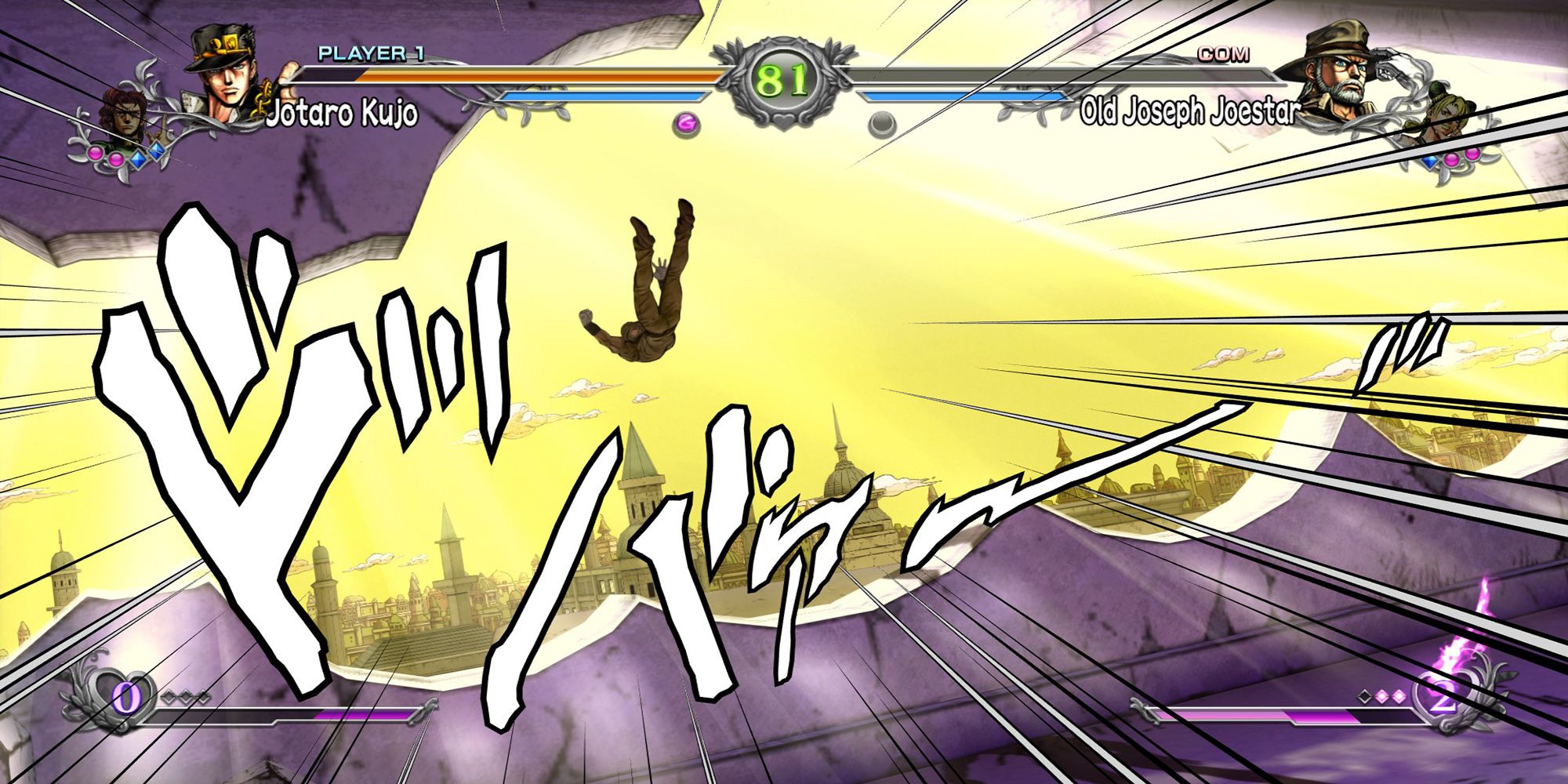 Stand: Set. Likes to taunt the weak. Turned Polnareff into a child, but even then barely managed to beat him. Did the same to Jotaro, but he was beaten to a pulp and retired.

Once belonging to a sword smith from Ancient Egypt, this Stand manifested itself in a sword when he died. It learns the techniques and absorbs the power of those it fights.

Mariah's Stand. Appears as an electrical outlet. It can even be placed on non-conducting objects such as rocks. The body of anyone who touches it is magnetized, with the force increasing until it attracts objects as heavy as cars.

The bridge that spans the Nile where Jotaro and DIO had their deadly final battle.

The scene of the Joestars' showdown with DIO. The final battle between Jotaro and DIO takes place on a bridge over the Nile.

Stand: Judgment. One of DIO's hired killers. He uses puppets of Sherry and Avdol to attack Polnareff, but is defeated when the real Avdol shows up and they send him to hell.

User of the Stand The Hanged Man. A man with two right hands who is one of DIO's henchmen, Enyaba's son, and the killer of Polnareff's sister, Sherry. He teams up with Hol Horse to beat Avdol, but dies at the hands of Polnareff and Kakyoin.

Stand: Cream. A devoted servant of DIO who is willing to die for his master. In his fight with Polnareff, he kills both Iggy and Avdol before Polnareff realizes he's a vampire and kills him with sunlight.

Cool Ice's Stand. Its mouth becomes a void, and anything it swallows besides Cool Ice and the Stand itself is blown to oblivion and annihilated.

User of the Stand Osiris, the elder Darby brother, and a pro gambler. He can steal the souls of those who lose his wagers and turn them into poker chips. He beats Polnareff and Joseph, but a poker defeat at the hands of Jotaro sees him retired.

User of the Stand Atum, and the younger Darby brother. A natural-born gamer, he steals the souls of other gamers he beats and plants them in puppets to further his collection. He beat Kakyoin, but was retired by Joseph and Jotaro.

User of the Stand The World, and the archenemy of the Joestars. In the final showdown in Egypt, he uses his Time Stop ability to kill Kakyoin and defeat Joseph and Polnareff. He loses in one-on-one combat with Jotaro, however, and dies.

DIO's secret home in El Cairo City, Egypt. The Joestars close in on the casket of the vampiric DIO, but are forced into a temporary retreat by the might of The World. The final battle then unfolds in the city.

Hol Horse's Stand that takes the form of a revolver. The bullets it fires are Stands in their own right, able to control their trajectories.

Centerfold's mother. Stand: Justice. She taught DIO how to use his Stand, but becomes crazed upon losing her son. She goes after Joestar, but DIO kills her. She remains loyal to her master always.

Iggy's Stand. Takes the form of a sand monster. By its very nature, it cannot suffer physical damage. It has all kinds of useful functions, such as being able to turn into a glider or a dome. 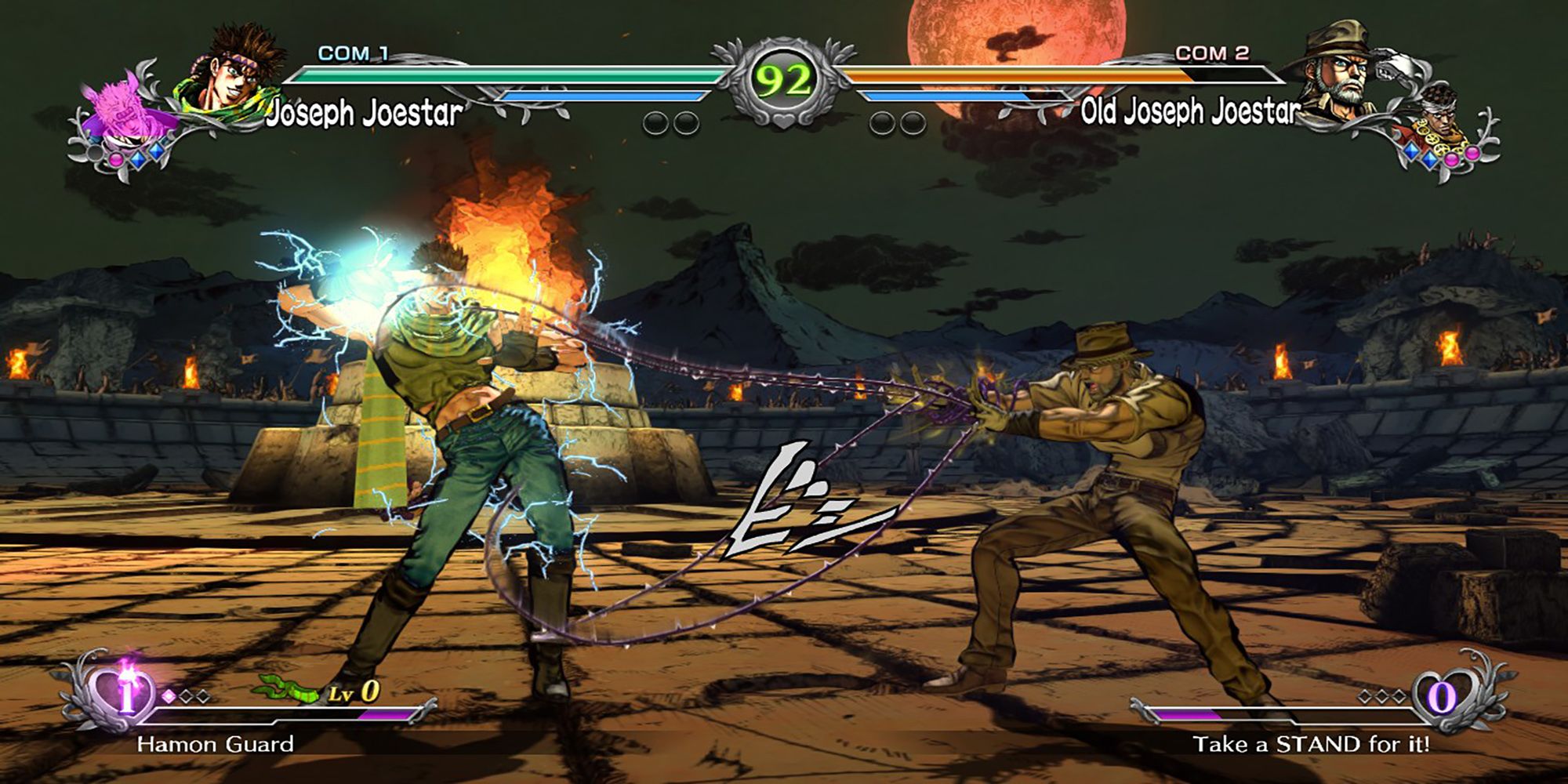 Ths Stand of Centerfold. It appears to exist only within a mirror, and does damage by stabbing reflected victims with a dagger. It can travel extremely fast between mirrors, just as light does.

Old Joseph Joestar's Stand. It resembles a thorn bush and can perform spirit photography with a Polaroid camera, among other things. Though the thorns have limited attack power, they can prove useful in a variety of other ways.

Noriaki Kakyoin's long-range, humanoid Stand made of a coil that can unravel very fast. It can strike at a range of more than a 100m, but with low power. Its Emerald Splash attacks are highly destructible, however.

User of the Stand The Emperor and one of DIO's henchmen, he looks like a Wild West cowboy. Lives by the maxim, "Don't be No. 1, be No. 2" and has a keen eye for a good partner. He also claims to be the world's best lover with girls worldwide.

Pet Shop's Stand. Takes the form of a petrified pterosaur. It has the power to control cold, which gives it a versatile arsenal of techniques; in addition to creating ice structures, it also makes icicle missiles and freezes the ground.

Stand: The Fool. A purebred Boston Terrier, he joins Joestar's team in Egypt after being flown in as aid by the Speedwagon Foundation. He loves to tear out hair and fart in people's faces.

User of the Stand Silver Chariot, at once a chivalrous knight and a chirpy ladies' man. On his travels he defeats Centerfold and avenges his sister. After a fierce battle with Cool Ice, he finally settles back in France.

Protagonist of Stardust Crusaders. He is the grandson of Joseph Joestar and father of Jolyne Cujoh. Sharp and always levelheaded, yet passionate in nature. He unearths his time stopping ability to defeat DIO in the final battle. 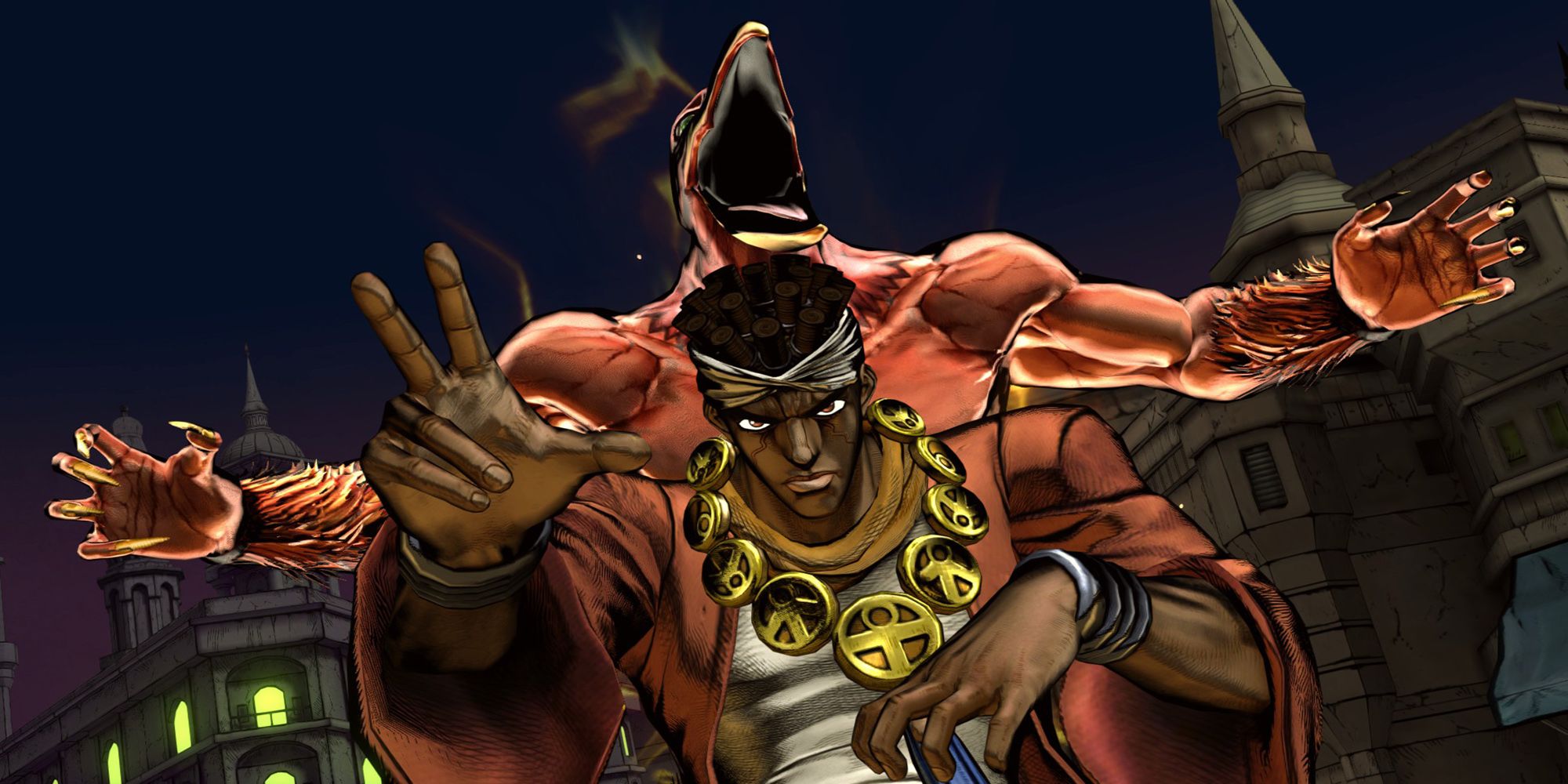 Mohammed Avdol's Stand, which has a bird's head on a humanoid body. It wields flames so hot, they can melt metal projectiles in mid-air. It also boasts unusually powerful raw combat skills.

User of the Stand Bast. Magnetizes Joseph and Avdol, easily overpowering them. She is retired from the fight when, in the end, their car-and bicycle-covered bodies magnetize to each other and she is crushed between them.

User of the Stand Magician's Red. He is a friend of Joseph Joestar. An astrologer by trade, with great leadership and charm. He saves Polnareff and Iggy from Cool Ice's ambush at DIO's Mansion, but dies in the process.

Stand: Hierophant Green. Has a reserved and honorable personality. He takes the lead in the showdown with DIO, and despite being mortally wounded, manages to warn Joseph about The World's time-stopping abilities before taking his last breath.

A vampire and one of DIO's henchmen who lacks any Stand abilities. He tries to ensnare the Joestars with his ability to masquerade as a woman, but fails. Captured, he is forced to help open DIO's casket, only to be killed by DIO himself.

User of the Stand Horus. A falcon who guards the front gate of DIO's mansion. Nearly killed Iggy until, in a last-ditch gambit, the dog bit off its beak and caused its ice pillar to backfire, killing it. 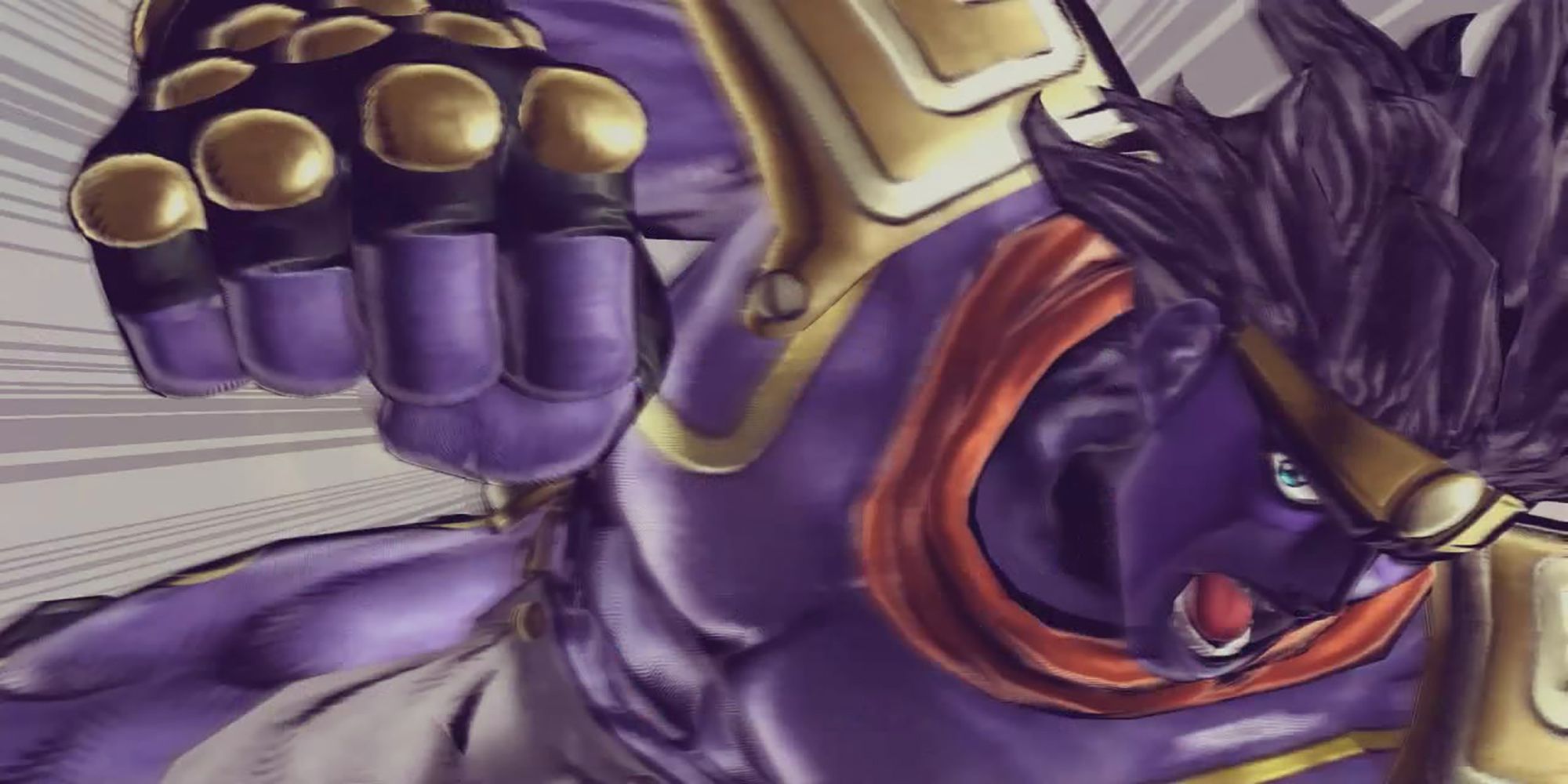 Jean Pierre Polnareff's Stand, with a sword and armor like a cavalier from the Middle Ages. Its power is unremarkable, but the rapier is awesomely keen, and it can shed its armor to increase its speed. It can also hurl its blade very accurately.

User of the Stand Ebony Devil, and a henchman of DIO's known as Soul Sacrifice the Cursed. He attacks Polnareff, but dies when the Frenchman's quick wit turns the battle around using a mirror, and almost all of Soul Sacrifice's body is cut to shreds.

A form of guardian spirit or avatar that stands by its user, using supernatural powers to defend them and attack their enemies.

Jotaro Kujo's Stand, boasting such astronomical power, speed, precision, eyesight, and visual acuity that it can catch flying bullets in its fingers. Coupled with Jotaro's flawless skills, its awesome stats could make it the greatest Stand in history.

DIO's close-range optimized Stand, with even greater speed and power than Star Platinum, plus the ability to stop time. At first it can only manage about five seconds, but in battle with Jotaro, it stops time for up to ten seconds.