You are here:
Home / JoJo’s Bizarre Adventure: All-Star Battle R- How To Use Mounted Characters

Did you ever imagine you would play a fighting game where characters ride on horses mid-battle? You can do that in JoJo's Bizarre Adventure: All-Star Battle R! These horseriding characters use a style called Mounted, which lets them attack with their Stands while on horseback. Furthermore, Mounted-Style is specific to characters from the manga's seventh arc, Steel Ball Run.

Mounted-Style is a niche groove in ASBR. And with so many technical aspects, such as Stand abilities, Mounted/User Modes, and Holy Corpse levels, we recommend this style for advanced players. However, if you've gained experience with other styles, like Hamon and Stand, then saddle up, and we'll show you the ropes! 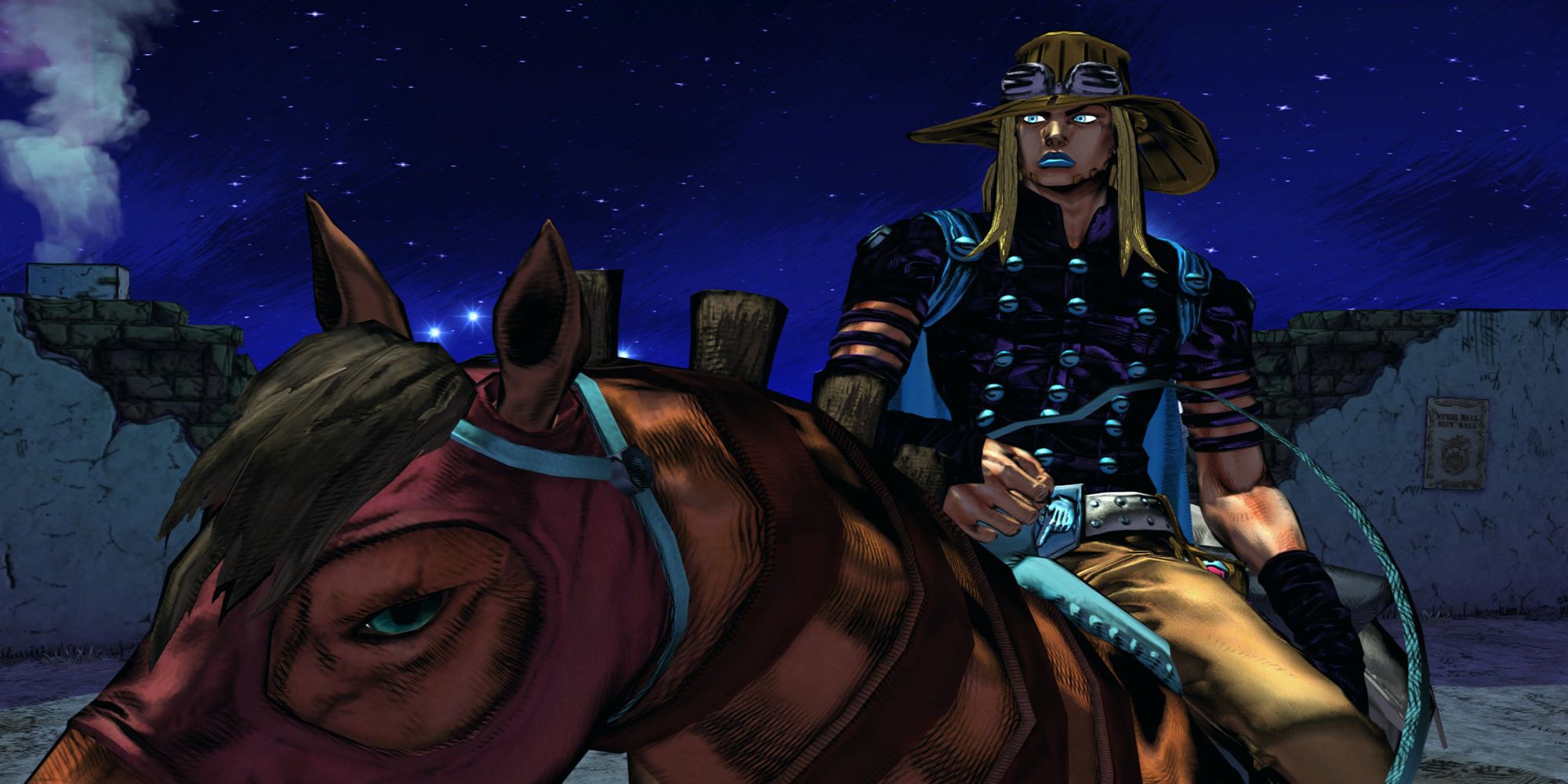 The roster of characters that use Mounted-Style is limited. In total, there are three characters, all from Steel Ball Run:

Perhaps, with time, this number will change. After all, Diego Brando is a new Steel Ball Run character brought into the fold for All-Star Battle R.

What Unique Abilities Do Mounted-Style Characters Have? 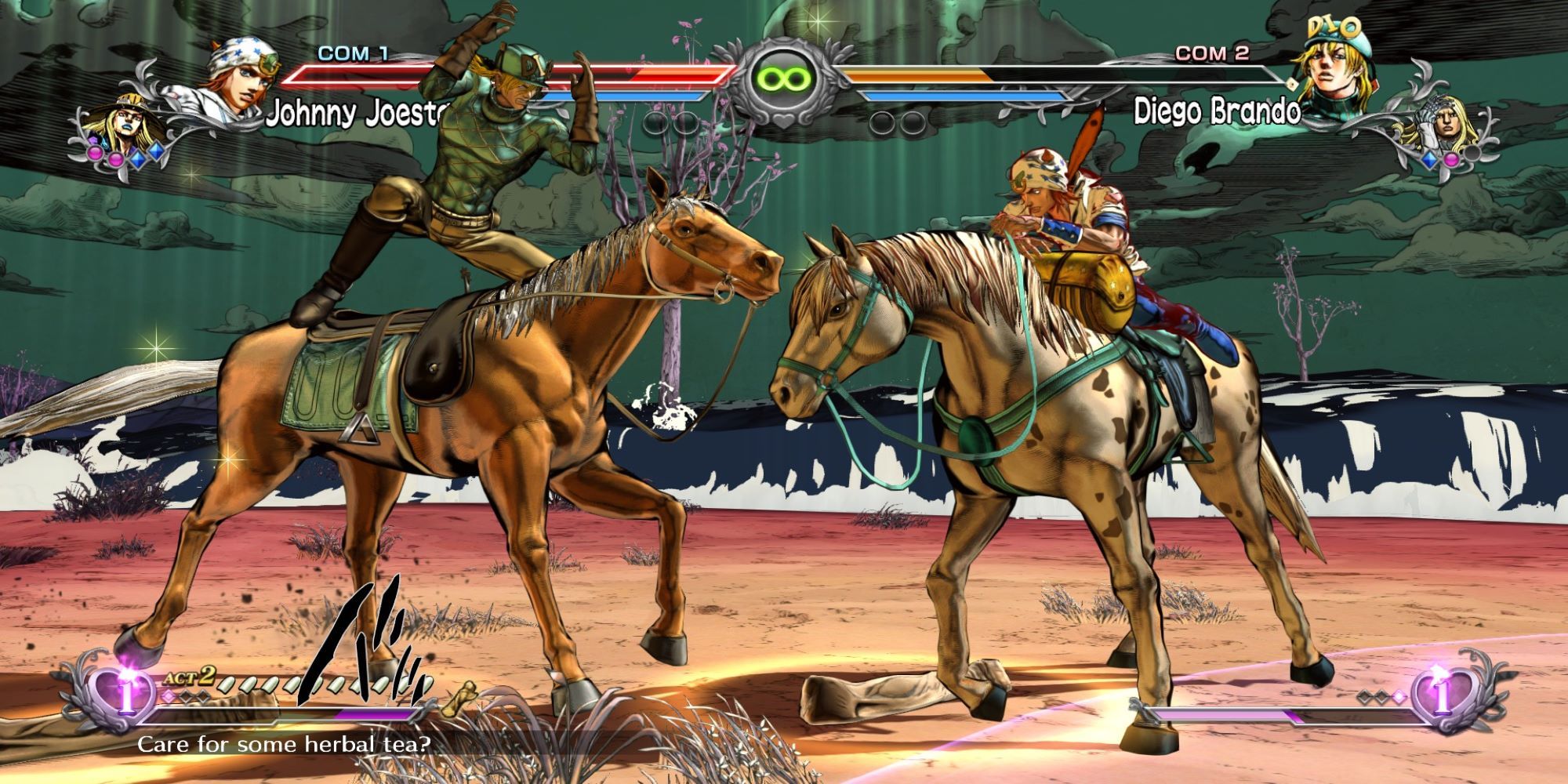 If we were to boil down a Mounted character's single distinct characteristic, we would say horses. These are fighting game characters that fight on horseback. Even their horses will hurl kicks and other attacks at opponents. Still, there's much more to Mounted-Style than that.

However, any Steel Ball Run character, including characters that don't use Mounted-Style, can benefit from scavenging Holy Corpse parts. 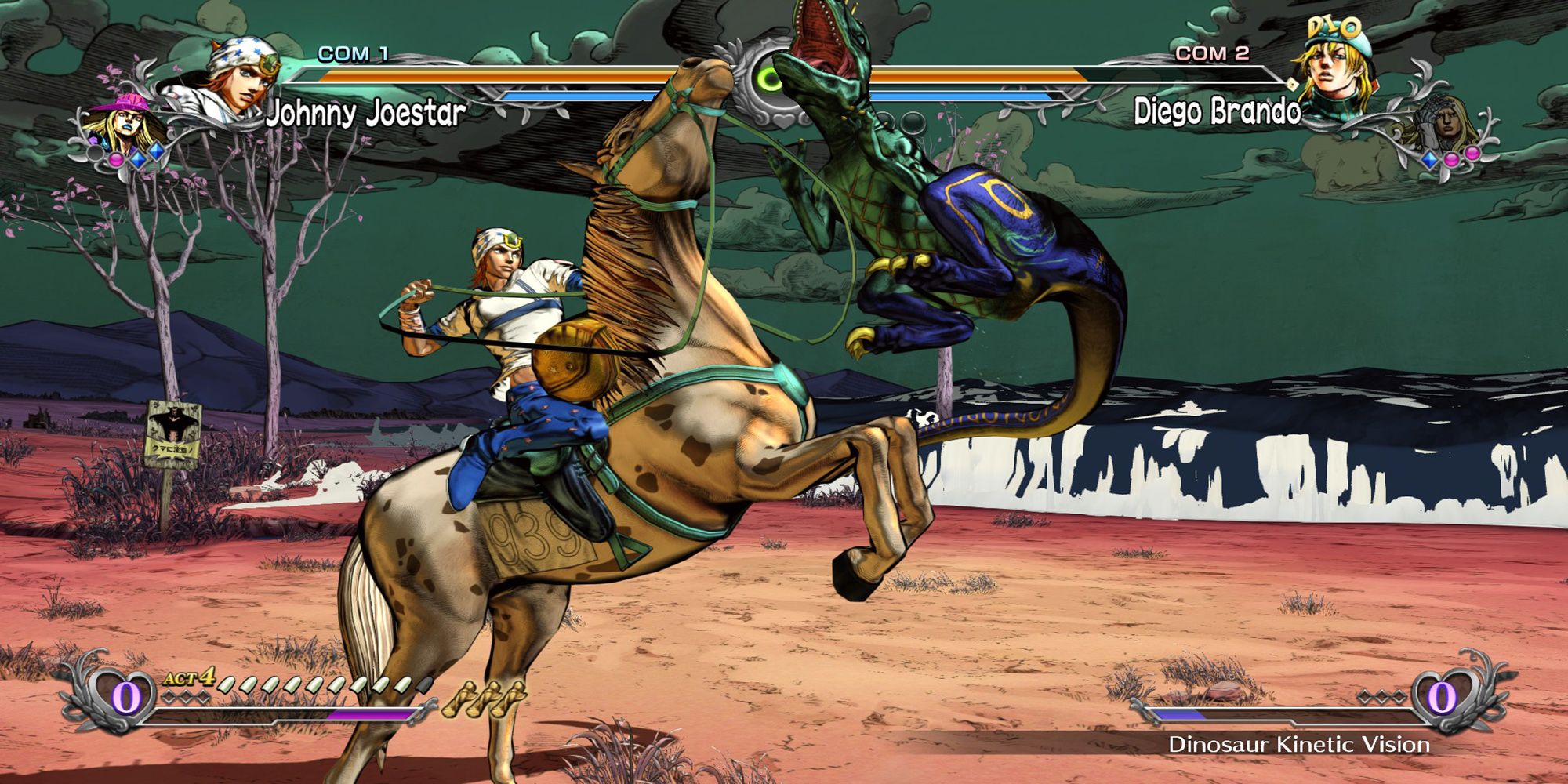 However, Mounted-Style characters also use Stands. So, when a character mounts their horse and dismounts, the Stand's available skills can also change. Furthermore, each Stand has a separate gauge or mode of some kind. For example, Diego can use his HHA to switch into a Dinosaur mode, which grants him access to unique skills and attacks for a limited period.

Lastly, like other mode-switching characters, Mounted characters will fall off their horse if it gets downed. 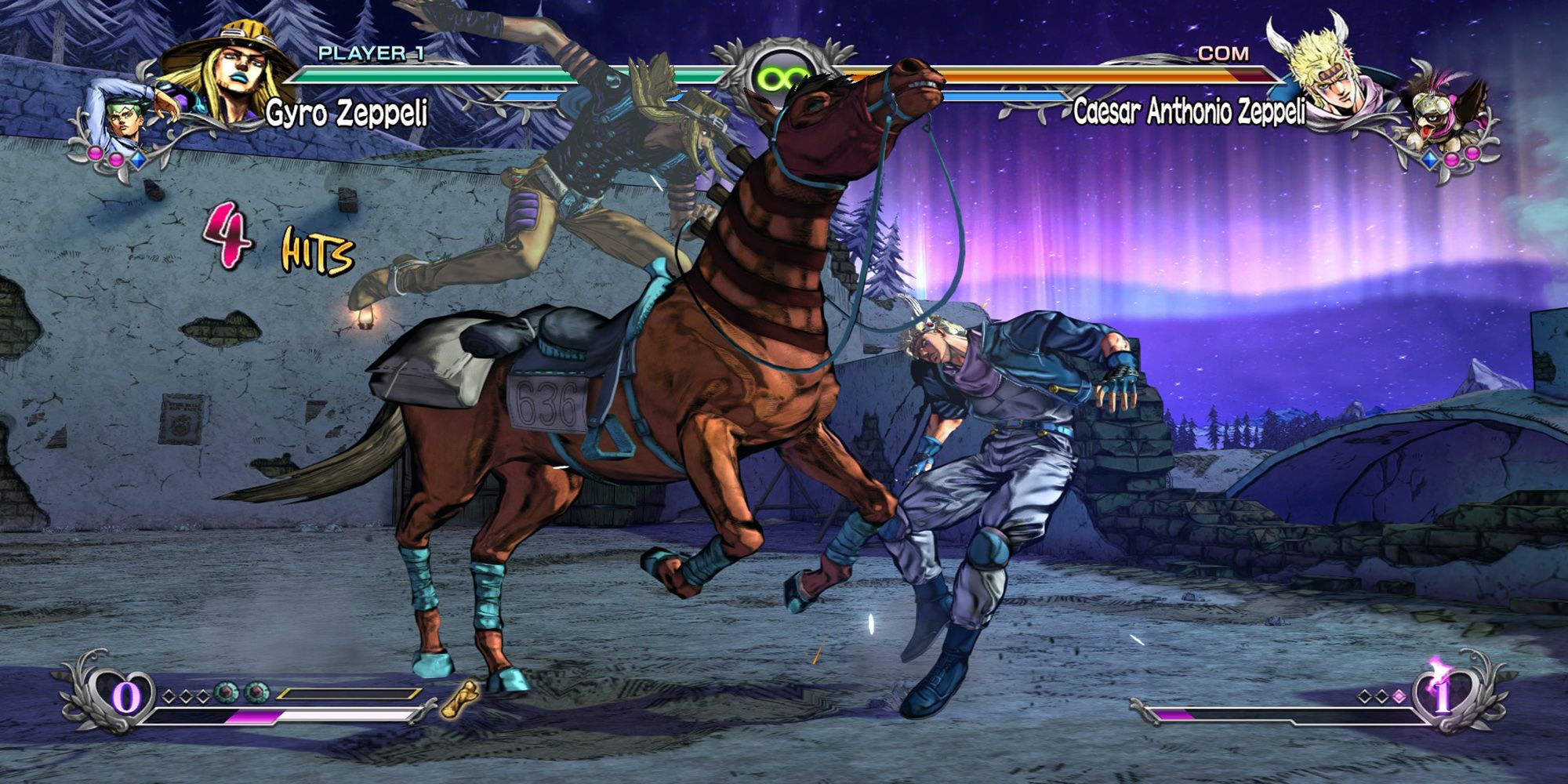 If you're familiar with Quick Stand ON, Quick Mount is not much different. For the cost of half an H.H. gauge bar, you can cancel a normal or special attack in User Mode to mount your horse quickly. Unlike Quick Stand ON, however, your horse will attack as it enters the arena. 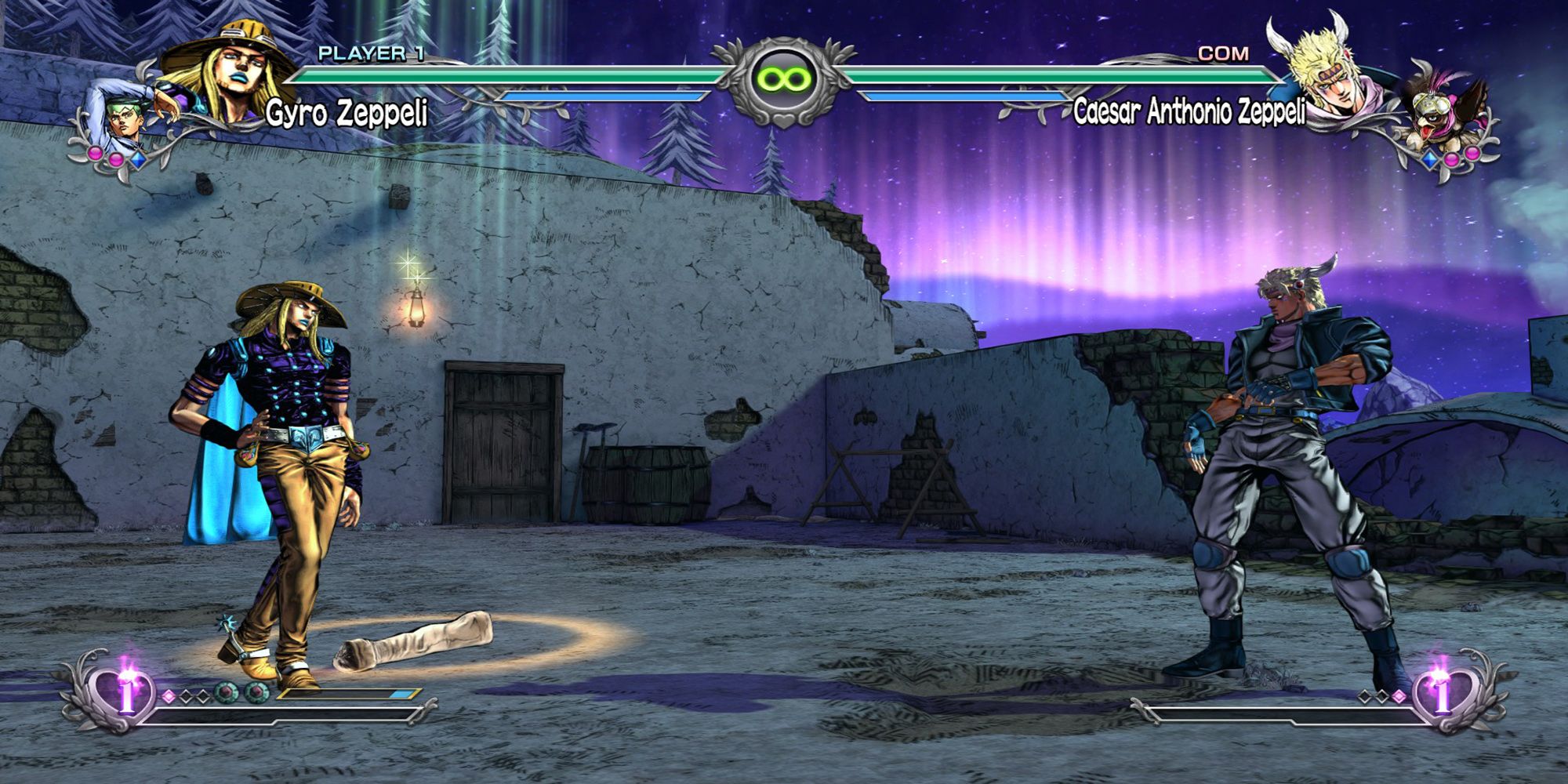 The Holy Corpse is a significant plot point in Steel Ball Run. Essentially, President Funny Valentine holds the Steel Ball Run race to scout the country for the various pieces of this corpse. Why such an ado for ancient limbs? The corpse grants powerful Stand abilities.

There are some caveats to the Holy Corpse mechanic. First, you can only equip corpse parts in User mode. Second, if a character holding a Holy Corpse part(s) gets downed, they will lose one part.

Tips For Playing As Mounted-Style Characters 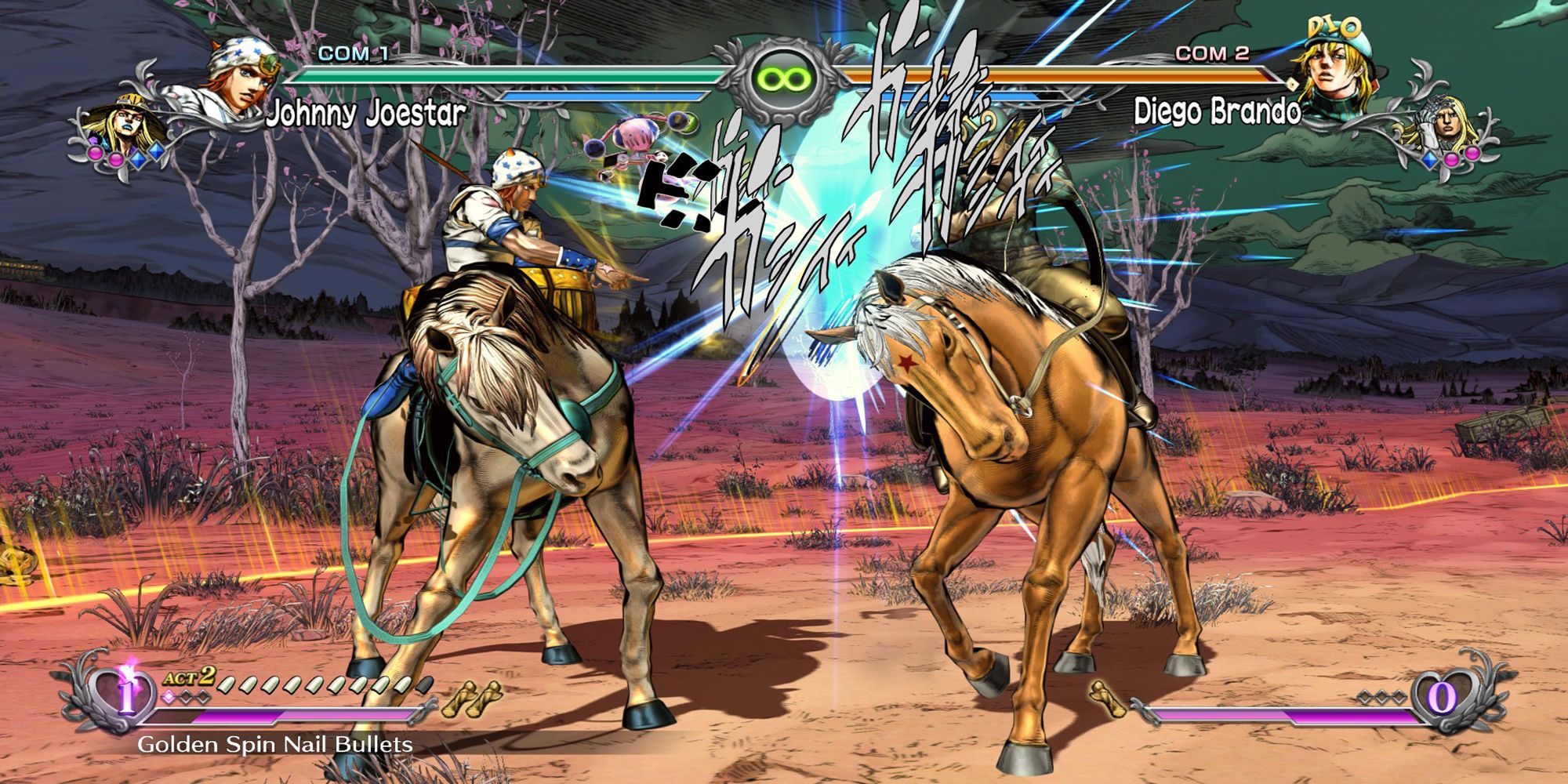 Mounted-Style characters are the most complex in the game. Each character can use ground-fighting and horseback techniques. Yet, besides these various tools, they also have their Stands' abilities. Then, of course, there are the three Holy Corpse levels one must also track.

Still, you can get a lot out of a Mounted-Style character if you study them well enough. After all, Mounted skills, like Johnny's "I can make it!" offer plenty of physical power. And racking up Holy Corpse parts can make you a formidable fighter. In short, these characters are tanks on their horses, which makes them as vulnerable as they are mighty.

Make Sure You Have Cover Before Switching To Mounted Mode

The hardest part about playing as a Mounted-Style character is staying on your horse. For characters who move fast on the ground, like Diego, falling off your horse is not the worst thing to happen. However, slower characters, like Johnny, become severely hampered.

So, what are some ways you can keep your Mounted character stable?

A strong defense is an excellent place to start. Stylish Guards and Evades can significantly help one avoid powerful downing attacks. Even some well-timed dodges are a decent option to stay out of an opponent's reach.

Another option is applying enough offensive pressure to secure a Quick Mount. However, this tactic requires the player to get into close contact fighting. Of course, you can Quick Mount out of a long-range special skill. Still, if your opponent also has a long-range skill, they can quickly intercept the Quick Mount before you get a chance to hop onto your horse. (This makes match-ups with zoners, like F.F., very challenging.)

Lastly, switch into User Mode and gather some Holy Corpse parts. For instance, Johnny and Gyro's Holy Corpse Level 2 allows them to disable knockback from an opponent's attack if one of their unique skills is in effect.

Each Mounted-Style Character Has Unique Stands: Study Them

Remember when we mentioned that each Mounted character's Stand was unique? Well, we're reminding you again. Stands like Tusk, Ball Breaker, and Frightening Monsters add more profound layers of gameplay to Johnny, Gyro, and Diego, respectively.

For example, let's focus on Johnny Joestar. His Stand, Tusk, has four stages of evolution called Acts. He can cycle through each Act with a series of HHAs or jump straight to Act 4 with his GHA. Furthermore, each Act can perform different attacks.

Suppose you wish to unleash an HHA on your opponent while Tusk is in Act 2. In this case, the Act 2 HHA, "Now I know where to shoot!" is only available in User Mode. If you are not privy to this essential detail, you'll find yourself stuck in Act 2, on your horse, perpetually whiffing your HHA. That kind of negligence will hand you over to your opponent's whims.

Therefore, when learning a Mounted-Style character, pay close attention to their Stand's skills. Doing so will elevate your gameplay with these characters, giving you further insight into when to stay on your horse and dismount.