You are here:
Home / Jojo’s Bizarre Adventure: All Star Battle R- How To Get Started With Online Play

Jojo’s Bizarre Adventure: All Star Battle R- How To Get Started With Online Play

When Jojo's Bizarre Adventure: All-Star Battle first launched in 2013, Hirohiko Araki's stylish manga series was one of the most popular in Japan but severely overlooked in the west. However, a lot has changed in the past ten years. For instance, an anime adaptation of Jojo's Bizarre Adventure, available to stream on Netflix, increased the series's worldwide popularity exponentially. In turn, Bandai-Namco launched ASBR, a vastly improved remaster.

There is much to love in ASBR for both fighting fans and Jojo fans. This new edition adds ten more characters to its roster, plus several gameplay improvements. With so much appeal, finding an opponent online is quick and effortless. Think you can take on JoBros from around the world? Then, we'll get you started! 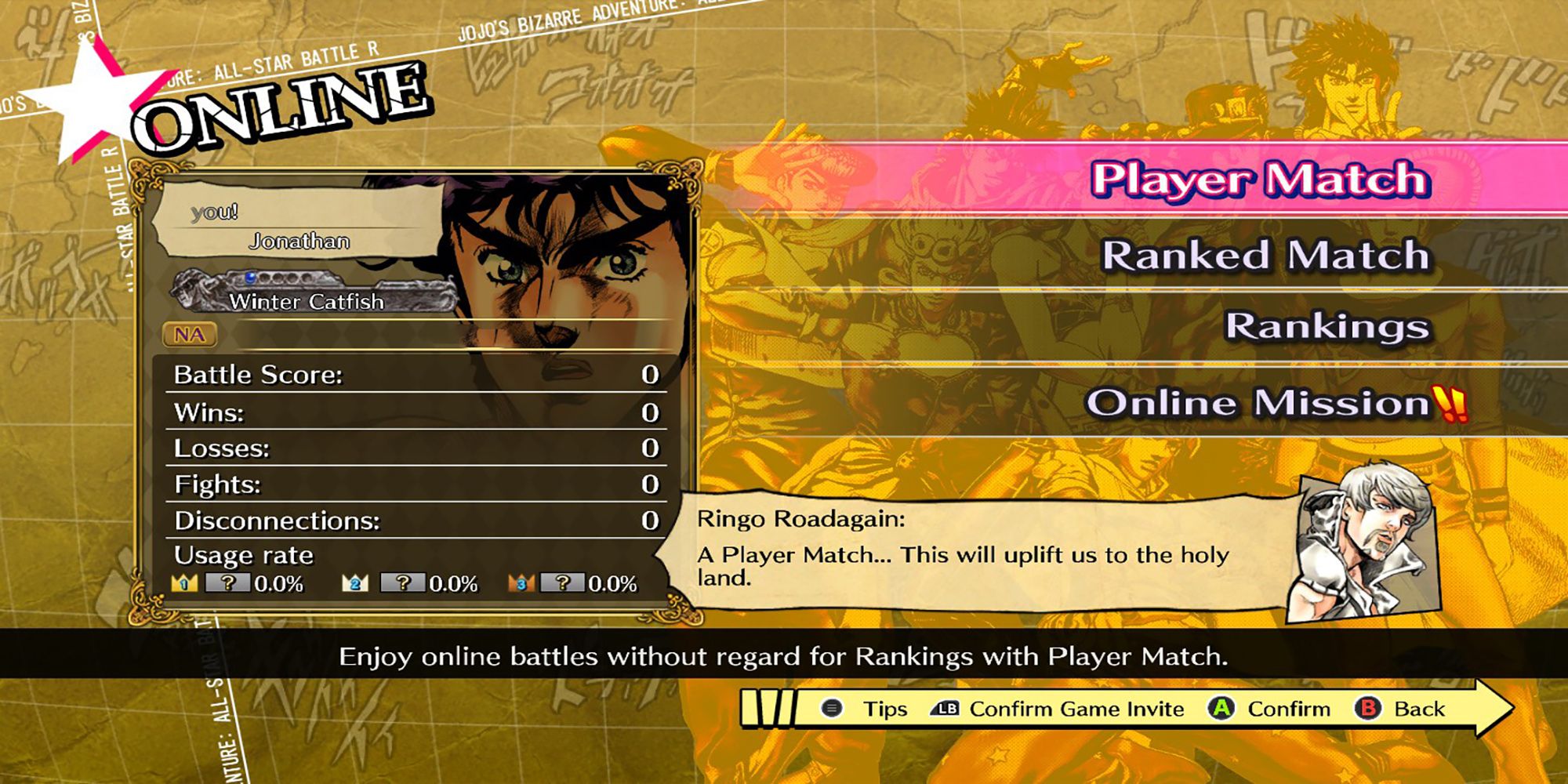 So, what can you expect from ASBR's online experience? Unfortunately, there aren't any groundbreaking online battle formats or boss raids. Still, you'll find all the standard online modes one would expect from a fighting game, including:

How To Set Ranked Match Presets 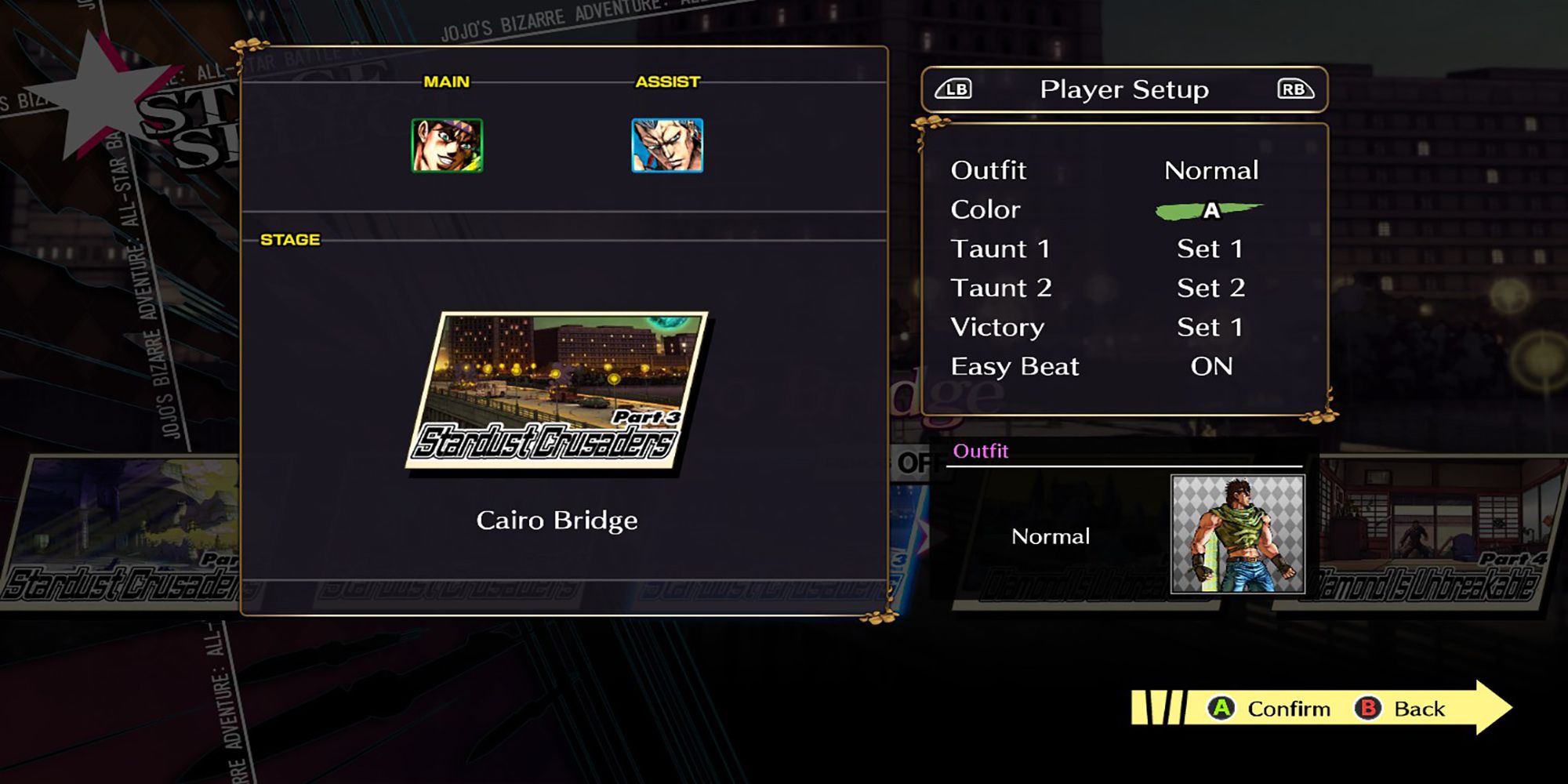 While Player Match settings are more lax, Ranked Match rules are rigid. For instance, the mode disables stage gimmicks, and players do not select a character before the match. On the contrary, before participating in ranked matches, you must assign a preset character, assist partner, and stage.

Selecting your ranked match preset is straightforward. All you do is select your characters and their costume, taunts, and victory quote. Then, you select a preferred stage. Finally, you will see an overview of your preset choices, which you can confirm or go back and edit.

Can I Change My Ranked Match Presets?

Suppose you're not having much luck maining a specific character online. In this case, it's possible to change your Ranked Match preset. First, open the Ranked Match menu. In the lower-right corner of the screen, you'll see there is a button you can press to view your preset. After opening your preset, press your controller's confirm button to edit it.

How To Find Or Create A Match 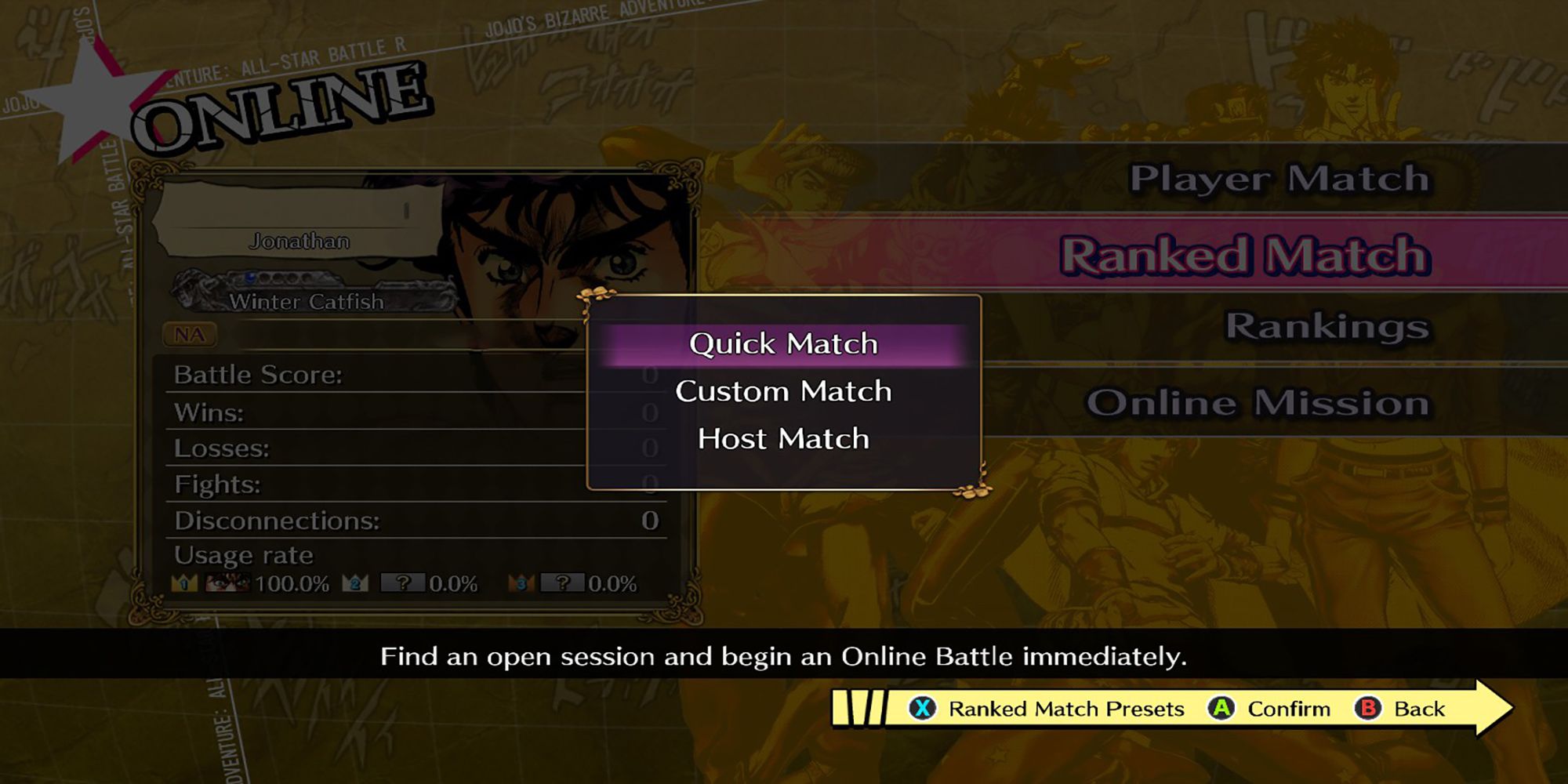 Regarding matchmaking, ASBR offers the same three options for Player and Ranked matches:

Custom and Host matches have different settings for Player and Ranked Matches. Here's a quick rundown:

What Are Player Cards? 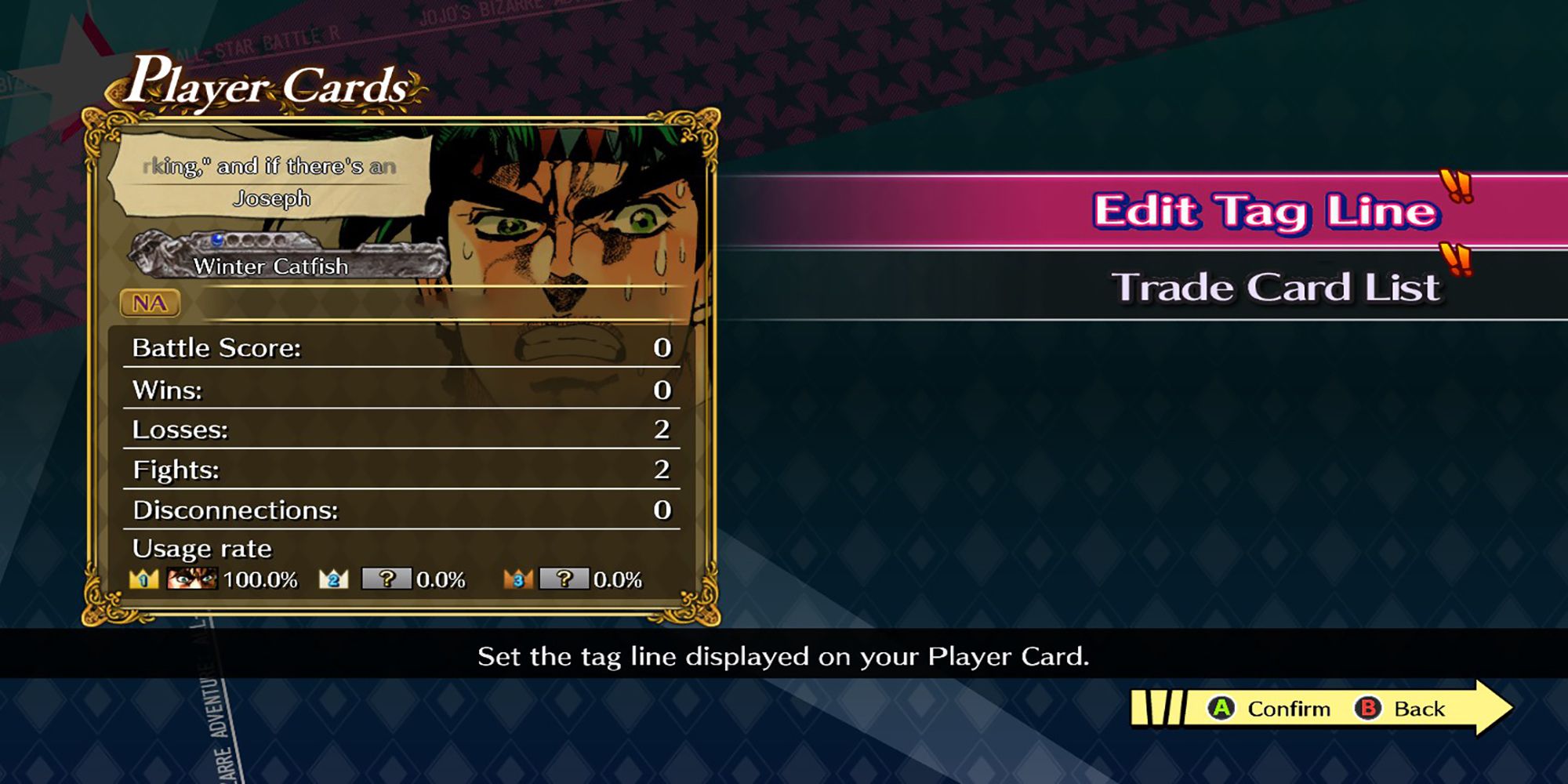 Player cards are short profiles that display players' battle stats, such as their Battle Score, wins, losses, disconnections, etc. You'll automatically exchange cards with another player upon matching. Then, when you wish to view players you have fought in the past, you can look them up in the Trade Card List, located in the Customize menu.

How To Edit Your Player Card

Most details on your player card cannot change. For instance, your card title represents your rank and only changes with your battle score. However, you can change the tagline on your player card. Tag lines are character greetings that play before an online match. They also headline the top of the player card with a portrait of the character they're quoting.

To change your tagline, select the Customize menu, choose Player Cards, and pick Edit Tag Line. Then, you can listen to tag lines and equip your favorite. Furthermore, you can buy new taglines from your favorite characters in the shop. 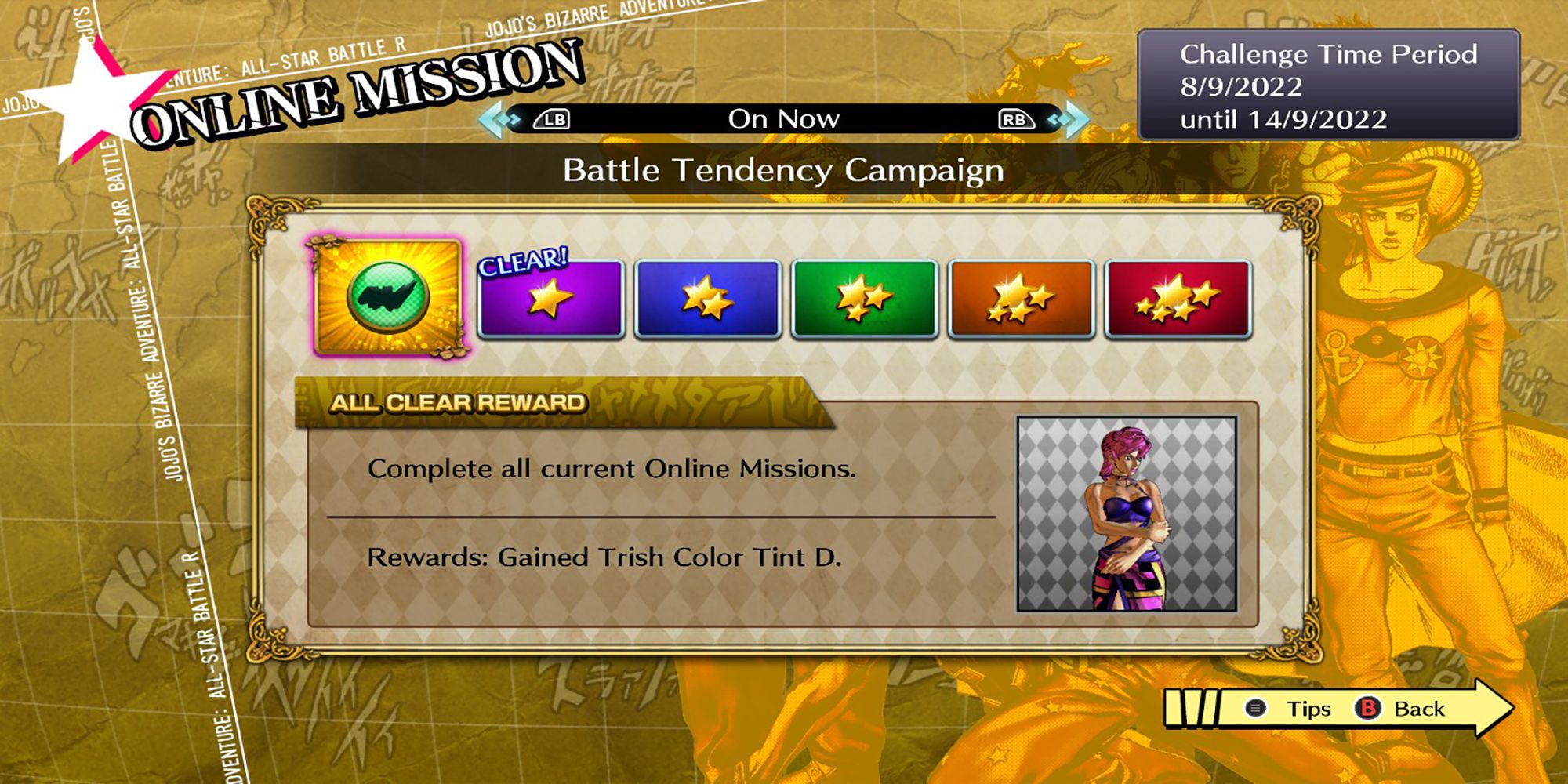 Online missions are objectives you can complete while playing online that grant rewards upon completion. Challenge sets rotate weekly and have five missions each. Completing a mission pays out a gold commission. However, completing all five unlocks new content, such as a rare character color.

You can check the online mission details at any time through the online menu. Furthermore, you can switch to the Coming Soon tab to review missions for the next week.

Does ASBR Have Rollback Netcode? 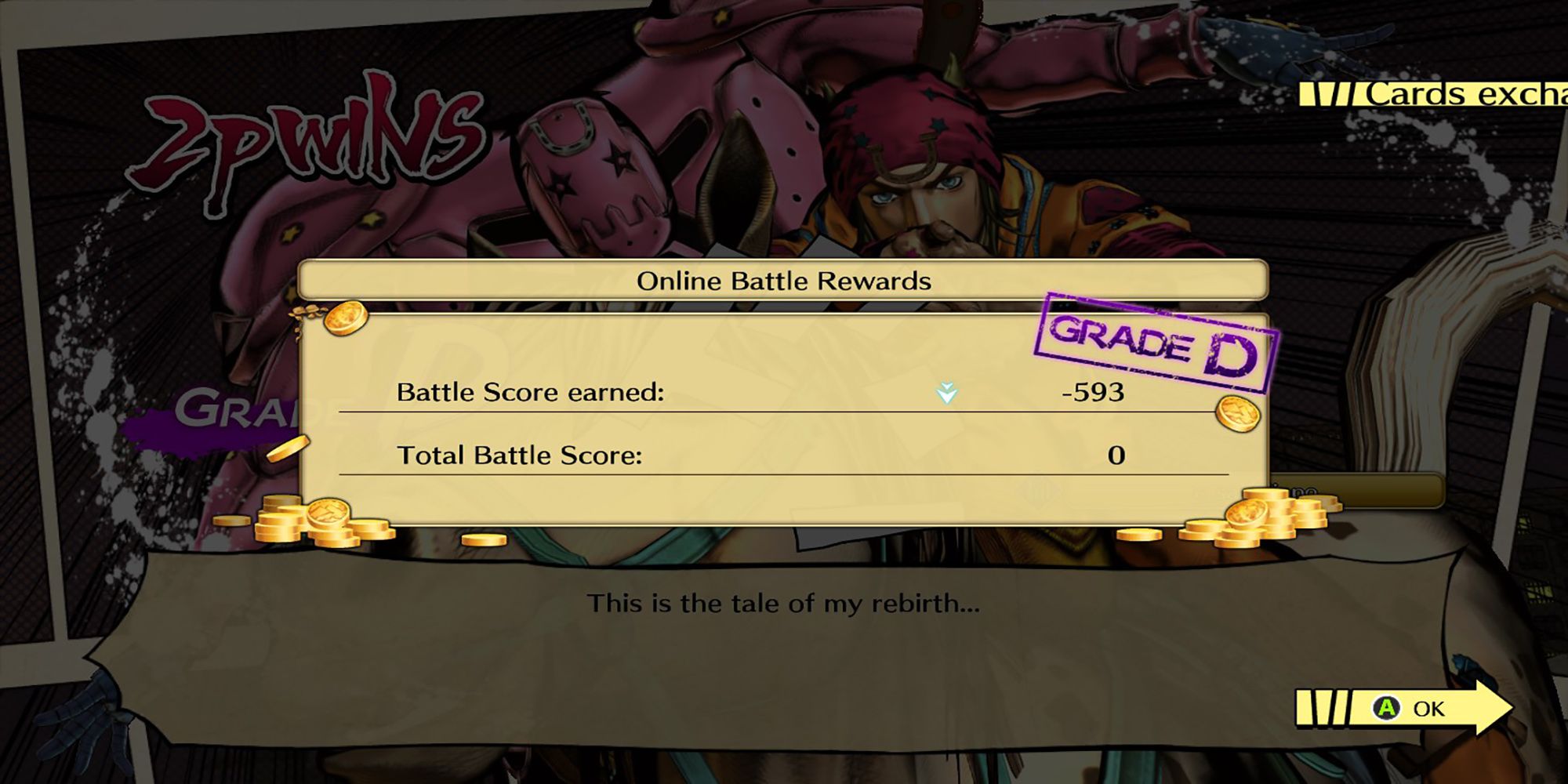 A fighting game is only as strong as its online code in the eyes of competitive players. Therefore, whether a game has rollback netcode can make or break its experience. However, while rollback netcode has been around for over a decade, the system was not embraced by Triple-A game companies until recently. For instance, Dragonball FighterZ, a Bandai-Namco anime fighter launched in 2018, did not get a rollback netcode update until 2022.

Since Bandai-Namco's experience with rollback netcode is sparse, you're likely wondering if ASBR has it. Unfortunately, the company confirmed that ASBR would not have rollback netcode. Instead, the game utilizes a delay based online netcode.