The emerging roguelike tactics genre has evolved quickly in just a few short years. 2018’s Into the Breach found the perfect blend of traditional turn-based strategy mechanics and a procedural roguelike structure, and we’ve seen the subgenre spin off in a dozen other directions since then. 2020’s Othercide introduced more modern tactical and roguelike systems, such as time-based initiatives and a bigger focus on meta progression via upgrades, while 2021’s Wildermyth set itself apart by emphasizing story and character. Inkbound, from Monster Train developer Shiny Shoe, expands the roguelike tactics genre in its own way, with more action-focused, Midnight Suns-like battles, and a multiplayer, live-service model that Shiny Shoe hopes will keep it fresh and exciting for years to come.

Inkbound’s most impressive feat is its ability to borrow so many ideas from other games and synthesize them into something that feels unique. A lot of its DNA comes from Monster Train and other roguelike card games, but rather than building a deck, Inkbound has you building a character sheet. Progressing through each procedurally-generated battle will net you additional stat points, magic items, and modifiers to your attacks that increase their power and efficacy. Though you start off with just a few basic abilities, you’ll inevitably end each run as a combo-building, AoE-damaging, status effect-inflicting demi-god. Roguelikes live and die by their power fantasy, and Inkbound has that part dialed in.

If you’ve played Marvel’s Midnight Suns, combat will be fairly familiar. Each encounter takes place in a small arena where waves of enemies spawn over time. You have a limited number of ability points you can spend on your turn to perform attacks or move to avoid incoming damage, and your goal is to clear the battlefield in the fewest turns possible while taking the least hits to your health pool as you can. At the end of each turn, a battle royale-style ring will close in on the battlefield, restricting your ability to move and avoid enemy attacks. Luckily, ability orbs spawn frequently around the arena, providing the opportunity to reposition and regain ability points frequently.

There’s just enough class depth and enemy variety to keep things interesting. The preview featured three classes – though many more will be available over time – that were all unique takes on traditional classes. The Magma Miner is a hammer-wielding tank that specializes in high-damage, short range attacks, the Mosscloak is a swift assassin that excels at applying status-effects, and the Weaver can attach itself to enemies with threads to do heavy, multi-target combo attacks. You won’t get big Midnight Suns cinematic cutaways for every attack, but slamming the hammer down and watching your enemies melt into inky blobs on the floor still feels great.

Each class has a unique kit of abilities, and you’re encouraged – through progression requirements – to swap classes frequently. Individual builds will vary from run to run, but playstyle doesn’t, so it’s necessary to play all the different classes just to keep things interesting. Multiplayer adds a lot of complexity though, and I found that, like most online games, it was a lot more fun to play with friends than to play alone. With one or two teammates, there’s a lot of opportunity to discuss strategy, figure out which targets to focus on, and synergize your abilities together. All players take their turns simultaneously, so you have a lot of freedom as a team to decide the best approach. Communication is key so that you can maximize your damage potential, avoid overkilling weak targets, and finish each battle as quickly as possible.

That becomes something of a double-edged sword the longer a run goes on though. You have to complete three worlds with three bosses and a final boss in order to finish a run, which means dozens of battles and more than an hour of playtime. By roguelike standards, that’s a pretty big commitment, and as the battles waged on my friends and I found ourselves communicating less and less due to fatigue and a desire to just get through the fights faster. 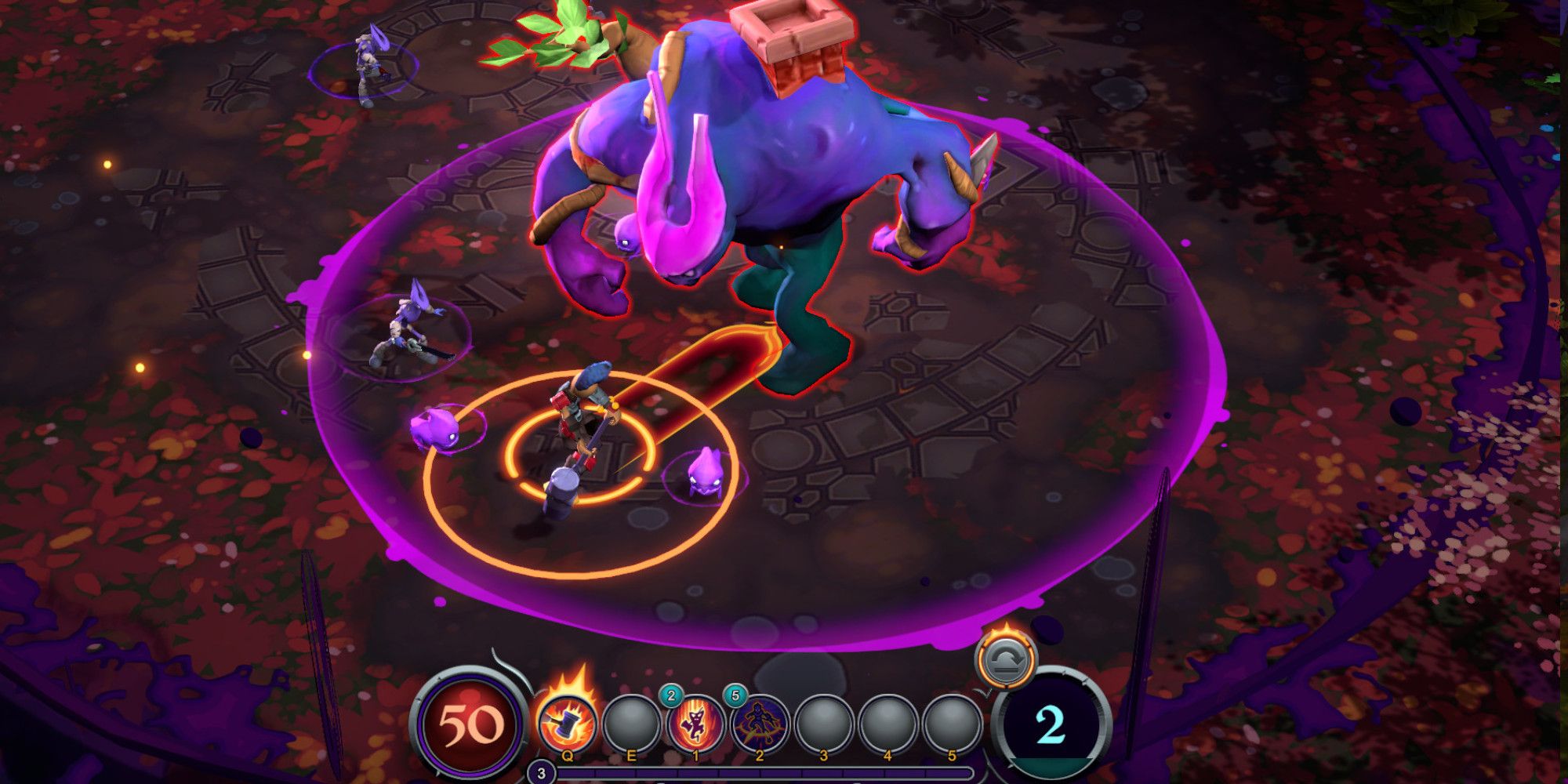 The live-service aspect is sure to raise some red flags, and I have some concerns about the model. Inkbound’s meta progression, like many roguelikes, requires you to complete quests across multiple runs to unlock new items, but it also has a heavy emphasis on cosmetics. As you earn experience points by completing quests your season rank increases, which unlocks new costume pieces and other cosmetic items. There will also be a battle pass and real money shop, and while I’m not worried that either of those things will get in the way of the gameplay, I do worry that the items for sale and cosmetic rewards just aren’t very good. I enjoy Inkbound’s vivid aesthetic, including its monsters themed like art supplies, but the design of cosmetics leaves a lot to be desired. With so much live-service competition out there, low-poly pink kitty helmets and bat wings don’t really make me want to spring for a battle pass, nor do they make me feel particularly motivated to earn season ranks by completing quests. Shiny Shoe has big plans for an evolving, ever-changing story and gameplay experience, but I’m not convinced this type of monetization will be able to carry it.

Monster Train excels at power progression, gameplay variety, and personality, and though Inkbound is a very different game, it has all of those same qualities. There’s some balancing tweaks it still needs, particularly around the length of runs and the difficulty in multiplayer – it’s so much easier with more players – but there’s a solid foundation here for another great roguelike tactics game. Whether it can succeed long term as a living game is the big question, but I have no doubt that Shiny Shoe will be able to deliver a solid experience when Inkbound launches on Steam later this year.