You are here:
Home / Immerse says VR training could help deal with the ‘great resignation’

The “great resignation” is rippling through the American workforce — with millions of people quitting their jobs. Virtual reality training is one of the things that might put a halt to that.

In a research report dubbed The Upskill Ultimatum, VR training firm Immerse found that 48% of employees said they would switch companies if they didn’t receive training. On top of that, two-thirds of human resources professionals and 61% of employees said that companies that fail to use modern training will struggle to retain top talent.

These points and more suggest that switching to VR training, which can be more engaging and less expensive than other types of training, could help alleviate this newfound mobility brought about by the pandemic, said Tom Symonds, CEO of Immerse.

“We work with large blue-chip organizations, helping them transform the way that they deliver training and assessment into their companies,” Symonds said. “Most forms of training have followed an established blend that has existed for 20 years, and it’s a kind of elearning meets the classroom hybrid. And so what we are helping companies do is really transform that blend, incorporating XR technology to enhance it because the outcomes are better. Engagement is much higher. Knowledge retention is better. Muscle memory is better developed using these technologies.”

About 64% of HR professionals and 58% of employees say that, in hybrid work, cutting-edge training such as VR can solve business challenges. But most companies are probably way behind. About seven years is the average length of time it may take companies to switch to modern training. 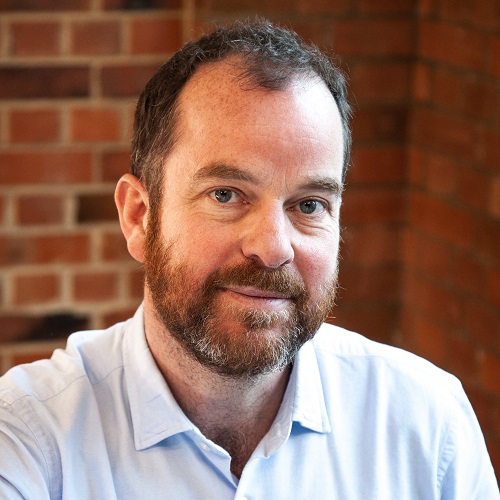 “These are significant challenges that most companies are facing. The key stat that came out of the survey is that the fact that nearly 50% of the people that we interviewed would consider leaving their company if they didn’t get the training they required,” Symonds said. “That’s a pretty alarming stat.”

The good news is that at least 38% of high-performing businesses use at least one form of immersive technology companywide, compared to 23% of low-performers. The lack of modern training leaves the door wide open for continued departures at a time when recruiting is in emergency mode.

The biggest barrier is often coming up with the initial piece of software for VR training. That cost is higher, but once that is done, then companies learn how to build more compelling training programs, and they also can more easily convince others that the training is effective. Once companies dip their toe in the water, the momentum picks up, Symonds said.

The companies that are now adopting VR training include big multinationals with distributed workforces that aren’t able to travel or get together in the workplace, Symonds said. Health and safety was the obvious starting point, but it’s spreading out from there. You can show someone what it’s like to put out a fire, rather than light a fire and train them to put it out.

VR training can save a lot of money in manufacturing processes where the cost of error is extremely high, he said. It’s also used in areas where the time it takes to get to competency is long. And some training platforms need outstanding graphics in order to depict a piece of equipment or a process with sufficient accuracy. Studies have shown the effectiveness of these technologies in boosting knowledge acquisition and retention.

The survey of 1,000 knowledge workers and 1,000 HR professionals across a range of sectors, conducted by Immerse, shows massive fractures in the current training landscape.

Above: Immerse found companies are taking too long to get to VR training.

Businesses are feeling the effects of this “learning drought,” with half of HR professionals reporting an emerging skills gap in their organization, resulting in operational company risk.

Immerse trains people with the Immerse platform, which enables companies to create, scale, and measure virtual reality training. The company grew its license revenues by 300% in the past year, and its global customer base includes DHL, Nestlé, NASA, AstraZeneca, and BP.

“The world of work has shifted beyond all recognition, and employees are looking to their employer to help them adapt. But the pace of change in training is not matching the pace of technological innovation,” Symonds said. “The pandemic has forced businesses into damage-limitation mode, and leaders are failing to take the long view when it comes to talent.”

“Our research reveals the urgent need for a training overhaul to prepare companies for a future that remains decidedly uncertain,” Symonds said. “Companies embracing immersive training technologies will be at an advantage in the post-pandemic world of work, bridging skills gaps, and supercharging employee engagement, productivity, and retention.”

“If you had spoken to me three years ago, I would have said we’re still in the proof of concept phase here. The Oculus Quest hadn’t come out, and that was a game-changing device. It’s wireless and we’re getting much greater processing power. The devices are becoming lighter. So you can deliver scalable solutions to the enterprise,” Symonds said. 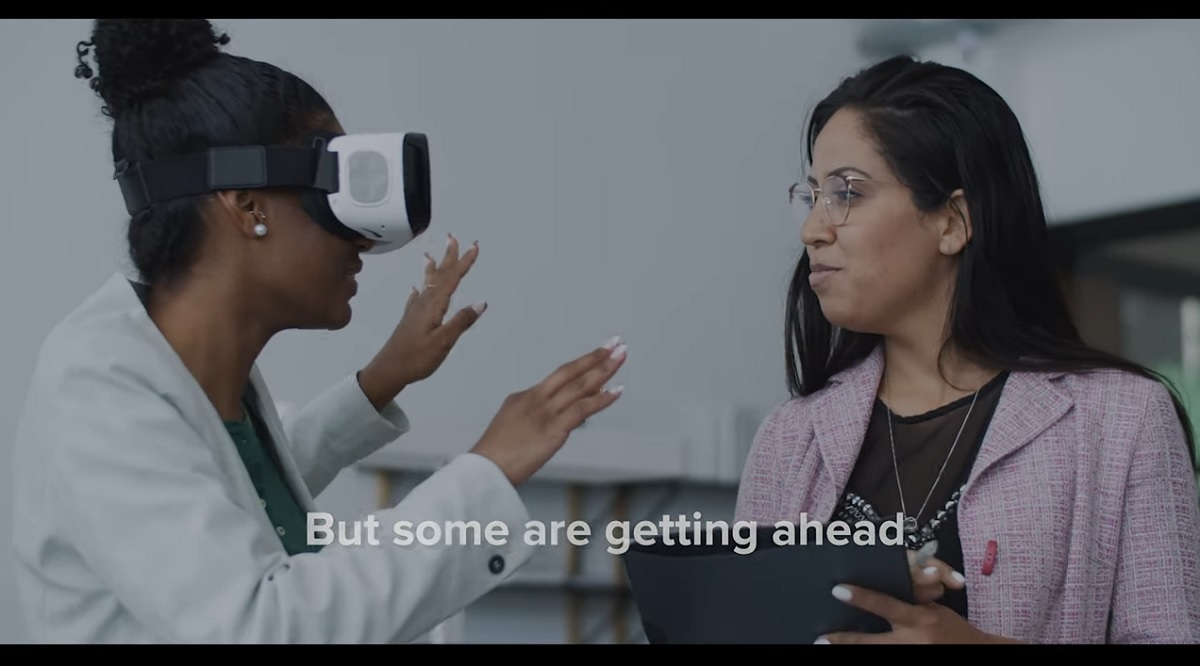 Above: VR training can help with the Great Resignation.

People were kicking the tires, Symonds said. A headset from Oculus, Pico, or HTC may cost $400 now, and each one can be used to train a lot of people. Software built with Unity’s game engine can easily run across the platforms. Other forms of training can cost thousands of dollars per employee, and the people available for training are also scarce.

“We’re now moving with all of our key clients into broad companywide deployment, where VR is being used not just in the health and safety domain but in areas like onboarding new employees,” he said. “It’s beginning to be used in other domains — the softer skills domains. So we have a really big program that we are rolling out with BP that is around diversity and inclusion.” 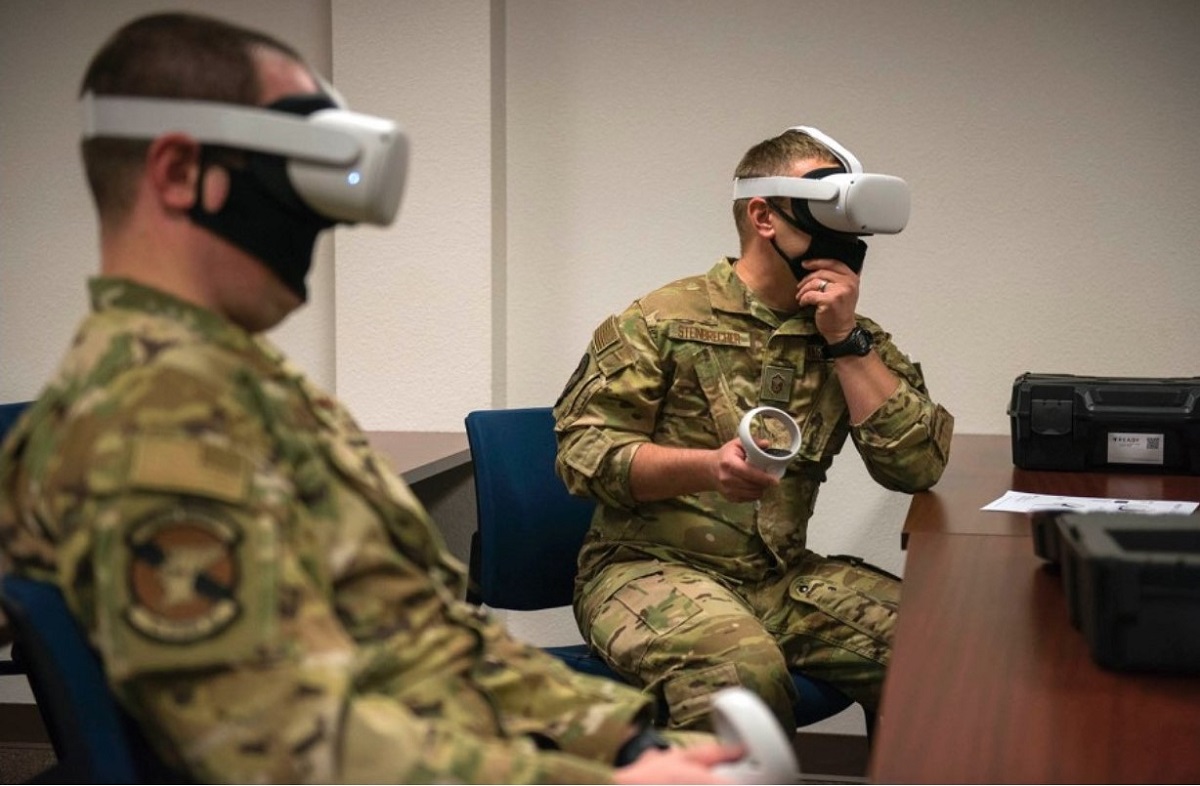 This study was based on surveys conducted in 2021 with 1,000 knowledge workers and 1,000 HR professionals in both large, established corporations with over 5,000 employees and mid-market businesses (1,000-4,999 employees). Respondents were based in the United Kingdom and the U.S. The study focused on the transport, CPG, pharmaceuticals, oil and gas, power and utilities, and professional services sectors.