You are here:
Home / I Want To Eat Everything In Pentiment

I Want To Eat Everything In Pentiment

When he's not illuminating manuscripts, solving murders, petting cats, or flirting with nuns, Andreas Maler is probably eating. Pentiment's protagonist frequently breaks bread with the residents of Tassing—not just to fill his belly (although that's a nice bonus), but to probe the villagers for potentially case-breaking gossip. Sometimes you can choose who to eat with, opening up lines of enquiry and unravelling story threads you'd otherwise miss. It's a handy investigation tool, no doubt. But these scenes also make me very, very hungry.

Pentiment's food is the most appetising I've encountered in a video game since the similarly mouthwatering rustic Scandinavian fare found in Skyrim. Every meal Andreas eats is unique in some way, but always delicious. Eat with a peasant family and you'll be treated to thick hunks of rye bread, slices of bergkäse (a type of Alpine cheese), and crunchy almonds. Dine with wealthier folk and you'll feast on salty pretzels, fat sausages, and bowls of egg pasta. All the grub you're served in the game reveals something about the people you eat it with. 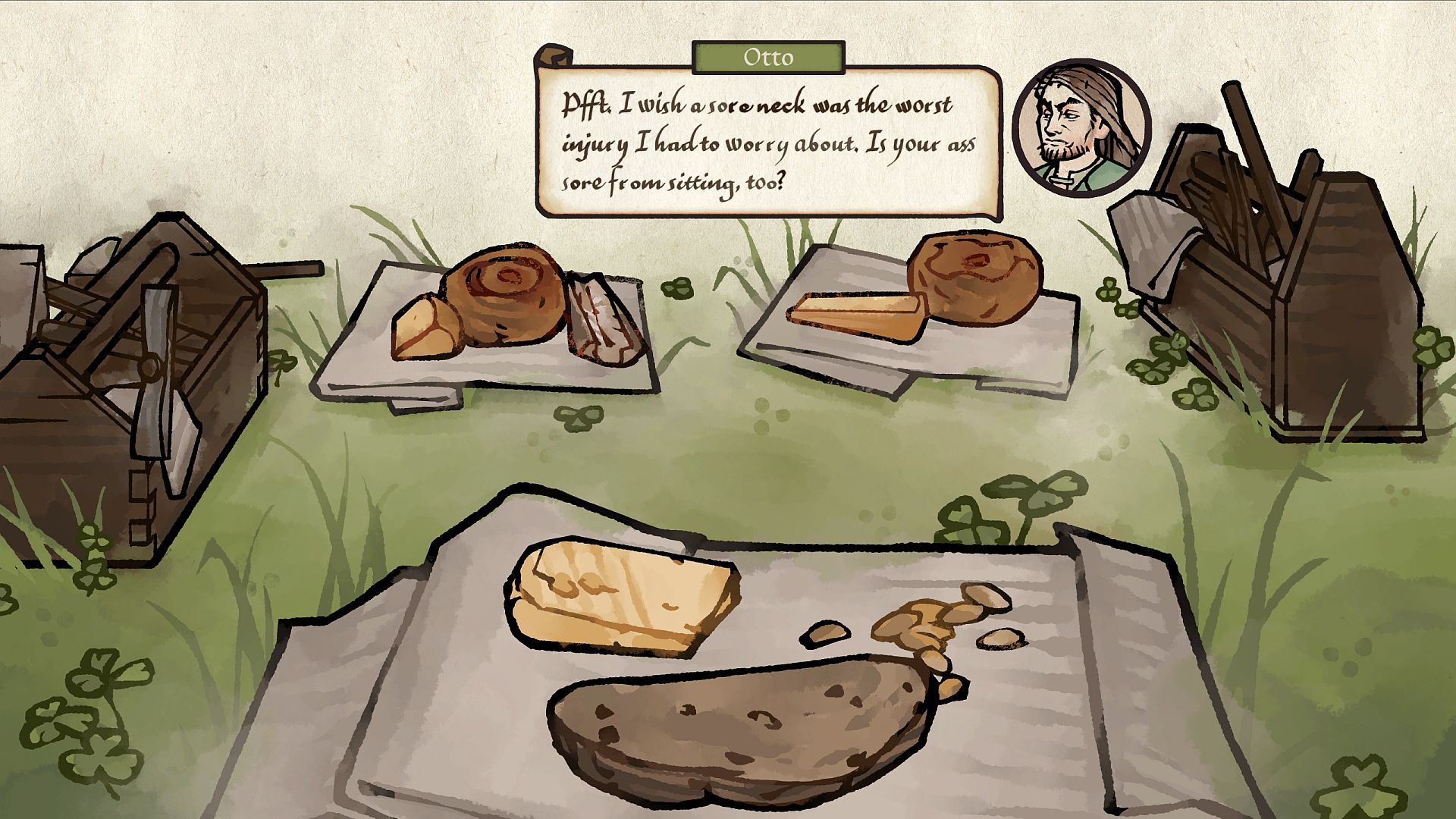 Also, next time you play the game and someone invites you to supper, pay attention to the plates on the table. Andreas will always have more than everyone else because he's a guest. A lot of these villagers are struggling to make ends meet and on the verge of ruin, but they'll always give visitors an extra slice of bread or handful of almonds. The rich afford you the same courtesy, but it's not quite the same sacrifice for them. When Andreas is invited to the abbot's dinner table at Kiersau Abbey, he has an entire roast quail all to himself.

The food on the table also shines a light on the inequality inherent in the game's setting. The abbey, which is perched on a hilltop above the village, owns the land. As such, the abbot taxes every soul in Tassing, filling the church's coffers and giving the higher-up clergy a relatively luxurious quality of life. If it rains the abbey is safe, but the water runs down the hill and makes the peasants' life hell, flooding homes and destroying walls. This is important world-building: especially for act 2, where the peasants' ire towards the abbey comes to a head. People let their guard down when they're eating. If Andreas shares a meal with Smokey, the village charcoal burner, he's so glad of this rare offer of company that the gossip comes spilling out. The abbey's monks and nuns get up to all sorts in the forest, he reveals. Some folk at the table will protest, saying this kind of talk isn't Christian, but they'll always be shot down. No one can resist sharing stories about their neighbours. These conversations are not only intriguing, funny, and revealing, but an invaluable source of clues for Andreas' investigation.

Our hero also wolfs down jerky, wheat bread, Emmental cheese, and pottage, a hearty peasant stew. Tassing may be plagued by cruel taxation, a mysterious killer, and the threat of violent revolt, but at least the food is nice. It's all authentic to the region and time period too. This is the kind of food peasants and nobles would have eaten in upper Bavaria in the 16th century. In my review I praised Pentiment for humanising history and making it approachable, and this tasty-ass food is a part of that. I could murder a rye and Emmental sandwich now.