You are here:
Home / I Played Some Great Indie Games At EGX 2022

I Played Some Great Indie Games At EGX 2022

When you arrive at a gaming convention, it’s quite easy to be dazzled by the gigantic booths on display, pounding music, and impressively long queues. At EGX 2022, the biggest draws were easily Sonic Frontiers and Street Fighter 6, a curse for anyone who likes to abbreviate those titles.

I have to admit, I wasn’t swayed by either – it was more exciting to walk through rows of indie game booths, staffed by eager game devs putting their babies out into the world and hoping that someone would pop by to sample their hard work. 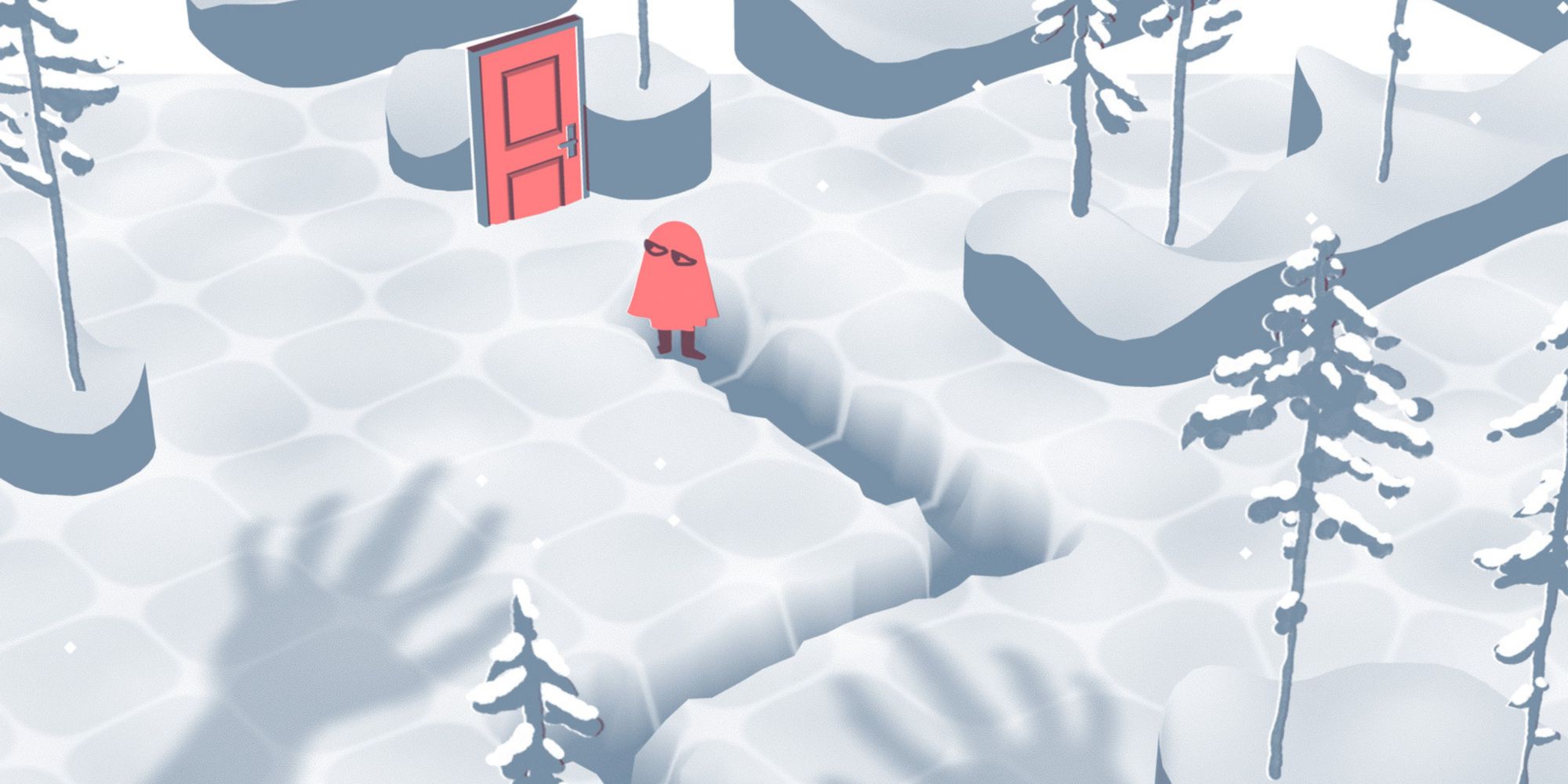 How To Say Goodbye

The title ‘How To Say Goodbye’ is incredibly emotionally charged, and for good reason. This narrative puzzle game is about grief, the afterlife, and dealing with the sudden and shocking curve balls that life – and death – can throw at you. I didn’t actually play this at EGX myself but watched like a hawk as our Lead Guides Editor Meg Pelliccio made her way through the demo.

Its presentation is inspired by classic children’s literature, with obvious artistic similarities to Tove Jansson’s Moomins series and Maurice Sendak of Where The Wild Things Are fame lending his name to the game’s protagonist. The result is a mishmash of tone with beautiful, bright, and stark environments, while the narrative deals with mature themes and serious, upsetting events. Don’t judge this game by its visuals.

How To Say Goodbye’s puzzles seem quite simple to grasp – the game has no tutorial and encourages experimentation. By clicking and dragging, you can move Sendak around the grids presented to you, and your aim is to help them reach the next door on their post-mortem journey. Difficulty gradually increases as you progress, adding switches, keys, and the like, which you’ll have to interact with. All the while, you’re confronted with figures from Sendak’s past who speak with them, offering advice, guidance, and a whole bunch of pathos.

You can play a demo of How To Say Goodbye and add the game to your wishlist on Steam. 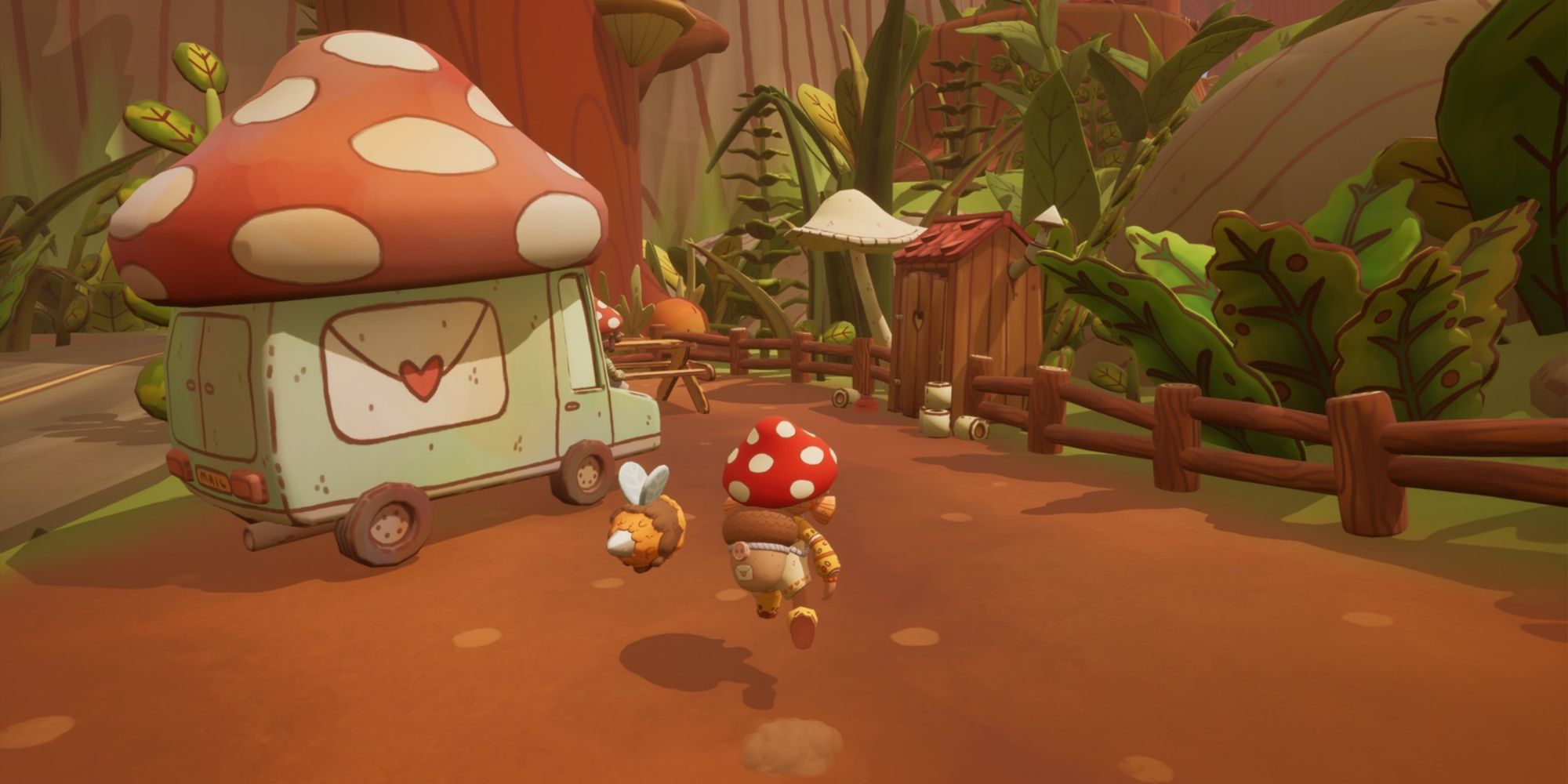 Putting you in the shoes of a newly hired mail scout, Mail Time is an adorable little game. It’s the very definition of chill, with gameplay amounting to fetch quests with quirky dialogue attached and some basic platforming. The characters and the writing are the stars of the show here, with each talking animal you meet overflowing with personality – I found myself smiling at the dialogue a lot, even if I found it a touch on the cheesy side.

Something I adore about the game is the character creator. It’s very flexible, the hairstyle icons being forest plants is genius, and the ability to choose your own pronouns (and change them at any time from the menu!) is incredibly nice to see. It’s all a little bit basic, but I don’t think simplicity is necessarily a bad quality to accentuate.

You can add Mail Time to your Steam wishlist today. 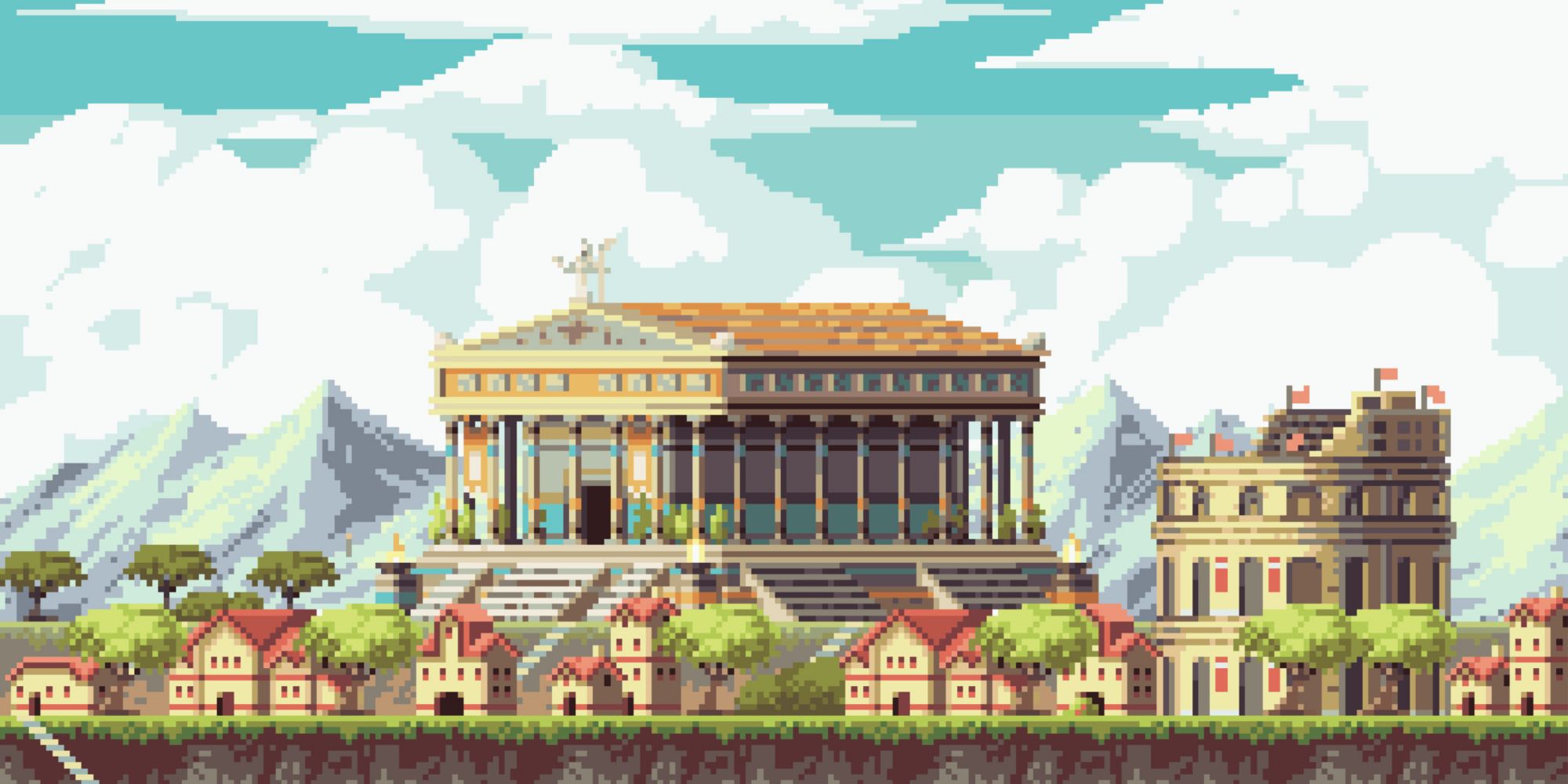 LakeSide has been on my radar for a while – I love city builders, and this game, which has you building a settlement on an island in the middle of a lake, captivated me with how detailed and painterly its pixel art is. Getting to play through a few years at EGX was a highlight for me – it eases you into its mechanics gently and naturally, tutorialising through immersive quests and letting you make mistakes without being punished. Your city’s population and store limits are based on the buildings you construct, and you have to finely tune how eager you are to harvest the natural resources available to make sure you don’t strip the island bare. There’s a layer of strategy that keeps things interesting while simultaneously never impinging on the cozy vibes.

I’ll reiterate that the presentation is exquisite. I spoke with Martyn Stonehouse, Lakeside’s sound designer, who explained that Kirokaze, LakeSide’s pixel artist, produced so much beautiful art that they couldn’t help but use it all. This means you can expect a huge range of architecture and artistic styles when you build a city, giving it a hefty dose of personality. While I wasn’t able to get a good listen to the game’s soundtrack at EGX thanks to how noisy and chaotic the event was, having finally listened at home, I can safely say that it’s a perfect match, with calming melodies that, in me, evoke a feeling of cheerful nostalgia. 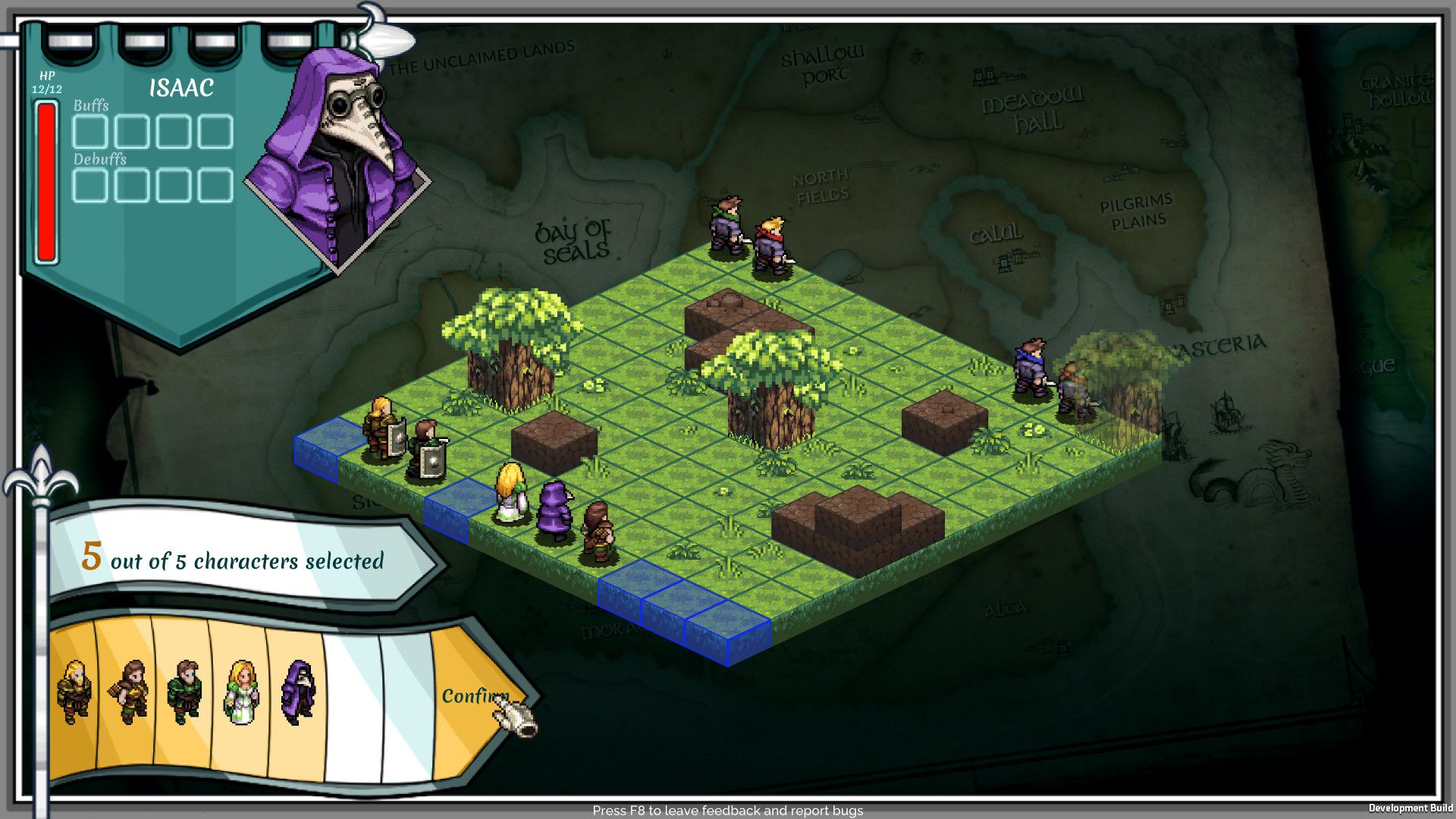 Live By The Sword Tactics

I love a good tactical RPG. Live By The Sword Tactics wasn’t on my radar at all before seeing its booth, but it’s been available in Early Access for over a year at this point. It’s a shame that the game hasn’t found its audience yet – the demo proved to me that it’s had a lot of thought and love put into it, and that dedication more than pays off.

Live by the Sword features a lot of the genre staples – a class system, lots of build customisation, and an emphasis on team synergy – but it has some innovative ideas, too. The inability to move more than one level vertically per turn isn’t something I’ve seen before, which adds another layer of strategy, and the dev’s dedication to online PvP intrigues me so much that the game is already in my Steam basket.

I can’t speak to the full experience’s difficulty just yet – and I believe that’s the make-or-break aspect for a strategic RPG – but the short time I spent with it edges me to the early conclusion that it’s a hard one. Even the first few story battles punish you rudely for mistakes, making it seem like veterans will enjoy this more than complete newbies.

Live by the Sword Tactics is in Early Access on Steam. 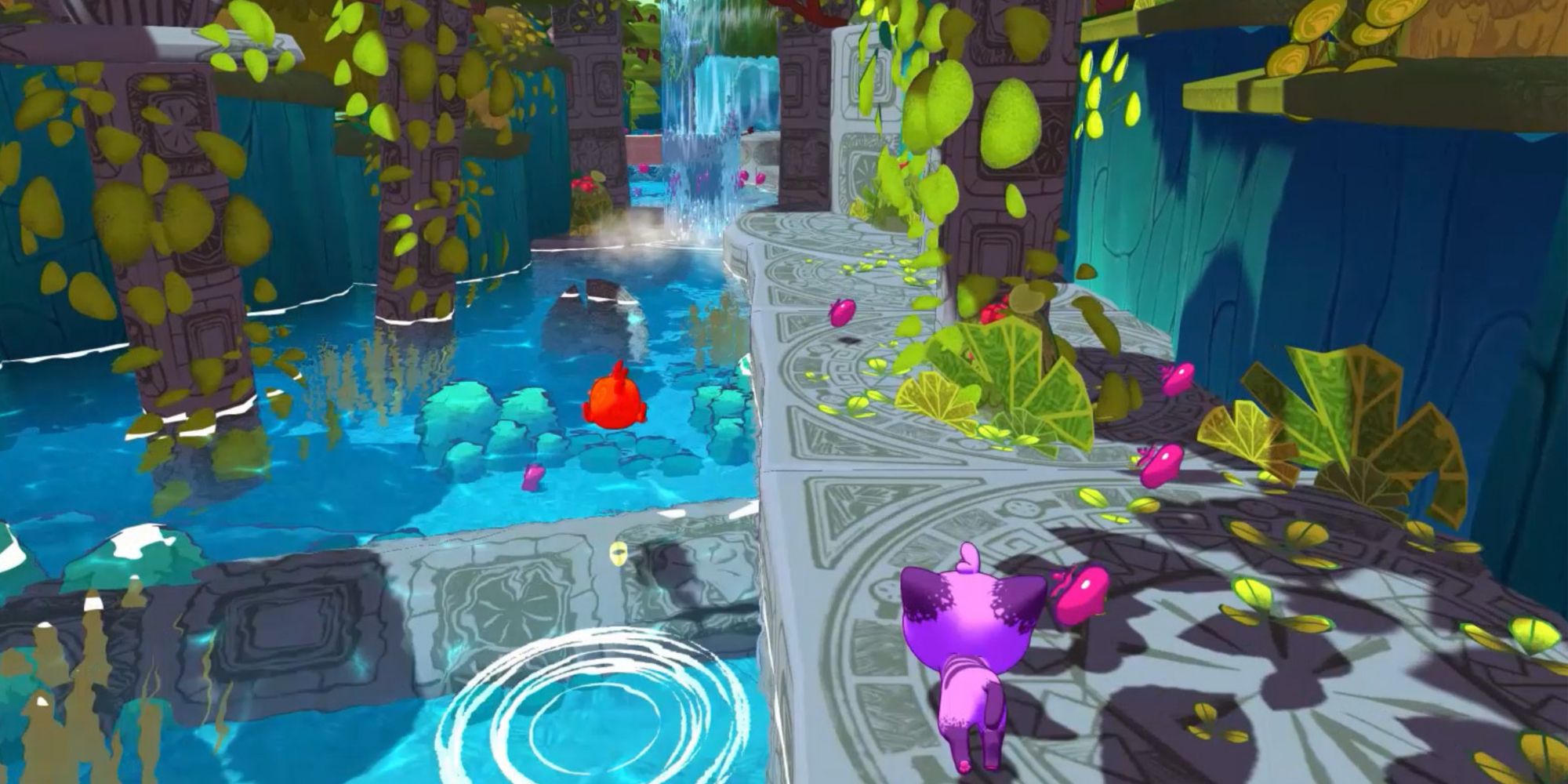 It’s difficult not to draw immediate comparisons between River Tails and It Takes Two – they’re both asymmetrical co-op platformers with plenty of puzzles to keep things interesting. Instead of a bitter couple, River Tails features unlike friends Furple and Finn – a cat and a fish, respectively. With a pal (or on your own, as a single-player option seems to be planned for the game), you’ll have to open gates, avoid predators, and platform through levels by working together.

One thing I really enjoyed was how different the characters are. Furple’s domain is land, so expect to be leaping over gaps and opening gates in the water, which is where you’ll find Finn, who has to leap over land and raise platforms for their feline friend. Danger is rampant – cats cannot survive water, and neither can fish if a bigger fish comes along – much of River Tails involves making safe passage possible for your friend, which leads us neatly to the puzzles. I played this game with TheGamer’s Lead Guides Editor at EGX, Meg Pelliccio, and I hope she doesn’t mind me exposing the fact that we actually struggled quite a bit with one of the early puzzles – but solving it felt like a real triumph of teamwork, and it seems like River Tails will shine brightest in these moments.

It’s worth noting that while there will be a single player option to help those without immediate company enjoy the game, there are no confirmed plans to implement online co-op – it’s a couch co-op experience only, at the moment.

You can add River Tails to your Steam wishlist today.