You are here:
Home / I Ate The Halo Infinite Gummy Worms So You Don’t Have To

Time for some games wormalism. For those who aren’t in the know, that is journalism on worms that happen to take inspiration from video games. It’s a burgeoning field, and one with very few experts dedicating their time to its many intricacies.

Have no fear, for I am here to right that wrong. Today we are looking at some Halo Infinite gummy worms which heroes like Master Chief will need to sustain them when finishing the fight and being all sad about his dead artificial intelligence wife. Keep your chin up, Spartan.

I don’t eat sweets very often, but have a strict duty to deliver a verdict on whatever gaming confectionery cross my path. So let’s dive right in and see if these worms are worthy of activating the Sacred Rings. 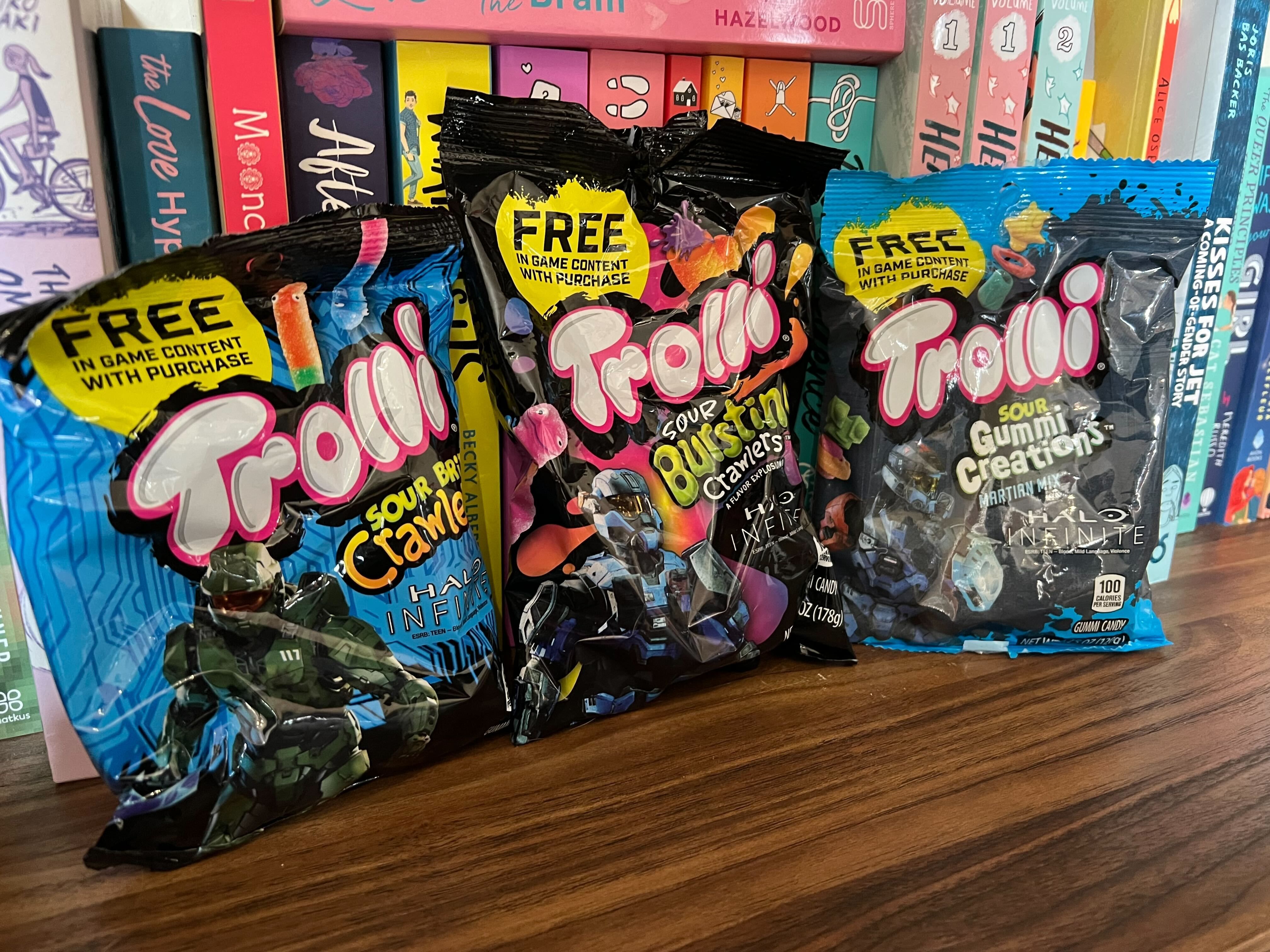 I might have lied a little. Because this first pack doesn’t contain any worms at all, but the taste, texture, and feel of each sweet is almost identical. These buggers are covered in sugar and smell of everyone’s favourite synthetic fruit flavouring, but come with a unique gimmick. Much like the Forerunners pieced together the installations, you can take different body parts here and make your own cute little aliens that never want to stick together.

These aren’t soft gummy sweets though, instead a little harder and covered in sugar and make a complete mess of your hands. As a consequence, I’d rather just eat them right away instead of turning them into a short-lived art project. The synthetic taste is rancid, but a fruity sweetness lingers on the tongue if you don’t mind sucking on these bad boys for a bit. I might be a prude, but I prefer sweets that are a bit less complicated. Don’t play with your food, kids!

The large majority of the Halo Infinite line – or at least the three bags I have to sample – are sour in variety. You won’t struggle to eat them, but there’s a definite kick to consider here.

Next up is the Sour Brite Crawlers which come in both normal and berry varieties. Sugar burns into your tongue, and I can already feel the corn syrup solidifying in my arteries.

I’d feel bad calling these gummy worms basic, but that’s precisely what they are. You’re getting a selection of predictable flavours without much of a twist, and the sour twang doesn’t do much to lift them out of mediocrity. The texture is much improved though, with each worm having the decency not to leave your fingers coated in an avalanche of sticky sugar. If you’re going to go for this variety of worm, make sure it’s the berry flavour. 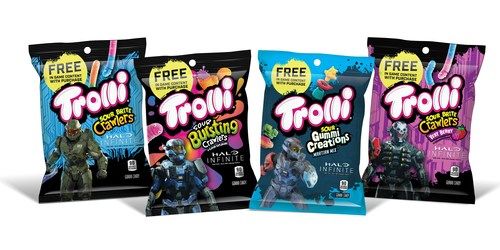 If the Martian Mix is The Covenant, and the Brite Crawlers are the UNSC, then Bursting Crawlers are definitely The Flood. These things are nasty. Not only are these bulbous wrigglers drenched in the same sugar as the Martian Mix, they also hide a gooey surprise.

I recruited the help of my cats for this one. Fun fact: feline taste buds don’t have the nerves and cells required to comprehend the sensation of sweetness.

We opened the bag and Amity and Adora (read: my cats) descended upon me, eager to sample the edible insects we were about to unleash. They gave them a sniff, a lick, and ignored them before trying to rummage into the bags for even more. I would advise against letting your kittens cover themselves in gamer sugar. At least it was more fun than eating them. The sweets, that is. It might be the corn syrup, but the juice inside these grubs is harsh on the tongue and I couldn’t eat more than a few of them before giving up for good. Maybe I’m getting old. 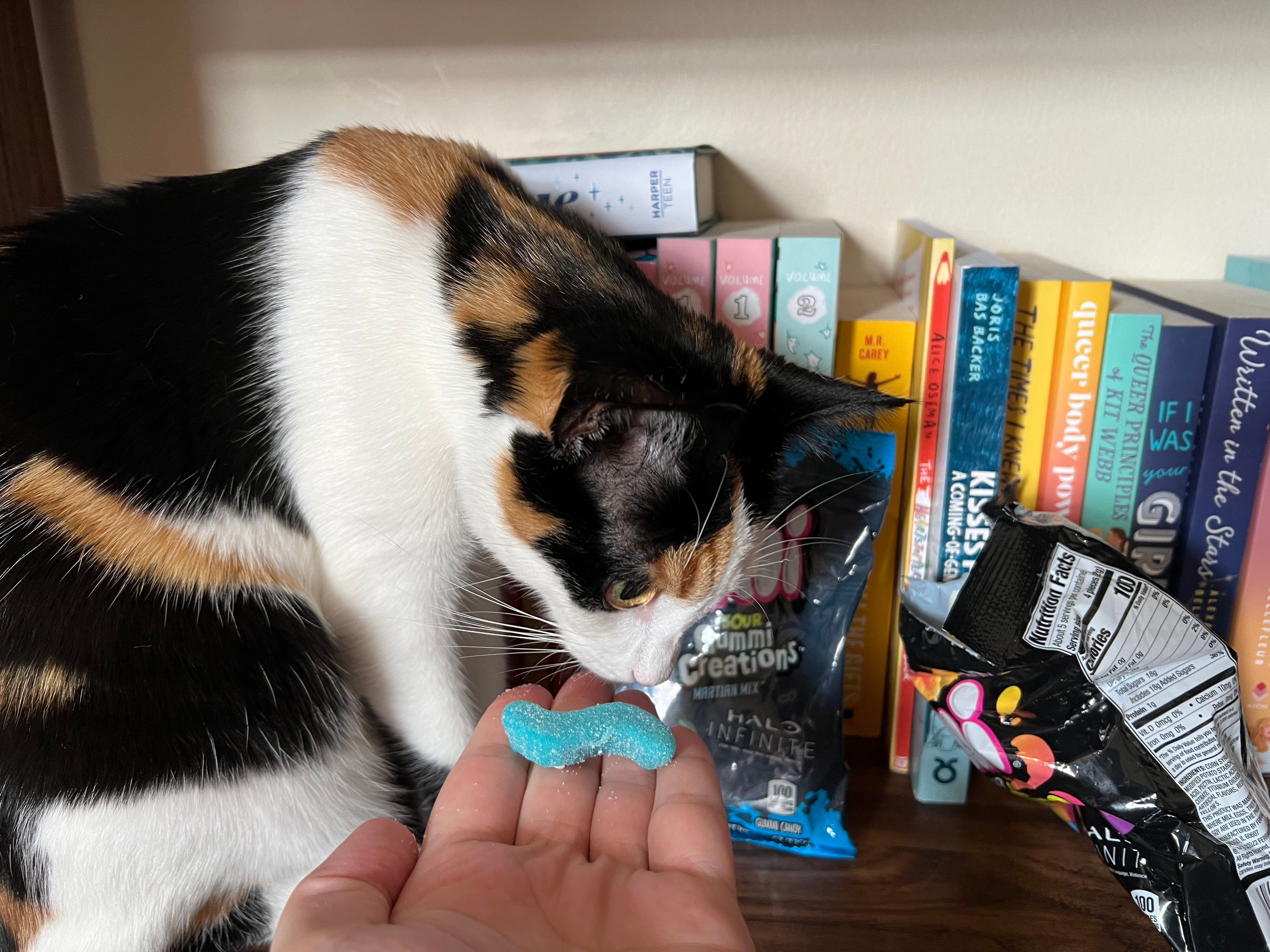 All of these Halo Infinite packs, at least for a limited time, are offering unique in-game cosmetics too. You just need to register your receipt online. Given how far away the third season is, fans need everything they can get in order to keep things interesting for now.

But there you have it – an important piece of games wormalism that I will definitely be building upon in the future. Master Chief would be so proud of my achievements.