You are here:
Home / How To Follow The Flowchart In Birushana: Rising Flower Of Genpei

How To Follow The Flowchart In Birushana: Rising Flower Of Genpei

It's not that Birushana: Rising Flower of Genpei is a needlessly convoluted visual novel. It tells its sweeping tale, with five major resolutions (each with a healthy dose of beheadings and the like), in an easy-to-grasp fashion all-the-while tasking its players with making colossal decisions for lovable heroine Shanao. It also touts numerous systems familiar to most visual novel enthusiasts, and especially fans of the otome subgenre.

But one of those, the flowchart, can be intimidating at first. Not because it's some kind of sprawling web of crisscrossing links (it isn't), but because, even with its clean columns and clear divergences, it doesn't tell you much. Less information is provided, at least at first, than tends to be customary among VNs.

Understanding the Flowchart in Birushana 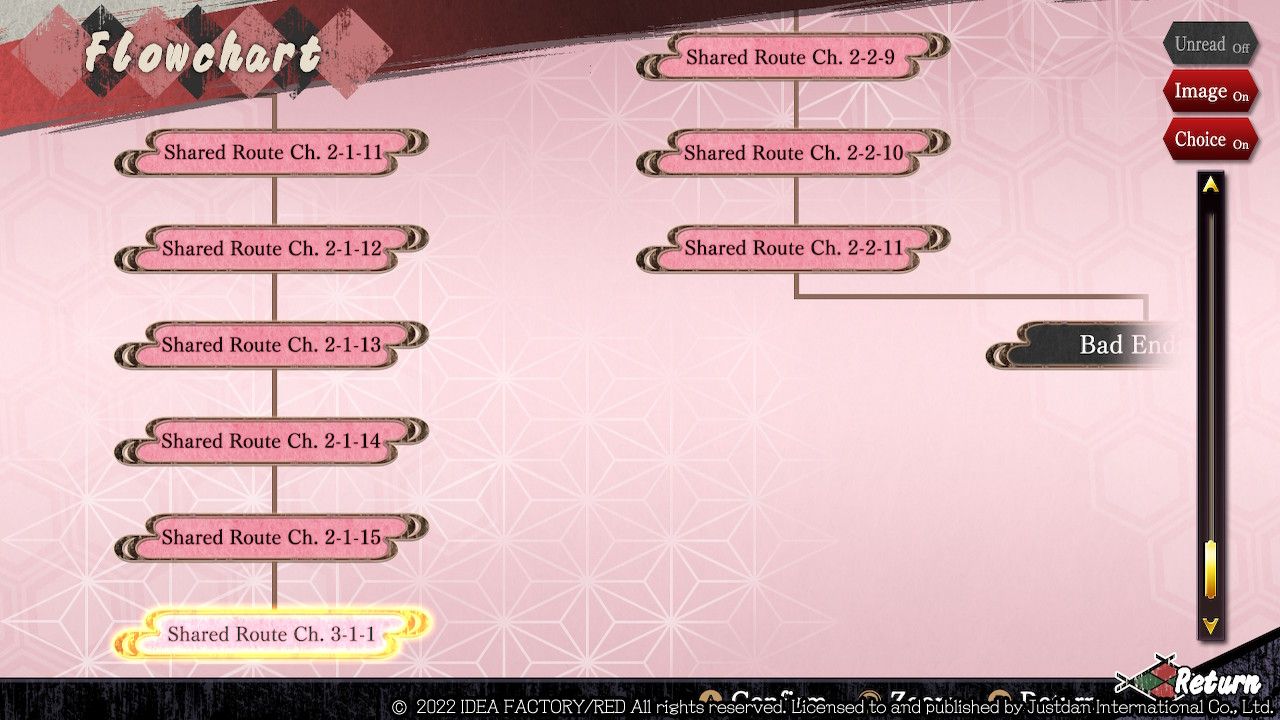 To begin with, note the vague subtitling behind nearly every point in the flowchart. (Each point corresponds with an individual scene; scenes that lead to each other are listed top-to-bottom to denote their relationship.) "2-1-13" and "2-1-14" are better understood once you get the hang of how to read their names. "2" is the chapter. "1" is a branching route within the chapter. "13" signifies the 13th scene along this chapter's path.

The above screenshot is quite early into the game, but let's compare it with something even earlier: 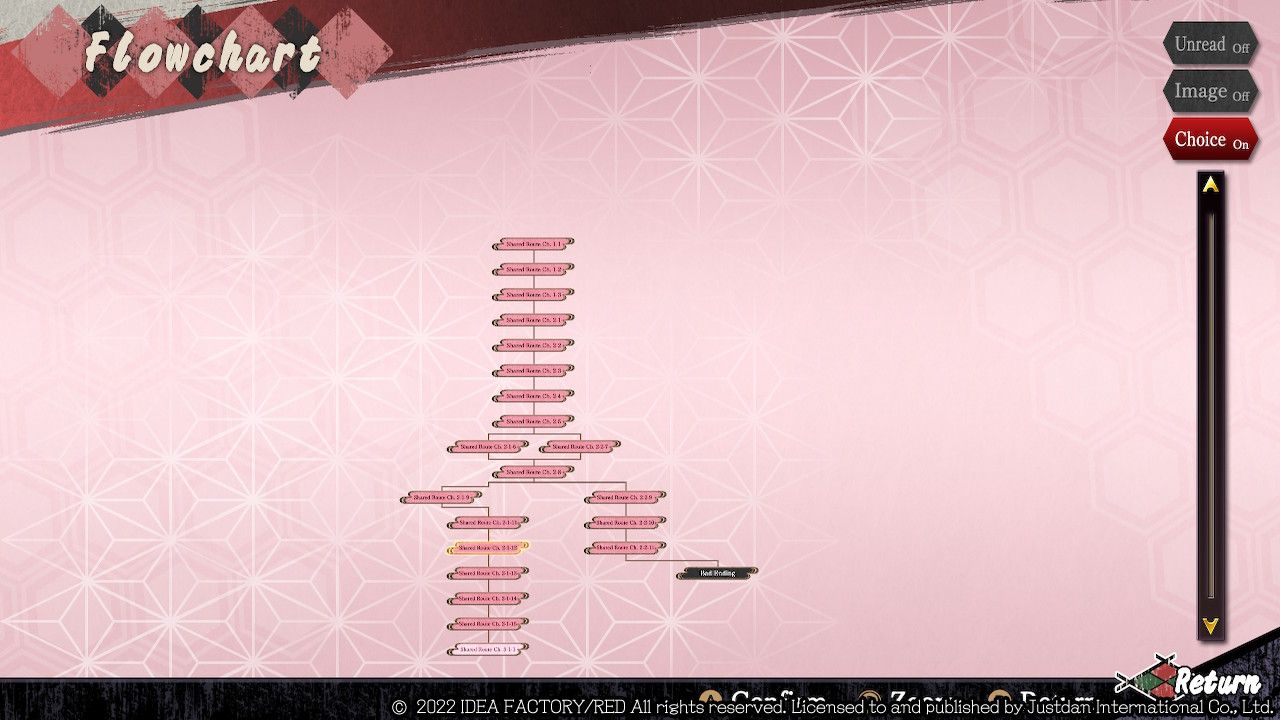 We've zoomed out now, which you can do with the proper button prompt, and you can see how the beginning of Birushana is a straight line segment of one scene followed by the next and so on. Chapter 2-5 is the first divergence point in the game. See how "2" is still the chapter, and "5" is still the scene number, but the middle number is missing?

That's because no branching has occurred yet. "2-1-5," on the other hand, would indicate that there are least two paths in play already ("2-2-5" being an example of another). But since no divergence has happened, there needn't be a middle number.

Recognizing the Start of A Main Route 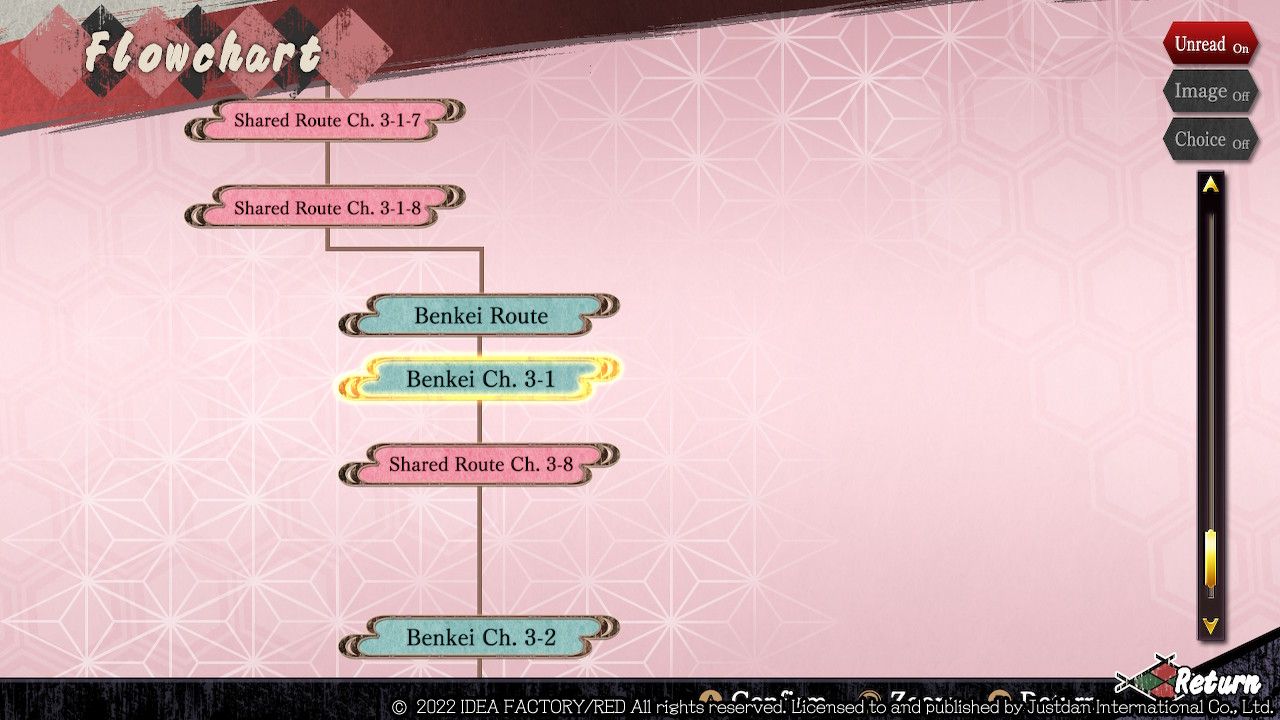 Thus far, everything we have shown you has pertained to the earliest content in Birushana: Rising Flower of Genpei. But starting around the third chapter, certain actions on the player's part (and thus, Shanao's part) will split the flowchart in the most profound way of all.

You will know you've locked in one of the five romance routes for the remainder of the game once the pink "Shared Route" tabs stop appearing, to be replaced with a uniquely-colored route titled after the character in question. In Benkei's case, this is a light blue; it's almost an aquamarine, really. But however you classify it, you should probably recognize the diference between the two. 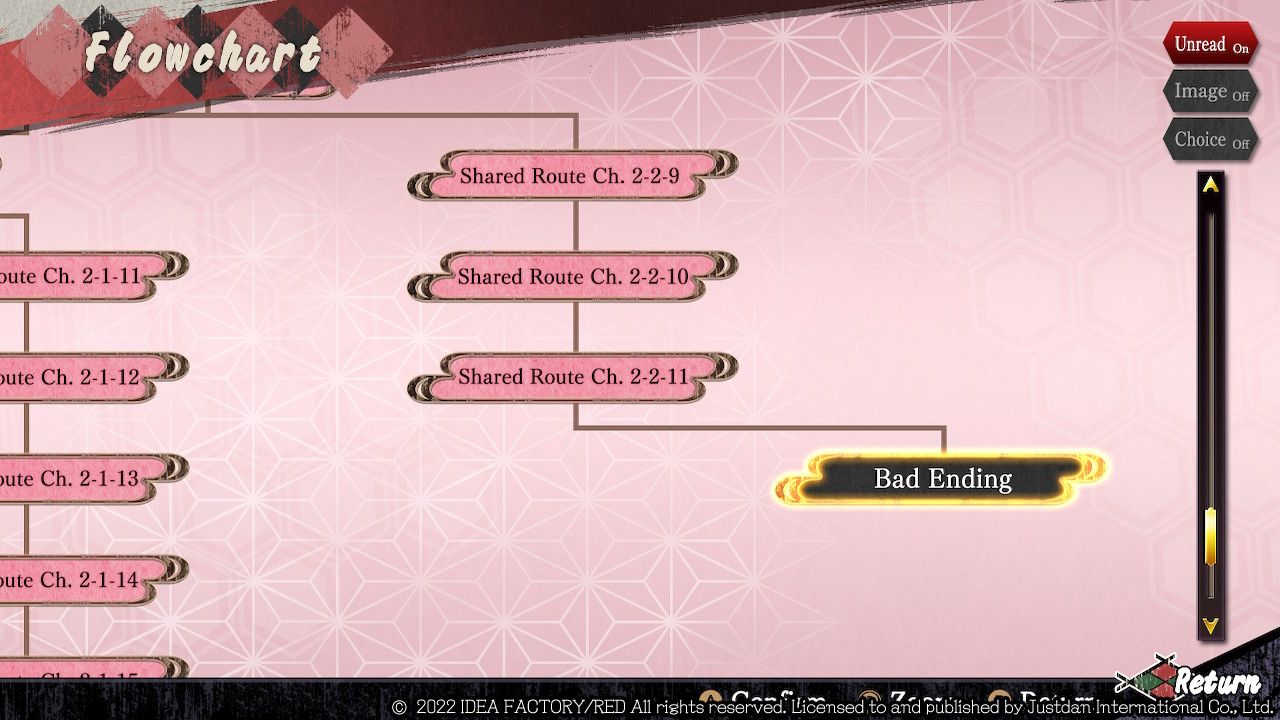 Once you're committed to a path, there will be multiple routes, the majority of which will result in a relatively happy ending. But there will be a few perils along the way, repeated choices that can lead to disaster. The first of these "bad endings" actually sprouts up during the Shared Route chapters early on. (Hence the unfortunate soul who suffered the above.)