You are here:
Home / Hollow Knight: How To Get Every Mask Shard

Hollow Knight: How To Get Every Mask Shard

The kingdom of Hallownest is a dangerous place, and a single point of health can mean the difference between life and death. With this guide, you will have plenty to spare.

Hollow Knight pulls no punches with its difficulty, with even the weakest of enemies being able to pose a threat to those that underestimate them. The Knight’s health, in the beginning, leaves a lot to be desired, and while it is easy to heal back, it leaves little room for mistakes in the heat of combat.

However, there are many mask shards scattered throughout Hallownest that The Knight can gather to increase their durability. Some of these mask shards are waiting in plain sight, while others are far more elusive. The good news is that they are plentiful, and many can be obtained early on.

Four mask shards can be bought from Sly’s shop in Dirtmouth after he opens up shop, each more expensive than the last. The first shard will cost 150 geo, the second 500 geo, the third 800 geo, and the fourth 1500 geo. The second two shards require the Shopkeeper’s Key to be returned to Sly, who will then expand his inventory. The key can be found just before the Crystal Guardian’s boss arena in Crystal Peak. 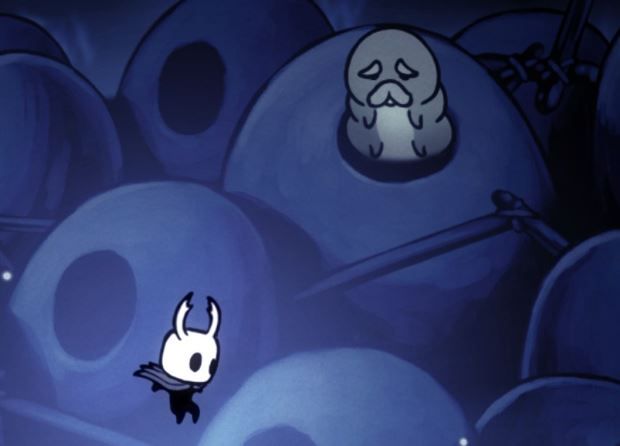 Grubs can be found trapped all throughout Hallownest, and there are forty-six in total. After freeing five of them, the Grubfather in the Forgotten Crossroads will give you a mask shard the next time you see him. 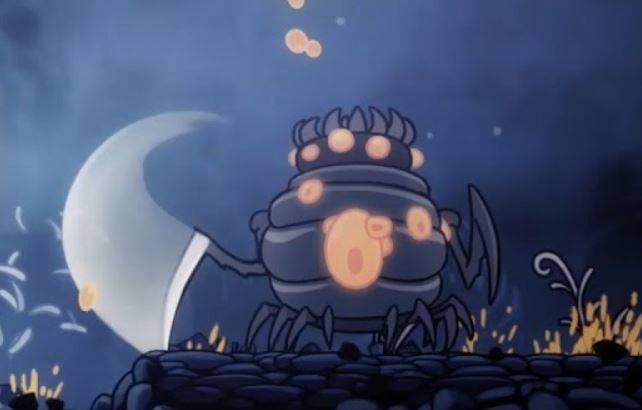 The quickest route to this shard is to start from the Forgotten Crossroads hot spring bench, and head left to the room where Cornifer sat. From there go upward into the room with the Gruzzer flies, and the path to the Brooding Mawlek will be found near the bottom left just above ground level. You can use the Mothwing Cloak to reach it or use your attack to bounce off of a Gruzzer that passes by. The Mantis Claw is highly recommended here, as it makes the platforming area before the boss much easier. After defeating the boss, the mask shard is yours.

Starting once again from the hot spring bench in the Forgotten Crossroads, leave the spring and then head to the lower right. There will be a hole in the ceiling a short distance into the next room, leading to the next mask shard. The Mantis Claw is recommended for reaching this area, but it is possible to reach it by bouncing off of the Vengefly in the room if you can lure it over the Goams without it dying. From there the mask shard will lie at the end of the path, with more Goams acting as hazards along the way.

From the Queen’s Station bench, head to the right into the next room. On the lower right edge of this room will be a short platforming challenge requiring the Mantis Claw and Mothwing cloak, with a mask shard waiting at the end.

From the Royal Waterways bench, climb directly upward using the Mantis Claw until you reach the first path to the left, then follow it. After dropping into the water you just need to keep going left. The mask shard will be across the water in the next room. 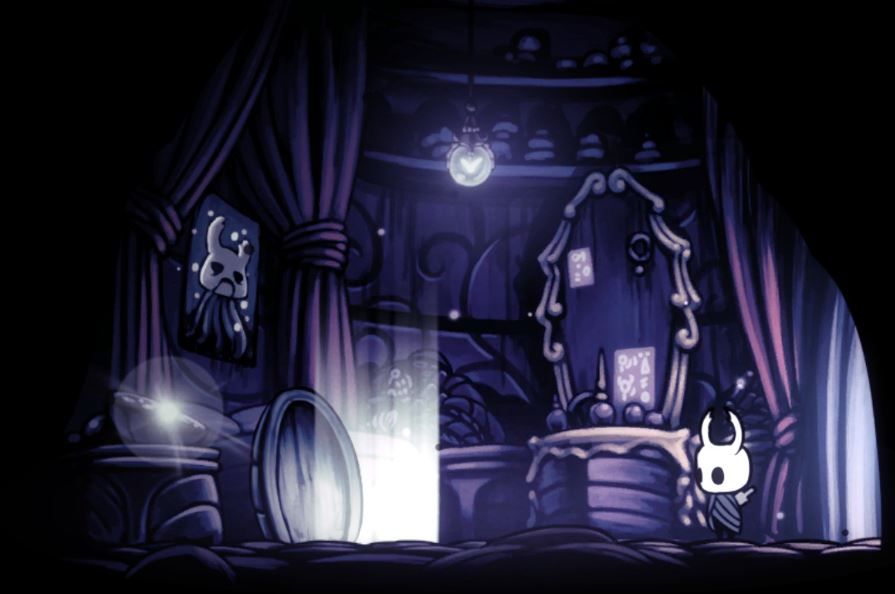 Another shard awaits inside Bretta’s house in Dirtmouth, but before you can access it you will have to save her. She can be found in the Fungal Wastes by starting at the lower right bench of the area and heading down to the Dashmaster statue, then continuing left from there. After a small platforming challenge requiring the Mantis Claw and Mothwing Cloak, Bretta can be spoken to and sent to Dirtmouth. The mask shard can then be found in her house. 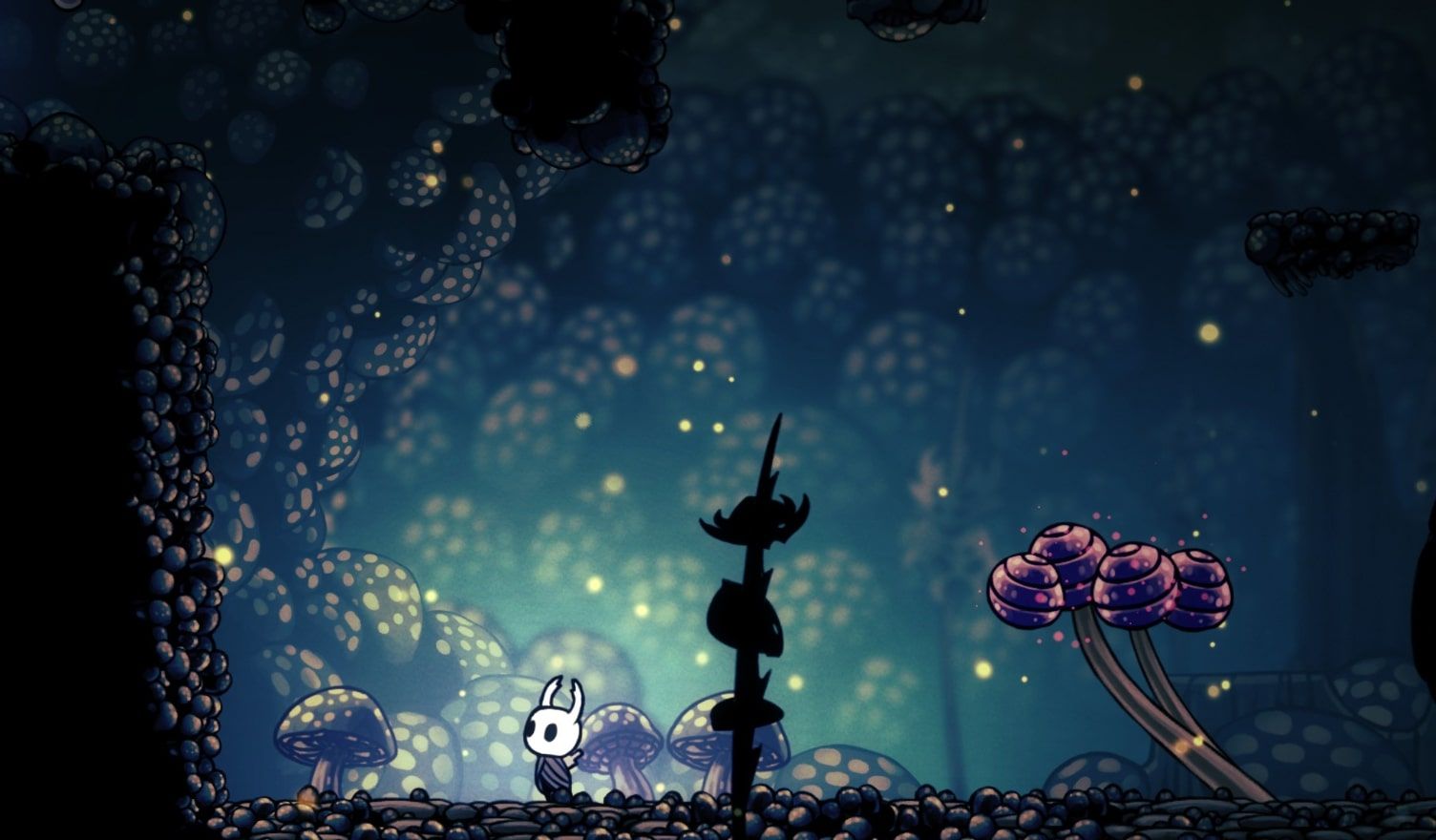 Starting at the lower right bench, follow the path upward until you reach the end of the Mantis’ territory, where a steep wall with a path at the top will be on the left side of the room. Use the Mantis Claw to climb the wall, and proceed into the next room. From here head immediately left along the top of the room to reach the Fungal Core. The Monarch Wings are required to jump up into the area and proceed forward. At the end of this area, there will be a pit leading to Deepnest, where the mask shard can immediately be found.

The Seer and the Dream Nail 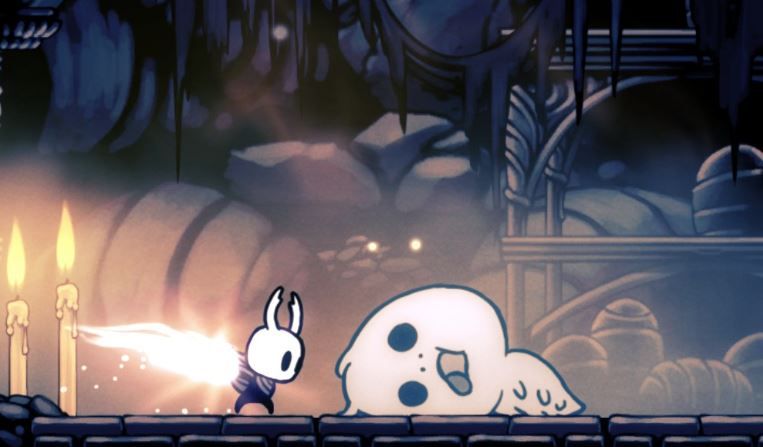 As you progress through the story you will find the Resting Grounds, and after some exploration in the small area, you will find the Seer. She will give you the Dream Nail, and task you with collecting dream essence for it. After collecting 1500 essence and talking to her again, you will be rewarded with a mask shard. Essence can be acquired through whispering roots, Warrior Dreams, and Dream Bosses found throughout Hallownest. Whispering roots can be struck by the Dream Nail to cause essence to appear throughout an area, allowing you to collect it by platforming. Warrior Dreams can be found all throughout Hallownest, serving as boss fights and rewarding large amounts of essence upon their defeat. Iselda in Dirtmouth sells a pin that will mark Warrior dreams you have found, allowing them to be found much easier. Finally, Dream Bosses are rematches against specific bosses that you have defeated that can be accessed by using the dream nail on their corpse. These fights are much more difficult than their original fight, but also award the most essence of the three options. The bosses that can be rematched in this way are the False Knight, Broken Vessel, Soul Master, and the Dung Defender. 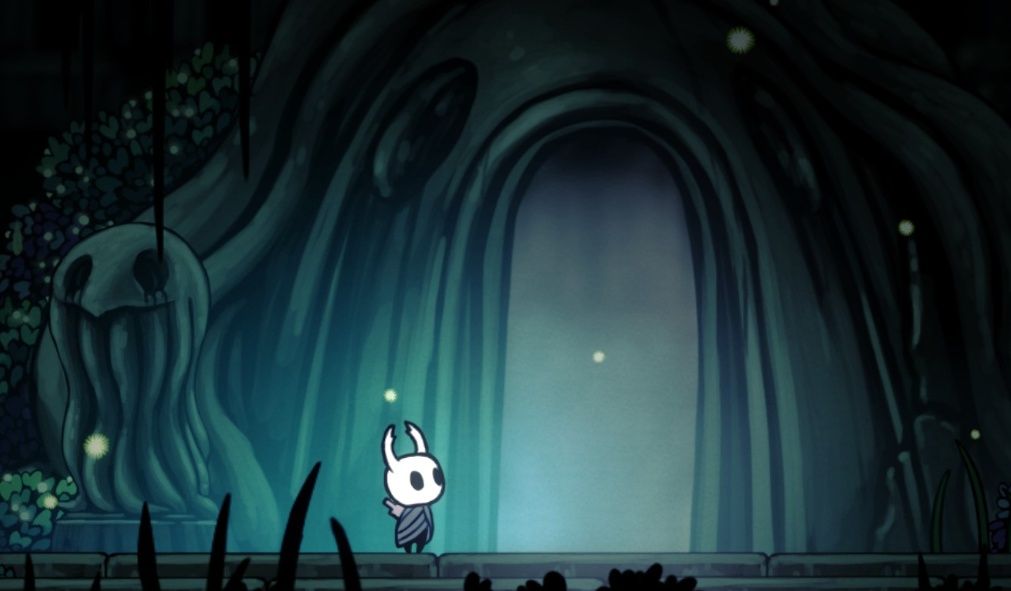 From the Queen’s Station bench, head to the top left and into Fog Canyon and go up through the next room until you reach Greenpath. Head to the top left exit of this room, and it will be a straight shot to the Stone Sanctuary. This area will be very dark without the Lumefly Lantern from Sly, so it is recommended to buy that first. There is also a dream warrior here who can be defeated for 200 Essence, contributing to the mask shard from the Seer.

Directly to the right of the Crystal Guardian’s boss room and the bench they were sitting on will be a hole in the ceiling. The Monarch Wings are required to reach this path. From there it is a straight shot to the Enraged Guardian, and after defeating them the mask shard will be in the next room. 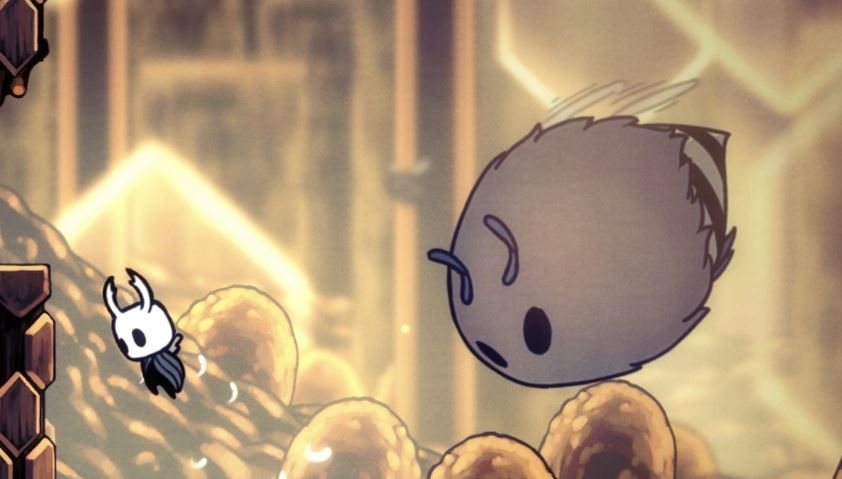 The Monarch Wings are required to enter the Hive, but are not needed for the shard itself. From the boss room at the end of the area, head left into the next room. There will immediately be a Hive Guardian below you. Lead the Hive Guardian to the left end of this room and there will be a crumbling wall. Bait the Hive Guardian into charging into the wall and it will break, letting you take the mask shard.

The final mask shard can be found in the resting grounds, and is the reward for one of the most infamous quests in the game. Starting from the Seer, a crumbling coffin can be found in the lower right end of the adjacent room. Desolate Dive or Descending Dark can be used to break the coffin, revealing a secret area below. At the upper right end of this area there will be a small building, housing the Grey Mourner. She will give you the simple task of delivering a flower to the grave of her late lover, which can be found in the Queen’s Gardens. The caveat however is that the flower will be destroyed if you take damage even once, as well as if the Stag Station or Dreamgate are used. 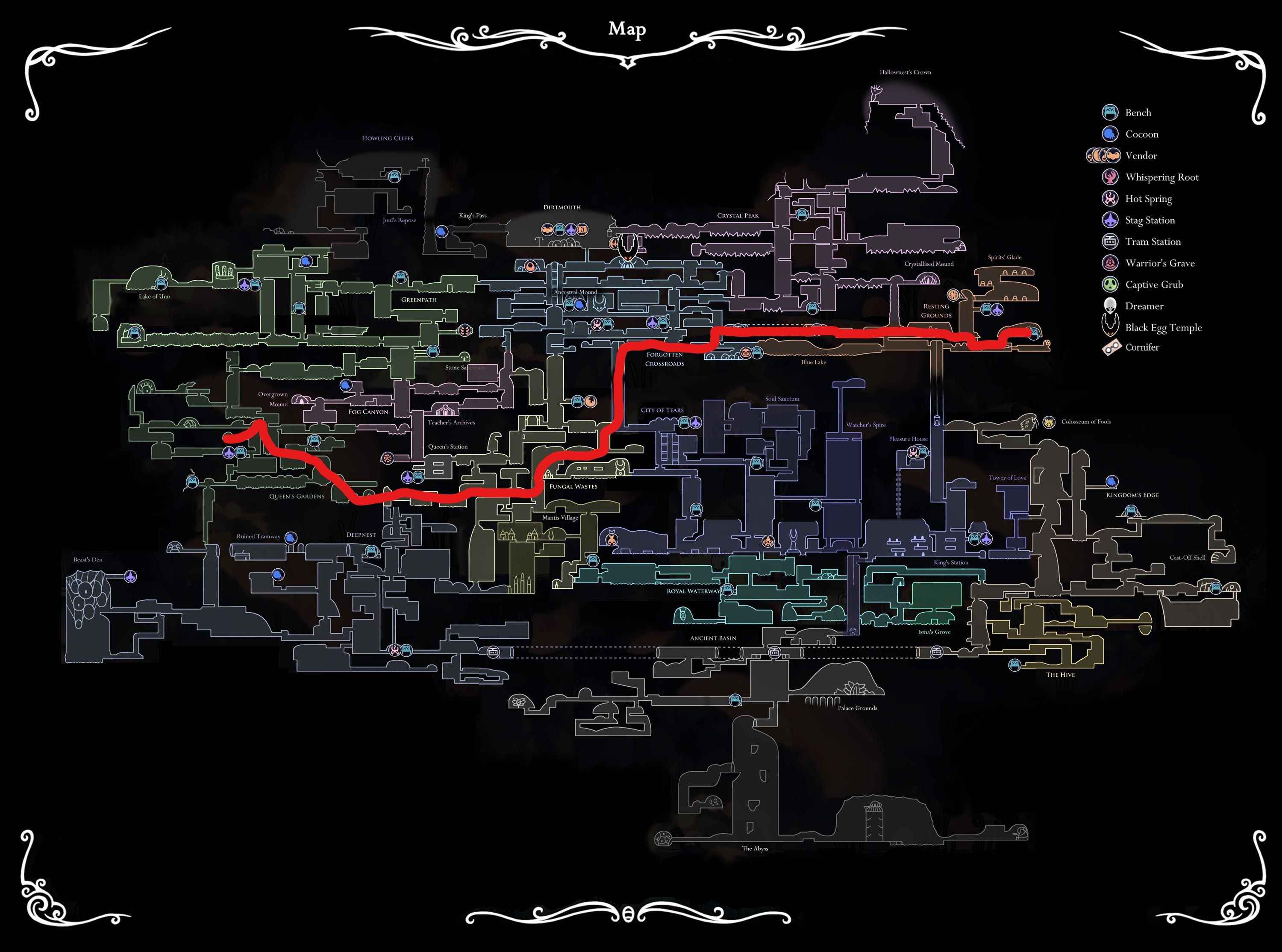 This is no easy feat, as it requires you to take no damage from one end of Hallownest all the way to the other without any form of fast travel. No route is truly safe, with each having its own flavor of threats along the way. However, one of the safer routes that can be taken is to go through the Forgotten Crossroads using the tram (this will not destroy the flower) and then head towards the elevator connecting to Fungal Wastes. Forgotten Crossroads at this point in the game is a dangerous place, but the route is intended to spend as little time there as possible. Fungal Wastes on the other hand is full of slower enemies that can be easily avoided. Proceed left through the Fungal Wastes to the secret entrance to the Queen’s Gardens. From there take the upper left path, and this will lead you almost directly to the grave. The route is filled with enemies and spikes, but a trick that you can do is to kill all of the enemies before retrieving the flower, as most will not respawn until you rest at a bench. There is a small platforming section just before the grave with spikes that can erase all of your progress thus far, but so long as you are careful with your jumps and dashes you will make it through. After returning to the Grey Mourner, you will be rewarded with the final mask shard.