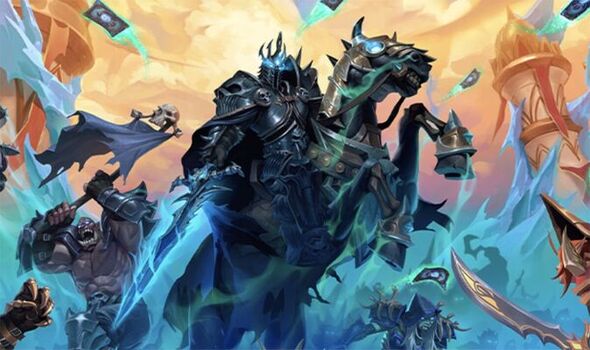 Hearthstone fans are counting down to the release of Blizzard’s next major DLC expansion. Hearthstone’s March of the Lich King DLC has a December 6 release date and a 6pm GMT UK launch time. The MotLK expansion launches alongside a brand new Death Knight character class, not to mention a whopping 145 new cards and even some brand new Minion types, including Undead and Dual-Type.

A permanent addition to the world of Hearthstone, the Death Knight is said to command the Undead with its Ghoul Charge hero power.

Described as a flexible class, the Death Knight is powered by Blood, Frost, and Unholy runes, which determine which cards he can play.

Blizzard explains more: “For two mana, summon a 1/1 Ghoul with Charge that dies at the end of your turn!

“That Ghoul does double-duty, because Death Knights gain a Corpse whenever a friendly minion dies. They can then spend those Corpses to power up their cards!”

As for the new Minions, the Undead are said to appear in Neutral and in the classes that have aligned with the Lich King. Dual-Type Minions, on the other hand, add a second to old and new minions.

“In March of the Lich King, some minions will have two minion types!” Blizzard explains.

“For Undead minions, this might be a second type to represent what they were before they became Undead. These will be retroactive additions, with both Undead and second minion types being added to many older minions as well as those in this expansion.”

If you want to pick up March of the Lich King, you can pick up two different Hearthstone bundles.

The standard bundle costs £44.99, and comes with 60 packs, 2 random Legendary cards from March of the Lich King, and the Lor’themar card back.