You are here:
Home / Hearthstone: Every Rogue Card From March Of The Lich King, Ranked

Hearthstone: Every Rogue Card From March Of The Lich King, Ranked

The March of the Lich King expansion for Hearthstone brought with it over 140 cards, as well as introduced new classes and mechanics to shake things up a bit. Each of the original classes received cards, as well, and if you’re a fan of the Rogue class in particular, you’re in for a treat.

Ten Rogue cards are added from the March of the Lich King, and all of them have a use within your deck, which may make it difficult to choose your favorite. When building your deck you’ll find some have undeniable advantages over others. 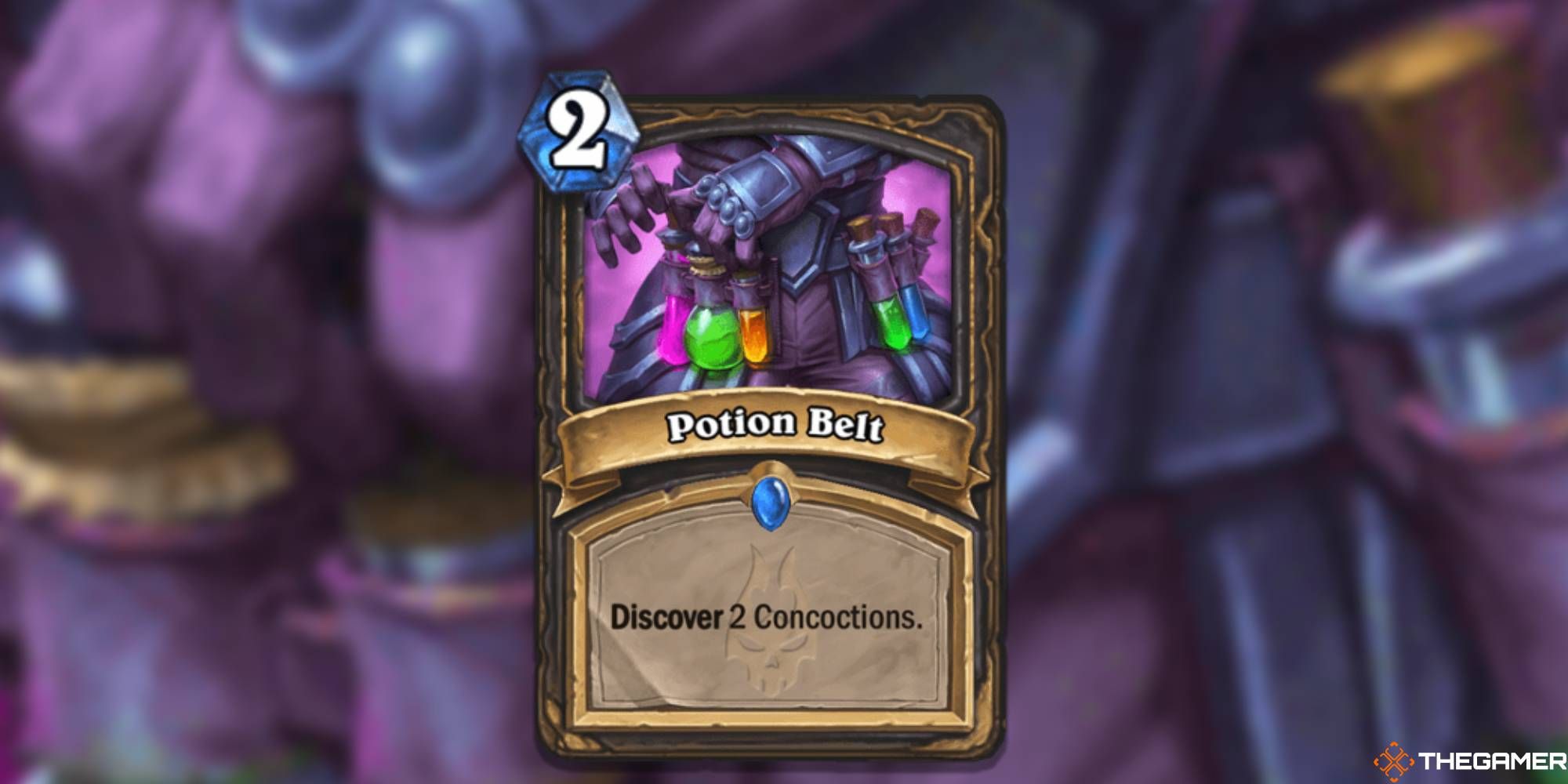 Potion Belt is a rare Spell that’s cheap to use and allows you to Discover two concoctions for your hand. Depending on what concoctions are in your deck, you may find this more useful than others, but overall, Potion Belt is a very basic Spell with limited application.

Still, anything that brings variety to your hand for potential play is a great card to have, especially early on when you have little mana to spare and might find yourself with nothing in hand to spend it on. 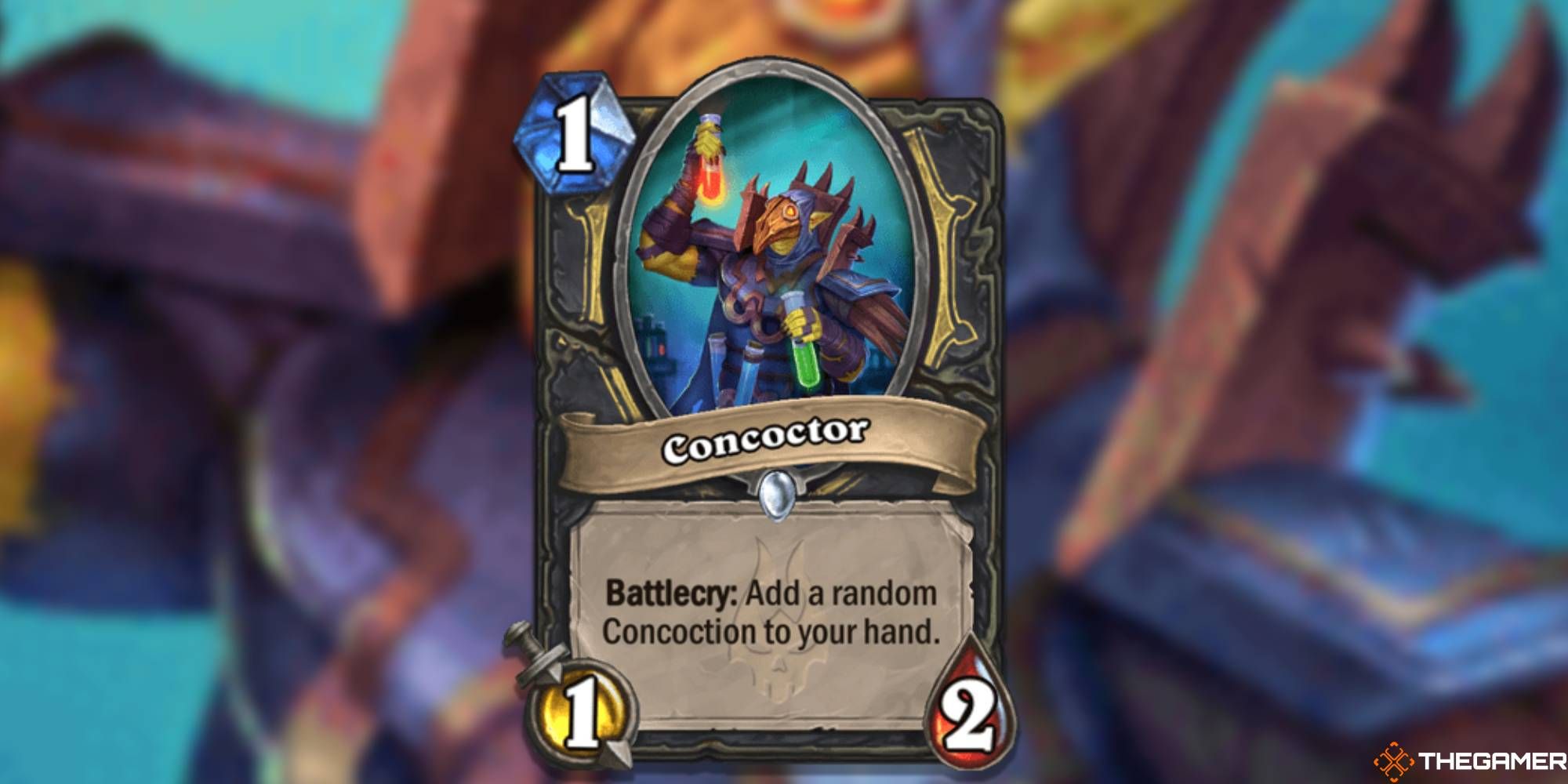 Concoctor is a very cheap common Minion that does offer some stats, though very minimal. If you do get to use it in battle, that’s obviously a plus, but this card is best relied on for its Battlecry.

When you first put Concoctor in play, it will draw a concoction into your hand. Like Potion Belt, this isn’t necessarily an amazing feat, and it certainly isn’t going to give you a massive advantage over your opponent, but it does add more to your hand to use against them, which is always a good thing. 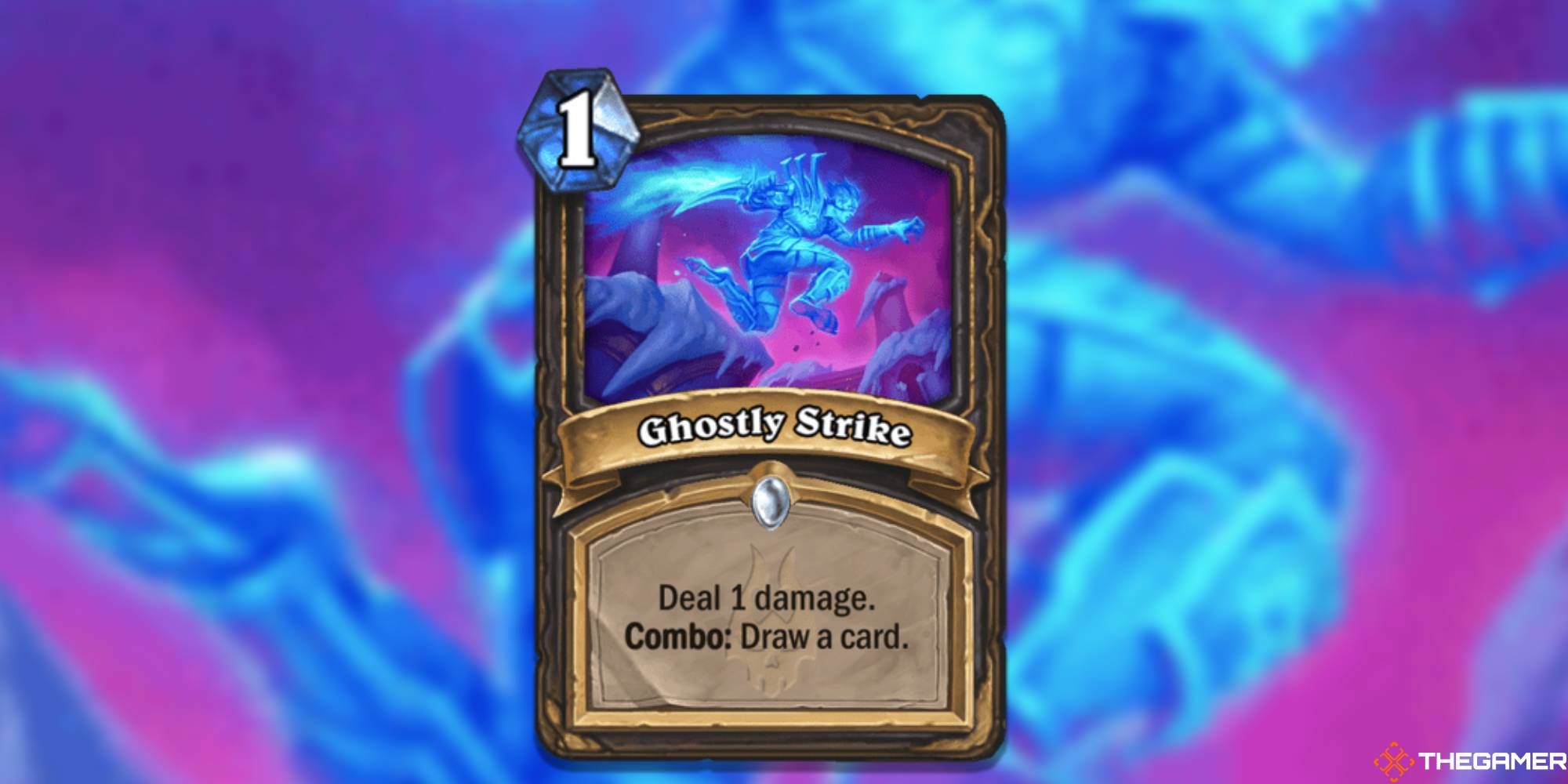 A common Spell, Ghostly Strike only costs one mana and will deal one damage to your opponent when you play it. If you’ve played a card before this in the same turn, you’ll get to draw a bonus card into your hand.

This Spell is a nice card to have in your deck because if you draw it in the first round or two, you can play it and still deal some damage, or if you draw it later, you get a bonus for having played it second or third in the round. Though it’s more of a filler card, it does offer versatility in your deck. 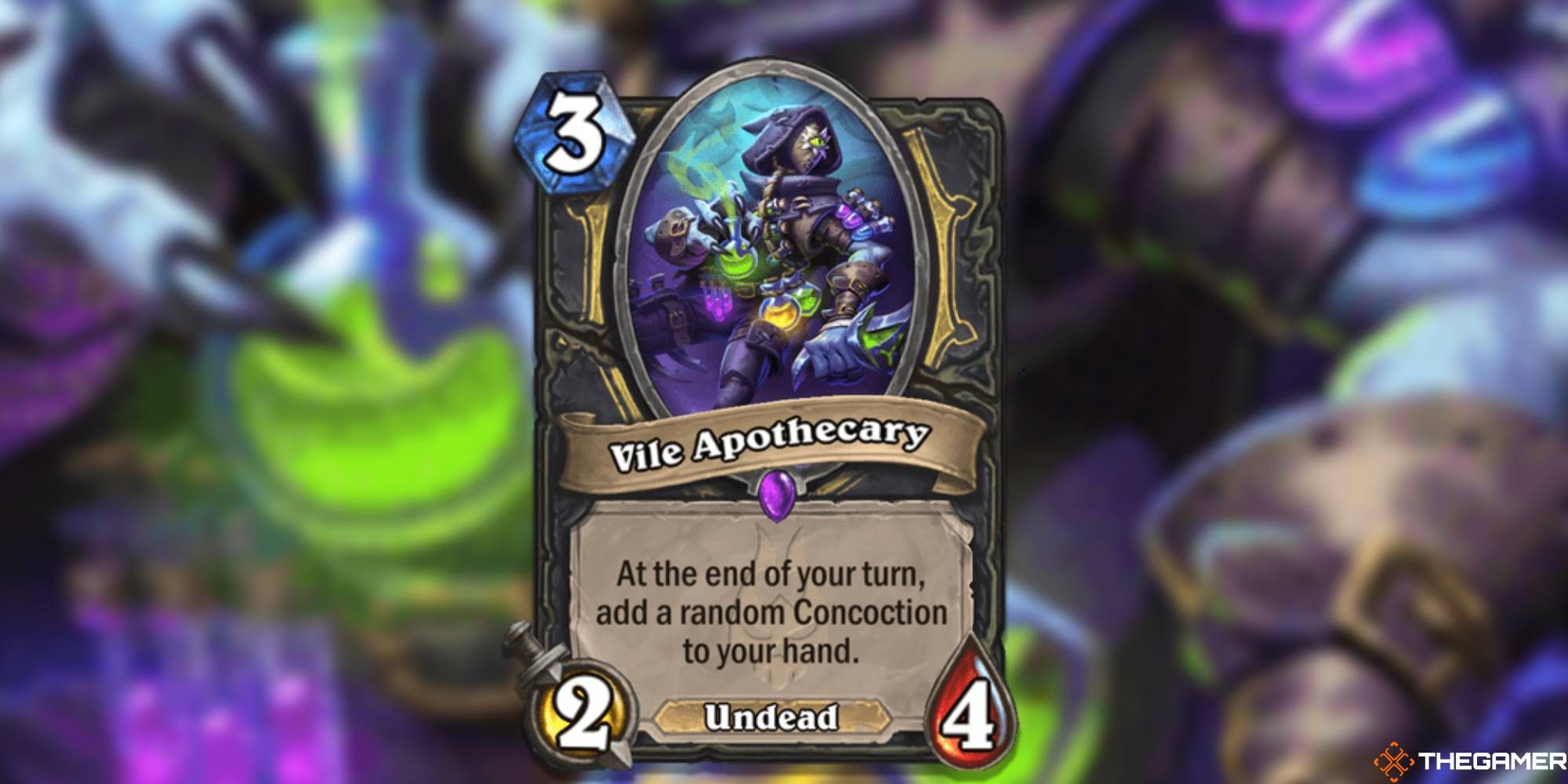 Vile Apothecary is an epic Minion with slight stats, but it’s only three mana to play, so it evens out. Like Potion Belt and Concoctor, this card will allow you to draw a random concoction into your hand, so if you have a concoction-heavy deck, Vile Apothecary is yet another card you’ll want to have in there, too.

There isn’t a strategy that needs to be formed with this, either, which makes it handy in multiple situations. Regardless of when it’s played, you’ll get the two Attack damage (if it attacks) and you’ll get the concoction at the end of the turn. 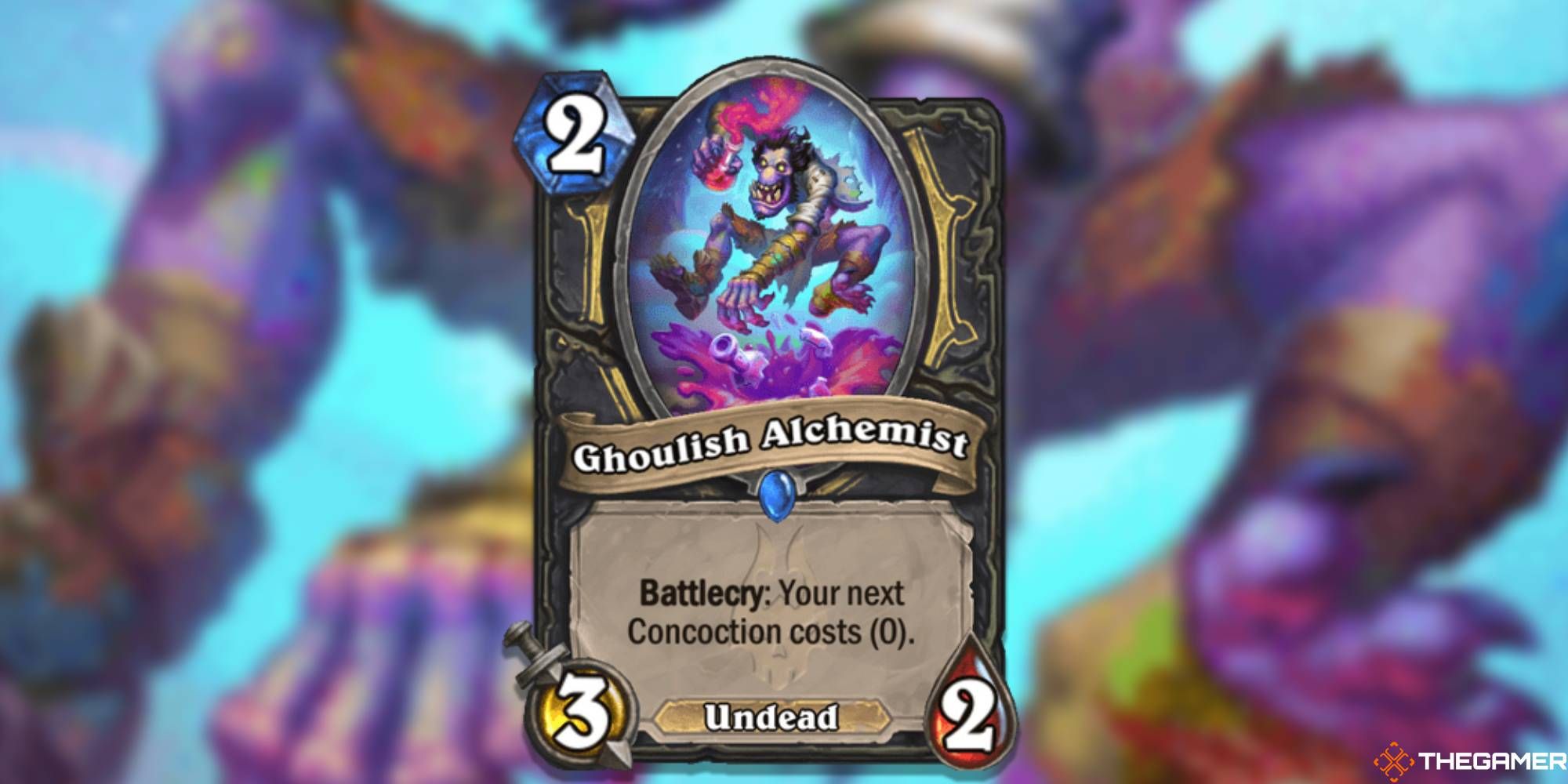 Ghoulish Alchemist is a rare Minion with a Battlecry that makes your next concoction free to use. Since this card costs two mana, this could potentially allow you to play this and a concoction within the earlier turns, or play multiple cards later when you have more mana.

No matter what turn you intend to use Ghoulish Alchemist, getting anything for free is amazing, especially when mana is tight. This card also has 3/2 stats, so it can do some damage while in play, too. 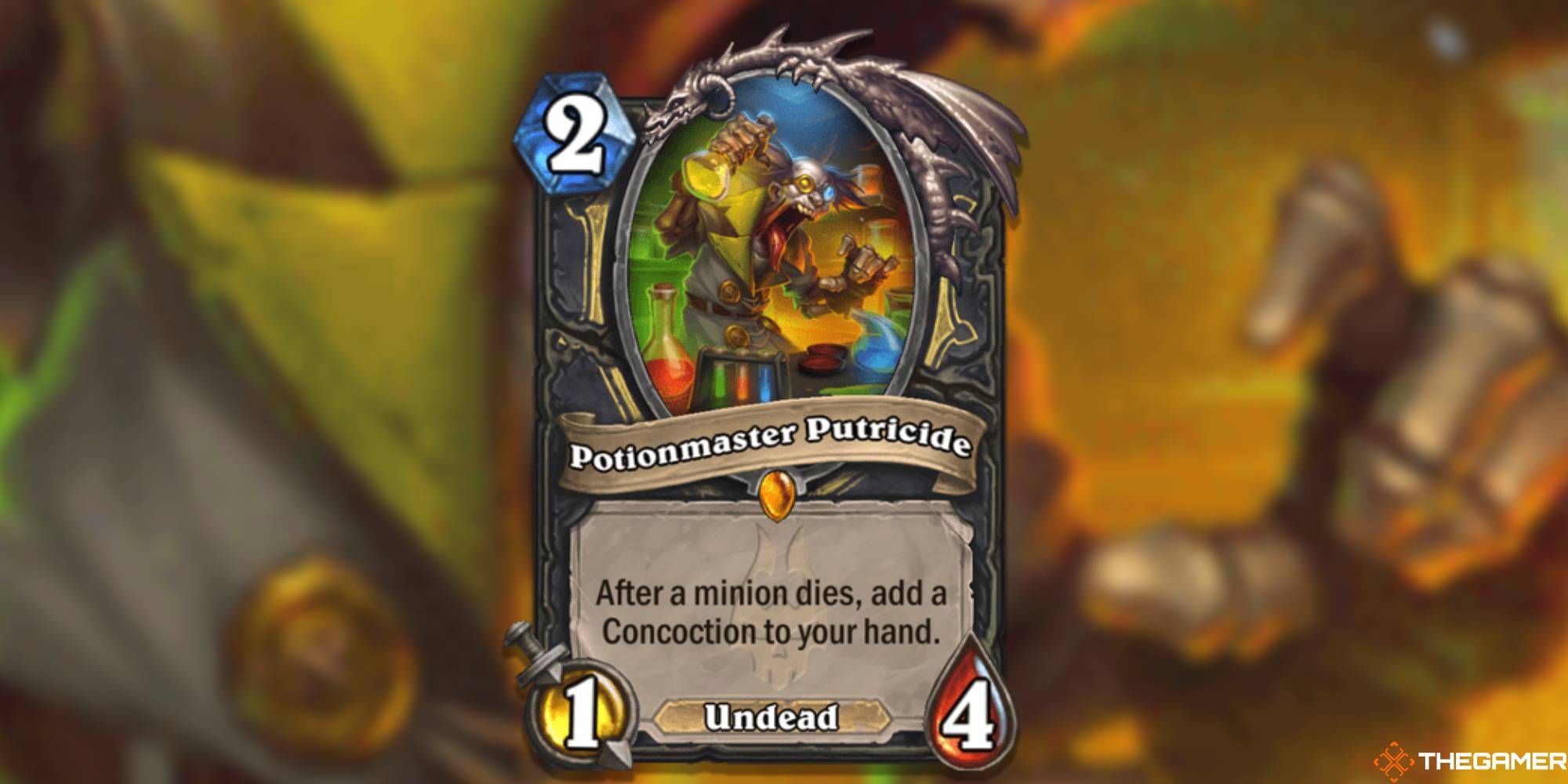 A legendary Minion, Potionmaster Putricide puts a concoction in your hand after a fellow Minion has died. Again, the more concoctions you have in your deck, the more you’re going to want this for your hand.

On its own, though, it has one Attack damage and four Health, and it’s a cheap card to use, so it does bring something to the table even if you don’t have the best concoctions in your deck or need to use it before you’d like to in the game. 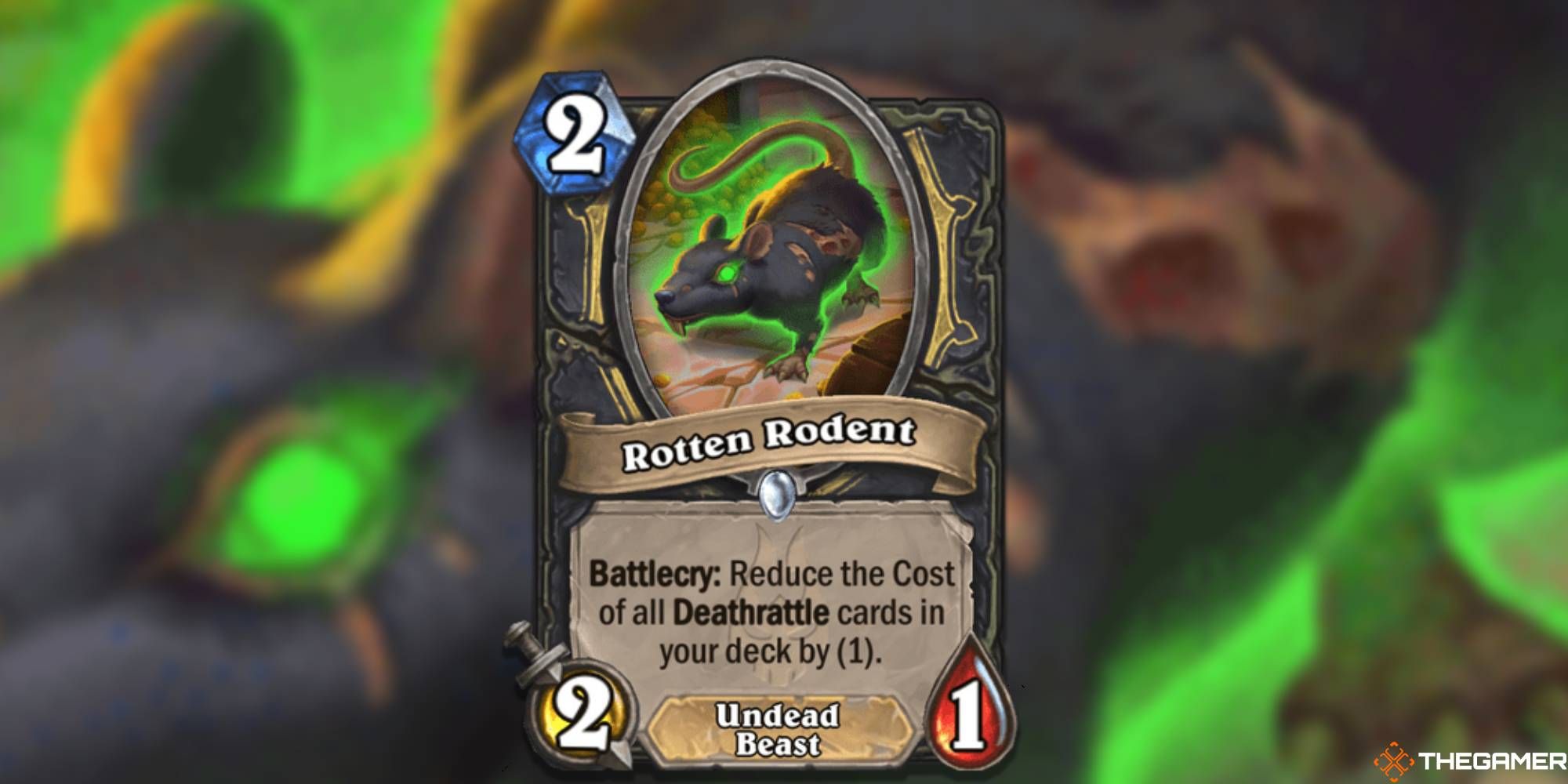 A common Minion with an interesting name, Rotten Rodent is only two mana to play and brings 2/4 stats to the battle. The Battlecry of the Rodent will make all Deathrattle cards in your hand cheaper by one mana.

This means you may want to wait until you have multiple Deathrattle cards in hand, or at least ones you’d like to use sooner rather than later to get the full benefits of having the Rotten Rodent. If time isn’t on your side, though, whatever you have in hand will still be cheaper as long as it has Deathrattle, and the Rodent will be able to inflict damage to your opponent while in play. 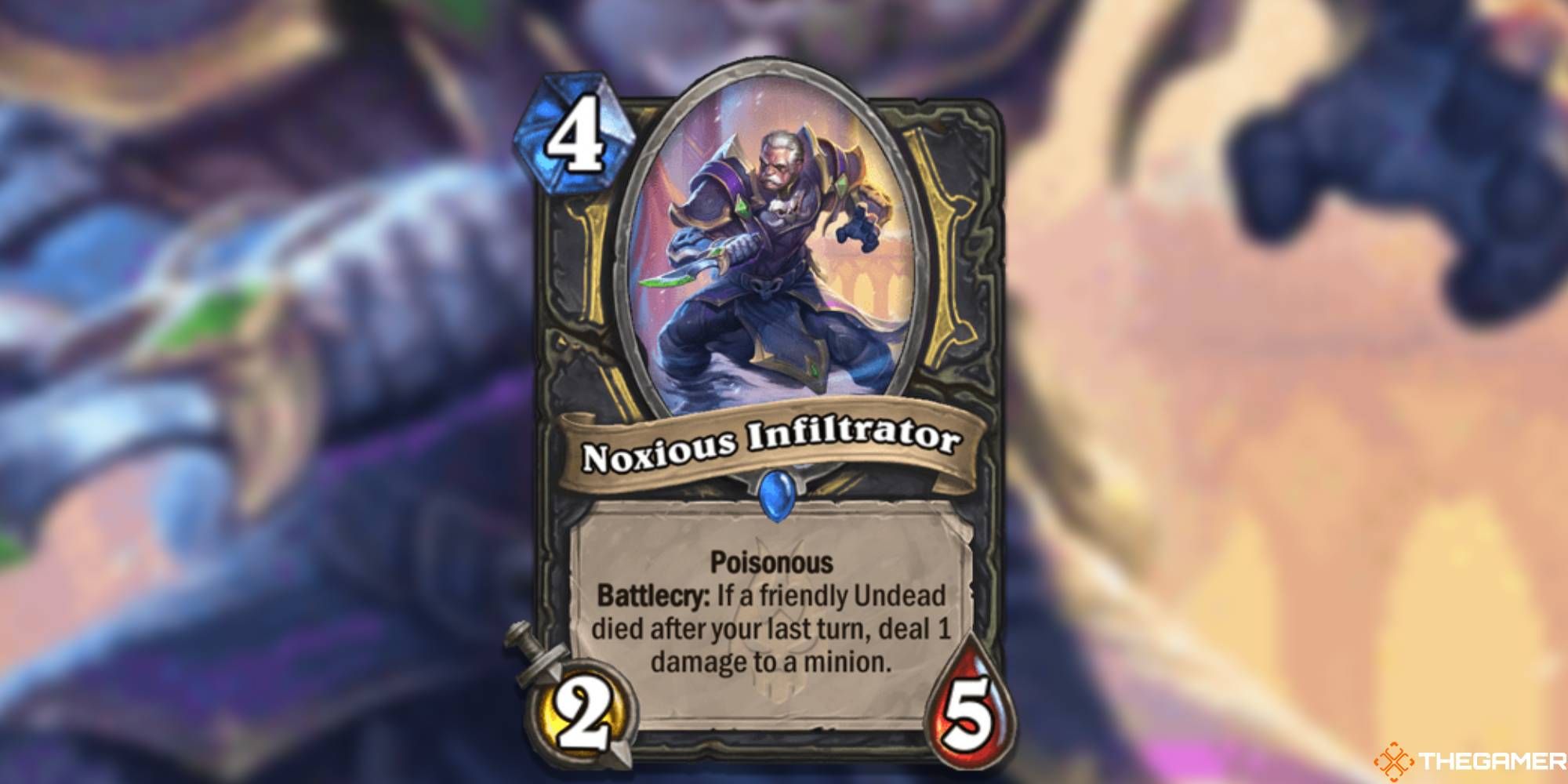 Noxious Infiltrator is a rare Minion that doesn’t have strong Attack stats, but is poisonous and will destroy any attacking Minion that manages to damage it. Its Battlecry will also hit a Minion with one damage if you had an Undead die in your previous turn.

All in all, Noxious Infiltrator is well worth the four mana cost since it will likely take out a couple of your opponent’s Minions before they successfully destroy it. 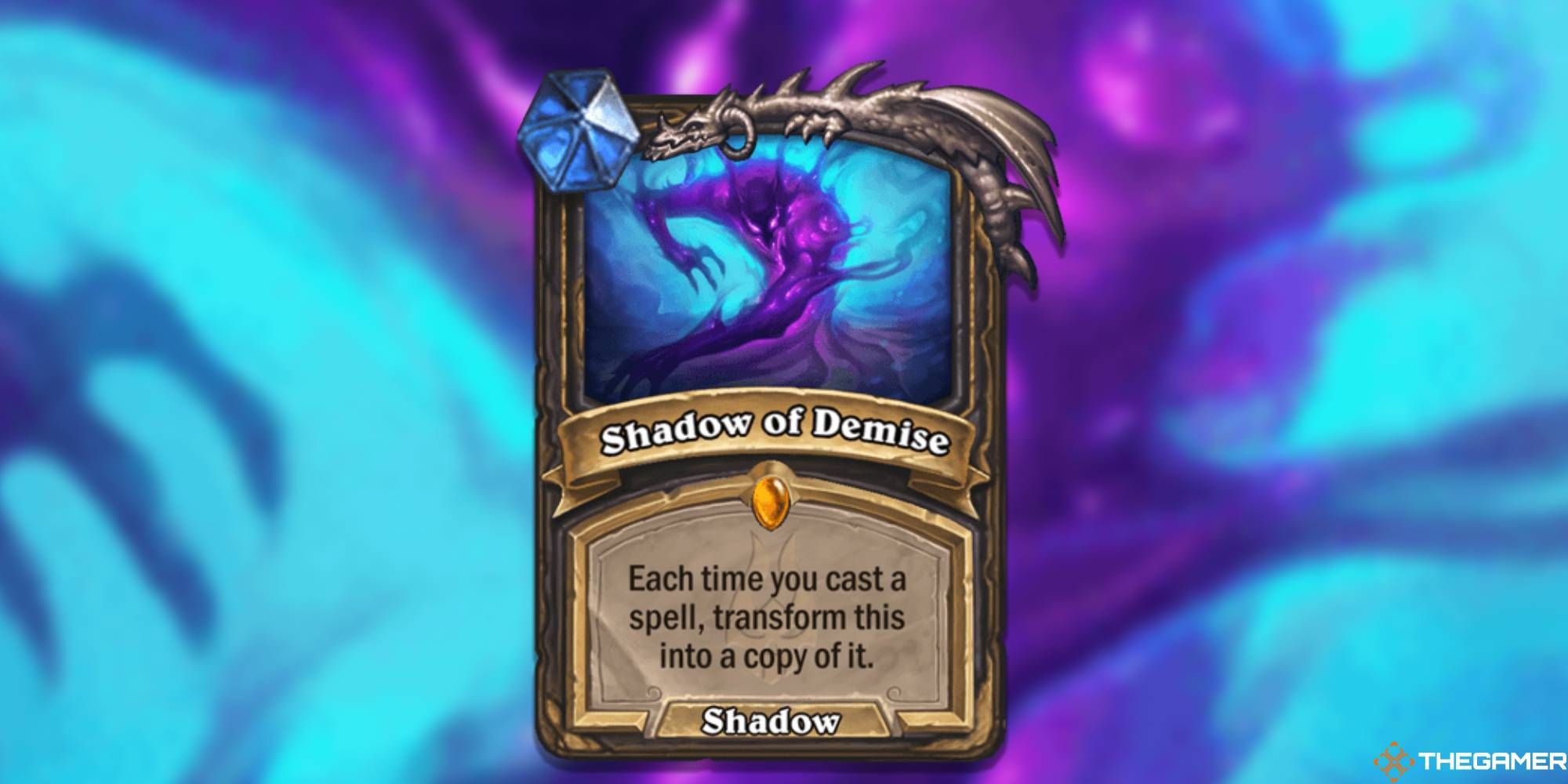 Shadow of Demise is a legendary Spell that doesn’t cost you any mana to use. If you have a lot of Spells in your deck, adding this one in there will be incredibly beneficial. Whenever you cast other Spells, Shadow of Demise will become a copy of those Spells as they’re played.

Although this card doesn’t offer you any Attack stats or damage, the ability to morph into other Spells to continue to use them can change the course of your whole game and gives you final control over its use. 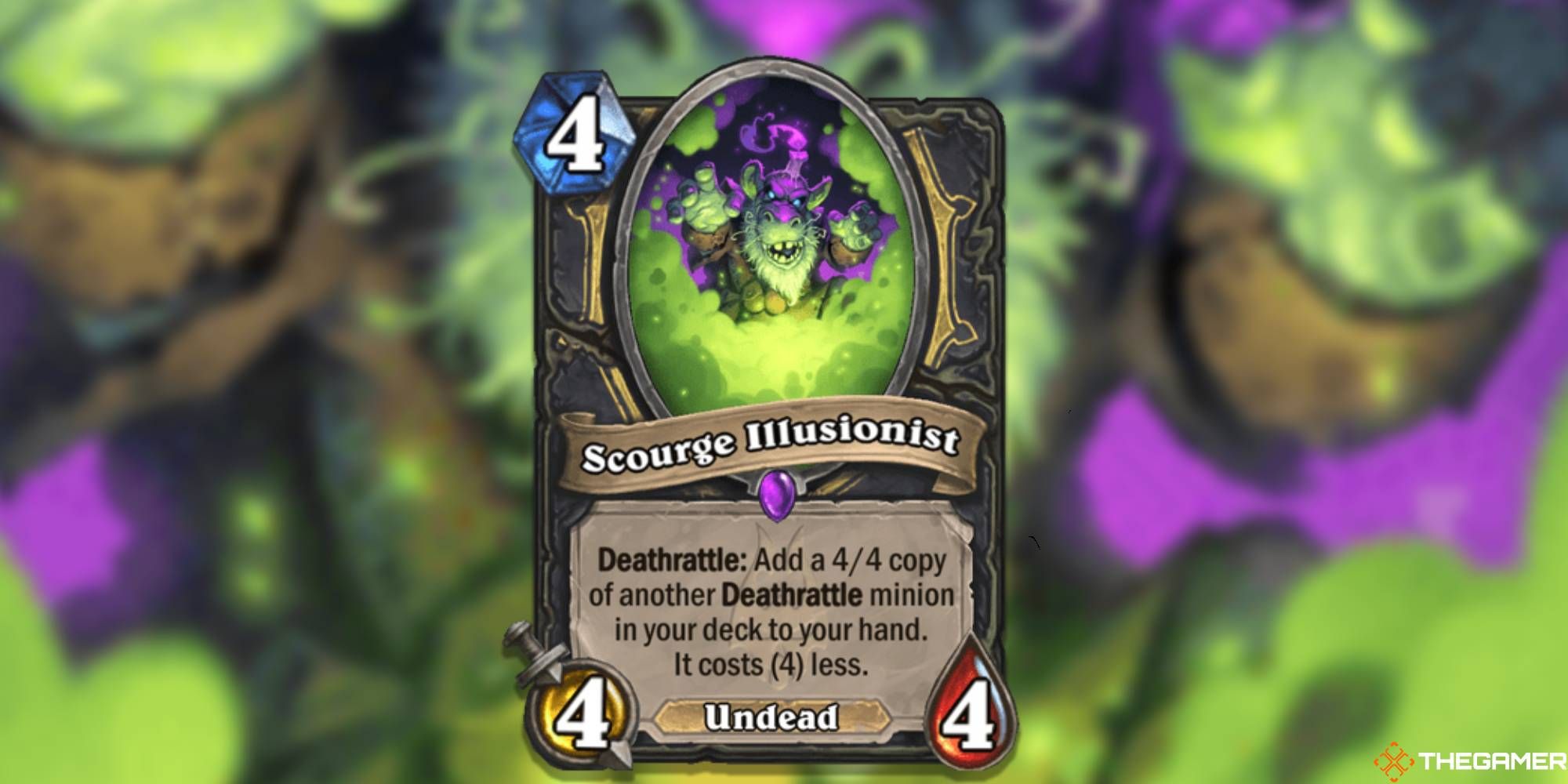 An epic Minion, Scourge Illusionist has decent stats for only four mana. This alone will make the illusionist valuable to play for the four Attack damage it can deal to your opponent’s Minions. However, when this card is destroyed it will trigger the Deathrattle.

Scourge Illusionist’s Deathrattle will place a copy of another Deathrattle Minion from your deck in your hand with 4/4 stats. When you go to use the copy, it will cost four less mana than the card it was copied from, potentially making it free to use, or just cheap for more expensive Minions.