You are here:
Home / Harvestella Review

Before I really dig into Harvestella, we need to talk about the big blurry Totokaku in the room. Its visuals can appear very out of focus quite a lot of the time. Whether my Nintendo Switch was handheld or docked, it was the same result. It’s a shame, as when the game looked crystal clear, you could see Harvestella has a charming, cute style and a detailed, intriguing world to explore. You get used to the blurriness after a while, but you shouldn’t have to. Maybe a patch or two will fix this, or you could just pick up the PC version.

Your next hurdle is the excruciatingly slow start. The opening is such a slog that by the time save points were introduced, I had given up all hope of them existing. Sure, I had seen the little spikey orbs floating around everywhere and thought, ‘gee, they look like they’d serve as save points’, but as I couldn’t interact with them for such a long time, I had assumed they were decorative, much like the other spikey Seaslight-like statues dotted everywhere. When it comes to first impressions, Harvestella is more than a little lacking.

As well as the off-putting graphics and a glacial introduction, Harvestella’s gameplay initially feels underwhelming as it struggles to find its feet. From the get-go, character creation is severely underwhelming. The option to have your avatar identify as non-binary is wonderfully inclusive, but otherwise, the creative options are severely limited compared to others in the genre. You’ll never truly be able to customise your character with clothing either. Attire changes based on your equipped job while in dungeons, but everywhere else, you’re stuck with your default outfit. Boring. 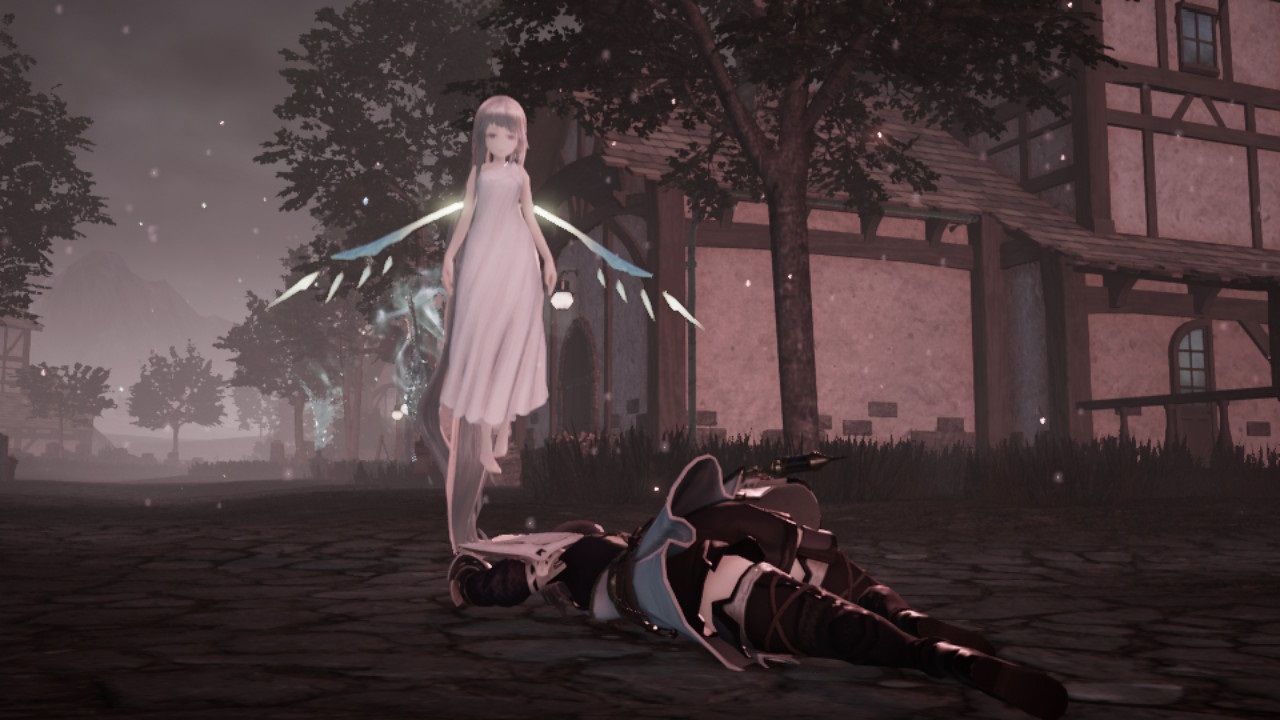 Likewise, you can’t jazz up your farm much. You can renovate things like the kitchen or animal enclosures, but they’re already there really. Nothing changes visually, as renovating simply allows you to use whatever it is you’ve just shelled out for. If you think that attic space means you can spruce up your home with various pieces of furniture or something, think again — this is where your trophies will appear instead.

Harvestella has the usual life sim mechanics, but they’re all pretty basic. Time passes each day, and most things you do will consume stamina, requiring you to spend your time (and stamina) wisely before hitting the hay, or risk paying an extortionate doctor’s fee for passing out. You can eat food to replenish your stamina, but ultimately, you’ll still fall victim to your character being incapable of staying up late.

When it comes to farm life, you can plant a range of seeds to make money, with different veggies and fruits only growing in certain seasons. You can upgrade your fields for a higher chance of high-quality crops, and later on, you’ll unlock a couple of extra biomes to plant specific seeds too. It’s all pretty standard stuff without the, “hey, your grandpa left you a farm before he croaked it and you need to uproot the evils of capitalism” storyline. 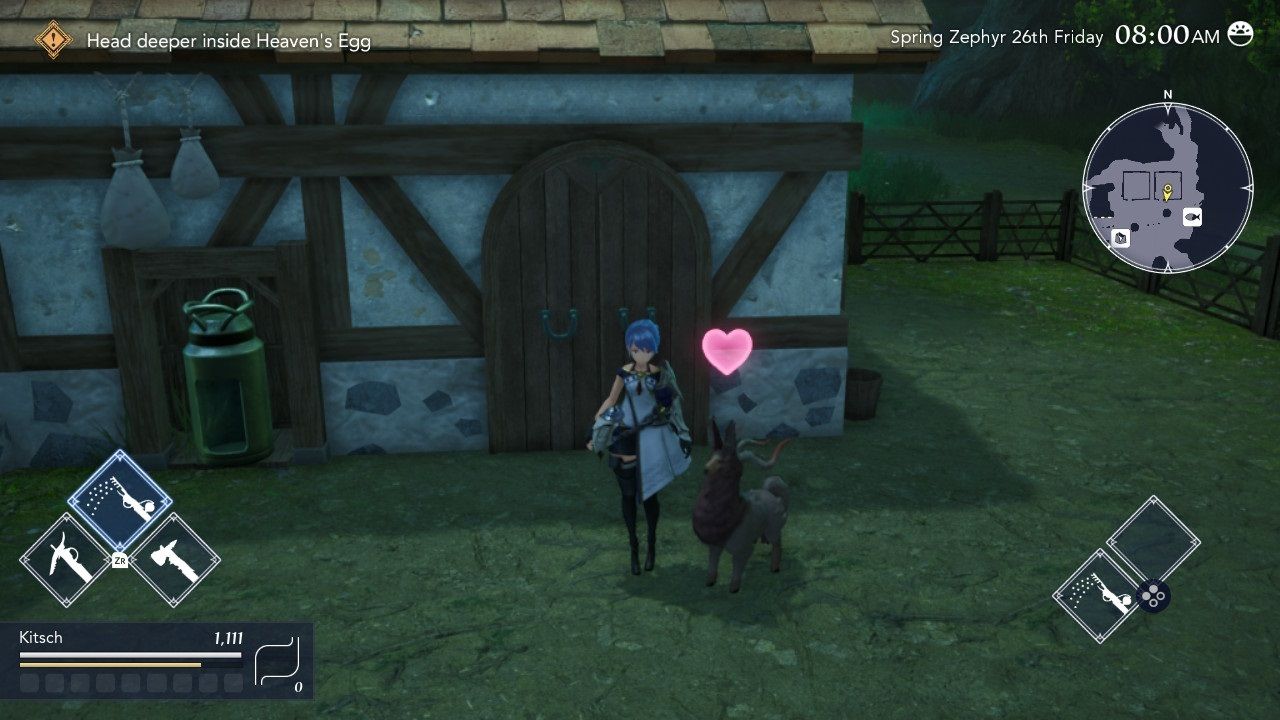 You’ll meet the four Great Fairies as your progress who will join the homestead, adding special fairy requests for you to complete. These unlock various rewards, including powered-up versions of your tools to make farming a little less tiresome. You can purchase the rod to begin fishing (an easy money maker) and craft tools and cook meals once you renovate the kitchen. When you unlock the Conellu vendor in town, you can only buy pasture animals, but there are only two different types. This vendor also sells a mount, though the barely noticeable speed increase in the overworld was not worth the 4,000 grilla.

Harvestella’s RPG elements feel more polished than its attempts at being a life sim. I enjoyed the action combat that encourages you to fully utilise crafting an effective party and switching between jobs on the fly to target enemy weaknesses. In dungeons, you’ll also come across interactive spots with a ‘choose your own adventure’ feel to them that provide situations where your character chooses whether to interact with whatever they’ve found. This results in a seemingly random event that can have a negative or positive effect. It’s a nice little touch that added a greater sense of exploration.

Ladders and bridges can also be repaired to create handy shortcuts. You can blow up walls with bombs to uncover extra areas or hidden treasure. Such events require items and will cause time to pass, so you have to weigh up whether it’s worth taking a sizable slice out of your day. This makes areas a little less mundane as you have to strategise your time and efforts a little more. 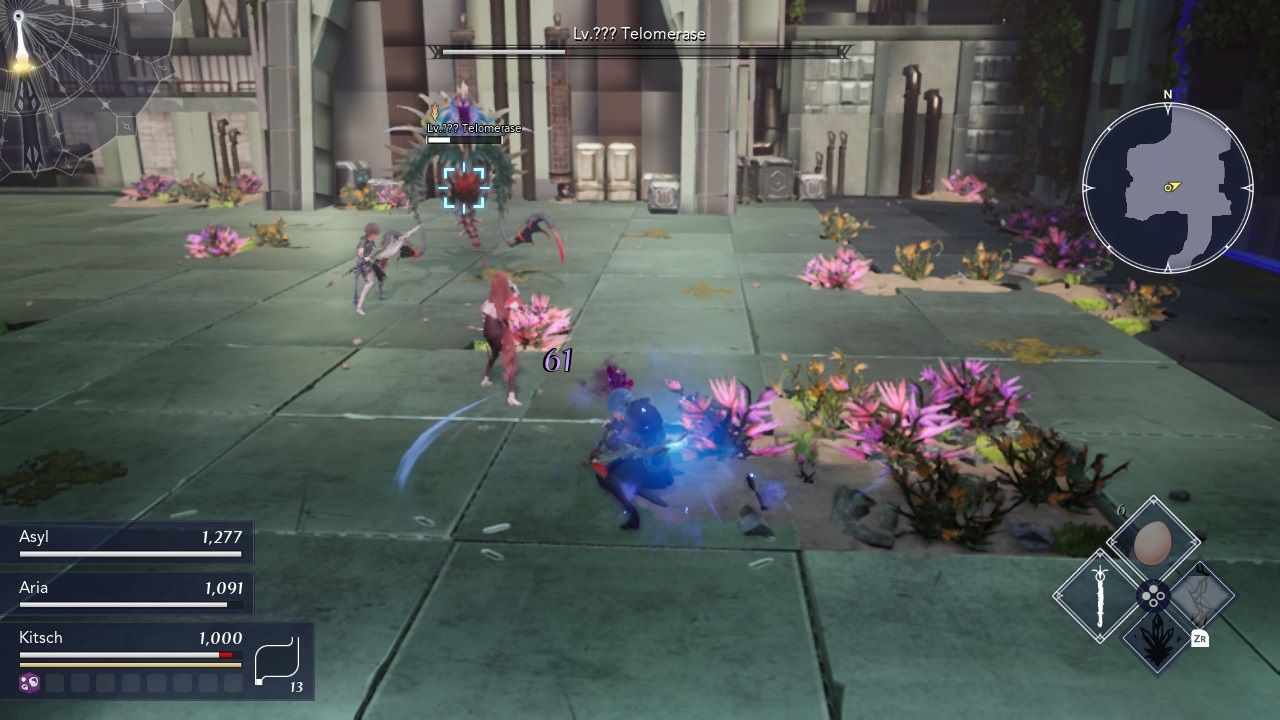 Harvestella becomes more enjoyable when you get to the Heaven’s Egg dungeon. You’ve finally got a few jobs to switch between and play around with, more party members to pick and choose from, and you have to start using your brain a little more. From this point onwards, each dungeon employs different environmental mechanics you must solve and overcome to progress. This might involve utilising wind mechanics to travel across platforms or using a weather switch to make things freeze over. Dungeon bosses also have their fair share of mechanics, making each one memorably unique as they’re not just a simple tank and spank situation.

For those who love RPGs that like to make you sweat, Harvestella certainly achieves that, as each boss is a level check. You need to ensure your chosen jobs are leveled well with relevant skills unlocked, that you’ve upgraded your party’s weapons, and you’ll need to have the right companions going into battle with you.

The bland protagonist is a bit of a sad sack, though. I understand games make these blank canvas characters so you can shape them into your own, but the lack of customisation means you never quite achieve that sense of self. One of the options is to pick a voice for your character, but you hear this so rarely that it could have been skipped entirely. Sporadic sound bites on the farm and in dungeons were so sparse that they felt out of place whenever they occurred. Half the time, I didn’t know who was speaking. Is that me? Or a companion? Is that me or a fairy shouting ‘BAM!’ every time I till the soil as if channeling their inner Alexis Mateo? 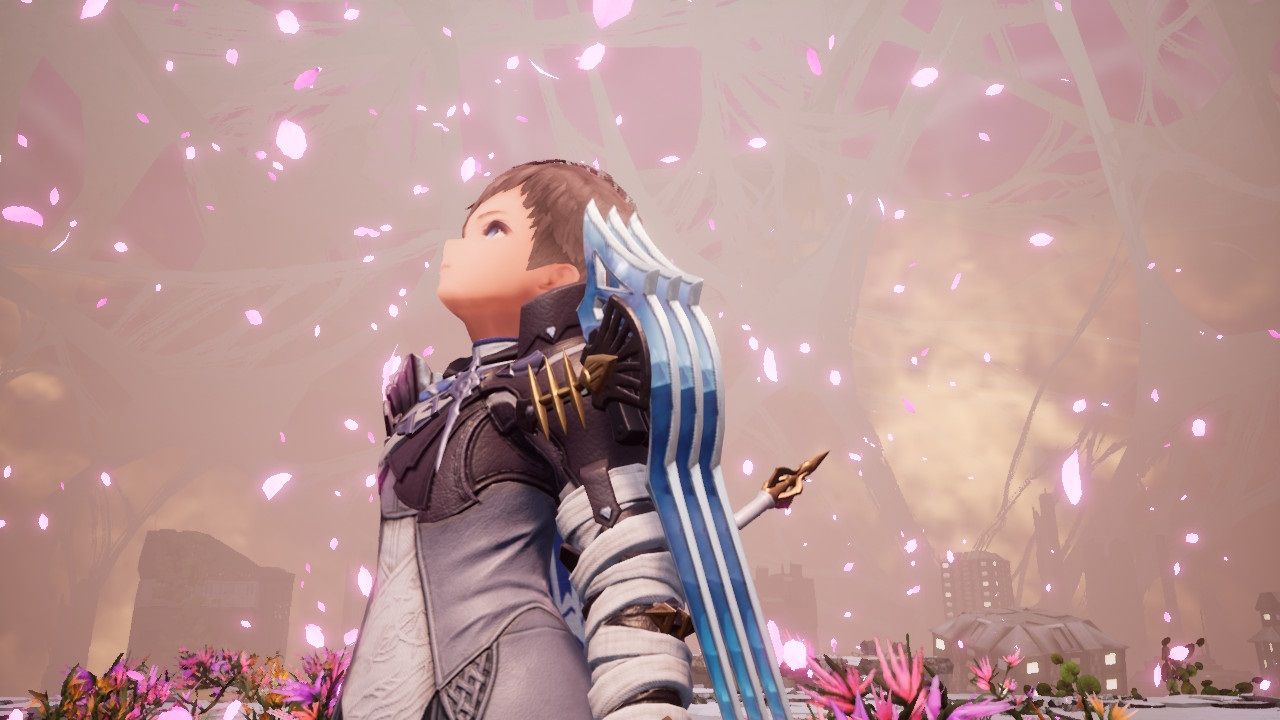 I won’t ruin the story, but the plot improves with time. It all seems like your typical RPG fodder at first – not bad, but not great – and you’ll probably think you have it all figured out. But then the game does a feint. You feel you’ve reached the end, and you’re up against the main antagonist, only to be thrown a curveball in the form of another five chapters. You’ll easily rack up over 60 hours completing the main campaign, and you’ll add plenty more if you delve into the optional content.

Harvestella’s side content is where it’s at. There’s a wealth of side quests, with the most notable belonging to your companions, where you can learn more about their backstories. Completing quests for each companion will improve your intimacy with them, unlock rewards such as party buffs, and can ultimately lead to a romantic partnership where they move into your farmhouse. Regrettably, you can only shack up with your fave once you’ve completed the main storyline.

Harvestella stumbles before it finds a decent pace, with the biggest drawbacks being the slow start and temperamental graphics. If you can get past these shortcomings, there’s plenty to be enjoyed here and a hefty completion time to keep you busy. While it offers an enjoyable blend of RPG meets life sim, there isn’t enough substance on either side to take the game from good to great.

Score 3.5/5. A Nintendo Switch review code was provided by the publisher.