Hard West 2 begins with the quintessential Wild West-style heist: hijacking a moving steam train while on horseback, set in winding dirt roads amidst sprawling mountain ranges. Your posse of outlaws look for opportunities to leap onto the locomotive, guns and fists at the ready. Within minutes, gun-toting cowboys swarm into the carriage, unloading clips of bullets against your incursion while crouched behind the safety of barrels, crates and walls. But with a few well-placed gunshots and strategic manoeuvring, the guards were downed and the outlaws emerged victorious. It was sublime; the battle soon became an irresistible and exhilarating display of smooth gunslinging and dizzying shoot-outs.

Like its predecessor, Hard West 2 is all about tactical combat and turn-based gunfights in the vein of XCOM, but not nearly as bleak, without the disposable soldiers, and imbued with a touch of the occult. As Gin Carter, you’re the leader of this merry band of outlaws who has somehow crossed paths with the literal devil—turns out the train that they were hijacking happened to be driven by this charismatic fellow, who decided to make them an offer they cannot really refuse. The outlaws, of course, got the short end of the stick, which makes up the impetus for the rest of their gunslinging journey: to point a double-barrelled shotgun right in the face of the smug devil. Trading the dusty, sweltering heat of the desert for the piercing cold air of the mountains, Hard West 2 would see this crew traverse through the snow, visiting various towns, mining tunnels and other locations—at least in the game’s beta for now—with their travels interspersed by gunfights and hostile encounters with cowboys and otherworldly beings.

This formula isn’t exactly novel, but the core of Hard West 2 is undoubtedly the tactical battles, with combat taking place via a turn-based structure. There are some basic, yet familiar rules to follow in these battles: every outlaw will be given three action points each turn, which is spent every time an action is carried out, be it moving across the map, taking cover or shooting enemies. That said, each action can take up more than one point, so if you decide to make huge strides across the map, you may very easily end up using up all the points in one single move. 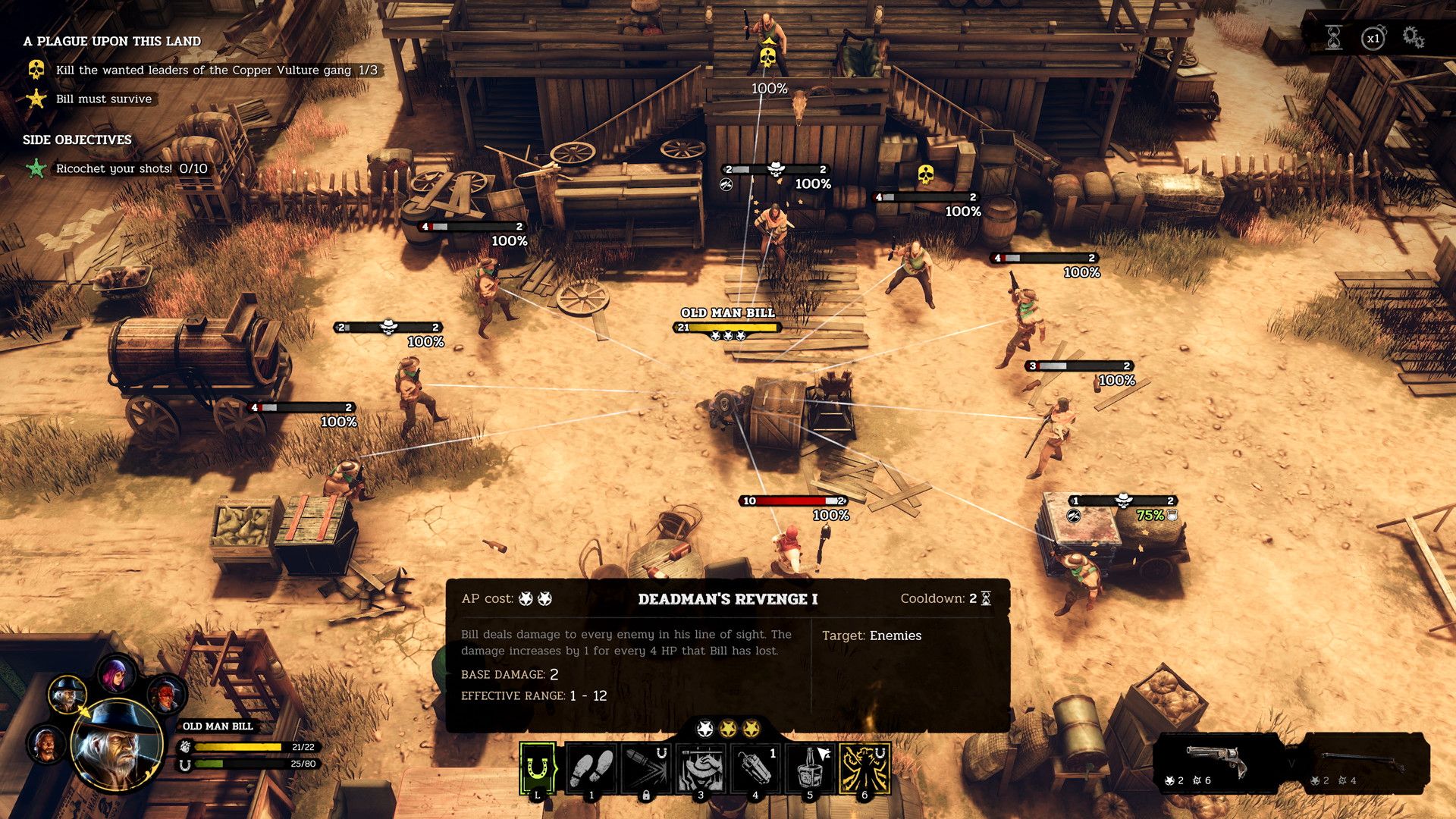 Then there’s the shootouts, with the chance of your attacks hitting an enemy reduced if they’re taking cover or are simply too far from your line of sight. One of the most obvious ways of increasing this percentage is to get physically closer to them—making headway towards your enemies without getting hit is the essence of combat here, after all—but you can also make use of the ricochet skill, which can allow outlaws to aim their bullets at a nearby obstacle, allowing these bullets to rebound off the surface to reach the noggins of your enemy. That said, Hard West 2 revels in risk-taking, which makes combat much more adrenaline-soaked; successfully killing an enemy will completely replenish your action points, which opens up more avenues for your gunplay, and lets you feel like a bona-fide gunslinging badass when you achieve a seamless streak of kills. Character-specific abilities, too, can be used to turn the tide of combat; for instance, Gin has an ability that lets him shoot at his foes while ignoring enemy cover, while another outlaw, Flynn, can trade places with an enemy at the cost of a slither of her health. Once your turn is completed, your enemies will then take their turn, moving and taking their shots against your crew.

This setup isn’t particularly complicated, even if it can be quite a bit to digest initially, but Hard West 2 gives you the freedom to strategise and finish these shoot-outs your own way. That said, there are some overarching combat goals that the game will assign to you, like ensuring that all your outlaws remain alive by the end of the battle, or killing the surrounding enemies in just one turn. This has the potential to add another layer of challenge and finesse to your gunfight—you are, after all, supposed to be a legendary and much-feared gunman with extraordinary skills. There are other little flourishes too; there’s an inventory system that lets you equip different guns and trinkets that can boost your combat prowess, and poker cards can boost your stats and even unlock skills. 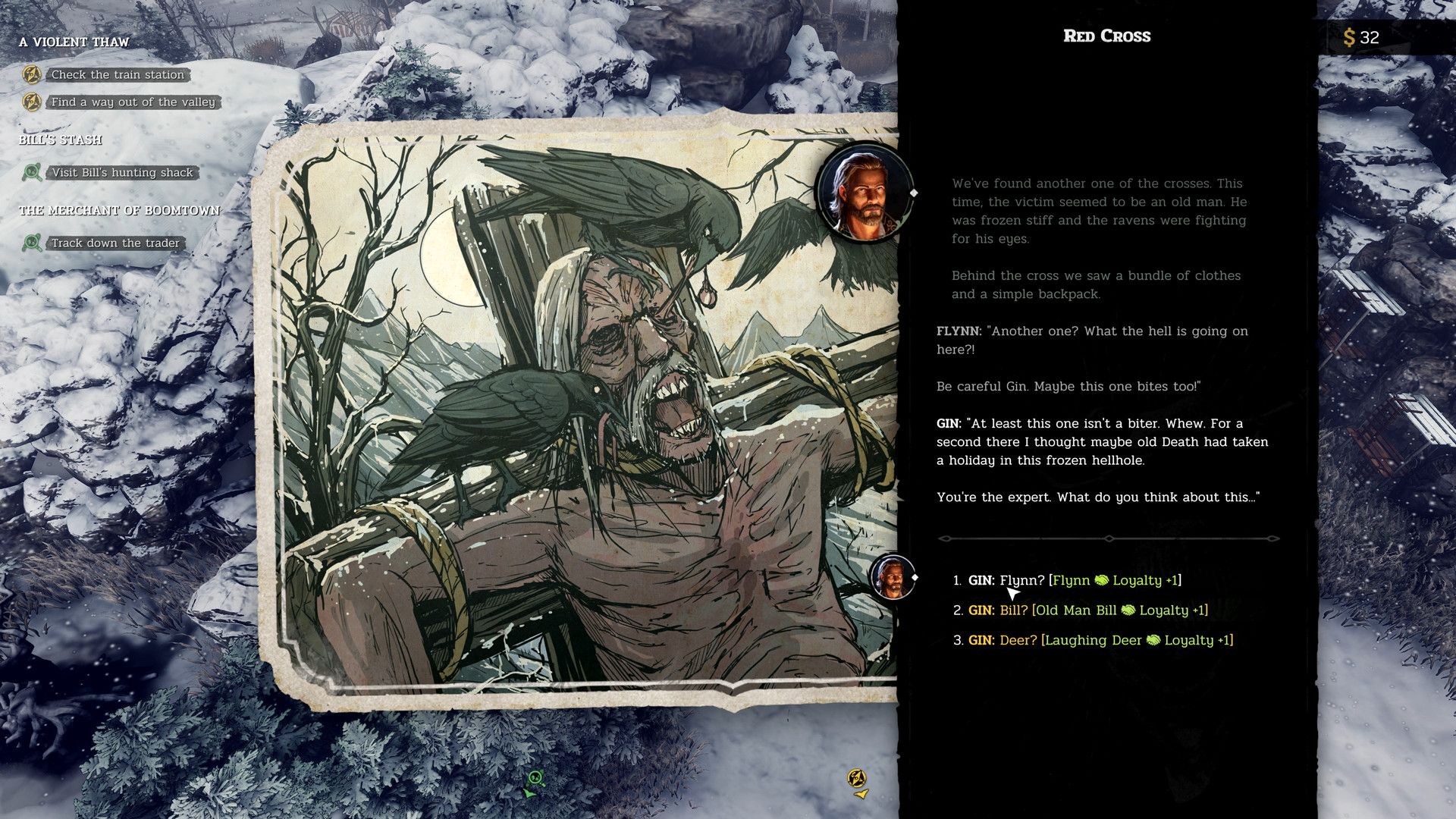 Outside of combat, Hard West 2 borrows liberally from RPG conventions, with a story and dialogue options that can open up different ways of resolving quests, earn you more equipment, as well as shape Gin’s personality as a ruthless gunslinger or an anti-hero with personal code of conduct. In particular, Hard West 2 seems to be inspired by Bioware’s companion loyalty system, in which you can choose certain conversation options that will let you earn the trust of individual members of your crew. These are mere shades of Bioware’s loyalty system, at least in the Hard West 2 beta—these aren’t deeply moralistic choices, and is just a matter of whose side you would take in a petty argument—but it looks like it can unlock other character-specific quests or combat abilities in future chapters. While it’s interesting that the Hard West 2 can be more than just a tactical combat game dressed in the Wild West aesthetics, these RPG elements don’t seem all that fully fleshed out yet.

I would like to think that there’s more to Hard West 2 than I experienced in its beta, but as of now the highlight of this title still lies in its tactical battles; the RPG elements are pretty much just trimmings to its combat. Instead, Hard West 2 is at its most invigorating when it sticks to its guns—letting you plan your moves, making risky gambles, and disposing of several gunslingers at one go with a smoking rifle. When it lets you unleash hell with the refined reflexes of a seasoned cowboy, Hard West 2 can be a thing of effortlessly cool grandeur.