If you spent any time in Gundam Evolution's tutorial, you would have spent it in the Pale Rider. The prototype Mobile Suit is straightforward to use thanks to its forgiving weapons that, gargantuan size notwithstanding, would feel perfectly at home in most shooters.

The Pale Rider has no exotic weapons and stands out as a boring Mobile Suit stuck among the franchise's most iconic designs. Still, it is no less lethal for its simplicity and deceptively flexible collection of Active Skills, allowing it to hold its own in any situation and punch well above its weight. 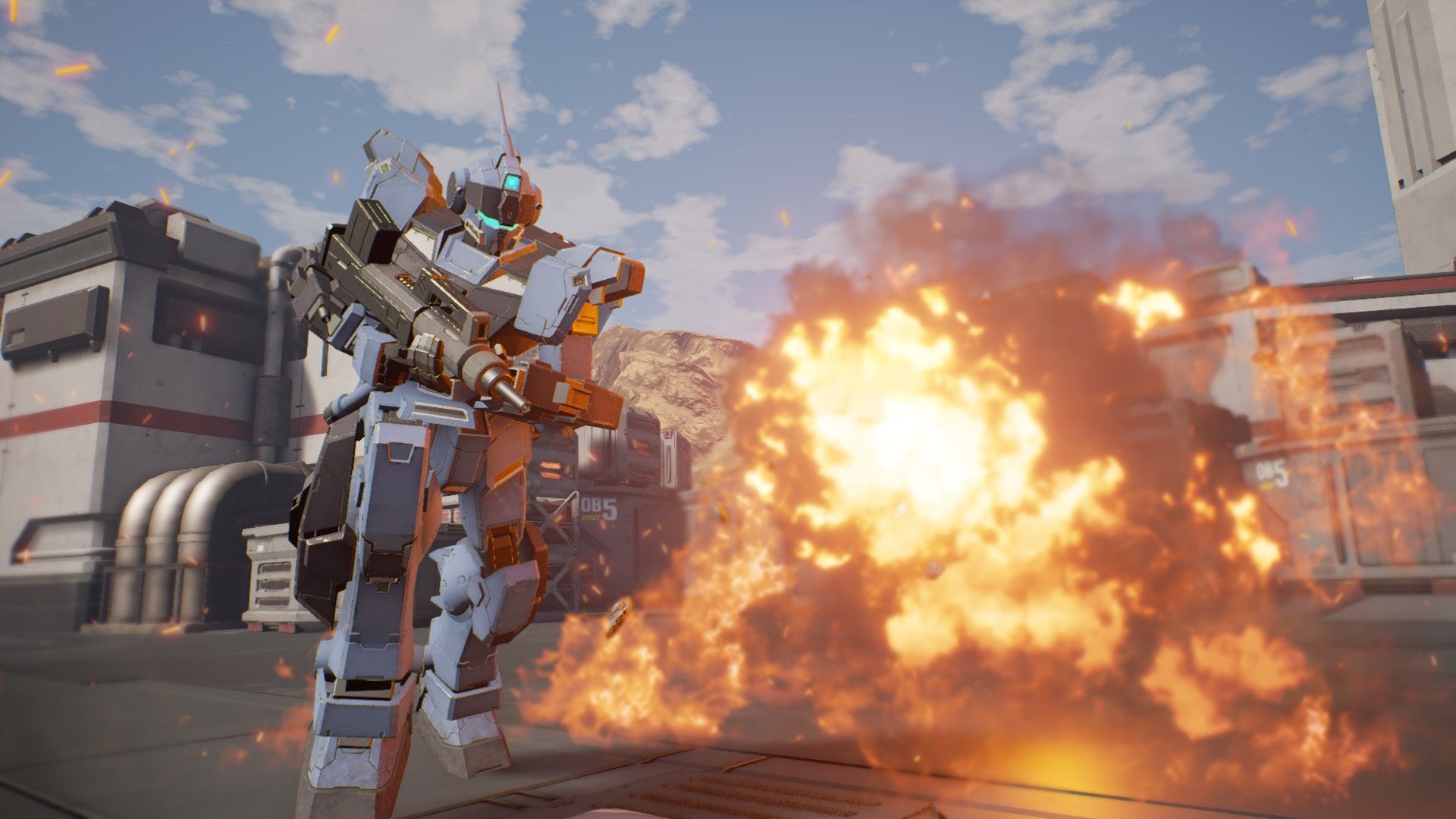 The Pale Rider's main weapon, the Bullpup Machine Gun, shoots fast with heavy recoil. Like the RX-78-2 Gundam, you can steady the weapon to reduce the recoil and loss of accuracy at the cost of your movement speed. The gun can handle itself at close range, capable of devastating enemies when dumping the magazine. At longer distances, firing with short, controlled bursts makes the weapon easier to handle.

Its Active Skills aren't anything flashy, but they are very effective. The Pale Rider's first and second Active Skills consist of a pair of grenades that either slow down or damage enemies. The Mobile Suit's most useful feature is its third Active Skill, Repair Pod, which heals allies in a circular area around it over time.

Its G-Maneuver, HADES, activates a system that boosts its movement speed and improves the Bullpup Machine Gun in all aspects. 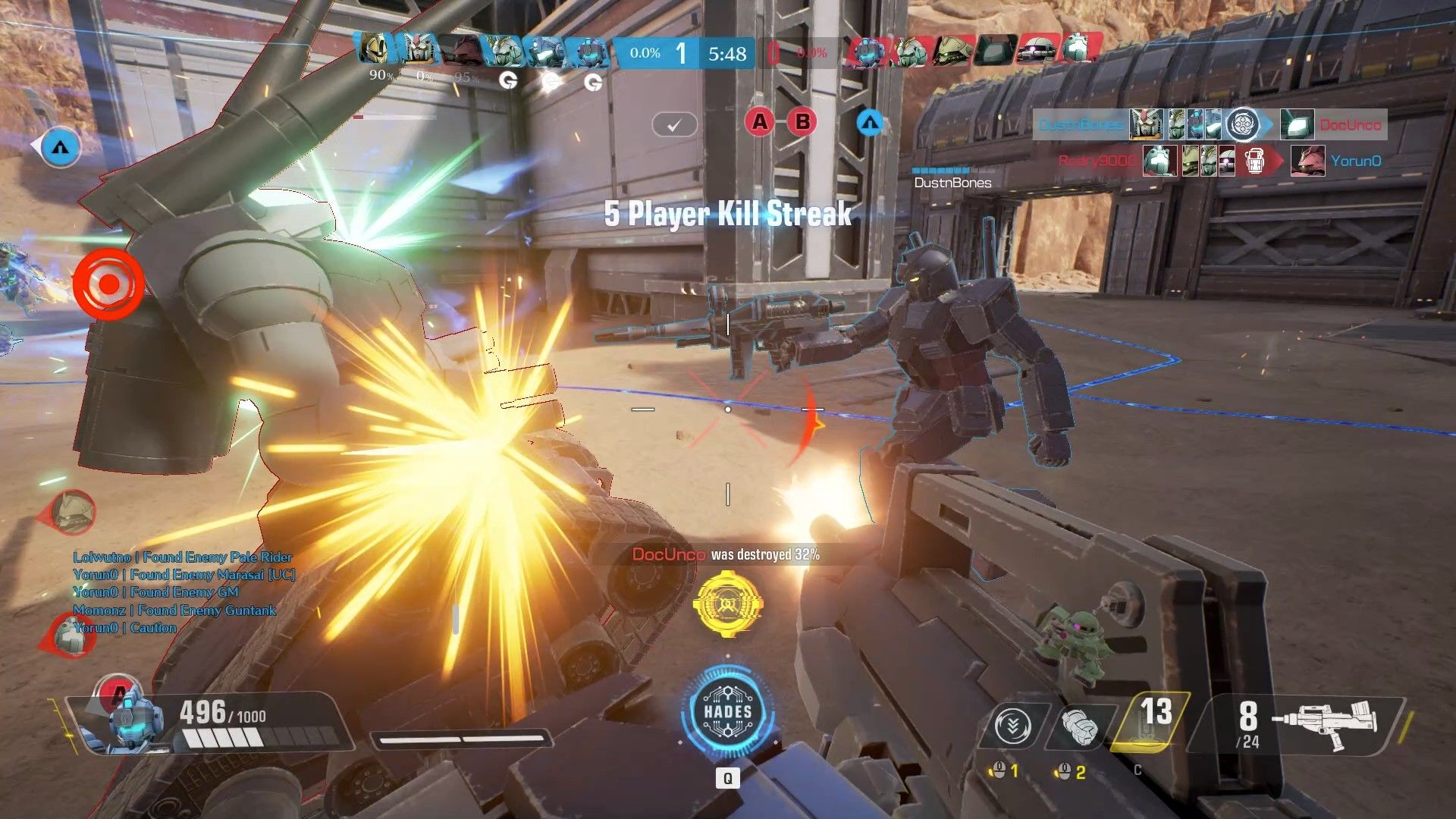 In combat, Pale Rider can hold its own in both medium and close ranges, depending on your target. When dealing with slower-firing Mobile Suits like a DOM Trooper or GM Sniper II, getting in close and trying to out-damage them can be a very successful tactic. Thanks to the Sub Action, Mobile Suits that can't match the Pale Rider's range, like the Ranged Zaku II and Guntank, can be engaged from a distance where it's possible to whittle them down while they can't hit you.

The Bullpup Machine Gun has an upwards recoil pattern. You can control it by "pulling down" on it as you fire.

It's important to recognize that each grenade type handles very differently. The EMP Grenade is thrown a short distance away, only reaching targets close to melee range. Its lack of damage makes it almost useless against distant groups.

The EMP Grenade is highly effective when thrown at nearby targets to cut off their escape or create an opening for your retreat. It ties in well with using the Machine Gun at close range. For example, you may need to slow down an enemy before they can escape to finish them off. It also works perfectly against slowing down a melee Mobile Suit.

The Defensive Power Of The Repair Pod

The Repair Pod gives the Pale Rider fantastic staying power, especially if with your team. Throwing the Pod down before a fight lets you recover health while taking damage, effectively providing more health for a few seconds. This benefit extends to the rest of your team, so group up.

The Repair Pod can be targeted and destroyed by enemies. Hide it behind cover to prevent your Pod from premature destruction.

Give Them Hell With HADES

HADES just makes you better. By moving faster, shooting better, and reloading quicker, you can easily overpower most other Mobile Suits before they can respond. Best of all, the Machine Gun is nearly pinpoint-accurate when HADES is active, letting you aim for the head and hold the trigger down. It pays to be aggressive throughout HADES. Taking careful potshots while in cover will only waste it.

Don't be impulsive, though. You will be stuck in an animation at the start and end of your G-Maneuver, leaving you vulnerable. Make sure to activate it when in safety.