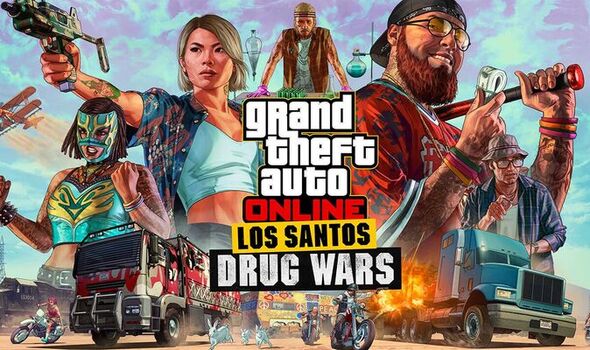 GTA Online fans are counting down to the release of the brand new Los Santos Drug Wars update. Part one of a two-part story expansion, the Grand Theft Auto Online Los Santos Drug Wars DLC has a December 13 release date. There’s no official launch time, but GTA updates typically go live between 12-3pm GMT. Either way, it’s worth changing your settings to auto-update if available.

Los Santos Drug Wars update will be available on all platforms for free, including PlayStation 5, PlayStation 4, Xbox Series X|S, Xbox One, and PC.

The story content sees players team up with Nervous Ron to supply potent hallucinogenics to the residents of Los Santos.

Rockstar explains more: “Head straight to Blaine County and join up with old pal Nervous Ron and a new band of out-of-state misfits on a mission to put their stamp on the Los Santos psychedelics trade.

“Fight off an unlikely coalition of wealthy hippies and trigger-happy bikers while cooking up potent hallucinogenics — in elaborate labs or out of your own massive rolling chemistry set — in the opening chapter of an expansive new two-part story update for GTA Online.”

According to Rockstar, the update will add new missions, new vehicles and a host of “experimental upgrades”.

The Grand Theft Auto developer is also teasing the release of new Christmas-themed items and upgrades, which are expected to launch within the next week.

“And this is just the first dose — be prepared for lots more exciting events, including some jolly holiday hijinks, significant story and gameplay updates, and much more to come.”

The Los Santos Drug Wars expansion is expected to launch alongside a new gameplay update, so check back soon for patch notes.