You are here:
Home / Godfall: How To Defeat Grieves Sunsteel

Godfall: How To Defeat Grieves Sunsteel

Godfall is not short on fire-based enemies and bosses, but none quite live up to Grieves Sunsteel. A mountain of a man, Grieves Sunsteel is first amongst Godsmiths, and honestly, his title should instill some level of terror into you. This guy forges weapons for literal gods – and he’s the best at it.

Being a deity-pleasing blacksmith is one thing, but Grieves is also an incredibly potent combatant, and master manipulator. Before Orin can get two words in, Grieves is already trying to sway him to the Darkside. When rejected, Grieves grabs his mighty hammer and staunch bucket and charges headlong to beat some sense into you. 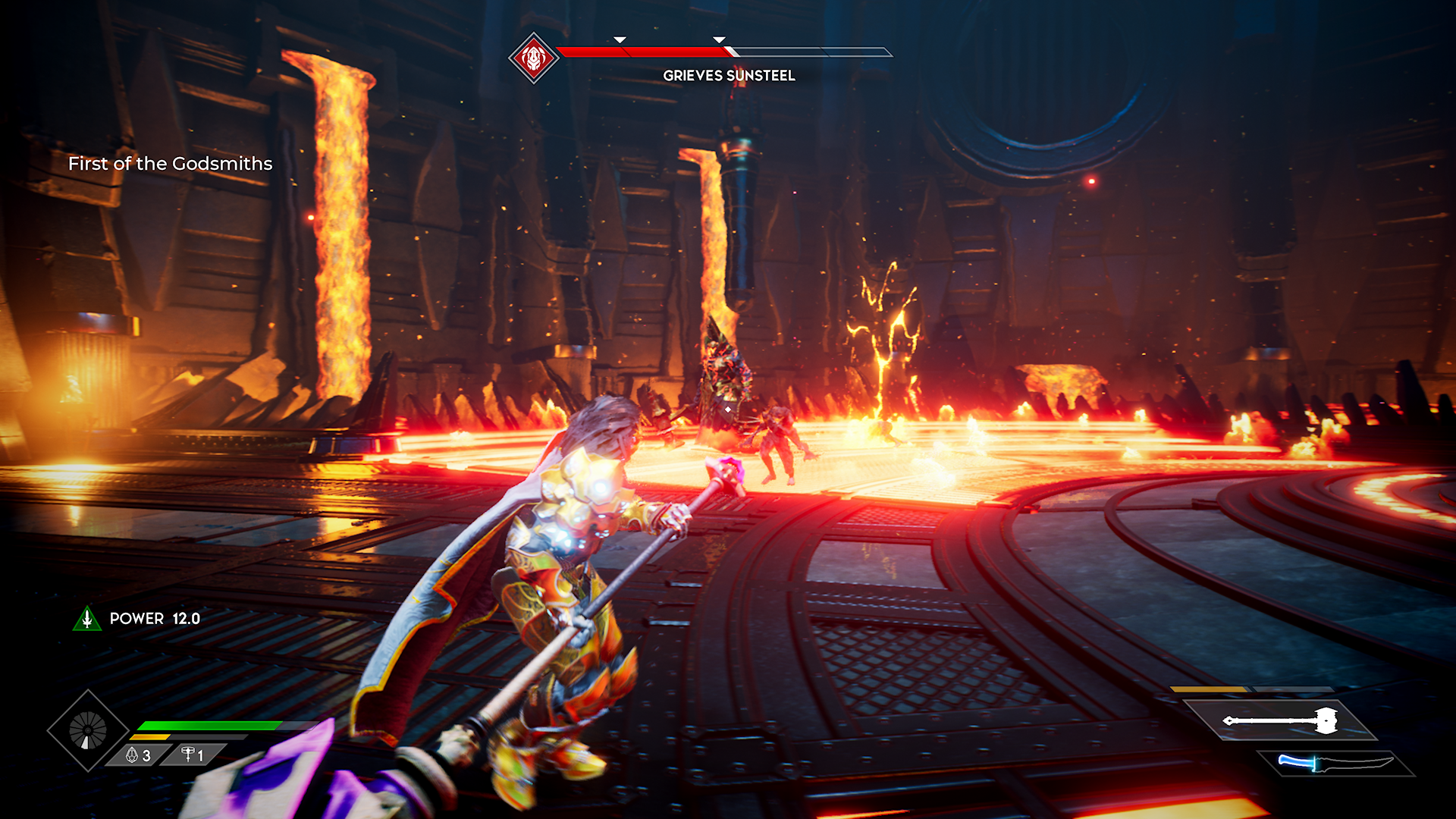 Grieves is unique (so far) in the sense that he has truly a ridiculous number of Power Attacks. Everything from stamping his feet, to swinging his hammer, to jumping around, to even yeeting lava at you – it’s all unblockable. That’s only the beginning too – this fight has a whopping FOUR phases and Grieves is more than willing to drag this fight out.

Phase Two will trigger once Grieves Sunsteel has lost roughly 25 percent of his HP. He will immediately retreat to one of the grated segments of the arena. This will be the start of a new gimmick that will persist through the entire fight, He also gains some attacks whilst retaining his old ones.

Phase Three will start once Grieves hits 50 percent HP, and he becomes even more dangerous. His attacks are more aggressive, he is more relentless, and his arena manipulation is expanded.

Grieves Sunsteel is getting desperate at this point, but he is also getting more dangerous. Everything you’ve seen thus far is dialed to eleven. More areas are set ablaze, more minions are summoned from every corner of the map, and more fireballs are launched your way. The same counters apply, only you will have to move more carefully and deal with more things flying at your face. 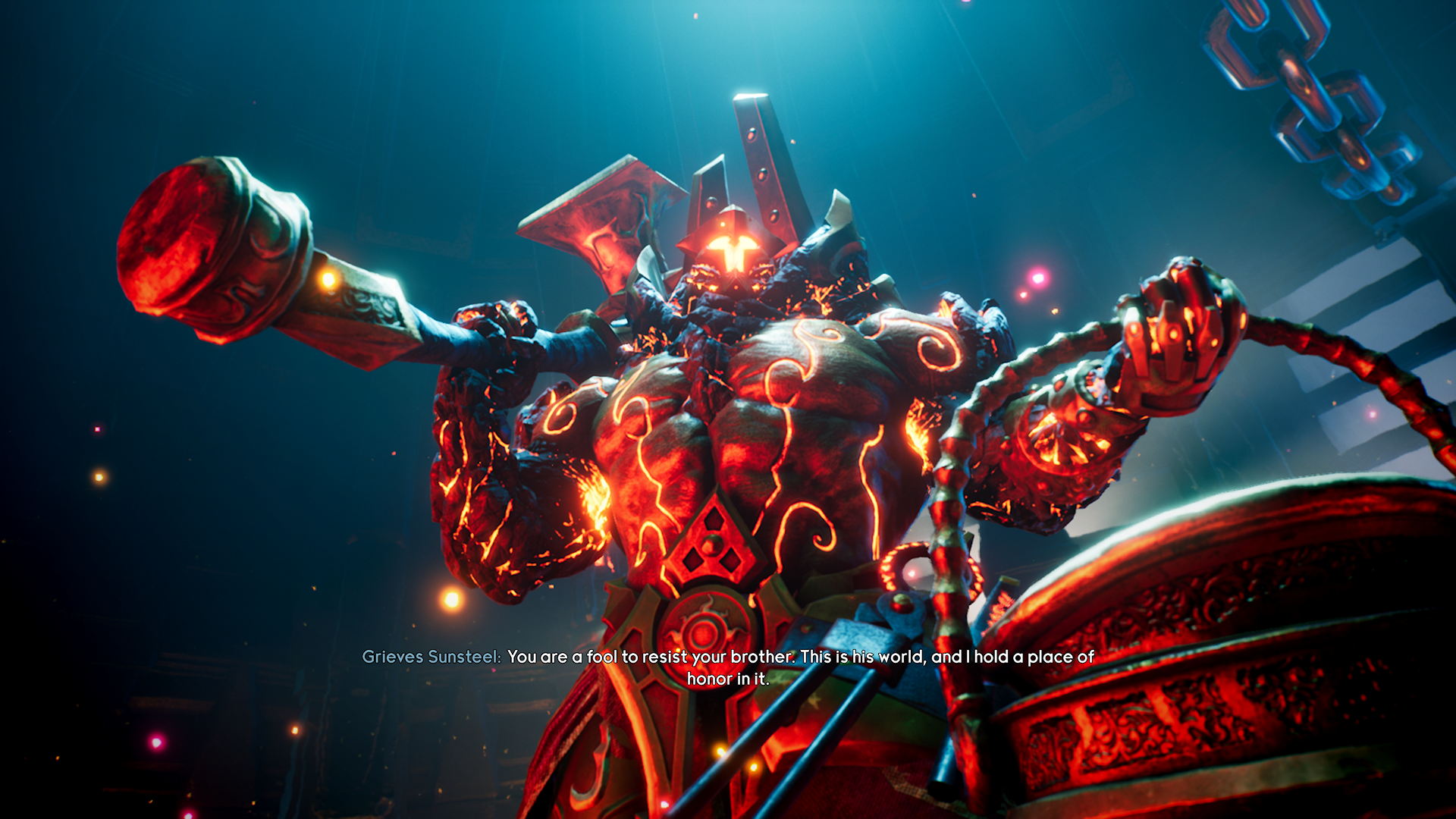 Fighting Grieves Sunsteel before you take out his lackeys is a recipe for disaster. This is already a difficult fight, and piling on potent debuffs will only lead to disaster. Kill them in their hunts first, and then take on Grieves.

All kinds of abilities can do work in this fight, but the two that stand above the rest are Finesse and Weak Points. Finesse will increase the efficacy of your Dodge, and unlock the ability to cancel your Dodge and go into a slide.

Weak Points will show points on Grieves that can be struck for bonus damage. Not only that, but you will see blue points that, if struck, will stagger Grieves making the fight easier. This will require heavy investment into the skill tree, however.

You could also consider buffing your Weapon Techniques to reduce cooldown, or investing in Shield Throw to give you more ranged options. Grieves likes to hide in his fires, so having ways to deal with him more often can shorten the fight.

For weapons, Dual Blades, Polearms, and Hammers are fantastic. Dual Blades and Polearms are fast, and can quickly respond to Grieves' attack after you have dodged his flurry. Polearms also have the added benefit of having a ranged Weapon Technique.

Hammers on the other hand are much slower but are excellent for countering Grieves Sunsteel and landing crushing blows on his weak points. You can take two weapons, so consider bringing a Polearm and Hammer and swapping when required. 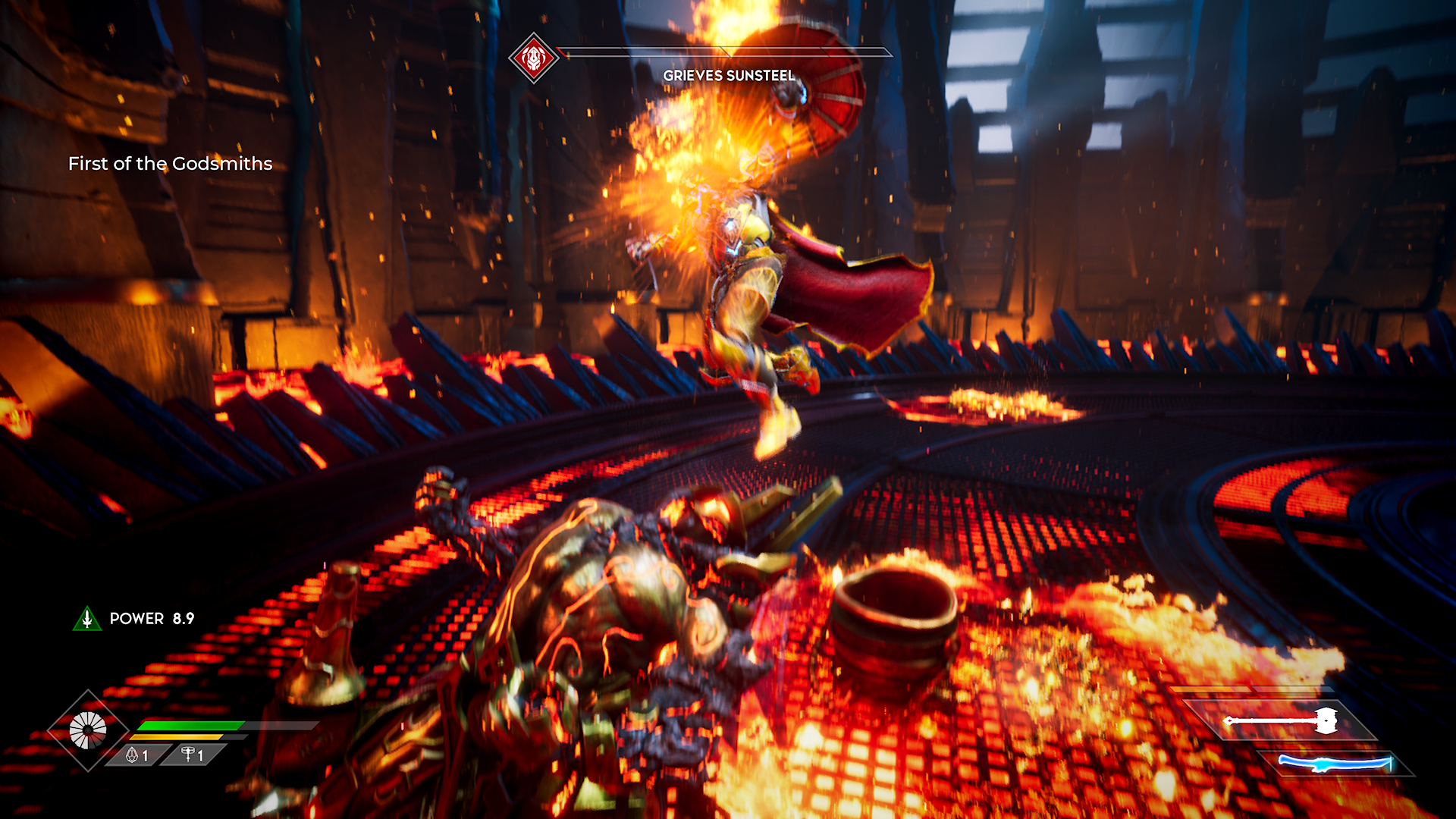 This battle can be long, arduous, and pretty darn difficult. A lot is happening on screen, and it’s easy to be overwhelmed – especially in later Phases. Just remember that so long as you knock Grieves down a health bracket, death will allow you to retry from that Phase. You can win with attrition if you need to.

When it comes to a battle plan, this boss is very reactive. You need to dodge his endless supply of Power attacks and then counter with devastating hammer blows or rapid spear thrusts. Don’t get greedy though, as Grieves is surprisingly fast and you don’t want to get caught up in his flames.

As the fight progresses, make sure you deal with any minions before luring Grieves out of the flames with ranged attacks. Once he is out of the flames, then continue dodging and counterattacking. The power of Weak Points as a skill cannot be overstated, as this will not only increase your damage but will open new ways to stagger Grieves.

Grieves will occasionally try to use a blue Perilous Attack. You want to parry these every time you see them to stagger him. This can lead to massive damage – even more so if you invested in Weak Points.

Even though Grieves gets more powerful as he cycles through his Phases, he doesn’t really change all that much – especially once you hit Phase Two. You just need to take what you’ve been doing and apply it in a more hectic environment. Once you’ve cracked it, Grieves should go down without much hassle.