You are here:
Home / Godfall: How To Defeat Falcius Diarch

Falcius Diarch is going to be one of the hardest bosses you have fought in Godfall or the easiest. This is a double boss fight, and they have one big gimmick that elevates them from regular enemies with a larger health pool, to a legitimate threat that can take way more punishment than they really should.

The Falcius Diarch are fast, they cover each other, and they are aggressive, but they don’t do too much damage. They are all about overlapping their attacks, knocking you back, and healing ludicrous amounts of damage. They are more than capable of healing to full health if you let them, and unlike you, their healing has no limits. 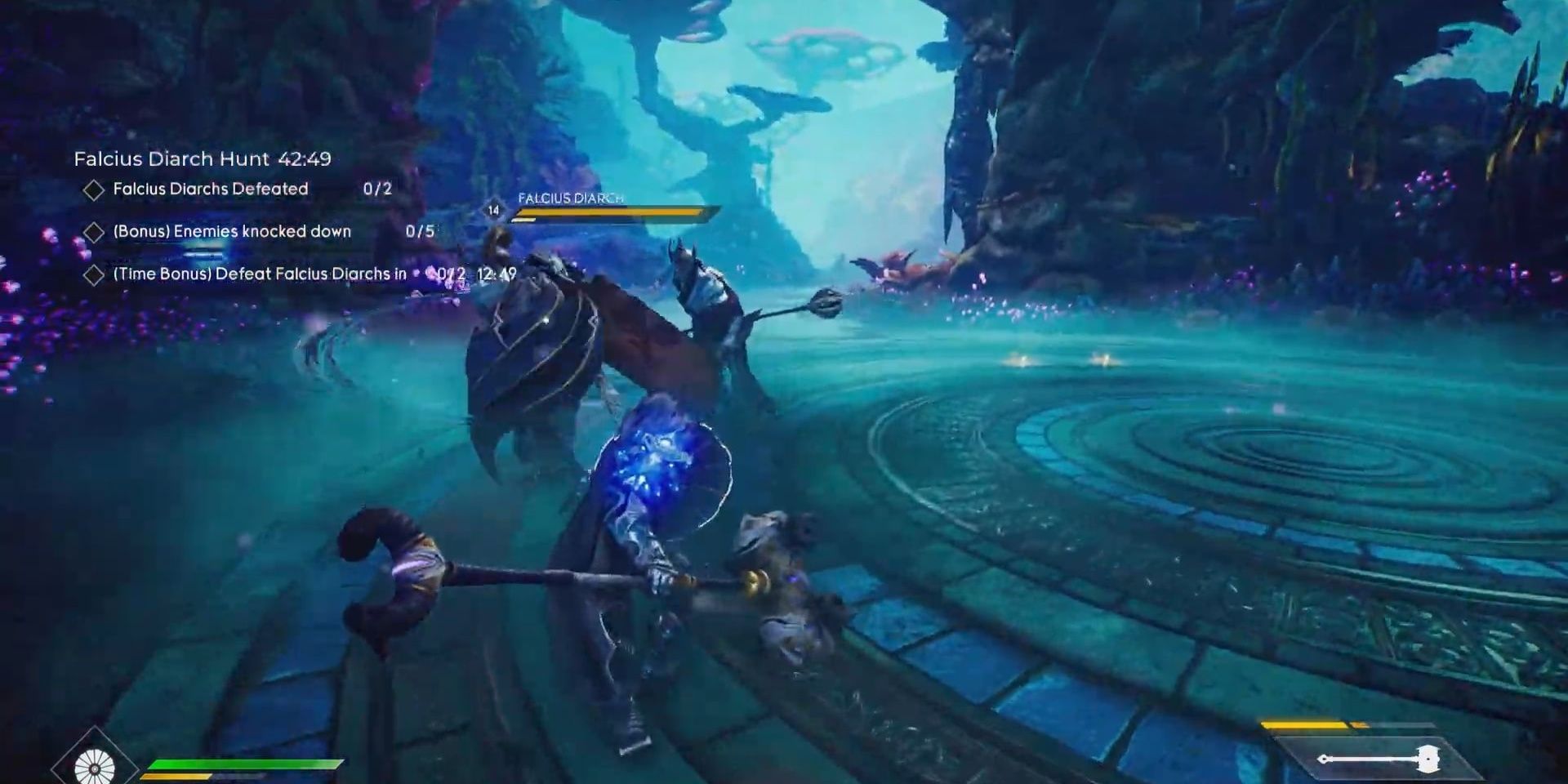 Unlike every other boss thus far, Falcius Diarch doesn’t really have many defined attacks. These are armored enemies that carry spears, swords, and shields. They aren’t fancy, but they are effective. The Sword and Board half of the duo will often shield bash you to stagger and knockdown, whilst the Spear half will stab, sweep, and jump to deal damage.

They will both occasionally go for blue attacks, giving you a chance to parry and stagger them – which opens them up to huge damage. The issue is – they don’t sync up their blue attacks. So you could stagger on, and the other will simply interrupt your punish.

Their gimmick is the ability to heal vast amounts of HP. They will heal from near-death to half health, and from half health to full. This makes them incredibly durable, but they aren’t unkillable. In fact, their heal leaves them open to huge punishments.

When healing, Falcius Diarch will kneel and gain a bunch of grey health before quickly healing. This grey health can be countered by doing a Heavy Attack (running Heavy is the quickest way to execute this attack), and then attacking them when they are immobile. 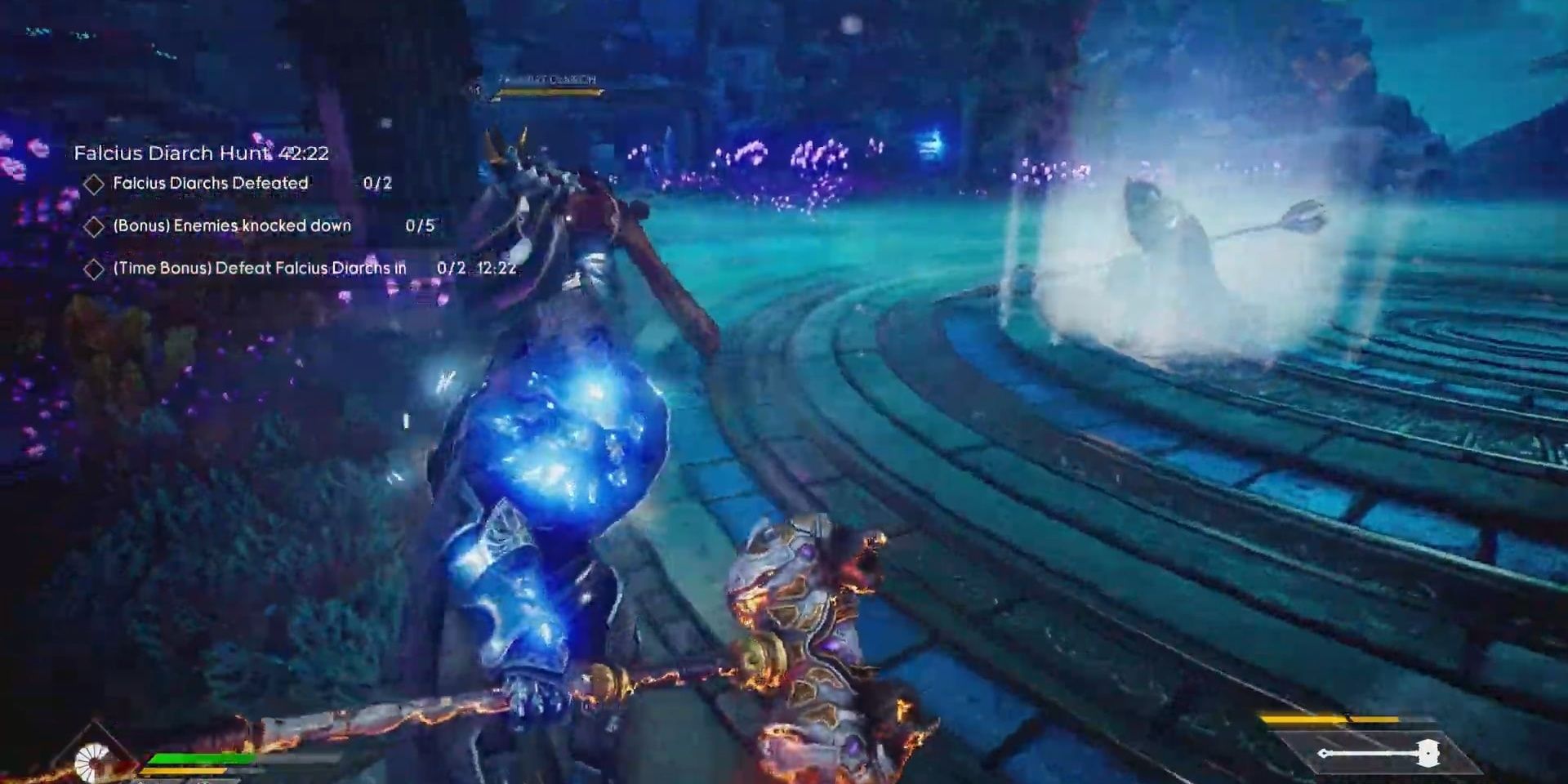 For this fight, you don’t want to get interrupted. As a result, you should really bring something with a lot of heft. A big hammer or greatsword will do the trick. The slow speed is not an issue, mostly, because you can sprinting Heavy to quickly Soul Shatter when needed.

Archon Fury is excellent for this fight, as neither Diarch is particularly tanky (outside of their endless healing). You can start the fight fully buffed up and devastate a single Diarch, Soul Shatter their heal and finish them off before the buff wears off. 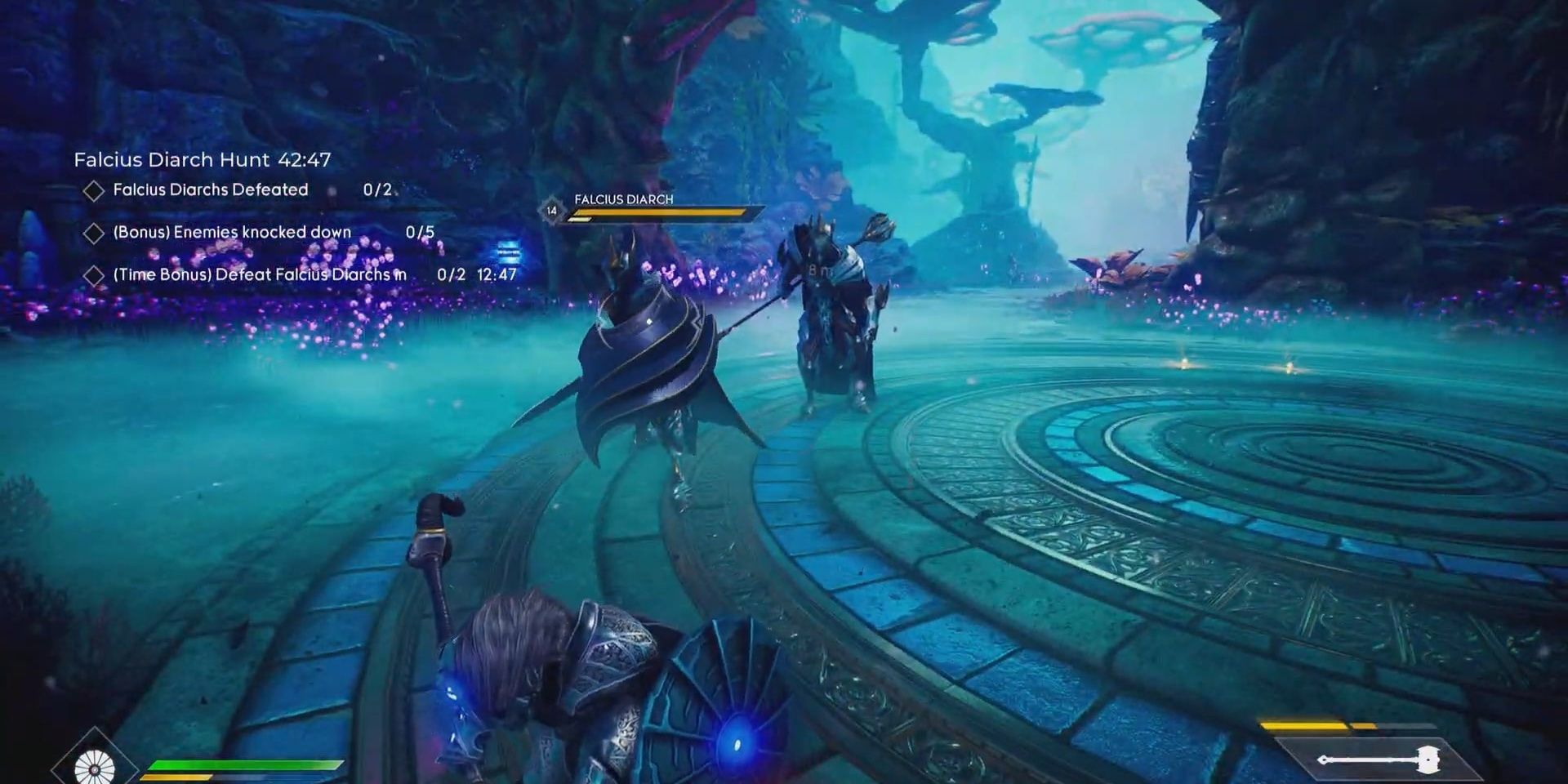 For this fight, you need to focus down a single Diarch and beat them to death as quickly as possible. Burn Archon Fury, be aggressive, use big weapons. The moment they try to heal, use a sprinting Heavy to break their Grey Health and then hit them until they die whilst they are immobile.

With only one Diarch alive, this fight becomes much easier. Just smack it around, interrupt its healing, and finish it off.

If you let the Falcius Diarch heal, or you split your damage across them both without any real plan, this fight can take a long time. The duo is brutal if you don’t respect their gimmick. Go in aggressive, but stay focused. Kill them one at a time.