You are here:
Home / God Of War Ragnarok’s Best Set Piece Is A Mead Hall Brawl

This article contains late-game spoilers for God of War Ragnarok.

God of War Ragnarok has some pretty incredible set pieces. There's the climactic battle that gives the game its name, as Kratos and Atreus lead the Nine Realms in a blockbuster charge against Odin, with Valkyries and Dark Elves flying by overhead and Ragnarok stomps around, looming over the battlefield.

There's the early fistfight between Kratos and Thor, which mirrors the bruising Baldur fight of the first game. Then there's everything with Garm, the giant wolf with the ability to claw his way through the realms, who Atreus and Thrud set free. Given its title, it's unsurprising that God of War Ragnarok is a game of epic spectacle. What is surprising is that my favorite set piece ended up being one of the smallest: the Asgard-set mead hall brawl.

The stakes for this set piece are small. Atreus needs Thor to accompany him on a mission to find the last shard of Odin's mask. Unlike in much of God of War Ragnarok, the fate of the world and/or the fate of characters we love don't hang in the balance when Atreus follows Thrud to the mead hall. But, as the scene goes on, it becomes increasingly clear that though the stakes are small, they are personal. And when your characters are gods, personal problems can quickly escalate into big, world-shaking events.

They don't reach those proportions in this scene. In fact, it begins by gesturing away from violence, as Atreus and Thrud are required to put up their weapons when they enter the hall. At first, we get the quiet disappointment as Thrud pleads with her father to get his shit together. Angry and increasingly rowdy, Thor chucks a beer stein at Atreus's head, but Atreus ducks and it hits one of the Einherjar standing behind him. Thor takes the opportunity the scuffle provides to start brawling and soon you're caught up in a big loud bar fight. Atreus and Thrud just want to get Thor out of the bar, so they're fighting on his side.

Though I really enjoyed God of War Ragnarok over all, the narrow field of view its closely following camera provides tends to make even epic moments feel a little intimate. The old games would often zoom out to show the sheer Hydra-beheading scope of the antics Kratos was getting up to, but 2018 and Ragnarok keep us close on Kratos or Atreus almost all the time. It can sometimes hold those big moments back from feeling truly momentous.

This weakness is turned to an advantage in the mead hall brawl. Instead of making something grand feel small, the camerawork here makes something small feel explosive. Santa Monica Studios invert the level the game usually operates on. Being locked into Atreus' perspective feels exactly right for a barroom brawl, the genre of fight in which you are most likely to get hit over the head with a piece of furniture. 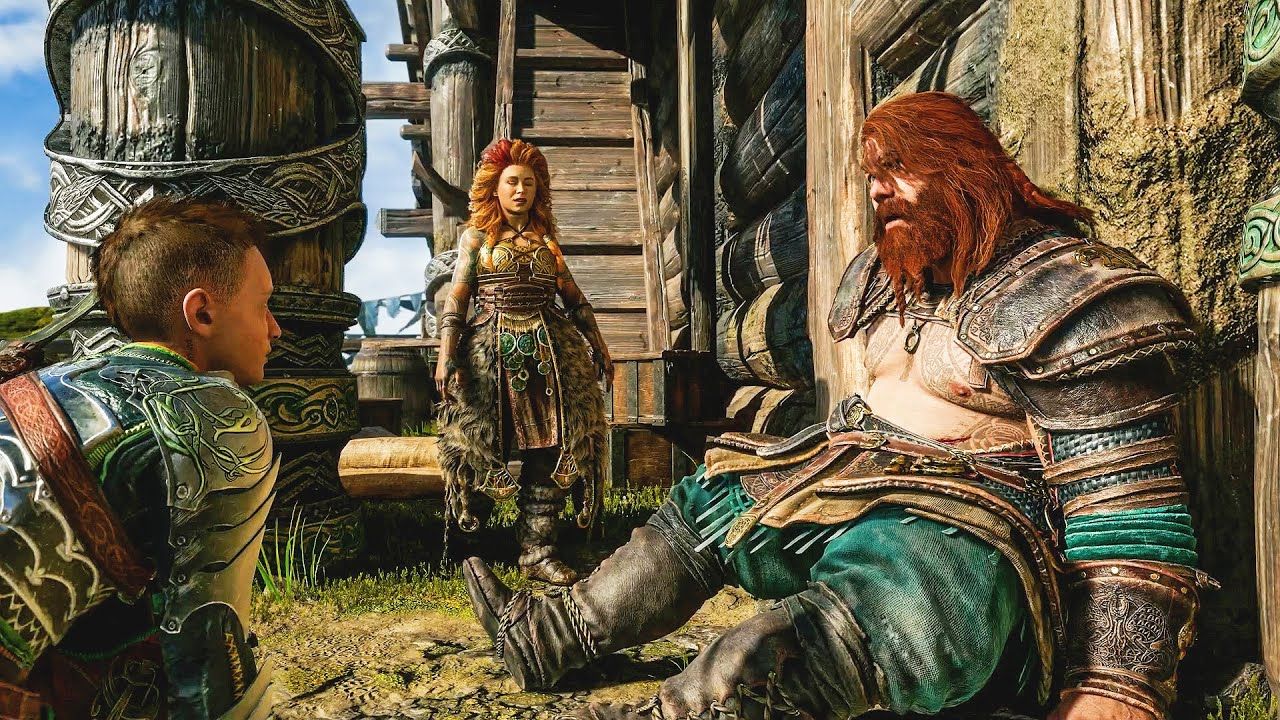 As the fight goes on, the effect of a god being in a bar fight becomes clear. At one point, Thor chucks one of the Einherjar onto the busted table where Atreus is wailing on an opponent, catapulting the young warrior up onto the second floor. A little later, the balcony Atreus is standing on collapses beneath his feet, and he slides down to the main floor. The Uncharted games often stage set pieces like this, but even the adventures of Nathan Drake — a mere mortal — are rarely this cramped.

It ends where it starts. After Atreus and Thrud carry Thor out of the hall, Thrud pleads with Thor to stop drinking and clean up his act. Binge drinking can bring with it a whirlwind of outrageous highs and despairing lows, and the mead hall set piece manages to pretty adeptly capture both extremes, and show how each feeds into the other.

People often say that the side quests are the best part of a game like God of War Ragnarok and, while this moment is on the critical path, it feels like it could be part of a side quest. It doesn't need to happen. But, it adds texture to Thor and Thrud's relationship, and it feels like Santa Monica Studios finding the fun in an unexpected — and not strictly necessary — place.