You are here:
Home / God Of War Ragnarok: 10 Most Beautiful Locations

God of War Ragnarok continues to be the best kind of sequel you can ask for, taking all the enticing elements of its predecessor and expanding on them on all fronts, especially the vast areas and environments. With all nine realms now readily available, there's no shortage of absolutely stunning regions for you to explore.

From the jungle brush of Vanaheim to the autumnal flora of Jotunheim to the vast frozen expanse of Midgard and the dreamy water-filled lands of Svartalfheim, there's a location of beauty to be found within every map. Below are just a few of the most dazzling the Norse world has to offer. 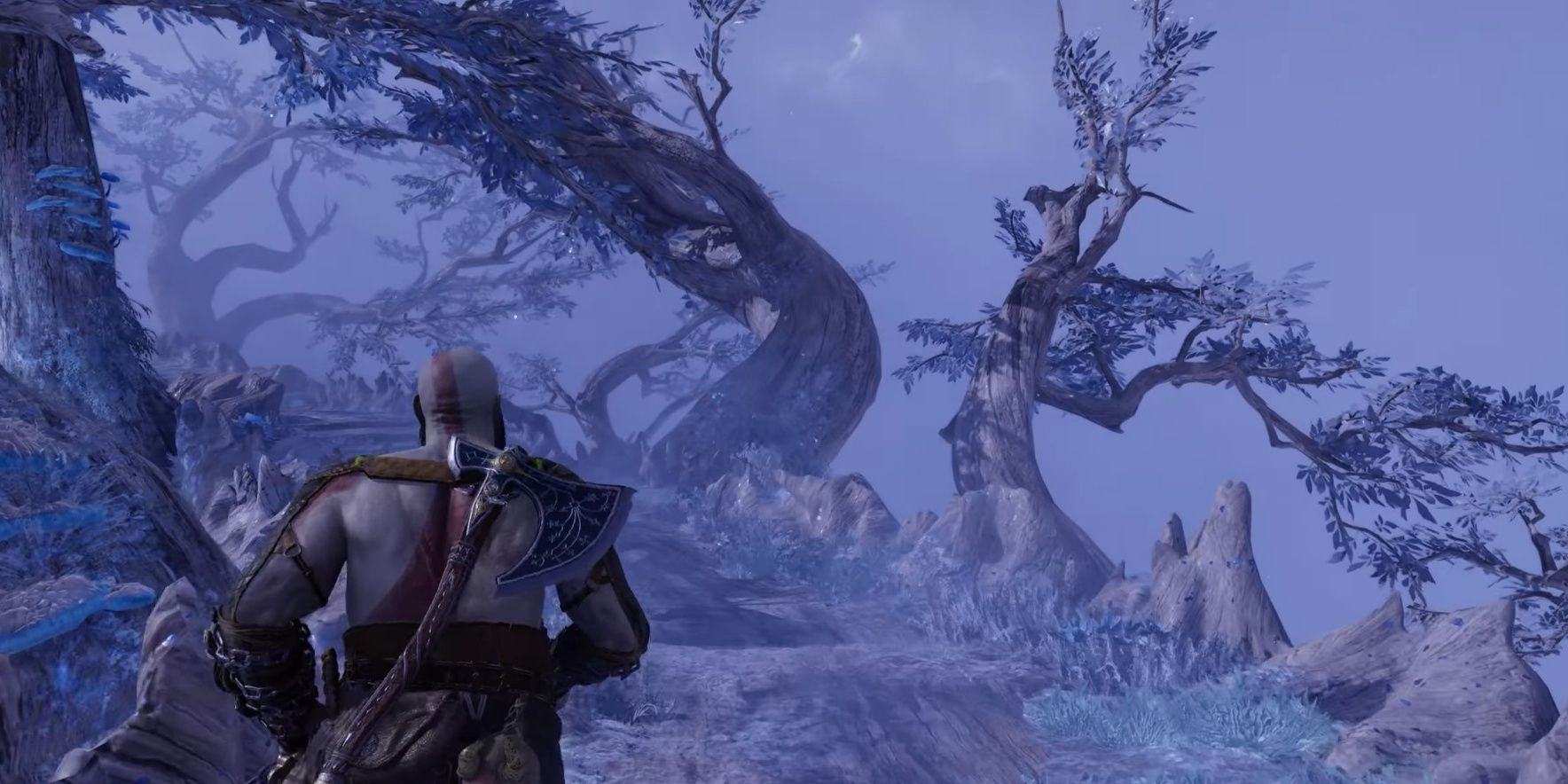 In God of War Ragnarok, travel between realms occurs through Mystic Gateways, which lead you along a long winding branch connected to the radiant World Tree, or Yggdrasil, as you await a door to your destination. You can unlock these fast travel points once the dwarf brothers Brok and Sindri invite you to stay at their home established within the World Tree.

With Ragnarok in full swing and Odin in pursuit of Kratos and Atreus, the Mystic Gateways become a prominent part of their journey. God of War even makes the brief traversal of the World Tree worthwhile with all the beautiful hazy purplish and blue color tones cascading the environment, and the leafy branches arching over the passageway are a wonder to take in. 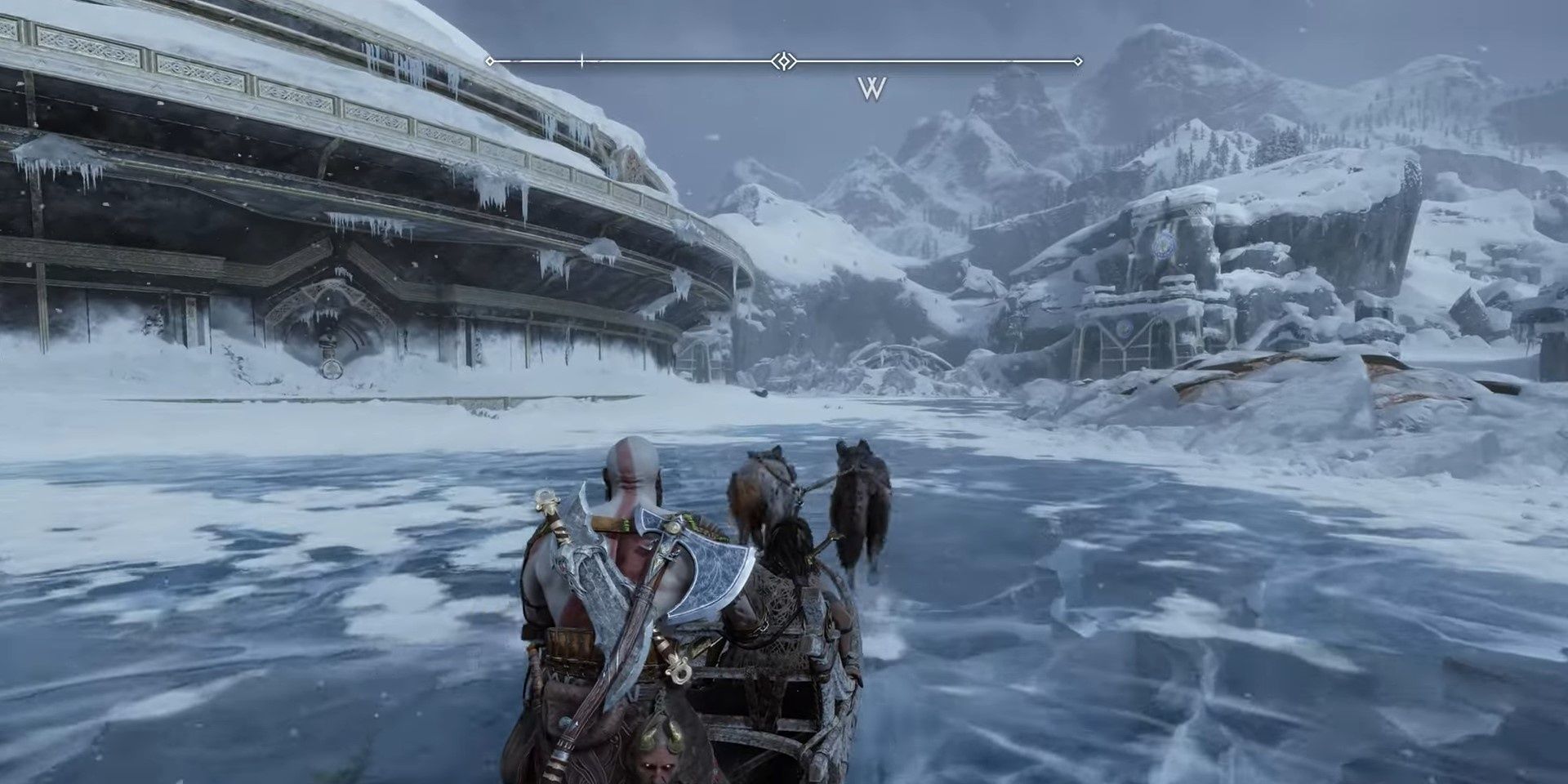 Due to the onslaught of Fimbulwinter, much of the landscape throughout the nine realms has undergone a complete transformation. The most staggering change affects the now frozen-over Lake of Nine in Midgard. The Lake of Nine was an important central hub area you could boat across in the first game, where you could encounter the World Serpent and access Tyr's Temple.

The translucent crystal blue surface of the frozen Lake of Nine and its adjacent snow-piled buildings are all visually striking as you sled across it. It's a drastic look due to the unfortunate frosty demise, but one that elevates the lake’s natural beauty and delicate composition. 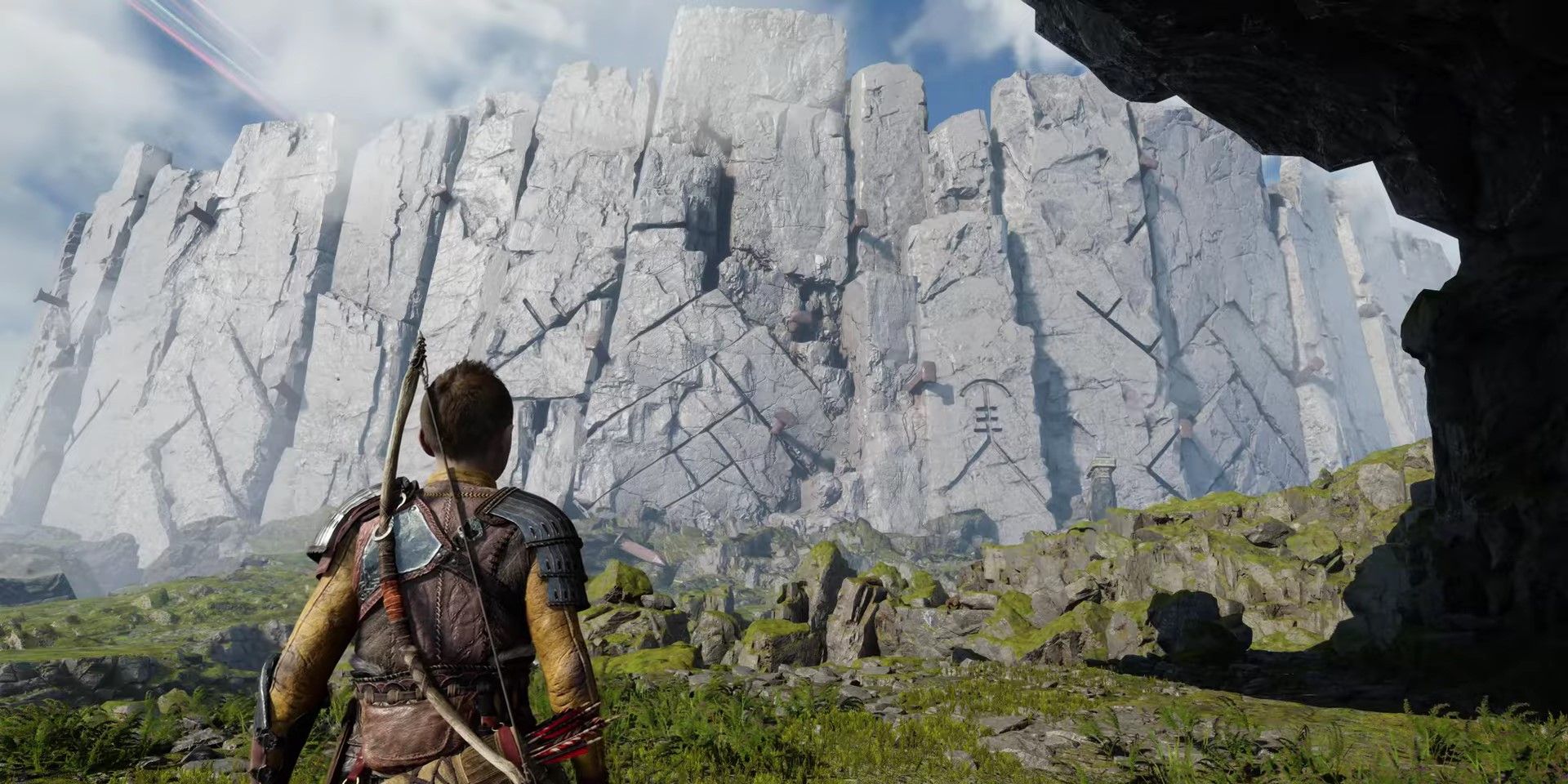 The realm of Asgard is one you often revisit throughout the main story, but none of the other moments that take place there quite capture that sheer awe of the first time you get dropped in by Odin's ravens. You're thrust straight into the water of the gorgeous marshlands of the Plains of Ida, where the river takes you right toward the towering Hrimthur’s Wall that defends Gladsheim.

The Wall is a magnificent structure to behold in terms of its immense scale and detail, becoming even more apparent when you scale it. The mountainous gray stones inscribed with various runes overlooking bright green moss-covered rocks that form the environment and iridescent rainbow streaks of the Bifrost protruding in the sky present a stunning contrast to the frozen wasteland of Midgard. 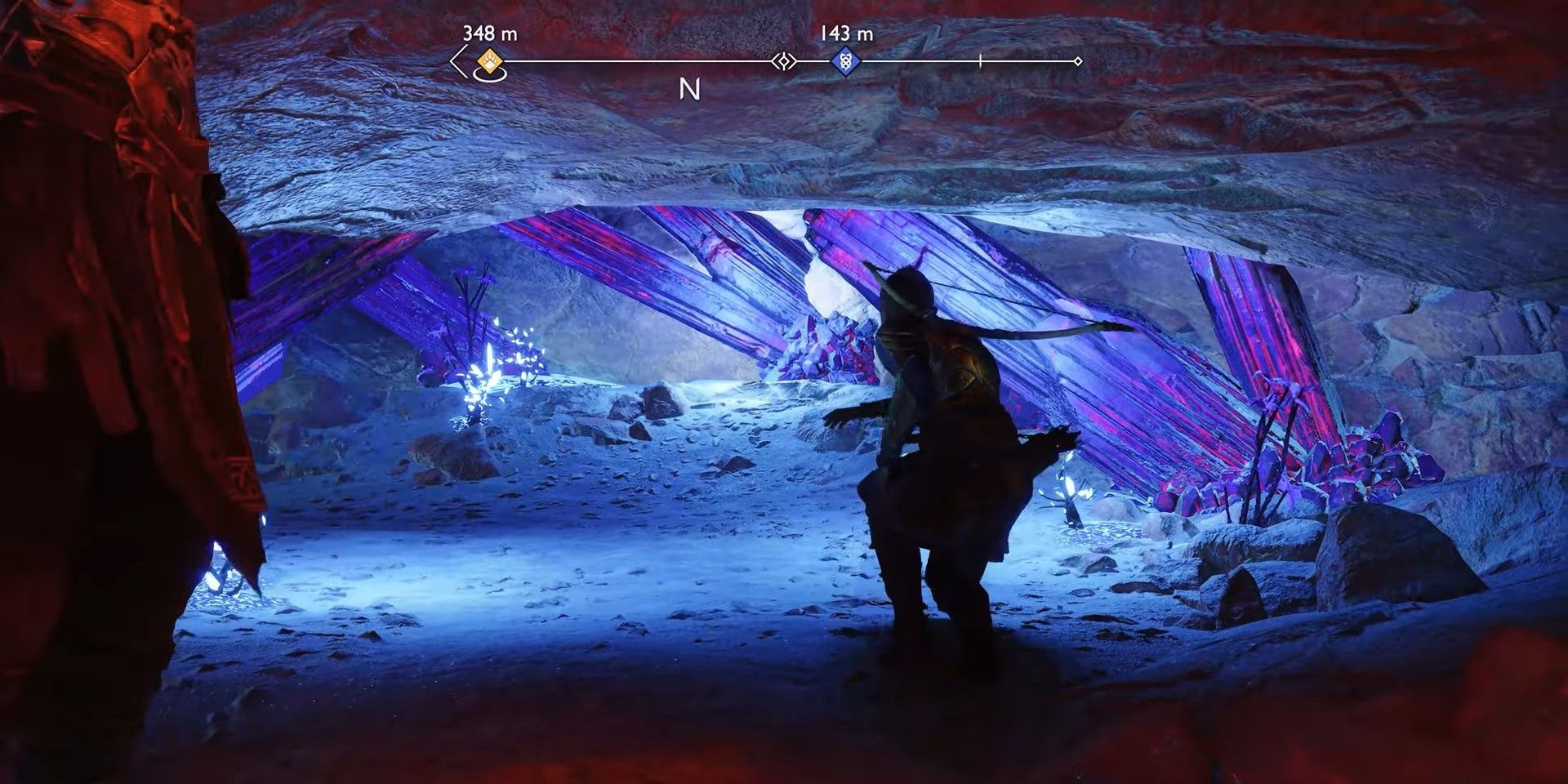 God of War Ragnarok offers an even deeper exploration into the elven home of Alfheim. The dark desert surface and red clay rocks that populate the map may not be the most extravagant thing you’ll see, as the beauty lies beneath. Your descent into The Below region of Alfheim comes up in a thrilling side quest called ‘Secret of the Sands.’

You battle swarms of dark elves to get to the giant jellyfish creature named Hafgufa that's trapped and in need of setting free. At first, the environment seems more of the same, but it gets much better the farther in you are. The best section is the short tunnel containing large blue and pink crystal gems that are leaning and illuminated by the glow of the plants. 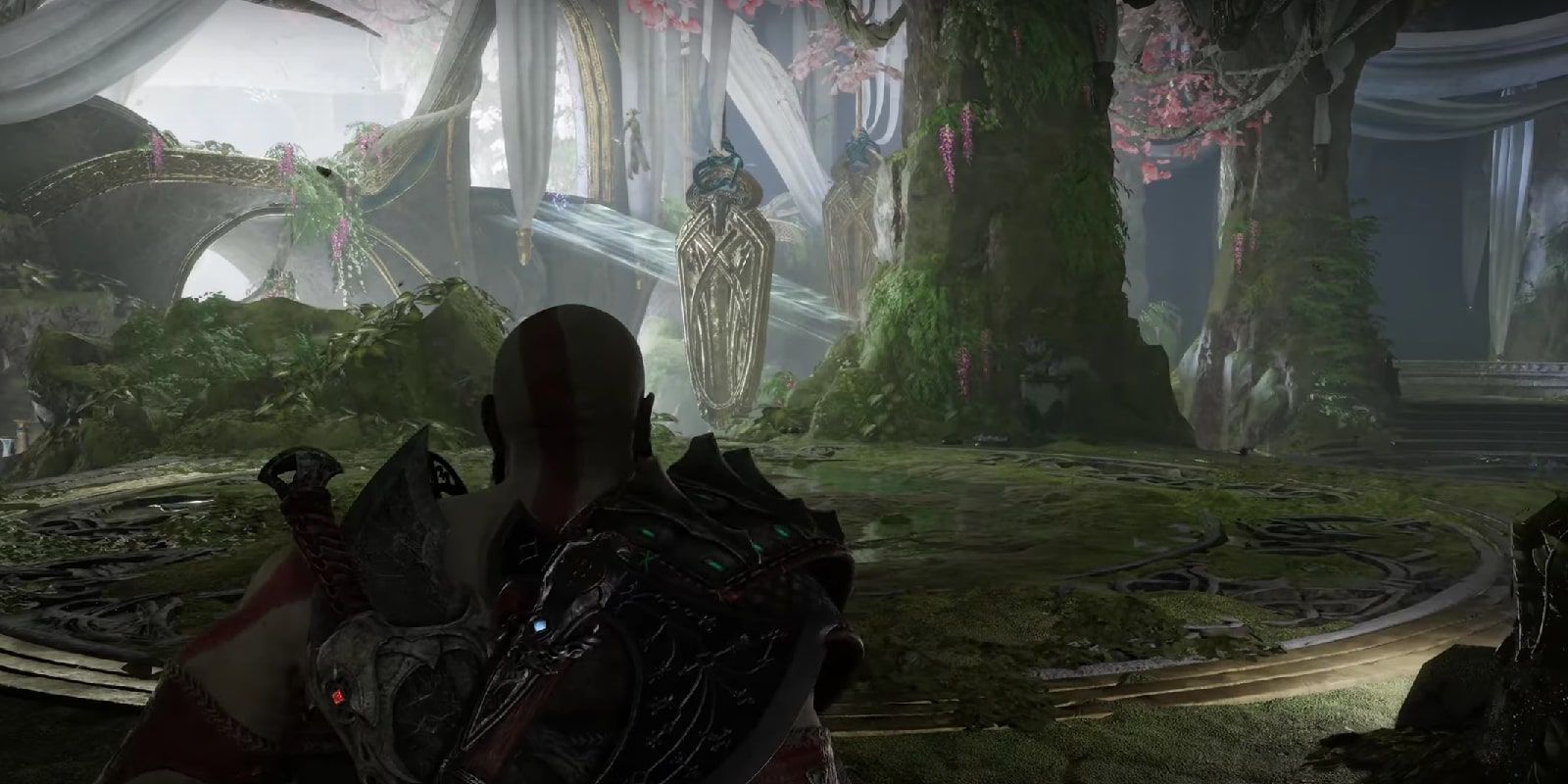 Alfheim hosts desert lands populated by dark elves as well as the sanctuary of the light elves, which is the Temple of Light. If you recall, the Temple of Light was a prominent area of the earlier game that involved puzzles with large blue crystals to form translucent bridges. In Ragnarok, as a result of Fimbulwinter, the Temple has likewise become prettier.

The bright ray of light powered by the Lake of Souls throughout the Temple is the centerpiece of every level and illuminates the vibrant environment art. It's a stark contrast to the world of the dark elves, rightfully so, highlighted by excellent lighting, the elegant colors of pink from the leaves and green emanating from the mossy ground, and the superb elven architecture. 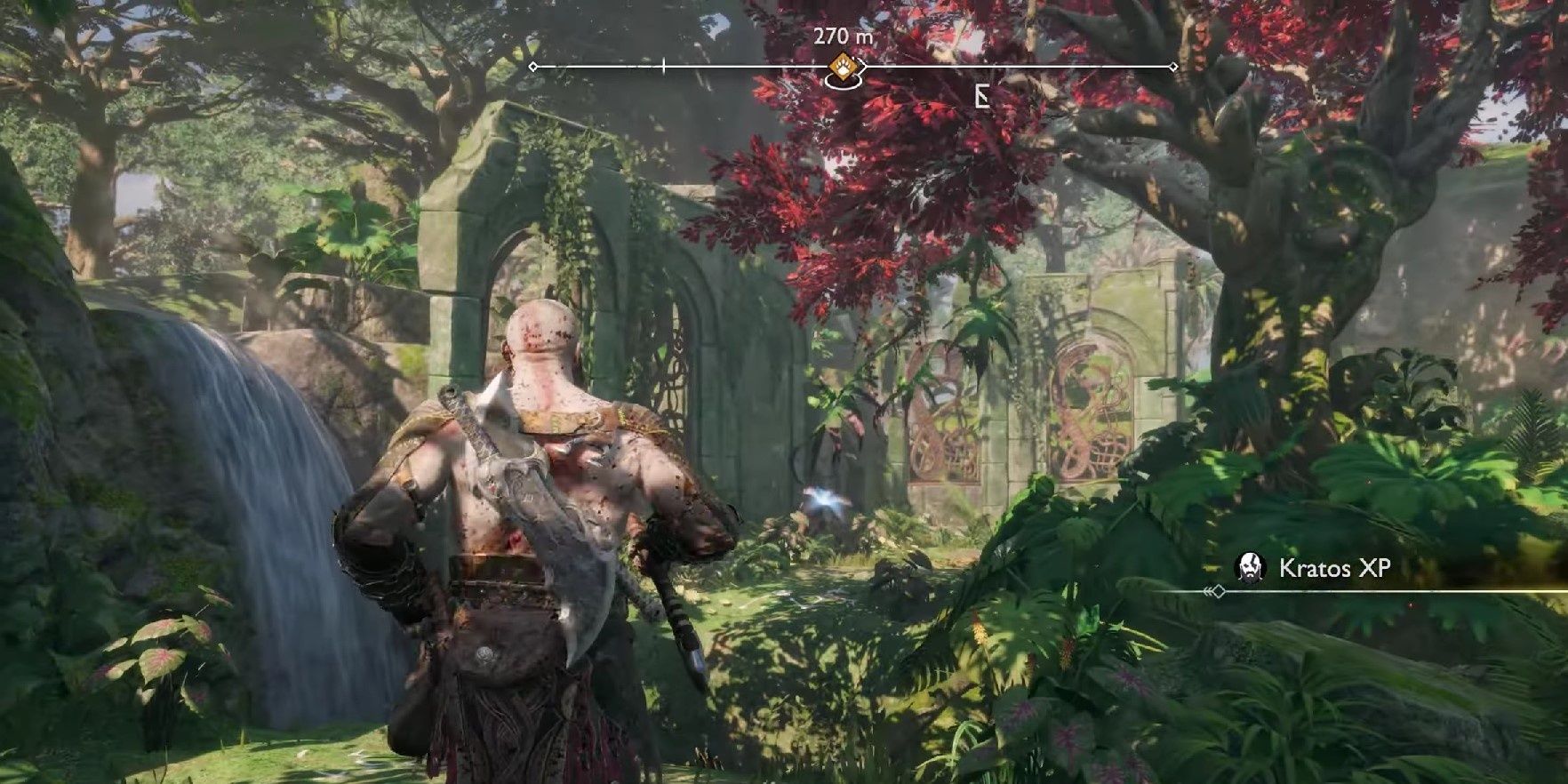 Vanaheim is the lush jungle realm in God of War: Ragnarok and Freya's former home. In your efforts to recruit Freya to help join the fight against Odin, you must accompany her to Vanaheim for a set of missions. After she shares a warm reconciliation with her brother Freyr in his camp, you arrive in the Western Barri Woods.

The Eastern Barri Woods also exist, but their dark lighting and creepier ambience can’t compare to the pleasing sights of the Western parts. The landscape features lavish waterfalls, crimson red trees against the backdrop of the green foliage that engulfs every inch of the area, and stone archways connected to larger inscribed structures overgrown with vines. 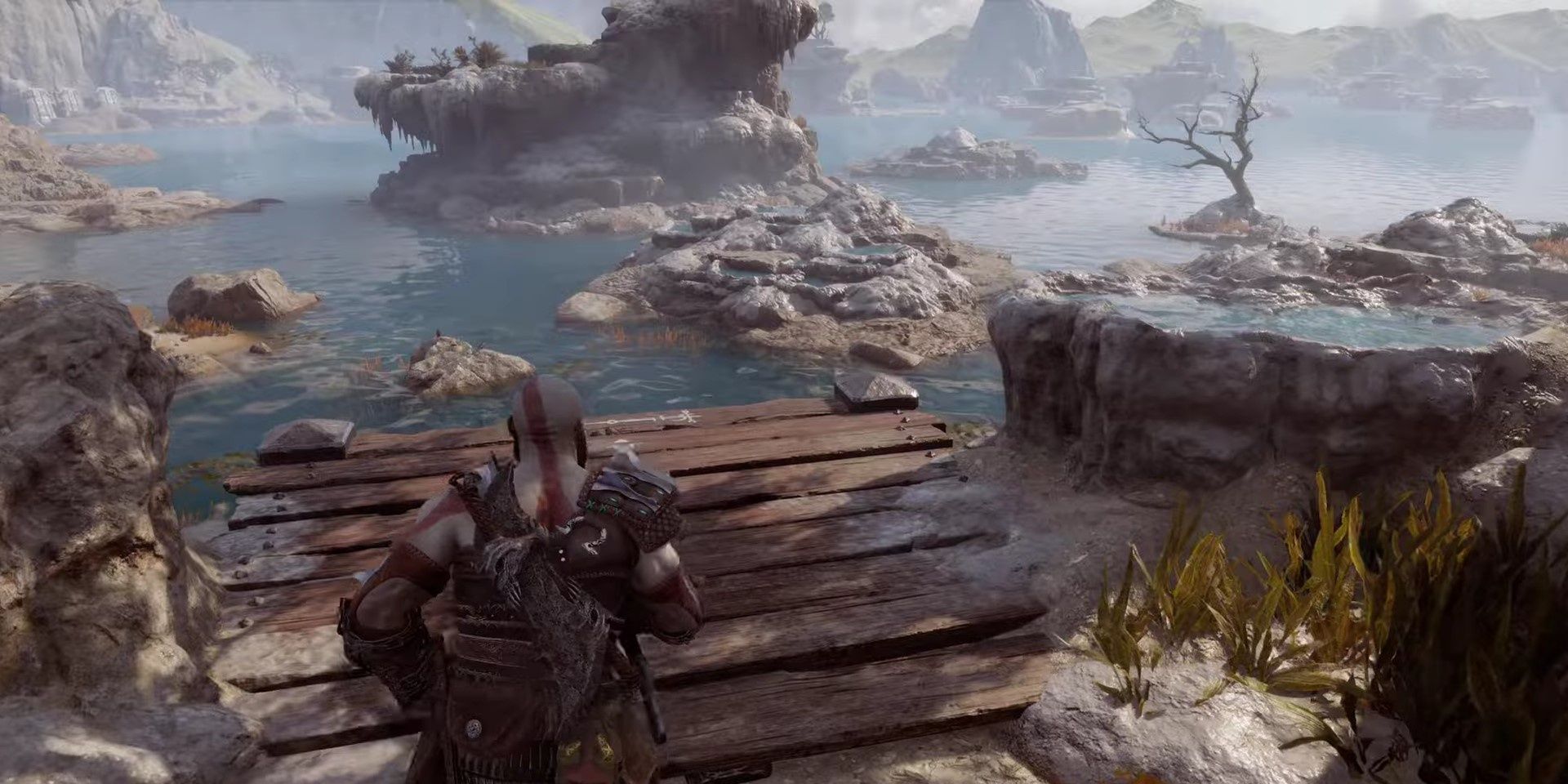 Your first stop in the realm of Svartalfheim as you embark on the Quest for Tyr is the Aurvangar Wetlands. There’s little to do with the primary objective other than to solve a quick puzzle of turning a water wheel to clear a path toward the dwarven city of Nidavellir. However, it provides some astonishing visuals and gets you back into a boat.

The Wetlands are essentially one giant river flowing through enormous weathered rock formations and brimming with the most serene blue water. The small patches of land surrounded by water that you can roam around, covered with sand and rock, make you feel as though you’re in a tropical paradise, which is very relaxing. 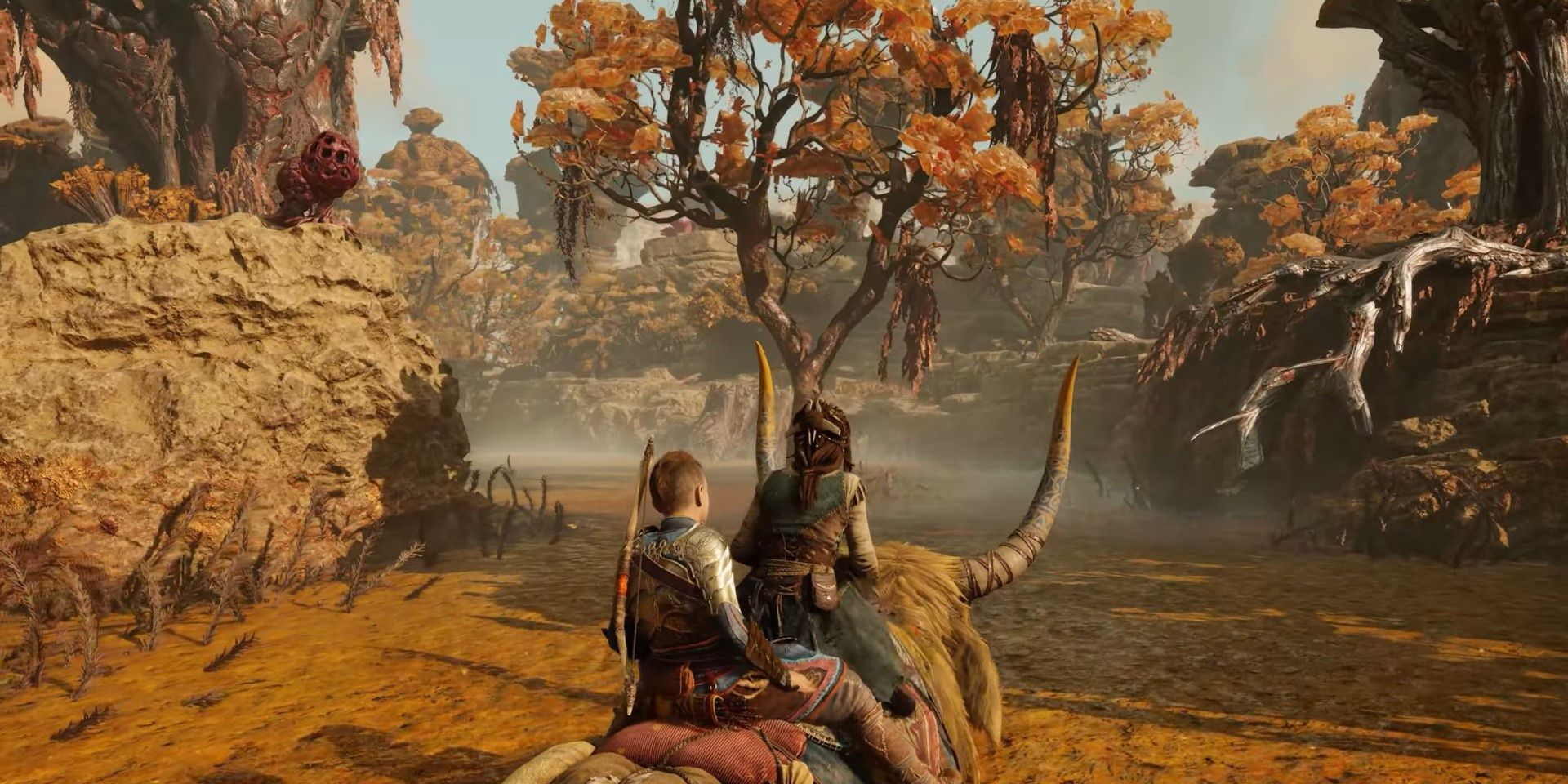 You get a sad glimpse of Jotunheim during the final phase of the previous game, in which Kratos and Atreus finally spread Faye's ashes over the peak and learn that all the giants have perished. Atreus also discovers his true identity is Loki, and that realm plays a more integral role in Ragnarok's narrative because of that revelation.

It’s there in Jotunheim, just past the bright autumn colors that fill the forest of Ironwood, that you meet Angrboda, who has a critical part in Atreus’ path to growth. And from there, you ride with Angrboda along the Vimur River, an even more breathtaking location. The swampy yellow water with the splashes of auburn and bright orange from the fungal-like trees showcase one of the most scenic views in the game. 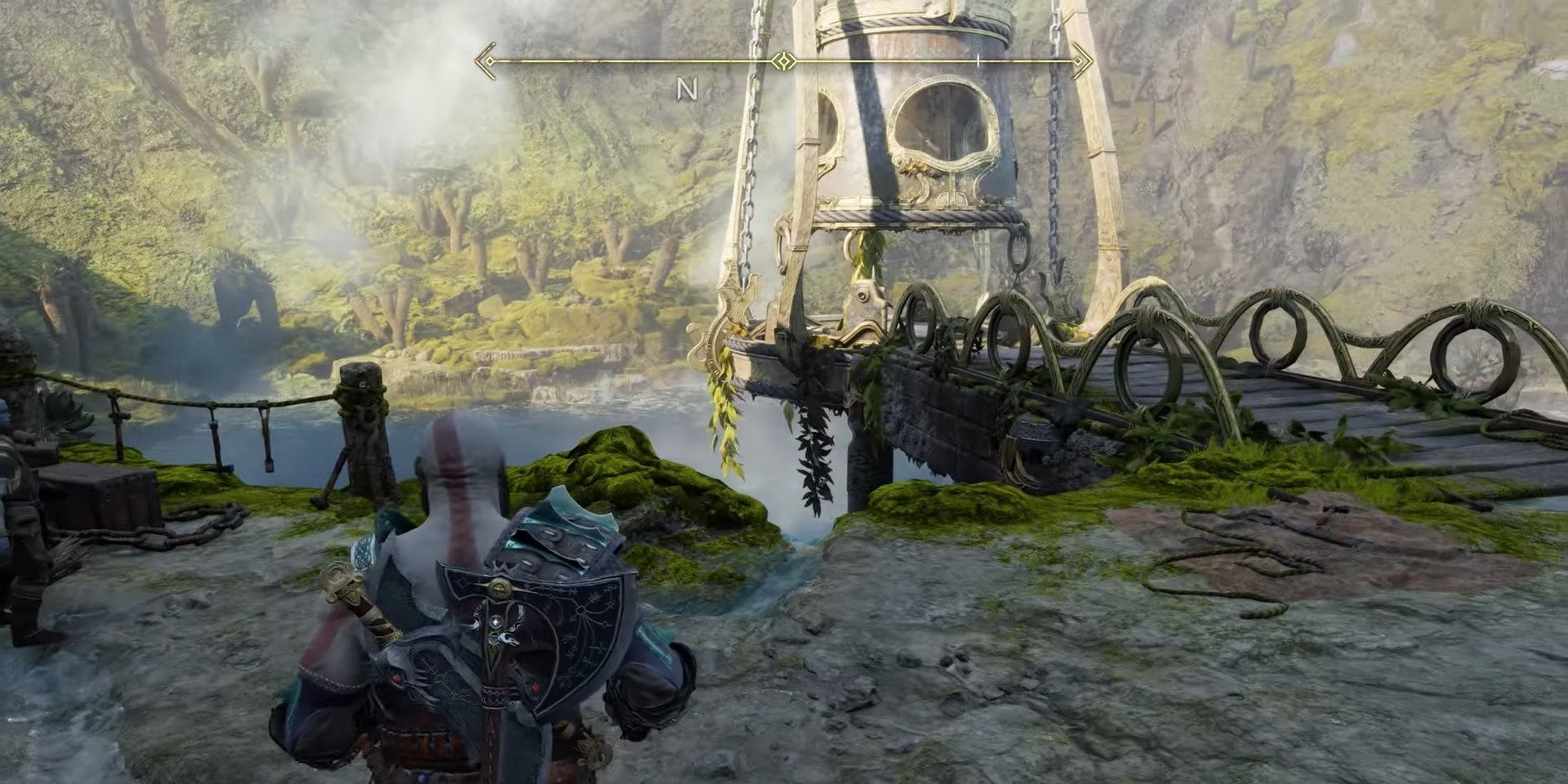 Located on the leftmost edge of Svartalfheim and West of the Bay of Bounty, The Forge is an important place you visit with Brok much later in the game. It's a majestic area situated above a body of water where the mythical mermaid Lady of the Forge crafts a new Draupnir spear weapon for Kratos, which comes with its own abilities.

It gorgeously subverts the idea you have of a forge, taking all the images you associate with the smoke and fire in smelting a weapon, a blacksmith striking an anvil, and the harsh black colors associated with the process, and transcending it into an underwater wonder. The misty air and the impeccable design of the bridge and diving bell lift add to its beauty. 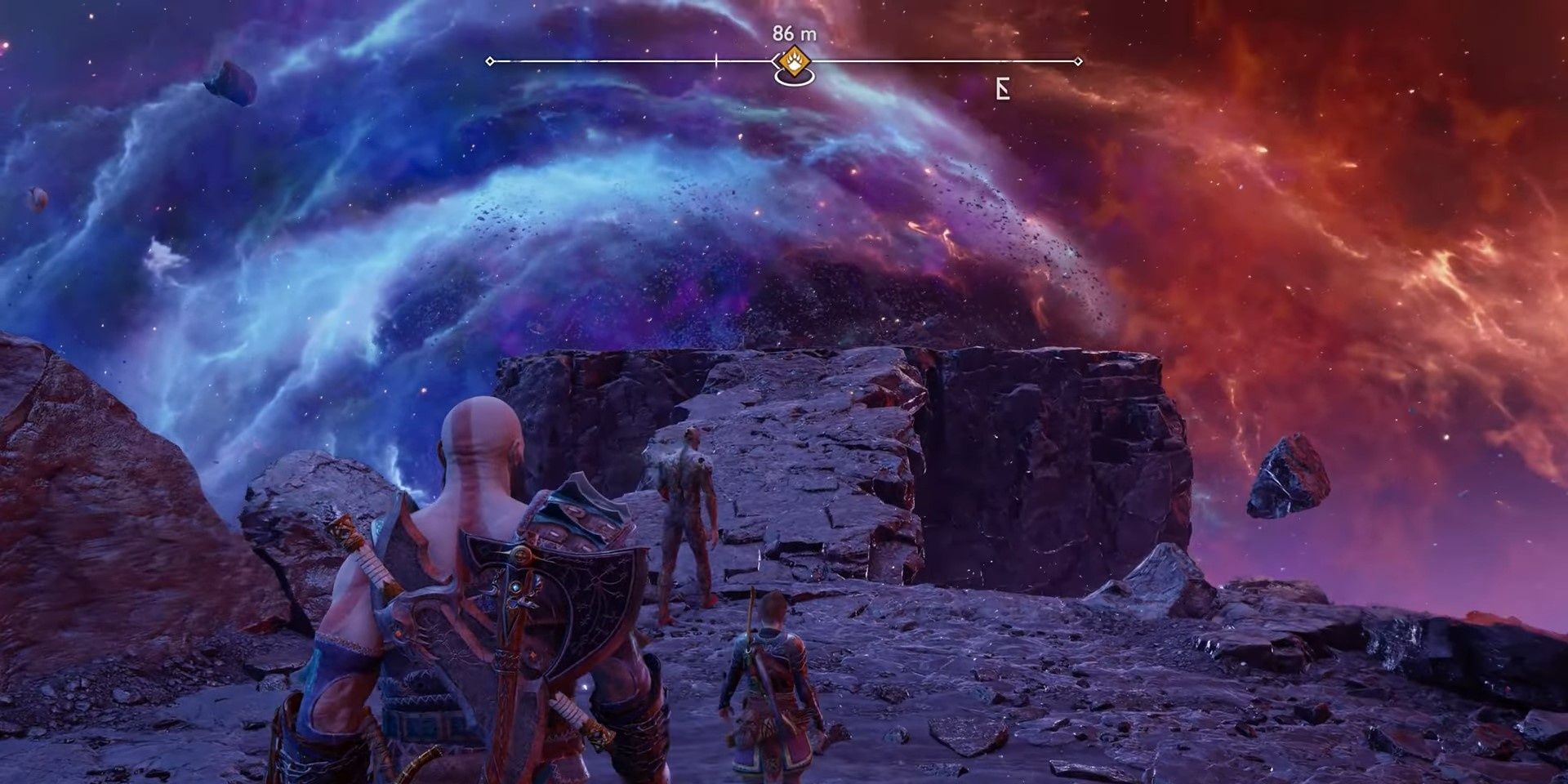 One of the final surprises of the game is allowing you to step foot into the celestial Spark of the World from Surtr's Forge in Muspelheim to get the titular armageddon beast Ragnarok on your side of the fight. And it immediately becomes the most eye-popping and illustrious area yet.

The encircling red and blue clouds of cosmic matter consume the sky, turning purple where they meet in the center, and chunks of rock swirl around. It feels unbelievably surreal, like something out of Guardians of the Galaxy.