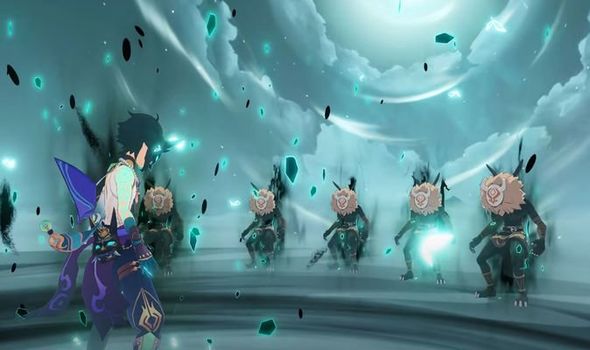 The hype is slowly building around the release of Xiao, the next playable Genshin Impact character.

Developers MiHoYo have been slowly offering more information on the Adeptus, and there’s a good reason behind it.

It hasn’t been that long since new content was released in Genshin Impact, the new 1.3 update will be arriving around six weeks since the last major patch.

And while some previous five-star character launches have proven to be disappointing, this next one is special for other reasons.

Genshin Impact’s Xiao will be an anemo polearm user, joining the likes of Xiangling and Zhongli, and making him a bit of a rarer commodity.

Xiao is also sounding like a bit of a powerhouse, with no support character stats being promoted by the MiHoYo team.

Instead, the next five-star character in Genshin Impact is going to be dishing out burst damage at high speeds, which sounds pretty exciting.

This week has seen the development team reveal Xiao’s backstory and also his ability list, which can be found listed below:

Lemniscatic Wind Cycling: Performs high-speed dash and deals Anemo damage to enemies in his path. Can be used while airborne and starts with two charges.

Bane of All Evil elemental burst: Improves a number of stats, including Xiao’s jumping ability, DMG rates, which is also converted to Anemo.

The effects end when Xiao leaves the field and also causes the character to lose HP while in this state.

It sounds like Xiao will be most useful when using the Bane of All Evil but he will need to be paired with a healer of quickly swapped out before he perishes from the HP loss.

Xiao is also being tailored as an aerial attacker, which might give a hint at what might be coming next to the game.

With most enemies set firmly on the ground, it will be interesting to see if there are plans to provide a wider variety of enemies in the future.

Genshin fans have also started gathering supplied to prepare for the launch of Xiao in February. Based on the closed beta version of Xiao, gamers will need Prosperity series talent books to upgrade his talents.

This will mean heading over to the Taishan Mansion domain on Monday, Thursday or Sunday after reaching Adventure Rank 26.

Earlier rumours suggested that Hu Tao would be released after Xiao, but this doesn’t appear to be the plan for February or March.

It has now been confirmed that Keqing will be featured after Xiao, meaning we don’t know when Hu Tao will go live.

From what has been shared so far, Keqing’s Dance of Lanterns banner is expected to go live on February 17.

Meanwhile, The Genshin Impact Xiao Banner has a release date set for Wednesday, February 3, across PS4 PC and Mobile platforms.

This will coincide with the Lantern Rite event, which will allow gamers to unlock a four-star character, with MiHoYo confirming:

“Suffice to say, Lantern Rite is a golden opportunity to experience the richness of life and culture in Liyue. Travelers who manage to accomplish all the seasonal events mentioned can earn plenty of resources and over 1,600 Primogems.

“We’ve prepared some extra little surprises to thank everyone for your ongoing support and to help you get ready for a busy year of adventuring ahead: a daily login event, in which you can claim a total of 10 free Intertwined Fate, and an event challenge offering the chance to win a four-star Liyue character of your choice.

“The grand finale of the festive period comes on the final night, when countless lanterns are released into the sky, carrying with them the wishes of Liyue’s citizens.”